In the latest chapter of the entitled people of Marin vs. cyclists, the Marin IJ reports on the recent “discovery” of a decades old riding spot. According to the article in the Marin IJ, the Marin County Parks and Open Space Rangers only recently discovered the site, known by riders as the Scott Valley Jumps.

In the article, ranger Robert Ruiz is quoted as saying, “oh my God, how did they do this?” Apparently the author of the piece, Mark Prado, is insinuating the ranger is completely unqualified to to his job, as he had to have hiked up to the site. Obviously the builders of the jumps had walked up like he did and utilized hand tools to move the soil. As the site has been around for 16 years now, and he apparently just found it, that is a direct reflection  to say he and his department’s ability to manage, well, anything.

Linda Dahl, director and general manger of the district says in the article, “We just can’t keep adding trails and trails, or pretty soon the open space looks like a plate of spaghetti.” However, there is no word on how much longer her and the parks commission board will continue to bow to the politics of anti-cycling factions, and maintain their policy of discrimination against cyclists. 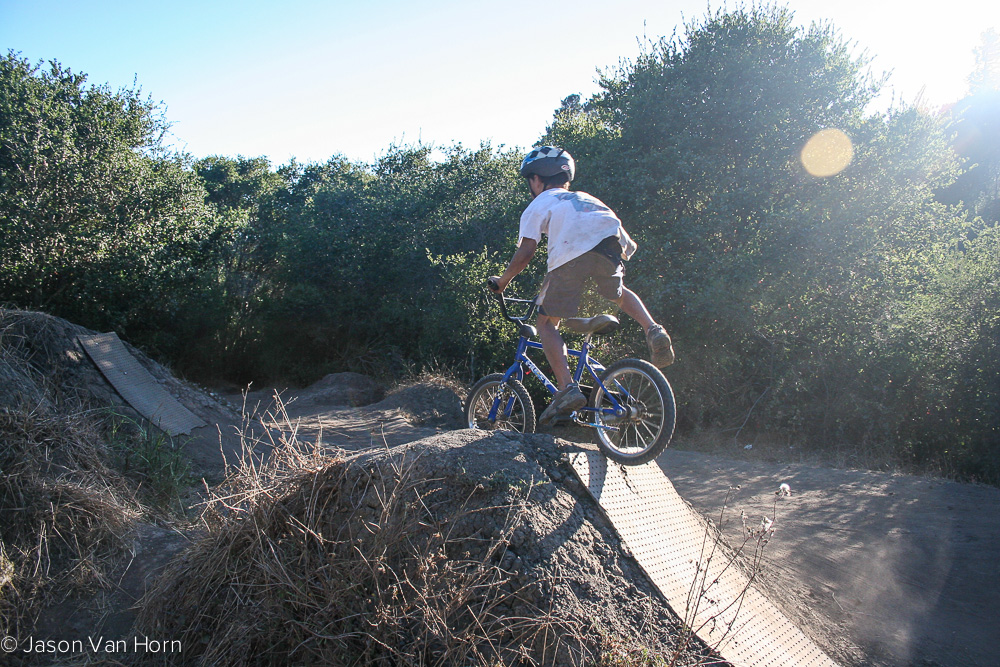 A local youngster at the site in question, also from 2005. He may very well still be riding here, nine years later.

In response, Dahl said the county plans to step up enforcement. It recently hired nine new rangers and among their duties will be to keep an eye out for illegal trails. As the county parks plan is currently being examined, the timing of this piece is .. interesting.

Curiously, the author of the piece, Mark Prado, does not comment on how their policy toward trail use effects the environment. The lack of local (legal) recreational trail opportunities require off-road cyclists to travel long distance by car in order to lawfully recreate on single track. Although he “reports” there are 270 miles of existing local trails and roads, there is no comment to how much longer they will continue with the existing land use policy and the discrimination.

There also is no comment on how said policy contributes to the increasingly poor air quality of the Bay Area. 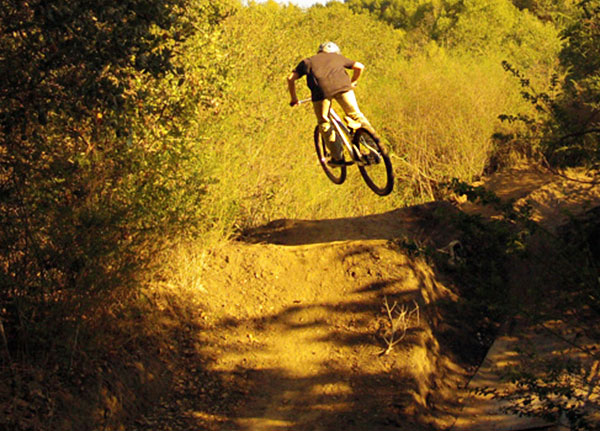 It is very possible that the piece is an utter load of crap, simply designed to continue to flame local opinion against cycling. A local mountain bike advocate forwarded this piece directed to Mr. Prado, written by one of the original builders of the Scotts Valley Jumps, now also being referred to as the Mill Valley Jumps. In his statement, he discusses talking to Marin County rangers on the site, making it clear they’re not as incompetent as Mr. Prado would make them out to be. It is republished here with permission from the writer:

I am responding to your article titled “Rogue trails, vandalism vex county park officials as plan is considered,” specifically to the focus of the story, the jump course near Mill Valley. I feel that another side of this story should be given, as the way you have applied sensationalist terms like “vandalism” and “rogue” give the reader the impression that the jumps were constructed with reckless disregard to the environment they are in. The article may also be misleading to readers in that it alternates between unrelated reports of trail building, such as the one where trees are mentioned being cut down for a trail in San Geronimo Valley, directly under a photo of the Mill Valley jumps. It is not mentioned, however, that no trees were felled for the jump course, or that it has been a part of the community for 16 years.

The story of the Mill Valley Jumps

I first came upon the location of these jumps in the winter of 1998. It was on a small plateau of land between a row of houses and a dry creek gully. The field on top of the plateau was comprised of sparse grasses, weeds, and several bushes. There was also garbage everywhere, and back in the treeline, what looked like a homeless camp made of tarps. In the middle of the field there were already two small jumps no more than a foot high each, and a couple of kids on BMX bikes who looked to be around 10 to 12 years old. I asked them if they built the jumps and they said yes. I then asked them If they would mind if I also built jumps there, as is the custom all around the world among jump builders. I assured them I would build beginner jumps that would be easy and safe for them to learn on until they developed the skill to move on to intermediate size jumps. They agreed and the next day we met back at the small field, along with two friends of mine who were BMX riders and brothers. I brought garbage bags with me and handed them out to everyone. We cleaned up all the trash and dismantled the homeless camp, back in the trees amongst the wood rat nests.

The plan for the location was to build the jumps in three “lines” down the length of the slightly downhill field, with the largest line of jumps being in the middle. The intermediate jump line would be to the right of the advanced line and the beginner jumps to the left, with all three lines ending up in a berm at the bottom that sends the riders back up the return trail to the top of the field. Most of the dirt for the larger, advanced jumps would be moved from the intermediate line, forming the space between the intermediate jumps. This would result in a terraced formation with the highest area being in the middle of the field, allowing water to sheet away over broad areas and preventing the formation of puddles and eroded drainage paths.

The construction began on a modest scale. Only a few of us out there, a couple days a week, slowly moving dirt with shovels and carefully sculpting the radius each take-off, and the angle of each landing. By the end of that first winter we had four sets of jumps that were only about three feet high each. With no more rain, we had to wait until fall to build more, and improve what we already had.

Spring and Summer were all about riding and enjoying the jumps, and we had a great time. Word about the place got out, as more riders from Larkspur, San Rafael, Fairfax, and Novato started showing up. Every winter we would gradually imrove the jumps, making some a little bigger, adjusting the angles of takeoff and landing, and adding smaller jumps and rollers for beginners, and for warming up. After a few years, riders who were on tour were showing up from all over the country, and even Canada and Europe. Professional riders were coming to film for their DVD segments. One day I showed up and mountain bike legend Gary Fisher was there with a photography team and a Pro rider doing backflips over him!

I retired from maintaining the jumps almost three years ago, but in the 13 years I was regularly out there I never met anyone who had anything negative to say about what we were doing. I met Sheriffs, police, and yes, even Marin County Parks and Open Space rangers out there at one time or another. All of which had positive things to say about the design, upkeep, and healthy community atmosphere of the project. Parents bring their kids there learn on the beginner jumps, or often just to watch the advanced riders. I’ve seen kids progress from barely being able to clear the smallest jumps, to far surpassing my own abilities. Kids have grown up riding the MIll Valley Jumps, and some still ride and maintain them as adults.

This place has slowly evolved from humble little jumps built by kids, into a positive community project. Where there was weeds, trash, and hobos, there is now a work of earthen sculpture. A medium for expression with air and bicycle. This place is not some violent scarring of the environment like when a hillside is gouged out build a house, or a strip of land is severed to make a road. The Mill Valley Jumps have gradually grown out of the ground, bit by bit, winter after winter. No trees were felled, no wood rats were displaced. The homeless camp was actually closer to the nests than where the jumps were built. These jumps are not for contests. They are not “X Games-like.” There is no music blasting there, only the sound of the birds, yardwork and construction from the nearby houses, and tennis being played at the courts across the gully.

While I do not think people should be allowed to build whatever they want on open space land, I think an exeption should be made at a certain point. When something has been created responsibly, and has become a positive part of a community for so long, I think it should be given sanction. There have been organized efforts to get public bike parks built in Marin. They have all been buried in red tape. The term “rogue” may be technically correct for the building of the Mill Valley Jumps, but “vandalism” is definitely not.

Additional images from the Scotts Valley Jumps from August of 2005; originally posted on ihatebikes.net 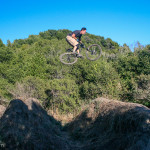 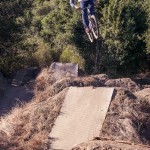 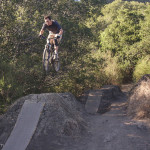 Also conspicuously missing from the conversation is a public comment from IMBA, the world wide advocacy organization founded locally. Although they continue to aggressively solicit financial contributions from Bay Area mountain bikers, it is unlikely we’ll see a comment from them on record. However, a Facebook group Save the Scott Valley Jumps has been established in an effort to save and protect the jumps. 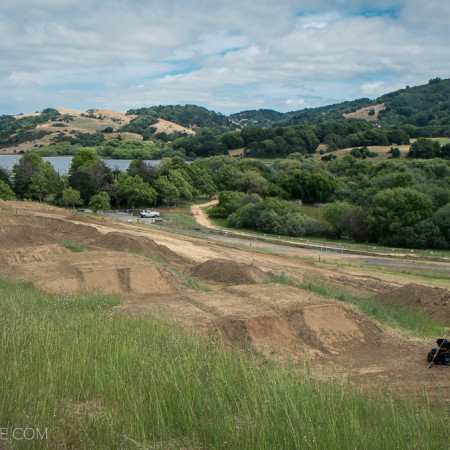