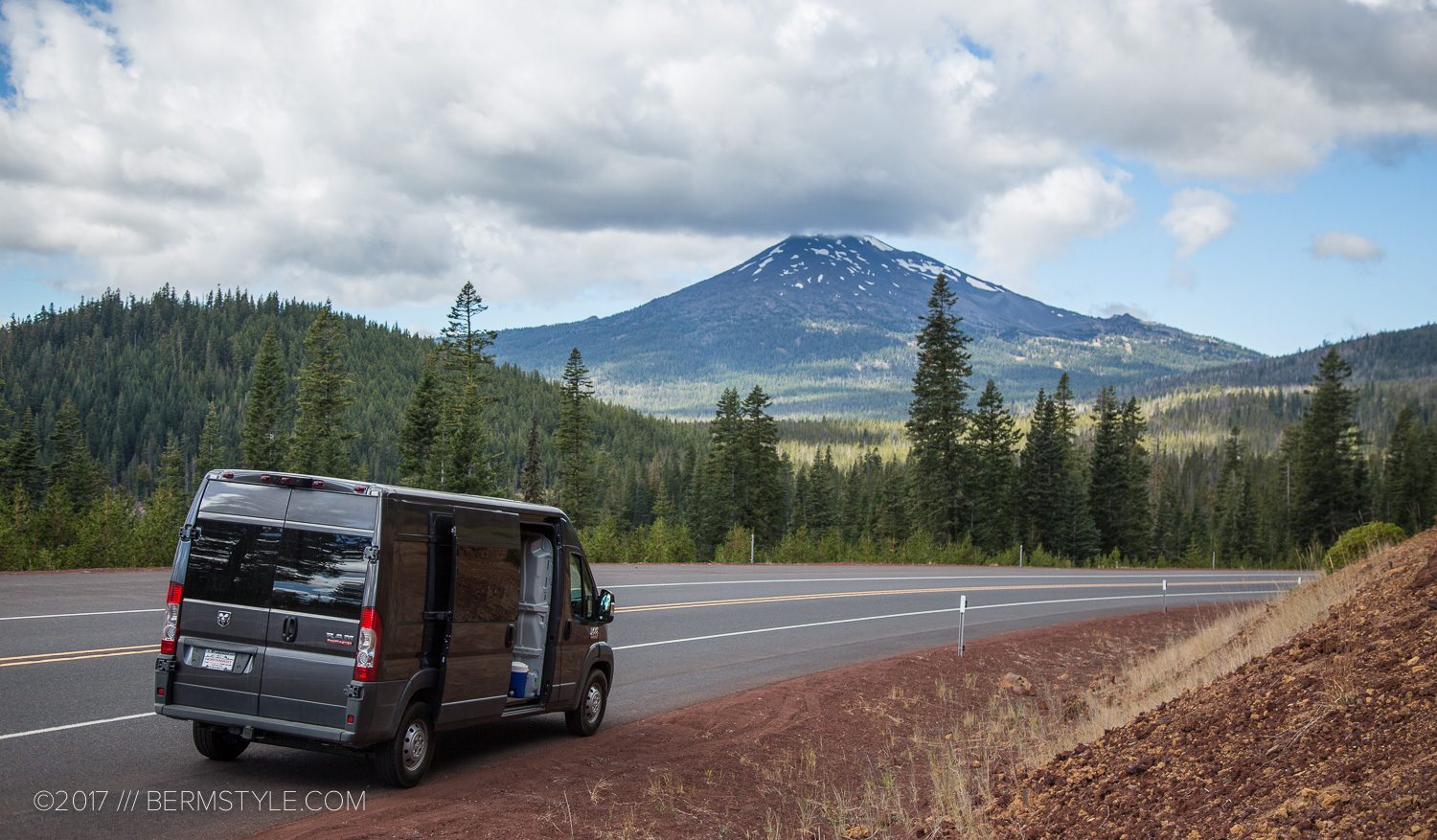 For the last two to three years I’ve been working on a plan that would enable more riding in epic destinations. The solution: buy a van, transform the inside into a stealth camper, and join the #vanlife. It’s easier said than done— though we could afford a van living in the Bay Area, finding a place to store it safely changed the equation as well as the cost of ownership. And that didn’t take into account the need for a place to work on it. 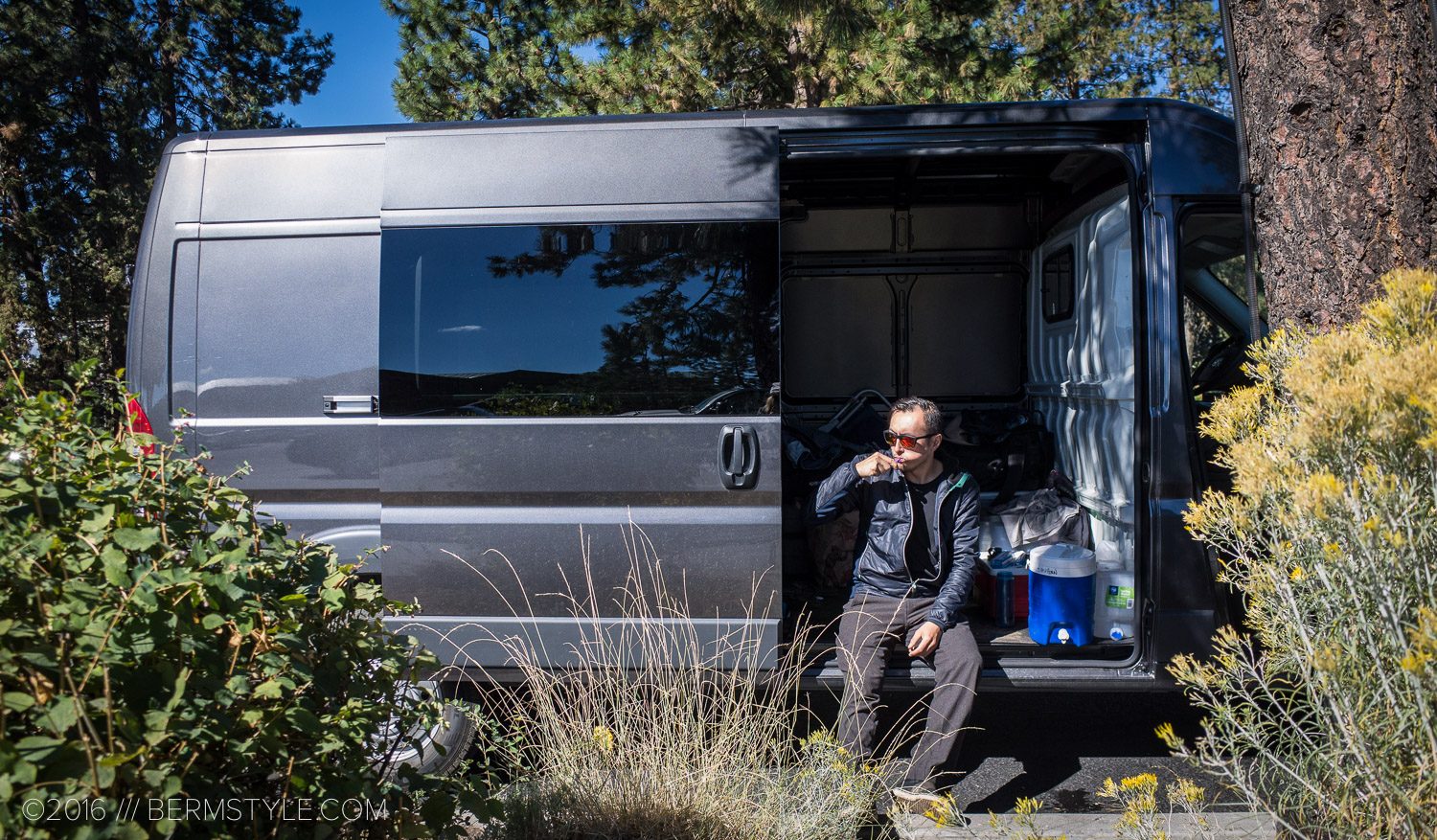 Our first go at a weekend of van life. This is actually the Safeway parking lot in Bend, Oregon.

The solution? Move. Relocating back to Portland, I spent countless hours of researching vans and stealth camper conversions before pulling the trigger and buying our van. After reading numerous reports and hearing first hand experiences of broken down Sprinters, I decided to go new. Although it would cost more, trying to find a used van offered its own set of challenges, and I didn’t want to face potential mechanical issues. 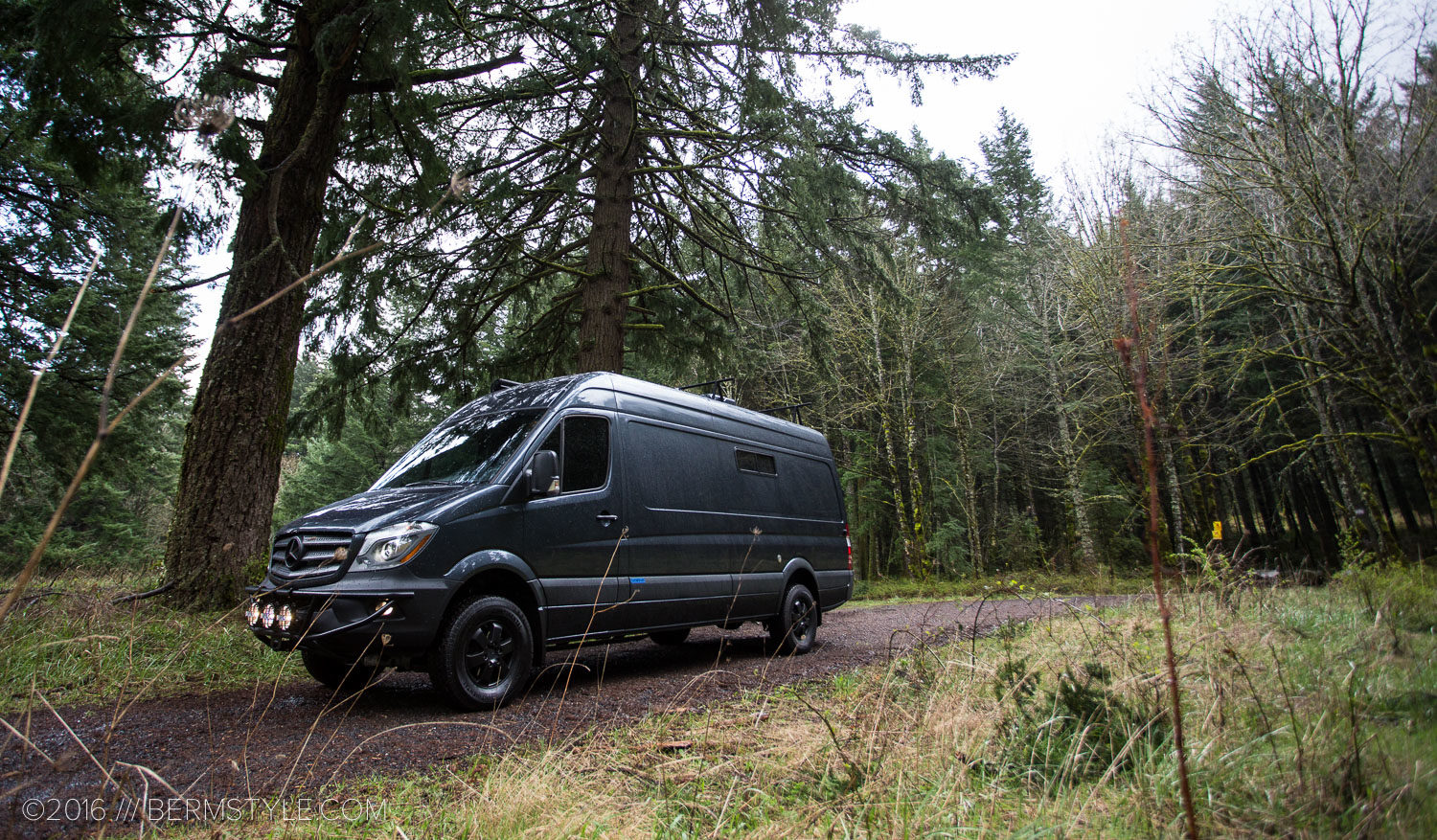 A custom Sprinter van conversion from Outside Van.

Buying a van and doing the research into a DIY conversion will absorb a massive amount of your time. I’ve completely lost track of the number of hours I’ve spent researching blogs and posts to find a better/easier/cheaper way to do any of the things needed to make it comfortable and or livable.

The first challenge was simply deciding on which van to go with. That said, going new simplified things a bit as there aren’t a lot of options to choose from. We knew we wanted a high roof model so we could be comfortable standing, and being mountain bikers, we wanted to store bikes inside the van for security purposes. We also travel with camera gear, which will require additional consideration. 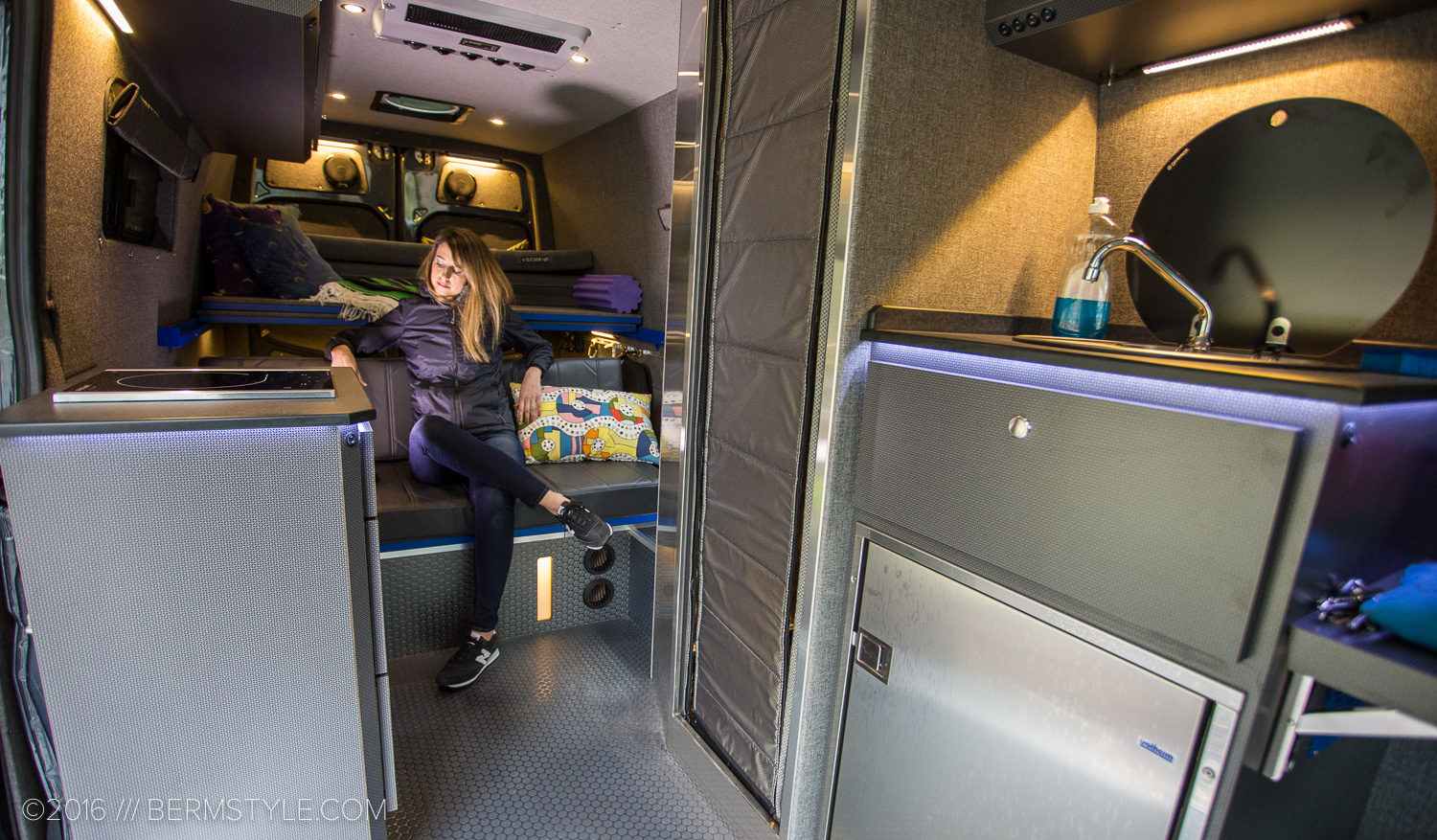 This converted OSV van was nicer than RVs. Our dream van for sure.

As part of our research, we reached out to local van outfitters Outside Van and Van Specialties. Both outfits perform amazing van conversions in any configuration imaginable.

The most common design layout for mountain bikers is (see our post on this amazing Sprinter Conversion by Outside Van) to build an elevated bed platform with space for bikes and gear underneath. From there, you can chose any number of kitchen/ galley and storage configurations, with power, heaters and even internal and external showers. They do an amazing job optimizing every square inch of space. 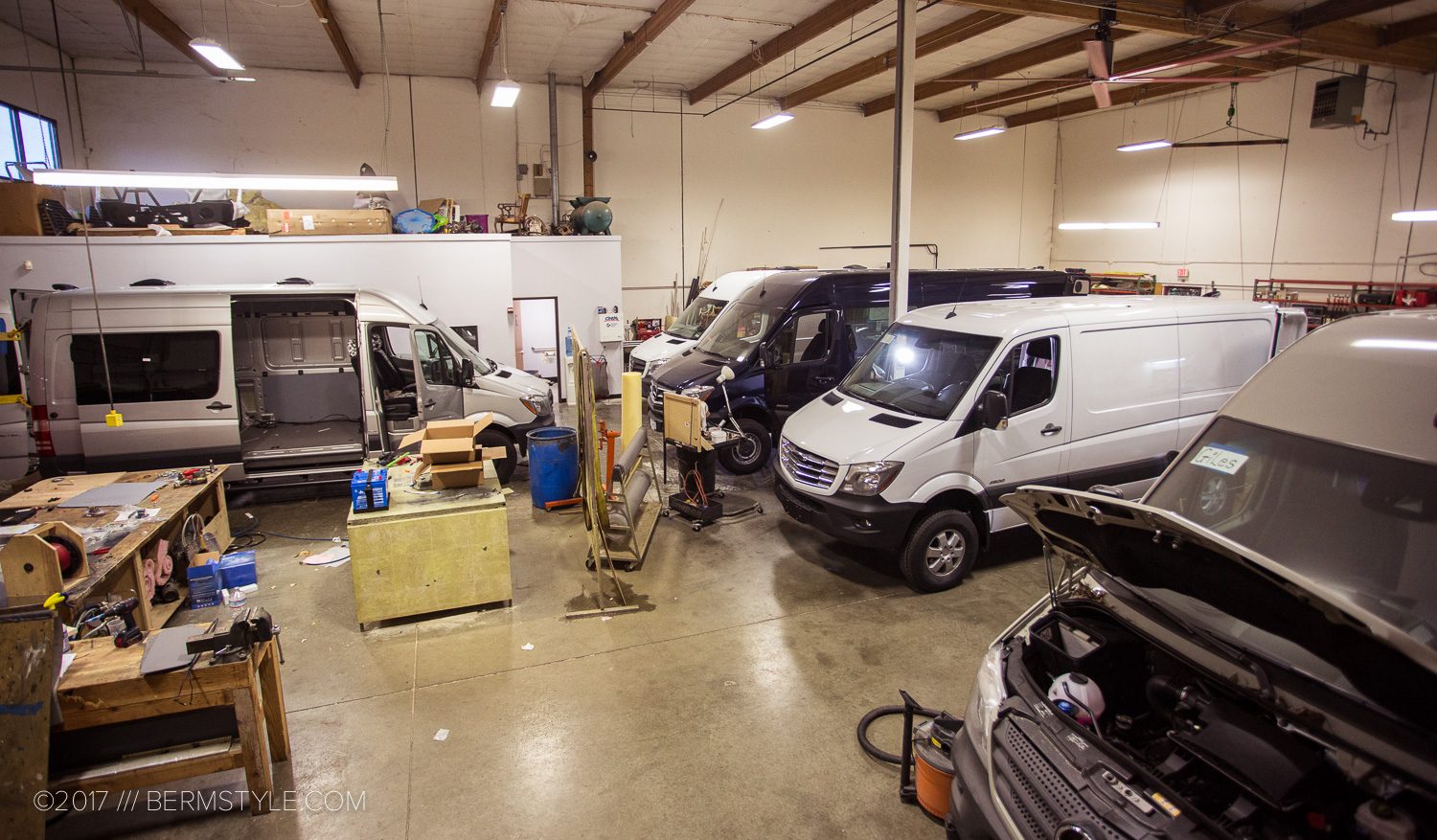 Their services are so high in demand waiting lists are backed up for months. Still, for riders with the resources, it’s the fastest way to get on the road and off to amazing adventures.

The most common options utilized for van conversions by the pro-level outfitters are:

Sprinters are the most common, but they also feature that premium price tag. I decided to rule it out on cost, as well as some feedback from Sprinter owners that have faced mechanical issues. Van shopping came down to choosing between the Ford Transit and the Dodge Ram Promaster. 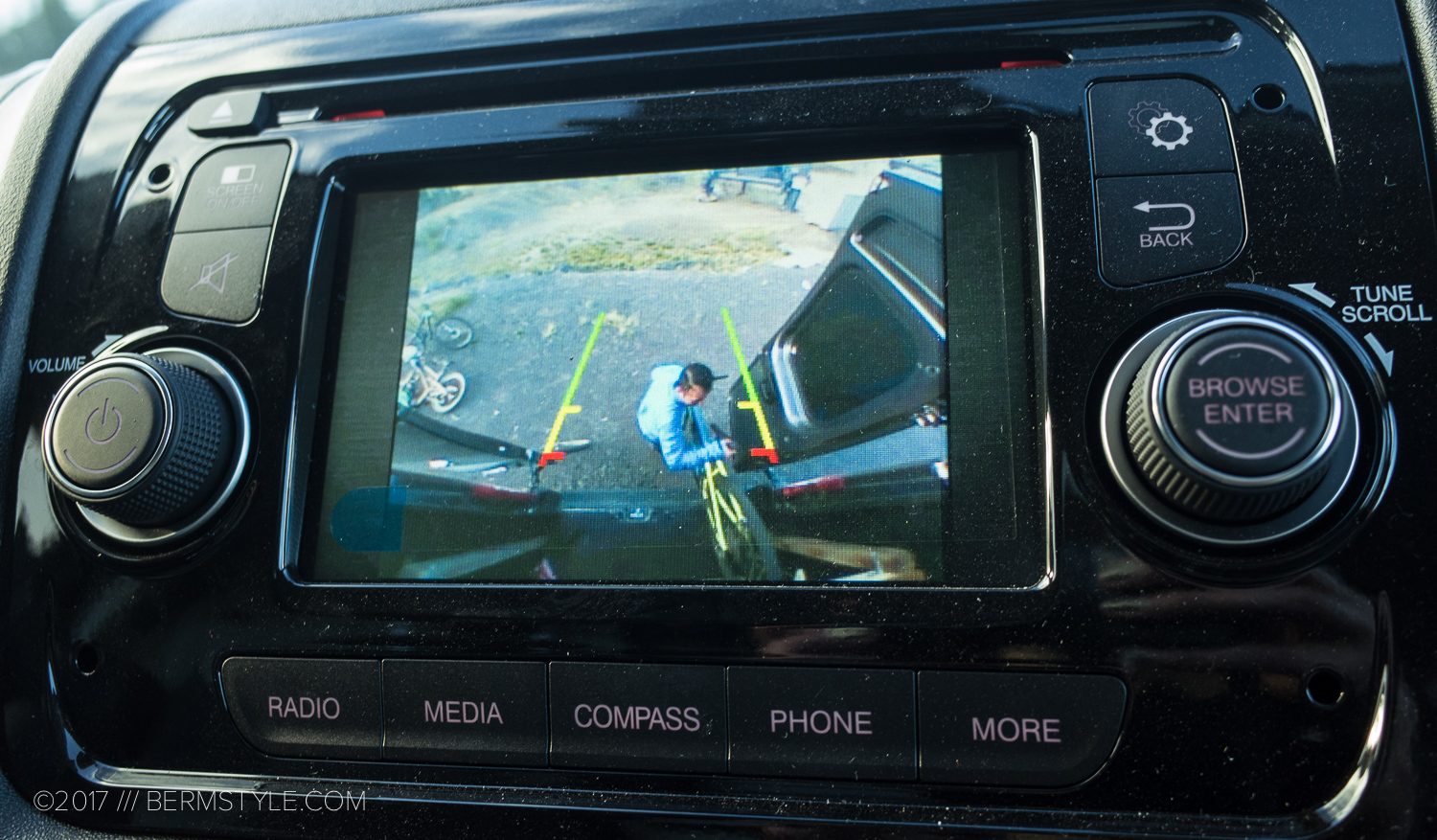 Vans are big machines. The rear camera is a good idea.

I chose to go with the Promaster, primarily because it was front wheel drive. I also debated heavily on the fuel type — gas vs. diesel. The overall cost of ownership seemed to pan out, so I ended up deciding on gas as the initial cost was less, to keep my monthly payments down.

I checked around at a number of dealerships to see if there was one configured close to what I wanted. There were a few, but I really didn’t want a white van. It seemed way too generic, and although there are benefits to having a van that looked like a fleet vehicle, we weren’t planning to live in it full time, so the stealth camping factor wasn’t a priority. Plus, if I was going to buy a new vehicle, I decided I should get a color I was stoked on. 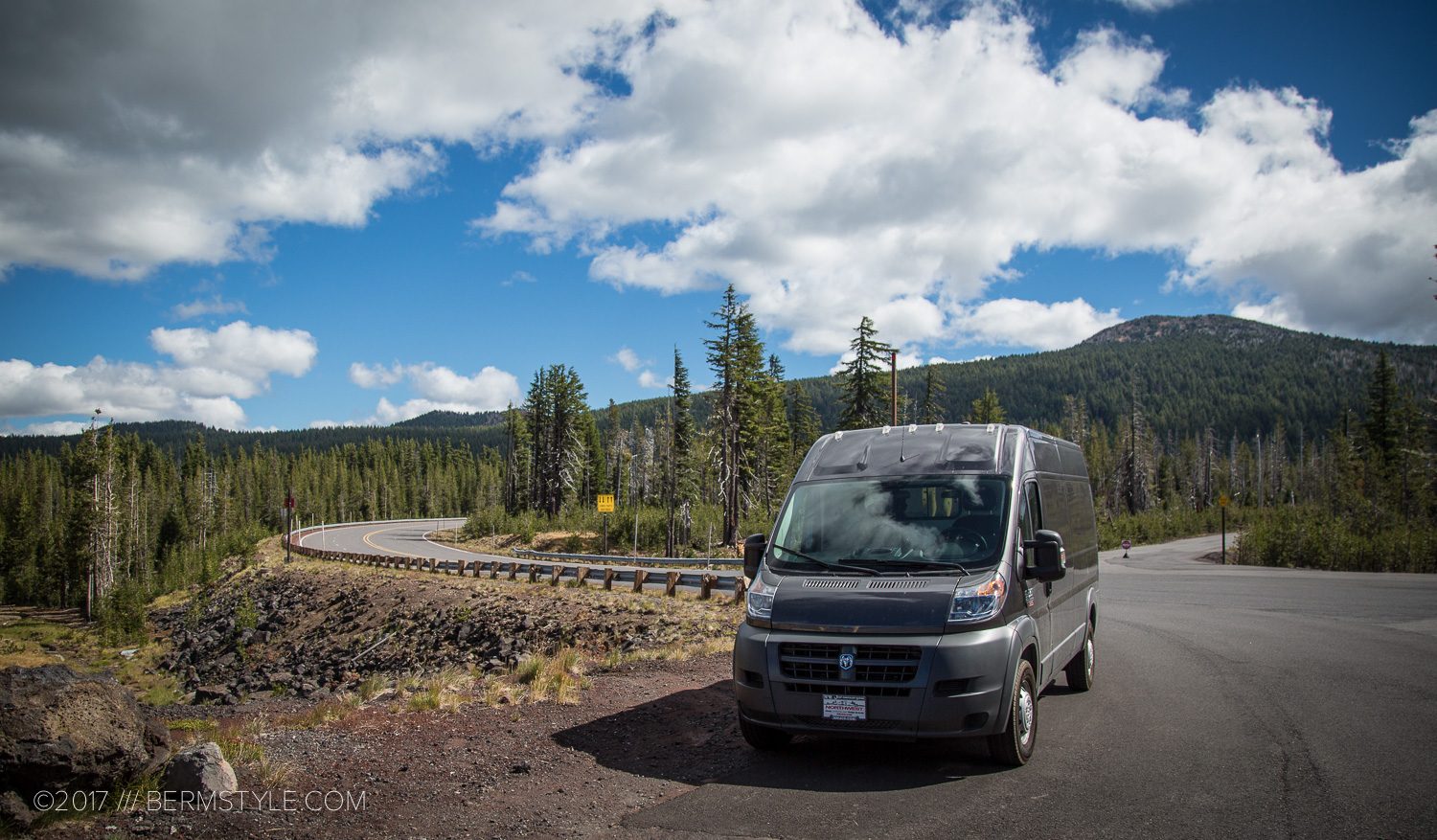 Once you get a van, you start taking photos of your car parked at places with mountains in the background.

I finally settled on a dealership that had a van listed with the window options, package and color I was hoping for. The downside was that it was in transit. If I wanted it, I needed to go down and put a deposit on it. So I did and the waiting began. It ended up not being a week, or even two as promised, but closer to 3 or 4, but in the end if finally arrived— right as summer ended.

One thing I neglected to do was consider the warranty packages. This aspect of the buying process caught me by surprise and I probably spent a bit more than I initially planned. (I’d recommend reading up on this if you’re in the market so you have more bargaining power) I tried to wash down the buyer’s remorse with the knowledge I had extra peace of mind. Assuming someone doesn’t rear end us, or something stupid like that, which seems to always be a looming possibility with the crap driving on our highways. 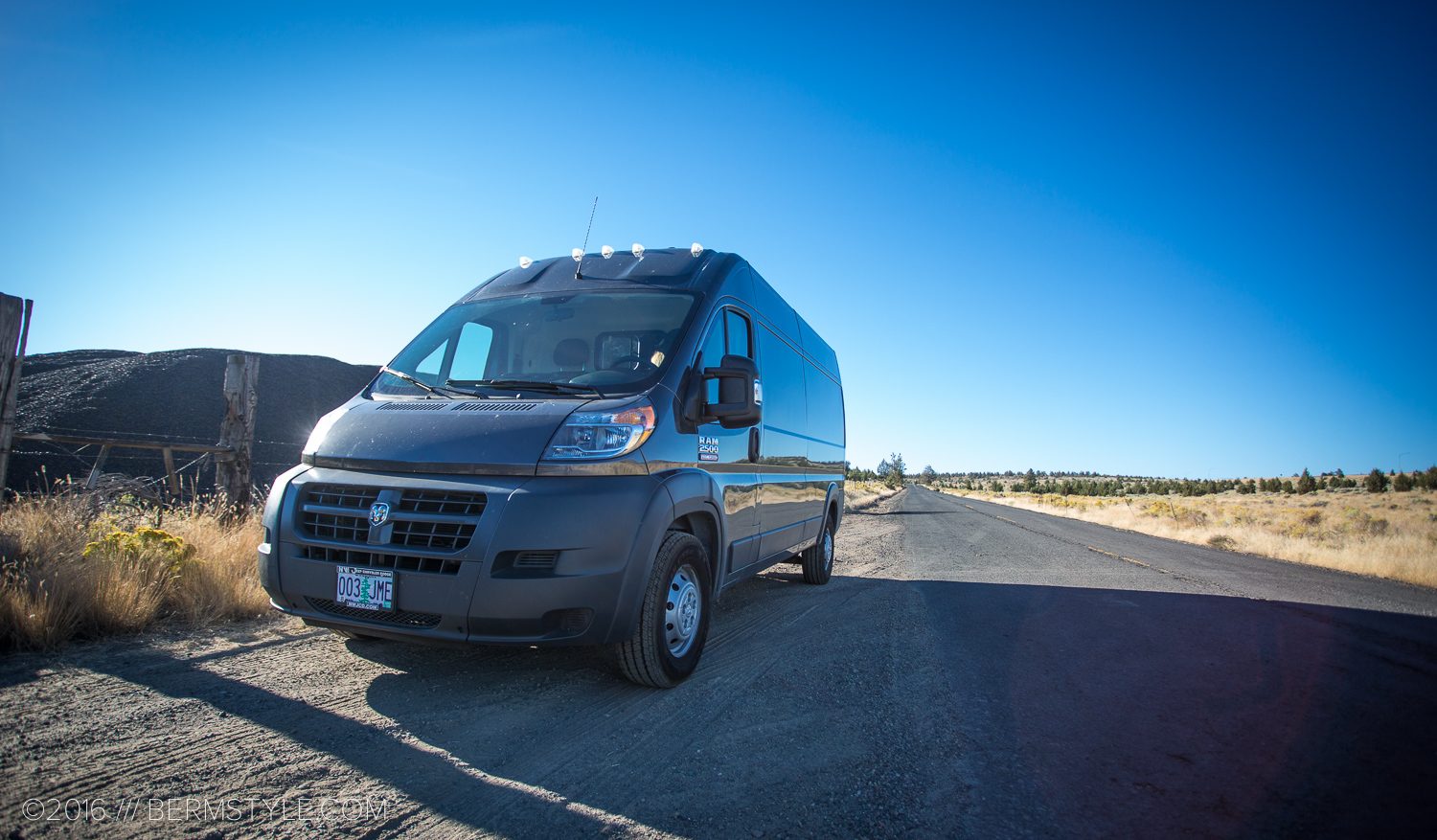 We’re actually rather fond of the look of the Promaster

Also, now that I’ve owned a Promaster for a bit, I wish I had spent a bit more time test driving them. Though I’ve driven a Sprinter, I hadn’t test driven a short and long wheel base model back to back. We chose the 159 wheel base for livability on the weekends, and as a bike commuter, I don’t actually drive during the week. (plus we still have our other vehicle.) Driving and parking it in town can totally suck though; you have to be very careful with your turn radius, and good luck turning around quickly in a tight spot. Though the inside space is be nice to have on adventures, it is not fun to park in town as a daily driver. 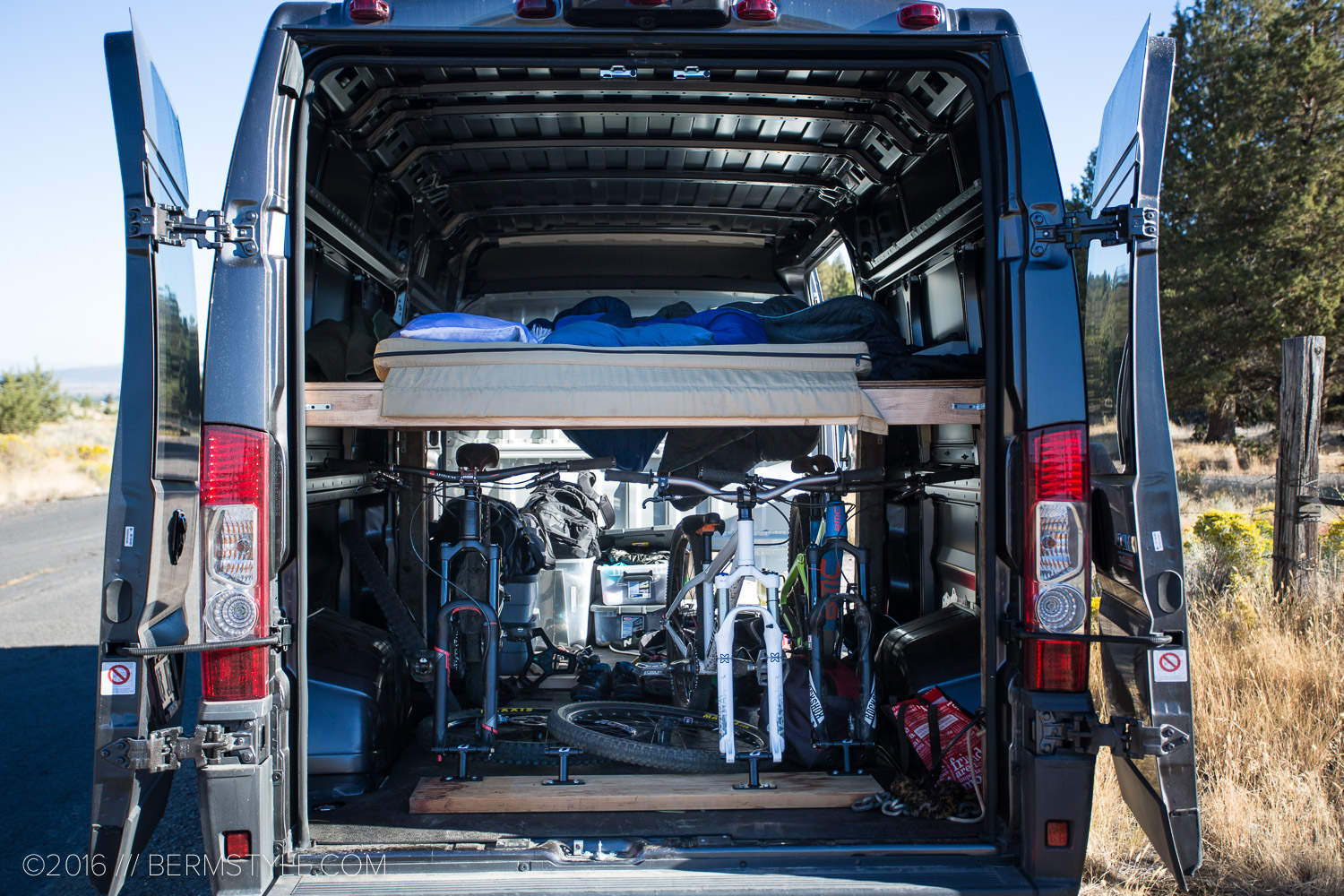 Bare bones comforts with a crude bed and a few bike mounts from Kuat.

The start of the build out

Buying a new van and a house in the same year comes with a major downside. We’re now house/van poor, which meant extremely limited resources to build out our dream van. I had initially planned to contract out many aspects of the build. However, faced with van as well as house payments, it was clear this buildout would be stretching out over years and not months. With a limited DIY budget I’m going to have to acquire a lot of new skills. Thankfully there are limitless resources online when it comes to van conversions.

Since we got her at the end of summer, we just decided to head out and go, after I spent a weekend throwing together an extremely basic bed platform. My platform was actually quite horrible and poorly thought out, but it survived 3-4  overnight trips while we got to know her. 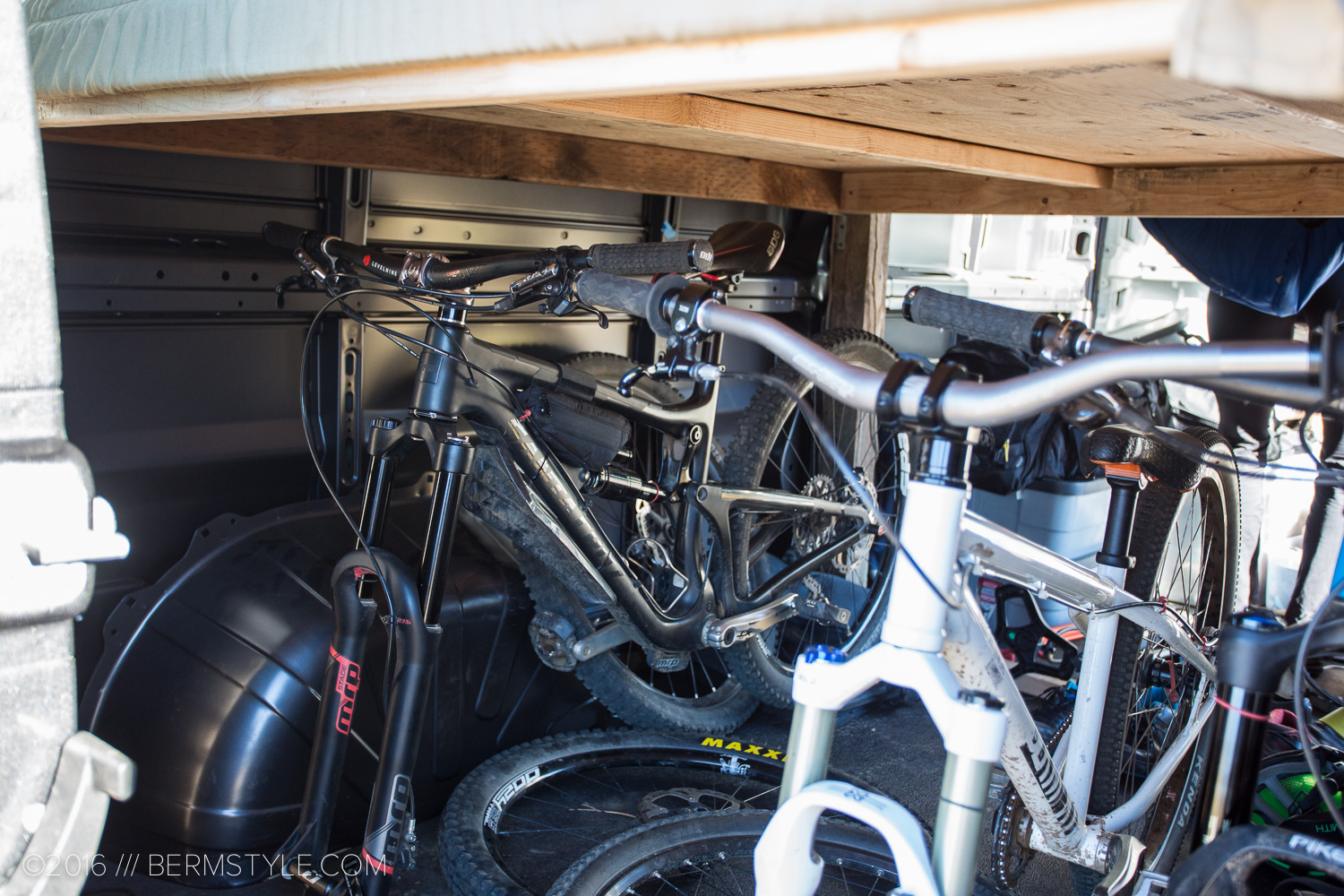 Forty inches of space offered plenty of clearance for our trail/ enduro bikes.

The upside of screwing a quick bed platform together quickly was I had the opportunity to test out what I thought was the optimal bed height for storing bikes underneath, and retaining comfort topside. I settled for about 40″ of clearance, as that should accommodate a downhill bike when I eventually acquire another one.

As the legs of the bed were pretty sketchy, I was motivated to get moving towards a real conversion. This winter has been rough, but it was clear I have my work cut out for me in order to get the van trip worthy by spring. 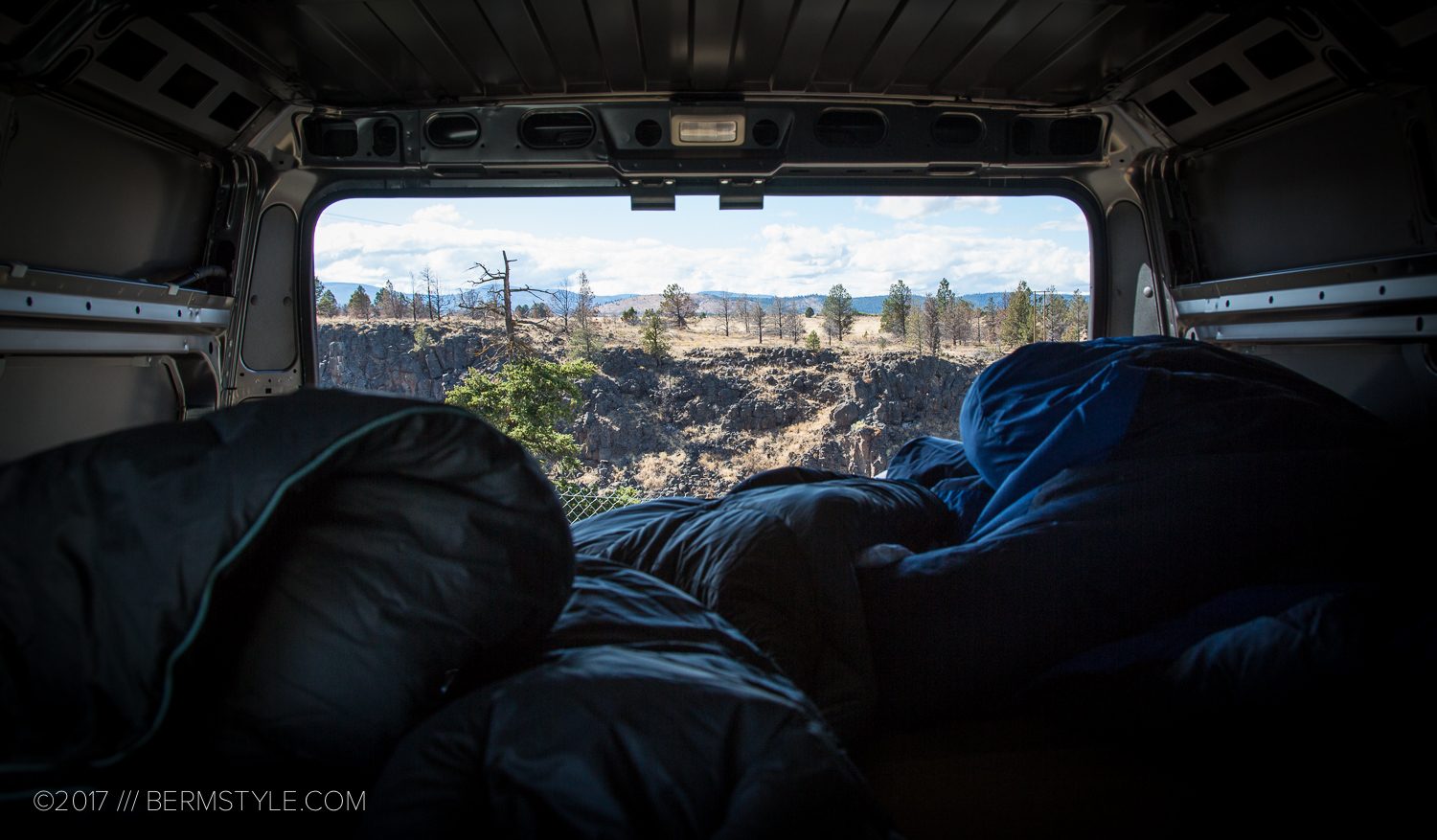 Our first cliche out the back shot

I had hoped to have a contractor set up batteries that would be charged by the alternator, that would power a fan, lights and a small fridge. That’s not going to happen this year, due to a lack of budget. I’m going to have to DIY everything for the time being in order to keep costs down.

Another thing we learned, is that we prefer the use of tubs over gear bags and packing cubes. Though we’d ideally leave gear in the van so its always good to go, it may not be the best idea living in the city as weekend van warriors. We’ll still want to pack some stuff in and out and find a solution that facilitates that. Packing cubes are great for gear bag organization when you’re living out of a car, but we now have a lot more space to play with. Once I get shelves and storage plans dialed in, we’ll need to decide on what size and brand of tubs to utilize and build around it. 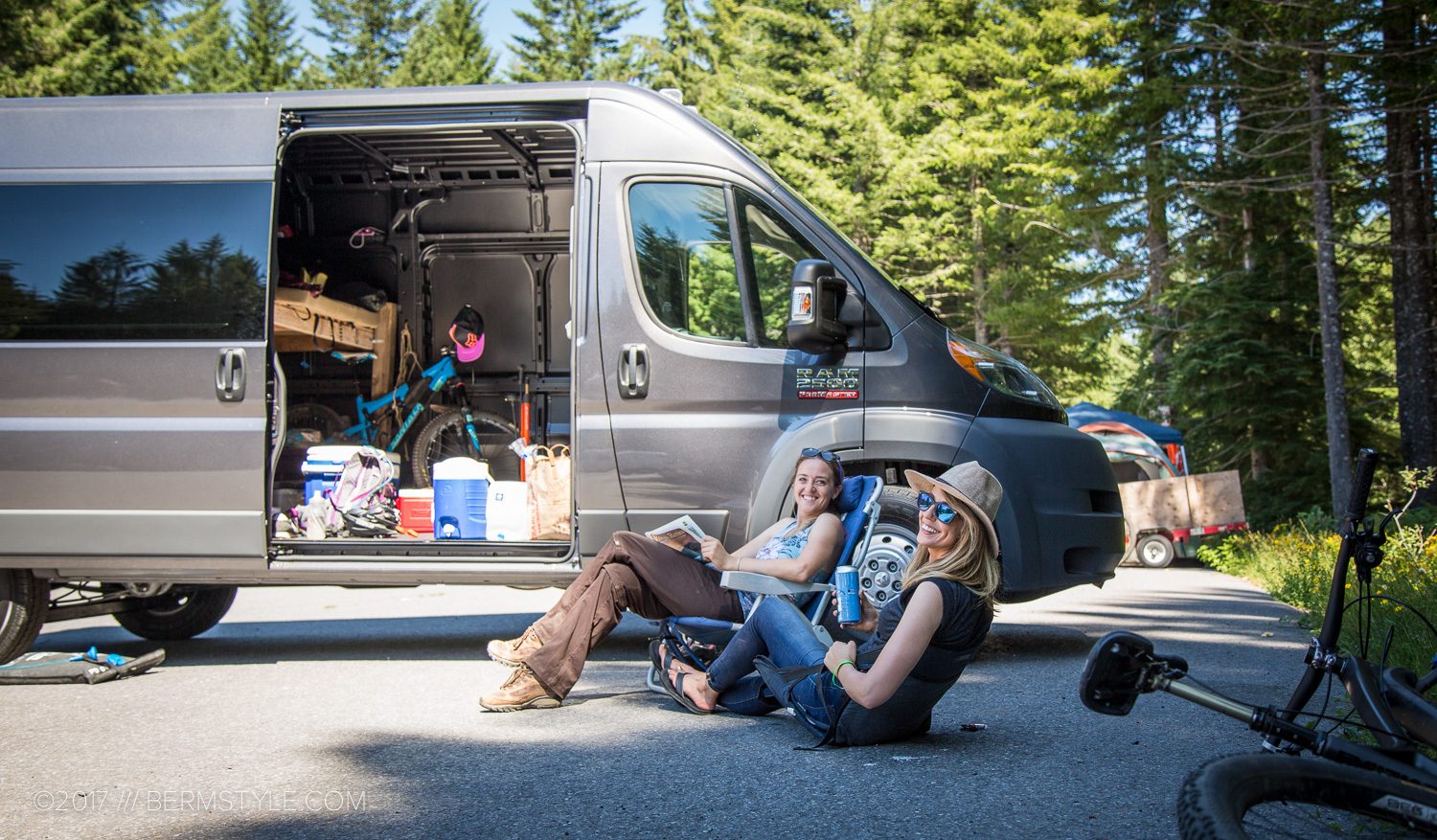 My priorities by spring have shifted to getting a basic set up consisting of:

Next: VanLife Part 2 – the Build Out