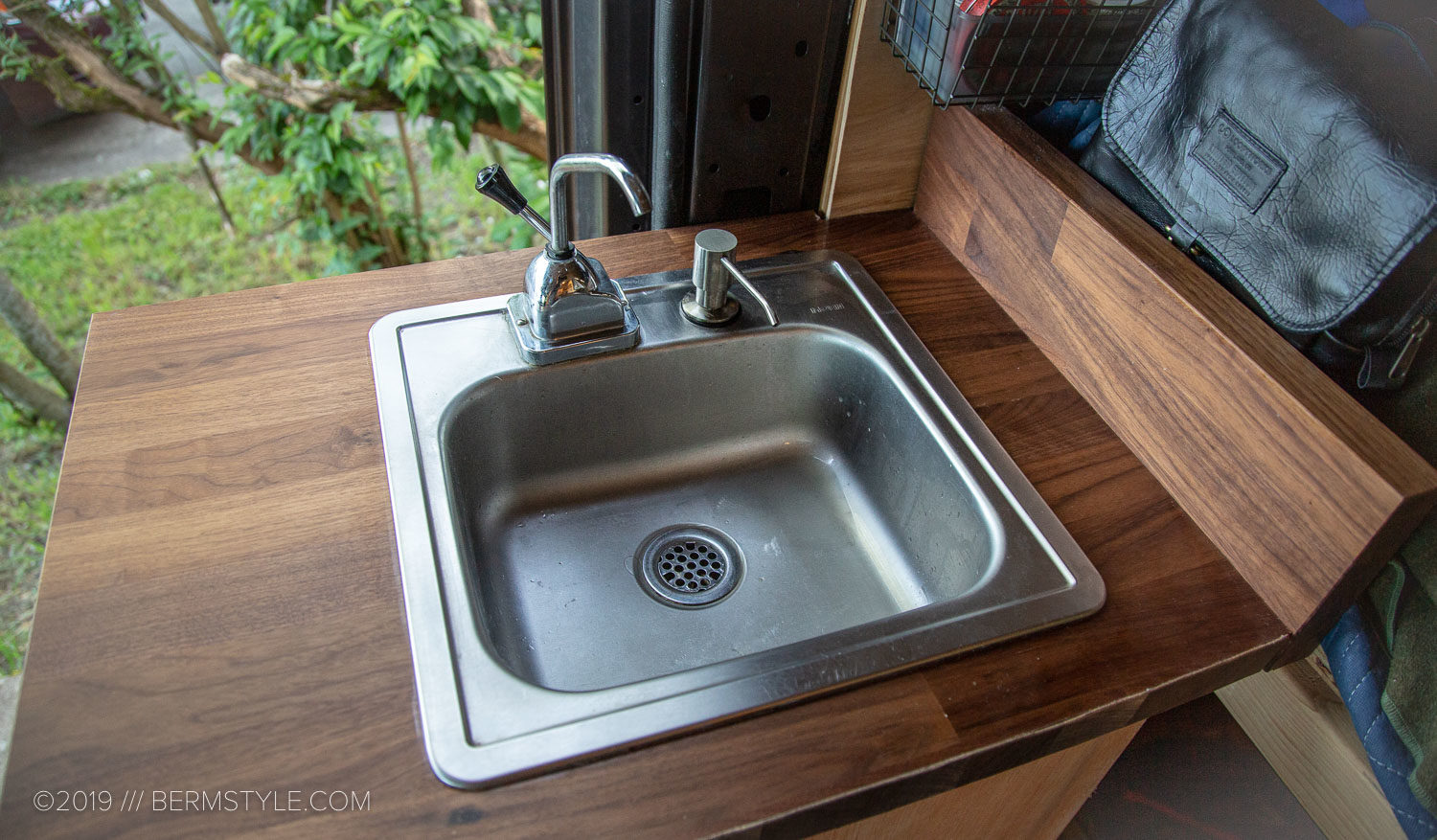 This spring, the sink in our van received a big upgrade.

When it comes to my DIY van conversion, the process has been anything but glamorous. Buying a house and a van in the span of a year has left us financially limited in terms of the buildout. That’s ok though, my priority has been to go straight to having fun on adventures. Everything done to make the van a mobile base has been on a meager budget. Not just financially, but in terms of time as well. Building out a van into a tiny home on wheels is extremely time-consuming, hence the high cost charged by van outfitters.

On the upside, doing it myself has been a learning experience well worth the time and trouble. Although my build is a bit unimpressive compared to the beautiful conversions we regularly see on the road, I’ve learned that with patience and a ton of sanding, it’s possible to get livable results that are more than usable. 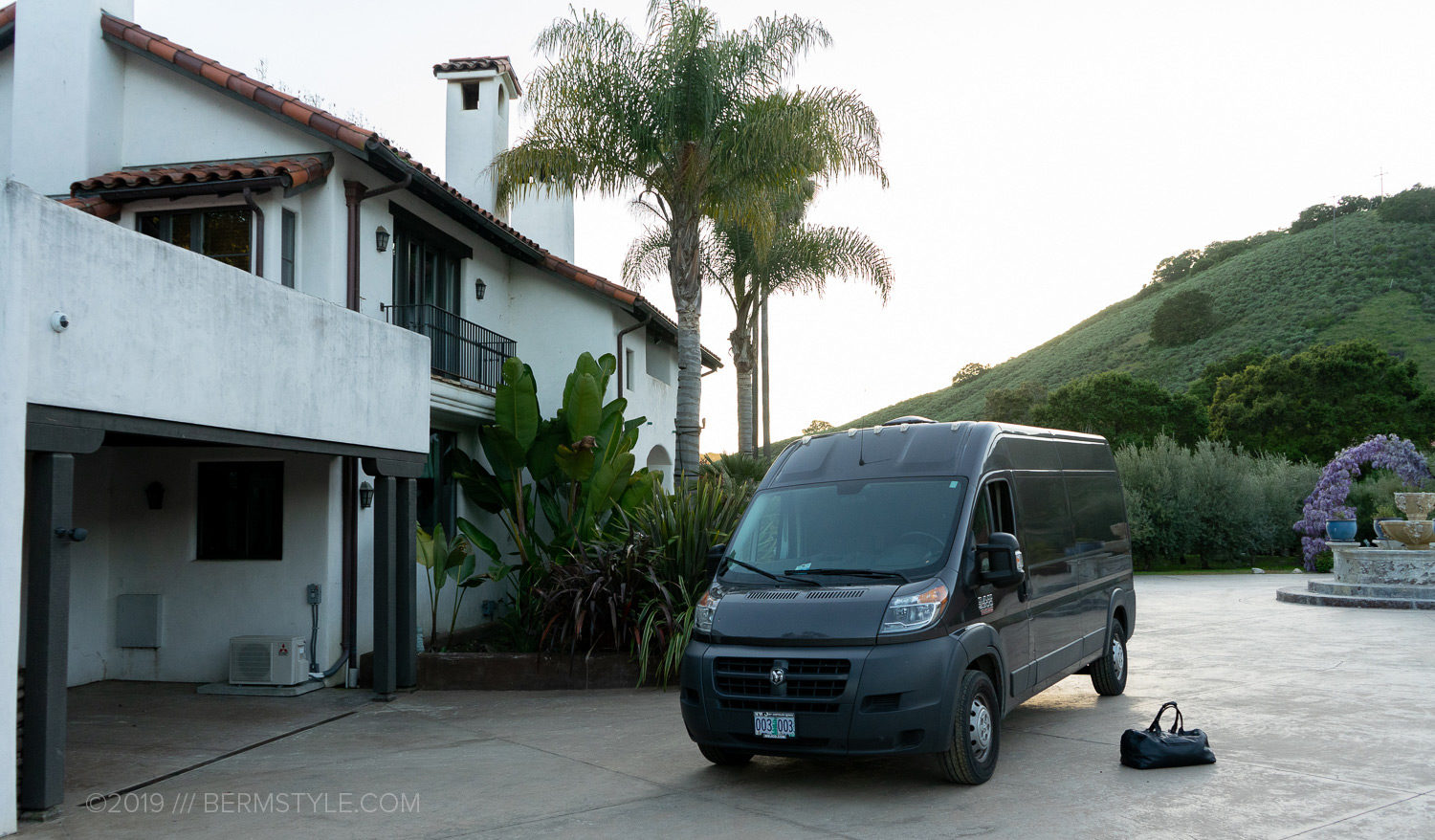 It was just over a year ago when I pulled everything out of the van and gutted it to add walls and a floor. In what’s become a yearly tradition, I drop practically everything in order to prep the van for a spring road trip. (documented here in “VanLife Part 4″) After a year rolling in the setup, I wish I had done a few things differently. I had gone with some very thin wood for the ceiling panels, and I should have spent a bit more on those materials or tried hard to source recycled wood.

The wood Home Depot flooring I found for very little on Craig’s List is a light color, and I wish it was anything but. It almost always looks dirty, especially coming in after a bike ride. The broom is in use constantly, just to make things a bit tidier. What bothered me the most though, is how every photo of the van shows off my poorly assembled sink and the stuff we store below it. It was overdue for an upgrade. 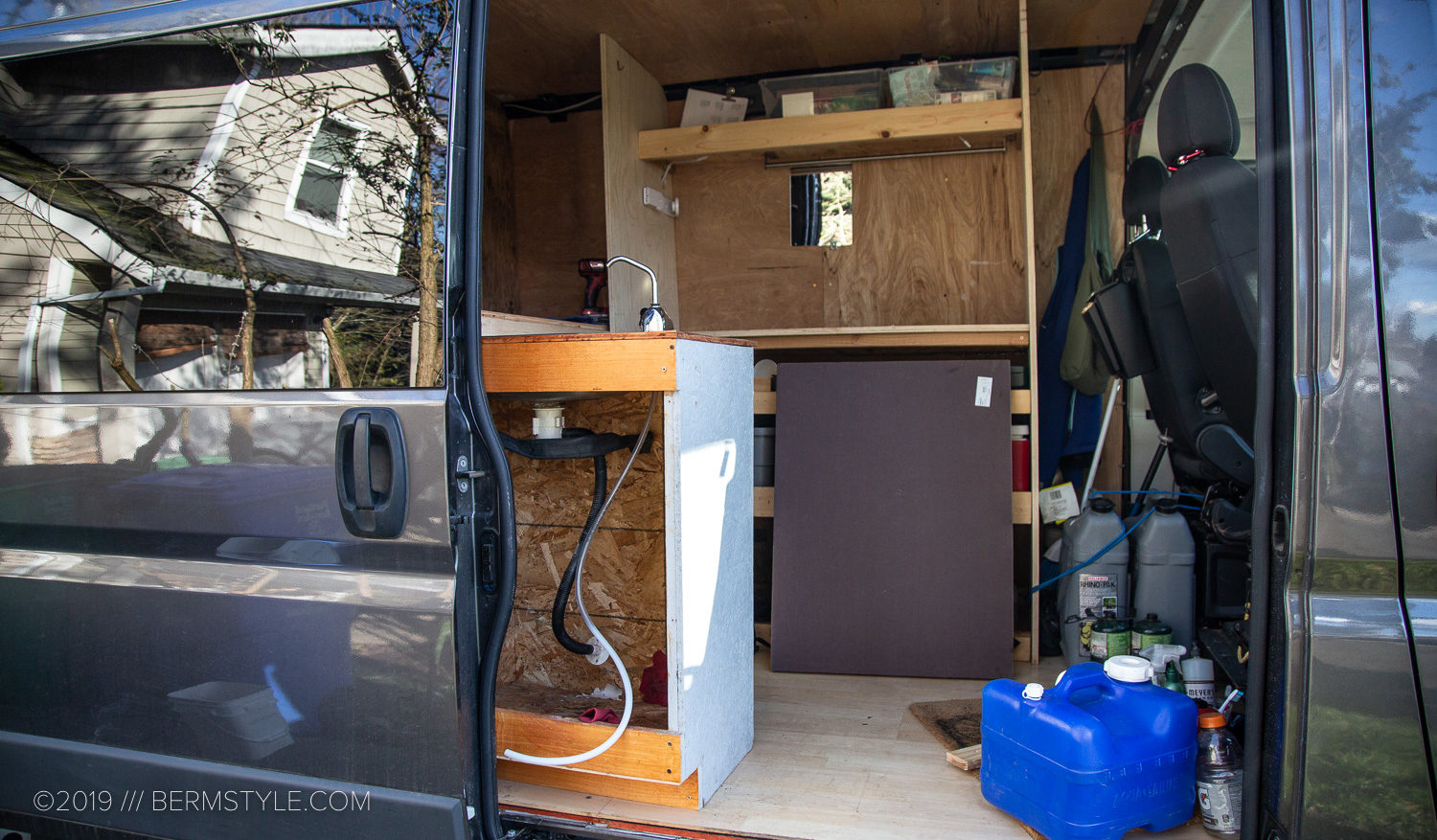 Our sink and galley: before

The kitchen sink and faucet is built around the Valterra Rocket Hand Pump. Popular for use on sailboats, it utilizes a handle to manually pump water from a container. At around $40 for the faucet/pump combo, it’s a simple turnkey solution for getting water from a container and into the sink. Add a hose for the water coming up and a drain hose and a gray water container and you’re off on adventures.

As Inga didn’t care for the cheap wood and gray paint I used for the initial cabinet, I decided to rebuild the cabinet box. We also were tired of bending over to watch dishes, so it was an opportunity to address that. I had initially modeled the sink after a cabinet I saw at the store. While it worked at the time, now that I knew I was happy with our layout, I decided to raise the height of the sink. This time I spent a bit more, investing in two sheets of sanded plywood. I initially was going to use birch —  a nicer wood but the cost of it made me hesitate; I’m still on a very tight budget and the sanded plywood looked like it could do the job, with a similar look. I also spent that bit of budget on a much nicer-looking IKEA Karlby countertop, (walnut, $169) inspired by my friend Chase’s van. (which was in turn modeled on the Faroutride van) 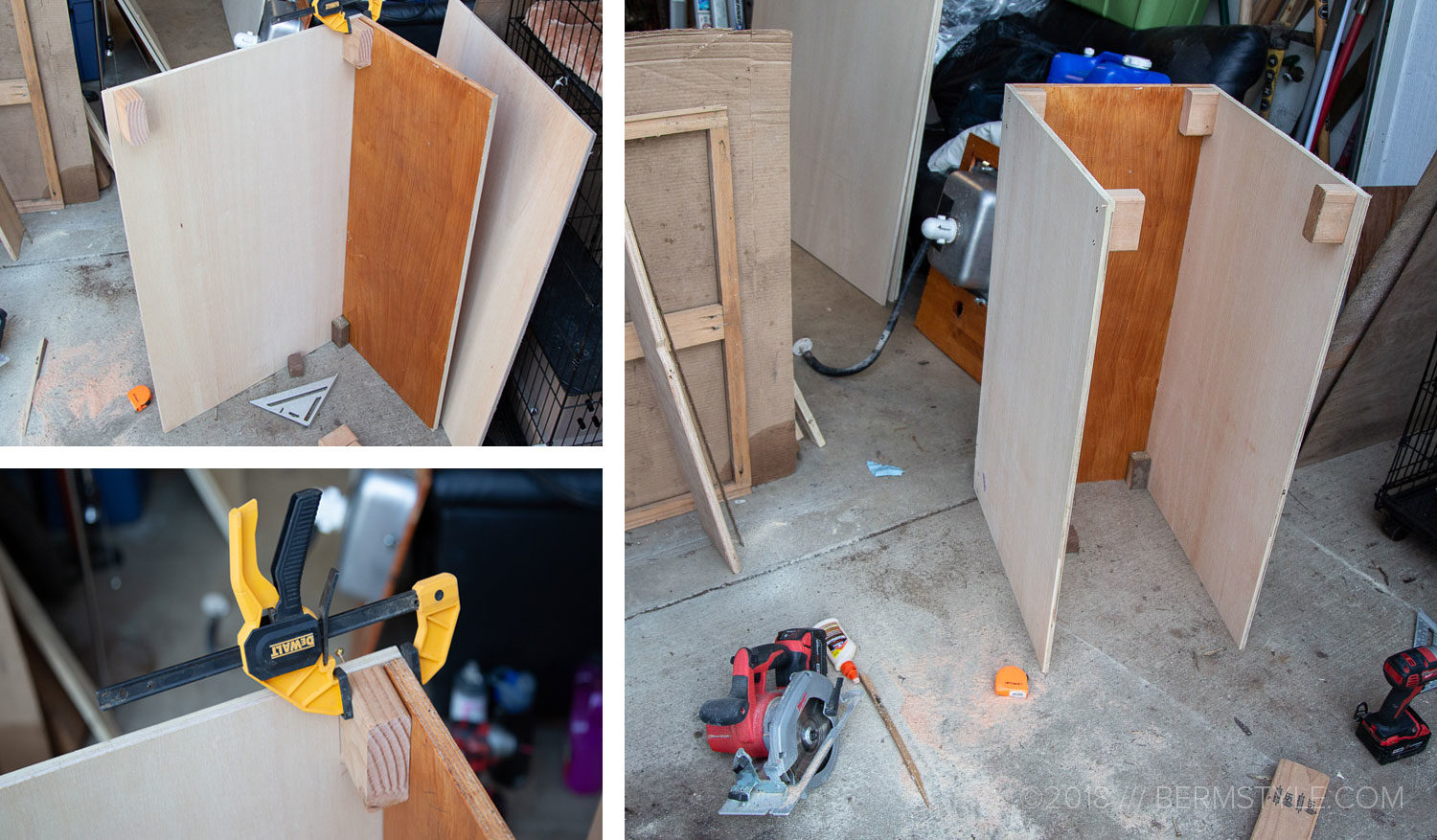 However, I still don’t know crap about building a cabinet, much less a wood box. My background in construction and woodworking is Legos and Tinkertoys. I never took woodshop classes — a regret I still have, and one I’d like to rectify at some point. Though I’ve started using pocket screws and a Kreg jig a little, I didn’t have the correct size screws on hand and instead came up for a different solution for creating what was essentially a giant wooden box. (see photo… I used a 2×3 at the bottom for structure and screwed the panels together using scrap bits of 2×4 to anchor it together)

It wasn’t the most elegant solution, but it’s solid and after the sink is installed you don’t see the inside anyway. 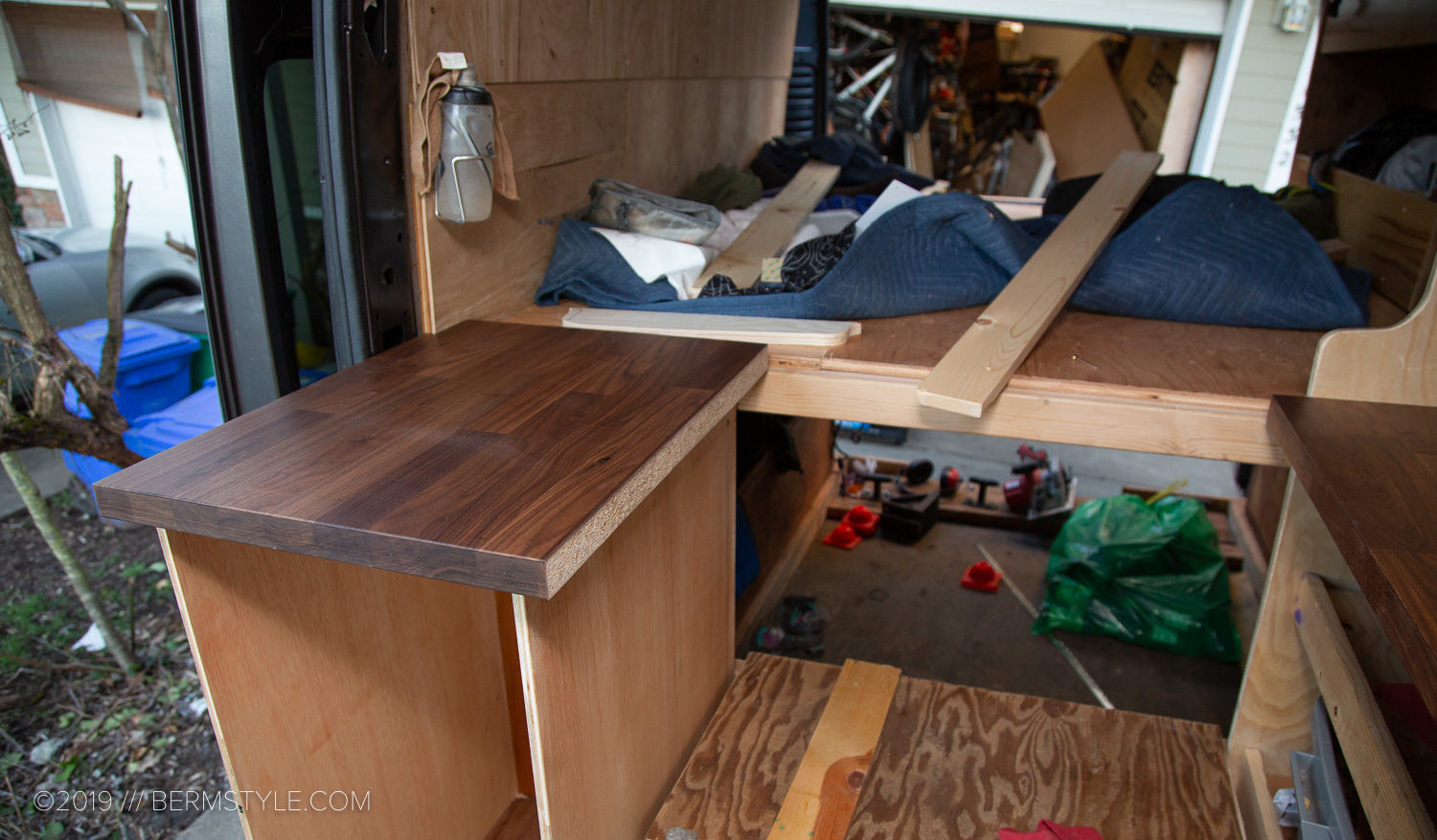 The IKEA countertop makes things look much more refined, though a full wood countertop would be my pick if I was going to start all over again.

After laying the IKEA countertop on to see how it all looks, I cut the hole for the sink. I used the old countertop as a template, which saved a bit of time. Reusing our bar sink, I ordered a soap dispenser to fill the second hole, finally putting it to use. I also used a piece of the countertop to add a short divider from the bed, which added a nice touch, making it look much more finished.

The downside of the lower-priced IKEA countertop is it’s the cheap IKEA wood. It includes a trim piece that sticks on with its own adhesive backing. However, the trim piece IKEA includes is not staying on. It’s also shrinking a bit after getting water on it. I’ll probably have to add a better adhesive to fix it. 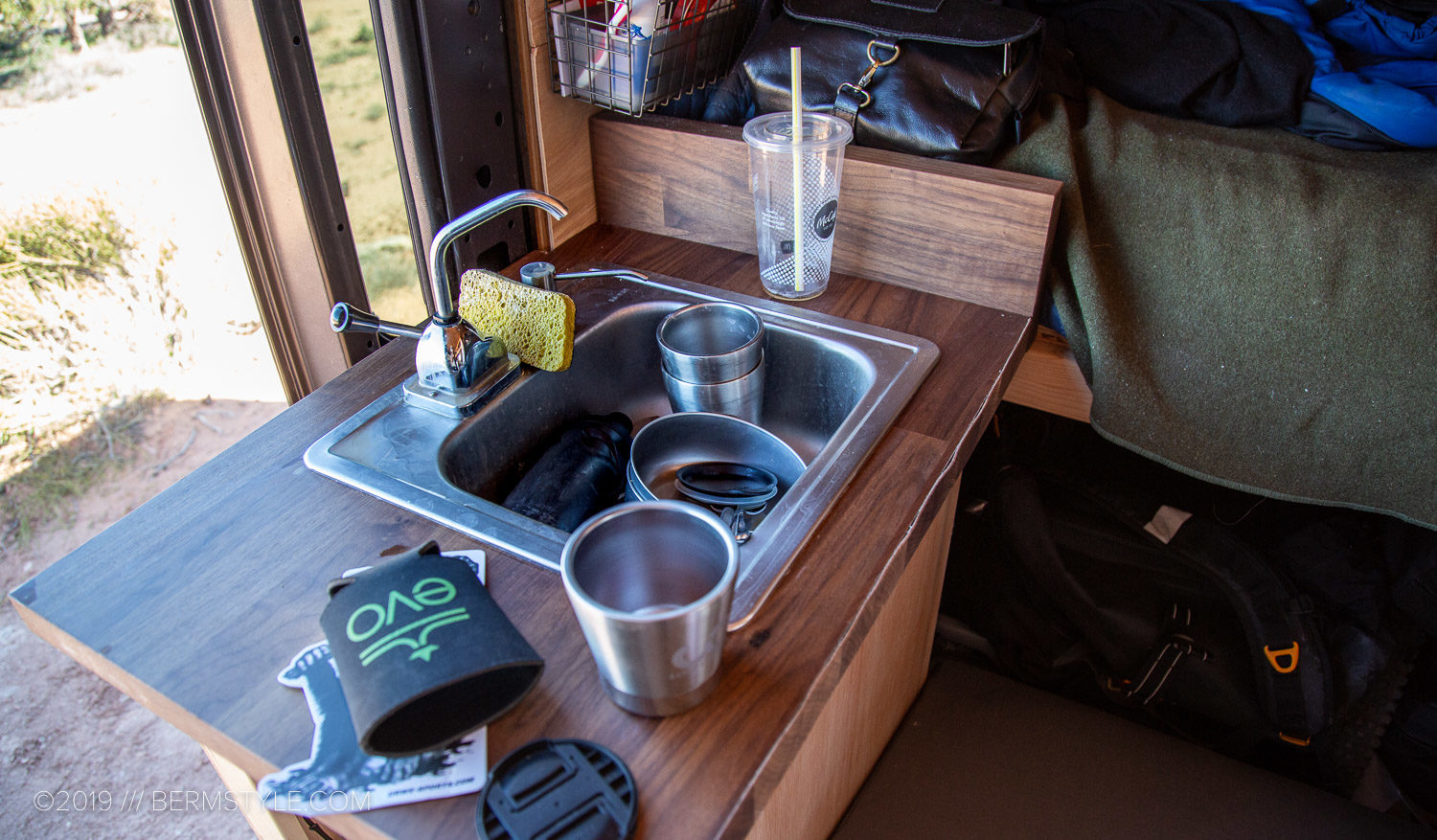 Our sink in use parked at a trailhead in Moab, Utah. Note the glue-on IKEA edge piece is already bubbling and needs to be addressed.

Now that we’ve done a few trips, I’m a little disappointed with the quality of the IKEA kitchen counter. I believe they offer a full wood version for twice as much. If I ever redid the van from scratch, I’d spend more on key elements like the block as it really makes the whole build look better, and hides my lack of skill everywhere else. (Lipstick on a pig!)

The sink plumbing also received a massive upgrade, as it was time to set up a proper gray water container. 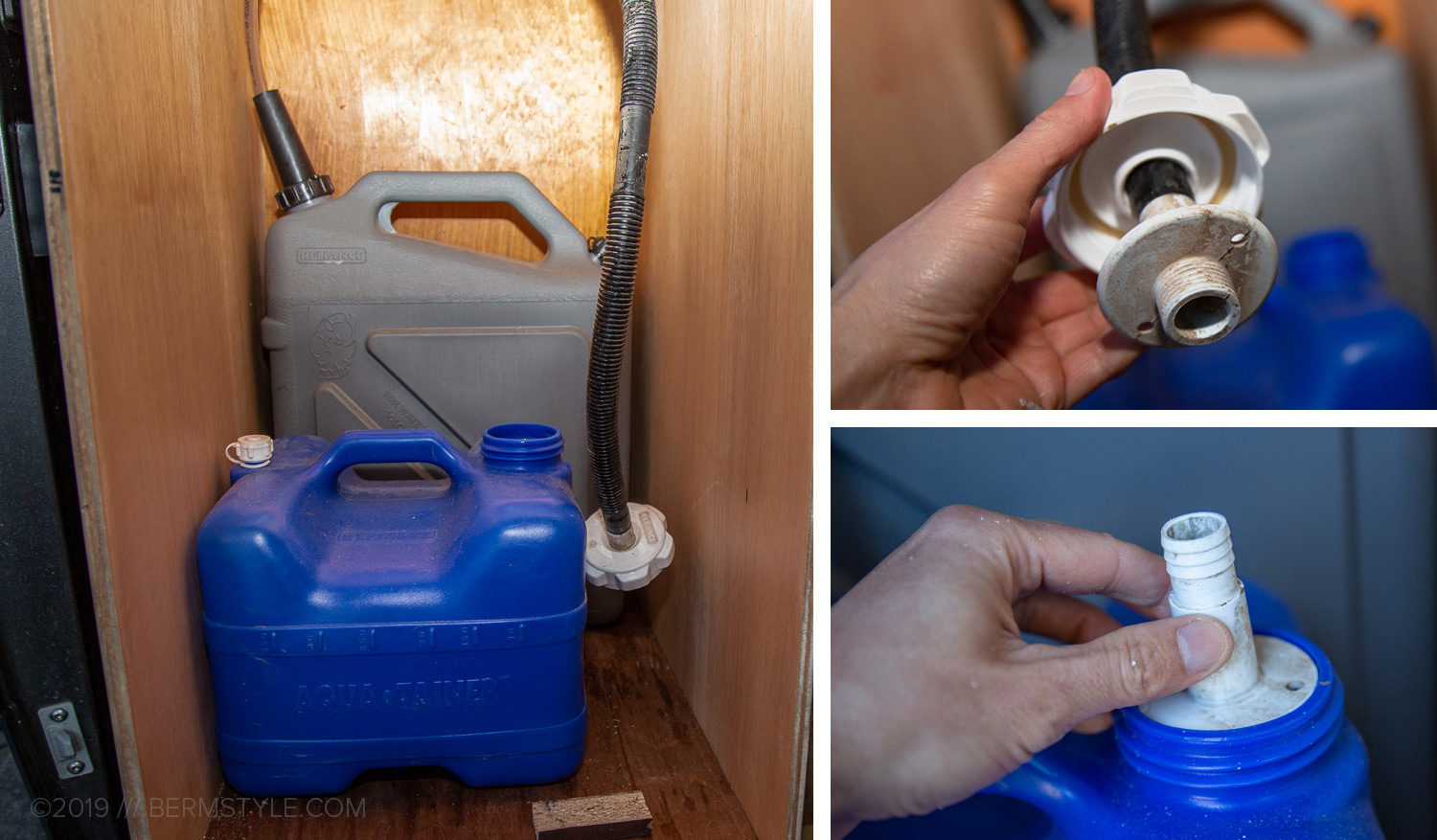 Connecting the drain hose to the Aqua-tainer.

Because I didn’t want to redo the bench/ step, I built the new box to the same width as the old one. I have two Reliance Rhino Pack 5.5 water containers that I carry for freshwater. One lives in the sink, while the other one is strapped in the back behind the bikes in the garage.

I used the Reliance 5.5 gallon container for the freshwater, with the gray water going into a 7 gallon Reliance Aqua-tainer. The tricky part though, was how to connect the Camco Drain to the water container lid. In other van builds, it looks like they were able to mate the threads and thread it into the lid. This did not work at all, and I sat around scratching my head for a while before coming up with an alternate solution.

Then it came to me. Since the drain hose wouldn’t thread to the water container lid, I’d route the hose through the lid itself. There was one more modification I had to do to make it work – the end of the drain piece needed to be resized so the lid could thread over it. Out came the Dremel, and sometime later I was able to attach the two pieces. 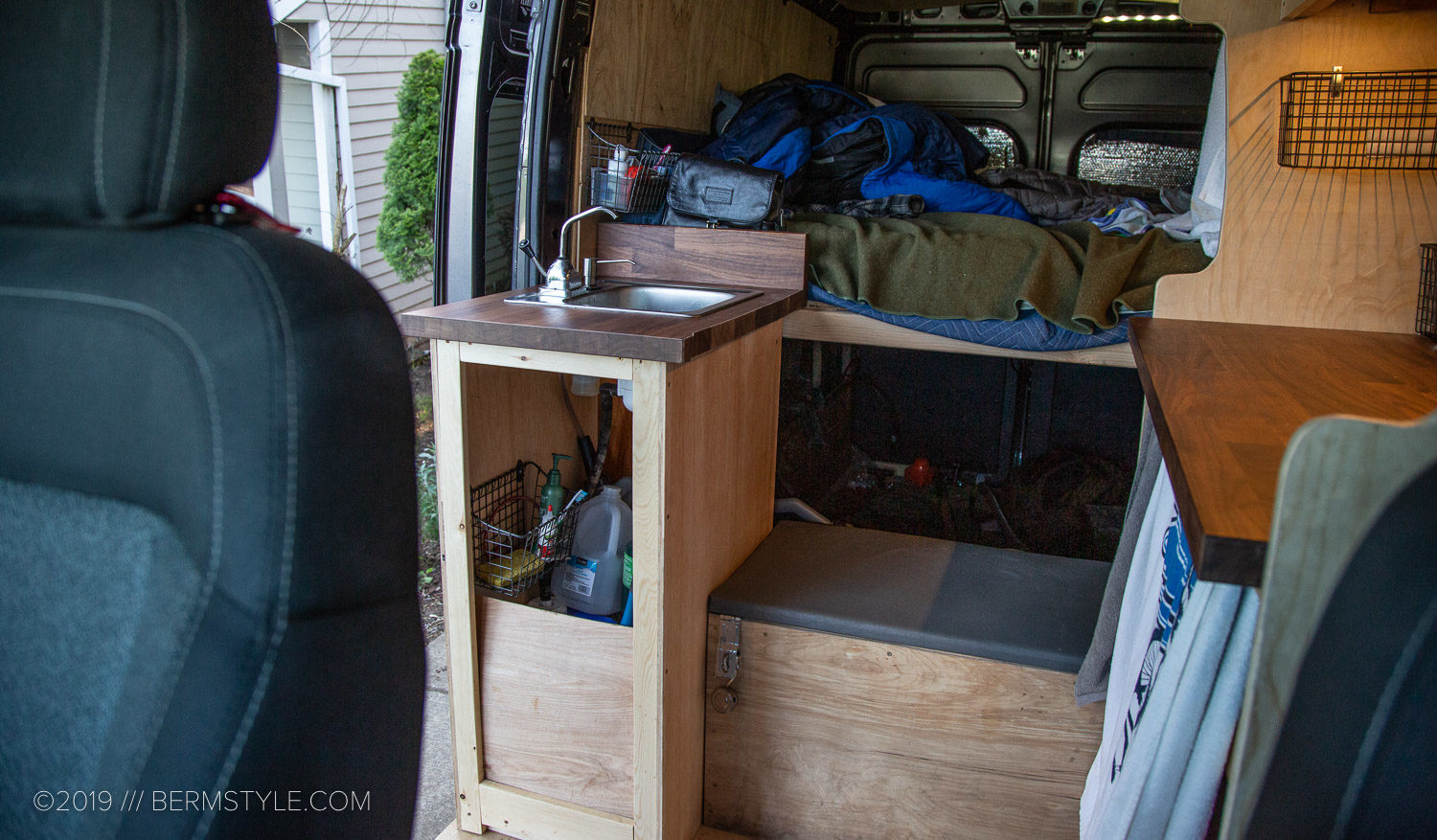 As for the main water container, I simply routed the vinyl tubing down from the hand faucet pump, and into the water container. It isn’t airtight, as there needs to be an air intake for the pump to work. Although dust and particulates could get into the water, we mostly use it for washing dishes and cleaning up after rides, so its not a big deal. We also carry a Brita filter in the event we do need to drink the water.

I later built a door; we’re still working on how to best utilize the space under the sink. At the moment it houses extra soap, sponges, fuel cans for the stove, pee jars, trash bags, and pretty much anything else we randomly toss in there. Plus a baseball bat, just in case… 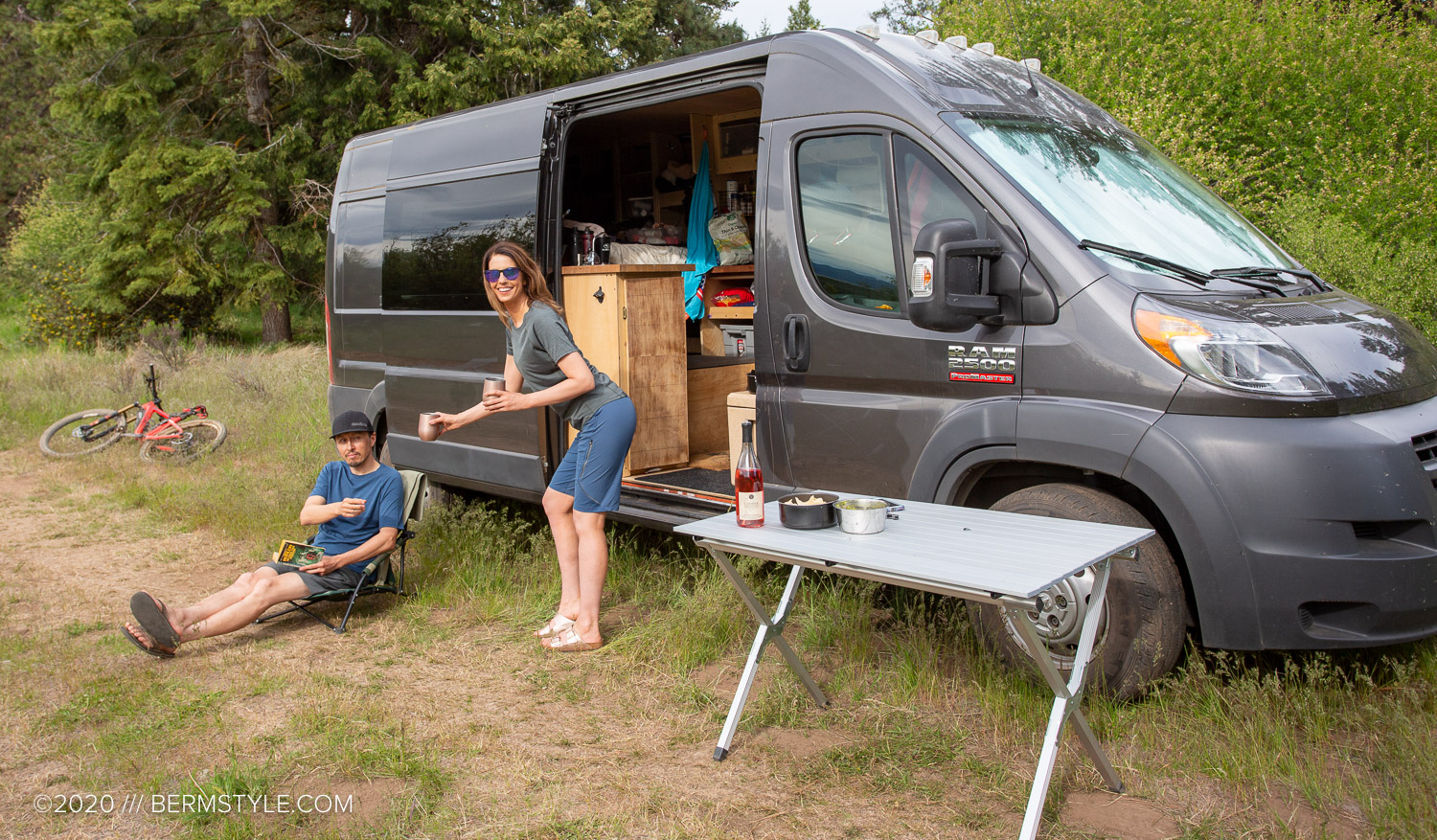 The sink looks so much nicer with a door!

For someone looking to make one for themselves, here’s an easy list of materials that’ll save you a ton of time should you decide to make something similar: 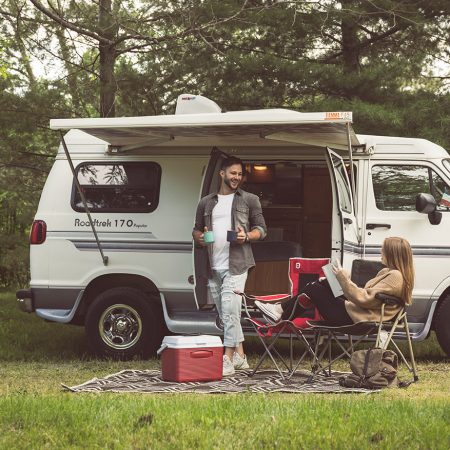 Rent a Van or RV to Test Drive the VanLife