With the long, wet Oregon winters, getting out of town and spending some time on the road is what having a van is all about. Before taking off for our winter hiatus from the rat race, it was time to sort out some details in our budget van conversion. After a summer of playing as often and hard as we could, we were ready with our list of desired upgrades for the van.

Building a space to store our stuff was a high priority, but it was also time to actually put up the rest of the insulation and finish the walls. 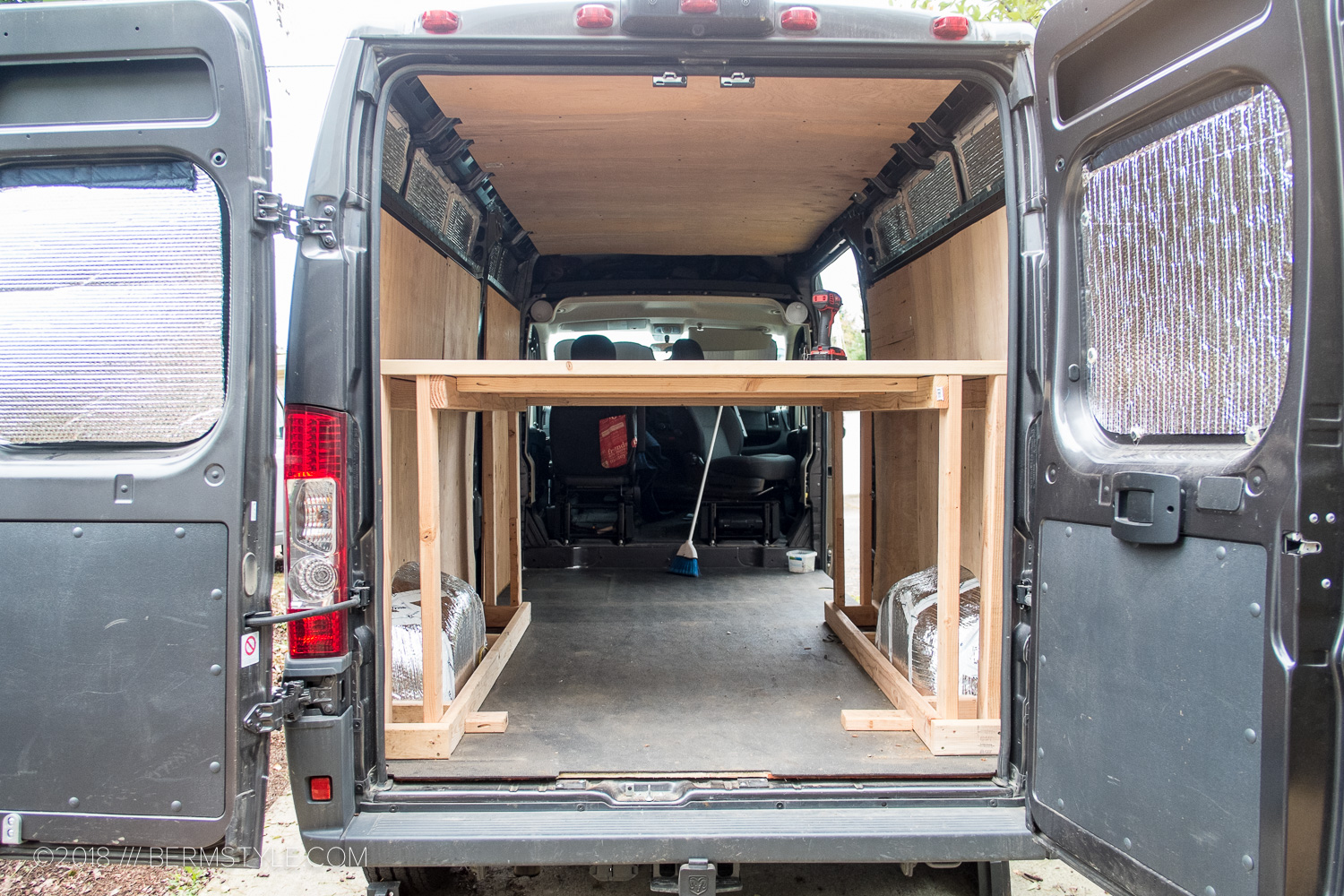 We finally have full insulation and a ceiling, one year later.

To prepare for the reset, I pulled out everything and stripped the van down to bare walls. Ideally this would have been the time to get power and a ceiling fan installed. I was almost ready to bite the bullet and finance this one, but the waiting list at the local van fitters is substantial. In addition, the cost was a lot more than we were ready to spend. Buying a new van (and a house) meant no real budget for the conversion, leaving me with a can-do attitude, a pile of lumber, screws and a Milwaukee combo tool set to make it all work.

It didn’t take that long to disassemble the sink cabinet, bench and pull out the other cabinet, thanks to the fact everything was just screwed together with a drill driver. Sticking all the screws into a plastic bin for reuse later, and I started working on  figuring out how I was going to suspend a ceiling. 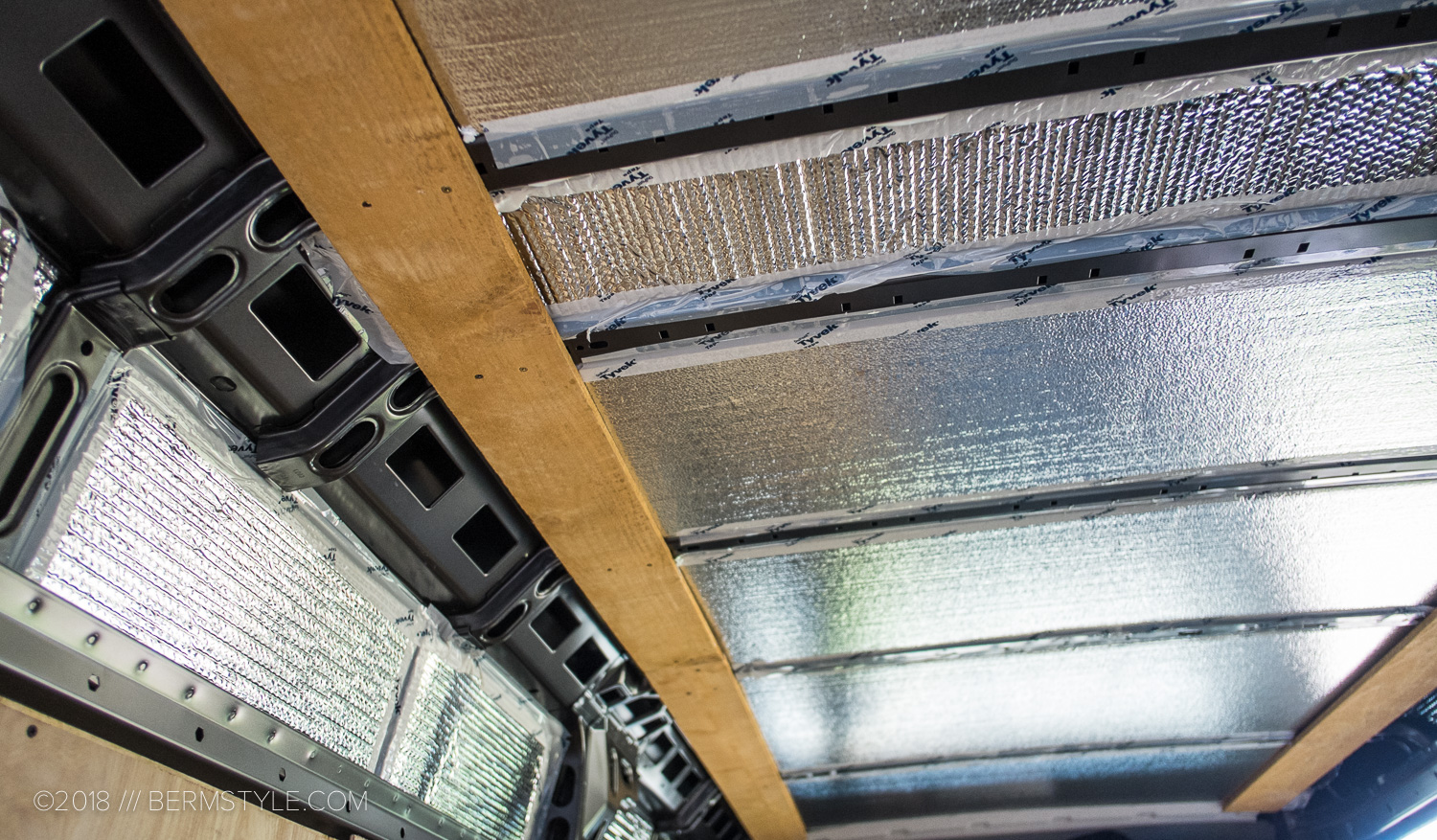 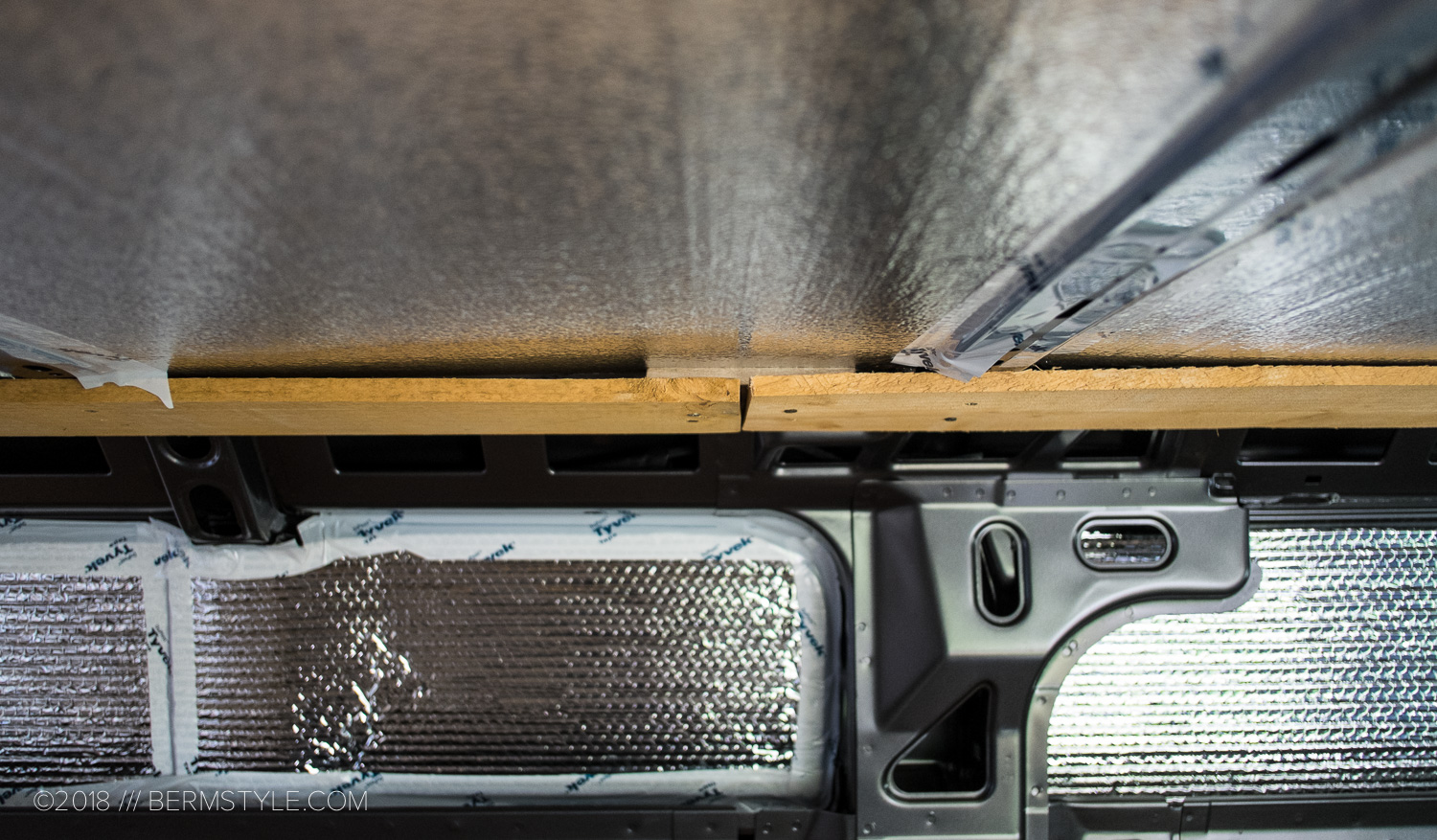 Connecting the wood beams together to avoid bowing and gaps. The wood panel would probably serve the same purpose, but the wood I used for the panel was on the thin side.

After getting the second layer in, I had to figure out how I would attach the wall panels. I decided to replicate the walls and would bolt wood ribs up that I could screw into. I didn’t want to lose the head clearance though, so I found some cedar at Home Depot that was fairly inexpensive and low profile and started screwing it in. At this point I was also running low on self tapping screws, so I used some regular screws in some locations. Hopefully this doesn’t bite me in the butt too soon; I will probably have to replace or tighten them at some point.. 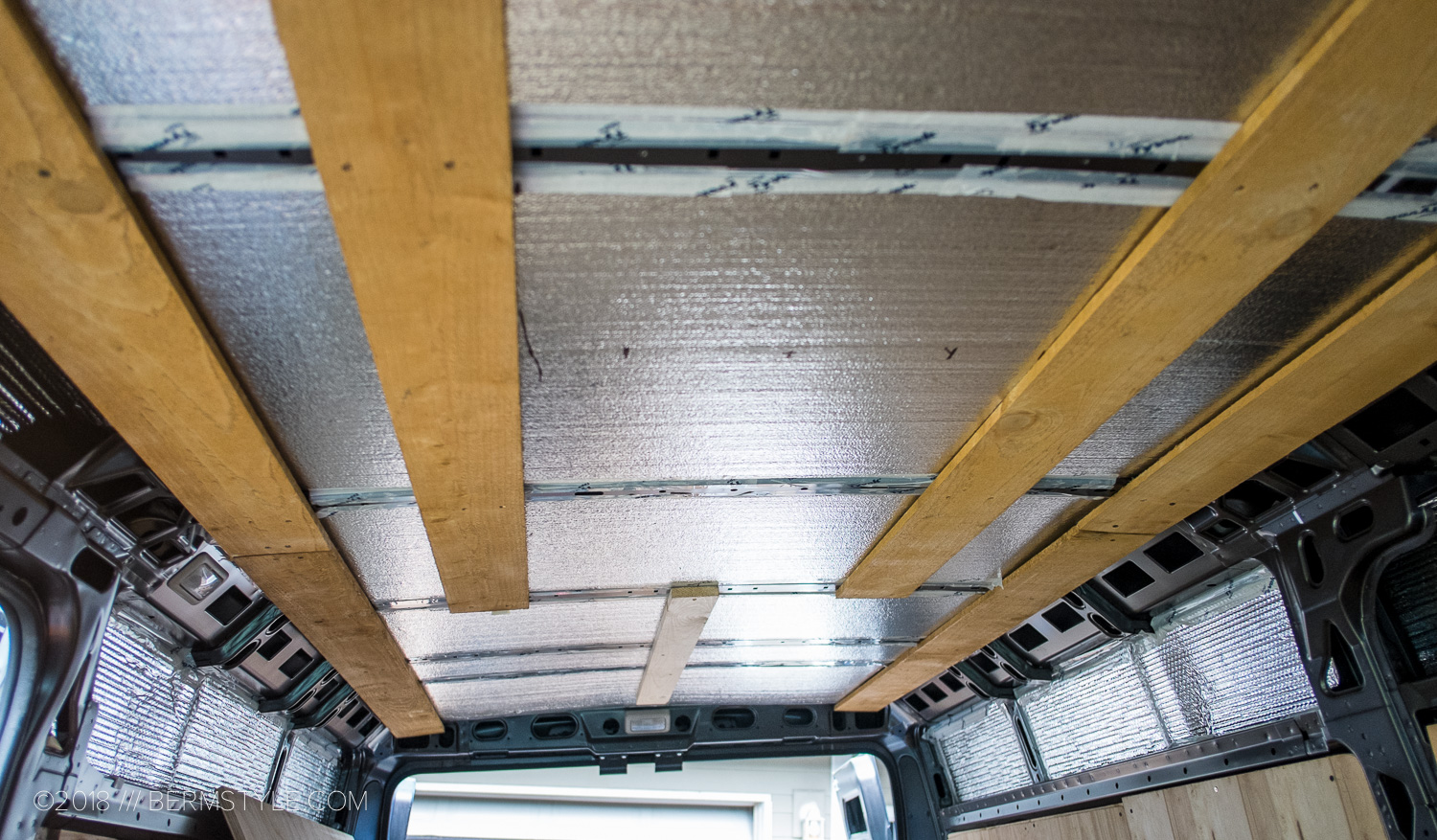 I used a very thin wood for the panel as it was mostly aesthetic. The downside is it needed additional ribs for structure. When I add the fan I’ll have to re-do part of it yet again.

The hard part was trying to decide how many ribs I needed. Did I mention I had no idea what I was doing? But sometimes you just make it work. 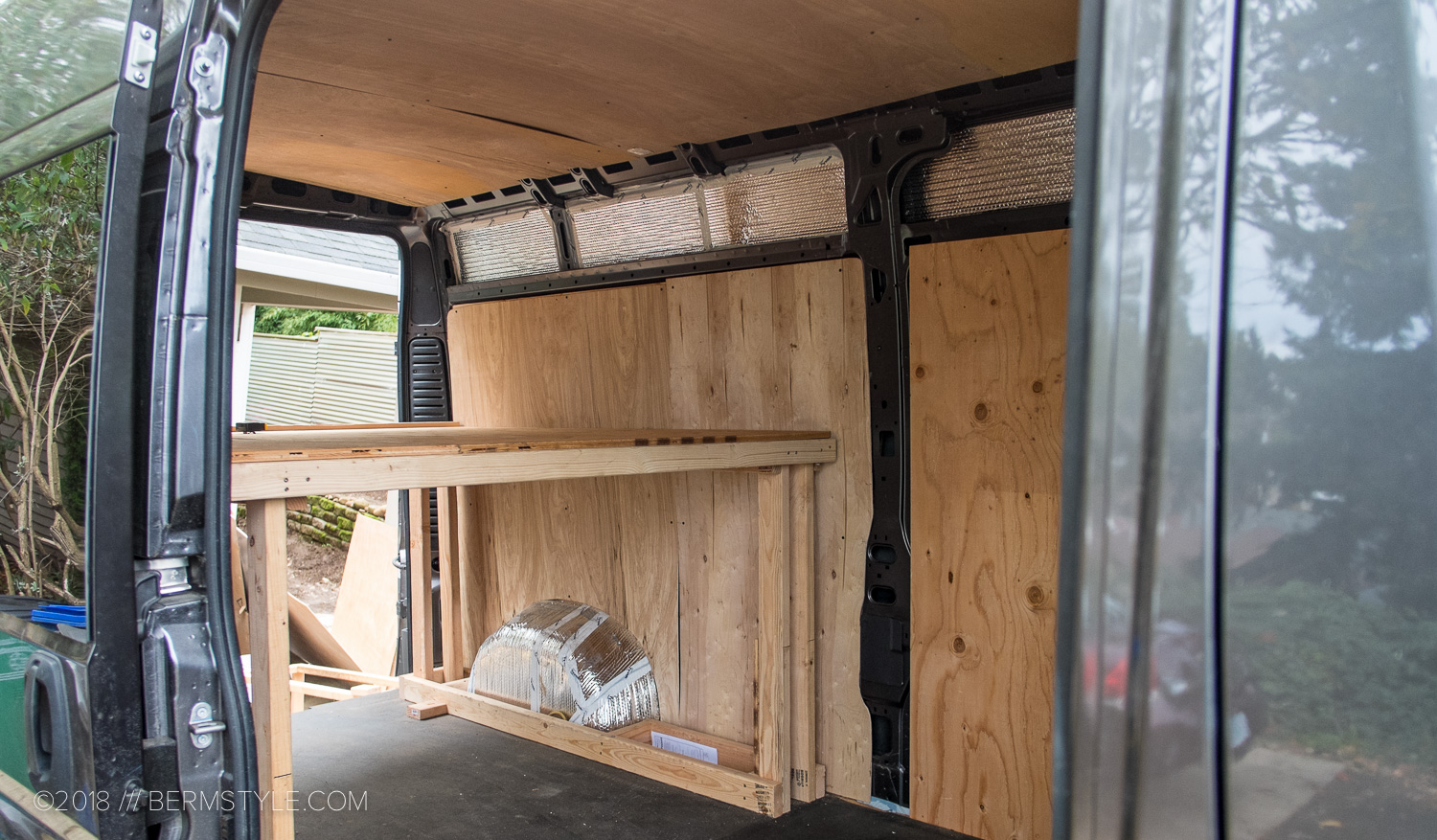 My first go had gaps in the wood panels, so I had to remove it and add additional ribs. I apparently like to learn and do things the hard way.

It turns out the answer is enough that the ceiling panel conforms to the shape of the ceiling. I didn’t have enough initially and the ceiling bowed in a few places. Removing the panels and adding a few more ribs fixed it.

I didn’t have nearly as many ribs in the walls. 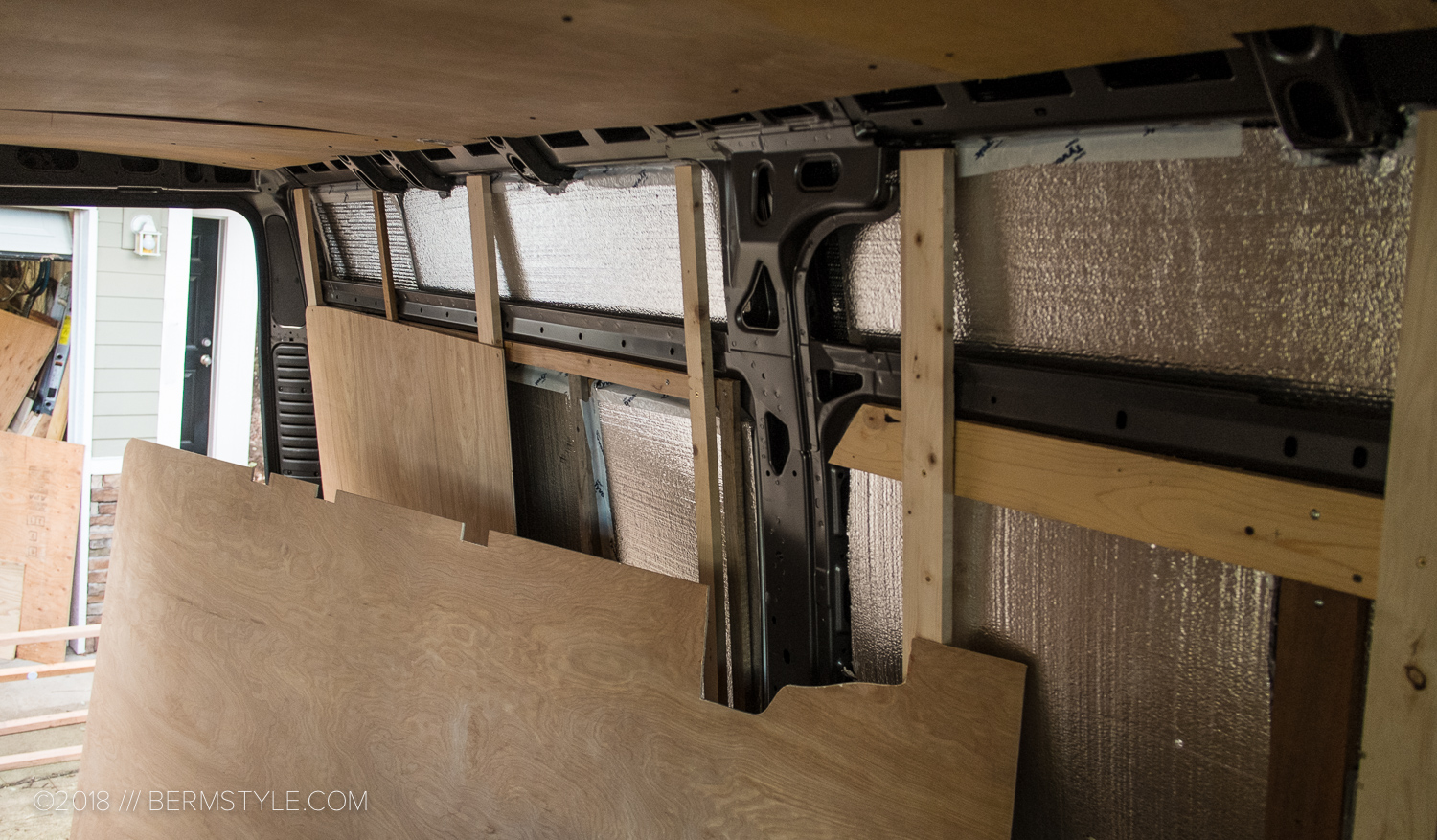 Time to finally redo the walls. I had to remove the bed platform to work. The tricky part is removing the cutouts to fit with the shapes of the wall. I created a cardboard template to start and traced it.

The first time I attempted to do that walls they didn’t extend all the way to the ceiling. I couldn’t quite figure out how I wanted to run the ribs but I ended up throwing in the towel and just running beams from the floor up. This way I could actually run panels all the way to the ceiling. I actually could have added more insulation at this point since we lost a 1/2 of space on each side but I just wanted to get it done. 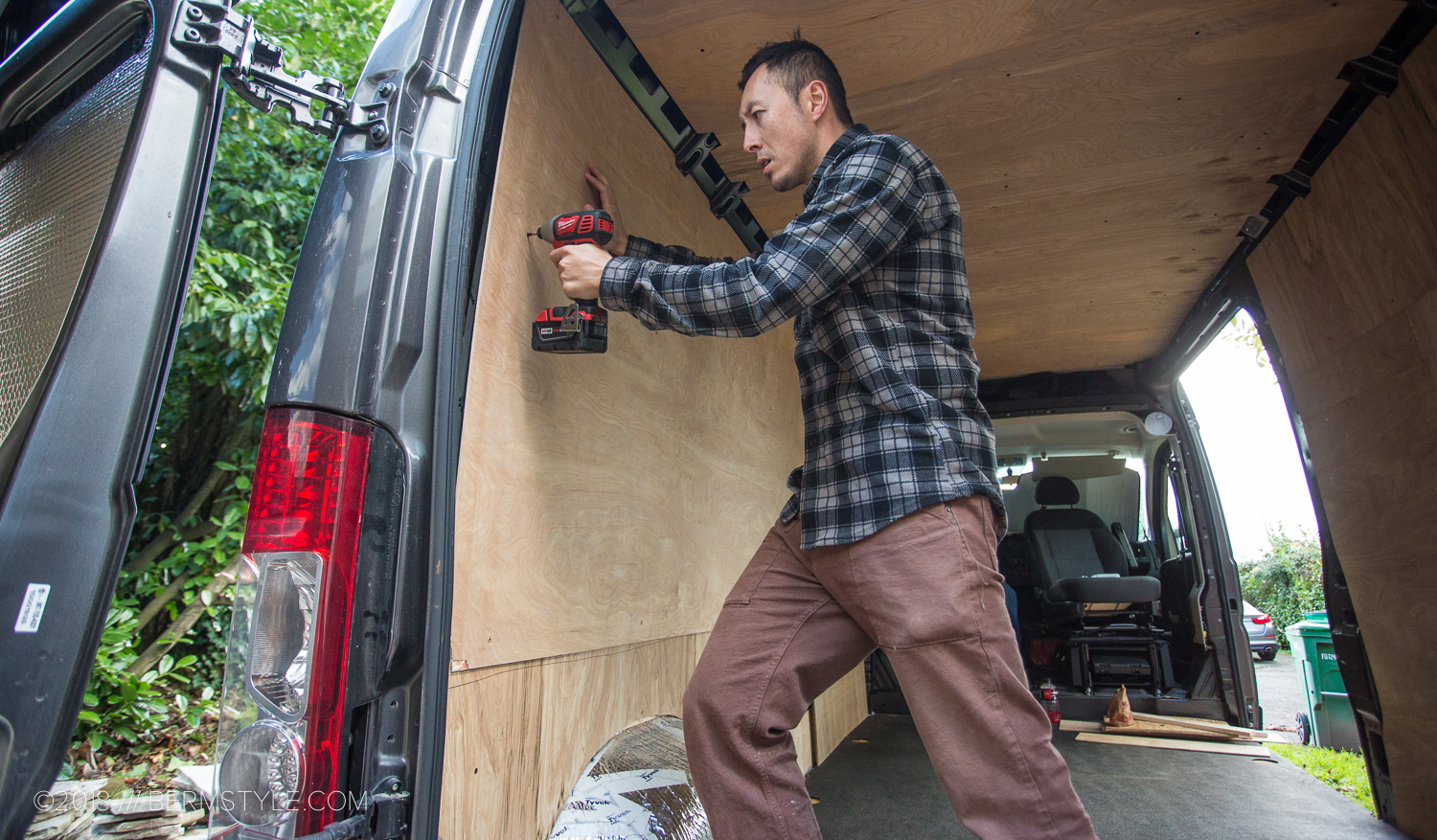 Finally a full wall. The wood piece for the wall panel was thin so I ran it over the lower wall section as it would be out of sight under the bed. (and it was easier)

In hindsight I would have just run them ever 24″ instead of how I placed them, which was more based on the length of the sheeting I wanted to cover them with. Either way, we finally had some decent looking walls and a ceiling. The van feels a lot nicer with walls. 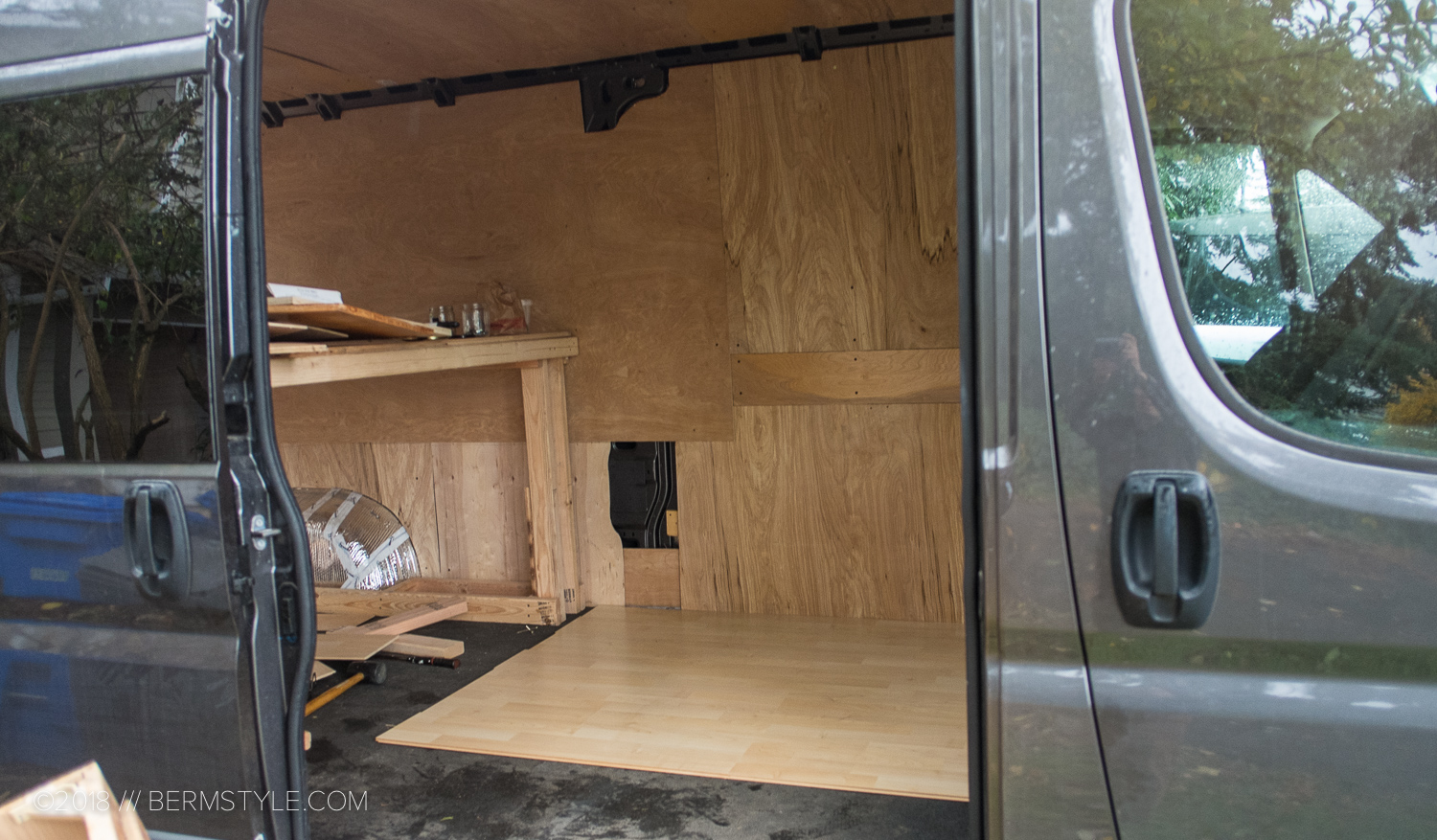 These parts of the wall protrude a bit more outwards. I was planning to place something in front of them so left them uncovered.

We also wanted to lower the height of the bed platform. Initially set with 40″ of clearance for bikes, it was much higher than it needed to be, and now that we had a ceiling we lost some headroom in the “loft”.

I had been concerned with fitting a DH bike in the garage, but as it wasn’t an issue, I decided to lower the bed a full two inches in order to have more head room with the newly added ceiling. The new version has 38″ of clearance, which fits all of our bikes on fork mounts.

I had to pull it all out to put the walls in, so I cut everything down two inches before reassembling it.

Adding a wood floor to the van

Then it was time to cover the industrial plastic floor with something a bit more homey. I had some panel flooring I bought off someone on CraigsList months ago, and installed it, ending with the bed. The bike garage was going to get dirty and we like having the utility aspect hauling stuff since I don’t have a truck anymore, so we left the back uncovered. 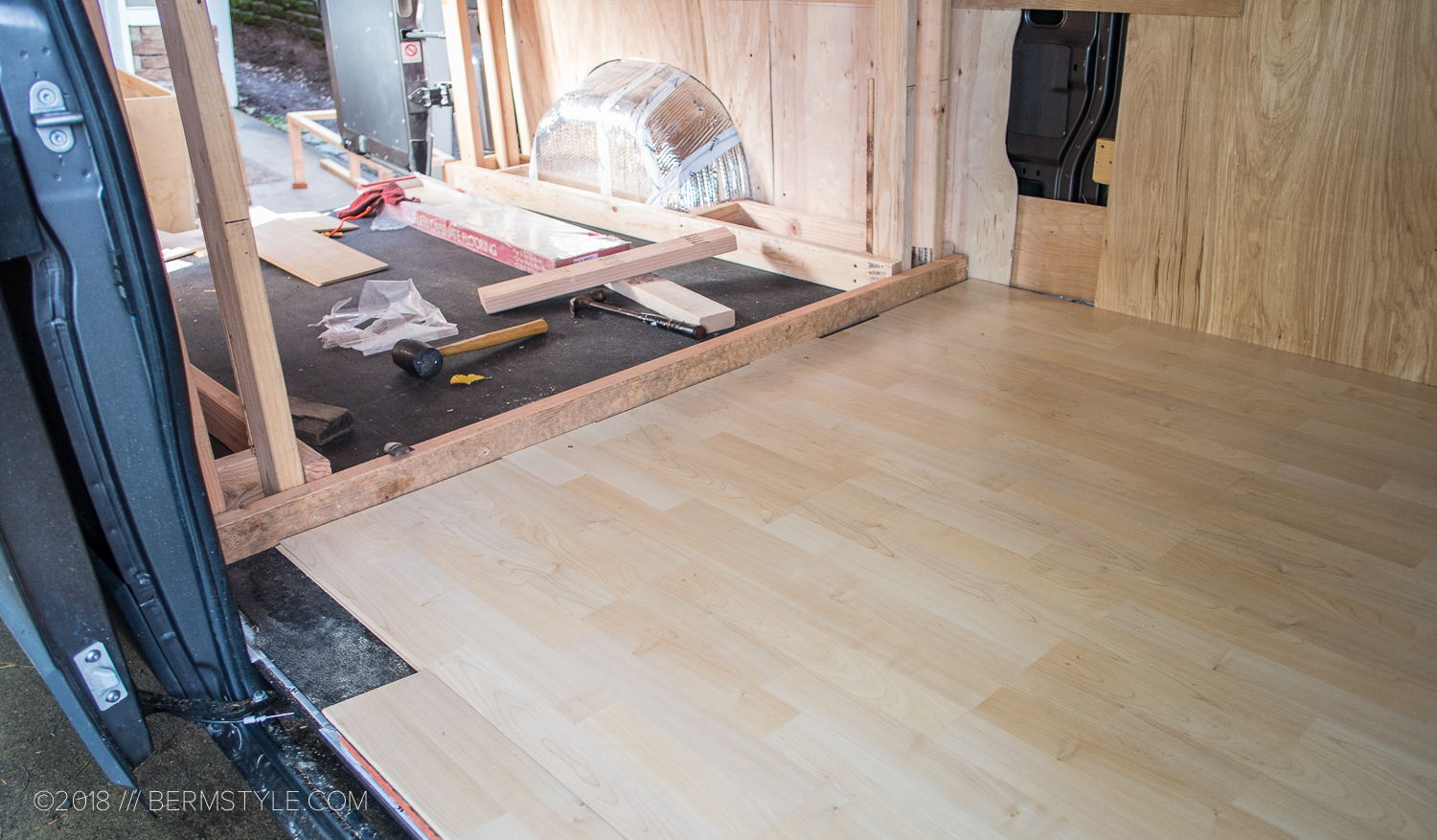 Installing wood flooring from Home Depot. It isn’t totally even on this side, but it’ll be covered up anyway.

Adding the wood flooring wasn’t too bad. Measure, saw, check, file and check again. I’ve never installed the stuff before and while I did a decent job, if I had taken even more time, I could have made my cuts even more dialed. I found cutting things a bit long and filing it to fit produced the best results. Once it was all in I added a few screws to the wood panel underneath to hold it all in place. 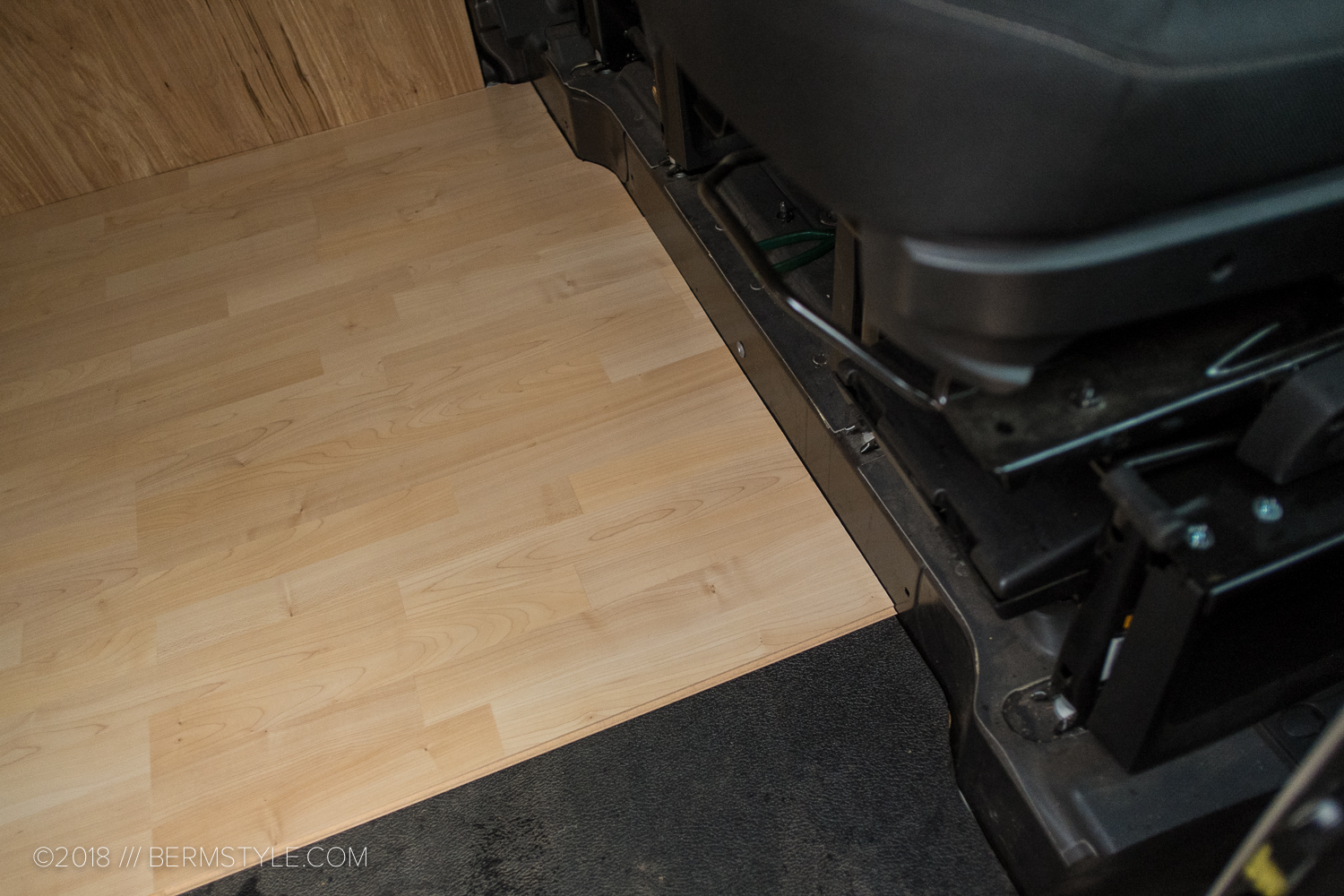 Cutting boards to fit the curves of the van.

Adding a kitchen and shelves

I finally found some inspiration online and figured out a solution I could easily implement. I’d connect the wall shelves to the cabinet that would make up the galley/ kitchen, and make it as one unit. Plus I could screw it directly into the bed to make everything solid. 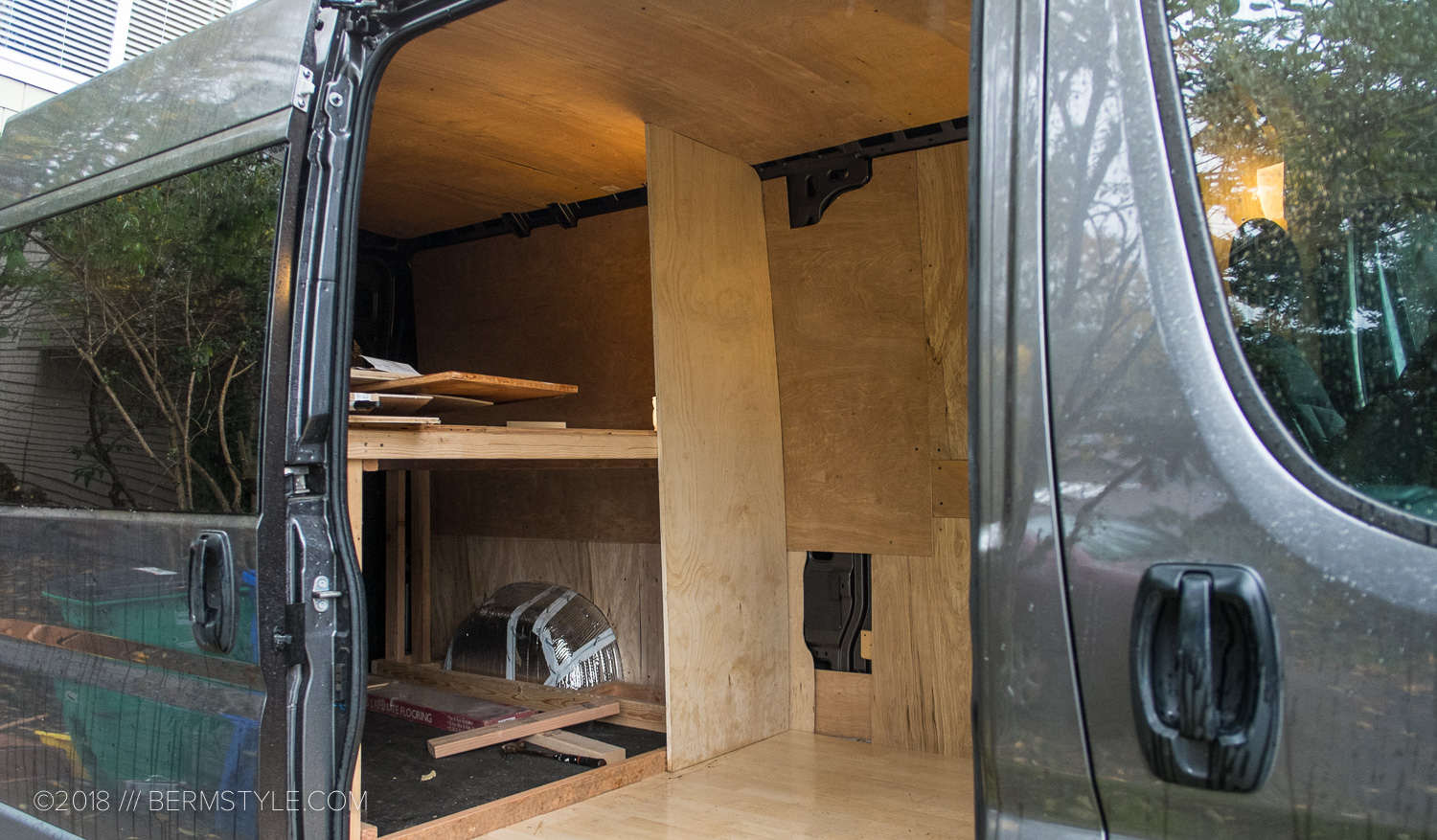 There’s just one problem. While basic shelves are one thing, I’ve been hacking my way through this work and I really have zero experience with cabinetry. I wanted to make some pretty doors but at the moment I don’t have the time or patience. Ideally I’d take some workshops and join a maker space to learn how to do it right. Unfortunately I don’t have the time to acquire these skills, so instead the plan was to screw something together that would function as needed.

This was already build version two. Version three will involve a lot of beautifying, finishing and dialing in the rest but in the meantime, we have tons of trips and adventures to do and it will have to wait.  The solution: put everything into bins and tubs and figure out a place for it all. 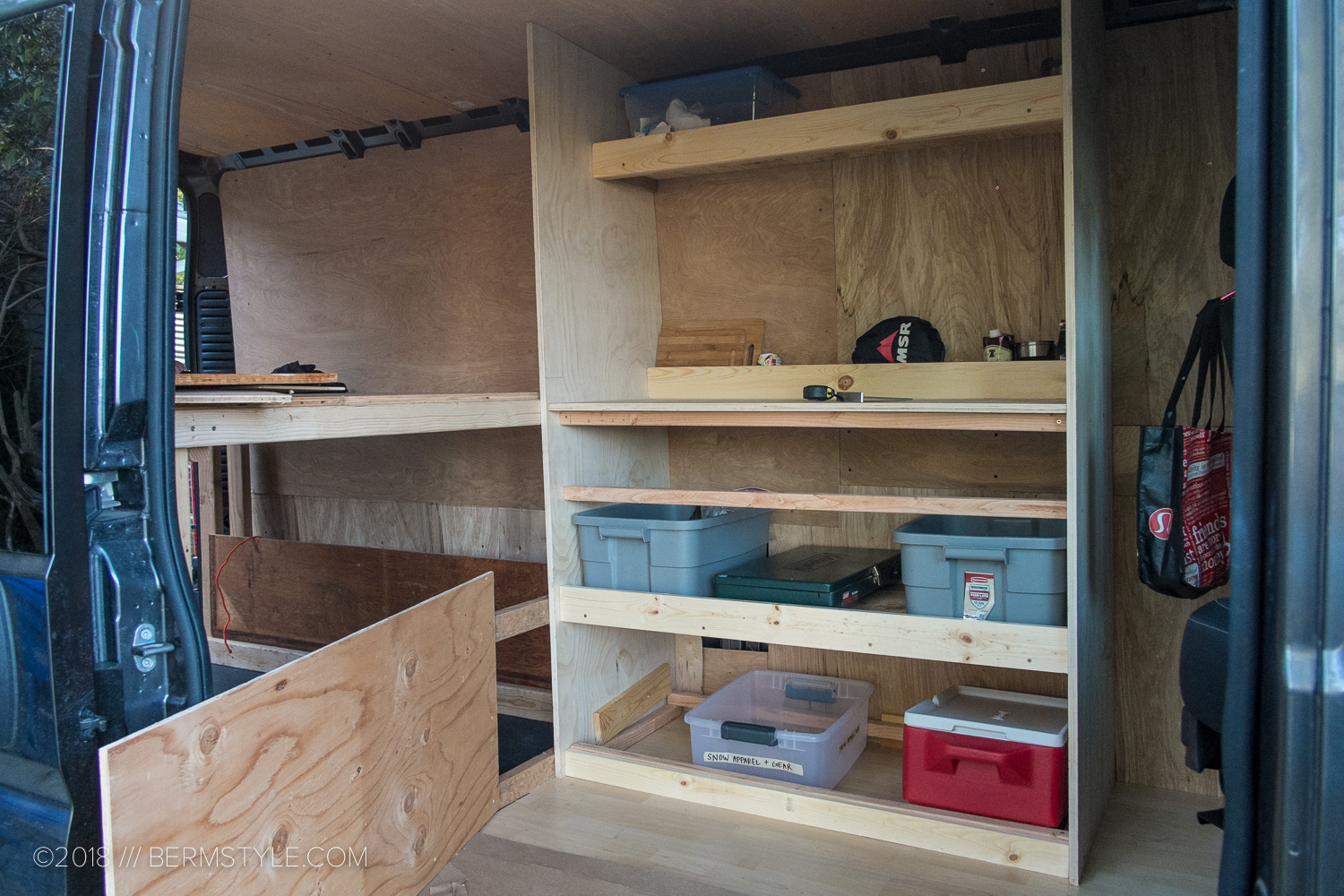 Pairing shelves with Rubbermaid tubs is pretty darn functional, but it feels a lot more industrial than I’d prefer. Most importantly though, we finally have a place for everything that needed a place. I haven’t bothered to finish the wood at this point; since it wasn’t finished it didn’t seem to be a good use of my time. The end result totally works and while I was going to change up the profile of the walls of the galley, they actually work really well as partitions, and I added hooks for jackets and gear organizers. I may even add a wall hanging shoe rack from Ikea.

We’re comfortable traveling, we can easily prepare food and everything totally works. I wish it was prettier, but I’ll make that happen when I can make the time. (unfortunately a lot of my free time is now sucked up by leading volunteer trail building efforts at Gateway Green in Portland.)

At some point I need to add that ceiling fan, so when I disassemble it, I’ll make sure I make it fancy when I reinstall it. I’ll probably rebuild the sink cabinet at this point as well.

Adding doors to the shelves and finishing it all would make it all look nice, but most importantly, I only have a few hundred bucks into this van conversion at this point. I should be able to reuse most if not all of the wood, but for now it’ll be a project for another day. 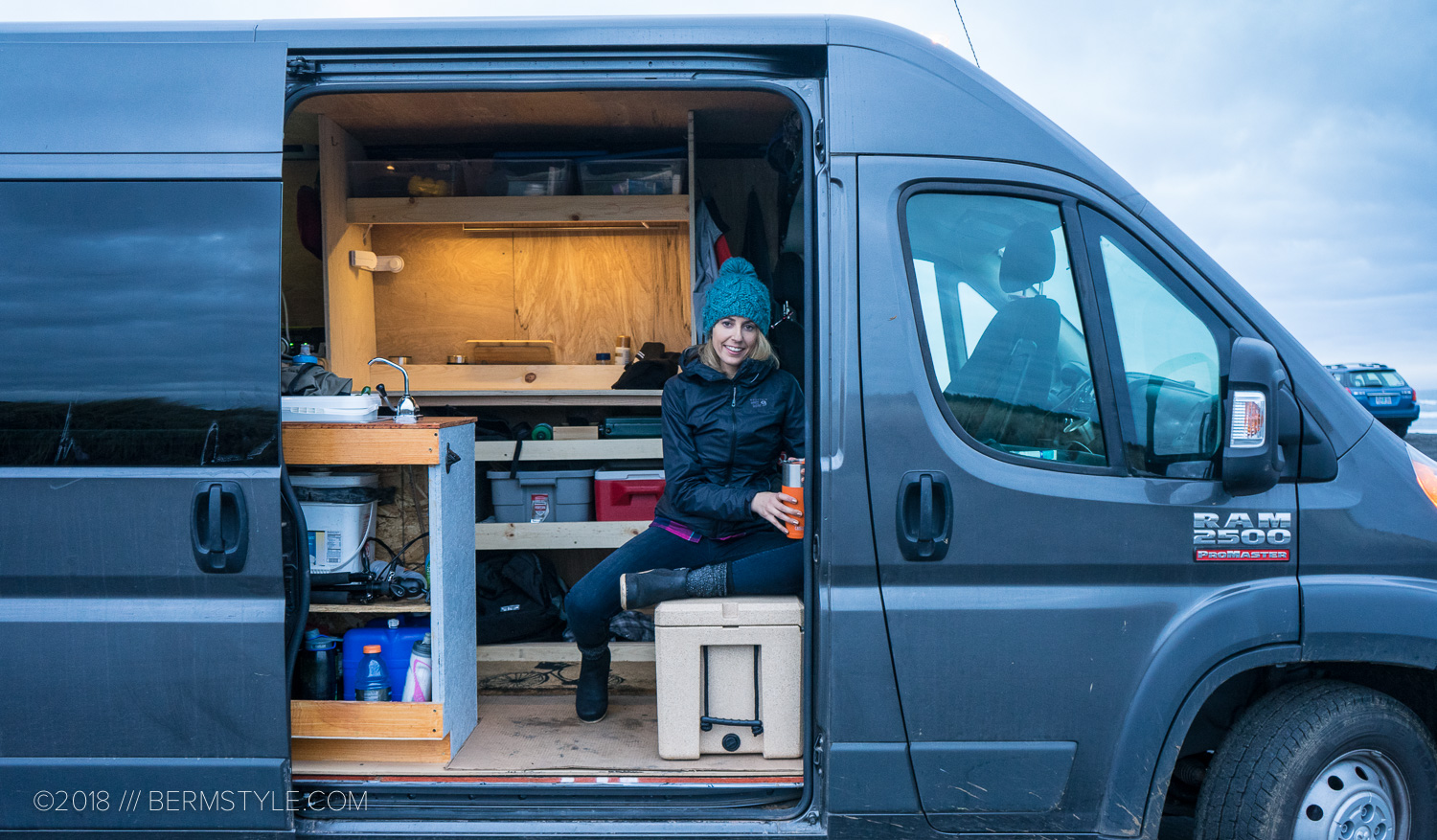 The irony of making the nice floor is that it is always dirty and you’re constantly sweeping and cleaning it. I have pieces of cardboard we put down for muddy bike ride days. Still need to make a curtain to hide the crap under our sink.

We also needed power for lights and to recharge our phones. I ended up just going to REI and buying a Goal Zero Yeti 400. I’m not 100% excited about this purchase but having lights makes a big difference. (will discuss our thoughts on it more in a separate post)

The major expenses to date for the van conversion have consisted of:

I think at my last tally we’re still under $2500 for our adventure van build out.