It feels like this blog has been all about this one new trail and nothing else lately. And it’s probably an accurate reflection what it’s like to have a conversation with those of us that were in the mix from the start. I know for a fact I’m currently not doing nearly as bad as Kevin or Davey, two of our heroes of the project that have spent every day off they have (as well as vacation time) stomping around, and pushing and shaping dirt. We wouldn’t have gotten as far as we have in just a few short months without them as well as Jim, who not only made it all possible but serves as the silent rock everything has been built on.

Trail building can often be a thankless task. People are always happy to provide criticism or complain about a feature they don’t care for, without offering to step up and help change it. Often times these are the same guys that ride by those of us carrying our shovels, slowing down just enough to yell out “thanks for your work!” as if they don’t know we’d rather be riding our bikes too.

However, there is a sense of accomplishment when you come back and ride a section of trail you’ve invested hours into. Not only have you gotten to know this small patch of ground intimately but from that point on you have a connection to this place. It can be something you feel every time you pass by, pedal over it, or rip a turn. And sometimes there are even better moments.

Sunday was a day filled with some of these moments, when we did our first flow checks on the new trail in construction at Camp Tamarancho. This new trail project breaks new ground in the Bay Area, and its our hope that this one trail will represent the Johnny Appleseed of flow, and exposes thousands of riders to a new experience of what our afterwork rides could be. After months of planning and work, we finally had a few sections finished and packed down enough to ride a few sections and it was time to see if the trail was as fun as we all hoped it would be. The video camera came out, helmets were donned, and we swung legs over our bikes to take advantage of the first track privileges that come with being the ones doing the work.

We all know the trail has been poached already. Tire marks left behind showing evidence of the telltale marks. Although we post signs notifying the public that the trail is closed, there are always those that disrespect the work of others. That couldn’t stop us from erupting in huge smiles, as the fun began.

Unlike many of our locals helping out, we’re only able to currently make the trek over the bay for build days once a week. We come early and stay late, and throughout the course of the day do as much as we can, leading crews of volunteers that come and go throughout the day. Although our trail alignment is only a mile long, building, shaping and compacting each feature takes hours, even with the mechanical tools we use. Thanks to the efforts of numerous other volunteers, we already have something to show for our work and it exists— a small piece of the mystical Whistler experience in our own backyard. (even if for some of us it takes a quater tank of gas and a bridge toll to ride it)

Thanks is owed to our trail building heroes (ahem, Jim and Kevin) that have been operating heavy machinery or building the wood retaining walls required to make the trail rock bike park style. Without the aid of the trail building machines, our crews of unpaid volunteers building the turns by hand would be laboring for days, only to create one insloped (bermed) turn. 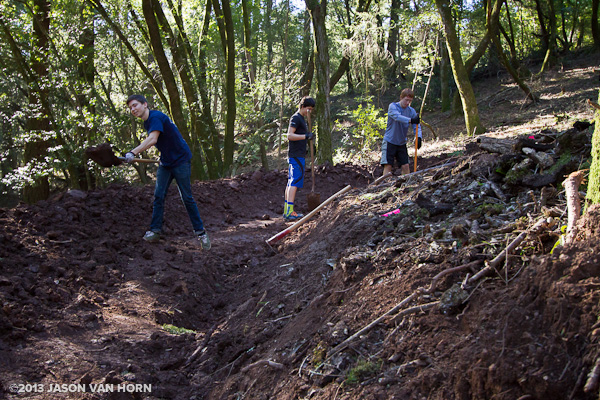 A large bermed corner at the start of Sunday’s work day.

Sunday we did just that, and focused on finishing two of the large berms near the top of the trail. Even with the turn roughed in, we still had a full day’s work in front of us to get it to where it needed to be before the rain that was expected later in the week would fall. In the morning our initial turnout consisted of about 10 workers, and we split into several teams. Two crews for two berms, while a few helped Jim continue constructing retaining walls needed to hold the truckloads of dirt required to make a single high speed turn that could accomodate the masses that would come out of the woodwork to ride the trail later. Kevin in the ST-240 continued to push ahead, cutting trail with the machine and along the way, roughed in our rollers, berms and other features. 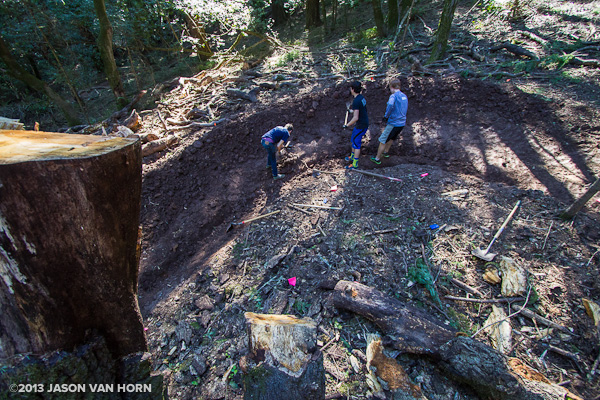 Digging in the inside drainage and adding the berm.

After hours of shoveling and excavating soil, we used a motorized tamper to compact and pack down our turns. If you’ve ever done this work by hand with a shovel and a hand tamper with a piece of carpet or plastic, you would appreciate how awesome this tool is. One pass was often all it took to get the initial compaction in place. 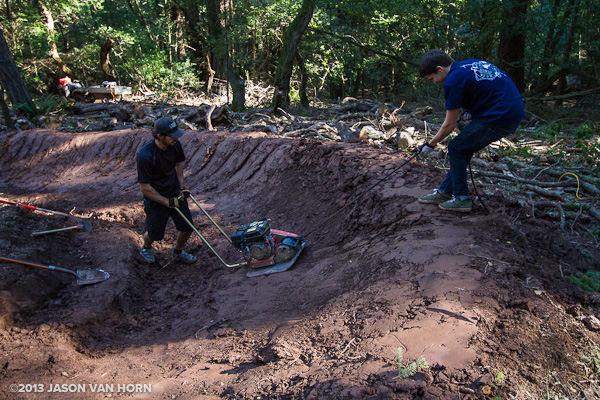 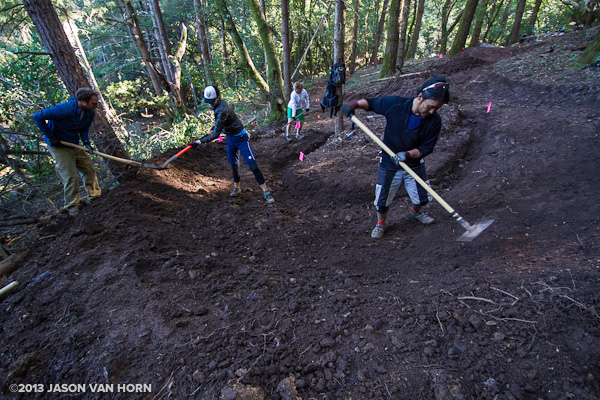 Crew two focused on the turn at the end of the roller filled straight section.

Over the course of the day some of our volunteers left and were replaced by others that came later. A few were only able to help out for a few hours, but any and all help is always appreciated, even if it is just putting your bike down for an hour in the middle of your weekly ride. 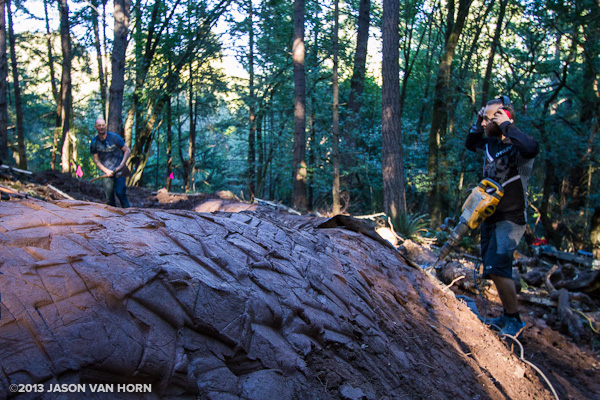 After the tamper, we brought out the vibra-hammer for another pass.

At the end of the day we got to play on our handiwork for the first time. I still can’t stop thinking about how fun it was. Work continues this weekend, and if you come out to help, trail work will be happening on both Saturday and Sunday. If you’re out Sunday, we’ll see you on there. 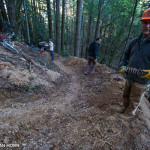 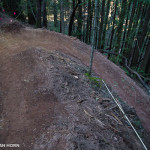 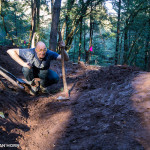 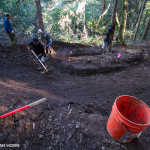 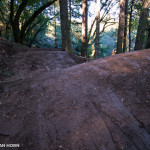 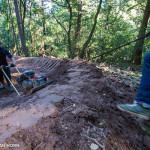 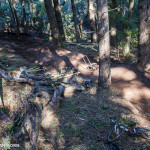 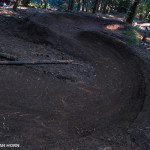 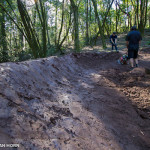 And now, a quick edit from Bike Wente:

Remember, the trail is still closed, and there will be a special spot reserved in hell (as well as a knuckle sandwich if you’re caught poaching by the wrong guy) for those that come out to poach it. If you don’t plan to help, as least don’t come out and make more work for us by riding it and creating ruts in soft spots as well as generate a lot of resentment, and negative trail karma. Having to fix and repair that will just delay the opening of the trail.

When will the trail be finished?

Ah- the most popular question. The trail will be done when it is done; we’re hoping by March, as the ST-240 has to go back then; the more help we have, the sooner we all get to ride it.