Construction on the long-awaited Stafford Lake Bike Park in Novato, California is in progress at the moment, and images of massive, shaped mounts of dirt have finally appeared on social media thanks to contractors from IMBA Trail Solutions. Riders have been anticipating updates for months, as news on the progress has been slow to surface, with the last update on the Stafford Lake Bike Park Website dated over five months ago.

According to the Marin County Parks website, work resumed May 15th, with Phase 1 trails scheduled to be completed mid-summer 2015 and a targeted opening date in August. We’ve all heard that before, so to verify it, we drove up to document the construction. Click through for lots more photos… 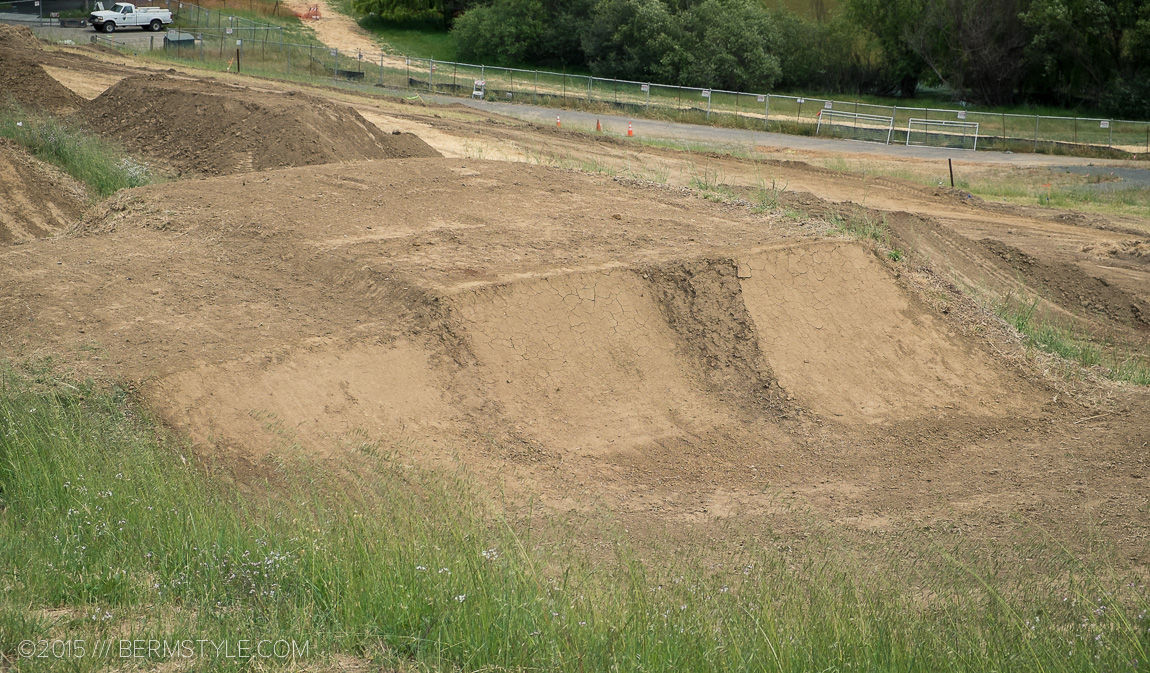 The first set in the progressive jump line.

A lot of riders — ourselves included — have been concerned about the quality of the finished product after hearing news that the county would be doing much of the work themselves. Although they’re working off construction documents provided by Hilride, (the company that oversaw the park design) we’ve seen and ridden more than a few bike parks that were less than inspiring.

Fortunately, the county has brought in experienced pros to consult for the bike features. For the initial construction of the main jump line, IMBA Trail Solutions was hired to consult. As they’re juggling a few projects at the moment, and knowing how important Stafford is, they brought in some extra manpower to fill out their crew: Flowride Concepts. Positive news for sure. 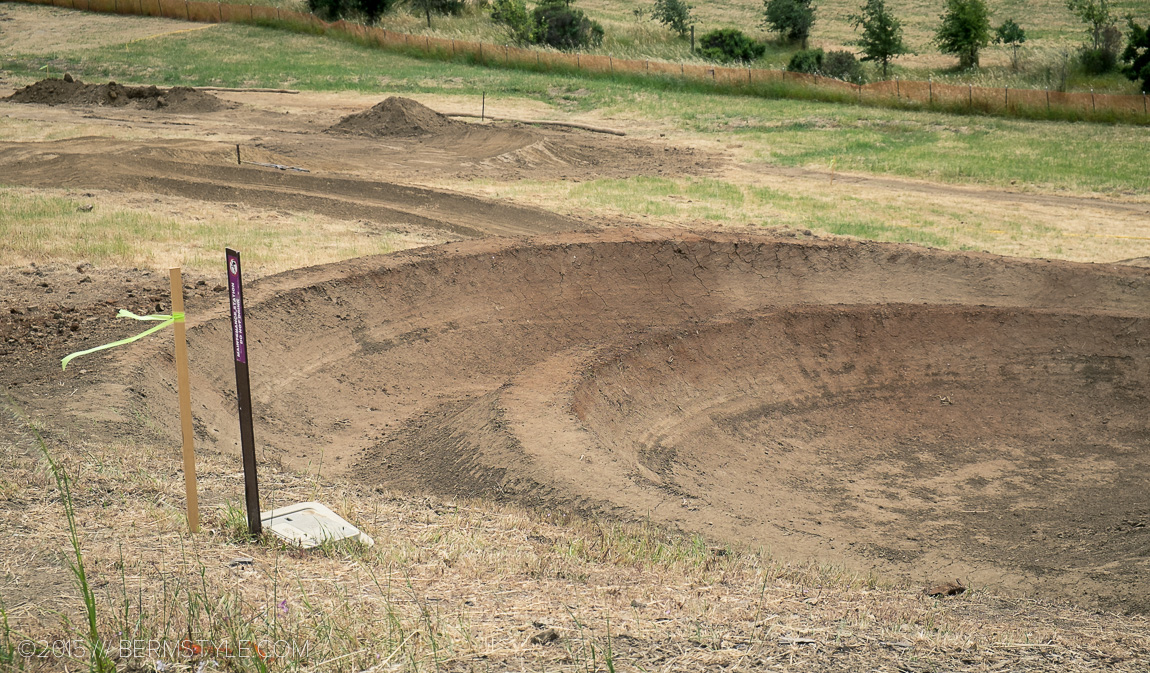 Dual slalom is coming back to the Bay Area…

We reached out to Trail Solutions to get a bit more insight on what was happening, and according to Chris Bernhardt, IMBA Trail Solutions Director, “Marin County wanted to make sure the dual slalom course was top-notch so we brought in Randy Spangler, Chris Orr, and Flowride. The crew has been building a sweet, fast track that’ll spawn legendary local grudge matches for years to come.” 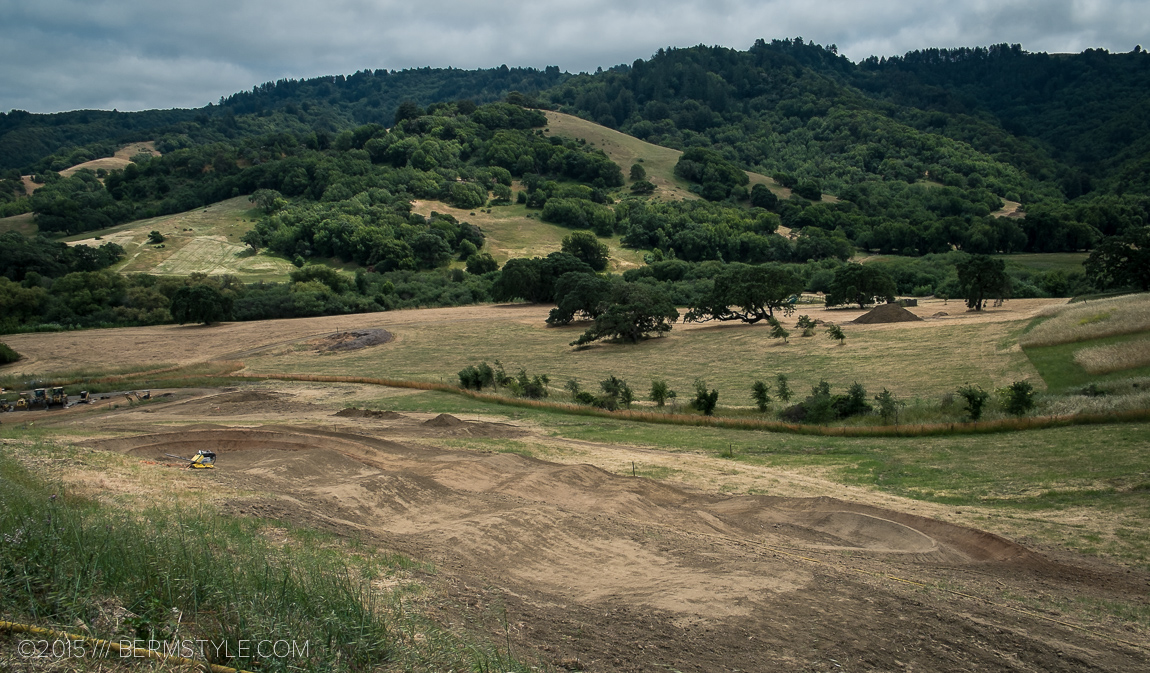 View from the starting point of the dual slalom course.

When we got wind that IMBA Trail Solutions Contractors were onsite consulting and overseeing construction of the slalom course, and that Randy Spangler was on hand as one of the builders, we breathed an audible sigh of relief. If you’ve never heard of Randy, he’s one of the dudes in this old school bike video hitting the rather fat booters.

I guess what I’m saying is, dude knows how to ride a bike. He’s also had a big hand in creating many of the pump tracks in the demo zone at Sea Otter over the years.

Chris Orr of Trail Solutions adds, “FYI – Randy Spangler is also the head builder at Rampage, designed much of the Valmont, Truckee and other bike parks around the U.S. IMBA has crew that does way more than flow trails…” 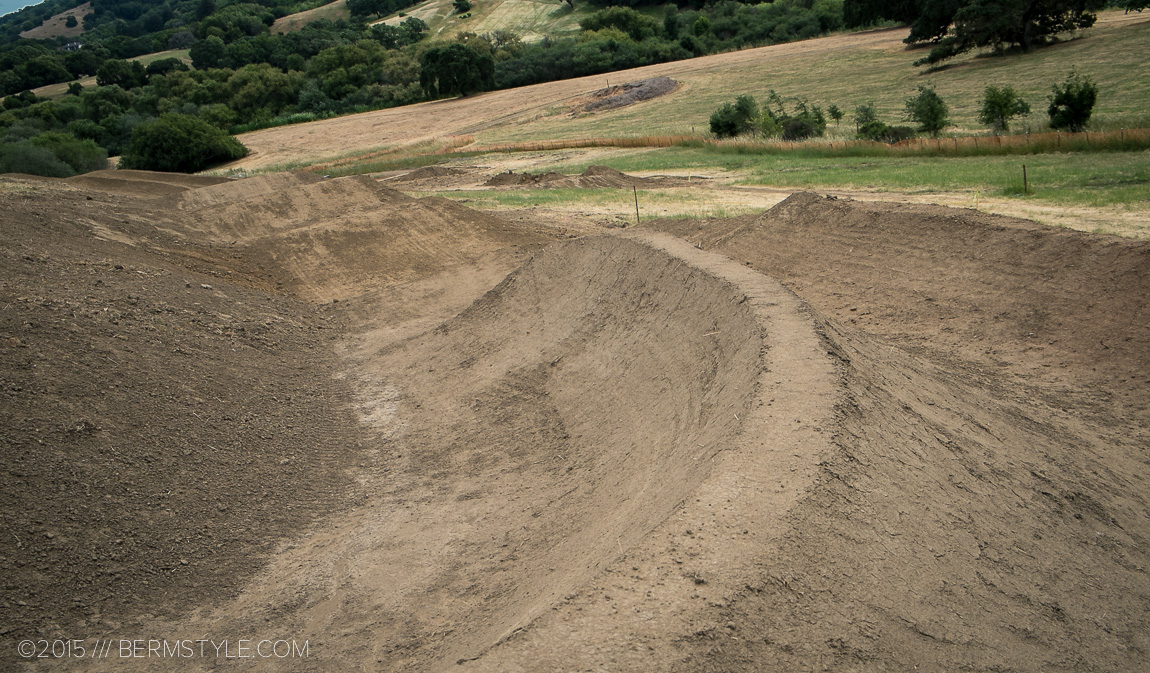 Bottom line, from what we’re seeing and hearing, the bike park should ride like a park built and designed by riders. (As opposed to a park designed for bikes by skate boarders, like Calabasas in San Jose, which has always been a disappointment) 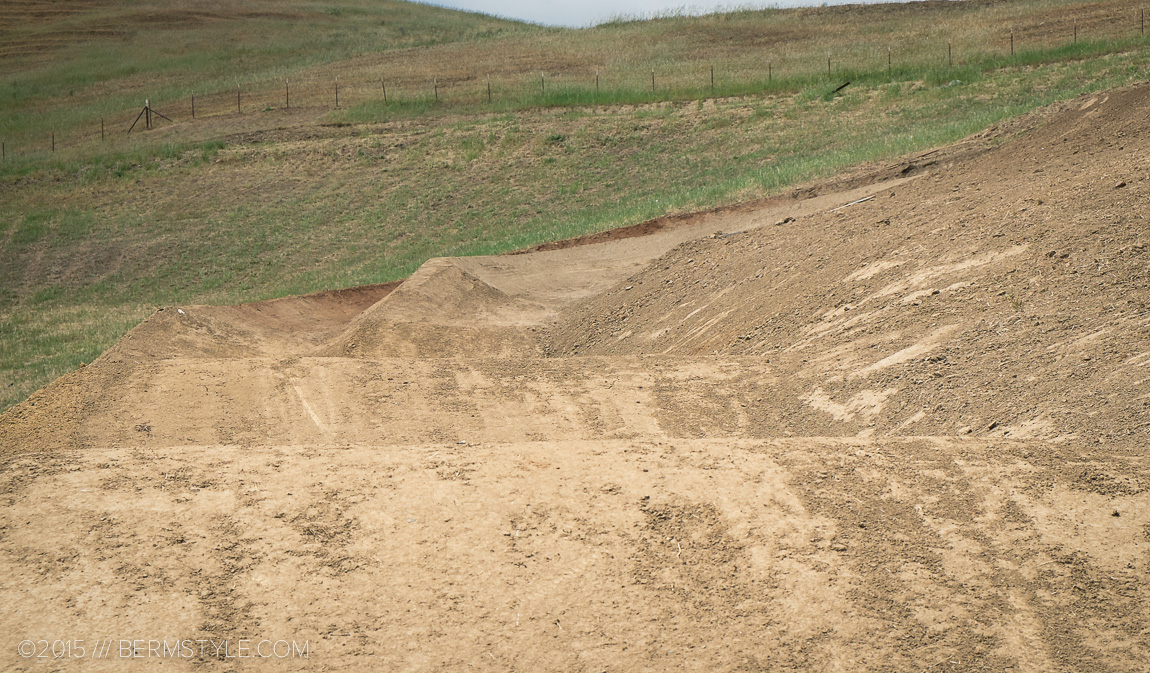 Looking up at the exit of the previous corner.

The dual slalom course looks like its going to be pretty sweet. The track drops a ton of elevation, and if you don’t have a front brake on your dirt jumper, you’re going to want one. 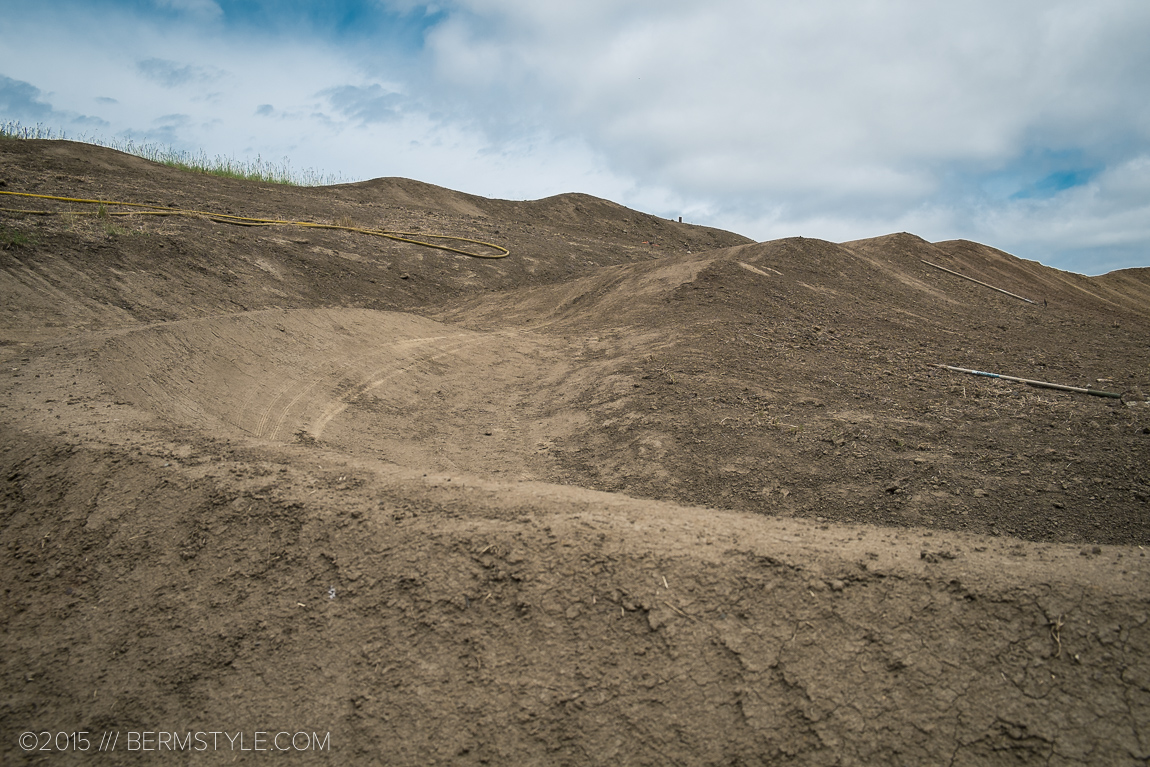 The slalom course looks like its going to be fast and fun. 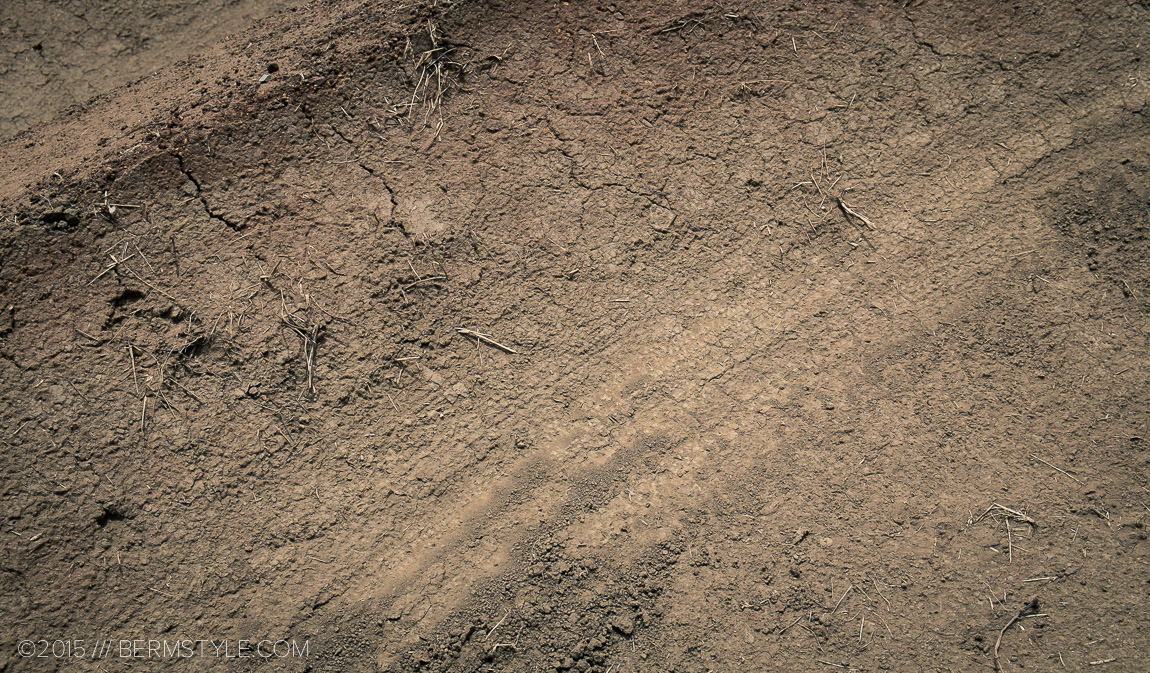 The crew has clearly been doing some testing and flow checking. 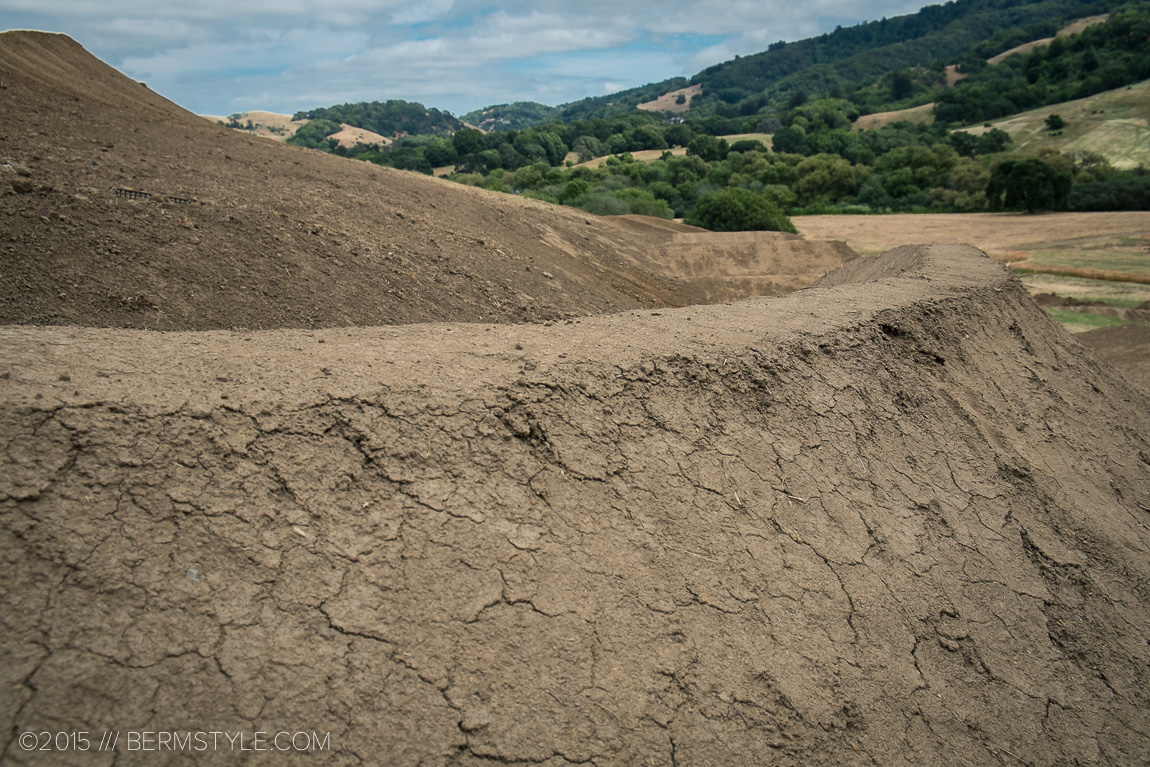 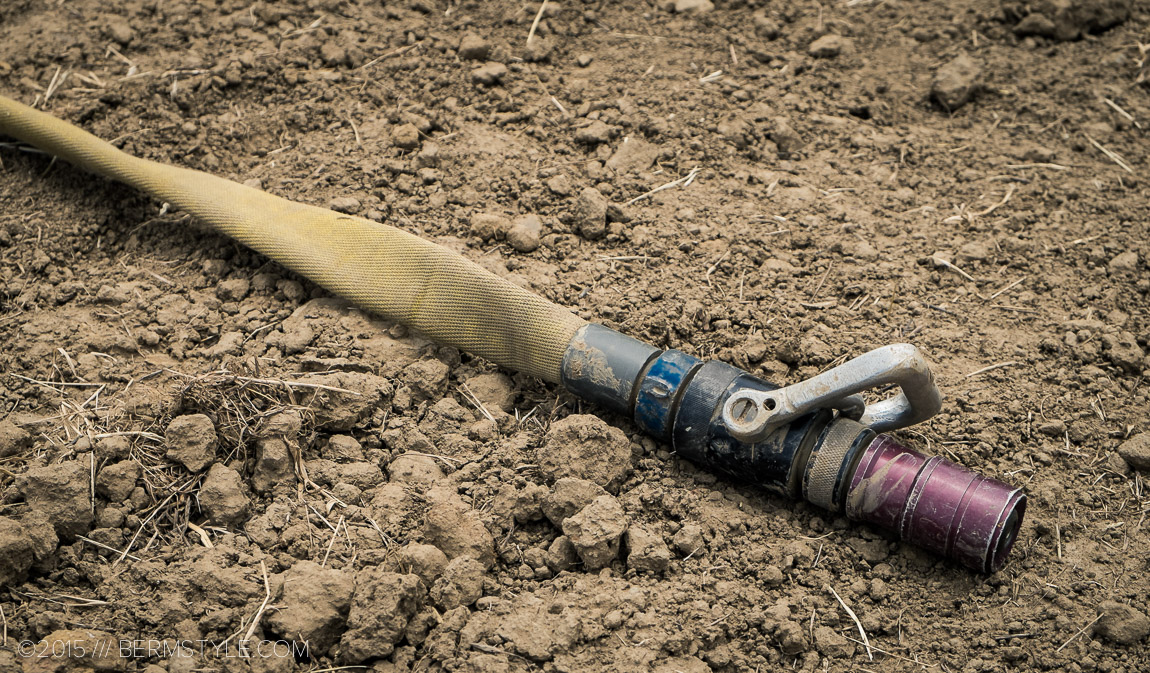 There are a number of irrigation points with hoses set. Assuming of course we have water left by the time the park opens… 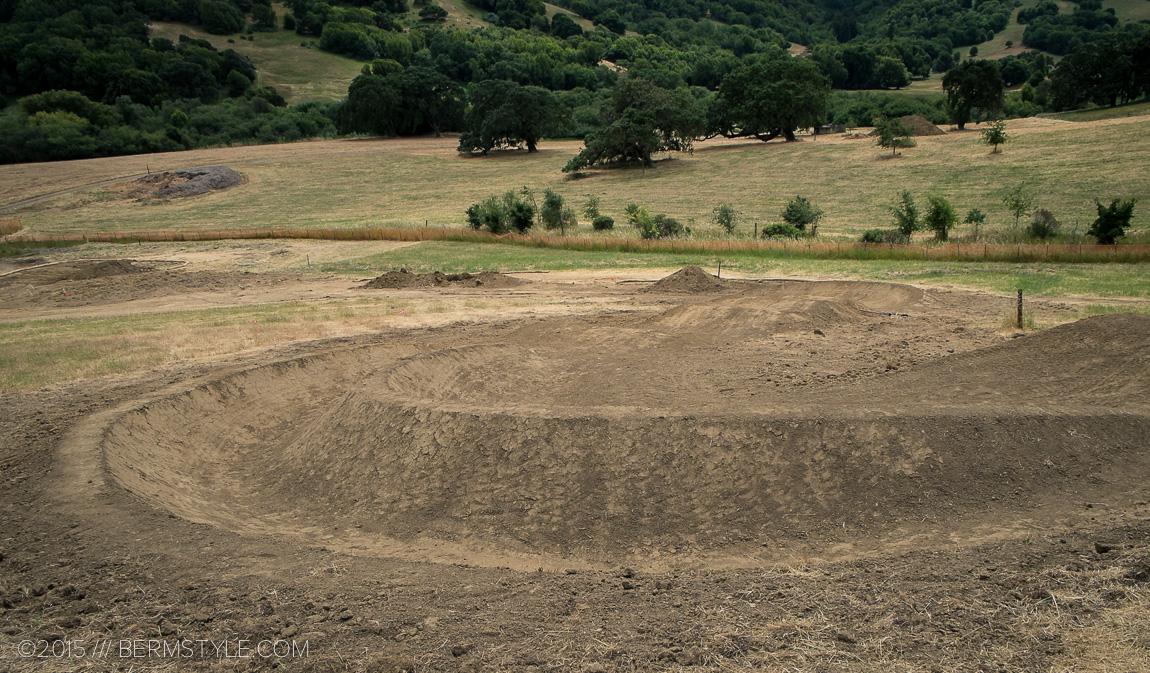 Berms for days. And a rhythm section. 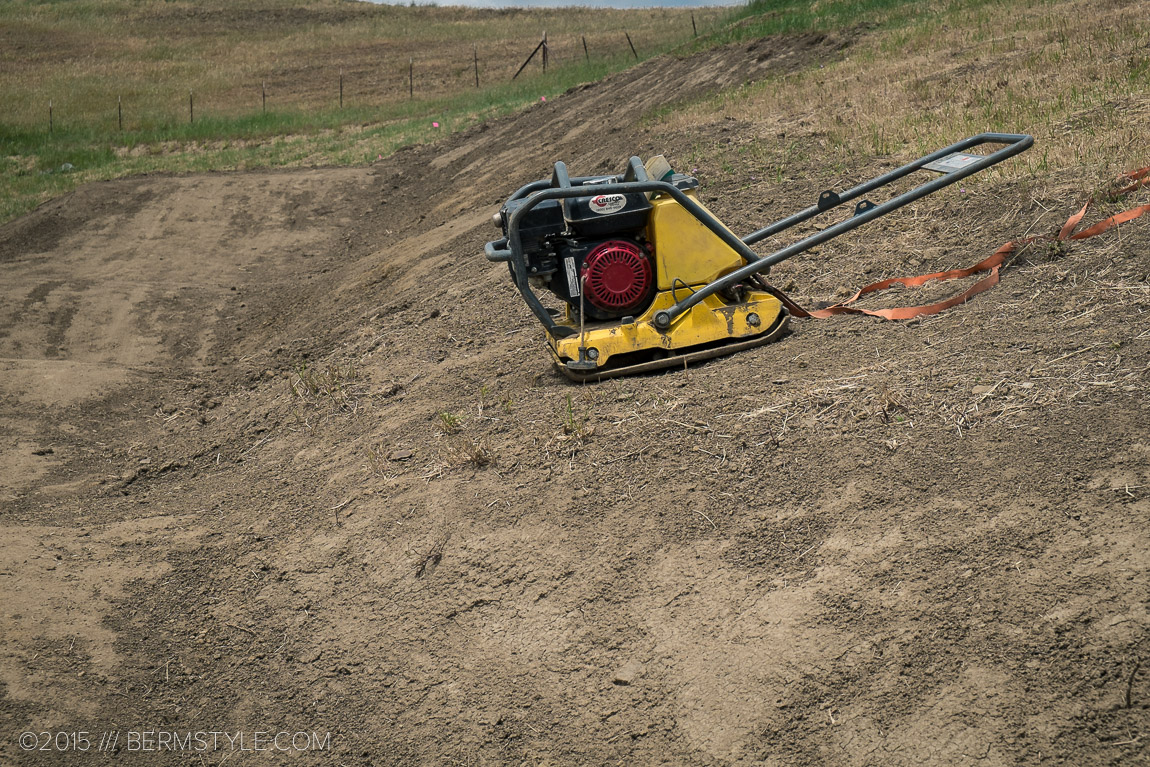 Tools of the trade.

We have a good feeling about the slalom course. But what about the jump line? 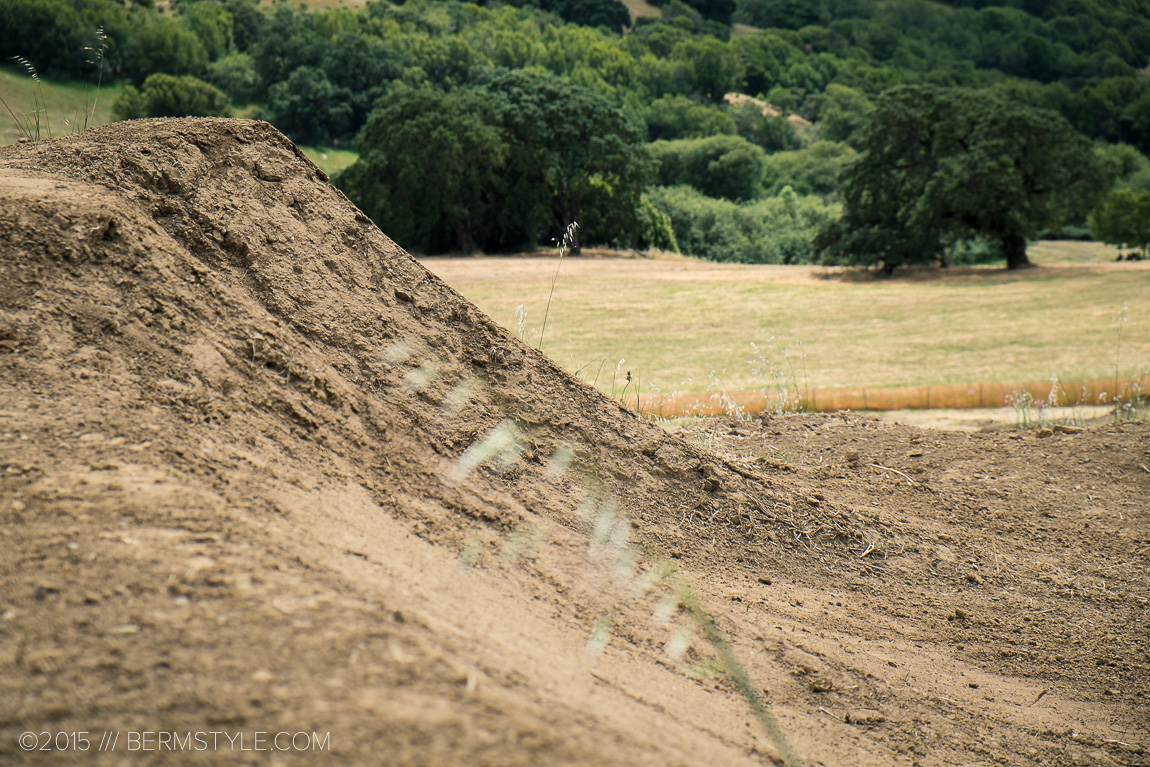 We just got a message back from Chris, and while the jump line is still a work in progress, it’s good to hear a positive update: “The start of the jump line as you saw is starting to shape up with some direction to the county… the rest of the jump line – we might be back to fix the timing and rhythm on the the stuff the county is building. -COrr” 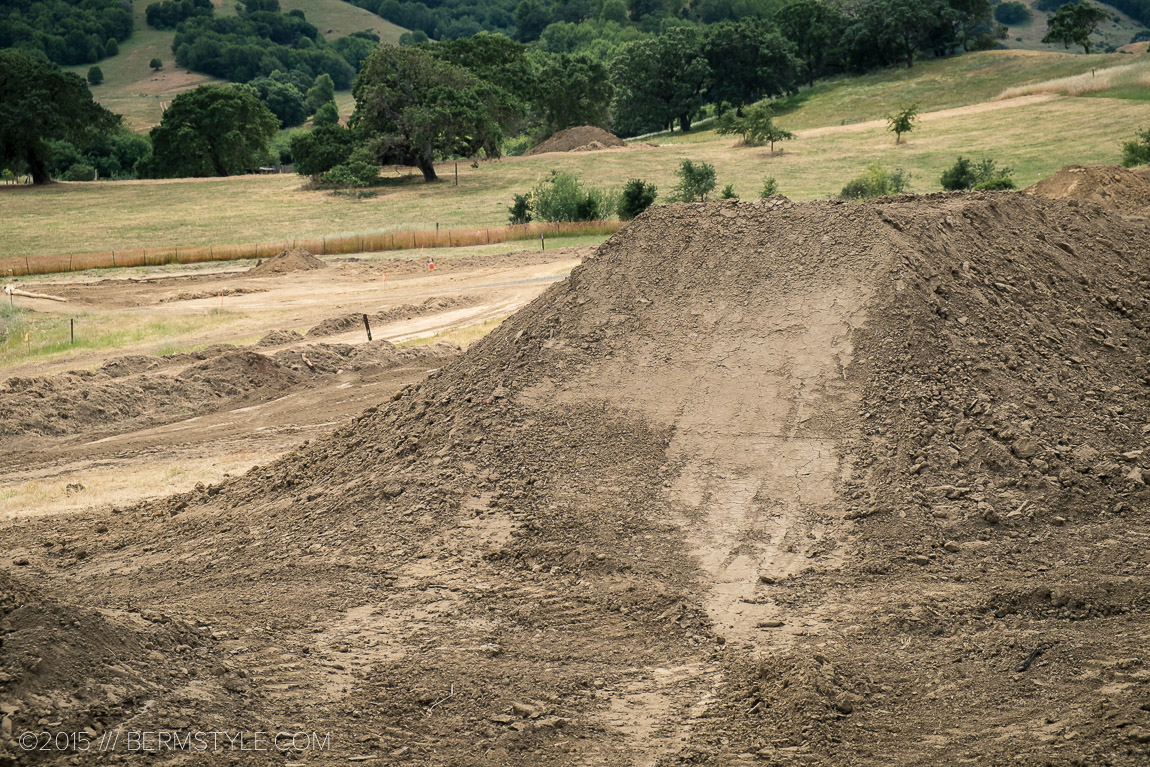 This is a sizable mound of dirt. An extremely positive sign. 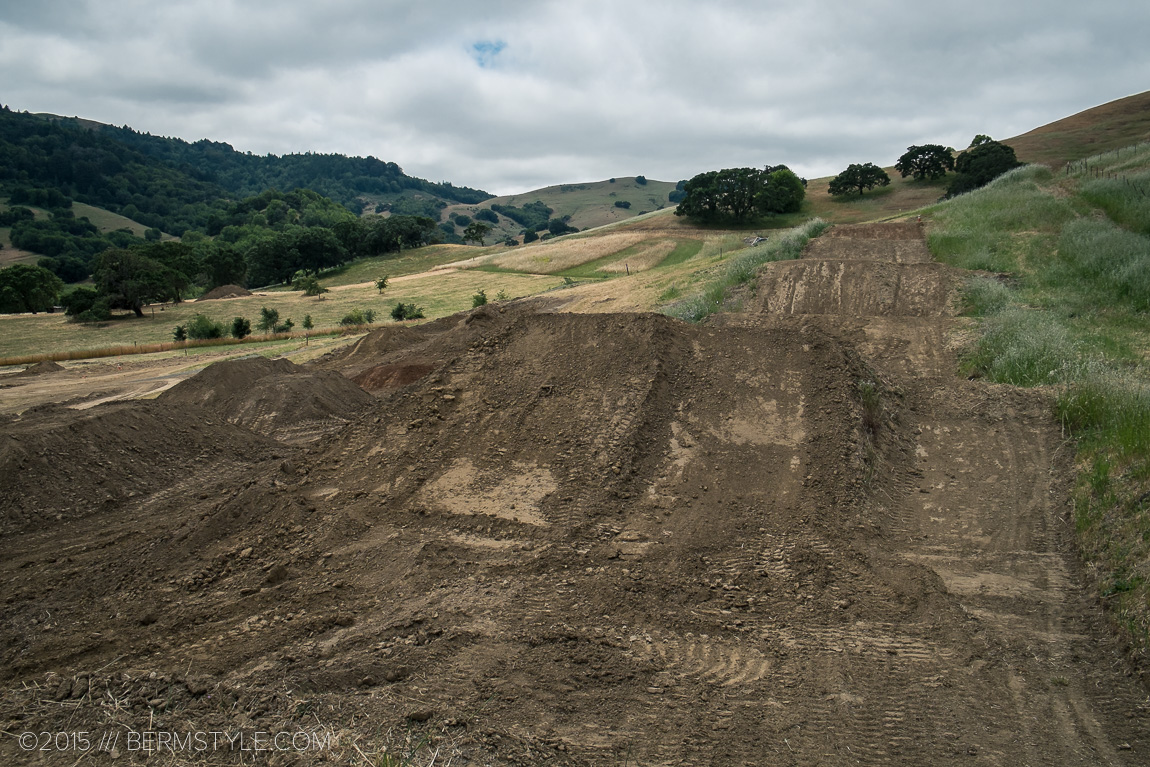 Same mound, viewed from a bit further back. 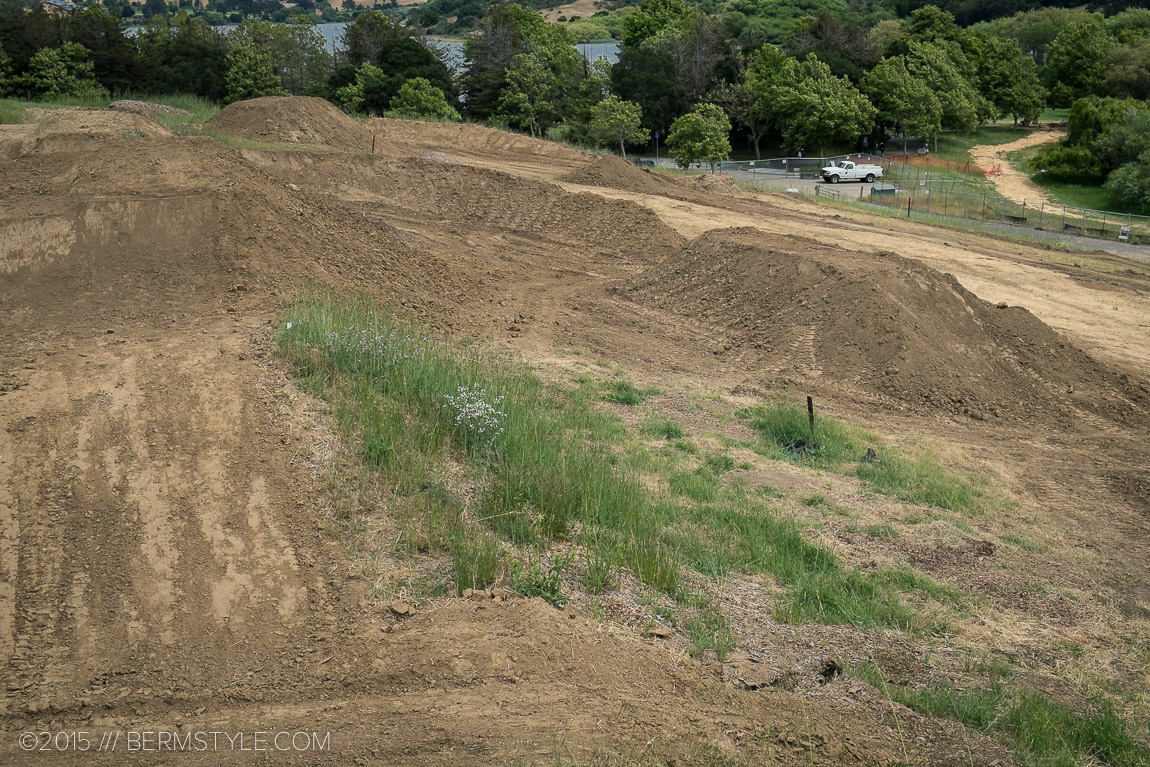 After the third set the track splits off, presumably into different levels of difficulty. 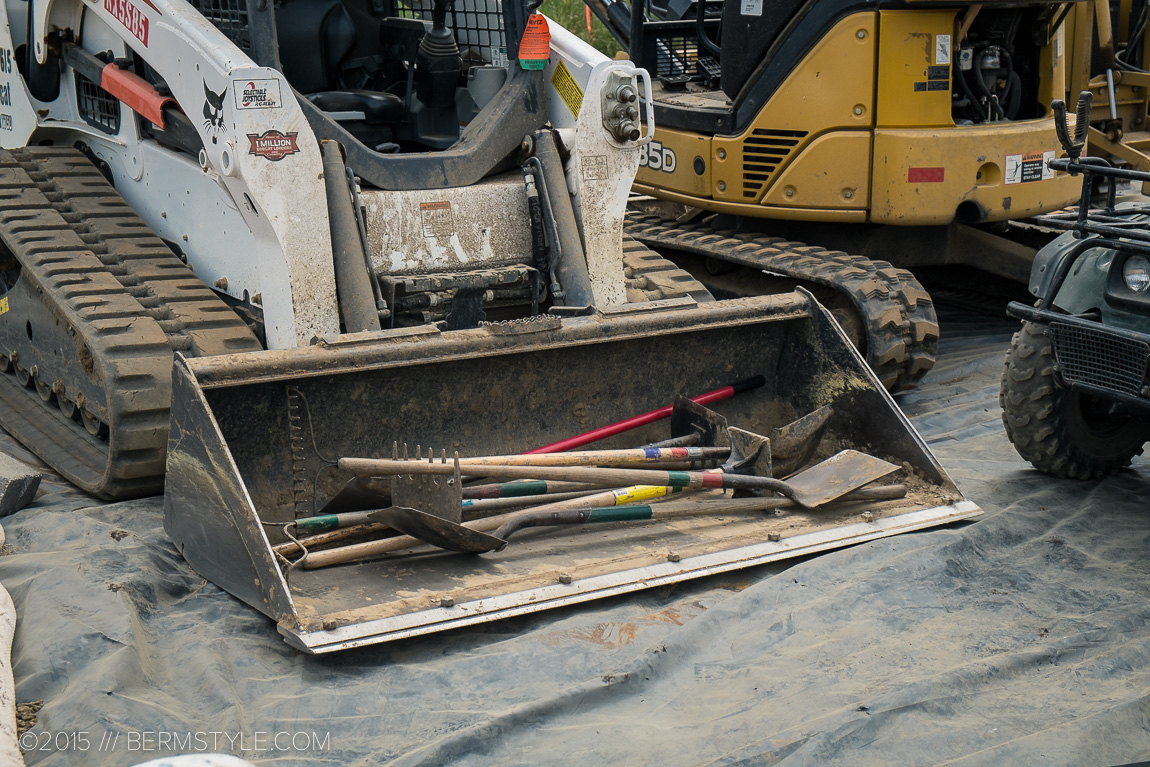 There’s no shortage of the proper tools for the job. 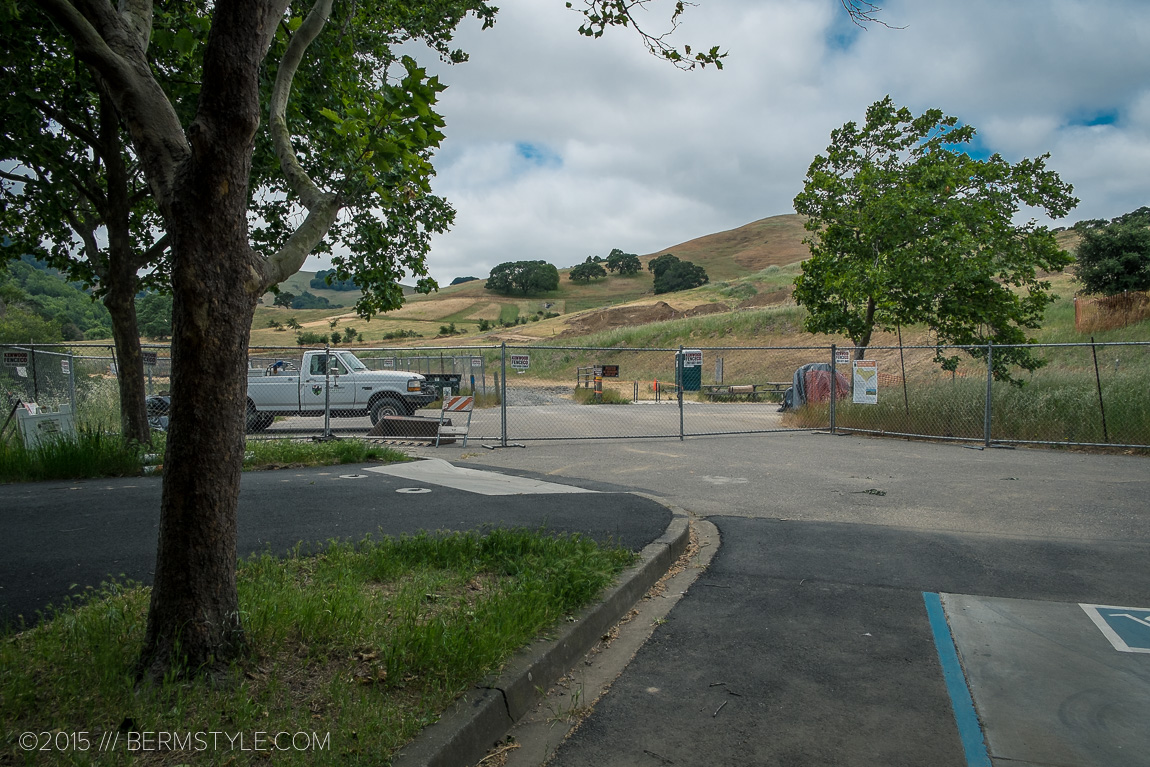 View from the parking lot.

We’ll post more updates when we have them, but hopefully we’re all riding the park come fall.

On a final note, this should be obvious, but sneaking in to ride this stuff is a bad idea, and only serves to piss the wrong people off. Plus the result would likely only delay the completion of the park.

Questions, comments and more, leave them below.