There’s no reason to keep those tore up and beat down gloves around when a fresh pair can be had for just a few bucks. Save the old ones for crappy weather, or dig days, and move on. Like a good set of fresh grips, a good new pair of gloves make a big difference in a day of riding.

When it comes to a new set of gloves, we’ve got two basic requirements. They need to fit. Not too long, but not too short, lest our fingers wear through the ends prematurely. And secondly, they need to hold up. Our favorite gloves get a massive amount of abuse. The faves get chosen again and again, and then thrown back in the gear bag wet and sweaty. Hopefully we remember to pull them out and let them air dry before they start to stink, occasionally hand washing them. Or when they get really bad, adding them to a laundry load that includes shorts and stinky knee pads.

The DJ and DND gloves we received from Giro surpass both these requirements. They fit and have held up well. At $35 (DJ) and $26 (DND) MSRP, they’re both priced well too. 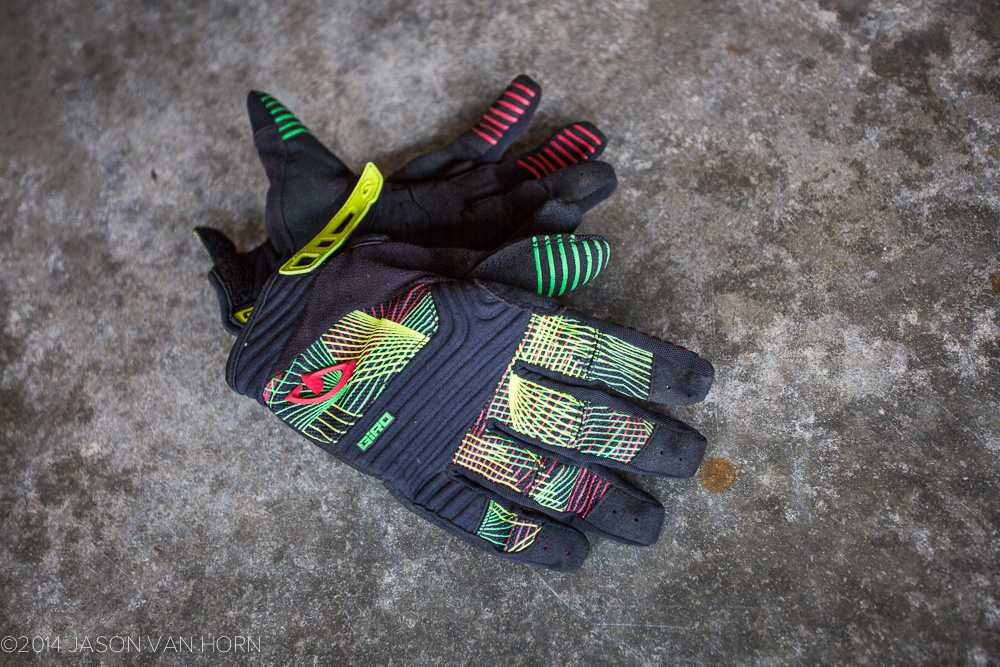 The DJ at $35 is the higher priced of the two, and for the additional cost also includes a velcro closure. In line with the DJ theme, the palm has a bit of additional padding. The padded area is implemented quite well, and although there is extra protection, it doesn’t feel bulky and isn’t really noticeable. The backside of the thumb also includes a microfiber wiping surface that’s easy on your nose. 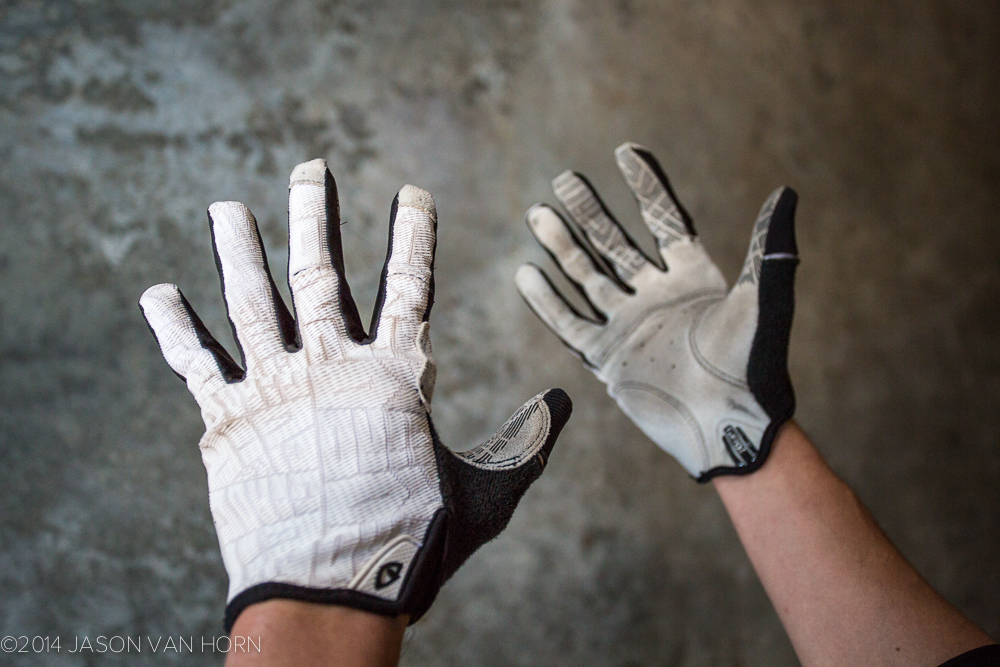 At $26, the DND glove rules its price point. The fit is solid like the DJ and although it lacks the velcro strap, it still fits great. My closet is home to a few pairs of gloves in this price point that feel cheap, and still look unused- because they are only used as a last resort. The DND doesn’t feel like a price point glove in anyway. Like the DJ model, it includes a bit of padding in the palm, but it’s implemented equally well, and provides a bit of extra insurance without being noticeable. The inside of the wrist features a tab for pulling the gloves on, and unlike some gloves I’ve owned, I’m comfortable using it to pull the gloves on without fear of the glove coming apart.

In fact, the only downside to the DND gloves sent for for testing was they were white. While white is certainly on trend, and they look great new (and matched the review sample of the Giro Chamber Shoe) unless you have a race team budget for a shiny kit at every event, I’d recommend one of the darker colorways for playing in the dirt. My white test pair was grimy looking after one ride.  It could just be me though – a lot of mountain bikers seem to take to bright and flashy colors so prevalent these days. While I have a few loud kits I rotate in for photos, I’m a fan of the classics. My first picks would be the DND glove in black or the gray/ brown AKA Lead Gum option. 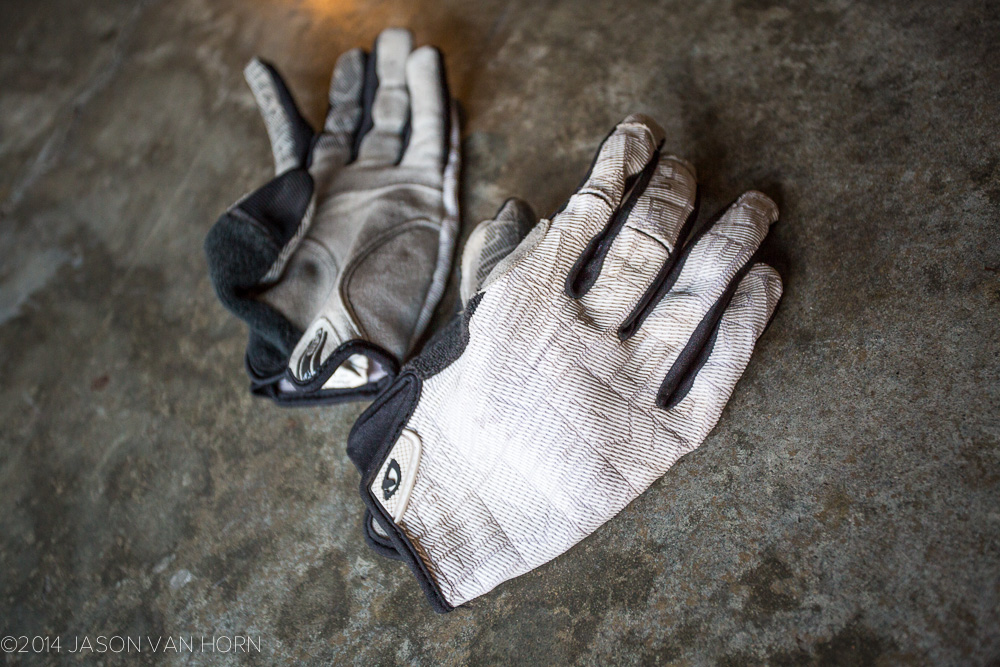 Ironically, the red, green and yellow of the DJ gloves somehow are just subtle enough they seem to pair up well with almost anything.

It’s worth noting the Giro gloves run small; our test models are size large, but fit remarkably well. It was a brief concern when I saw the sizing, as size mediums from most companies are usually spot on for me.  When gloves fit poorly, they can cause blisters, rub skin raw or worse. (worse=not being able to grip the bars securely) However both models fit well, without an excess of fabric in the palm. They nailed it with the pattern— these gloves are designed to grip bars.

They pass the durability test as well. Months later, they’re still going strong, despite a few tumbles and trips through the washing machine. Ironically we’ve had gloves fail at seams simply from pulling them on and off. Often the failure takes place at the perforated areas that part, as if by design. Although the Giro models have a few vent holes, it hasn’t been an issue. The perforations are minimal and spaced out enough to avoid being an problem. 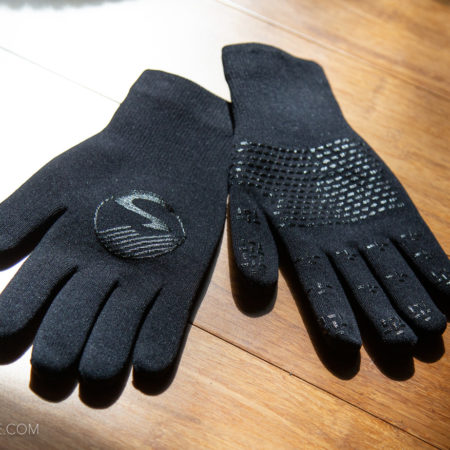 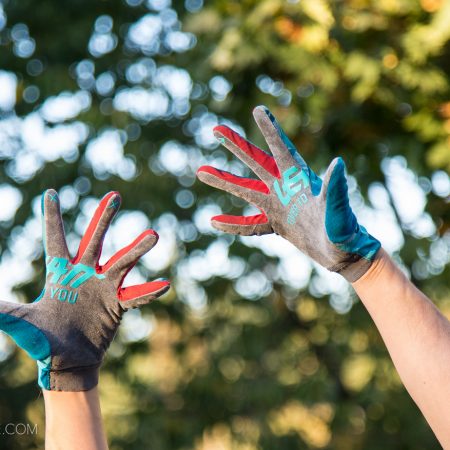 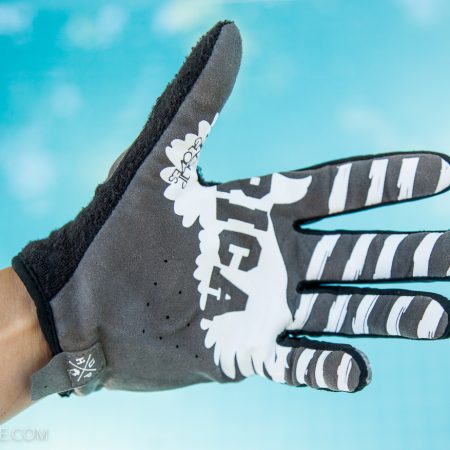 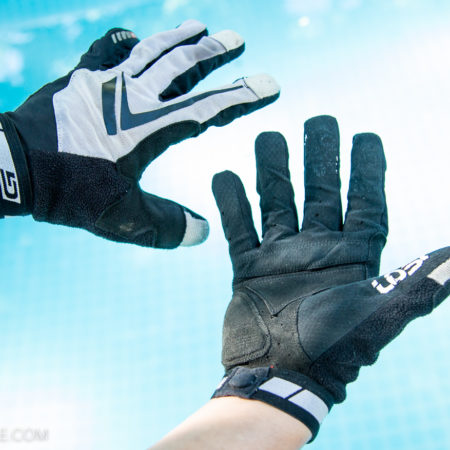