We first reported on the Salem, Oregon jumps and BMX track when we passed by the fairgrounds after the Black Rock Shuttle Day. As I was injured from a crash at Black Rock, I was unable to do anything but take a few photos. Fortunately I was able to get down for an afternoon shred session before splitting town. As we were there on a Saturday, the facility were buzzing with activity. Gate starts and racing were about to go down on the BMX track, but we got some good laps in before the race action started. 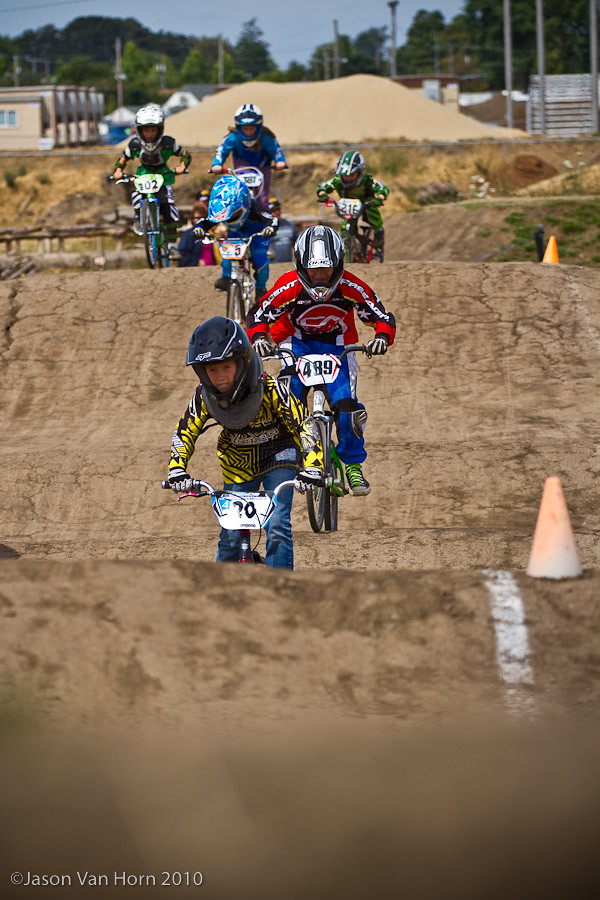 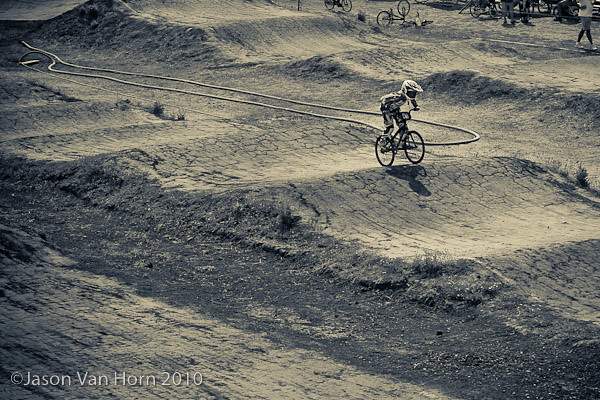 Lone BMX action on the rhythm section- where the pump track craze all began.

And since they were there, we sessioned the technical skinny features for a minute. I’m not a big fan of elevated technical trail features unless they are part of the natural flow of a trail, but done well, they can be fun. 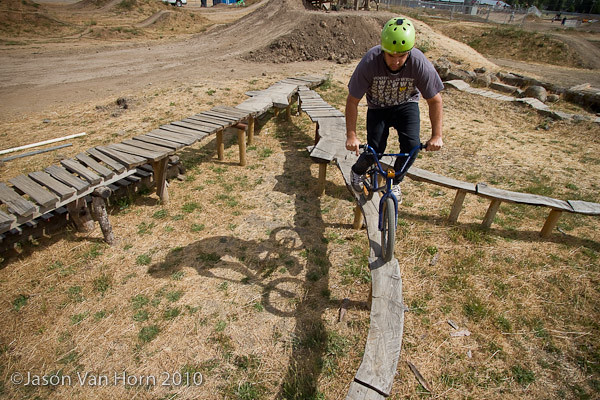 It is a bit weird to see a 20″ ride elevated wood. Barrett P models on the skinny

After dinking around for a few on the wood stuff, we moved on to the pump track. It is a pretty basic line, but the space has a massive amount of potential. The rollers are a bit rough and could use some sculpting, but it was easy enough to pump our way through the line at speed without the need to pedal. We didn’t spend a lot of time on it, but I would be surprised if this track wasn’t dialed in by next season. My favorite feature was the start hill, as it doubles as a hip and a quarter pipe, which we of course sessioned as such. 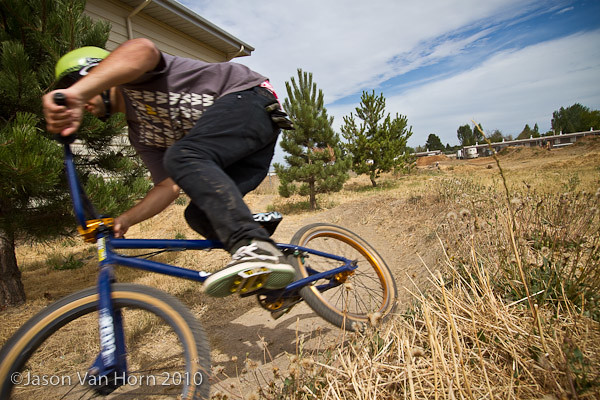 Barrett on the pump track 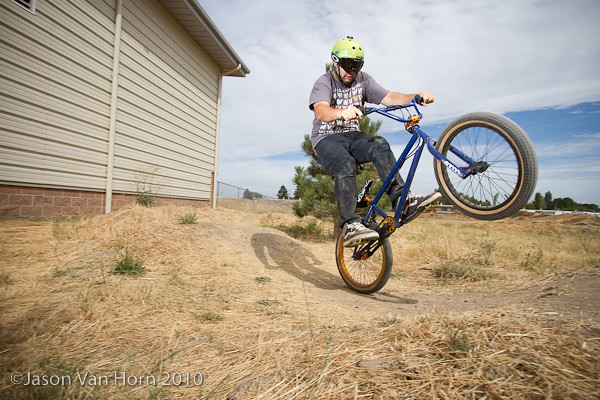 Barrett bucks the trends, rocking googles with the dj lid, while riding a BMX. Manual in the pump track.

As it lies, I wasn’t terribly excited about the pump track given its current condition, but the beauty of the pump track is that it can be whatever you make of it. It definitely is a long line, but it is basically just a single loop, which limits the user experience. I’m more a fan of multiple line choices and transfer lines, but again, it is a good start. (You can change it up if you 180 on the starting hill and come back the other way.)

We spent the majority of our time sessioning the dirt jump lines. The boys at BRMBA clearly have the most passion for the jumps, and put the majority of their time into this section. In fact, Rich and a few other guys showed up to put some time in doing maintenance before a session, and we had a chance to get some of the scoop on their relationship with Oregon State Parks. 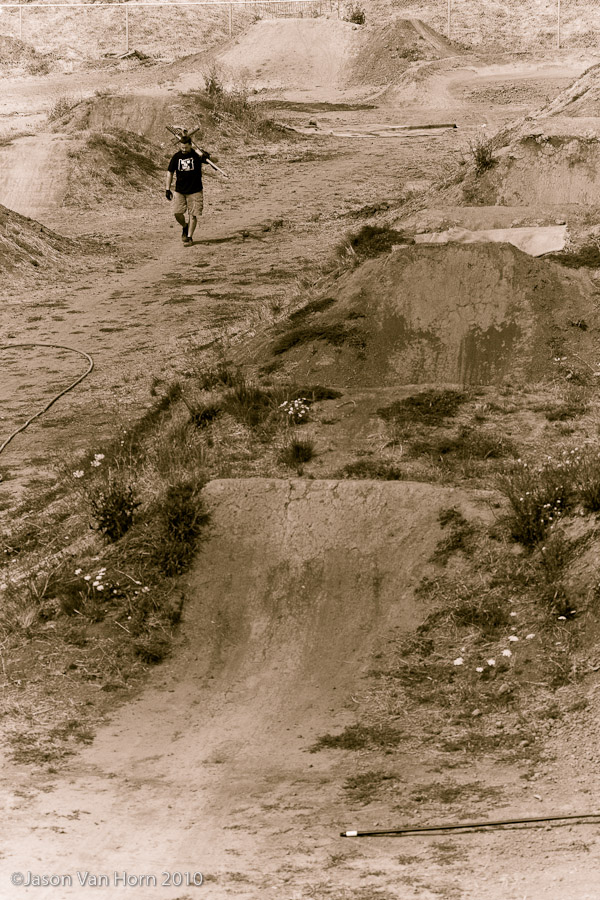 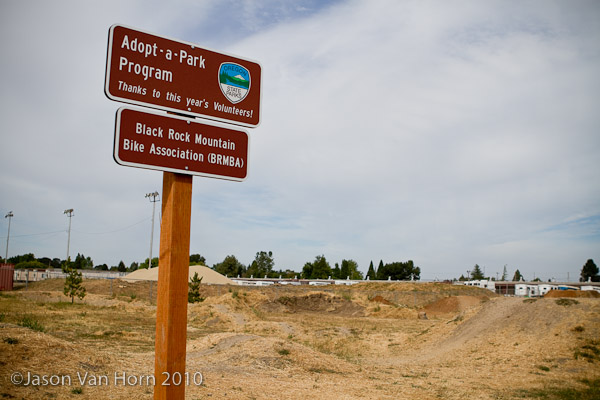 BRMBA, the Black Rock Mountain Bike Association maintains the jump park through the adopt-a-park program. It is essentially a similar relationship to what the NWTA (Northwest Trail Alliance) hopes to create with Tualiton Valley Parks and Rec with the Eichler Park site in Beaverton, Oregon. The entire bike park area is built and maintained by volunteers. It isn’t all all fun though, as Rich went on to explain his frustration with kids rolling the lips on the intermediate and advanced lines- lips which take hours to shape and maintain. Not to mention riders that ride the park when wet, creating even more work for our unpaid and unsung volunteers.

The jumps are essentially doubles, but are for the most part filled in. The idea is that the jumps aren’t rollable, but for a jumper with a rusty skillset (or a rider looking to take his skills to the next level) in an emergency situation, they can be ridden over. The landings are built large and essentially serve as large case pads for sloppy landings. Fortunately, they do have a mini-dozer on site that handles the bulk of the earth moving, and an adequate water supply. Like all spots, the jumps are maintained by a small dedicated group, and utilized by many. 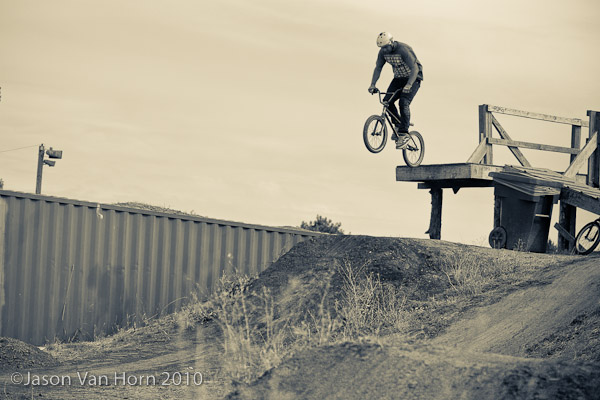 Barrett drops into the advanced line from the starting platform

The jump lines are pretty sweet though. An elevated starting platform not only provides speed for the first jump, but acts as a “squirrel catcher,” or skills filter. I found you could also use the starting platform to transfer to the intermediate line as well. 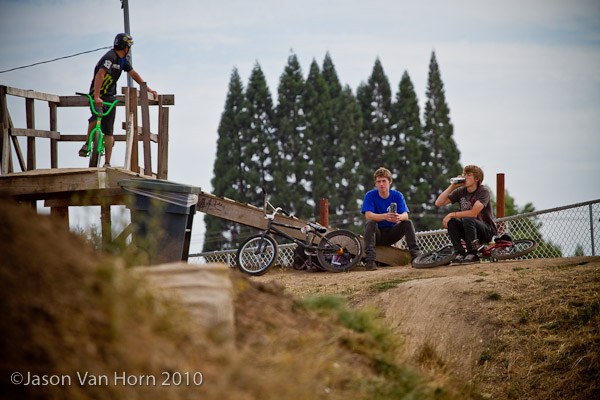 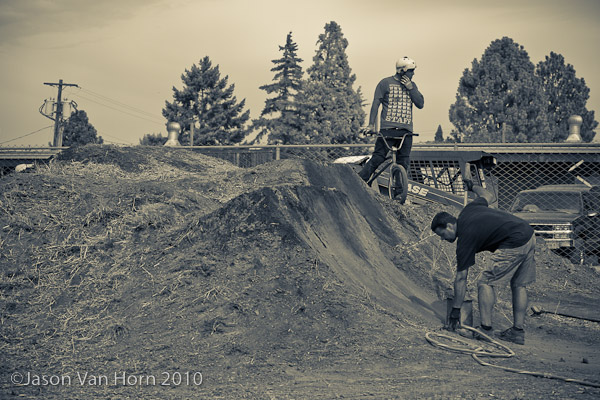 It takes time and effort to keep lips hitting this well. Rich, hard at work. 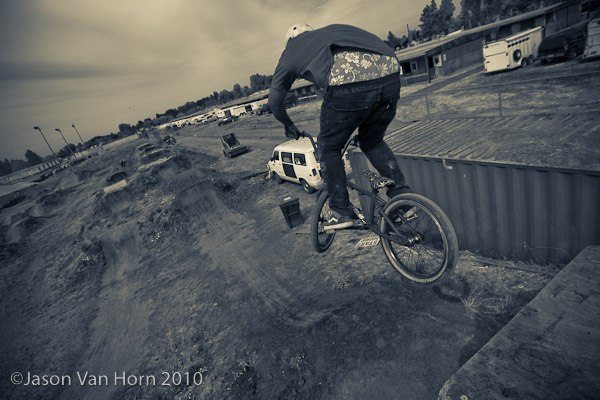 Huck that drop, B! 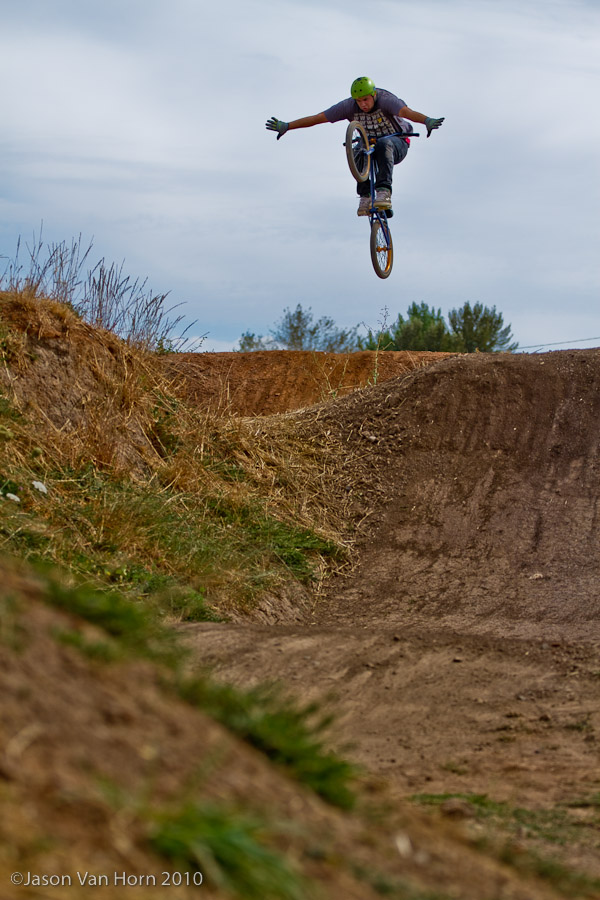 Barrett P with the ever classic tuck no-hander

The Salem Expo Bike Park has a bit of something for riders of every skill level and ability. At less than an hours travel from Portland, we definitely recommend making the trek.

For directions, check out our previous post here. Thanks to Barrett Polychronis of the Northwest School of Freeride for being our jump tester and model.