Last time we saw AT, we were speeding down the freeway on the way back to the states from Crankworks. He’s been busy living the dream- traveling all over to check out new places, all to ride his bike, while getting paid to do it. In fact, his new signature colorway of components from FSA was just released at Interbike last week- you know you’re doing well when your bike parts all have your name etched on them. We caught up to him at Northstar this weekend where he and housemate Greg Watts were sessioning the bike park and getting some time in on their big bikes before heading down to Virgin Utah for the Red Bull Rampage. After catching up a bit, we checked out his newest ride from main sponsor Marin Bikes. The first thing we noticed? It doesn’t have bright neon bars or rims. While photogenic, the bright neon is definitely loud. His big bike on the other hand, is definitely a bit more subdued, with the baby blue motif carrying through to the graphics on his SDG saddle.  (he still sports the bright yellow on his hardtail)

For his new long travel steed, AT was sporting the new production Marin Bikes 2011 Team DH. It wasn’t obvious, but this thing boasts 10 inches of rear wheel travel via Marin’s 4-Bar 4 bolt system. That should be pretty handy next week when he’ll be stomping huge drops at the Rampage.

His ride is spec’d out with parts from his other parts sponsors: FSA, SDG, and X-Fusion. Since X-Fusion doesn’t make a DH fork, he’s currently running a Rock Shox Boxxer sans decals.

Since graduating high school, AT has been living the dream, riding bikes professionally on the Slopestyle circuit. I remember when he was the just the local ripper, killing it at the local bike park (RampRats) in Petaluma. He’s definitely come a long way since then, and his bag of tricks has grown huge. The coolest thing about Andrew is that although he’s been building his name, and gathering results, (his signature jump comp is going down soon at the SF Expo- check the link here.) he’s still the friendly kid that you used to see down at the dirt jumps, and really has the right demeanor expected of a professional athlete. Of course, that doesn’t really matter if you can’t throw down when it counts.

Check out this short clip Jaymo from NWSOF posted of him at Winter Park.

He currently lives in Santa Cruz, California, home to the majority of the Bay Area rippers. Good luck at Rampage! 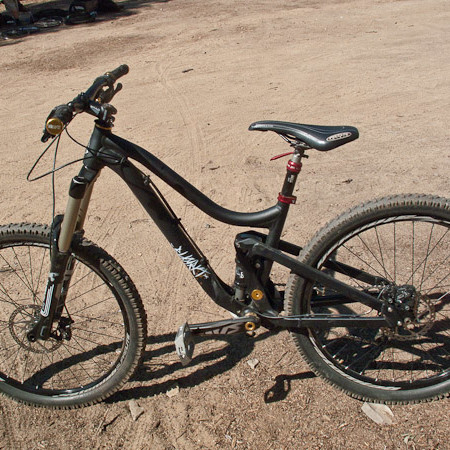