The rebuild of Ventura Park pump track in Portland, Oregon is now underway. When we’re done, the pump track will be better than ever. Thanks to partnerships with the Northwest Trail Alliance and Portland Parks & Rec, the track received three truckloads of additional fill soil.

With the aid of the NWTA Ditchwitch, last week Cole Pruitt and I worked the dirt to address issues with drainage, but more importantly, made some sweet berms. We now need volunteers to come help us pack and shape the features, and create some flow! 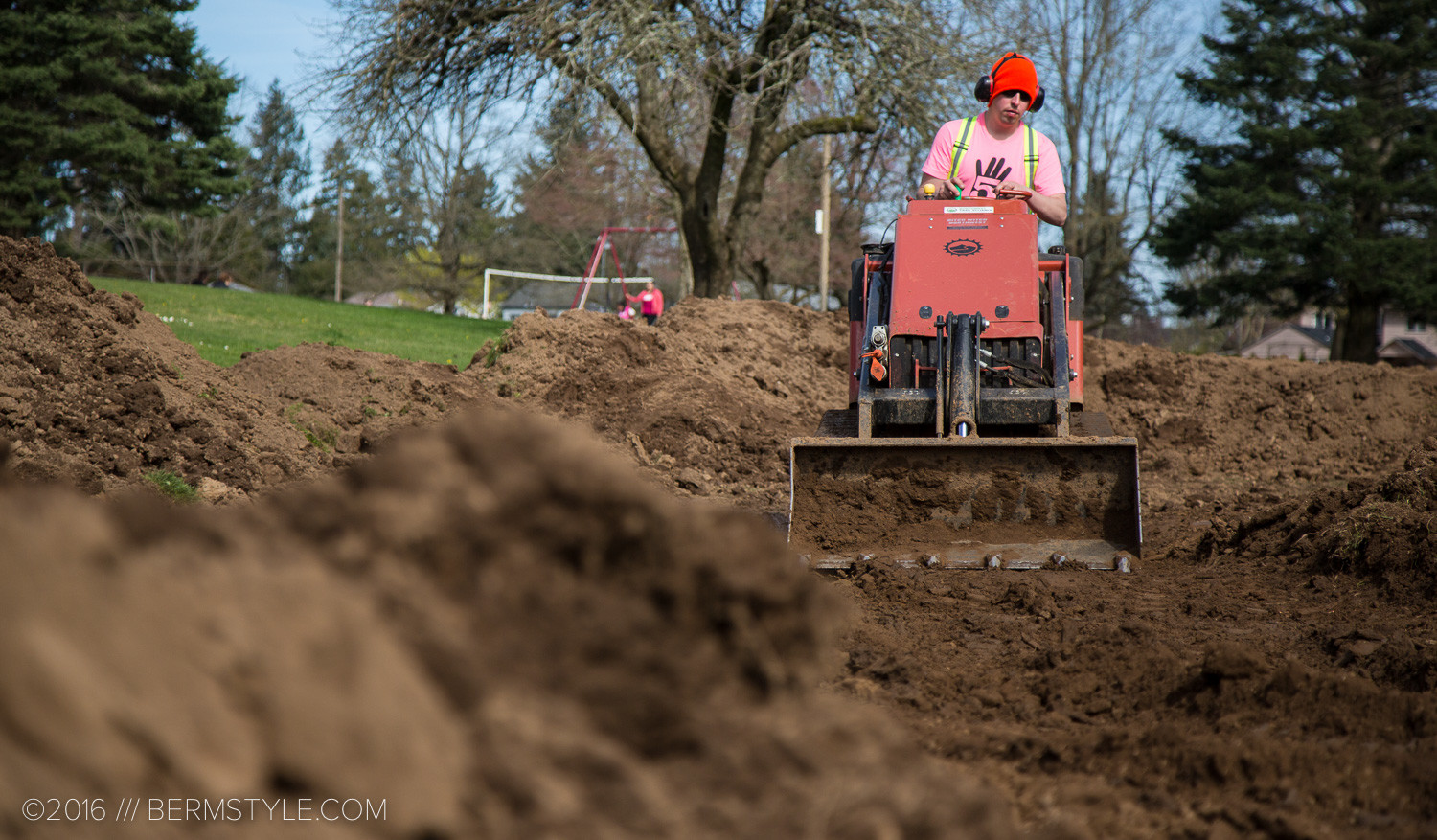 Cole Pruitt representing Team Hi-5 Bikes at the stick of the NWTA Ditchwitch.

Our next official build day is Sunday, April 3rd and we can use your help. The build day is open to the public, and we’ve created a Facebook event to rally the troops.

If you want to have a sweet pump track to ride in Portland, drop a shout in the comments below, and RSVP on the Facebook event. We’ll be gathering at Ventura Park at 10am. It’s located at SE 115th Ave and SE Stark St, Portland, Oregon 97216.

In addition to working on the track, we’ll discuss what we’re doing, why we’re doing it, and how we’ll create a progressive riding experience for all ages and levels of riders. 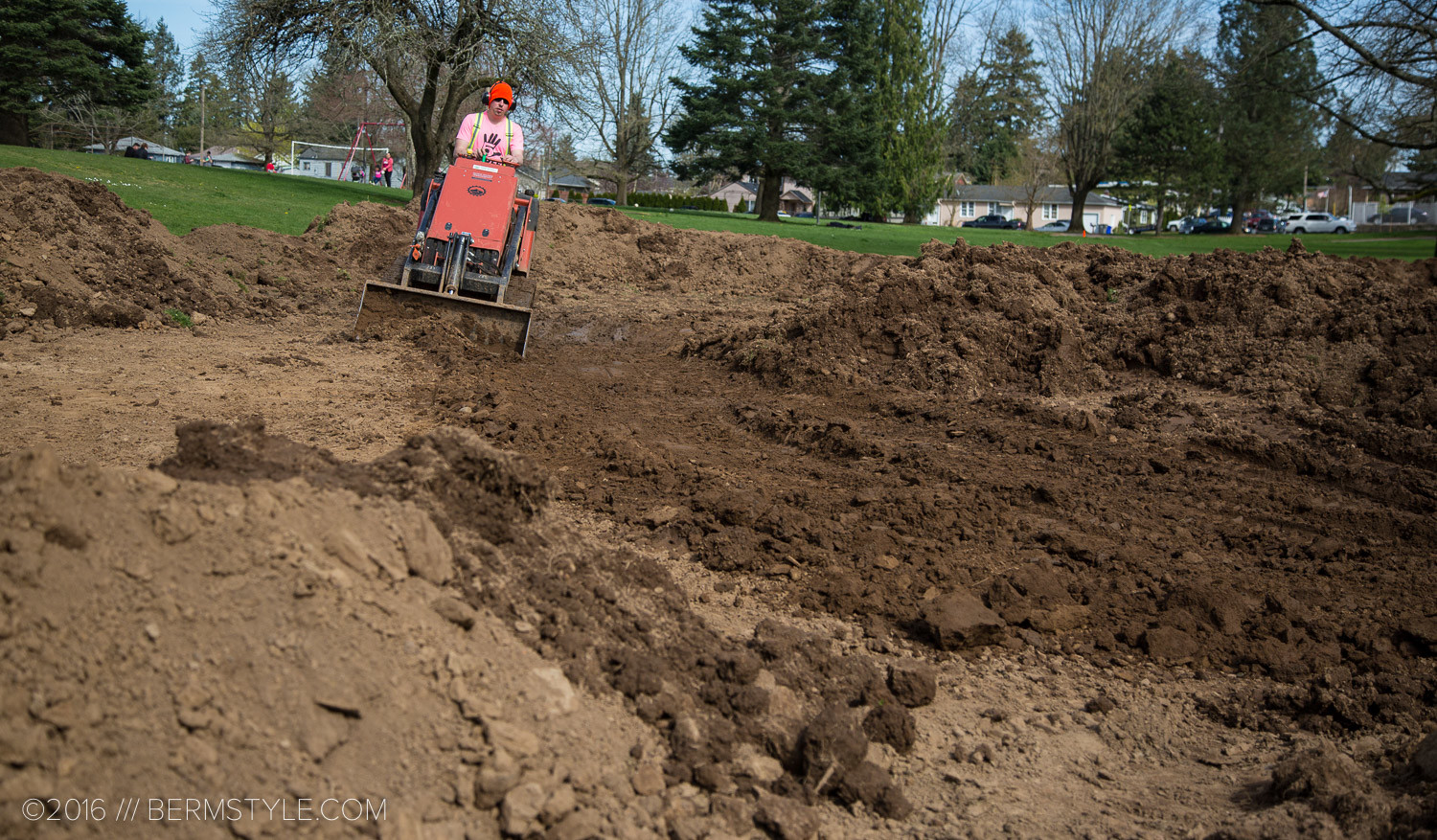 Attempting to address some of the drainage issues with some grading.

If you’re a local area resident, you’d undoubtedly noticed the huge stacks of dirt covering parts of the pump track and wondered what’s going on. We’ll be documenting our progress here and on our Facebook page.

For those interested, here’s how we got to where we are:

It all began last summer when we moved back to Portland. I’d visited the park on a number of occasions but didn’t ride it as it wasn’t in very good condition. I checked on it throughout summer, and into the fall. I didn’t once see evidence of any maintenance being performed.

After the rains began I came over with some tools and began removing it. I grew a bit frustrated, but knowing this was a volunteer project, decided it was time to do something about it, and so I started making some calls. The pump track could be a lot more fun, but it needed a lot more dirt. 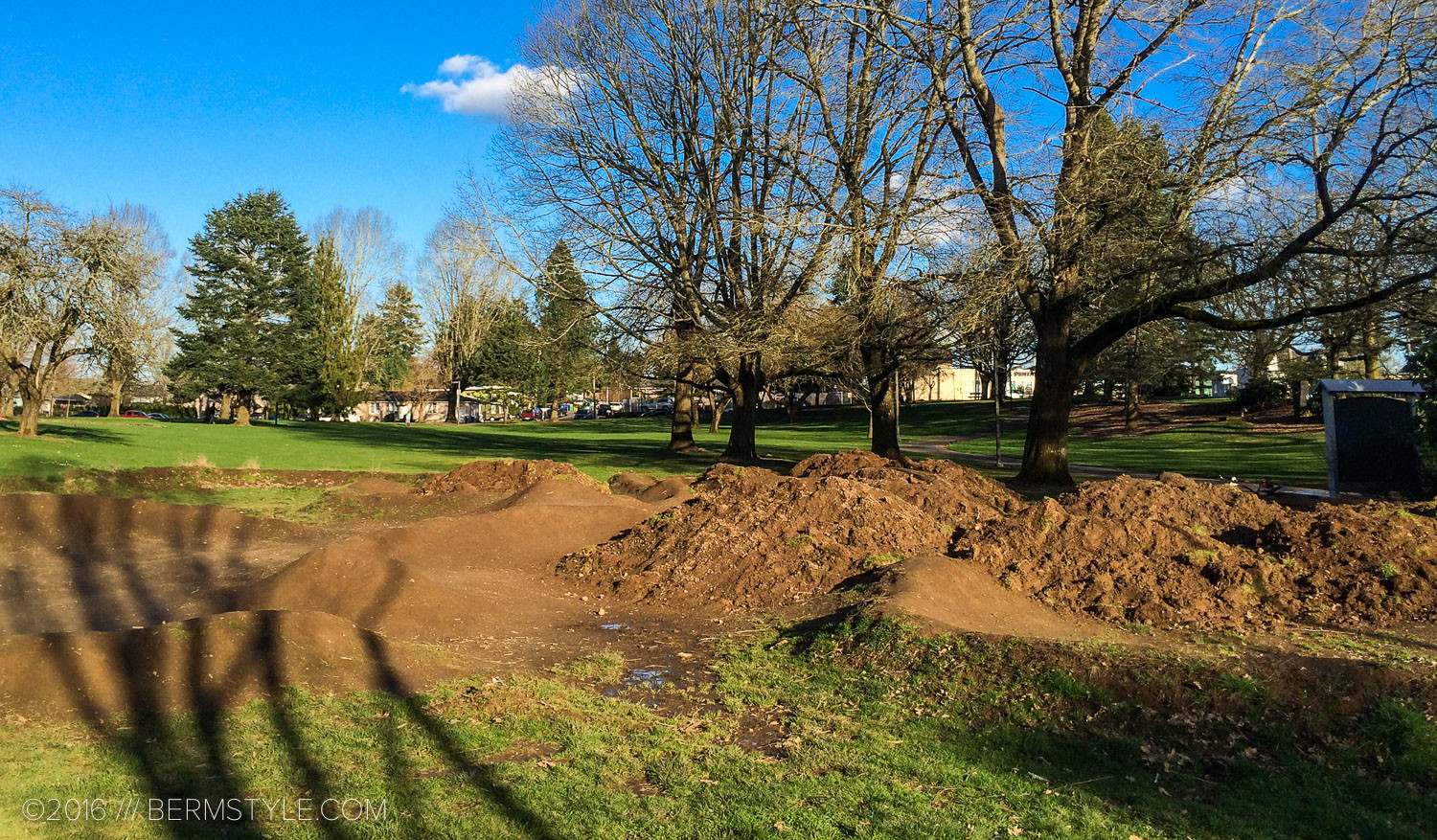 Here’s where we started, with stacks of new fill soil imported from another park. Parks needed a place to put the soil, and we needed it- talk about perfect timing. 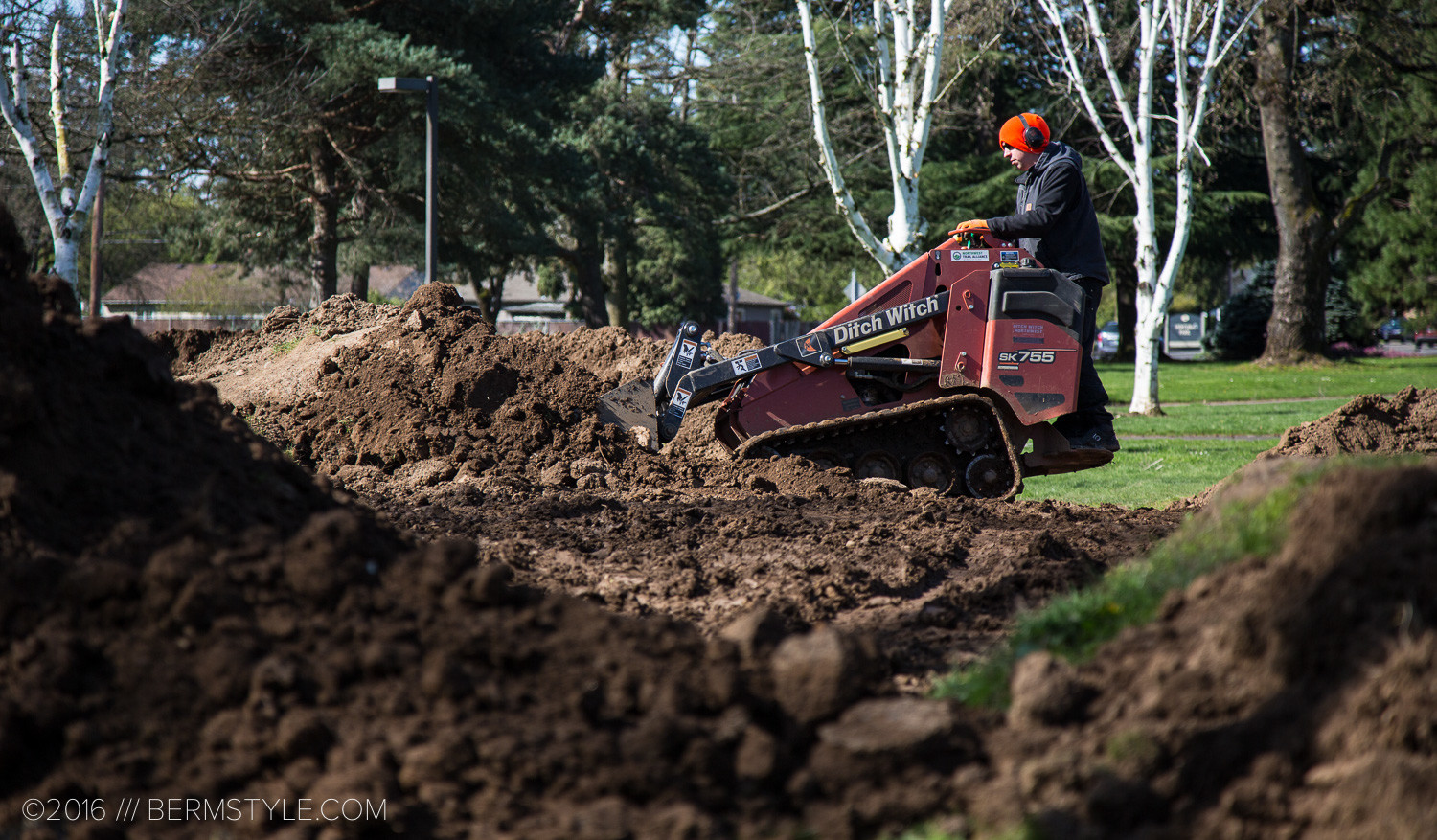 At the start of the day, early Saturday morning.

Improving the riding experience of the pump track would take some time and effort, but I knew it could be done. After reaching out to Tom Archer, the former president of the Northwest Trail Alliance, I connected with the maintenance supervisor at Portland Parks, and on behalf of the Northwest Trail Alliance, I was able to secure three truckloads of fill soil from another park site about a mile away. Meeting him at the site, I inspected the soil, gave the thumbs up. During the next break in the rain, the city put a work order in and moved the soil onsite. Then it was time to coordinate the machine we’d need to move the soil. 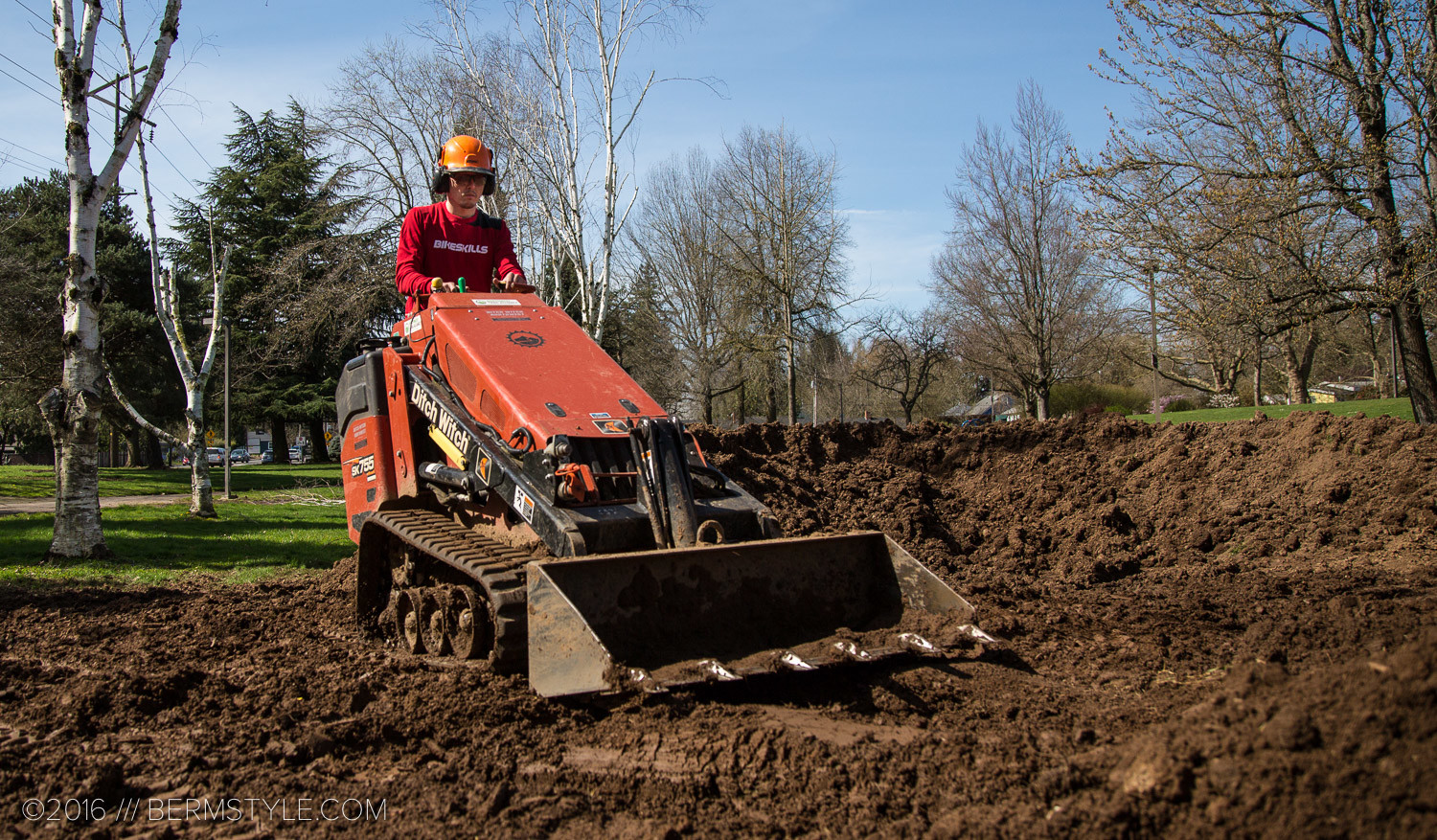 Cole is a much more proficient operator, so he handled most of the stick time while I oversaw placement, taking shifts when he needed breaks.

The weather hasn’t been with us though. In order to coordinate the day to get the work done, and figure out how to get the NWTA Ditchwitch onsite, we needed to time it with a break in the weather as well as the availability of the ditch witch.

Mike and Will at the Lumberyard Bike Park came through with a secure location to store the Ditchwitch. Then the Ditchwitch broke down. Joe Rykowski of the NWTA came through for us though; he went far and beyond, going the extra mile in getting the machine repaired and then transporting it for our use on the project.

Last Saturday, the pieces finally came into place and we had the Ditchwitch on site and a break in the weather. 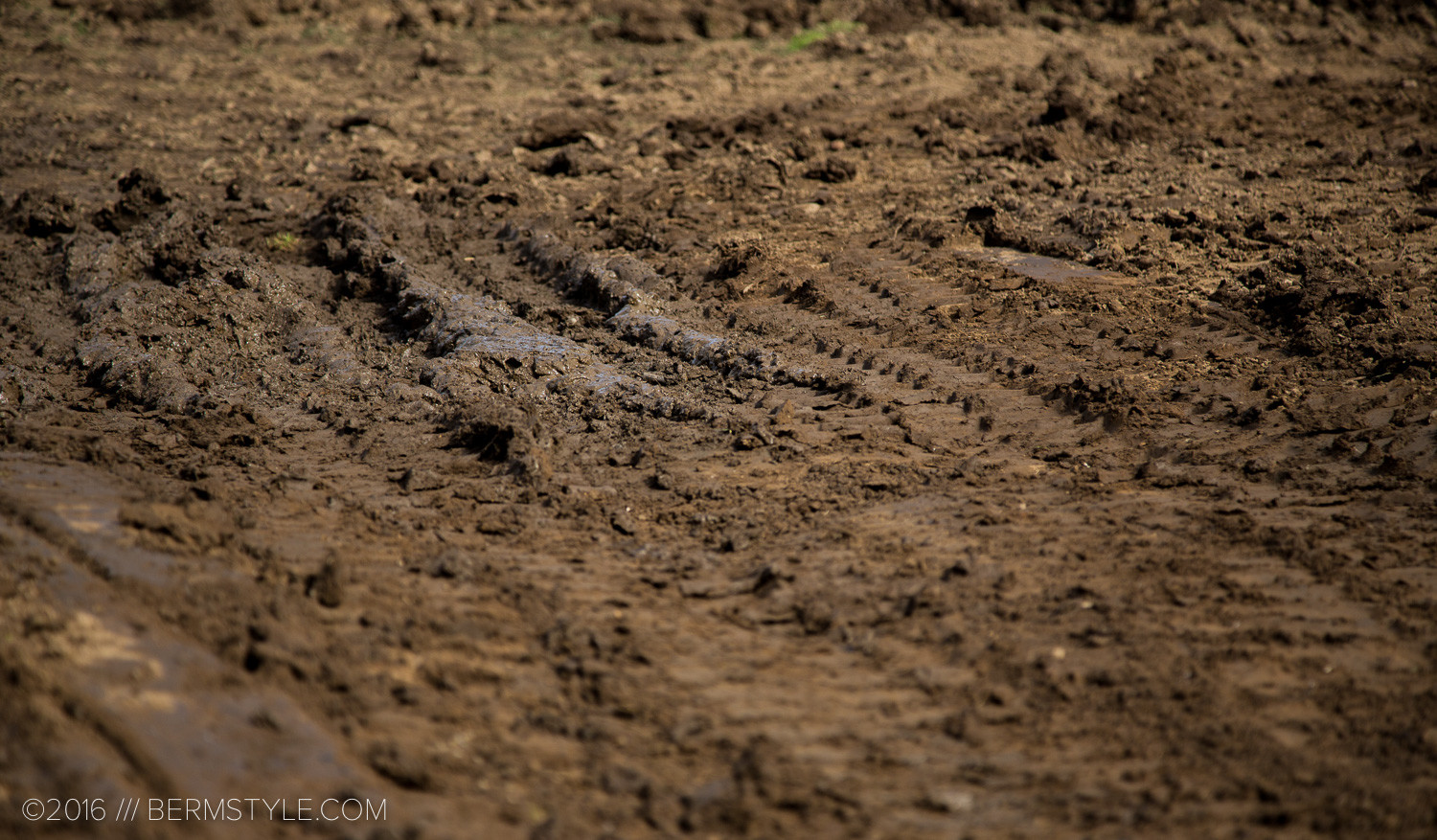 There isn’t much we can do about this due to the location, but hopefully when our work is complete, the track will be rideable more often, and provide more fun for riders of all ages and skill levels.

The forecast only had one day without rain, so we had to make the most of it. Cole is an early riser, so we met on site at 7am to get started. After getting the machine up and running and going over the game plan, Cole got to it, while I went to fetch pin flags and coffee.

Cole Pruitt has impressive skills as a machine operator; when I had returned, I came back to this: 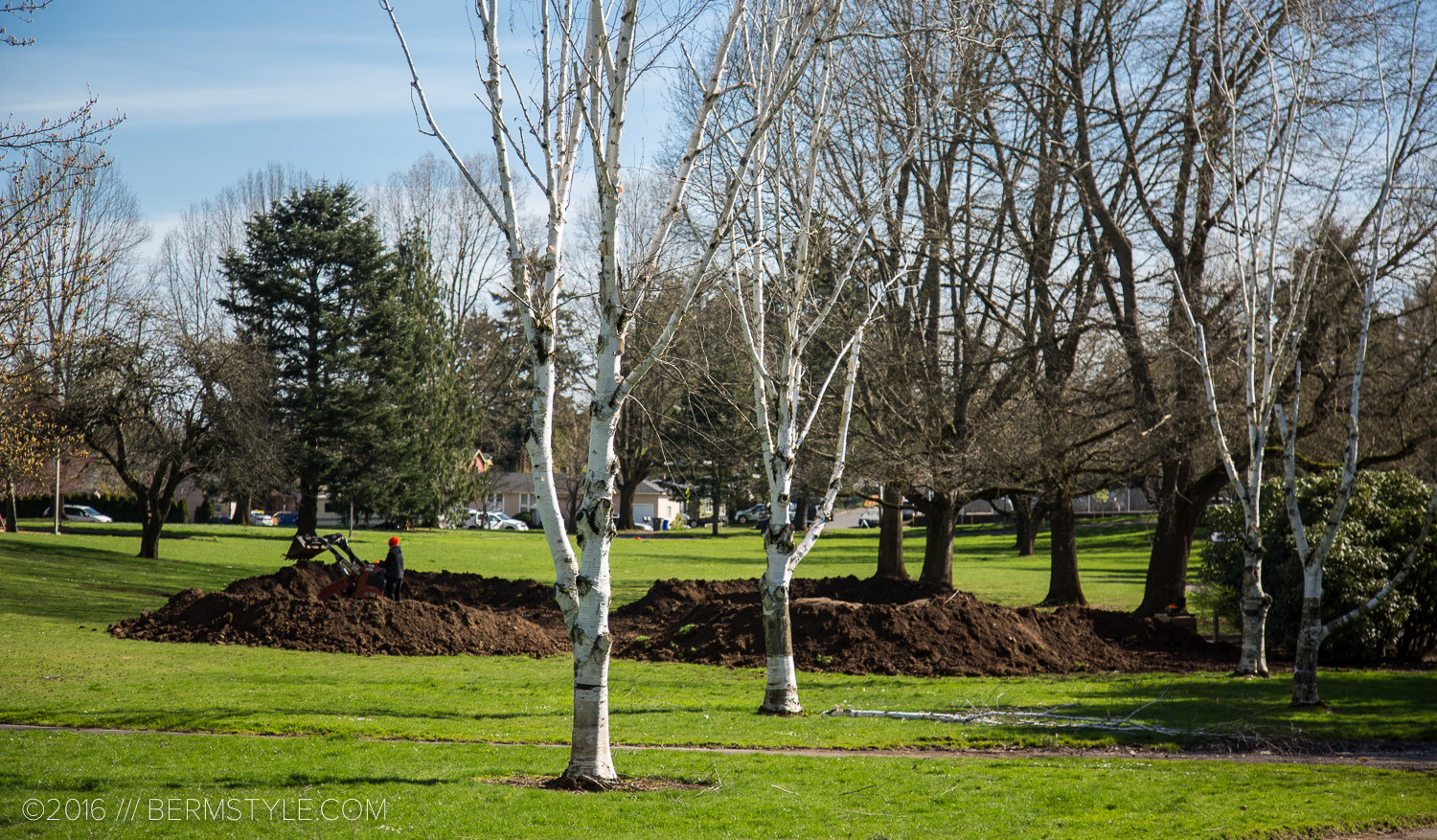 We have achieved legitimate berm status. 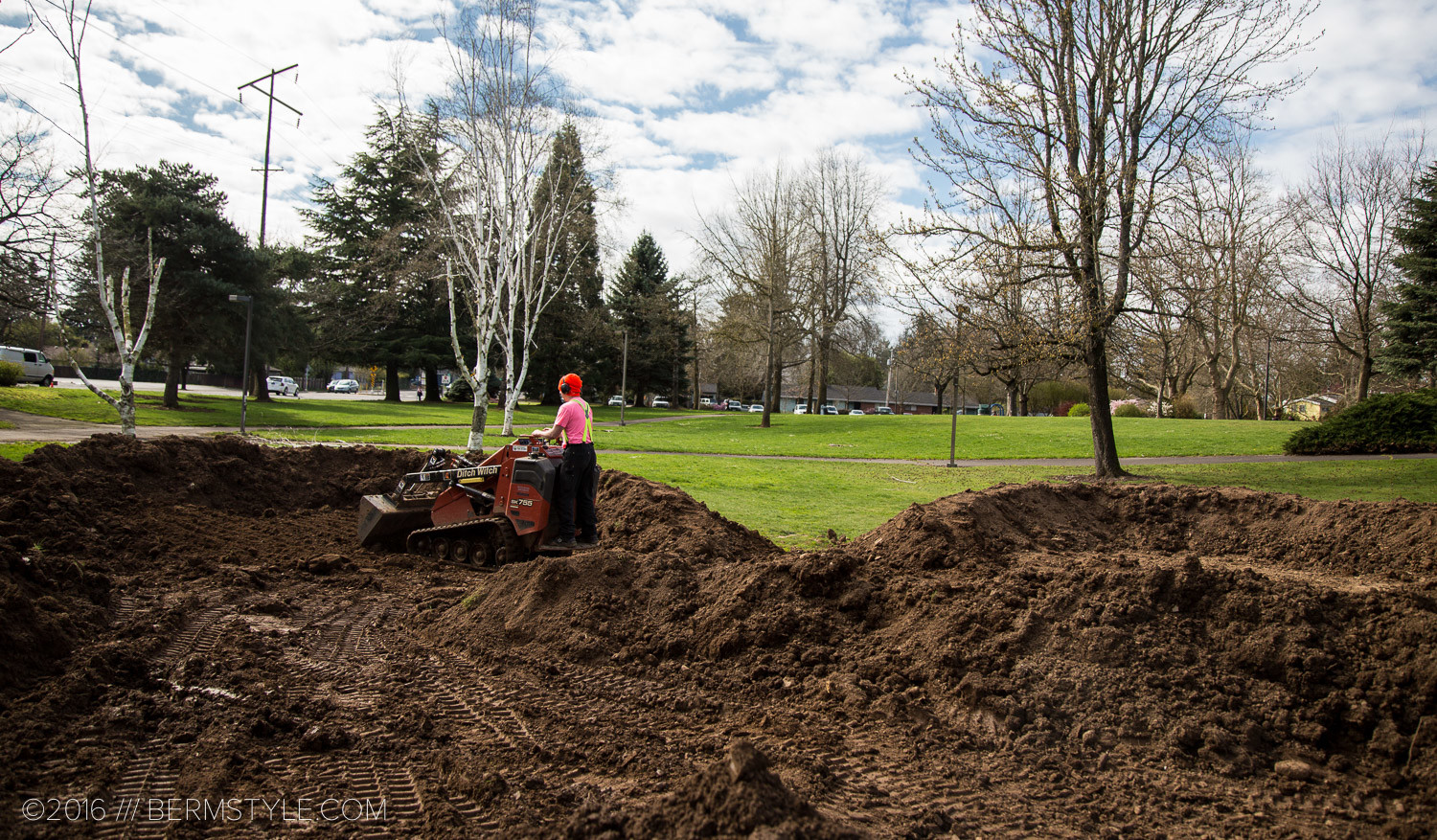 This berm used to house a large pool of water. A lot of our soil went into filling it in.

We’re hoping to have the pump track finished in the next few weeks, provided the weather cooperates and we have enough man power to stay on track. The Ditchwitch is currently back on site on the west side, so we’re going to tackle the rest of the project with good old fashioned hand tools.

We’ll be posting updates on our Facebook page — if you don’t already like us there, here’s the link: www.Facebook.com/Bermstyle

The Ventura Pump Track is project of the Northwest Trail Alliance in partnership with Portland Parks & Recreation.