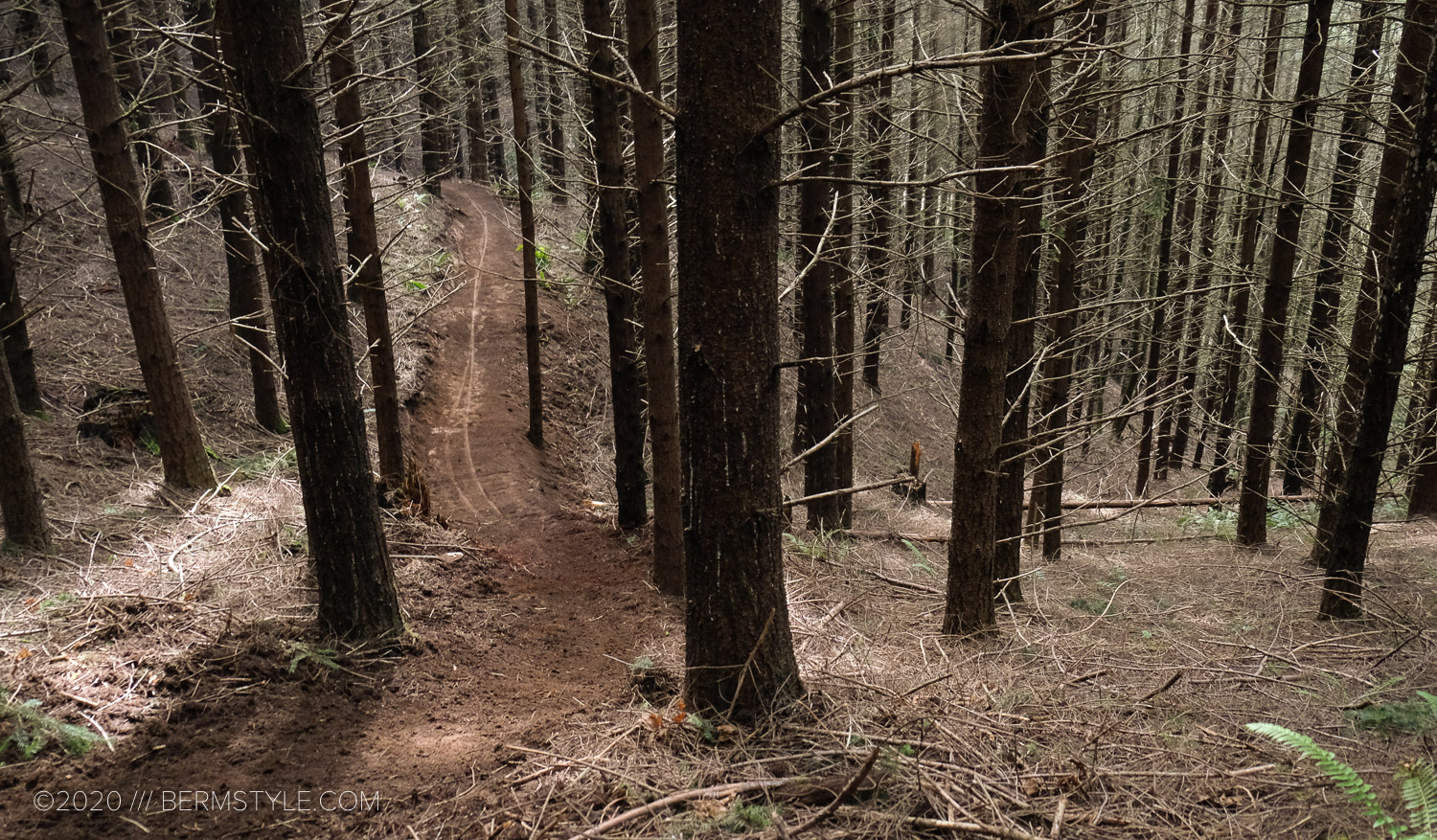 Fresh tracks after a workday at the Rocky Point Trails, northwest of Portland, Oregon.

As a mountain biker living in Portland, one of the most exciting developments in the last few seasons is centered on the trail building activity near Scappoose, Oregon. Now known in mountain biking circles as the Rocky Point Recreation area, this area is located on private timberland and made available for mountain biking through a recreation-based lease to local mountain bike advocacy organization the Northwest Trail Alliance (NWTA). 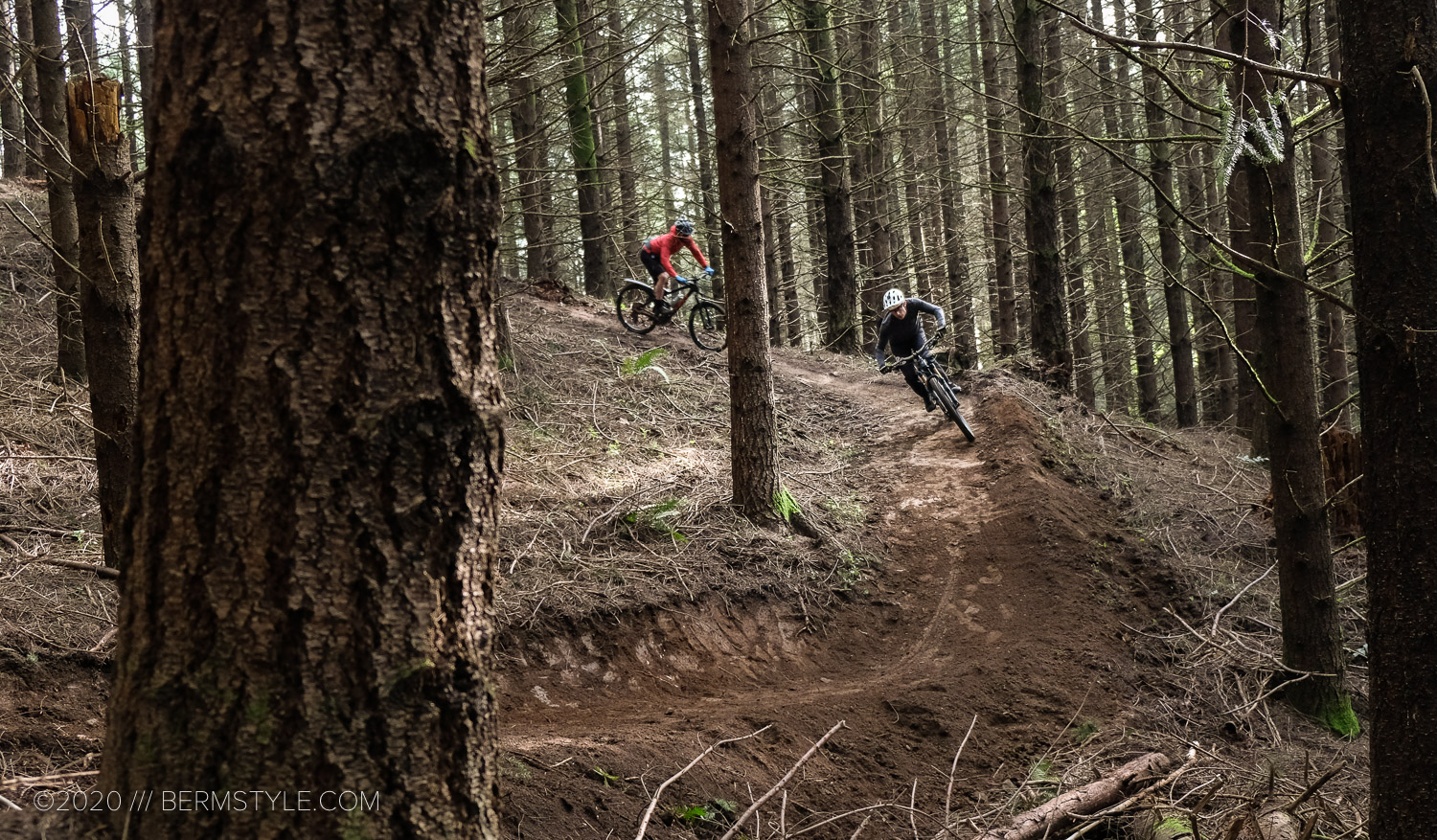 Trail builders testing the fruits of their labor.

Many of the trails in the area have been used by local riders for years, but logging removed a large portion of the routes. Then the trails were closed and access to the area became a gray area; limited to the few approved for a special use pass to access the area.

While many of the trails continued to be utilized and there was trail building activity, users not on an exclusive lease were technically trespassing. 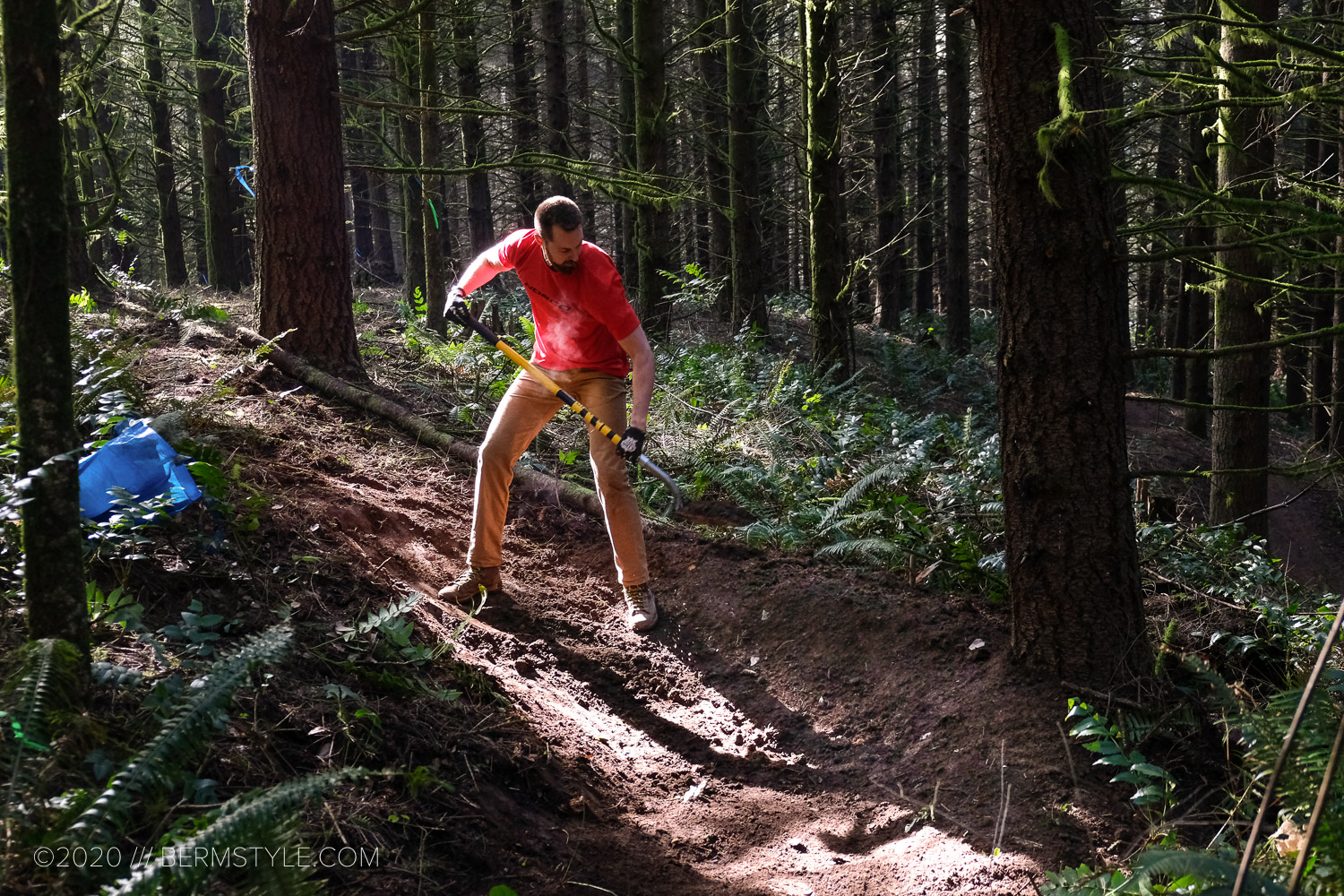 In the fall of 2019, the NWTA announced a groundbreaking partnership that would provide mountain biking recreation in the area for registered members. Through an agreement with the Weyerhaeuser Company, NWTA members in good standing have access to this growing network of trails. The land-use agreement is one of the biggest accomplishments in recent years for the club. Considering the sparse options for urban mountain biking in Portland, a significant investment is being made in the area, with volunteer trail builders donating thousands of volunteer hours into the emerging trail system. 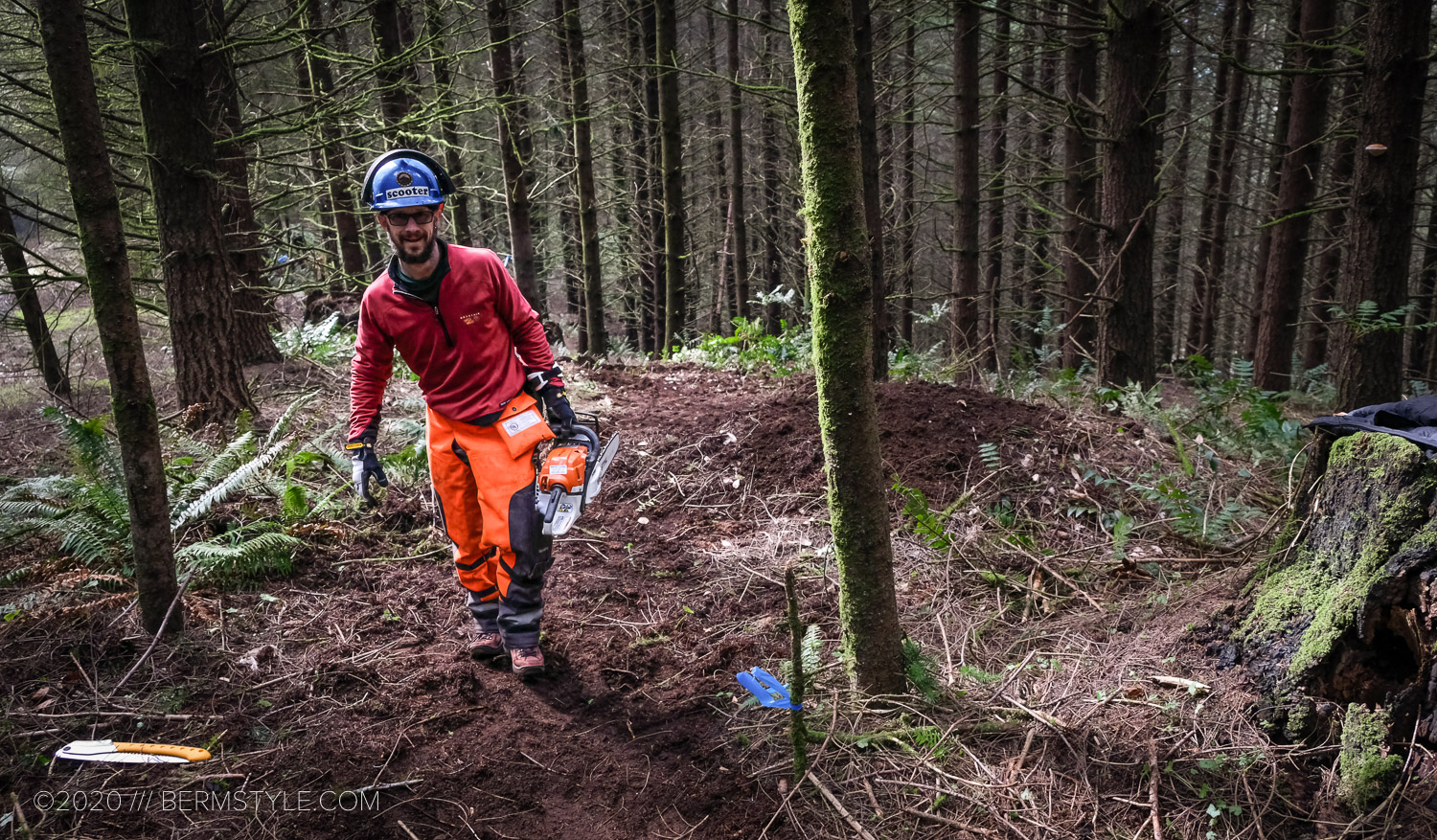 Local rider Scooter Sutterer stepped up as lead for the Local Stewardship Team at the Rocky Point Trail System and has donated hundreds of volunteer hours on the project.

Portland, Oregon doesn’t have much in the way of mountain biking. Although the city houses the 7th largest urban park in the US, (Forest Park) cycling usage is restricted to natural surface roads, effectively banning mountain biking. That makes Rocky Point the closest legitimate mountain biking experience to Portland. Located 20 miles northwest of the city, mountain bikers on the west side will be able to squeeze an afterwork ride in.

For comparison, Lacamas Park in Camus is 24.7 miles NE of PDX;  and while you could argue Powell Butte is the closest at 10.9 miles, in recent years the park trails have become less friendly to mountain bikers, with the number of available single track miles dramatically reduced. Although we’ve ridden at Powell Butte for years, we tend to avoid it due to the growing user conflicts there. 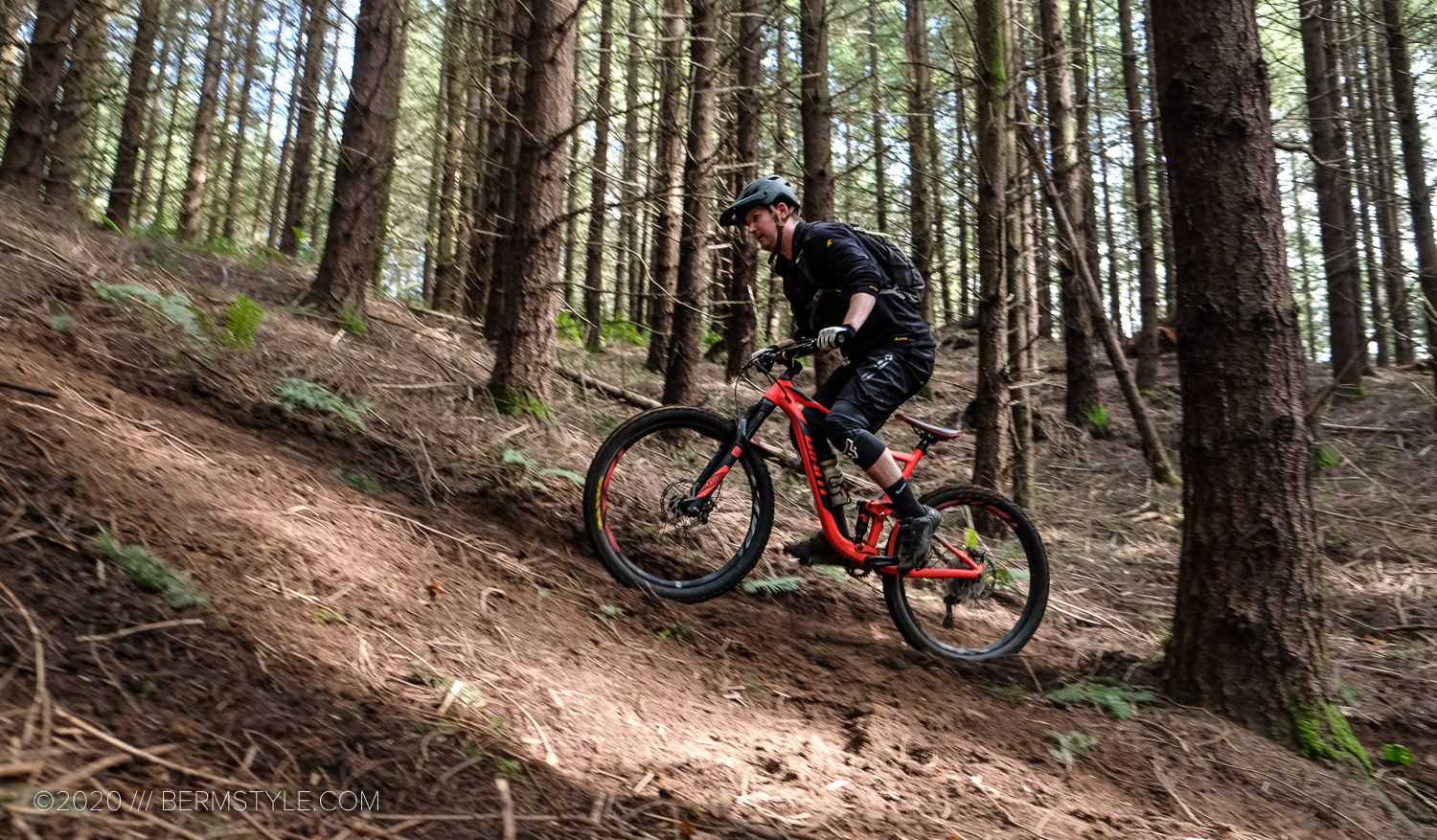 Dig it, Ride it

The best part of donating time swinging a shovel is riding fresh tracks directly afterwards. (provided you’re not already wiped out from a morning of swinging tools)

The trail experience at Rocky Point has already undergone a significant upgrade in the riding experience as connectivity between the North and South sides have been improved by a connector trail. And while the south side has generally been a personal favorite, it hasn’t always been very friendly towards less experienced riders.

One of the recent updates is a number of new Blue Square/ Intermediate rated routes that have been added to the mix. In addition, some of the routes we used to only shuttle now feature climbing trails, providing more options for planning a ride. 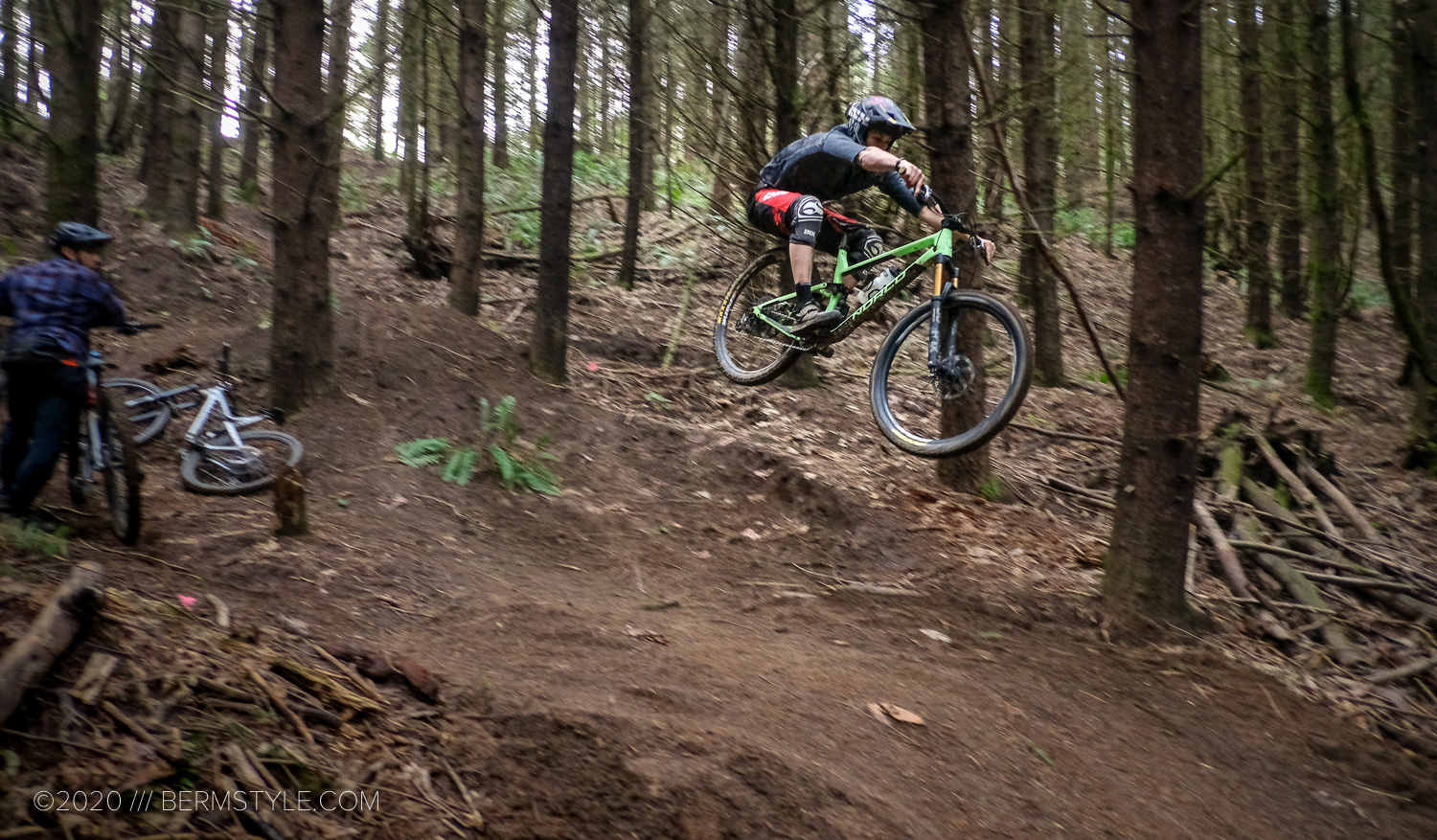 The “old school” XC-style trails are slowly being improved as well. One of the biggest issues with the heritage trails has been lack of consistancy; a trail can go from a mile of rolling contour and then abruptly take you up a 20% grade, straight up a hill for no apparent reason.

A master plan is being put together now that should go a long way towards improving the network and the riding experiences. 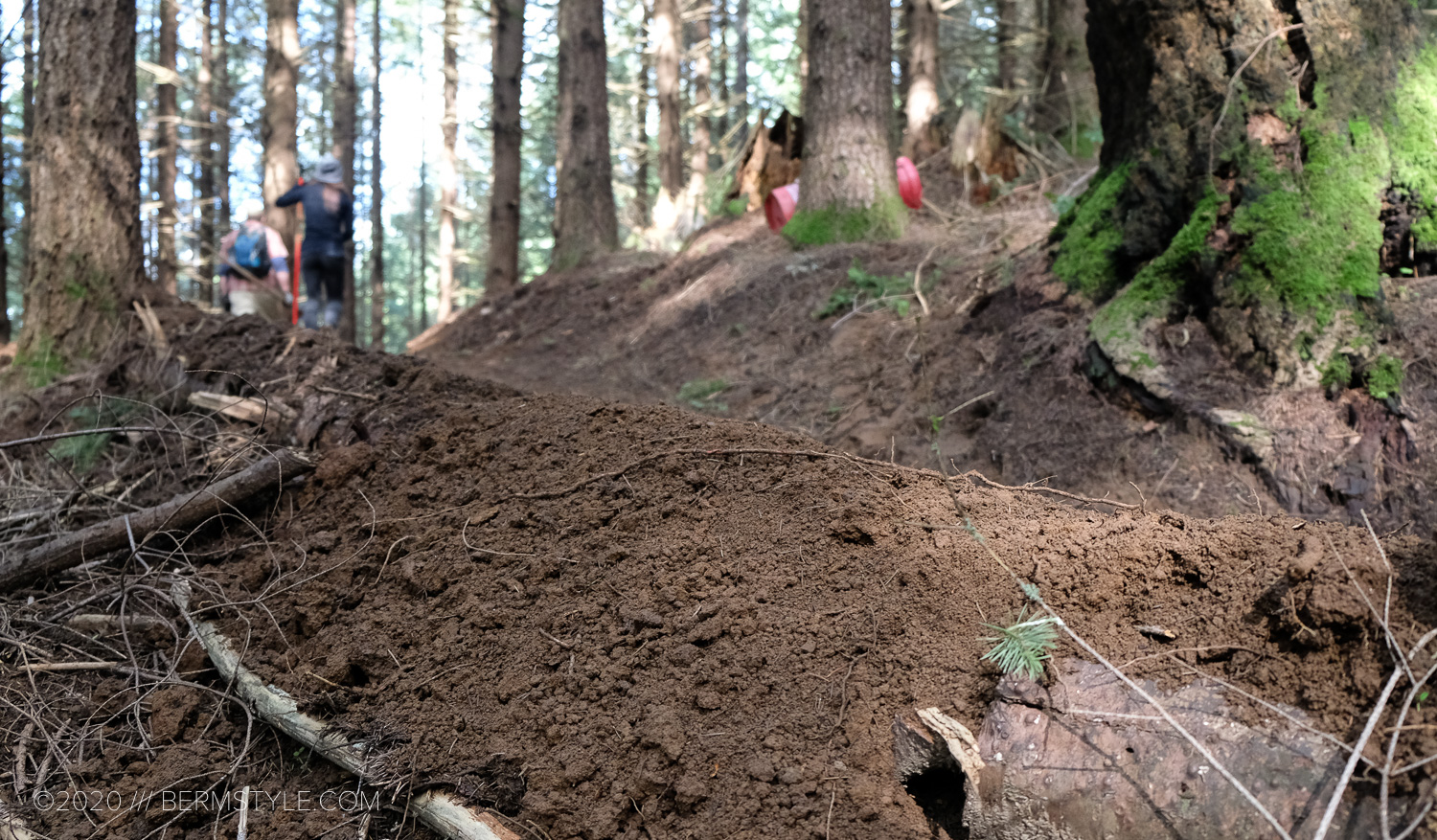 Ongoing build days are happening regularly, so if you’re a Portland resident and want to check out this area, we recommend coming out for one. It’s the best way to network and meet new riders. Just remember to save a bit of energy so you can get on the trail and learn some of the route afterwards.

We also recommend joining the Northwest Trail Alliance. Dues-paying members officially receive access to the area after signing the online waiver, and it is an easy way to support the on-going efforts, even if you can’t donate personal time.

(via the NW-Trail.org) The main entrance point for the trails is currently on Rocky Point road. Enter these GPS coordinates in Google Maps ( 45.696252, -122.882228 ). There is some room to park along the road near this entrance. You can also park on NW Old St Helens HWY and ride up.