The Johnny Royal Trail at Sandy Ridge is finally open, and we’re obsessed with it — OBSESSED I say! Seriously, I can’t stop thinking about it — this trail is legal crack for jump junkies like myself. I am already shopping for a new bike, just for sessioning this trail. (and trails like it)

TLDR: What is Johnny Royale?

Johnny Royal is a one-way progressive, black diamond level park-style jump trail at Sandy Ridge, a BLM managed public trail system. It starts above the bridge where Upper Hide and Seek and Two Turn Tables Converge. It is currently the most progressive flow trail style jump line on BLM managed lands, a title previously held by the Enticer Trail in Redding, California. 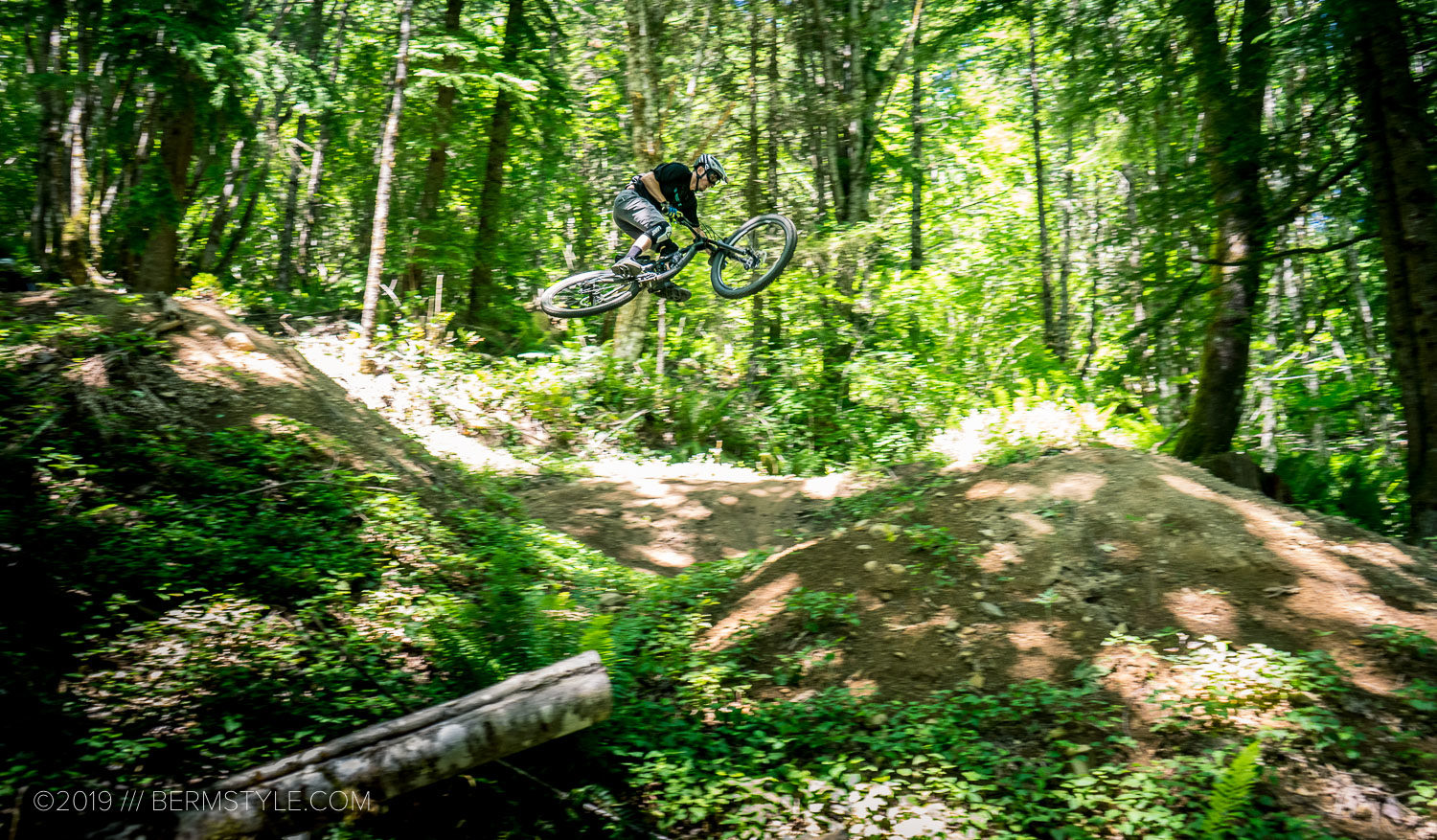 This gap jump looks more intimidating when you’re standing on the lip. It’s the first of three features in a straight that ends with a large step of up.

So here’s the deal. The jumps on this trail are advanced. Not just because their size – in fact, I’d argue, that size has nothing to do with it. It’s the fact that many of the jumps are gap jumps, effectively making Johnny Royale a double black diamond level trail. Also, the landing zones are not terribly forgiving. If you case, it can be harsh.. fortunately the dirt is still somewhat moist. Most of them are shorter in height compared to trails like Crank it Up in Whistler, which is a blue level trail. However, the high penalty for error on the landings here could put a rider out of commission.

That said, I’m so freaking stoked on this trail. Before Johnny Royale, the closest and most similar experiences close by were the jump lines at Post Canyon and Black Rock. And after spending a full weekend working my way through and dialing in the trail, I’ve been thinking about it constantly. Sunday was the official opening day and I spent all afternoon riding Johnny on repeat, doing full laps of the trail.  The smart way to approach Johnny Royale is to break it down into sections, and master it a piece at a time, then putting it all together. Not feeling it yet? Then hit those brakes and roll the section, and survive to ride again another day.

By the last lap of the official opening, I had successfully jumped the entire line, save the large step up at the top – you have to save something for last, right? 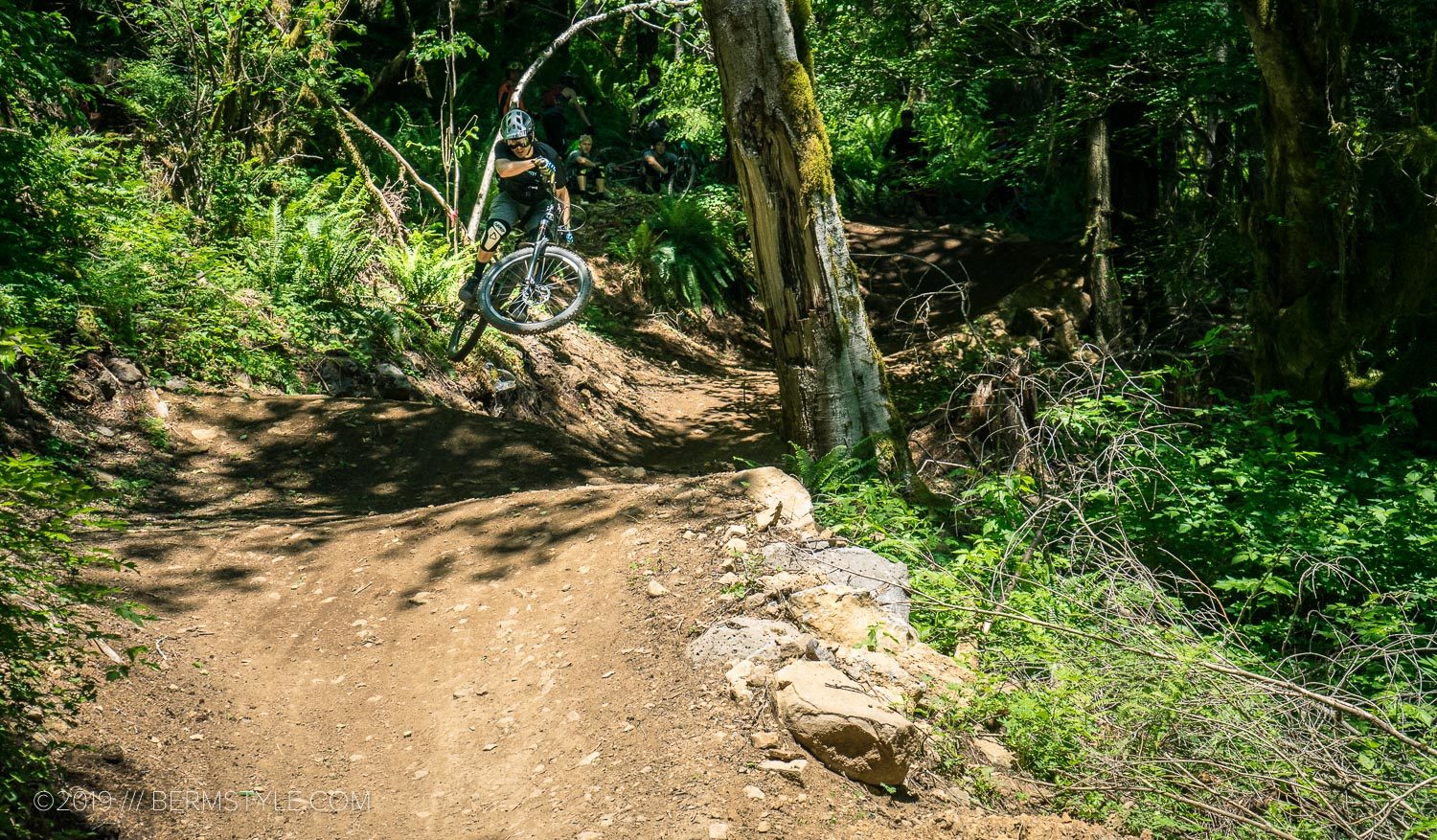 Assuming you are already comfortable with dirt jumping and bike park trails, the best way to learn the trail is to break it down into bite size pieces/ segments, riding with a friend or two of a similar level or better so you can let someone else be the guinea pig. If you’re not, I recommend getting dialed on the jumps on Rock Drop, Quid Pro Flow first, as well as the jumps on Thrillium at Cold Creek and Extended Play at Post Canyon.

We’re fortunate to have quite a few jump line style flow trails where riders can safely progress and build confidence, and I would recommend practicing your skills on the following local area trails first:

The majority of the riders we saw on the trail Sunday were rolling down at a moderate pace, checking everything out. The speed and size of the jumps is reminiscent of park style trails like A-Line at the Whistler Bike Park. 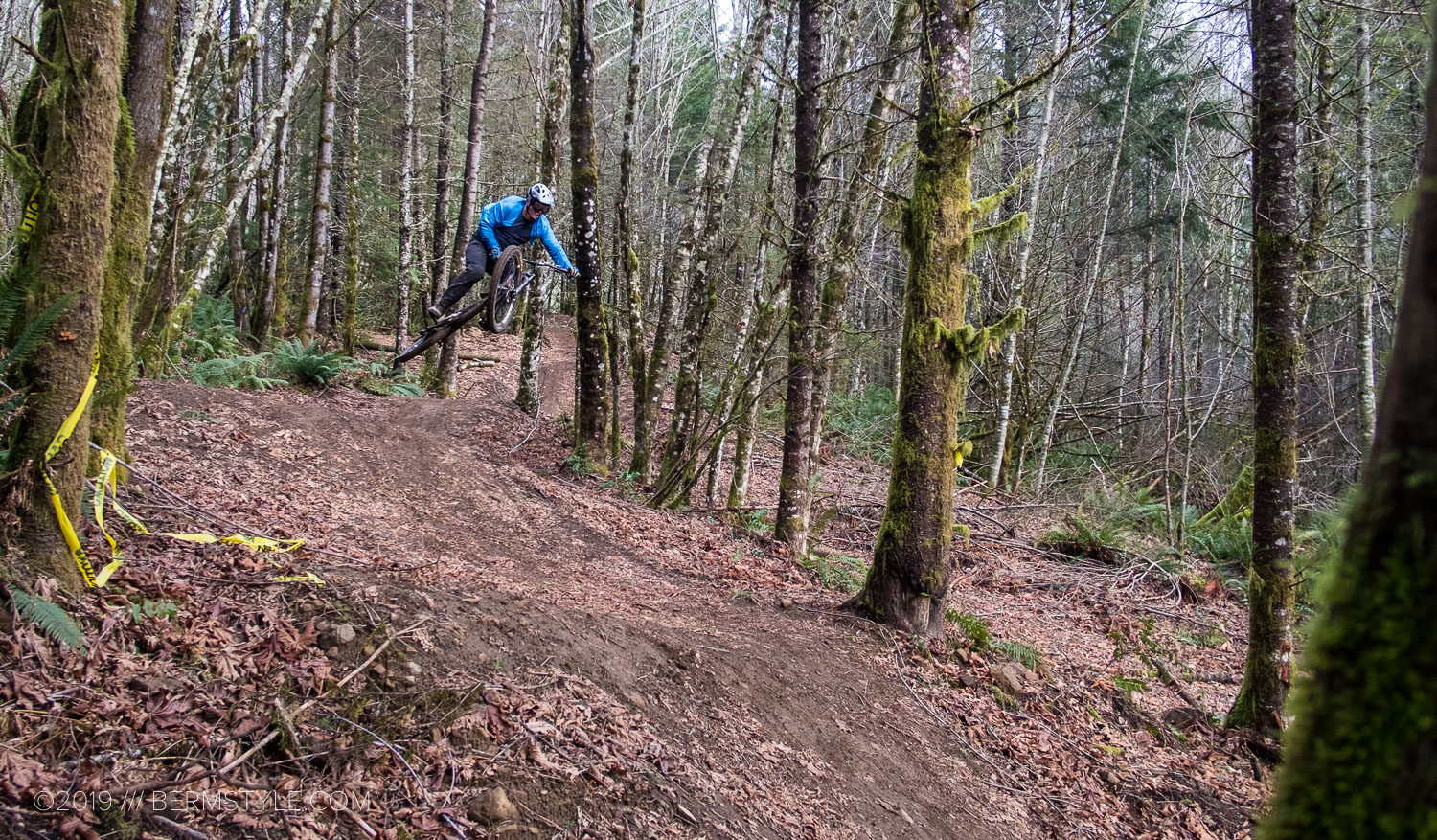 What’s the best bike for the trail?

Most riders we saw that are successfully hitting the lines were on enduro caliber bikes, though a shorter travel slopestyle class bike would work well under the right rider. You really need to carry momentum on the trail to clear all the jumps, which means minimal braking for much of it. Everyone we’ve ridden with has over jumped and under jumped their share, and all that travel really helped keep the rubber on the ground. While I was working my way up, I bottomed out my rear suspension a number of times, as I was holding back. Once I stayed off the brakes and committed to the send, I was clearing everything. 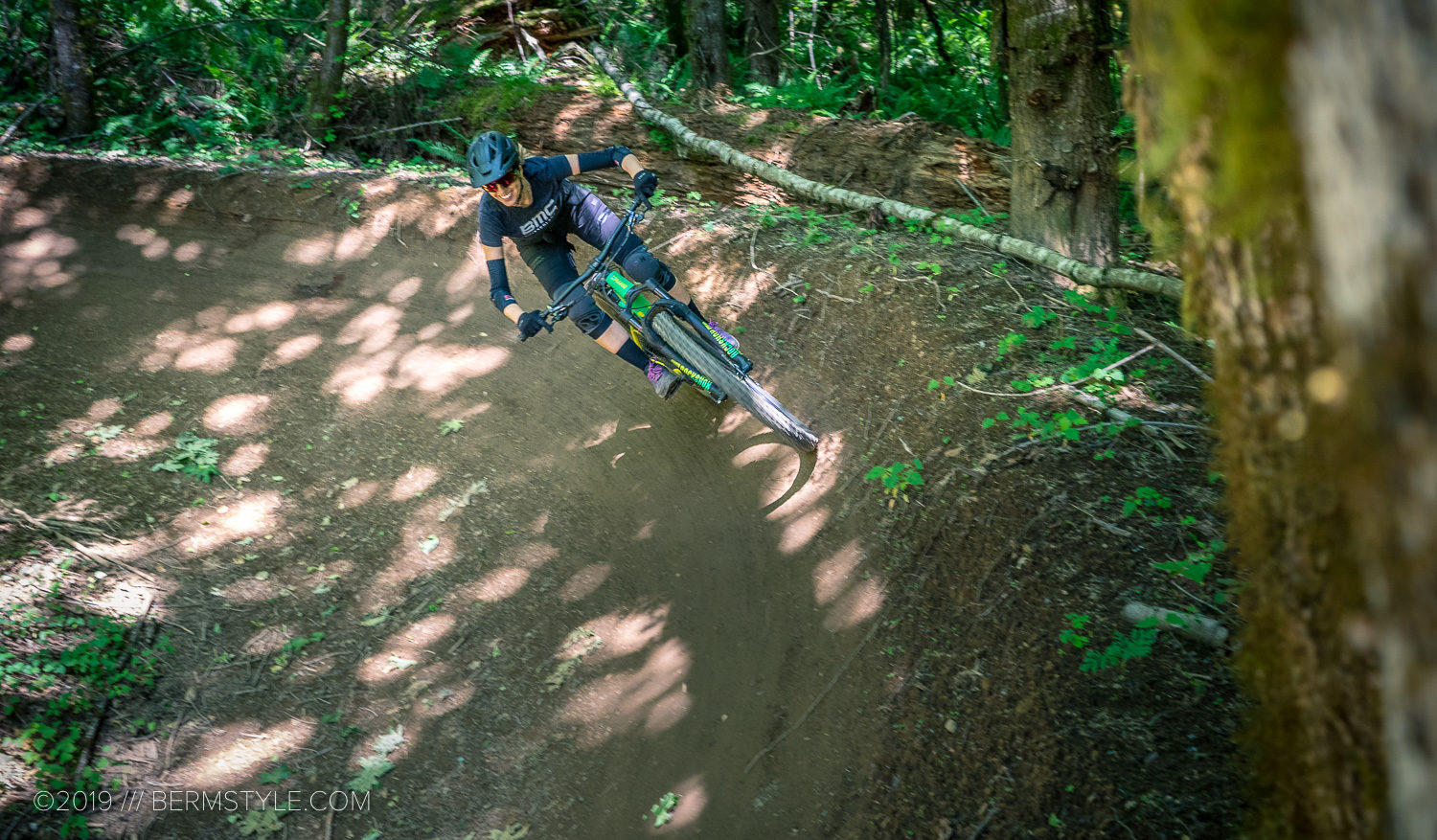 Can anyone ride it?

We do not recommend this as a trail for all riders, but for more experienced riders only. Although I’ve rocked all of the updated Dirt Merchant, and most of the monster Crabapple Hits line at Whistler, I still took my time getting to know Johnny Royale. While almost all the features are rollable, it is an advanced level trail. (If you’ve ridden the Blue Line at the Lumberyard or can jump all the jumps on Quid Pro Flow you may be ready to begin to learn the trail).

That said, Inga had a blast riding the trail, as current traffic on the trail is light, and who doesn’t love massive berms, flow and pumping big ‘ol rollers? If you’re learning/ getting to know the trail though, be aware: in order to successfully negotiate the jumps on the trail, high speeds and commitment to your actions is mandatory. And though sight lines on the trail are good, loitering in the middle of the line could be disastrous — for both the rider and the person blocking the trail. (if you caused someone to crash by standing in the middle of the trail there also is the possibility that you could face financial liability – we do live in a litigious country)

There isn’t yet signage or an adequate skills filter at the beginning of the trail, so be hyperaware that if you’re checking it out and stopped that you should give plenty of leeway to riders descending.

The jumps are sizable and riders working their way down the trail require a high degree of concentration. 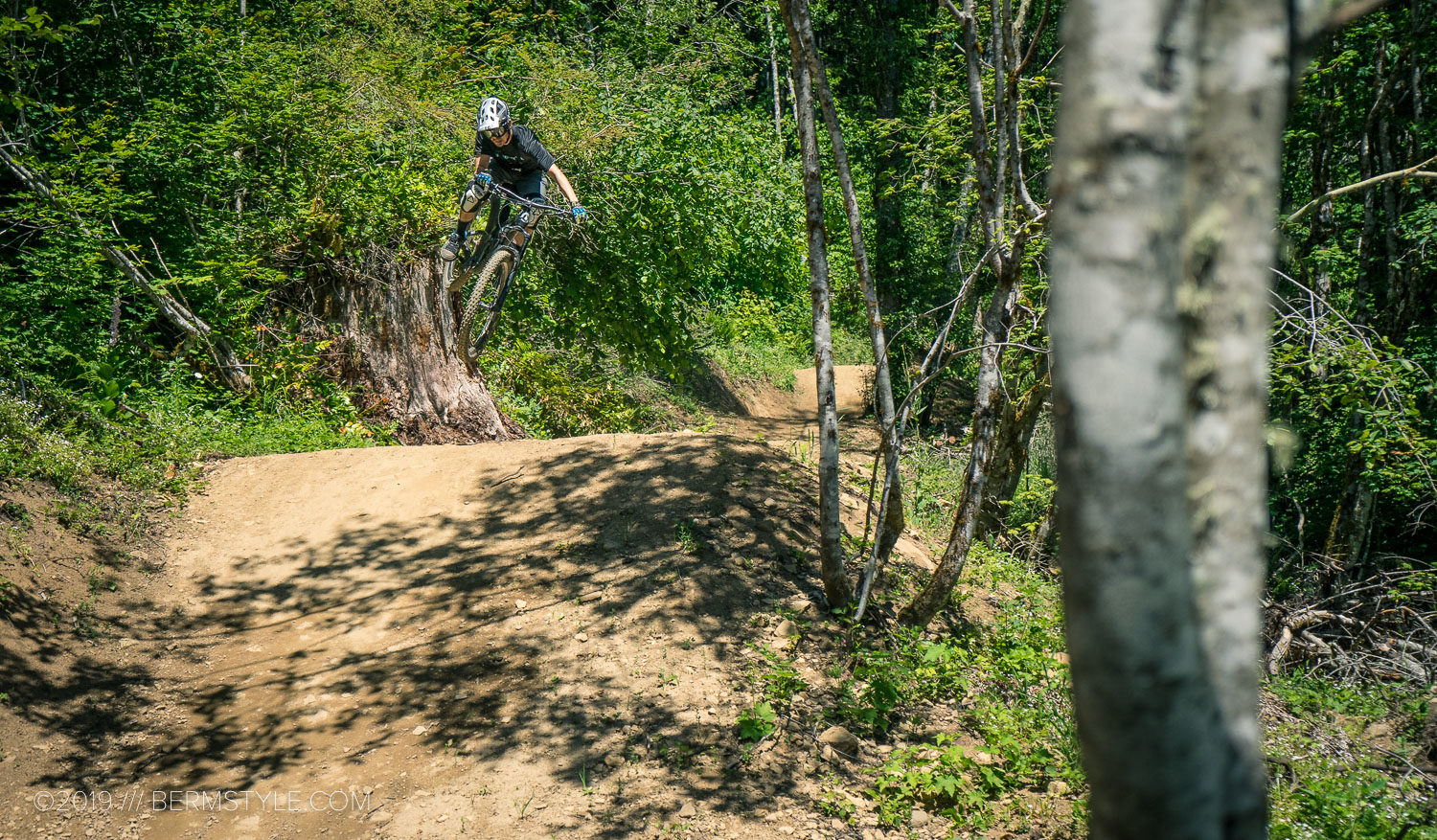 Why did it open so late?

That’s a great question, as construction on the trail has been done for some time. There were a number of reasons, but most center on concern about rider safety, maintenance, and trail management. A number of riders including myself are currently in discussions on how we can adopt the trail to maintain the existing user experience.

What are the plans for maintenance?

Jumps with actual bike park style lips require more maintenance than a typical flow track. Dirt jump lips require more technique to maintain their shape, and without a water supply, maintenance will be dependent on available moisture. After hiking the trail this weekend, we observed a significant amount of soil on the tops of berms that still needed proper compaction. We have concerns that if that doesn’t happen, one rider error could take out about 12 inches of berm, changing the trail until the wet season. More on this soon.