We finally received a taste of Colorado single track last week when we rode the Hall Ranch Trails. Once we had picked up our Subaru supplied IMBA car and our new Fisher Roscoe trail bikes, (and customized them with some key spec changes for getting rad), we were anxious to get them out on a shake down ride. The Roscoe is billed as a trail bike, and features the Trek ABT Suspension Design, with about 5.5″ inches of travel in both front and rear. Once we put the short stem, Race Face DH bars, and flat pedals on, we felt a lot more at home. 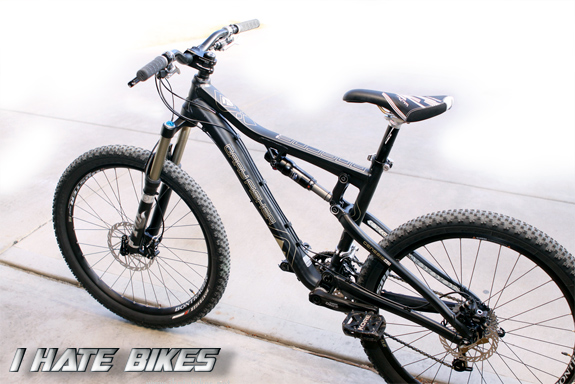 The best part was that my buddy Jon C and his roommate Evan were coming up to Boulder to meet us. Jon is a good friend from the university days, and It’s always a treat to get a ride in with him, as he’s always a busy guy once the riding season kicks in.

Jon has an awesome job. He’s a product manager for SRAM, and is one of the guys involved in the Black Box program. He makes limited runs of the cool Gucci stuff for the best riders in the world. This of course means Jon rides the best stuff as well.. if you were making cool one off parts for the likes of Sam Hill, wouldn’t you want to put it on your bike and make sure it works? Yep. Me too!

Since it was our first time out on the new rigs, we decided to meet up at the Gun Barrel Jumps in Boulder’s Eaton Park to get warmed up. The guys were driving up from Colorado Springs, and as they took a wrong turn on the way, it worked out perfectly. We had a fun mini session at the jumps that served as a great warm up before heading off to hit the trail. 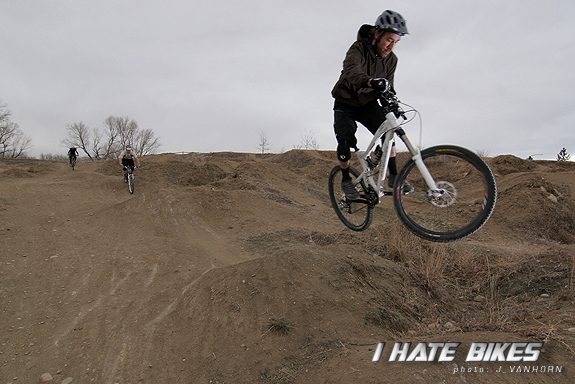 Jon leads Evan and Inga through the warm up line at Eaton Park.

The Hall Ranch Trails are located near Lyons, Colorado. The Bitterbrush Trail can be combined with the Nelson Loop Trail to form a 9.4 mile “lollipop loop”.  Both trails are multi-use trails and see moderate-to-heavy use year round. Our original plan was to park at the top of Hall Ranch and ride it downhill. We were then going to use the new IMBA constructed Picture Rock Trail to connect it to the Heil Ranch Trails, making our day sort of a Super-D style Epic. Unfortunately, lack of local trail knowledge shut this plan down, and the maps and sites we referenced weren’t clear enough to decide the top drop off point. As we were burning day light, we ended up parking at Hall Ranch and doing the ride as an out and back, (not quite completing the Nelson Loop) starting on the Bitterbrush Trailhead. 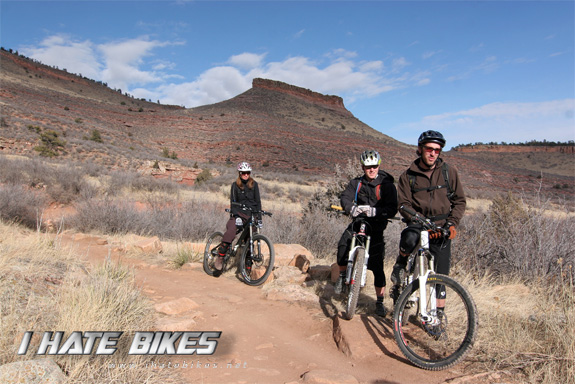 the group takes a rest break while I cough up some blood and snap a few pictures.

We weren’t disappointed. It was a great trail, with two distinctive flavors at both ends. The bottom was fairly chill, just a winding singletrack leading steadily up. We passed a number of younger riders on full-blown DH bikes, which surprised us until we reached a technical rock section. We had to put some work in to get through the stuff, and as Inga and I are both unaccustomed to riding at elevation, we were hurting. 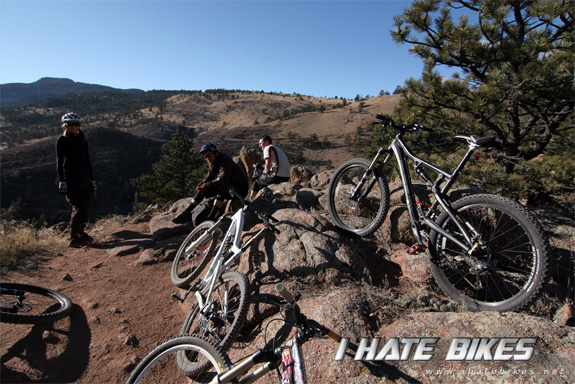 Taking a break and enjoying the view halfway up the rocky climb.

The top half of the trail presented us with a completely different riding experience. Unlike the rocky sections, it was fairly smooth, with bermed corners. Coming back down the trail, it flowed so well that we just kept it wide open and pinned it. The bermed corners were super nice, and until I came to one of the last turns where the trail changed up abruptly, I was railing the new ride all the way down. That is, until the said turn, where I was traveling way too hot, and subsequently shot off line. I managed to run it out between two trees, so it was no harm, no foul. That changed though, when we reached the downhill rock garden section. The rocks we had struggled with on the climb up, were a blast to bang over on the way down. The corners here were not so flowy, and, unused to the steeper head angle and the more trail oriented handling, I lost the front end and laid it down. Fortunately, other than the thumb trigger on my rear shifter, (and my pride) it was all good. Inga didn’t fare quite as well- she wasn’t quite used to the steeper head angle of her bike either and went down in a similar fashion, leaving a nice bruise on her thigh where the handlebar struck. 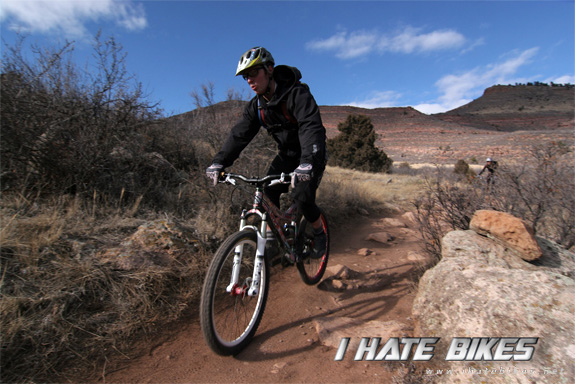 It was a great ride, and definitely worth hitting up if you are passing through the area. Our 5.5″ travel Roscoe trail bikes worked well on the ride, but if you like to ride bikes the way we do, a solidly built 6″ travel all mountain machine would provide the most fun to weight ratio- especially if you like to pin it, and hold it wide open on the burly rock sections. 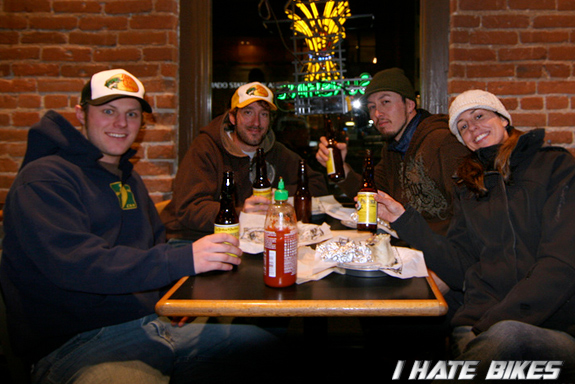 the ride was followed up by the traditional beer and burrito.