Seattle’s I-5 Colonnade Freeride Mountain Bike Park is nothing short of revolutionary in the fight to gain more urban mountain bike facilities. Located under a stretch of the I-5 freeway just a few exits from downtown, the park is a maze of visual wonderment.

What the local bike club has achieved is just incredible. They were able to take 2 acres of unused urban space and covert it into a destination for mountain bikers, a mecca really, of dry ridable stunts, in an area that was once filled with shady characters that included vagrants and drug users. 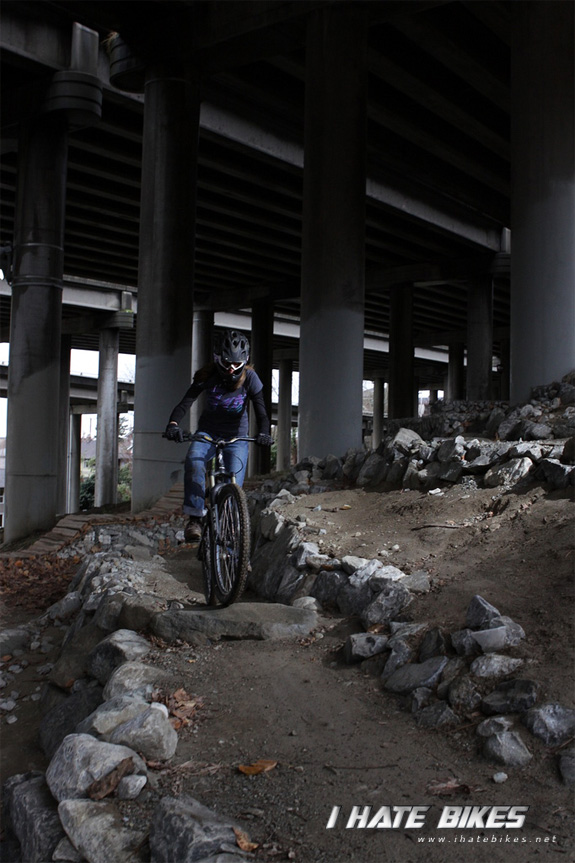 We were blown away by the view.

Because the freeway overhead is so large, most of the space underneath is sheltered from the elements. In a region known for its wind and rain, one is actually able to ride year-round. If that isn’t exciting to the residents of a city that is known to be dreary during the winter months, I don’t know what is.

Imagine what it would be like if every city utilized these undesirable spaces this way- there would be a million places to ride! What the BBTC (now the Evergreen Mountain Bike Alliance) has accomplished, has already inspired dozens of other urban bike clubs. What bothered me though, was a lack of documentation on the park, as well as what has been going on underneath the freeways up in Seattle. I wanted to see pictures!

When we finally began our trip north, visiting this park was a major priority.

Unfortunately, as our freeride bikes were already in storage in preparation for our trip to Boulder, we have been traveling with our single-speed dirt jump hardtails. This was a bit of a bummer, as both bikes currently lack a front brake. This park was certainly ridable with a minimal amount of suspension travel, but unlike many bike parks, this truly was a mountain bike park. I don’t think it would have even been fun on a 20″ BMX. As it was our first visit, and there were a few wet patches, I would have been happiest on a mid-travel slopestyle bike like Specialized’s SX Trail, a Transition Bottlerocket, or any other freeride-oriented full suspension model.  A long travel bike would be a bit overkill. As it was, the lack of a front brake, combined with wet patches, severely limited the fun/ safety factor many of the lines.

When we rolled up to the park, the first thing we realized was the scale of the park. Its MUCH larger than anticipated. We spent a good five minutes just pushing around and taking it all in.

There is quite a bit to choose from. The park offers riders quite a bit of variety with features like skinnies, chutes, ladders, teeter-totters, and drops (in a variety of sizes and flavors).

pedal up the ladder...

There are also two different dirt jump lines, with one ending in a banked wall ride.

The park wasn’t completely rain-free.  There is space between the two freeways above that allows precipitation through. Unfortunately, it lands right on the wall ride.  I imagine when construction of the jump lines began it was a lot more sunny, so that one is chalked up to back luck. However, other than a few wet patches, Seattle riders have a great riding destination when the skys turn dark. 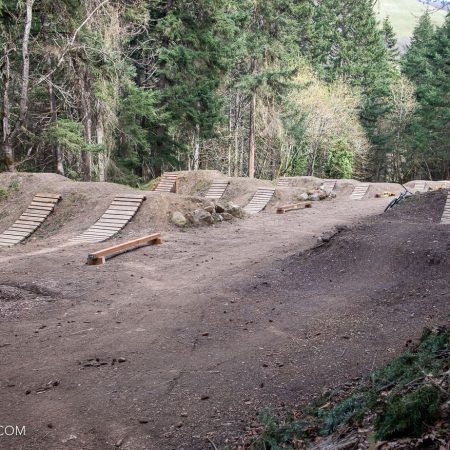