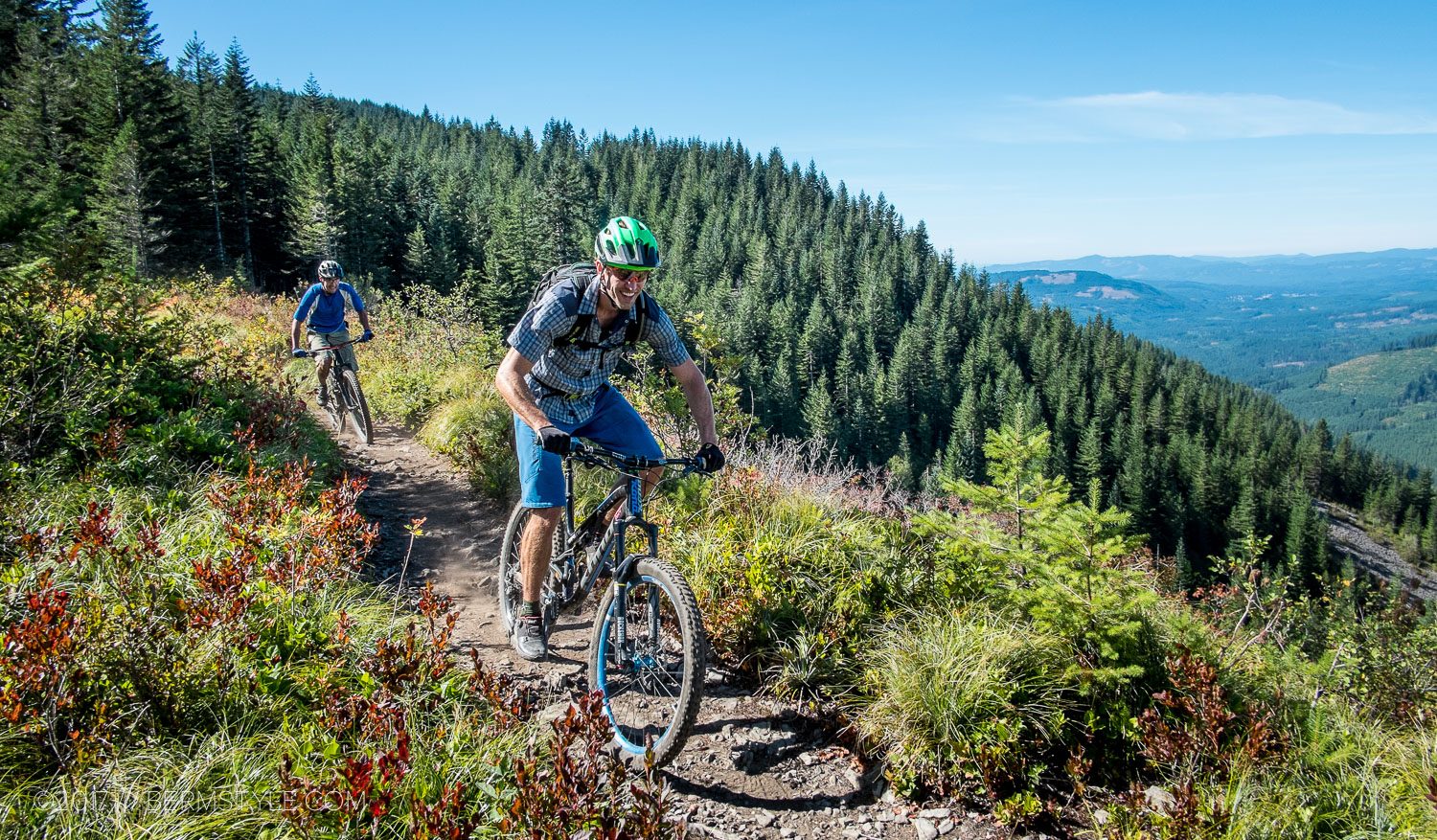 A view from the ridgeline on the Tarbell Trail

The Tarbell Trail Loop at Cold Creek has been on my to-do list for some time now. Located in the Yacolt Burn State Forest in Washington, the lands are managed by the Washington State Department of Natural Resources, aka DNR. Depending on the route, the loop is 20-27 miles in length.

While you’re never too far from an access road, the trail is technically backcountry, and leaving the trail to venture down logging roads can get confusing quickly. For riders seeking a solid day of pedaling up and down mountains with some epic views, it’s hard to beat considering the close proximity to Portland. The route also includes a stop at Hidden Falls; unlike the water falls along the gorge, traffic is relatively light at Cold Creek and we’ve yet to encounter hikers at the falls. 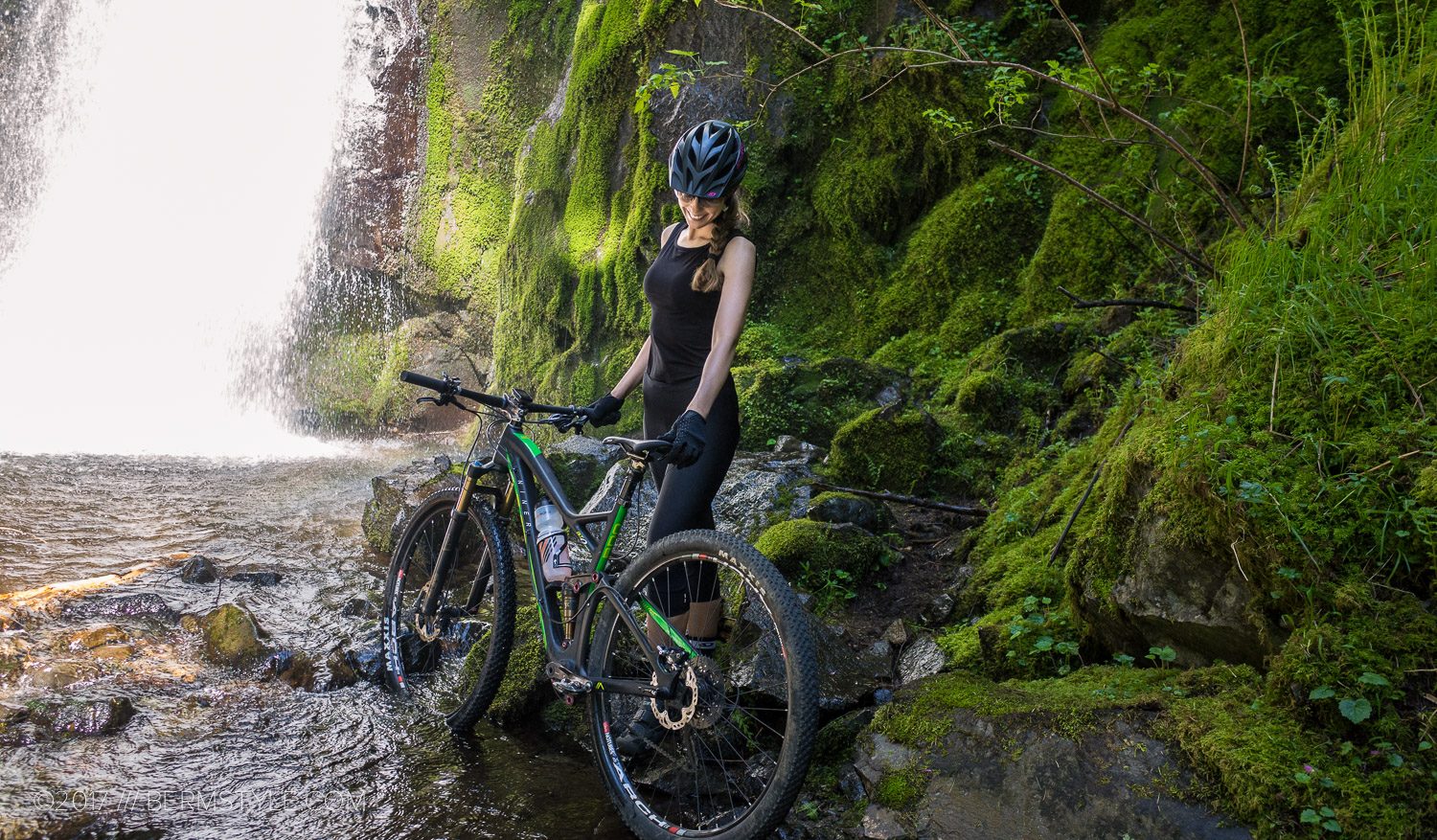 Inga poses at Hidden Falls on a ride last summer.

Cold Creek is best known in the local riding scene for the all mountain/ enduro friendly Cold Creek descent and the downhill trail Trillium. If you’re looking for shorter routes and aren’t willing to tackle the whole loop, climbing up Tarbell to Chinook or Silver Star as an out and back are popular routes; you could also ride to Hidden Falls as an out and back. For pure XC, the Bell Mtn trail out and back is a good one to check off the list as well.

That said, the most popular route is the climb up the fire road to descend Cold Creek. Depending on the direction you ride the loop, the Cold Creek descent is the beginning or end of the ride. For this excursion, we skipped it, taking the fire road instead. 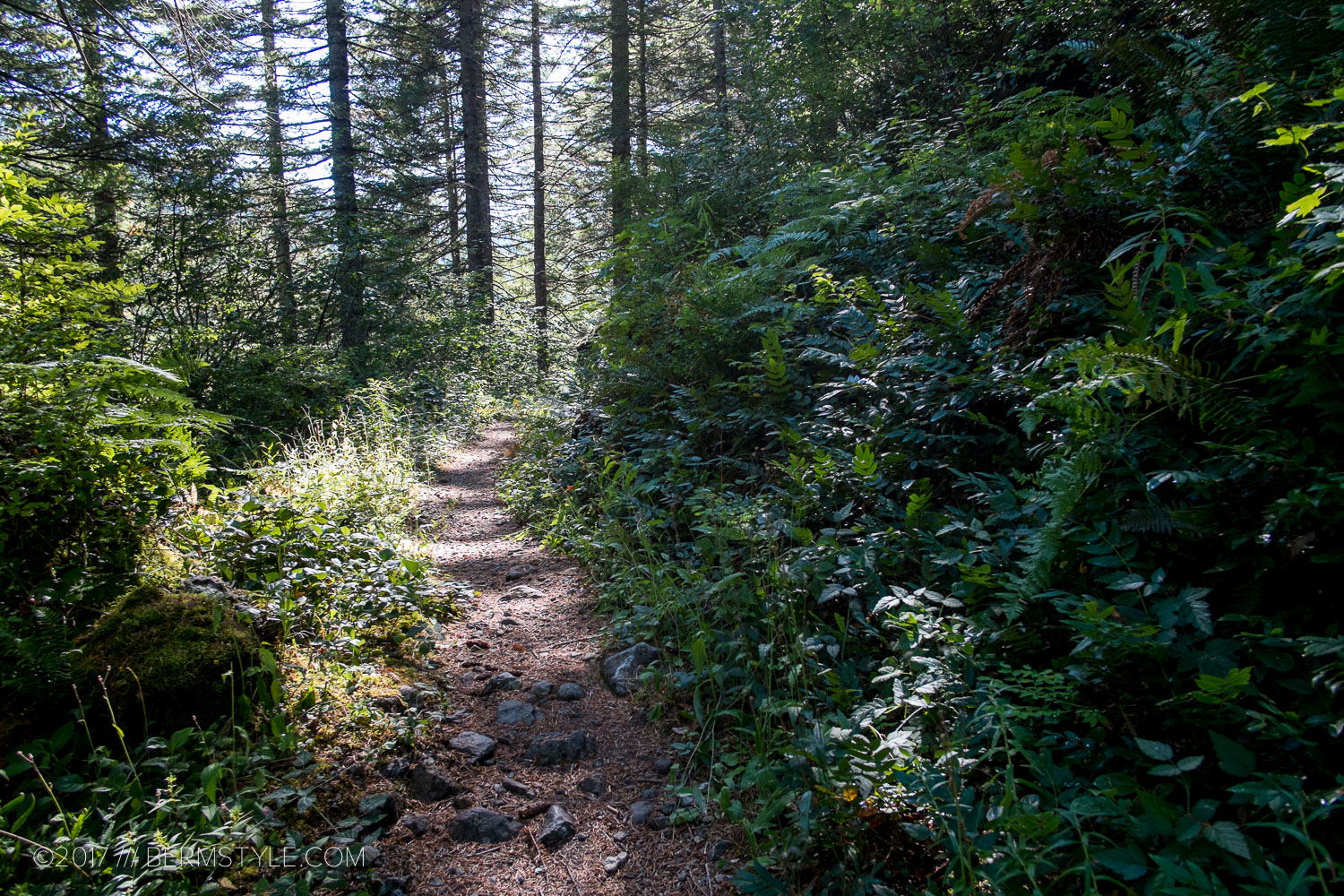 Much of the wooded single track looks like this.

You get out there when doing this loop, so when heading out pack your full backcountry riding kit with plenty of water and enough tools to keep bikes running.

There are a few ways to do the loop. On my first attempt I started from the main parking lot, riding the single track in a clockwise direction. I hadn’t actually looked at a map of the trail system at this point and figured I’d take the single track to the Cold Creek descent as opposed to the fire road. 16 miles in I realized that due to my late afternoon start (I thought I was taking the long way to descend the Cold Creek trail, not the loooong way) I wasn’t going to make the entire loop before sundown and took a bail out route down logging roads in the dark. 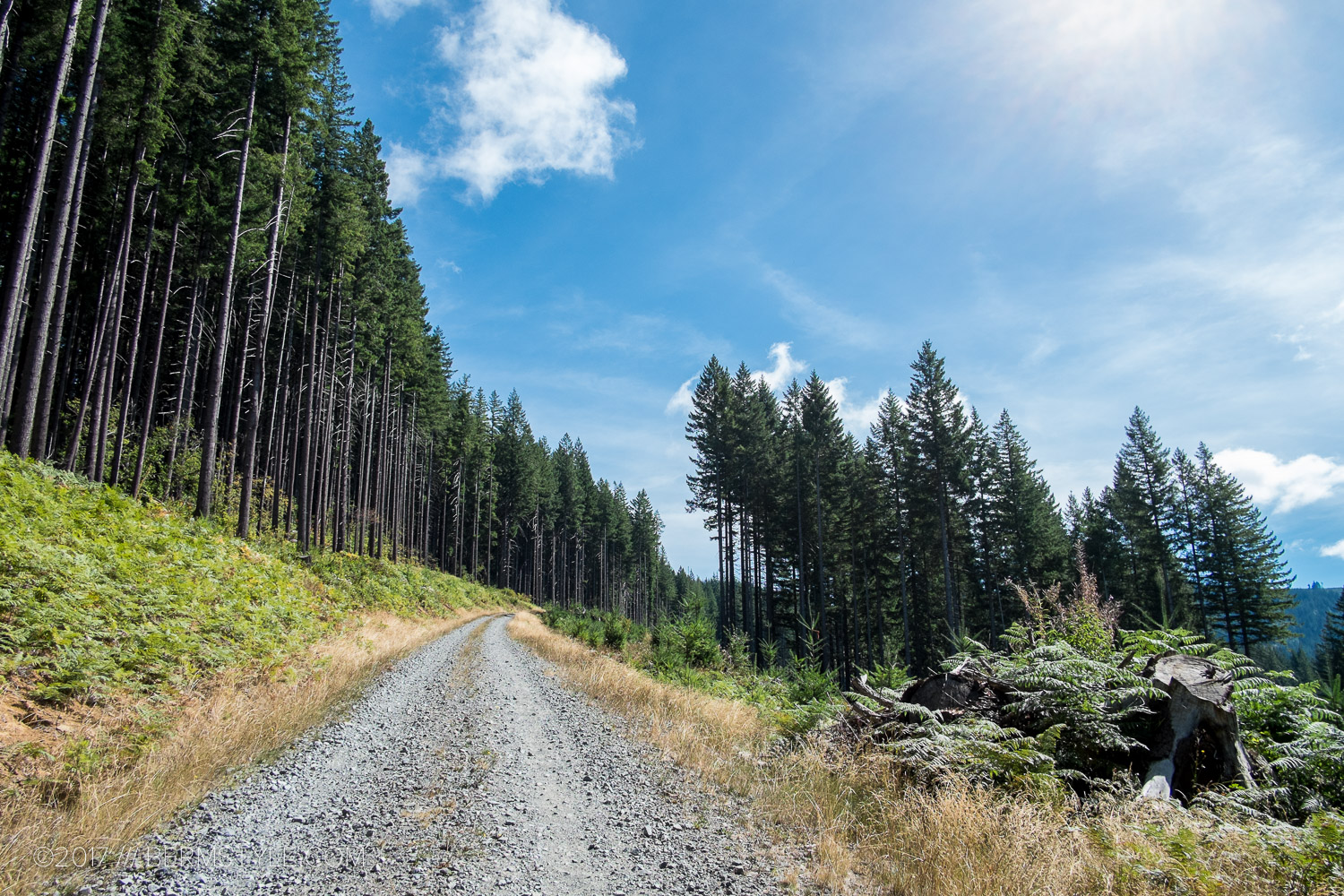 Starting off. I’m not a fan of the climb up this road, and would prefer a single track with shade.

My riding companions Dennis and Carlisle had a good route planned for the day. Beginning our ride at the Rock Creek Campground, we bypassed the initial single track, riding the logging road to the main parking lot to straight to the initial climb. Getting it out of the way as quickly as possible, we headed up the route taken by riders looking to ride the Cold Creek descent. At the clear cut we started up the single track, pushing our way to the top of the scree field. 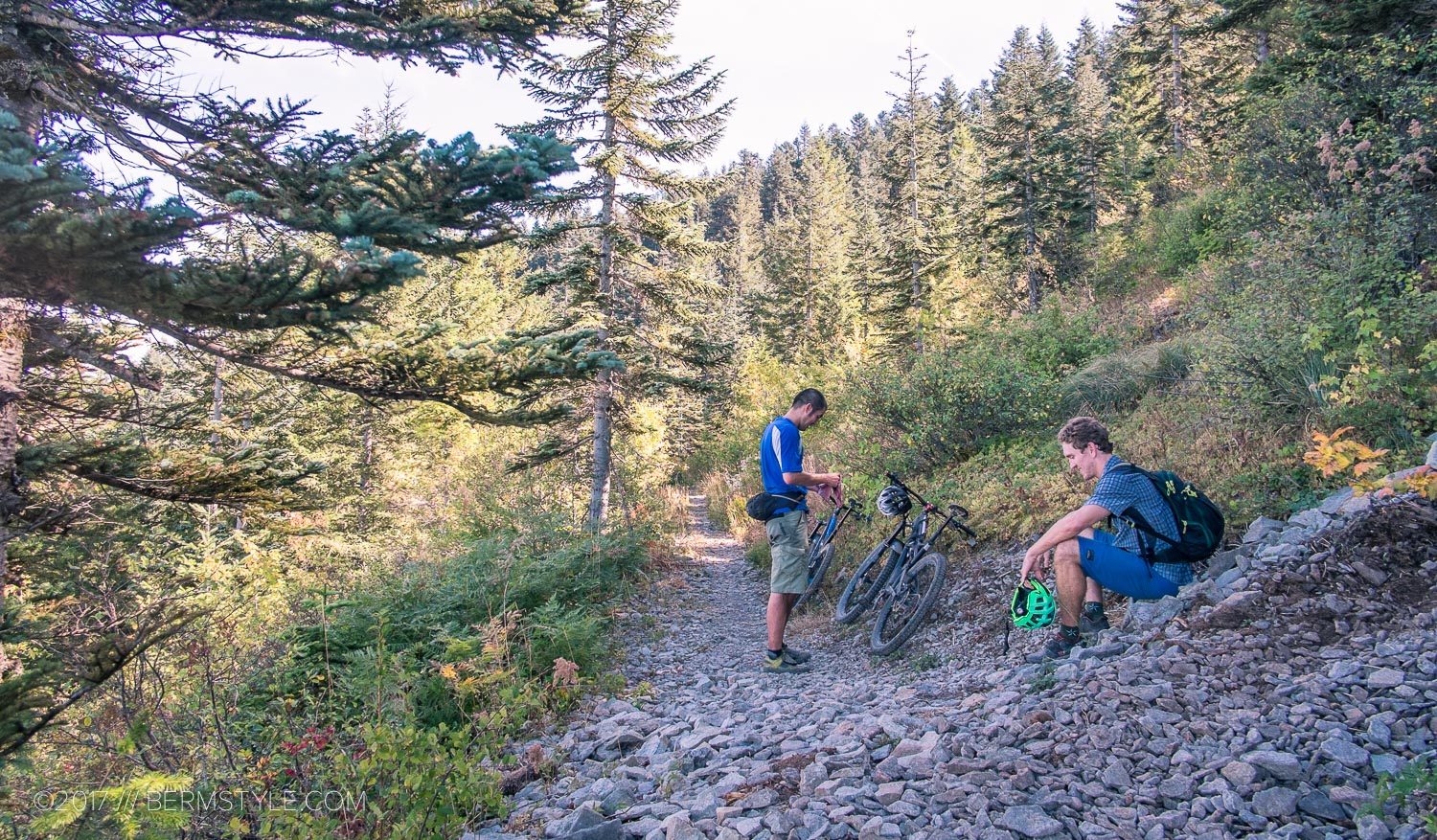 Taking a rest break at the top of the loose rock section before heading on to the loop.

Funny enough, I thought riding Cold Creek was our plan for the day, and neglected to pack my water filter. A 20 mile day on a single bottle is a bit much, but I managed to pull it off without risking tainted waterfall water, with a few borrowed sips of water from my riding parters Dennis and Carlisle.

Knowing I was in for a solid pedal meant conserving energy. It didn’t help that sections of the trail were destroyed as a result of the ongoing timber harvest, and we ended up carrying our bikes on a number of sections. 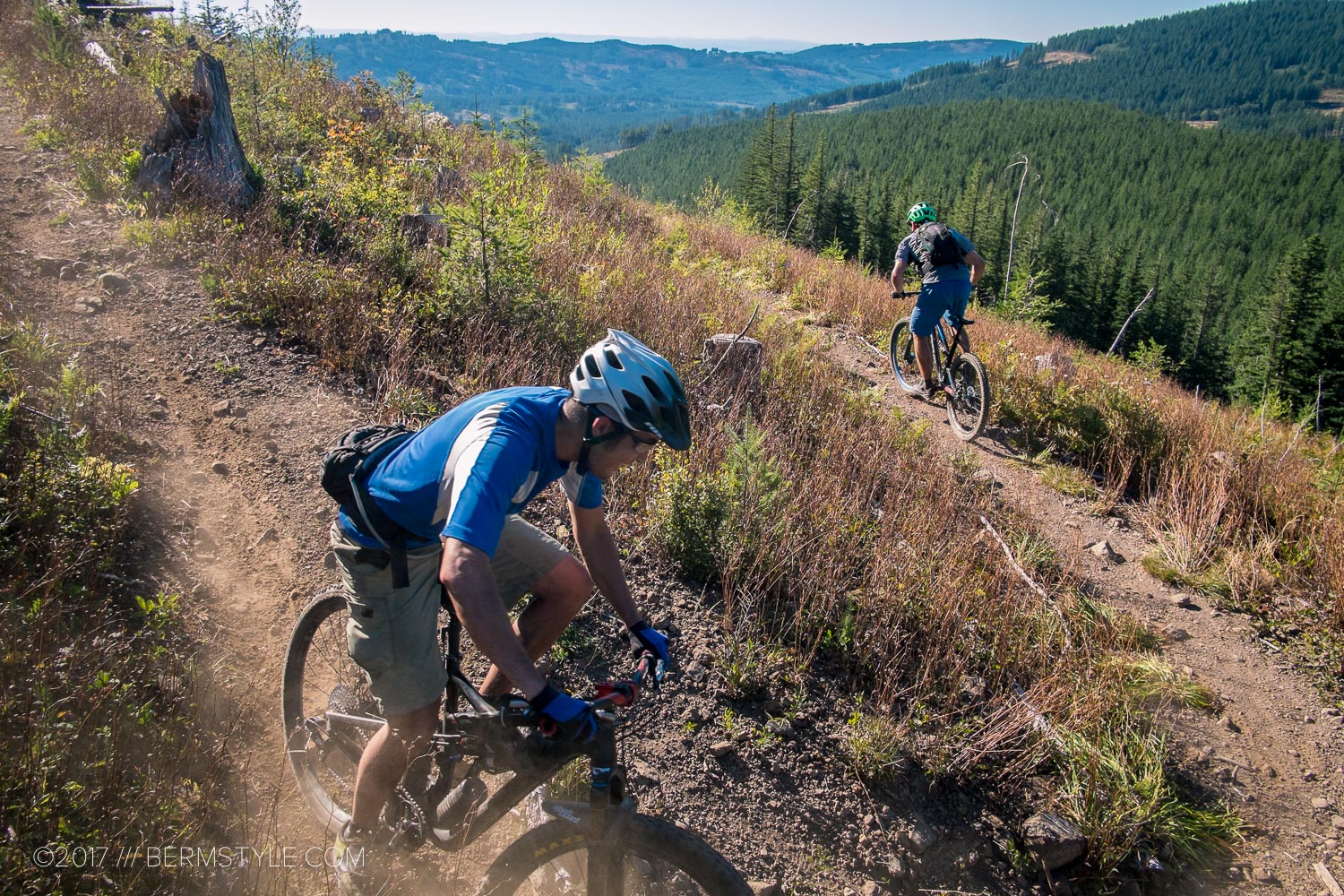 Dennis chases Carlisle through a switch back in a clear cut section.

Once we reached the summit, the trail for the most part traverses the ridgeline, diving in and out of wooded areas. Getting the major climb out of the way early meant having more fun on the descents. Most of the other climbs running counter clockwise are fairly short in duration, plus you’re rewarded at the end with the fun, flowy mostly-descent to Rock Creek.

There are horses on the trail too, and you’ll want to keep an eye out for far too frequent piles of horse crap littering the trail. For the most part our encounters with equestrians have been positive, we’ve also encountered several groups of inexperienced riders that simply wouldn’t allow us to pass, forcing us to follow them at a snails pace until they reached a trail head. Fortunately they tend to stick close to the Rock Creek campground. 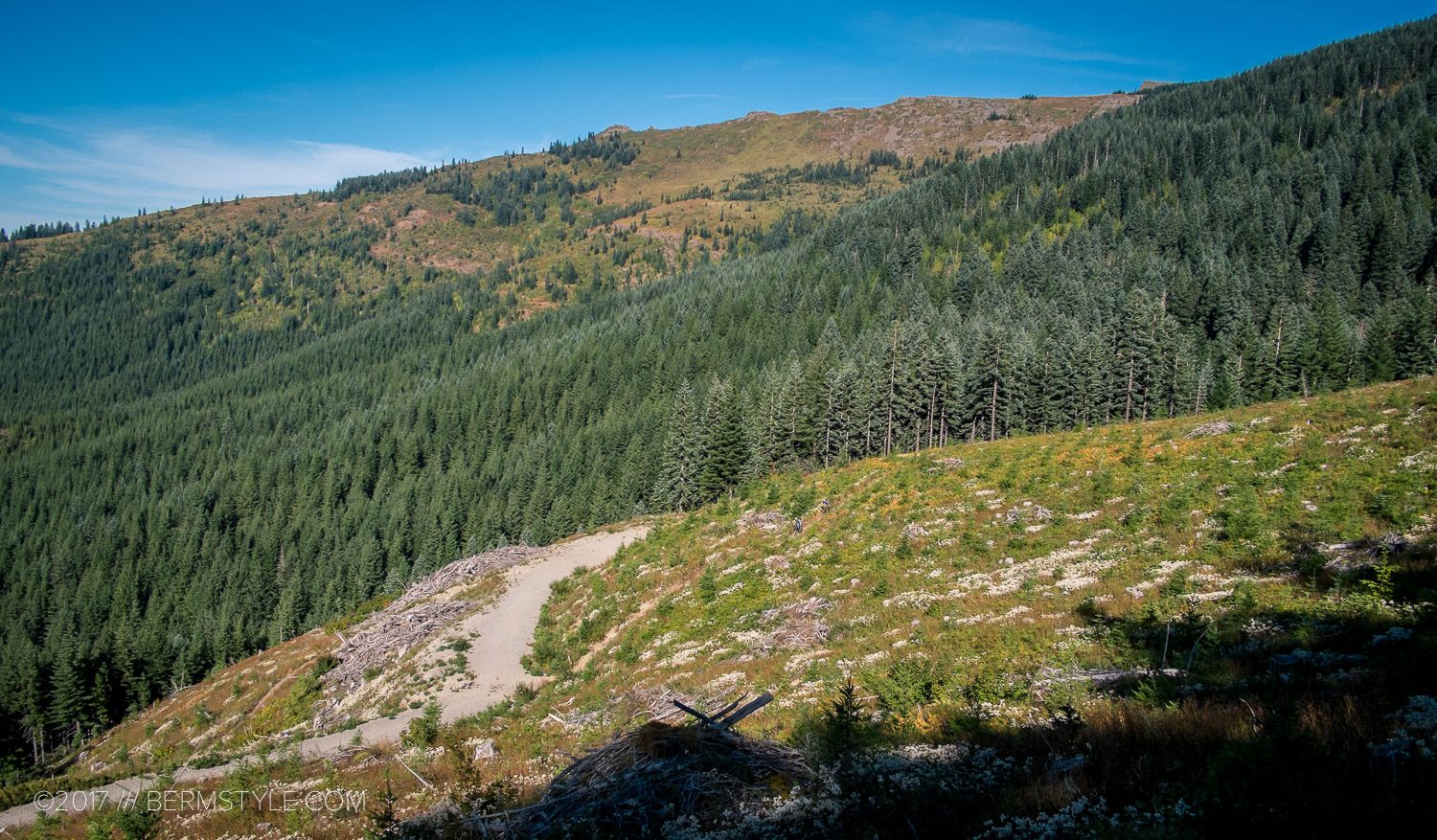 It’s also worth noting the Yacolt Burn Forest is a working forest, which means there is active timber production. When we were riding the trail this weekend we encountered signs of active logging, as several sections of trail were blocked with machines on site. Fortunately (or unfortunately depending on your point of view) the trail is still open on the weekends. During the week they’re closed for logging. 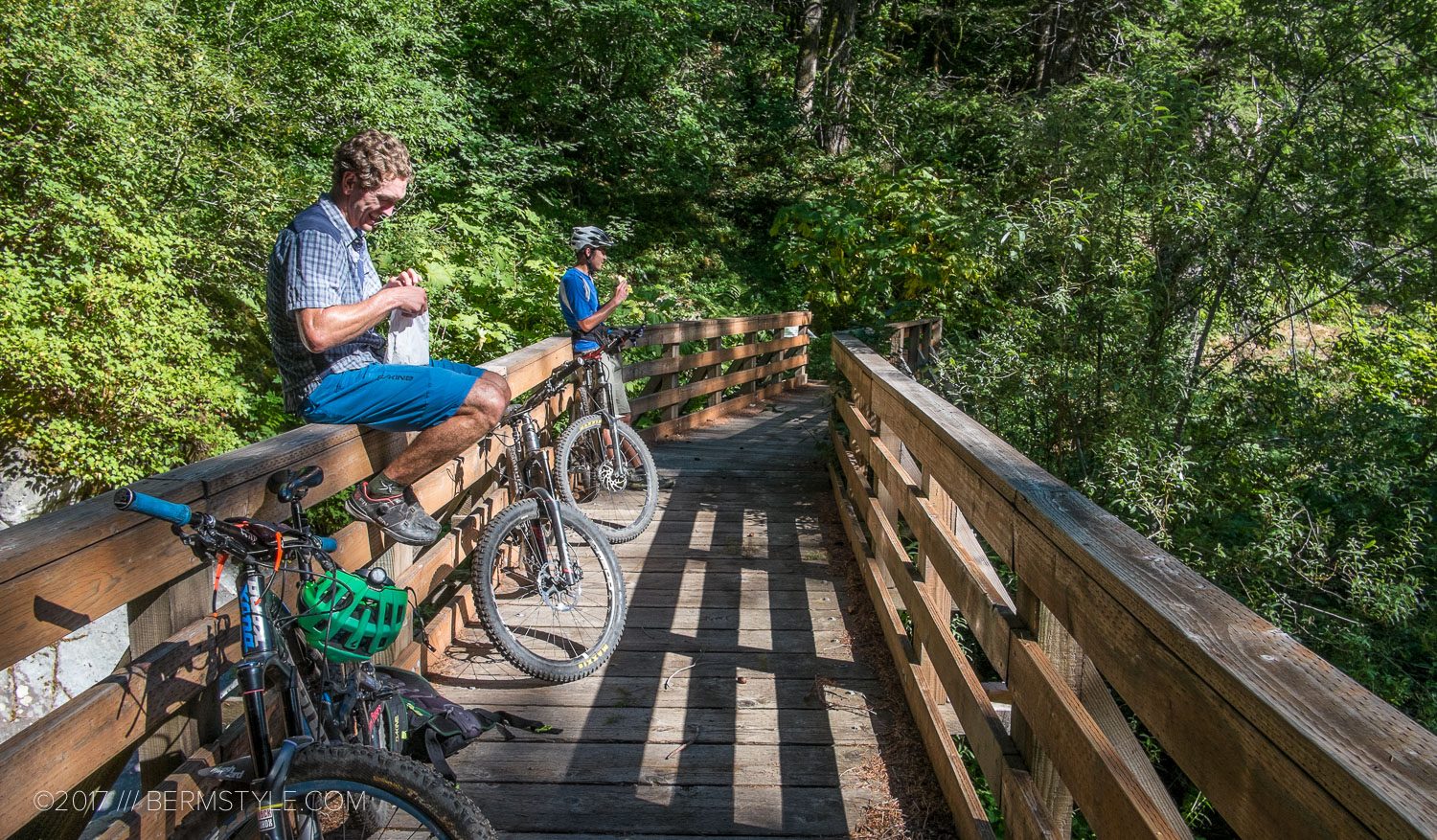 For the latest update on trail conditions visit DNR.wa.gov/Yacolt. You’ll need a visibly posted Discover Pass for use at all DNR managed sites and trail heads. An annual pass is $35 with a day pass running $10. As a bonus, access to no-fee campgrounds is included with a Discover Pass. 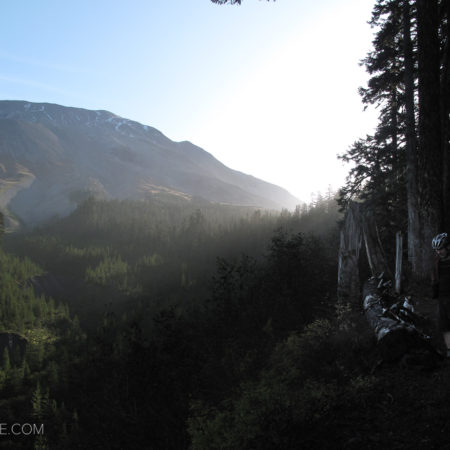 Mountain biking 70 miles at the Age of 70? Local Area Mountain Bikers Set Upon an Ambitious Quest 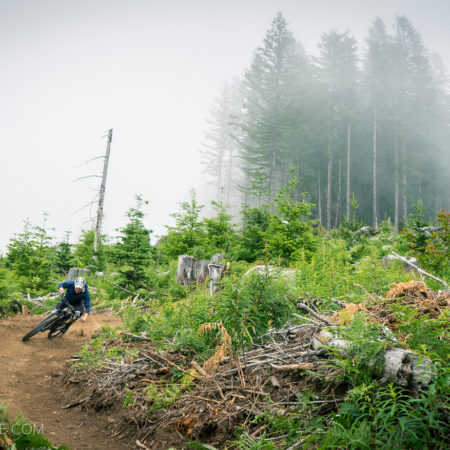 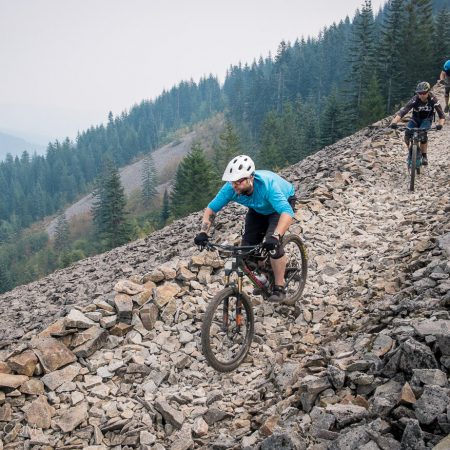 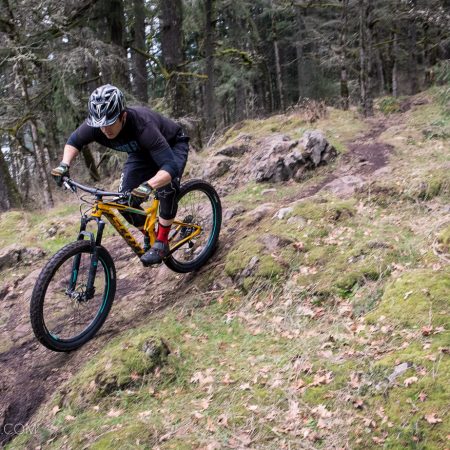