The small town of Sedona, Arizona is known for formations of red rock that poke out from a sea of green. We’re more interested in the miles of single track that surround the town, and the temperate, semi-arid climate that make it such an excellent winter time destination. During our recent visit, the temperatures varied from low to mid 50s with brisk nights ranging in the 20s in the evenings. 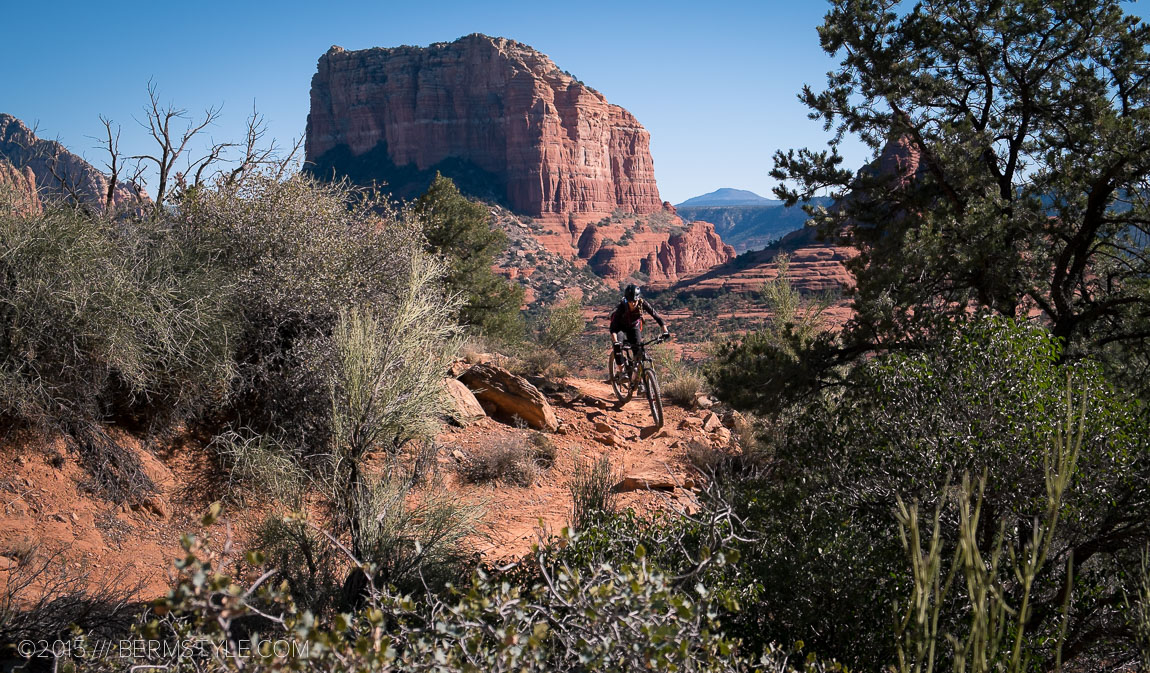 Made in the Shade Trail (a not shady section)

Once it warmed up enough to want to rise, we crawled out of our sleeping bag and headed back to the Village of Oak Creek. After breakfast, we headed across the street back to the Bike & Bean. The guys at the shop recommend starting and leaving our car there and we happily obliged. Heading up and across the street we began checking trails off our list starting with Made in the Shade.

Next time we’ll be hitting the Shade from north to south as it would have been significantly more fun in that direction. 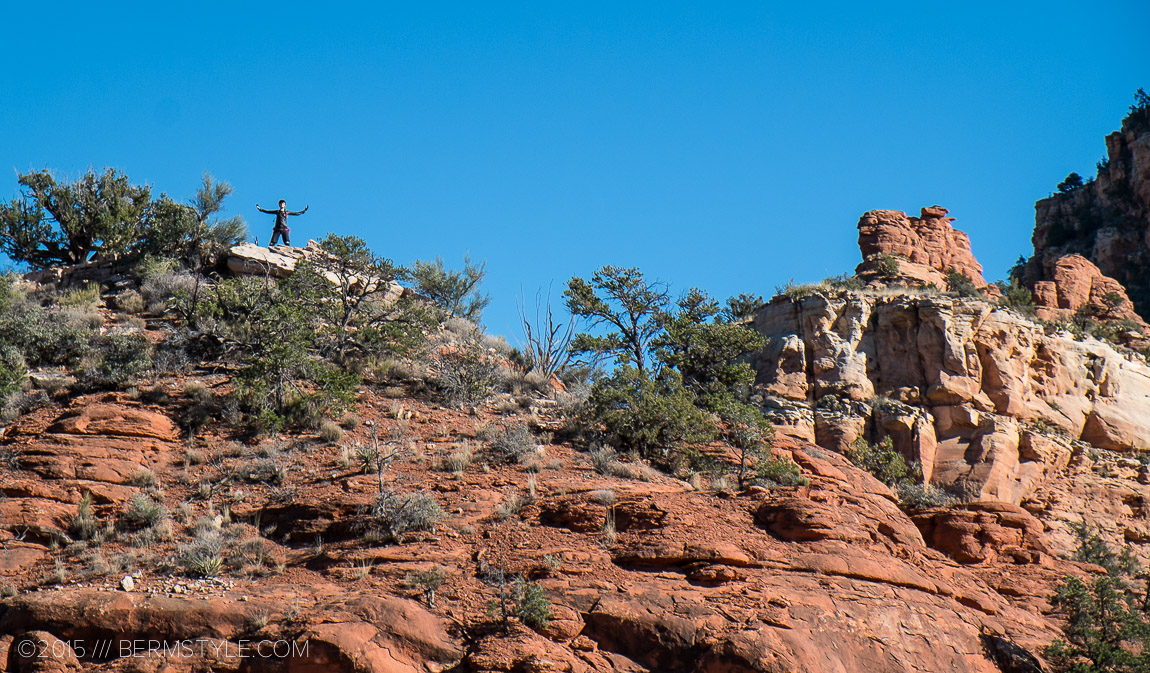 Inga at the view point on Hiline. #dointhelawwil

After the brief stint on Slim Shady we headed left up Hiline. Originally built by local riders as an expert/ advanced ride, we weren’t sure what to expect since so many of the trail reviews build it up as this “hardcore” trail. Hiline wasn’t a sanctioned trail until recently, but fortunately it was recently adopted by the Forest Service. 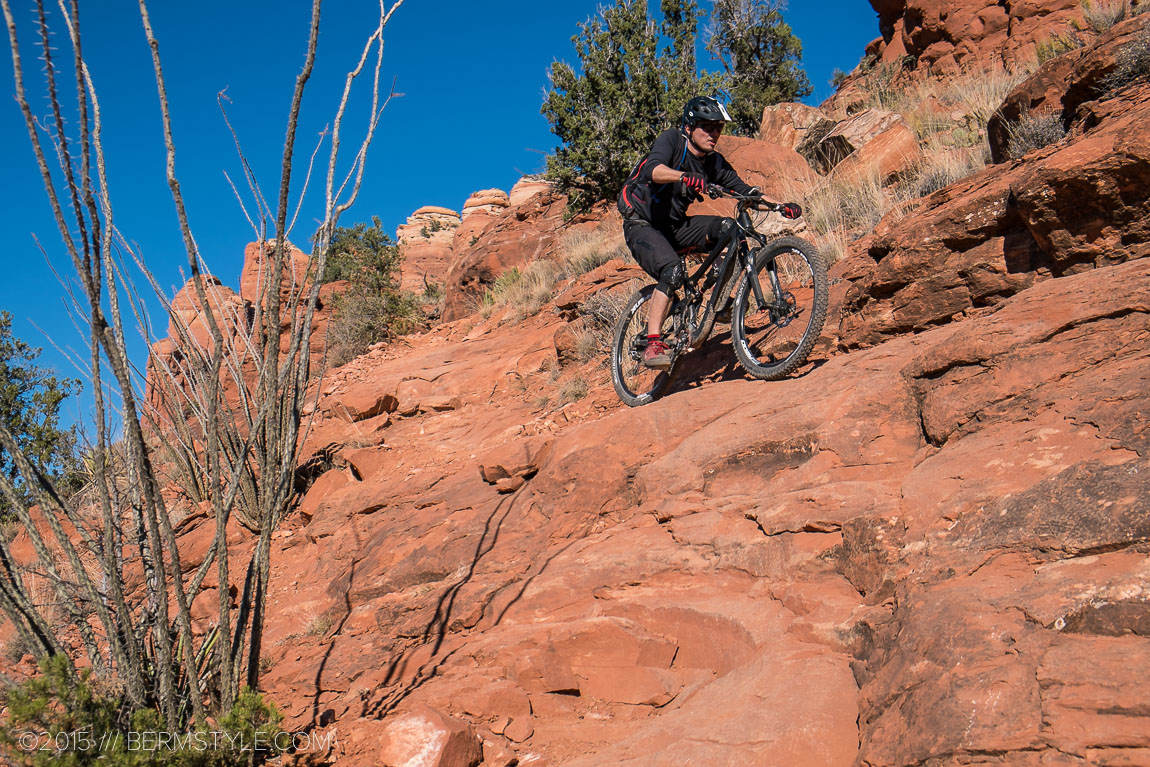 Coming down the double black section on Hiline.

Most of the trails are rated for difficulty based on the sheer exposure. Highline counts as one of these. It’s one of Sedona’s best though, one to put on any list. It’s not for everyone, but in a time when so many trails are being sanitized, it puts a warm glow in us to see good stuff like this sanctioned. There was a ton of signage, and with our map, getting around was really easy.

We had to stop quite often, as it was littered with hikers on foot, but the amazing views more than made up for it.

There were definitely some legitimately technical sections coming down Hiline. These put a rather large smile on my face astride my rock devouring 650b Nomad. 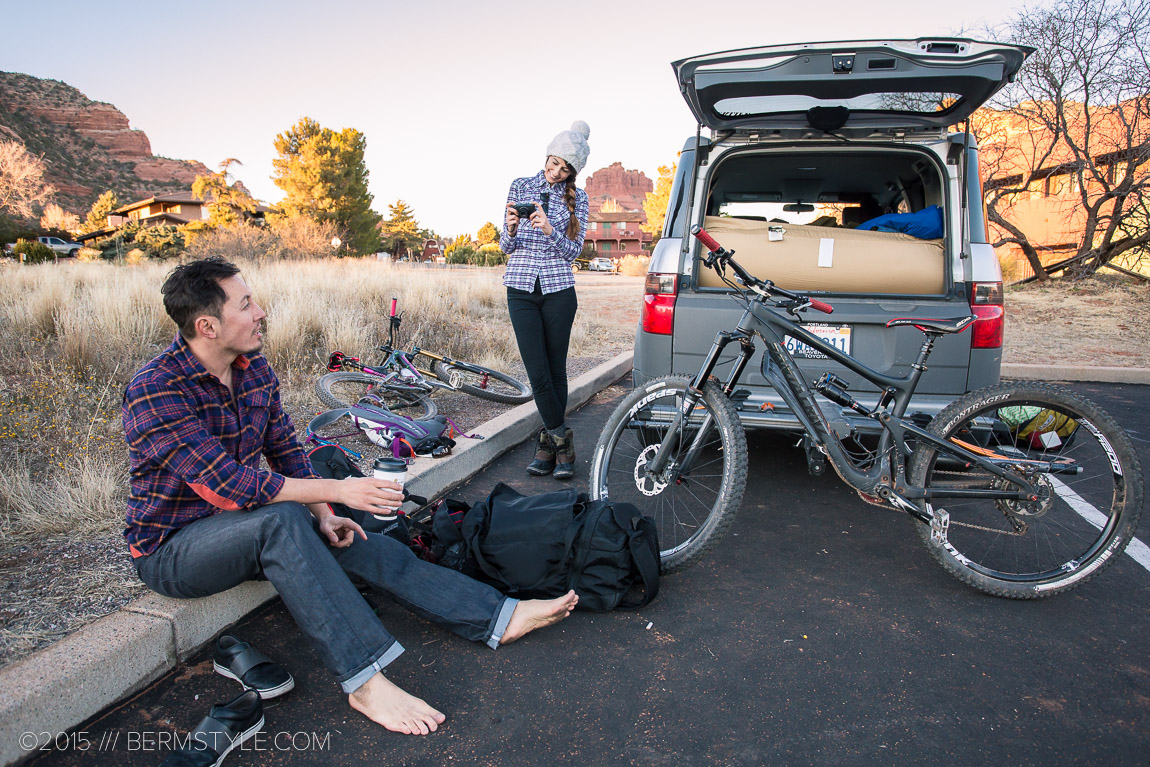 Our favorite parking spot in the Village of Oak Creek. Inga snaps a shot while I enjoy my day old coffee. #adventurelife

From Hiline we turned right on Baldin, taking it to Templeton and back to the village on Slim Shady. Though it was technically a fairly short day of riding, we took a lot our time up filming and riding, which sucked up a considerable amount of the day. 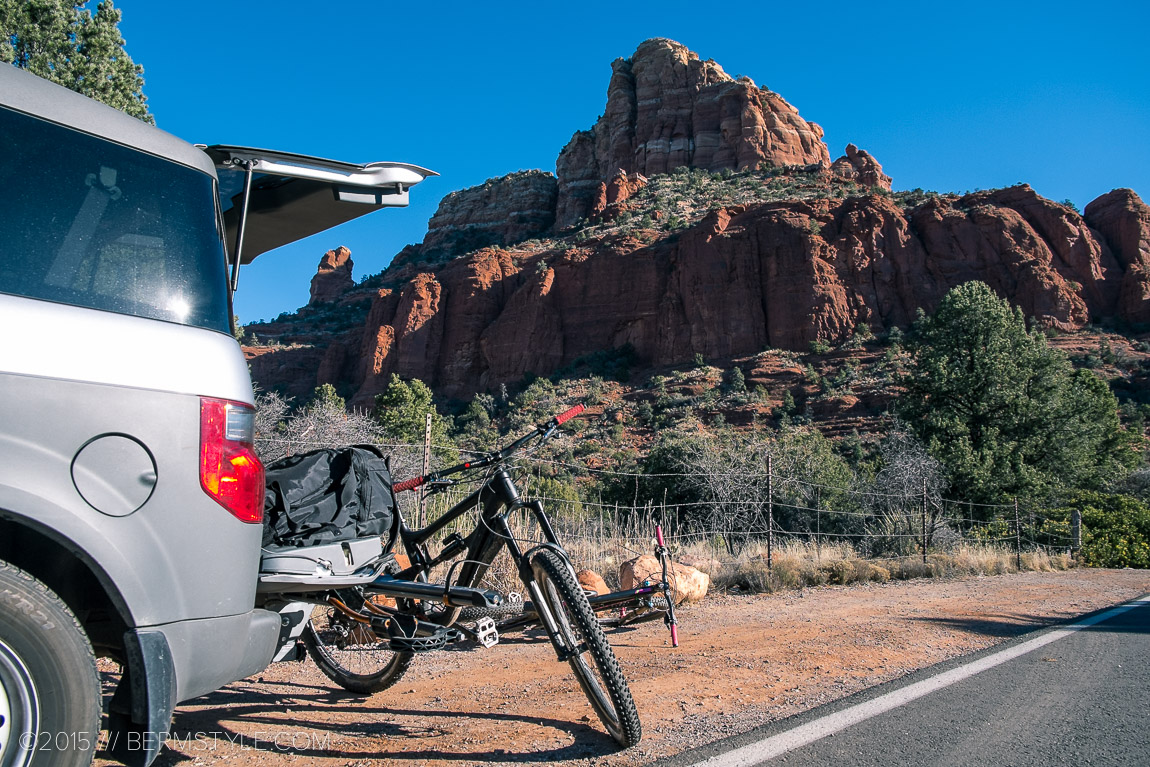 Getting ready to head up Mystic

At this point of our road trip we’d been shivering through a few cold nights and testing the limits of our new sleeping bag. Though it was rated at 20º and kept us warm, a few days without a shower meant we were ready to get cleaned up. Before leaving town we decided to check out and experience the Pig Tail, which we had bypassed before due to concerns with running out of light. 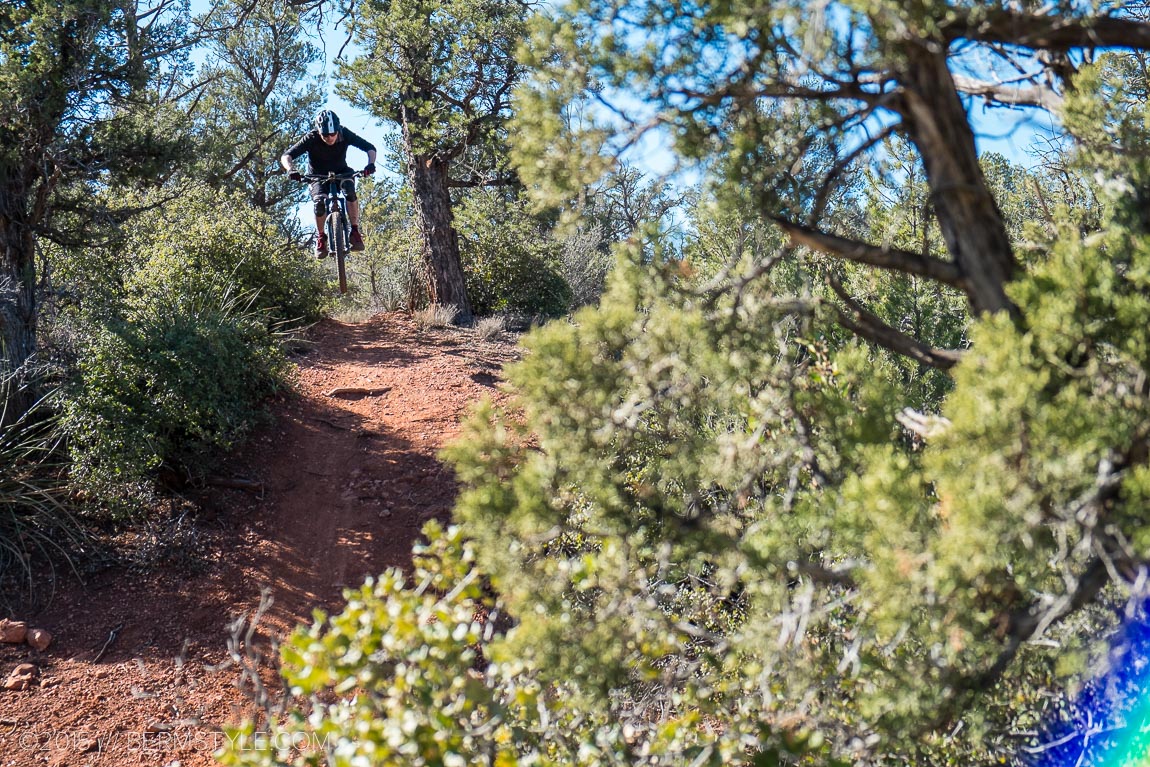 Pig Tail is Sedona’s version of a flow trail, with a few built up berms, and a rock slab step down.

The Pig Tail is basically Sedona’s take on a contemporary flow trail, and one of the only trail in town that had built up features (as opposed to purely natural). It was fun, but definitely short. Next time we’ll add it to the route when hitting up the H’s. 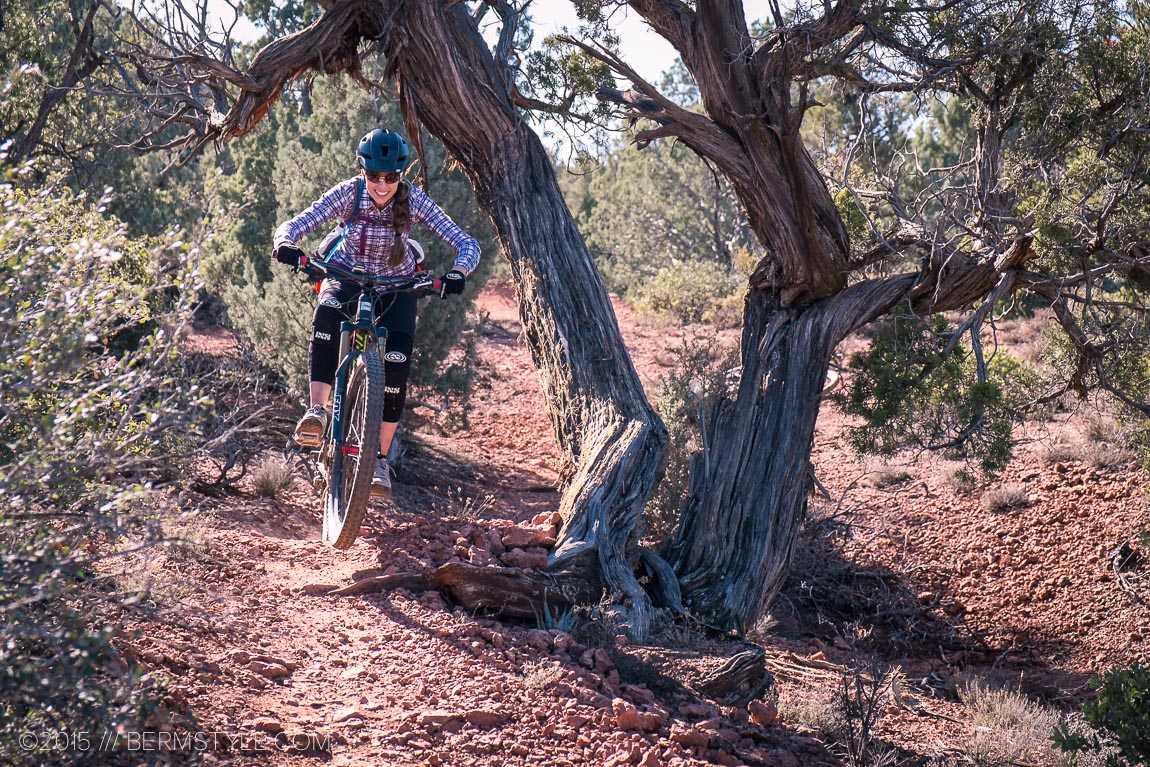 There was a big cold front coming in, and it was slated to snow, so we elected to keep our day short and get out of town before the snowfall hit. 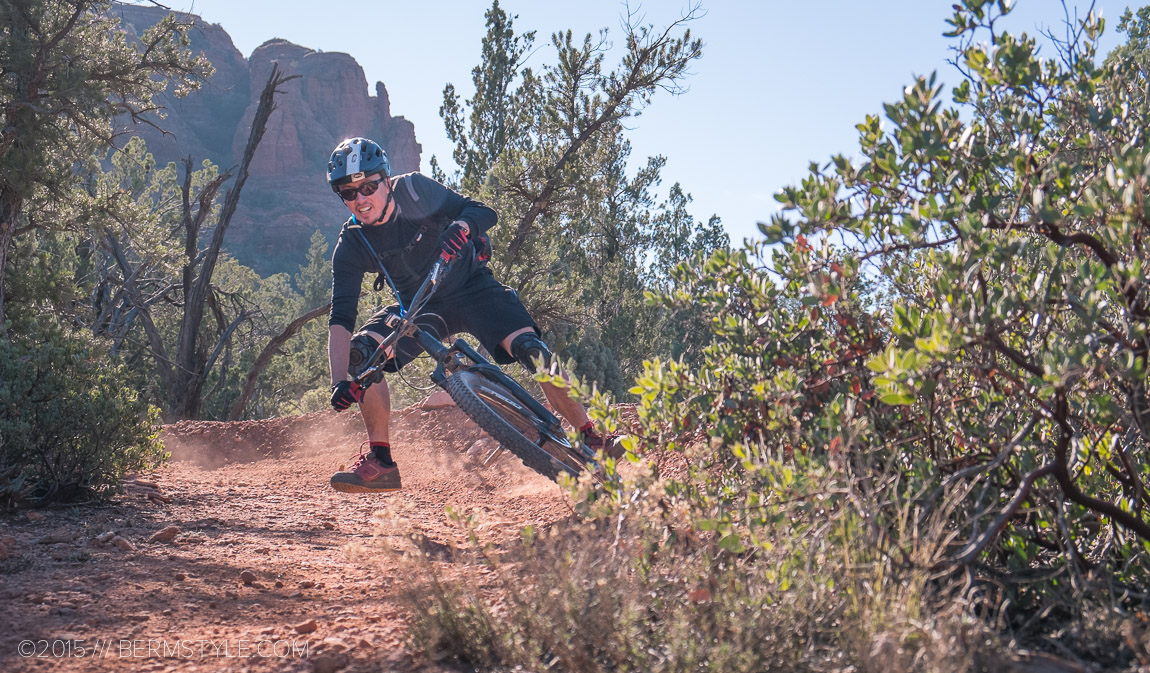 After washing out and laying it down on a turn the day before, hanging a foot out felt prudent.

Three days is not enough time in Sedona with all the new sanctioned additions to the trail networks. When we were last there, most of the sweet new trail was unsigned and considered local secrets. Sedona has really grown into its own as a MTB destination thanks to the efforts of local trail advocates and the cooperation of the land managers.

There were so many new section of trail on the map we had yet to see that we felt like it was just a warm up. We’re already trying to figure out when we can make it back. (hopefully when it’s a bit warmer and the days are longer, so we can use our solar shower and get cleaned up at the end of the day) 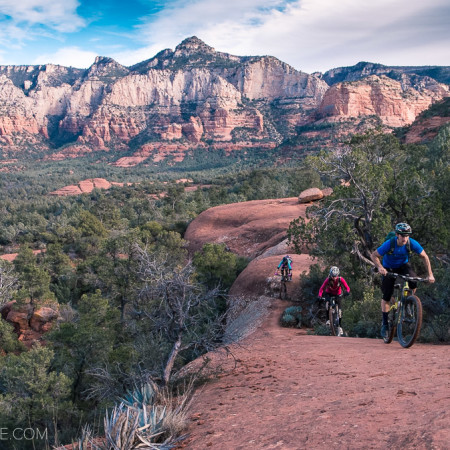 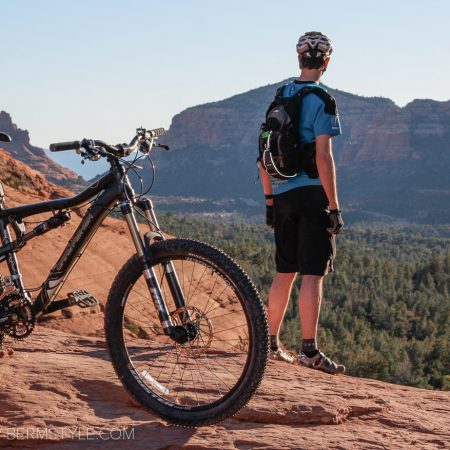