The Carbon V-10 is no longer cutting edge news, but that doesn’t make them any less desirable. In fact, the new carbon wunderbike is finally available to the masses, and has even been added to the Santa Cruz website. At $3k for the frame only, the baddest on the block doesn’t come cheap, but with Decline magazine’s test of a 34lb World Cup level DH bike, many eyes are on this ride. It doesn’t hurt that it has already caught several titles before it was even released. Last weekend I made the trek over to the Northstar bike park to sit in on a BikeSkills clinic with the Santa Cruz Syndicate, and spend some time gawking the carbon desirables from Santa Cruz. In addition, the SC demo truck was in the house, and lucky riders were able to do hot laps on some of the most desirable rides in existence, including the carbon V10, carbon Nomad, and more.

After following Greg, C.G. and Peaty down runs like Livewire, I was able to see what riding a 34lb. DH bike was capable under a world class pilot in person. (and eat some of their dust) The guys were riding incredibly mellow, and not pushing it in any way- they were there to coach, and simply were having a good time rolling down the hill behind the students, and giving tips and advice along the way. During one run  following Mr. Minnaar down the hill, we were behind some students rolling at a rather slow rate. We were barely going fast enough to clear some of the table tops on Livewire, yet he was able to boost a jump, popping at least 6 feet off the lip, and getting fully sideways. It was nothing short of awesome. It also showed what you could do on a light-as-hell DH bike.

Minnaar in action on the kick-ass Livewire jump trail.

During some down time, I had the chance to peep some of the details of their bikes. The first thing that stood out to me was the number of headset spacers they were all running. A lot of the guys I ride with run their bars as low as possible, and cut their steerer down. Having spacers above the top crown is perceived as unanesthetically pleasing. I generally agree with this mindset, but retain about 20-30mm of extra steerer just in case. You never know if you’ll need more- in the event I was to run a new frame with a longer headtube, having the excess steerer means not having to replace half of the fork. (which a few of my riding partners have had to do- you know who you are!)

The Syndicate guys run a lot of spacers, for a lot of options.

Greg explained that his fellow teammates and himself regularly change the height of their cockpit, based on the elevation drop of the courses they ride. The bikes are set up to be run as low as possible, with a zero stack headset. All three of them were running zero-stack headsets from Chris King. (I’m willing to bet that their input was a factor in the recent redesign of the top race of the King headsets as well- if the headsets didn’t stay tight on my bikes, there is no way they stayed tight under a top level rider on a WC course) On flatter courses, they will run their bars lower, while on the steep and burly world cup courses they will run their bars significantly higher. (in longer travel mode as well, of course) Greg also noted that he has gotten used to the higher bar position, and has been running it more and more, regardless of the course.

Cedric Gracia takes his time in dialing his ride before getting his shred on.

Set up of the bikes is obviously very important to all of them, and I watched as Cedric worked on his bike for some time before being ready to ride. While they all have a mechanic that handles the major stuff, each of them tend to the minor stuff such as bar height, and angles of the bars, levers, and more. I was a bit surprised to see Cedric running clip-in pedals at the bike park, (while rocking the Minnaar 5.10 models no less) but didn’t get a chance to ask him how often he switched back and forth.

I’ll admit it: I want one. Peaty’s ride.

Unlike Peaty or Minnaar, Cedric was running Mavic wheels. He has his own program, and list of sponsors, so I guess the question should be if we’ll be seeing Mavic carbon rims on his bike in the near future? He is also sponsored by Leatt, and wore his brace the entire time he was riding. It was also interesting to see what rear shocks the guys were riding. CG and Minnaar were both running the new Rockshox Vivid air. It was also interesting to see the demo carbon v10s were spec’d with the Vivid air, but it certainly is a logical choice on a demo bike, as the air spring is easily tunable to rider weight. Unlike the others, Peaty was running a ti spring on a coil rear shock. That said these guys change their setups all the time. I found it interesting that Peat was also running clip-in pedals. 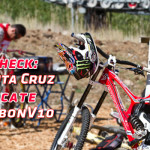