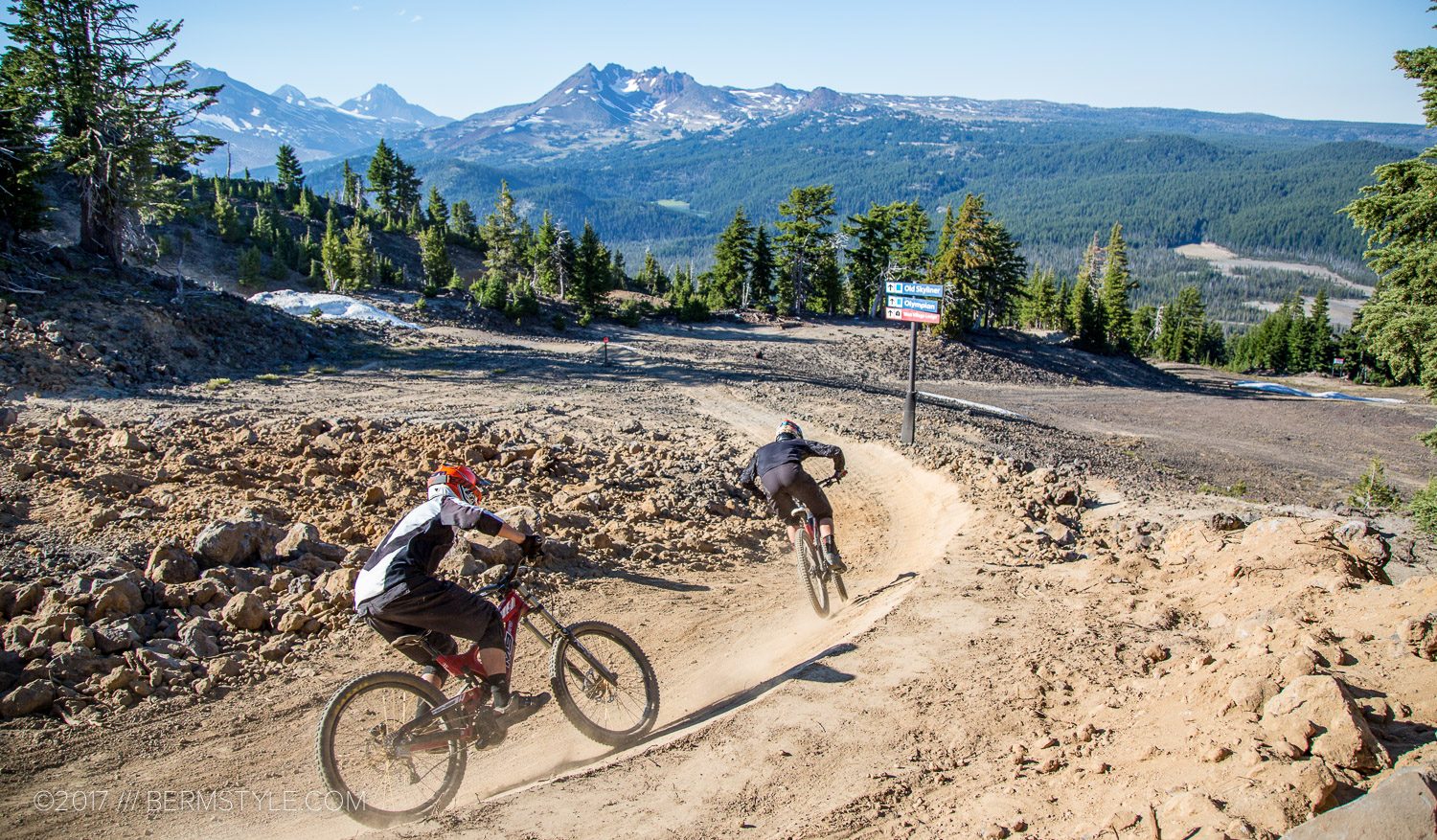 The epic backdrop at the Mt. Bachelor Bike Park.

A long winter season meant it would take the snow a bit longer to melt. This weekend the final – and one of our favorites – trail at the Bachelor Bike Park opened for business. Unfortunately, it didn’t happen in until late in the day Sunday. That said, a park ticket price of $39 and a relatively short drive make the trip more than worth the drive. 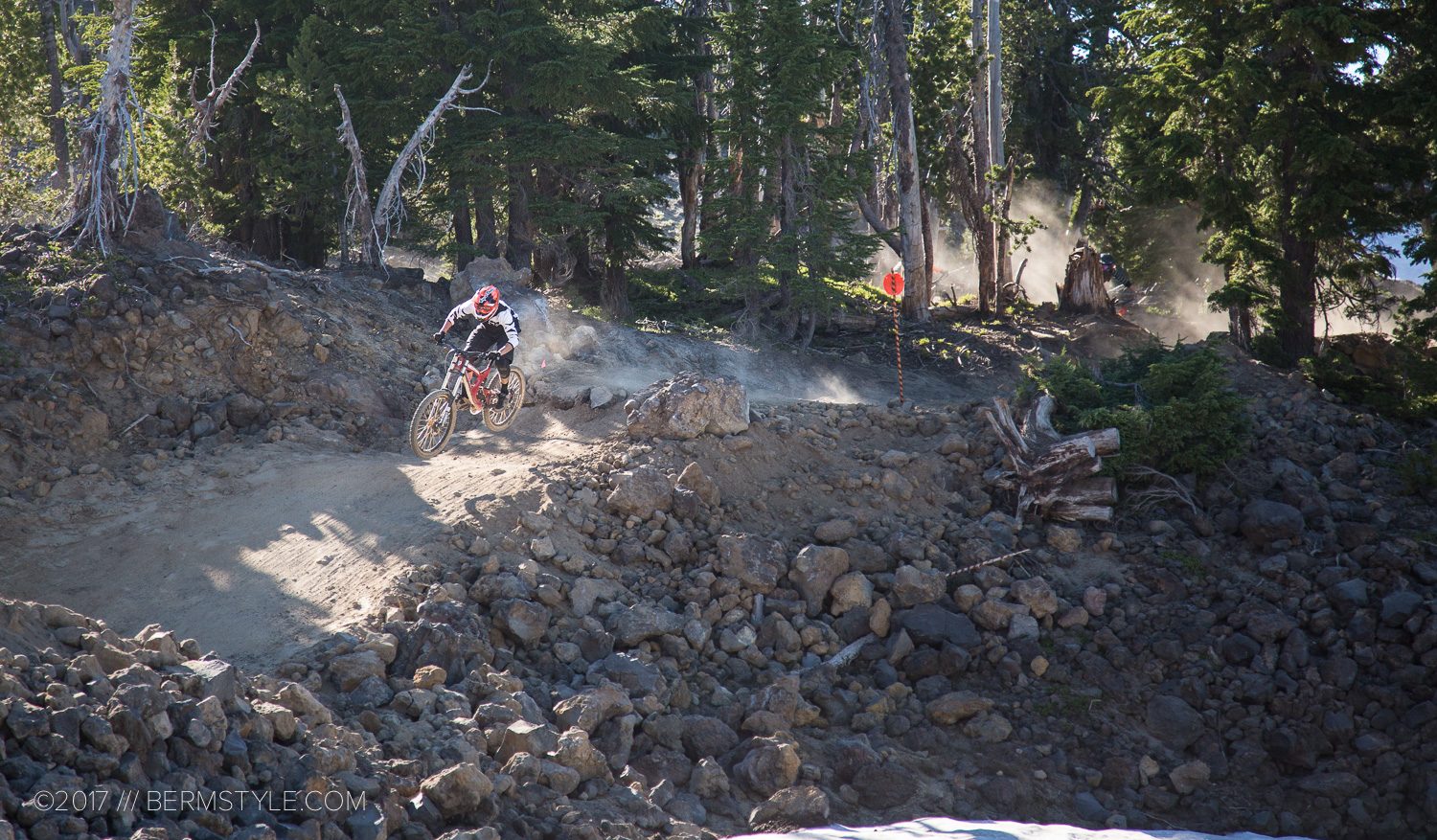 Although the snow is still melting, much of the trail is already dried out.

Getting a late start to our weekend, we didn’t arrive at the bike park at Bachelor until the late afternoon. Fortunately, the park is open to 7pm this time of year, and they offer a half price bike park ticket for the Twilight session (3- close, Friday-Sunday) that only costs $19. Running from 3-7pm, it’s a bargin and meeting the rest of our clan on the hill, I managed to get a good amount of riding in before retiring to the lawn chairs of our camp. 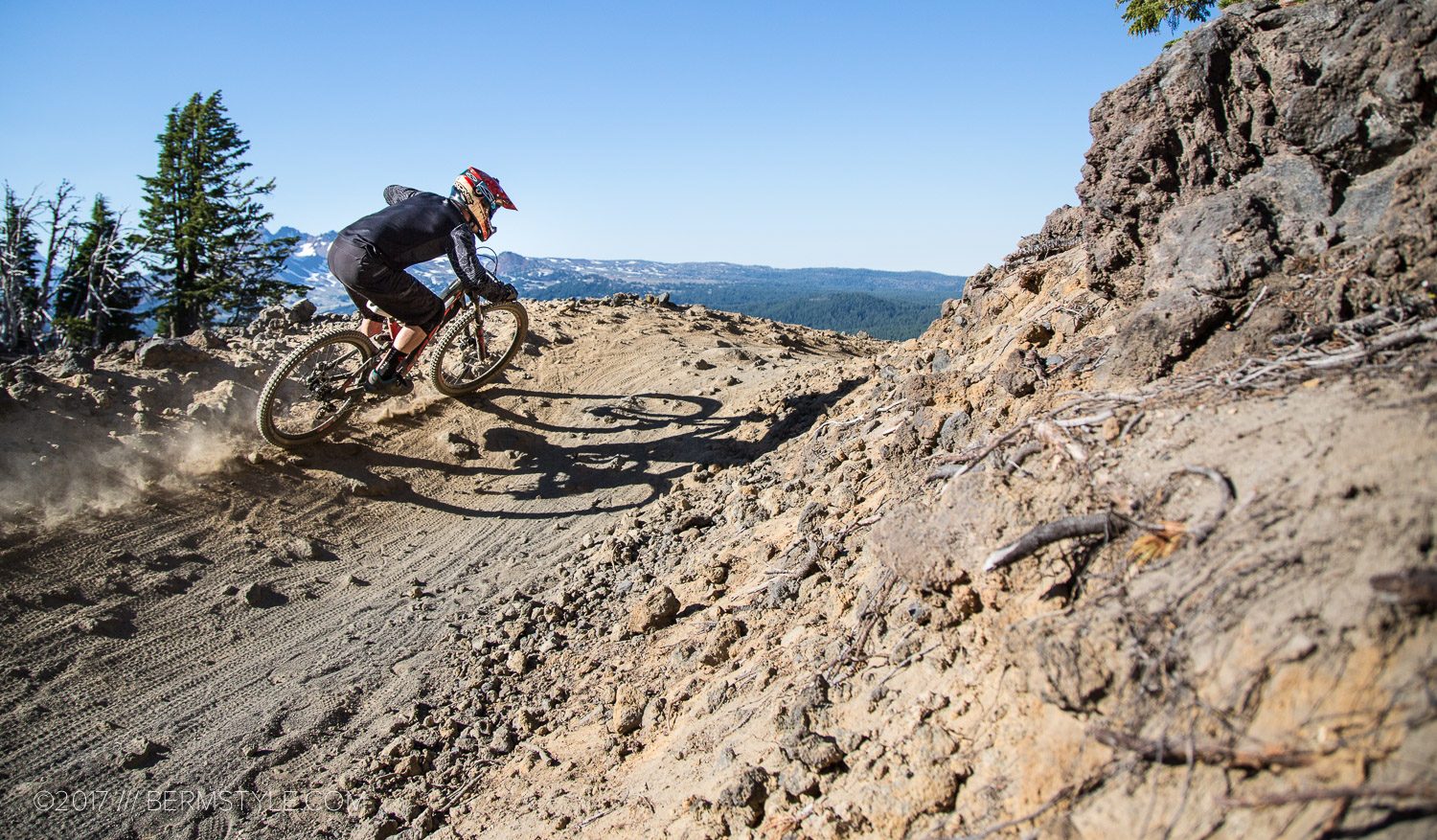 More importantly, I was able to finally log some saddle time on my new downhill steed — a Norco Aurum c7.2 — on some legitimately fun terrain. 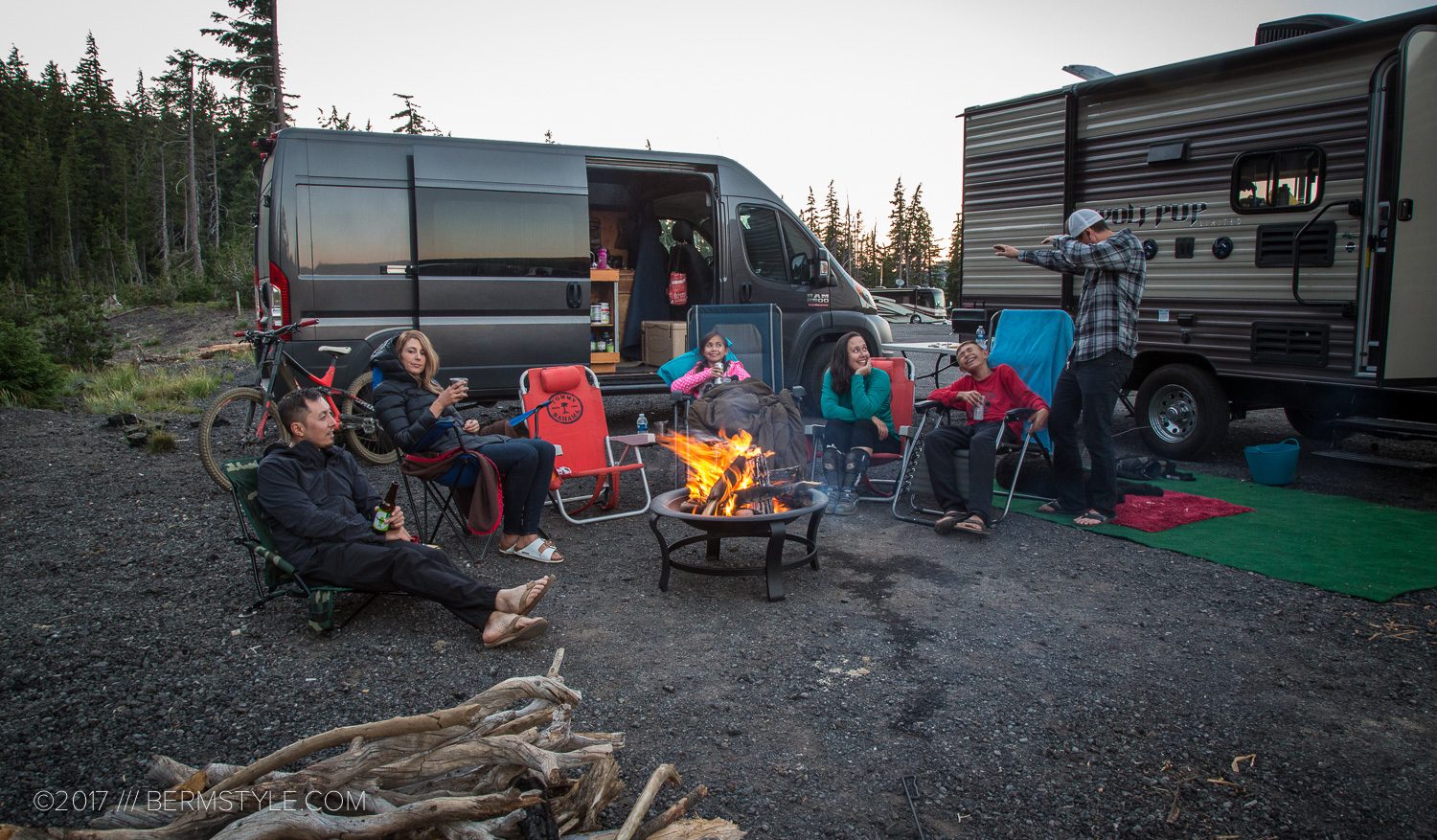 At the end of the day we reconvened at the parking lot where we circled up the vehicles and started prepping dinner. The temperatures are significantly less warm at elevation, a welcome relief over the temperatures in Portland. Multiple groupings of RVs littered the parking lot, with other clans setting up camps of their own to relax and ready themselves for the next day at the park. 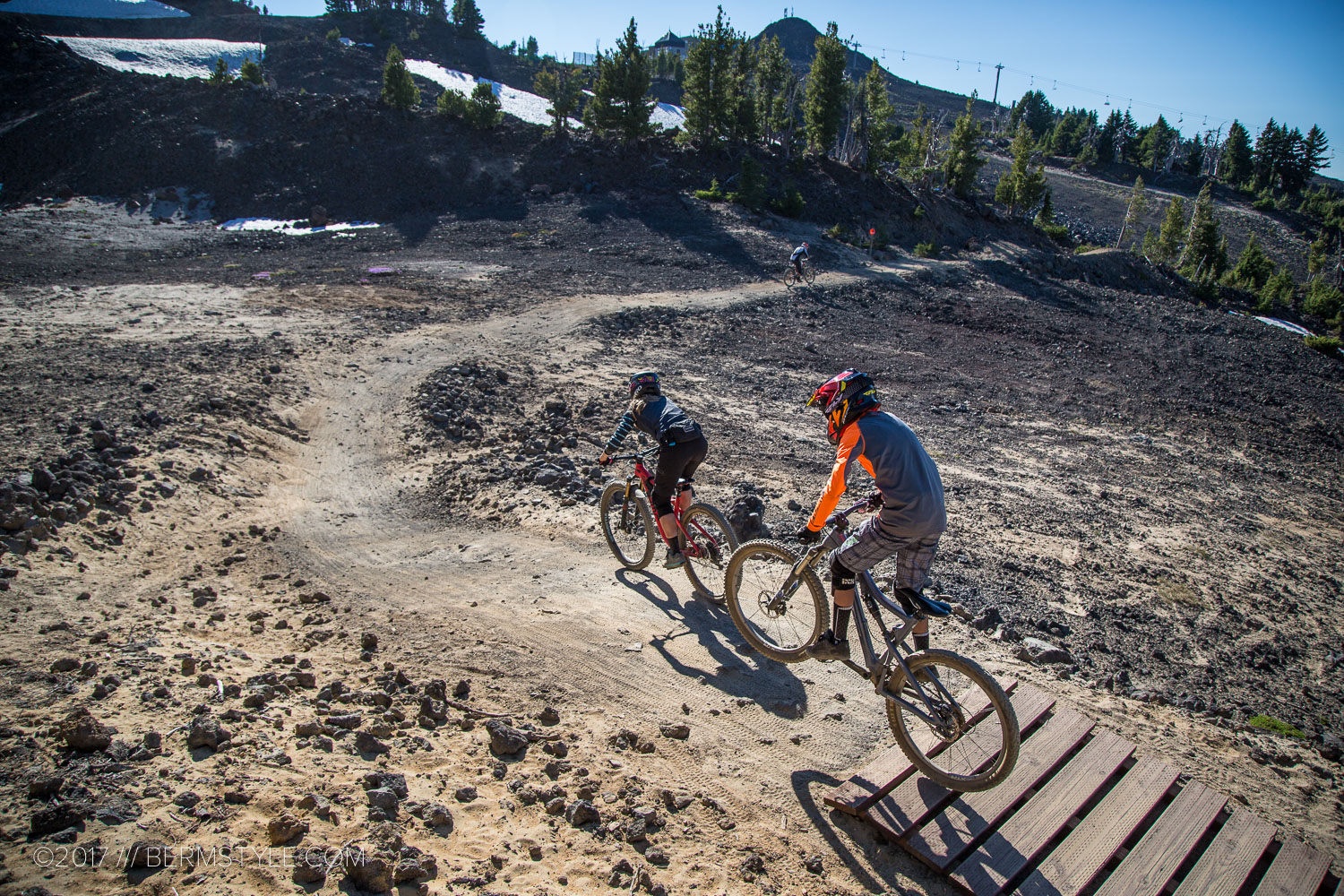 The fam on the trail

We enjoyed a leisurely morning hanging out at camp, as the park opens fairly late, at 11am. This time around, I opted for the Triple Ticket, which at $79 is good for any three days throughout the rest of the season. You’re essentially buying two passes and getting the third for free, which is a bargin. 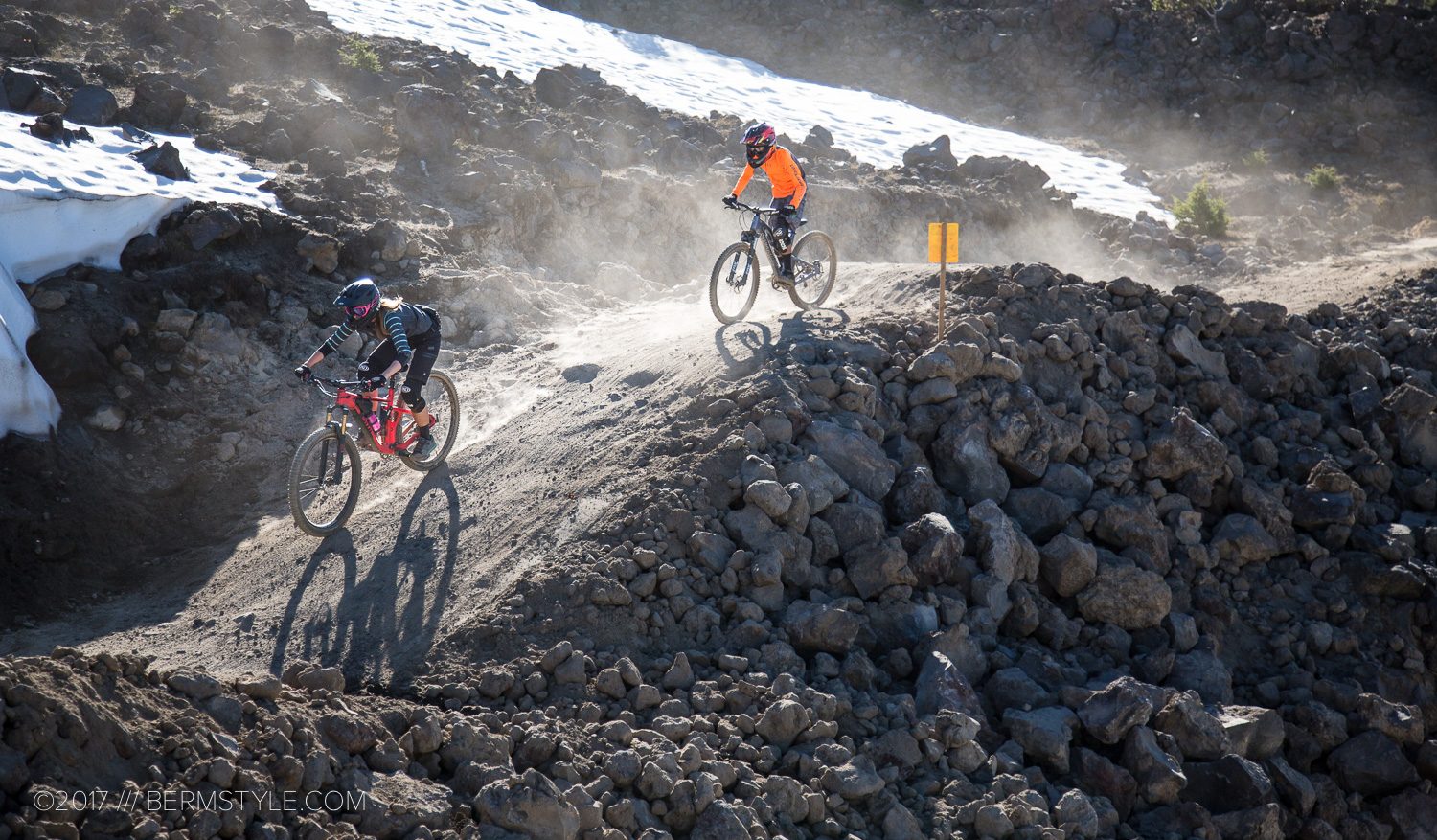 A season pass (before July 16th) only runs $159, which we had all discussed investing in. The late season made us balk at the purchase, but it also includes two free one day bike park tickets for Steven’s Pass, Schweiter and the Whitefish Bike Parks in Washington, Idaho and Montana.

Now that I have a DH bike again, I’m a bit bummed I didn’t see these perks, which I will have to investigate further for next season, and these are more than worth planning a trip around. 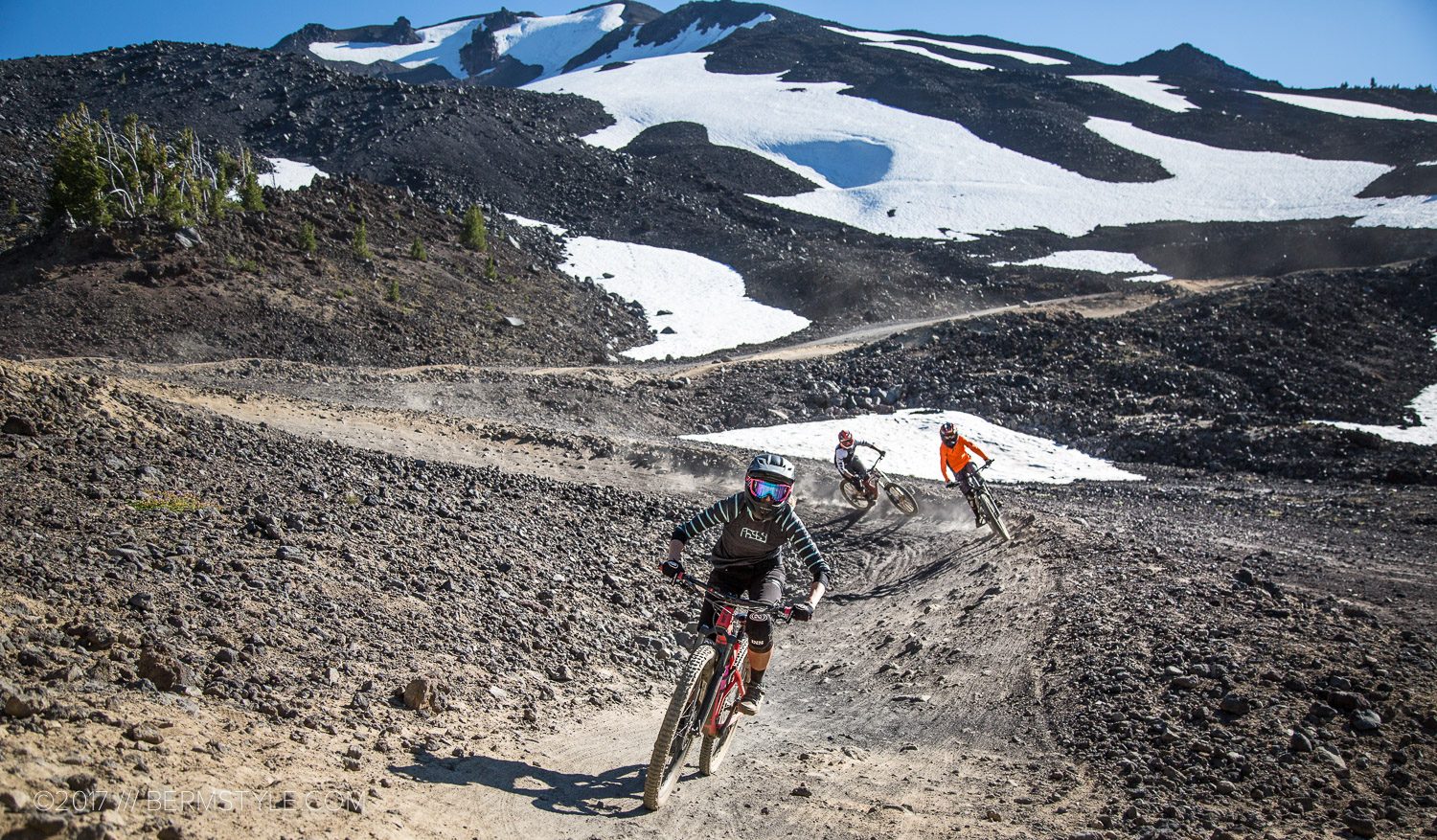 Train down the mountain

You don’t need a DH bike to ride at the Bachelor Bike Park. Many of the runs feel rather flat, which means you have to carry as much momentum as possible to avoid pedaling on a lot of the trails. It’s resulted in some rather critical feedback from other park users looking for a pure gravity fed experience.

We found it acceptable on our DH bikes, though we avoided the more pedally trails when running the big travel bikes. 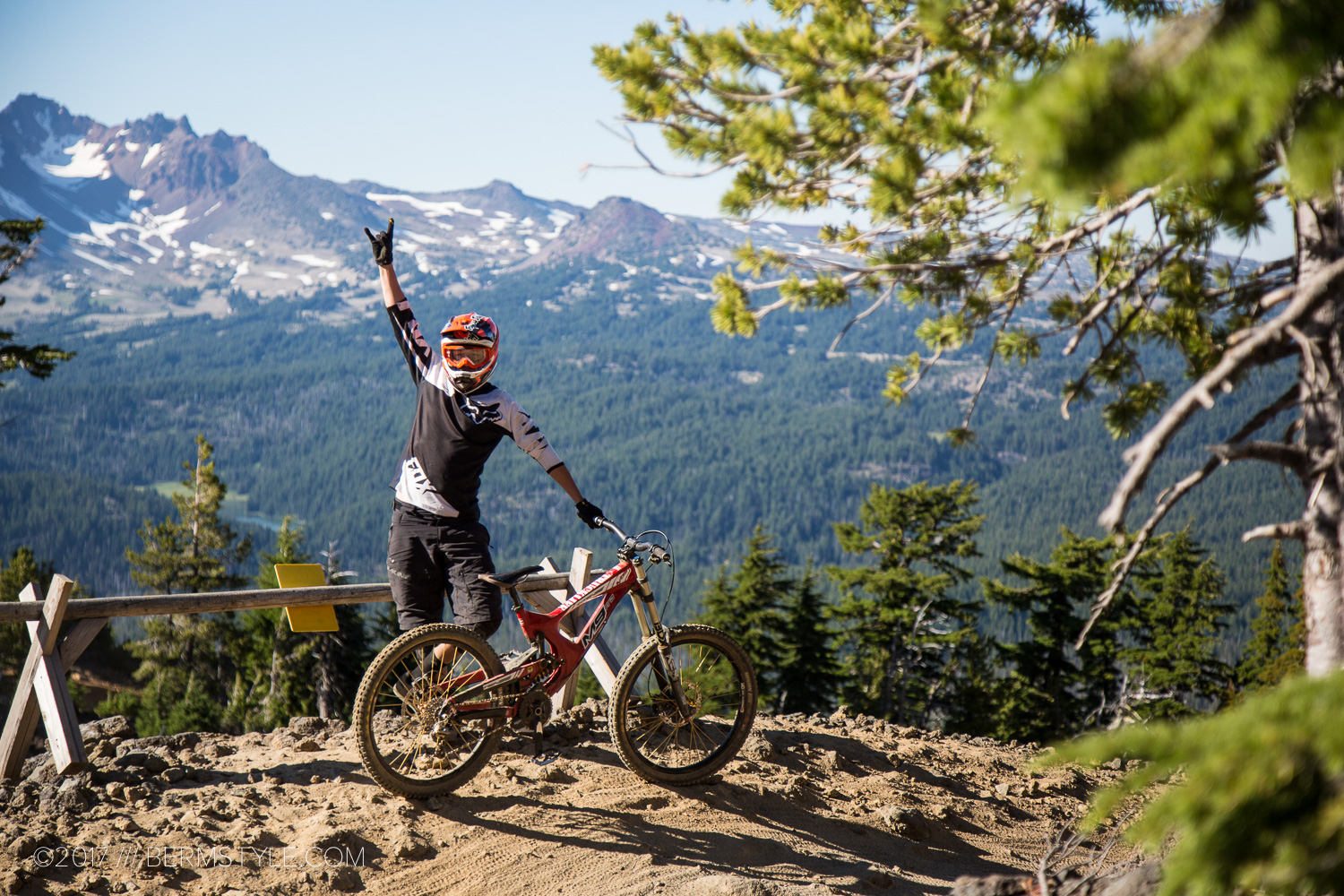 It was a blast getting to know the trails again on a full blown DH steed. Sections I would have wanted to stop and preview first on a trail bike didn’t faze me a bit on the DH sled. Blind drop? (there’s only one) Just point it, stay off the brakes and huck it. 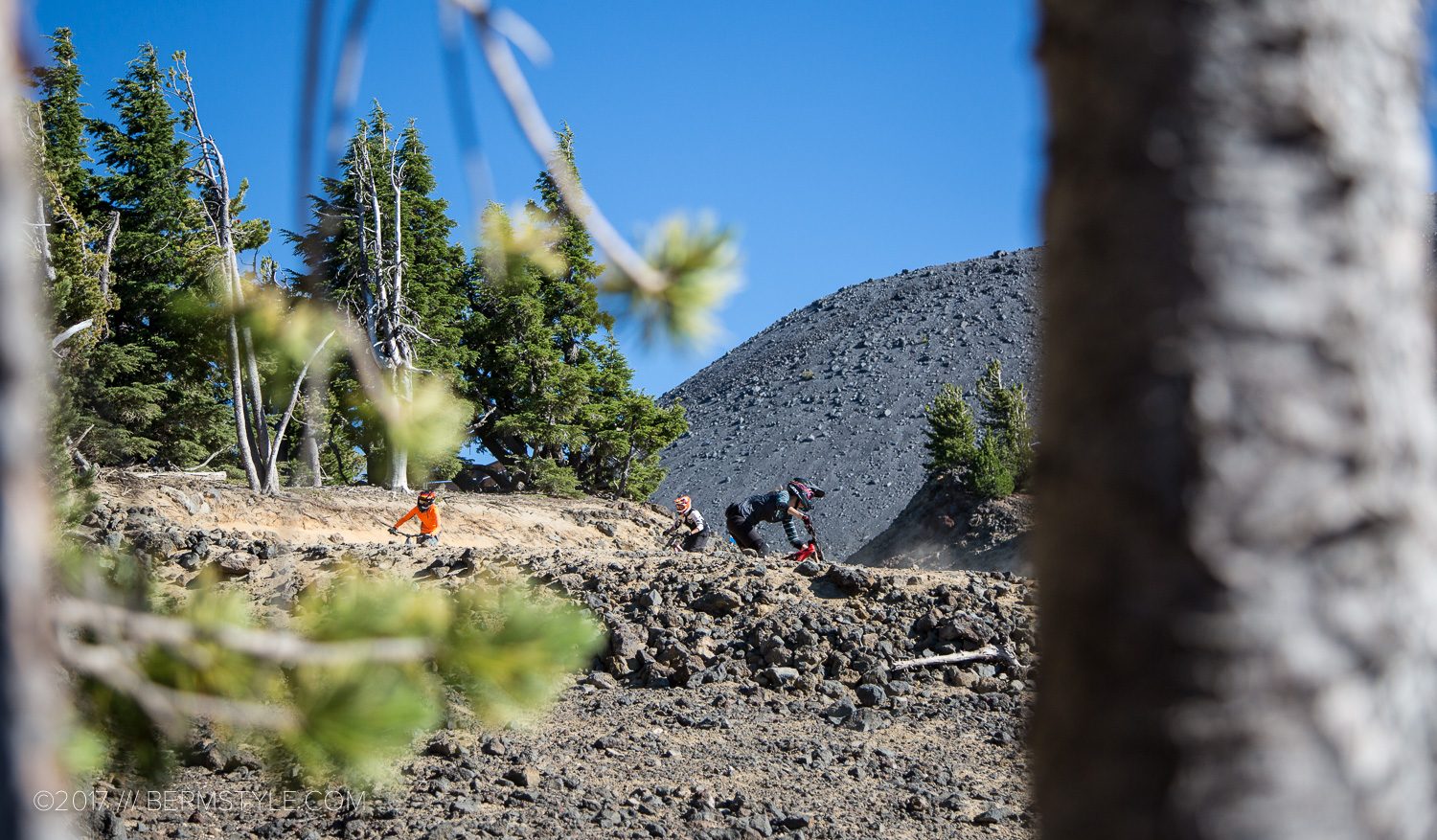 If you’re on a trail bike, heavier enduro style tires with thicker casings are recommended, as well as tubeless. I actually managed to pinch flat my rear tire, even with a DH casing. I seem to be having bad luck with flats this year… 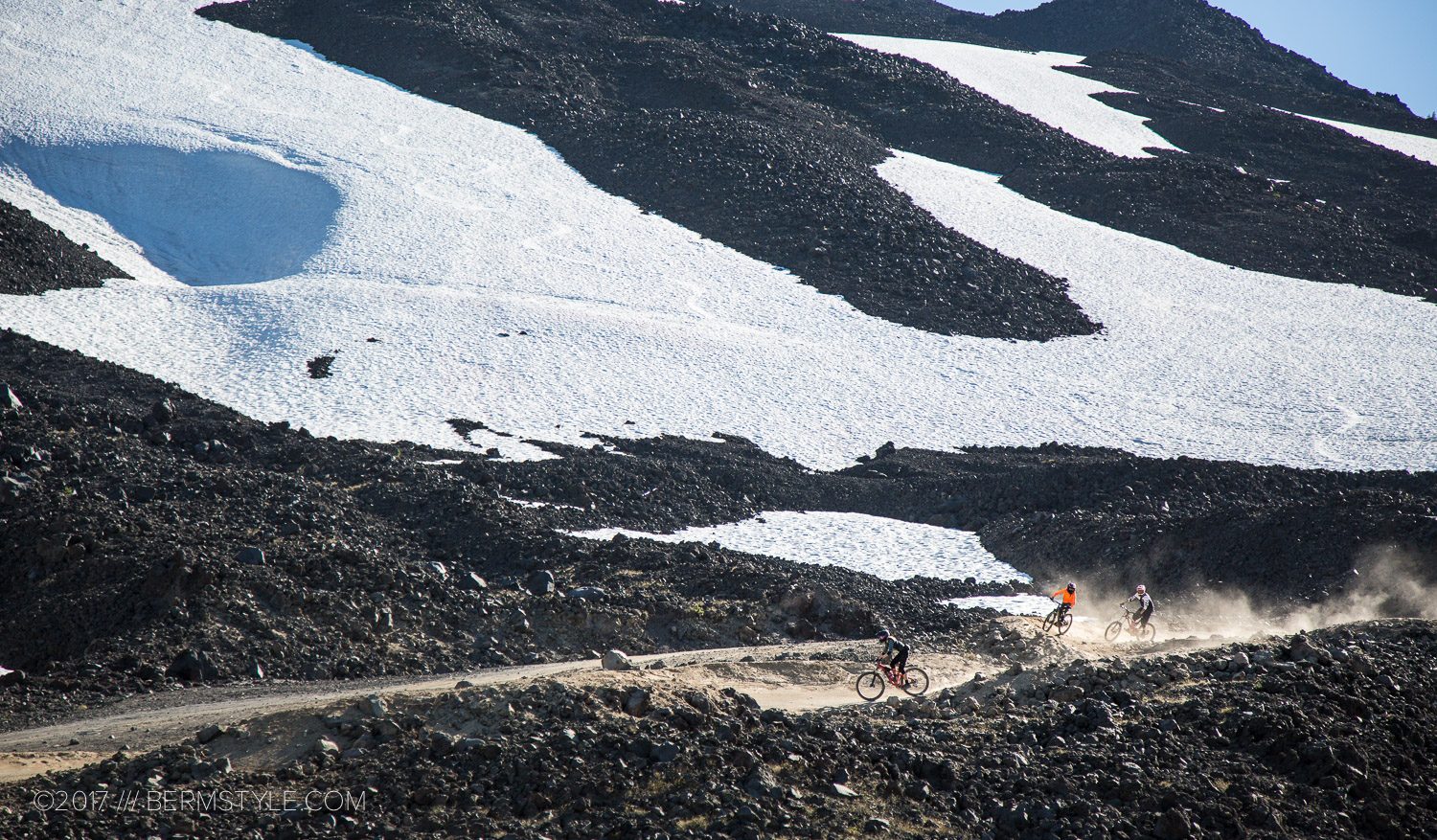