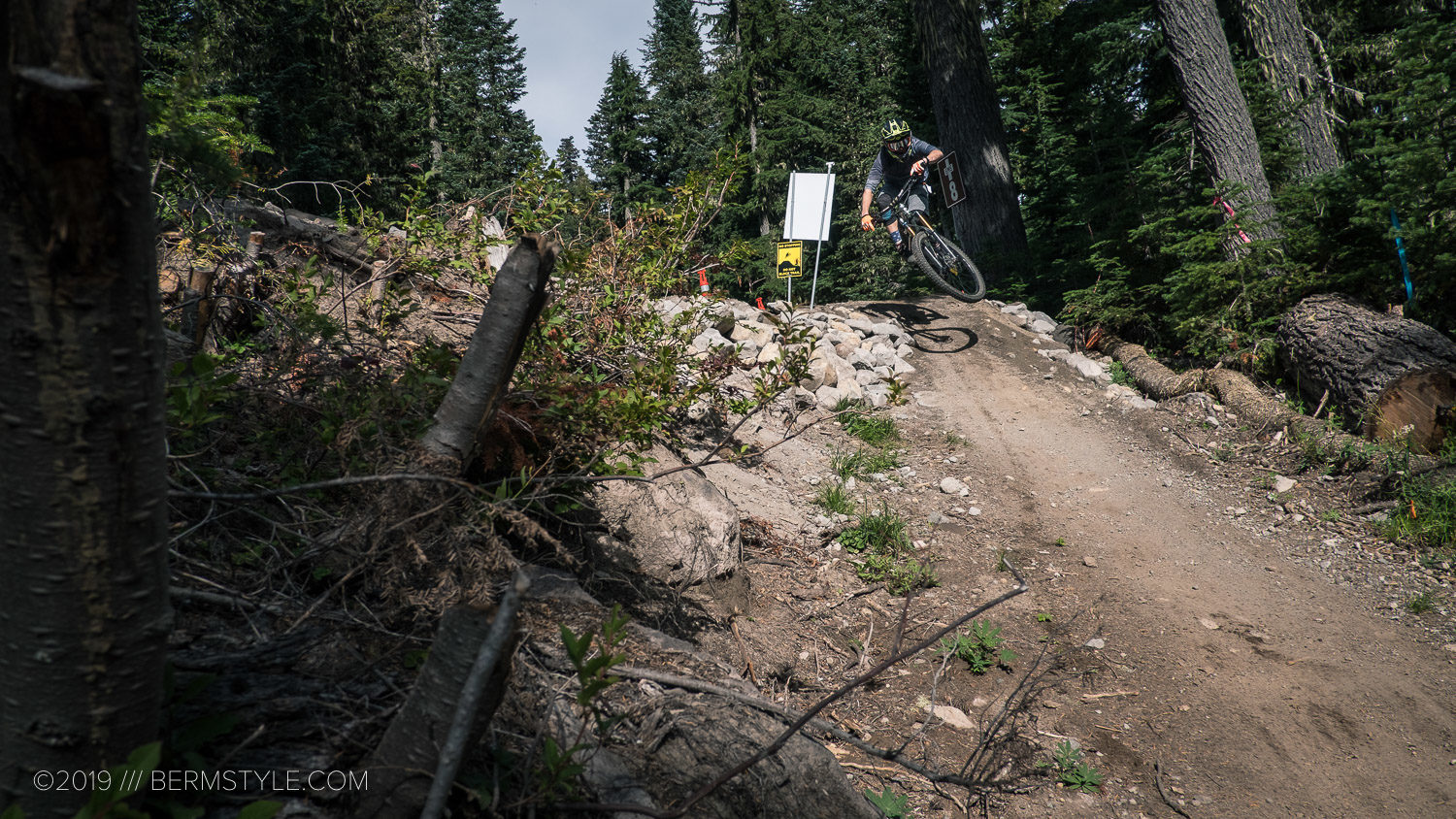 Spencer Burback shows some steeze as he scrubs a fadeaway roller on Brobi-Wan.

We returned to the Timberline Bike Park this weekend with a new mission: to ride each trail from top to bottom in order from Green to Black. Along the way we were curious to see how our initial impressions would change and to get a better sense of current park layout as a whole. Riding everything in order would also serve to get a sense of what could or might come next as phase two of the bike park build-out continues.

More importantly, we discovered we missed the best line in the park on our initial visit. 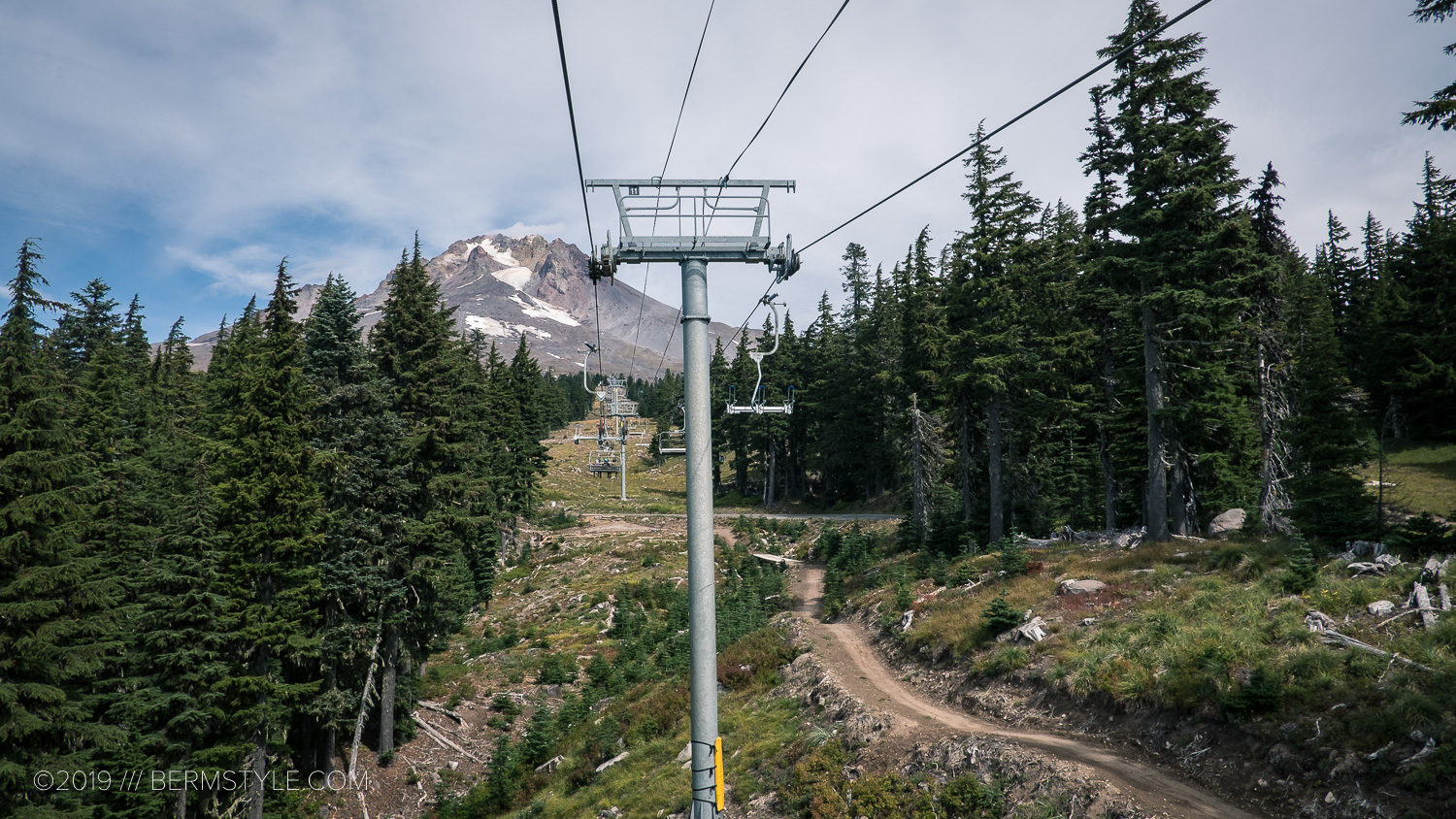 Re-Align, the trail seen from the chairlift, currently has the best flow on the hill.

During our first visit to the park we rode the blue trail “The Rock” once, and then spent the remainder of the day doing laps on Brobi-Wan and C.D.M. We missed out on Re-Align, a blue rated trail that currently features the best flow on the mountain. If you like sustained speeds and flow, you’ll love this trail, as it provides both. The undulating flow is extremely well-designed side to side; however, it would be nice if there were more grade reversals and the rollers were a bit more closely spaced in order for advanced riders to take to the air. A “black diamond” version of this trail running from top to bottom with well-spaced rollers would be the tipping point for a lot of riders to invest in season passes. 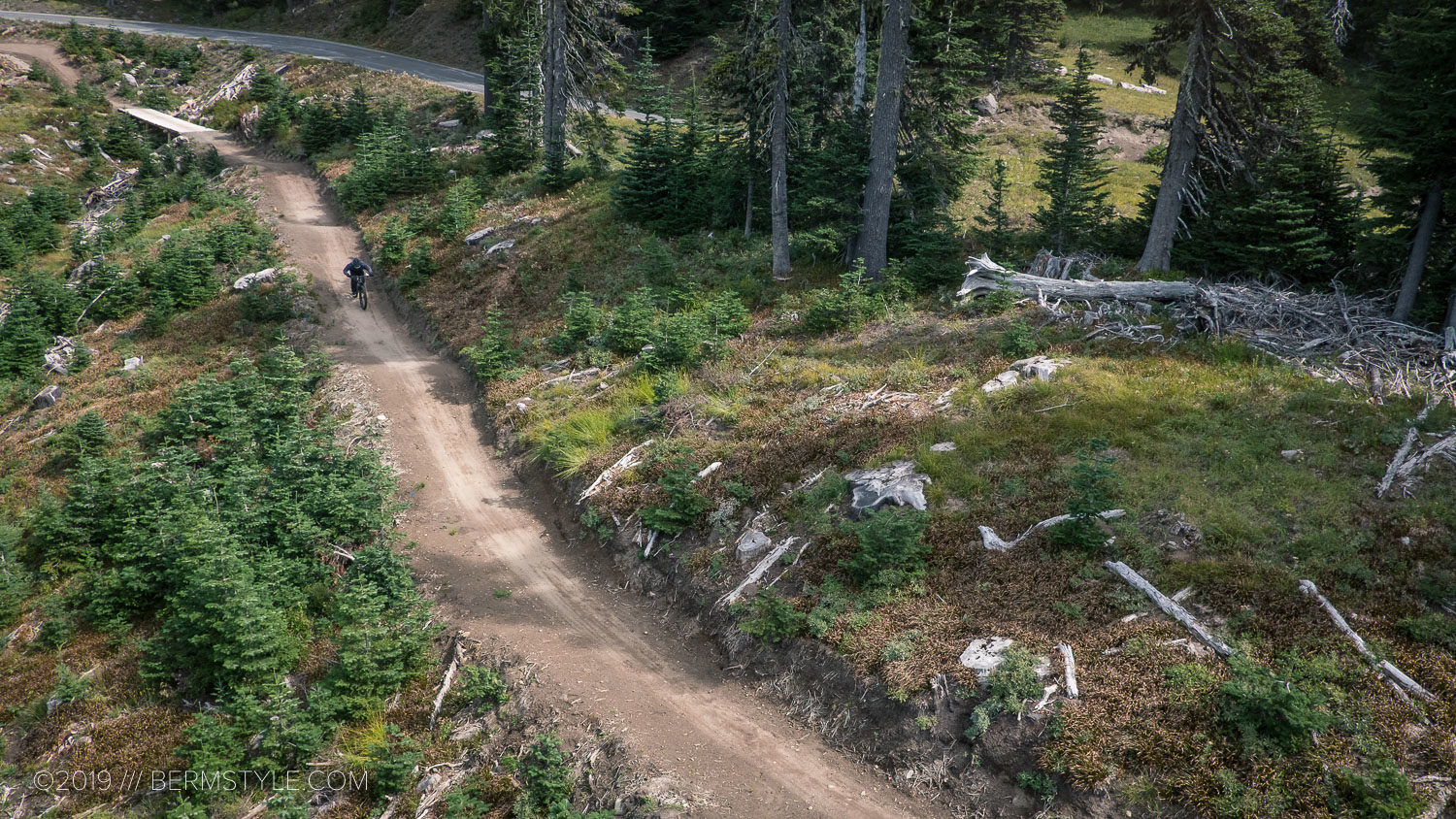 It’s a shame these undulating grade dips aren’t a tad bit closer together.

Now that the park has been open for over a month, the fresh trails have evolved, with thousands of tires making marks. We made sure to get an earlier start this visit to make sure we got in plenty of runs in, and starting with the green trails, we rode every trail on the hill, in order from “easy” to “advanced” to fully take in the overall Timberline experience. To make things even more interesting, we added a “no pedal, no brake” rule to get a better sense of the flow of the entire park.

This is a super fun experiment — we fully recommend trying it, as it allows you to experience the trails in a whole new way. Not pedaling means you need to focus on maximizing momentum through riding technique. This consists of pumping and really nailing those outside lines in order to maintain momentum for grade reversals. Staying off the brakes is a fun experiment as well, and is guaranteed to make you a better rider, as you’re forced to test the limits of your bike control, tires, and traction found in the turns. 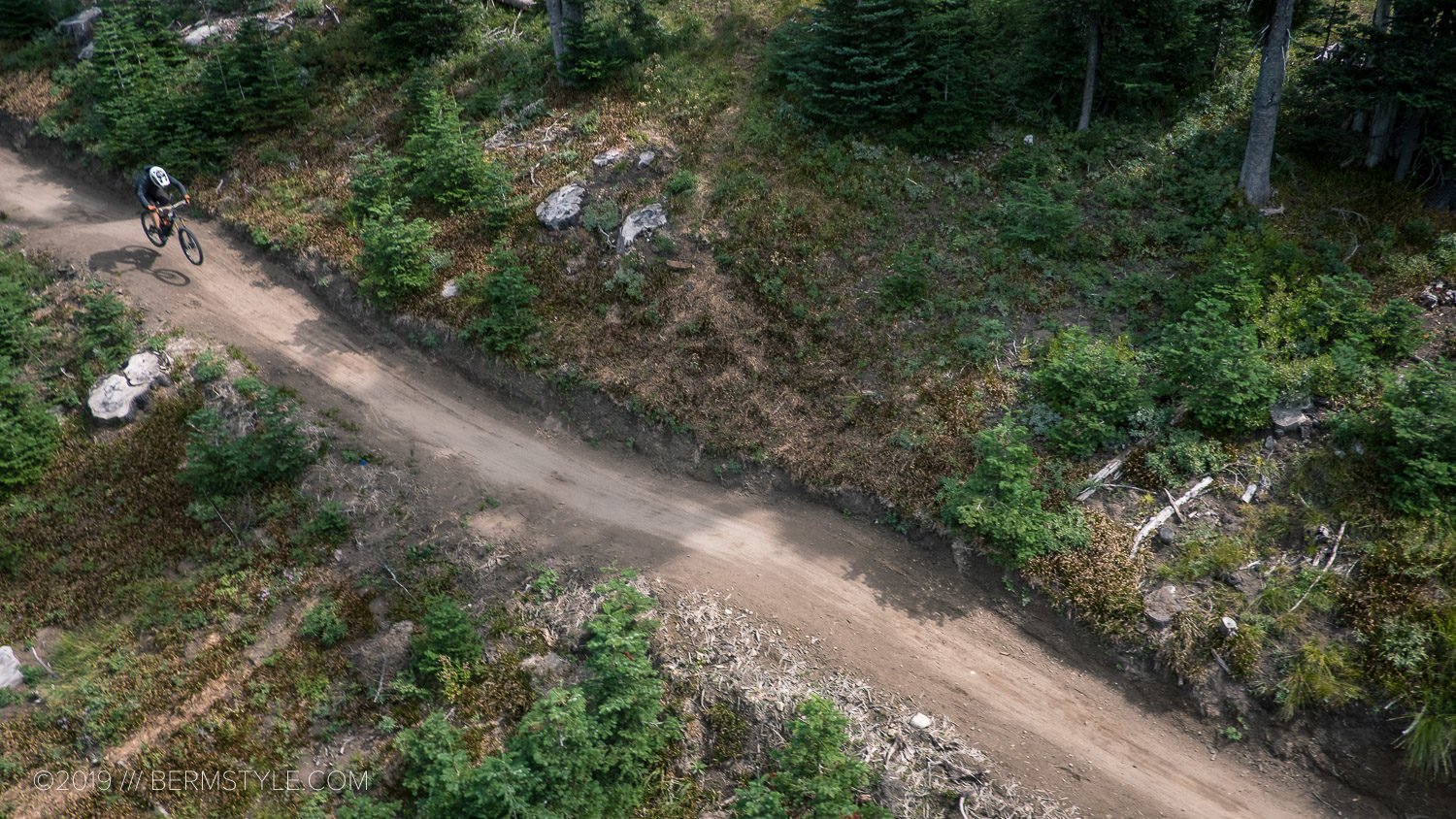 Our favorite section of the trail comes right after this straight as you enter back into the woods.

Patience is a virtue

Not pedaling also results in a more moderate pace; considering how popular the park is becoming, mellowing out is a good thing. The green trail Gravy Train currently serves as the main artery to access a number of other trails, which means traffic can back up quickly. With a lot of novice riders on the trail in front of you, a high amount of patience is can be required. Unfortunately, we also found that many of the novice riders are not yet familiar with the concept of trail etiquette, and even after numerous (very polite I may add) requests from our group, would often not move over to yield the trail to faster riders. This has the potential to brew into user conflict, so hopefully everyone can remember to stay polite, and the park implements a solution in the near future. One option would be signage; another could be a video similar to the “Welcome to the bike park” video the Lumberyard Bike Park has that new riders are requred to watch when they sign their release forms. Ideally though, the blue lines would have an option to be blue from top to bottom, and black lines would have skills filters (like the rock garden placed on C.D.M) in place.

During the day we were delighted to discover was how fast the trails were evolving, as the personality of the trails is changing quickly. Brobi-Wan has now has braking bumps on the steeper sections, and at speed the technical factor has gone up considerably. 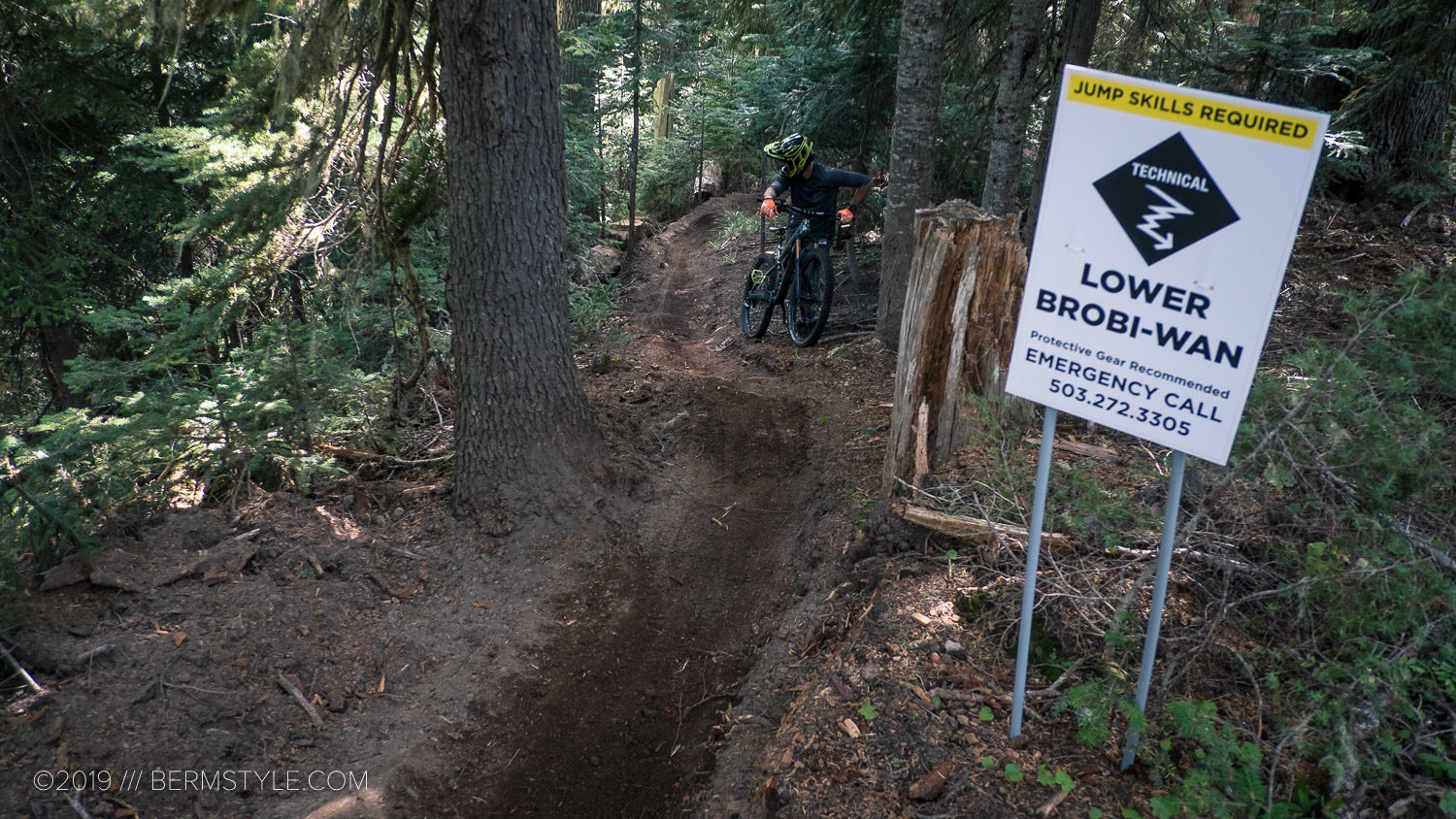 Brobi-Wan just keeps getting better with each run.

We overheard some riders complain that it “wasn’t fun anymore”. We all have our own opinions in that regard, as we thought it was the exact opposite — we were loving it. Not only has the trail gotten faster, but is starting to feel like a legitimate downhill/enduro track, which is the type of experience travel to seek.

There is a potential downside: as hard braking from users creates channelization of the tread, at some point build crews may stop developing new trails in order to repair and reinforce the tread of existing trails. The most common solution utilized in bike parks is to install cinderblocks in braking areas to harden the trail surface. Ideally, riders would limit how often they lock their brakes to minimize their impact on the trails, but we all know that’s not going to happen, so its just a matter of time before we see tread hardening.

In the meantime, it’s fun to experience a trail in various stages of its evolution, and if you like to geek out on that stuff, you’ll get to see it happening first hand.

Methodically checking every trail off the hill also resulted in the discovery of a few lines we had somehow overlooked on our first visit — which turned out to be some of the best riding on the mountain.

I recall riding by the top section of Brodiwan, as seen from the exit trail “Gotta Go”. We didn’t actually ride it until near the end of the day and this section was money, easily one of the more fun bits. It’s ridden far less as you have to look for it and it’s pretty sweet. Not only is it a bit techier than the lower parts, it felt way faster. There were even a few hits resulting in some hang time, and as there currently isn’t a lot of opportunities to leave the ground, it was notable.

Crowd sizes has gone up. The word it out! We saw a ton of people out on the hill. If you haven’t already read our first post on the park, check it out here, as well as our video.

<UPDATE> I recently discovered the 2019 Timberline Master Plan, which has a section discussing the “Mountain Bike Trails and Skills Park”.  Of note are the descriptions of the intended park user experience:

“The purpose of the project is to develop a high-quality mountain bike park that would appeal to families and feature predominantly beginner and intermediate level trails for riders to learn and improve on.”

According to the plan, the remainder of the park is to be constructed over two additional summer phases. There is also mention of an upgrade plan expanding the Summit area, which could eventually lead to an expansion of the mountain bike trails network in the future. Also cool, is the map of what appears to be all the proposed trails. I found an additional map that includes the proposed ratings and placed it along side it. 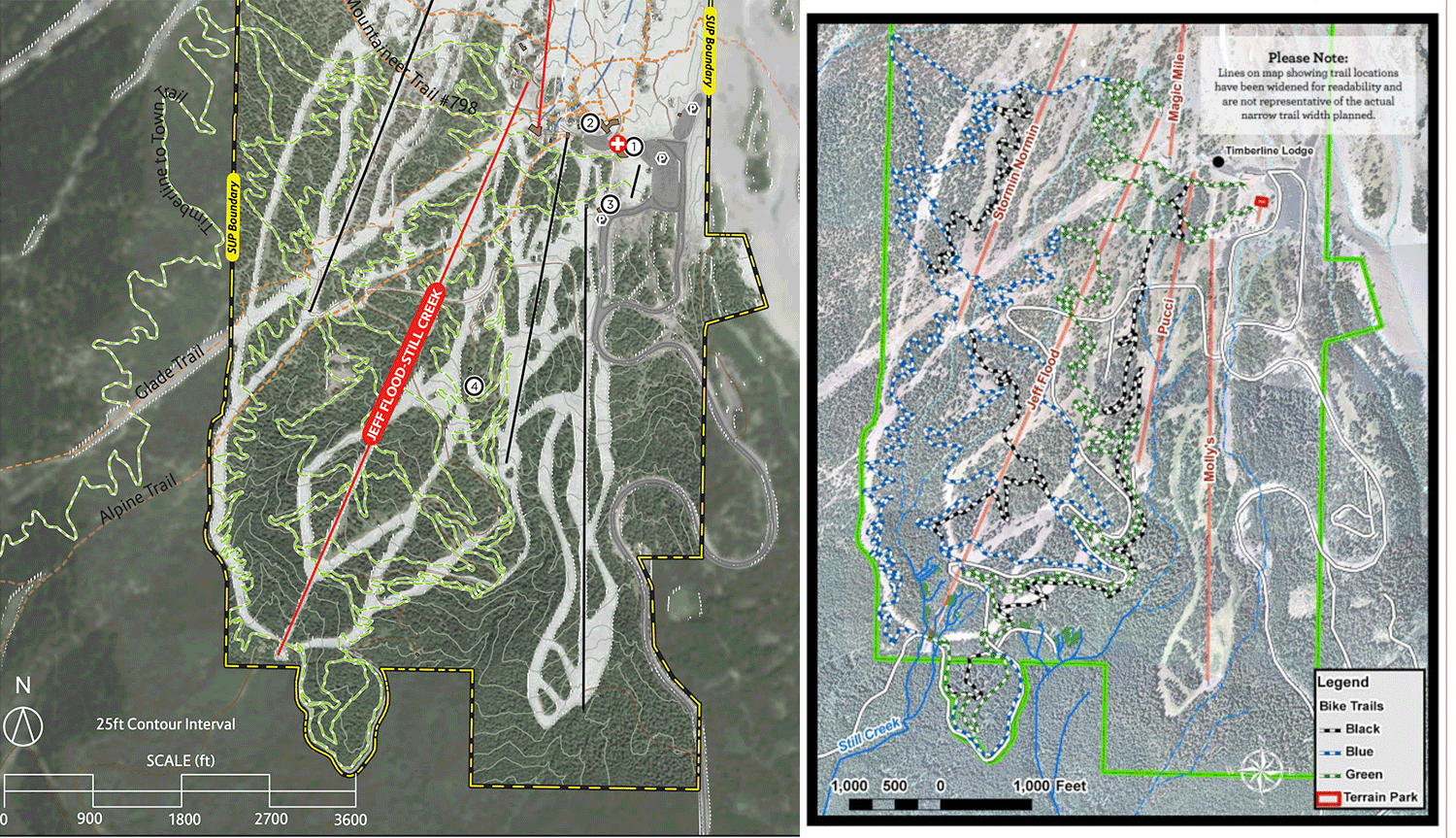