Gravity loving Santa Cruz fans have a new reason to put the hurt on their credit cards this upcoming season with the news of the full carbon V10c release. Having ridden the hell out of a carbon Nomad, I’m among the many that now believe in carbon, even for the aggressive riding and more frequent crashes that accompany pushing the envelope on challenging terrain. My last full-blown alloy DH bike had dings in the downtube from rocks spit up from the front wheel. While it is still a concern on a carbon steed, the beauty of building a frame with carbon means the frame designer has the option to allocate more material in areas prone to damage. Unlike alloy frames, when a rock does damage a frame, it is often repairable. I have a riding buddy that built up a Nomad C this season that has a hole in in downtube where a rock pierced it. A bit of epoxy later, and he’s still riding it. Bottom line: carbon bikes built right are tough as hell. And can be engineered to weigh very little while being very strong.

Enough with our experiences with carbon, check out these specs: 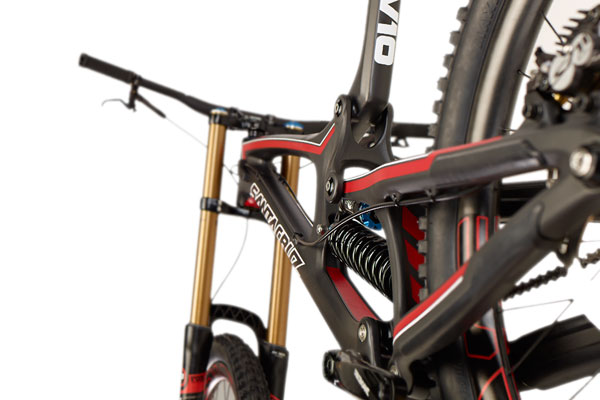 One of the things we like most about Santa Cruz Bikes (having drank the kool-aid, our living room is the home to several SC bikes to the point it looks like a showroom) is how the rear dropouts and derailleur hangers are consistant from frame to frame. Our quiver is already looking a bit dated due to the 2013 change across the board to the 142 rear axles. (Our bikes are the 135mm QR versions) The rear of the V10c appears to have a similar looking axle, with the change to a new 157mm rear axle spacing. 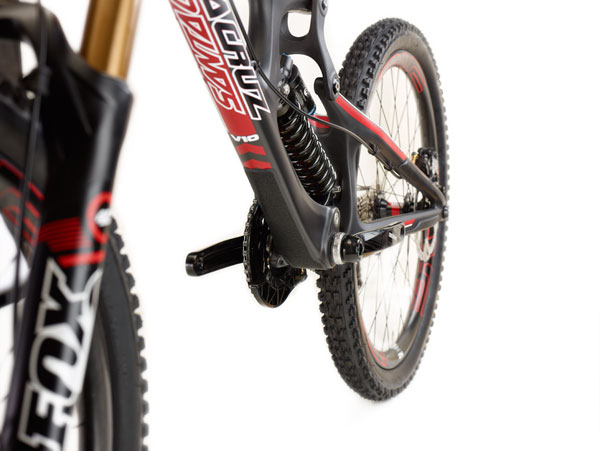 A down tube protector can also be seen near the bottom bracket.

Already adopted by a few other manufacturers on their DH steeds, upgrading most existing wheels with the additional 7mm of spacing over the previous 150mm spacing should be as easy as ordering a conversion kit. The newest standard for rear axle spacing offers a set of “channels” for the hub to sit within the frame, making rear wheel installation go more quickly and possibly boosting stiffness.

A sub 7lb. DH frame. (damn!) Riders were already getting sub 35lb. race setups with the alloy rear end, which was already impressive. A few years back I had the chance to follow Santa Cruz pro rider Greg Minnar down the Livewire jump trail at Northstar. Although we were rolling relatively slow behind other slower paced riders, he had no problem boosting jumps and getting completely sideways on jumps I had to pump like crazy just to clear. 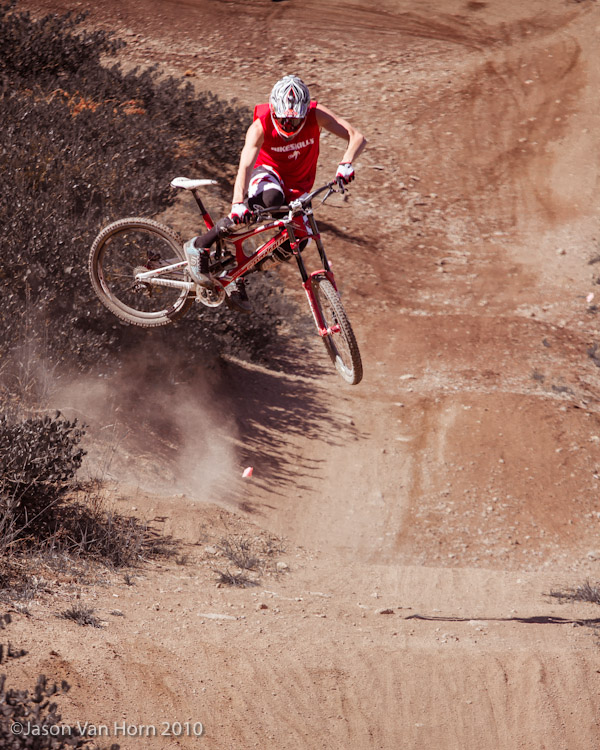 Greg Minaar whips his V10 on the Livewire trail at Northstar, fall 2010

The only drawback? It’s not going to be cheap. Frame and Fox DHX rear shock list at $3499, with pimped out completes running as much as $10k. It’s available in a Matte Carbon Green/ Gray and Matte Carbon Red/White.

Check it out at Santa Cruz Bikes