After our job in Payson, Arizona, the two Trail Care Crews traveled to Carlsbad, New Mexico. On the way south we stopped in Tucson to ride with some friends.

The original plan was to ride the 50 Year Trail, but somehow the plan was changed to riding a trail (that was open to motorized as well as bikes) that led to a waterfall.

The waterfall was a cool point of interest, and I enjoyed the rocky double track descents, but after riding a badass trail like the Black Canyon Trail, the lack of flowy single track was a bummer. The gnar rocks did prove how capable our Fisher Roscoe bikes were- I should have crashed a few times, but managed to keep upright on some burly sections at speed.

Collins Bishop poses in front of a waterfall. Gorgeous!

Since we were going to part ways after our job in Carlsbad, while the girls were on a phone conference, Collins and I did an impromtu photo shoot of the cars.

Our Outbacks have been rad in the snow, sand or desert- everything we come across.

It’s true, we’re fond of our Subaru Outbacks. Driving anything else (ie, rental cars) has been a disappointment. At this point, we are straight-up spoiled.

After we enjoyed our first week of downtime since we started life on the road, we made our way to New Mexico to Carlsbad, where the IMBA visit had been requested by the BLM.

After touring the local trail systems, we located a few key problem areas.

A good example of a fall line section of trail.

We chose a section of fall line trail to work some magic. As we didn’t have clearance for any reroutes, we chose to armor this section of trail that had begun to fall apart, as it was not only fall line but over a grade the local soil could sustain. (which was more the issue as precipitation was not) Rock armoring is a technique in which you place rock to harden the tread surface in order to make a trail sustainable. Once we placed the rock, the section of trail would be able to handle and be resistant to user-based displacement of soil, as well as any possible water-based erosion.

The first step is to gather the appropriate rocks. It’s a toss up in this case which was more work, gathering the rock, or putting it in the ground. Since Collins and I were the ones doing the actual carrying of said rock, I’m going to go with this part. Finding the right rocks is key though, and the ladies did an excellent job locating good materials. Ideally we would have a rock sling for toting rocks. The Gateway Off-Road Cyclist have a great PDF on how to build one, which they call the Spartacus.

There was a good amount of rock available in the area, so we went with the method of armoring known as flagstone paving.

Step two: put your rock in the hole

Step three: Pack the rock in with a fill the gaps with small rocks, stone dust, gravel or sand

and that's the way we do it! Steve from the BLM views the finished project

This short section of hardened trail took all day to finish, but will be ridable for years to come.

The next day after the Trail Building School we headed back out into the field to demo the finished armor job and to take on two other sections. 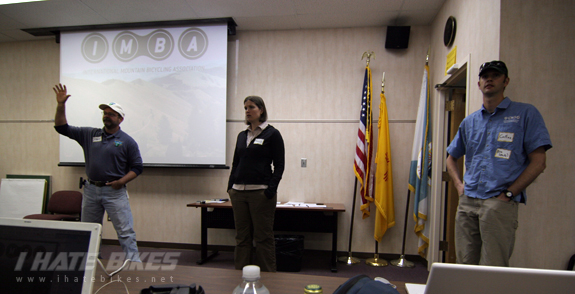 After the usual tool and safety talk, we headed out with our crews to our respective project. Collins led a group to build a reroute and reclaim (with a short armored section), while Inga and Kelly taught trail design and inclinometer use. I took a crew and we armored an additional switchback section.

It was a good weekend for all involved, and our last weekend of traveling with Kelly and Collins.