Kelowna was our first stop of three for our Subaru/ IMBA TCC tour of Canada, and our first taste of some real BC single track. We learned an important lesson on our drive east from Vancouver; when you see a gas station and you don’t know where the next one is, always stop and top off the tank! Thankfully we made it into West Bank coasting in on fumes, and after fueling up we met up with our host, Mike Kittmer of MTBco.

MTBco is a new club for the Central Okanagan area that picked up from where the former Kelowna Mountain Bike Club left off. With a new strong brand, and a solid and active core group of volunteers, they picked up and hit the ground running, becoming a major force for advocacy in the area. They have been busy too- besides planning for our visit, the club did a group trip to Whistler just the weekend before. They are also promoting a race for next weekend, as well as a video premier of the new Kranked film.  Not only that, they are getting close to putting their first bike park in the ground. Kelowna has a huge mountain bike scene, and it shows. 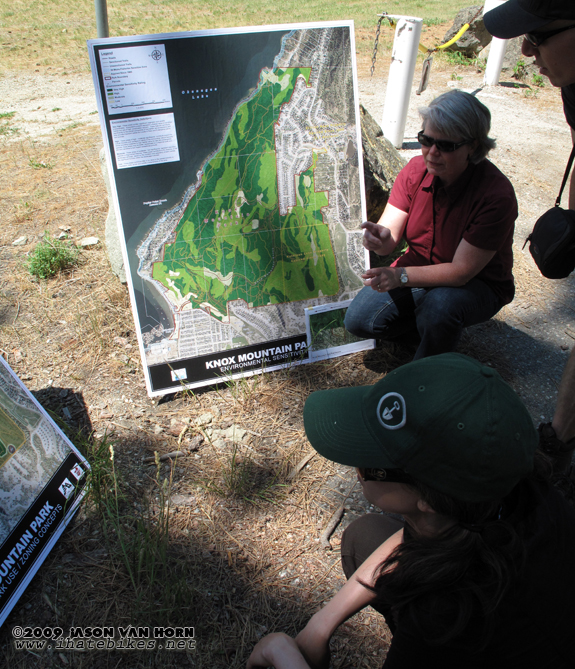 Viewing maps of Knox Park in Kelowna, BC

For our TCC weekend, we began with a meeting with Kelowna area land managers, and gave our land manager presentation. The most exciting thing about the meeting was that not only were the local area land managers engaged, but a number of them are already mountain bikers.

The next morning we headed out to the site to set up our field project at Knox Park. Knox Park is a great resource for local hikers and bikers. Not only is it easily accessible, but the network of loops offer enough mileage for afterwork and training rides, and provides a great view of the area. The park is only partially mapped though, and littered with social trails heading straight up the hill. MTBco is working on a bike plan for the park, and that is where we came in. 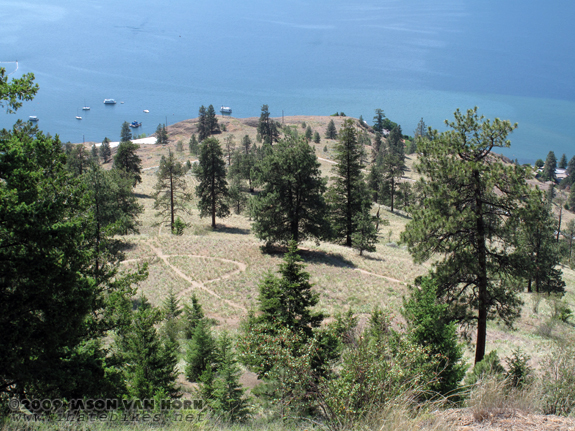 The original plan was to improve or realign a trail heavily used downhill trail. Unfortunately, upon viewing the topo maps, it was found that the area was zoned as hiking only. It was time to quickly shift some gears and come up with a back up plan for Saturday.

After viewing a number of sites, including a previous trail project, we found an area that would be great for our project. Our goal was to reroute an overgrade section of trail. We would begin a new route with the goal of building a text book rolling contour trail, and rehab the old trail. The trail we were working on was an intermediate level trail, with some sections that were at and over a 20% grade. Due to the low precipitation and the dry, sandy soil, it was clear that while the trail was currently low use, after the bike plan and new signage was implemented, it would not be able to sustain the higher amounts of traffic. It was an unpleasantly steep and long climb. 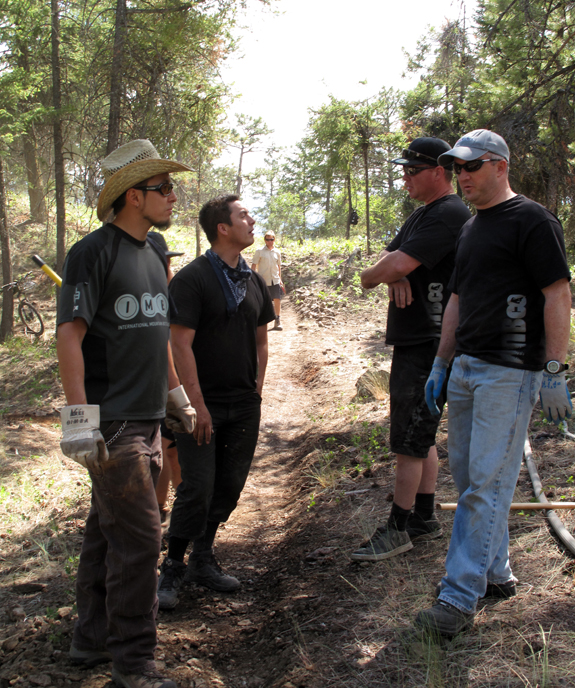 Discussing our strategy for the entrance into our turn

Our plan was in place; on Saturday, after our in class presentation, (and after a great lunch generously provided by the Bicycle Café) we headed up and began our reroute. Before we began, we did a walk and talk of the area  and discussed the route we chose.  Not only was it more sustainable, and utilized the natural undulations of the terrain, but how it was scaled to be part of a bigger plan as well. We left a section of trail for Inga’s crew to finish designing. We were also fortunate to have a co-worker from IMBA Canada present, and after getting one of our crews set on the reclaiming of the old trail, Daniel stepped in as a crew leader for the reclaiming portion. 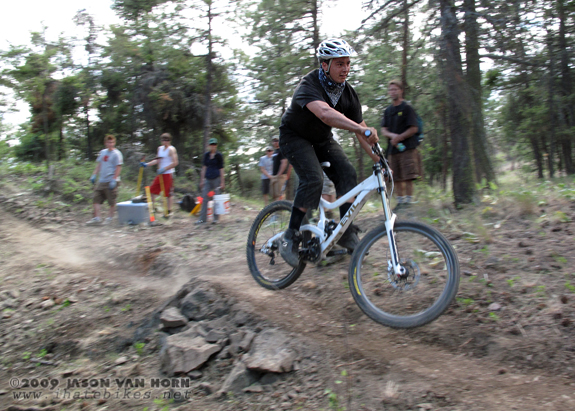 After the work session, a few riders tested the new trail to give feed back on the flow.

Tasting some BC single track

On Sunday we met the group at Smith Creek for a social ride. We talked about riding Knox Park, and then checking out the Gillard Trails, which was one of the areas with intermediate to advanced downhill trails. Somehow I got “DH” in my mind, and brought my Trek Session Freeride bike out. Whoops! It was the wrong bike for the ride, with a climb up of about 9.3k.  My Roscoe would have been a much better choice- I was in for some work. 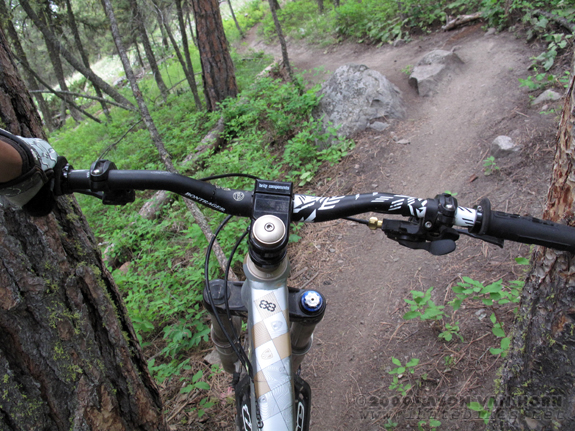 I’m thinking my bars aren’t going to quite fit here.

The trail was basically an out and back, but set up as a one way route, with a separate route to descend on.  The climb up was interesting though, and littered with TTFs, including some rock sections, ladders, extremely tight chokes, and a car. (huh?) 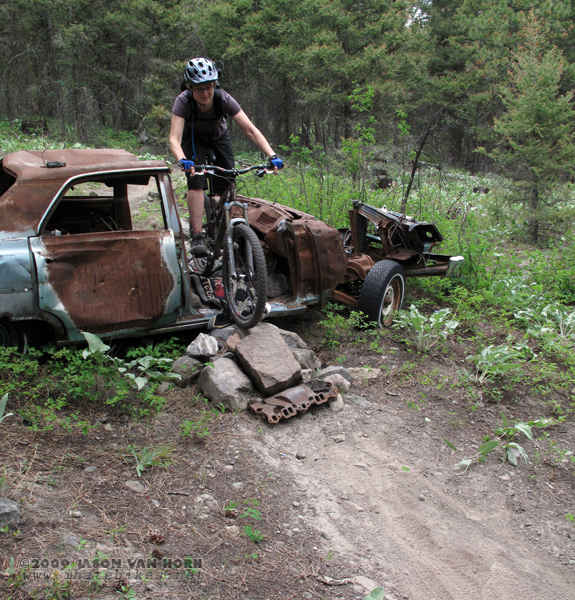 The most interesting use of an abondoned car we’ve seen in a while.

I obviously enjoyed the descent much more. 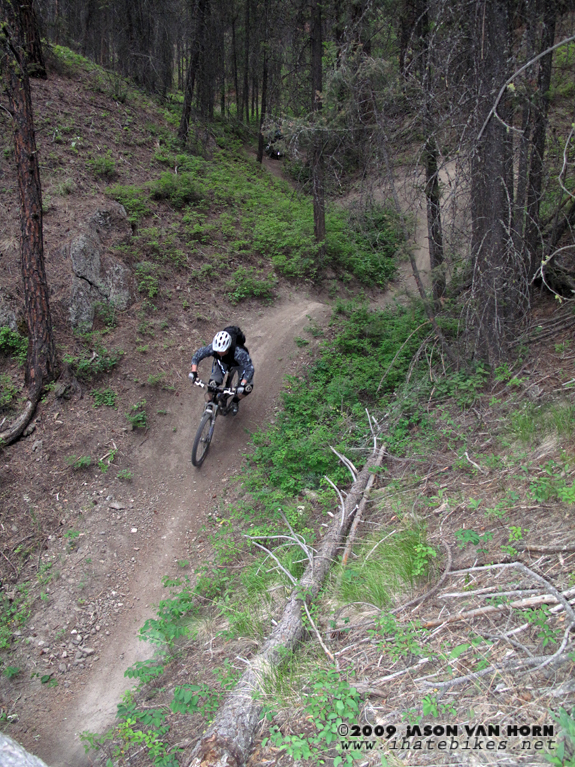 Stu enjoys opening it up on the downhill

As we regrouped at the bottom of the descent, Mike and I sessioned a step-down gap over the trail. Fun stuff. 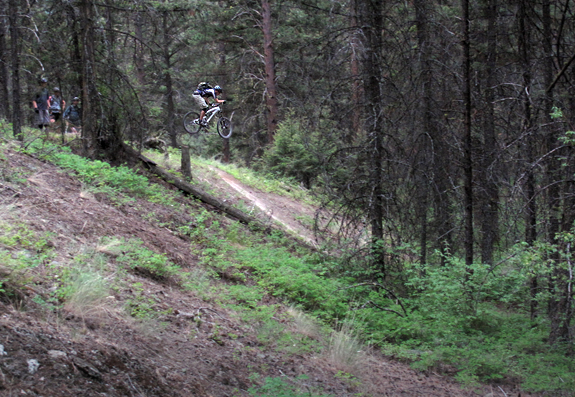 Mike sends it on the trail gap