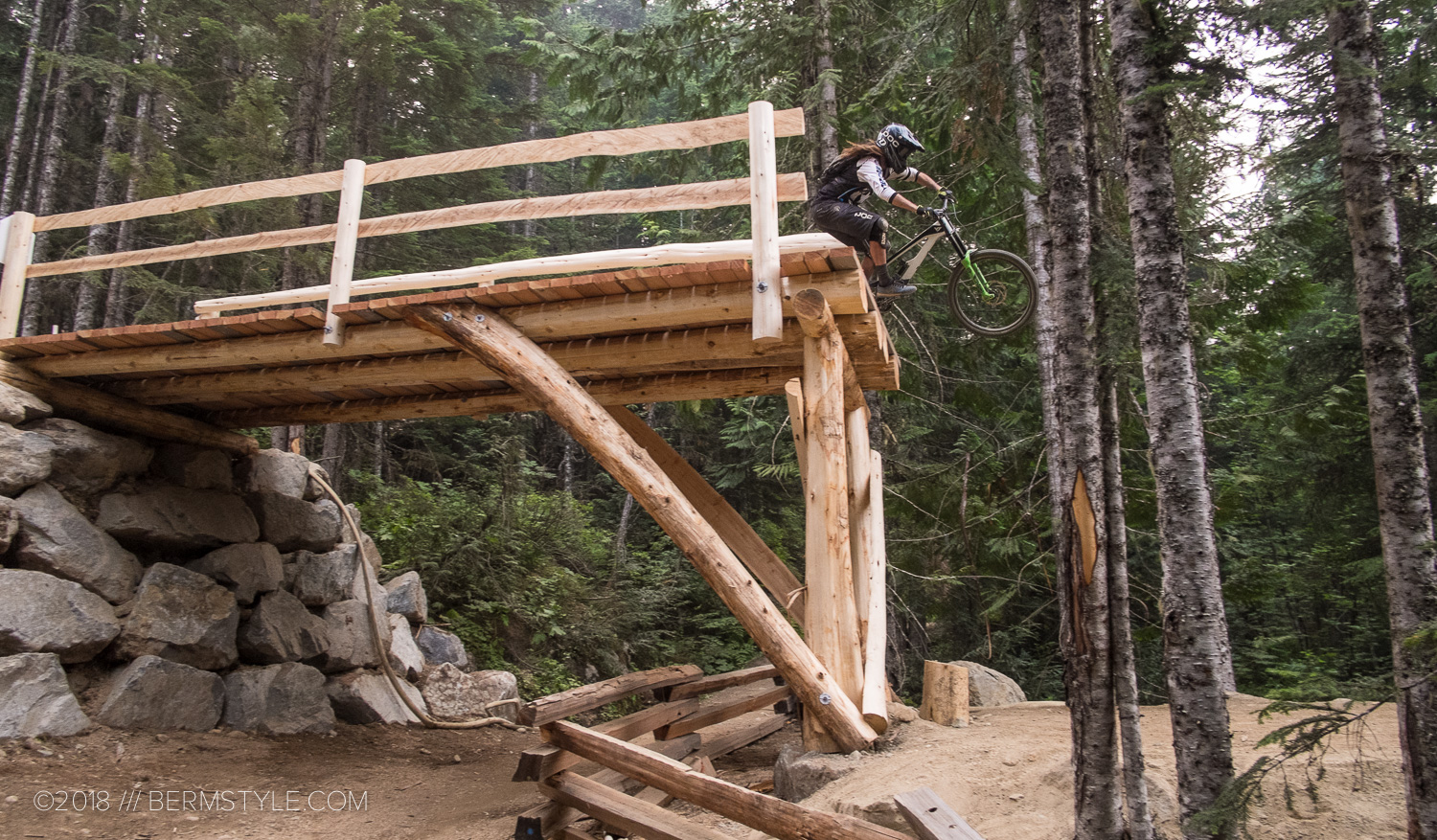 Ryan, AKA Ryno Radriguez of DVO Suspension leads the way down the revamped Dirt Merchant Jump Trail at the Whistler Bike Park.

Dirt Merchant is one of the most popular jump trails in existence. At the beginning of the 2018 riding season, the lower section was reworked, making it better than ever. This week Crankworx was in full effect, so heading to Whistler for the festivities, (after finishing the morning rounds) we met up with some riding pals to ride laps in the park. They were already mid-session, so for our first run we joined them for a turn down the new Dirt Merchant.

Upper Dirt Merchant had received a face lift the year before in the 2017 season. We had made it up for a visit to the park last year around this time, so it was already familiar. That trip started off far less ambitiously.

After a long break from owning or riding downhill bikes — much less riding high speed double black jump lines — we had worked our way through everything at a safe, albeit snails pace, to avoid getting broken off. After all, I had just gotten my first new downhill bike in years, and its prudent to take things cautiously when flying down bike park trails at a DH pace.

This year though, it was game on. 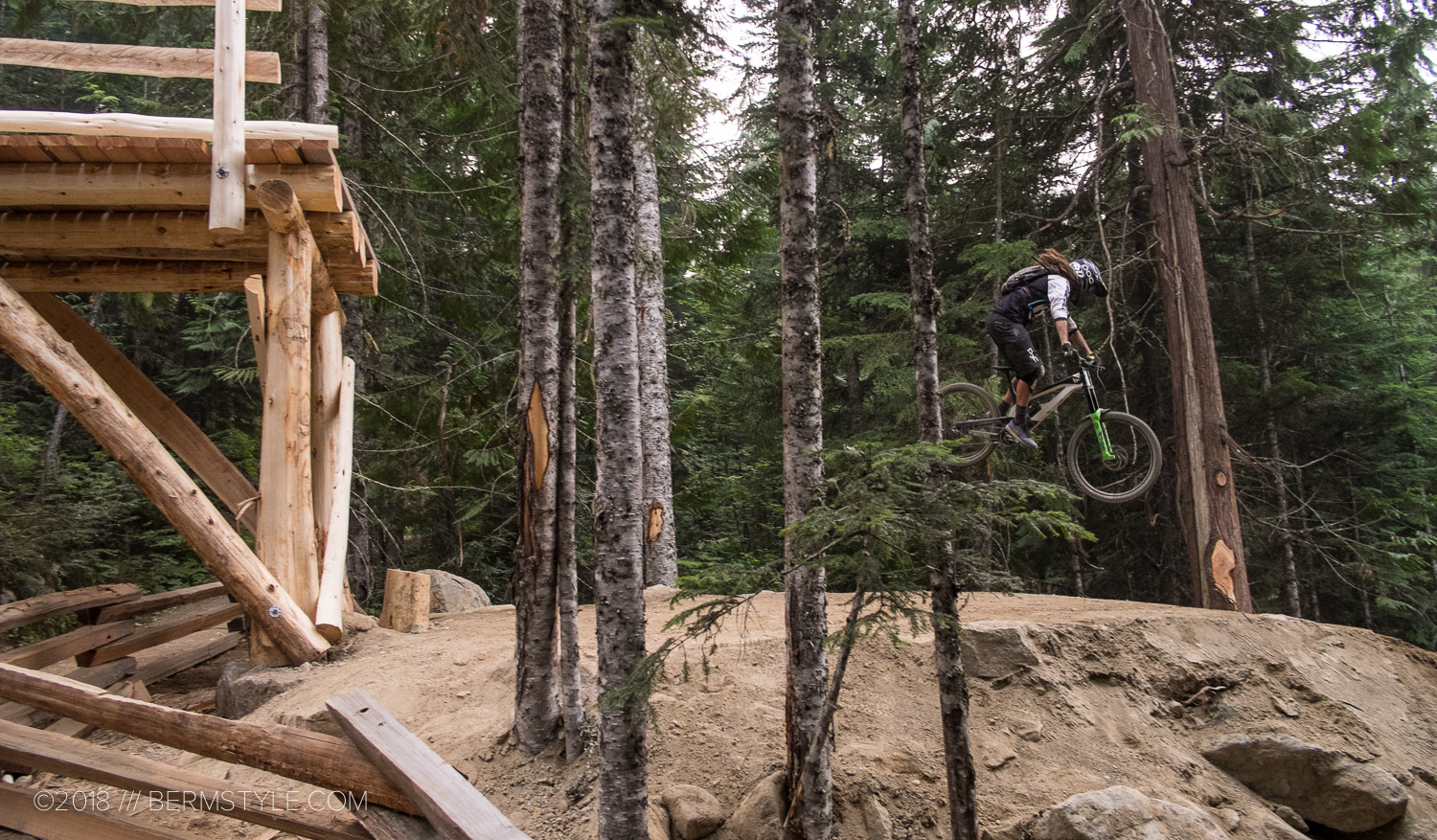 I don’t think any of us had any idea of how far out you soar when sending it off this feature.

It’s a special kind of day when your warm up run at Whistler is down Dirt Merchant and it goes as well as this day. Even more so when there are new features you’ve never even seen on video before.

That said, we weren’t coming in totally cold. The previous day was spent riding the Stevens Pass bike park in Washington, so we had already gotten our bike park legs, thanks to a photo session on the wood roller coaster to step up line the day before. We were ready to get rad, or rad-er at the very least. 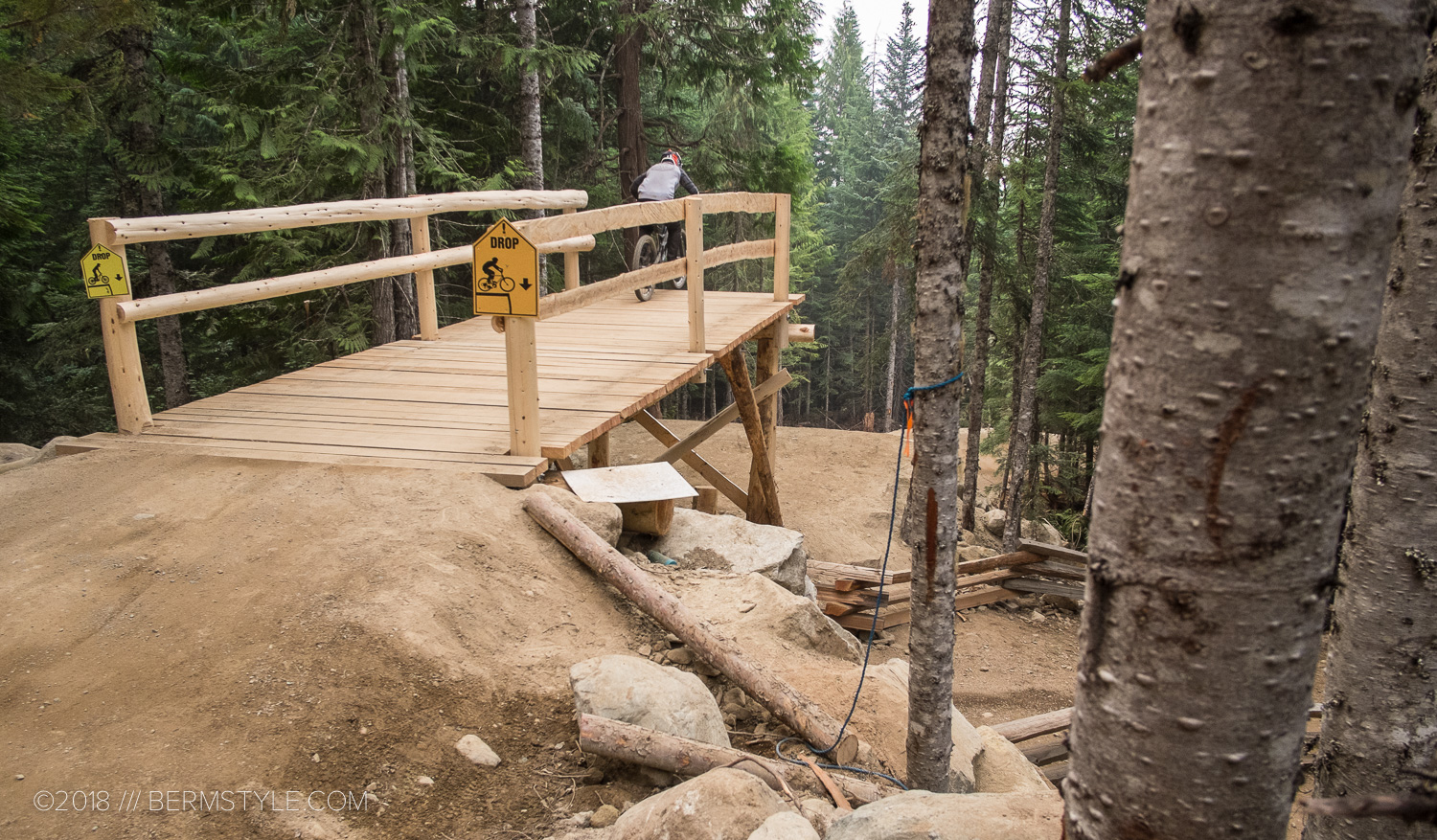 Bridge out below.. you better be committed if you going to come down Dirt Merchant. Proline rated is no joke.

Dirt Merchant has been up rated from a double black diamond to a red triangle Proline, and it’s no joke. You don’t ride trails like this unless you are already into hitting large jumps. But riding big new features blind? Truth be told, it may have been better that way. I jumped in behind Ryan and used him to gauge the pace, following him down the trail far enough back to get a full look at what I was about to encounter and experience.

Stopping for a moment, he filled me in on the new drop feature on the trail and we set off.

Riding onto the bridge at speed, I had no idea how high it was, what the landing looked like or how far you needed to go out to touch down safely. I may have feathered the brake slightly as I came onto the bridge… but then realized the scope of the drop. At the end of the platform, I loaded the suspension, and gave a small pump to have a clean, controlled send off into oblivion.

“Whoooooooo” is the closest I can remember of the sounds that came out of my mouth as I hurdled outwards and down. 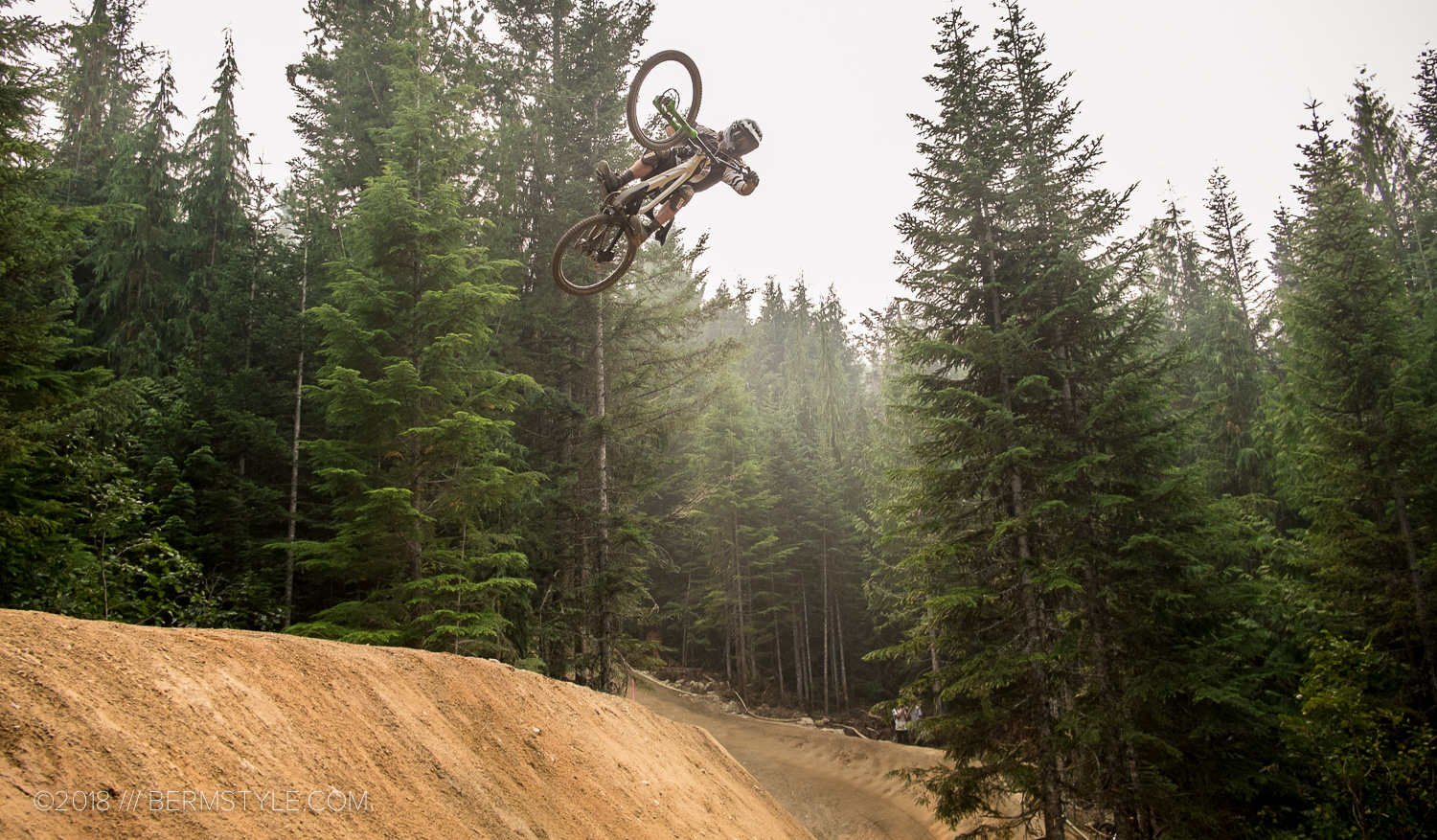 “F-yeah” may be the most apt, well, the easiest description of the updated trail.

Shortly after the big-ass bridge drop comes the other distinctive feature of the new Dirt Merchant: a massive sized hip jump. 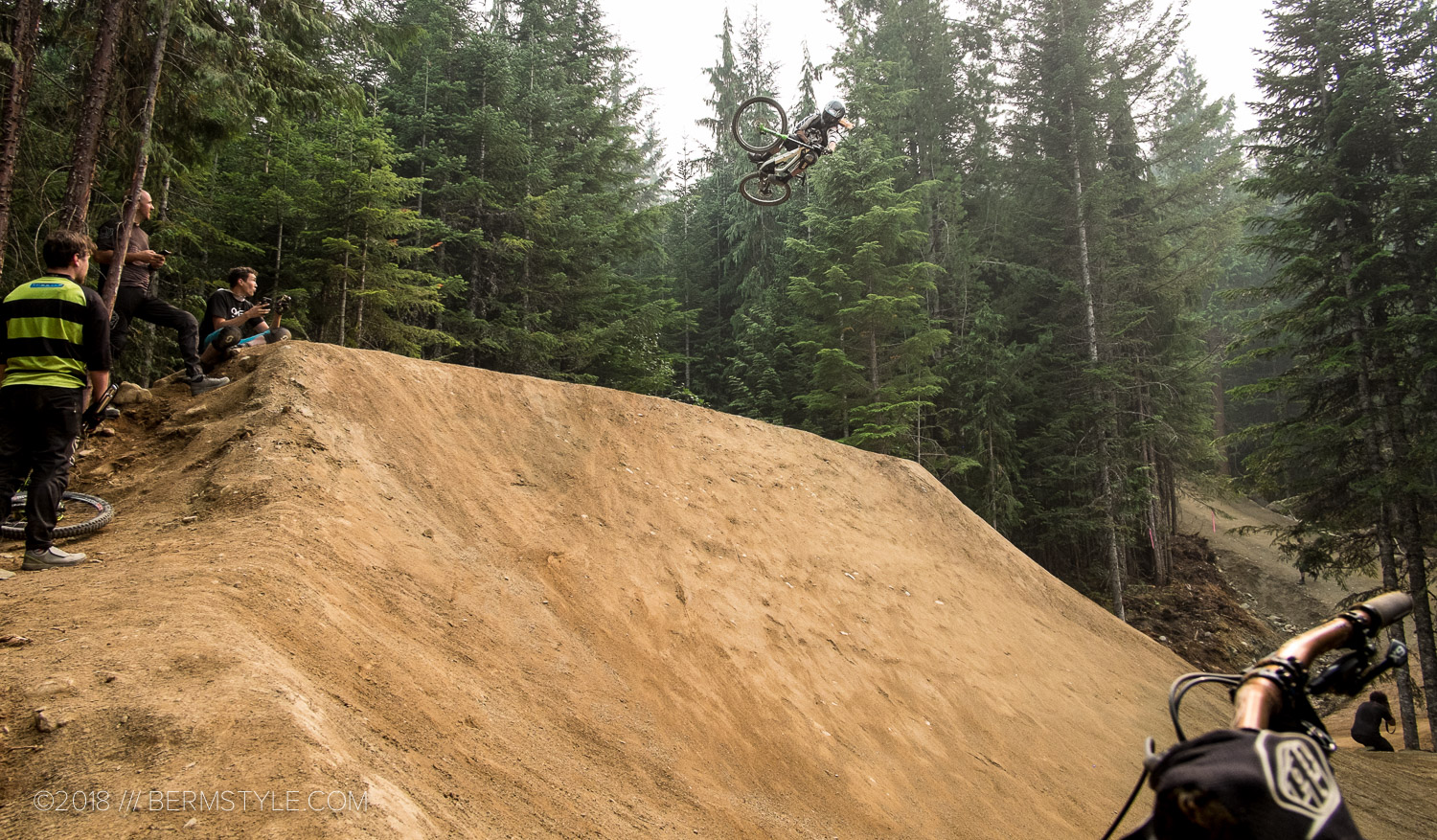 Ryan worked on clicking his tables, while I worked on finding the right angle to shoot it at.

The hip is a beast. It was easily the most popular zone on the trail, with a scene of riders hanging out at all times, and blasting it on repeat throughout the day. Ryan put in a legitimate session as seen here, as he worked on dialing in his inverts. 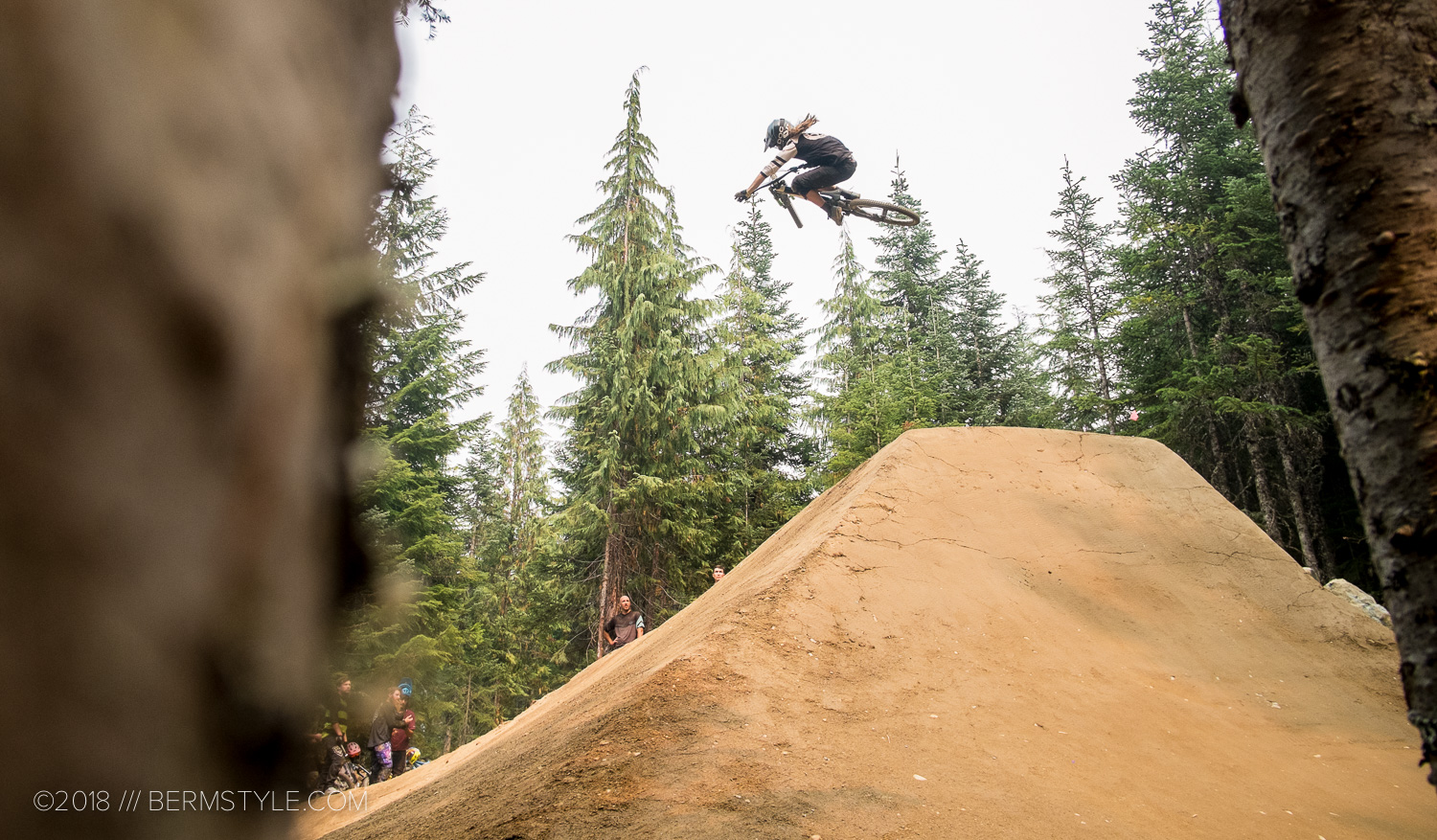 Searching for the right angle to capture this hip. Ryan getting rad.

Near the end of the day I hiked up to shoot these photos before taking a turn at pushing my bike up for another shot. Running down the road gap, sending it and pushing the turn after and into the hip, I finally managed to keep my fingers off of the brakes and aimed the front of my bike to the sky.

My hip skills are a bit too rusty though, as we don’t have anything adequately comparable locally to practice on, and this is where my day turned sour. Carving a bit too far to the left, I found myself over shooting my intended landing. Dropping like a rock towards the bottom of the transition, I found myself getting off balance, (freezing up is baaaad) slipping a pedal upon landing.

It’s a long way down, and I landed hard. In the process I lightly sprained my ankle, but it was enough to signal the close of my day.

But what a day. 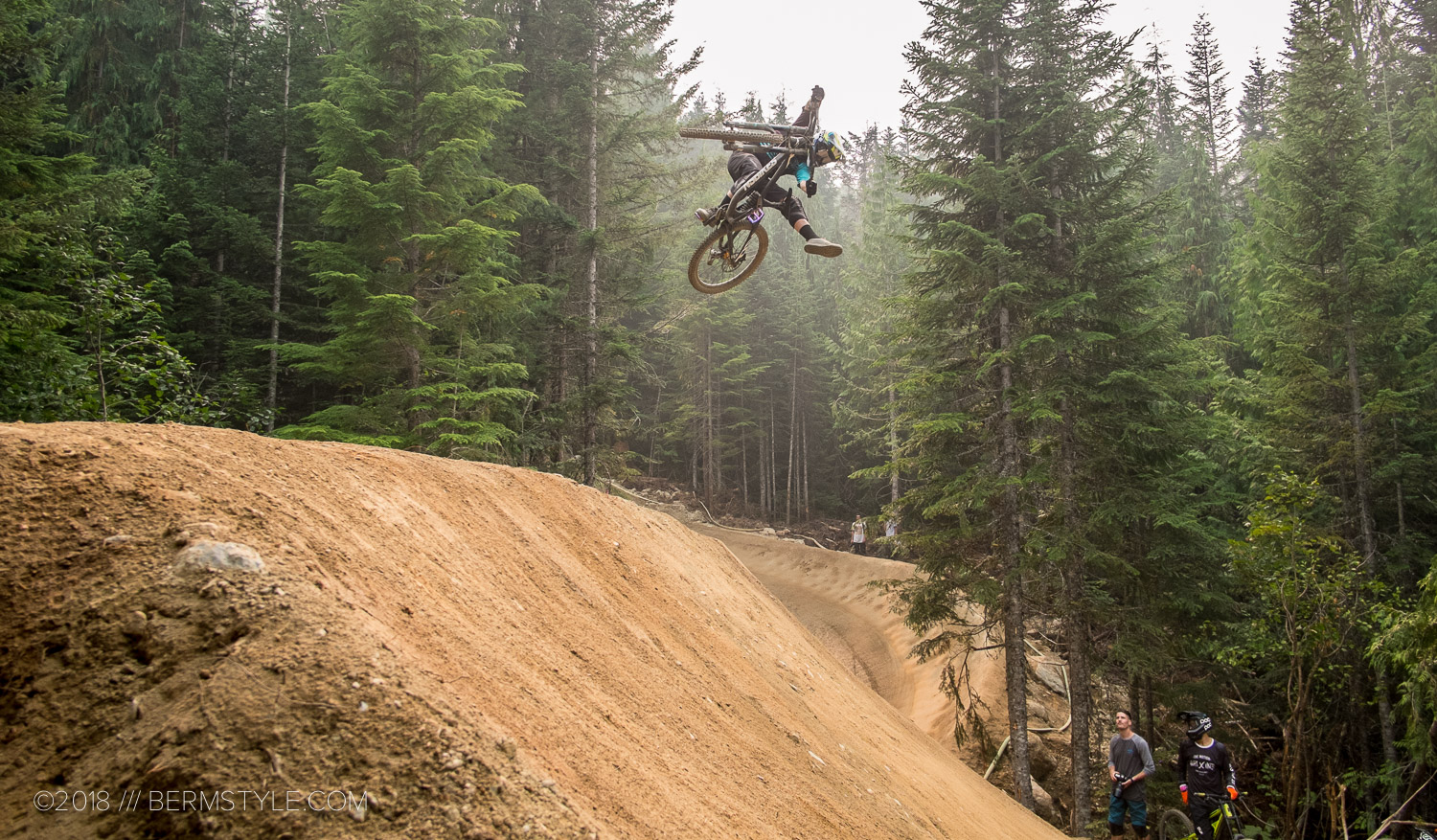 We didn’t just spend it on Dirt Merchant and A-line either.

Although the day’s mission was focused on sending it on the big jump lines in order to keep our hands functional, we also managed a run down the new Creekside Expansion to check out the new additions to the bike park. 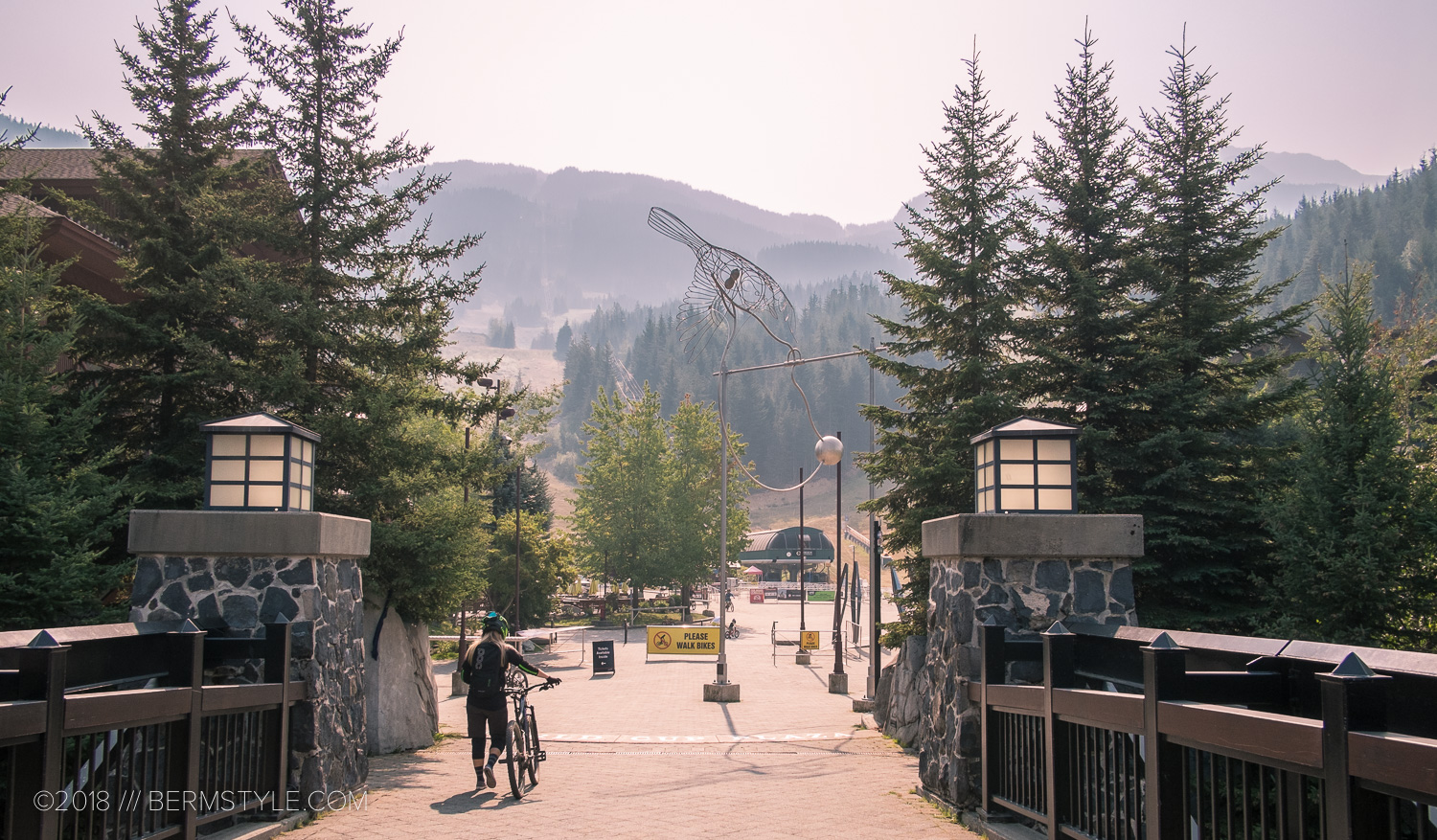 The entrance to the new Creekside Expansion at Whistler. No lift lines and free parking with a Starbucks and a market make this the best secret that has yet to get out.

We also made a stop at the legendary Crabapple Hits, home of the Whip-off.

These jumps are monstrous and to be quite honest, I’ve never felt the desire to even walk them… much less consider riding them. You have to need to hit jumps of this size to want to hit them. If you don’t want it that bad, there just isn’t a point to even lining up. People that crash on these get carted off in stretchers.

Today was a different kind of day though. Riding my refreshed 2017 Norco Aurum (I recently switched from a medium to a large – thanks Pat) and riding with a great crew, we started down the line. 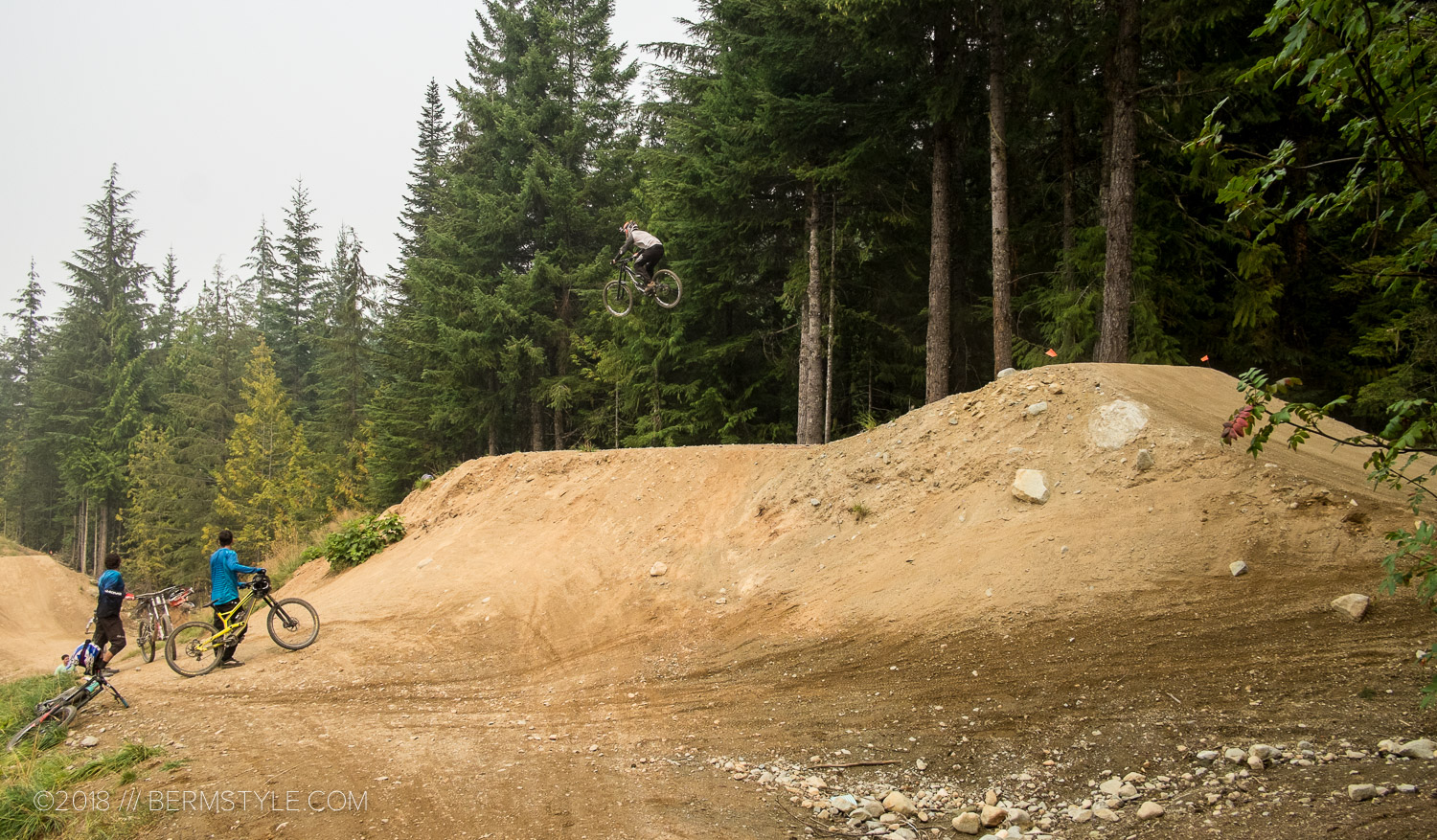 Izaak sends jump 3 on the Crabapple Hits.. a bit deeper than expected.

After peeling off and aborting jump 3, on my first run through, I stopped to snap some photos and iPhone video for my brother.

Jump 3 is where they start becoming the real deal. Izaak had gone a bit deep on 3, and the trick is to land near the top of the transition to have ample speed for jump 4.

The group headed down, and jumping on the second wave, I followed them in, pumping though the first two before coming up on big booter numero uno, jump #3. I recall feeling apprehensive as I came up to the lip at what felt like mach 10.

This is a big honkin’ jump. You could park two tanks between these things.

Then I was off. My apprehension had turned into stiffness off the lip though, and somehow, 25-30 feet out and over 15 feet up, I realized I was coming down far too front heavy. This was very, very bad. I pushed the bike forward hard to get it back in front of me. So hard my tire brapped the inside of my thigh.

Landing hard on the front wheel, I imagined what crashing at this velocity would feel like. But nope, I wasn’t about to go out like that, and riding the front end for far too long and managing to keep the bars straight, things managed to quickly get back under control with just a skinned thigh and a charging heart rate to tell the tale. 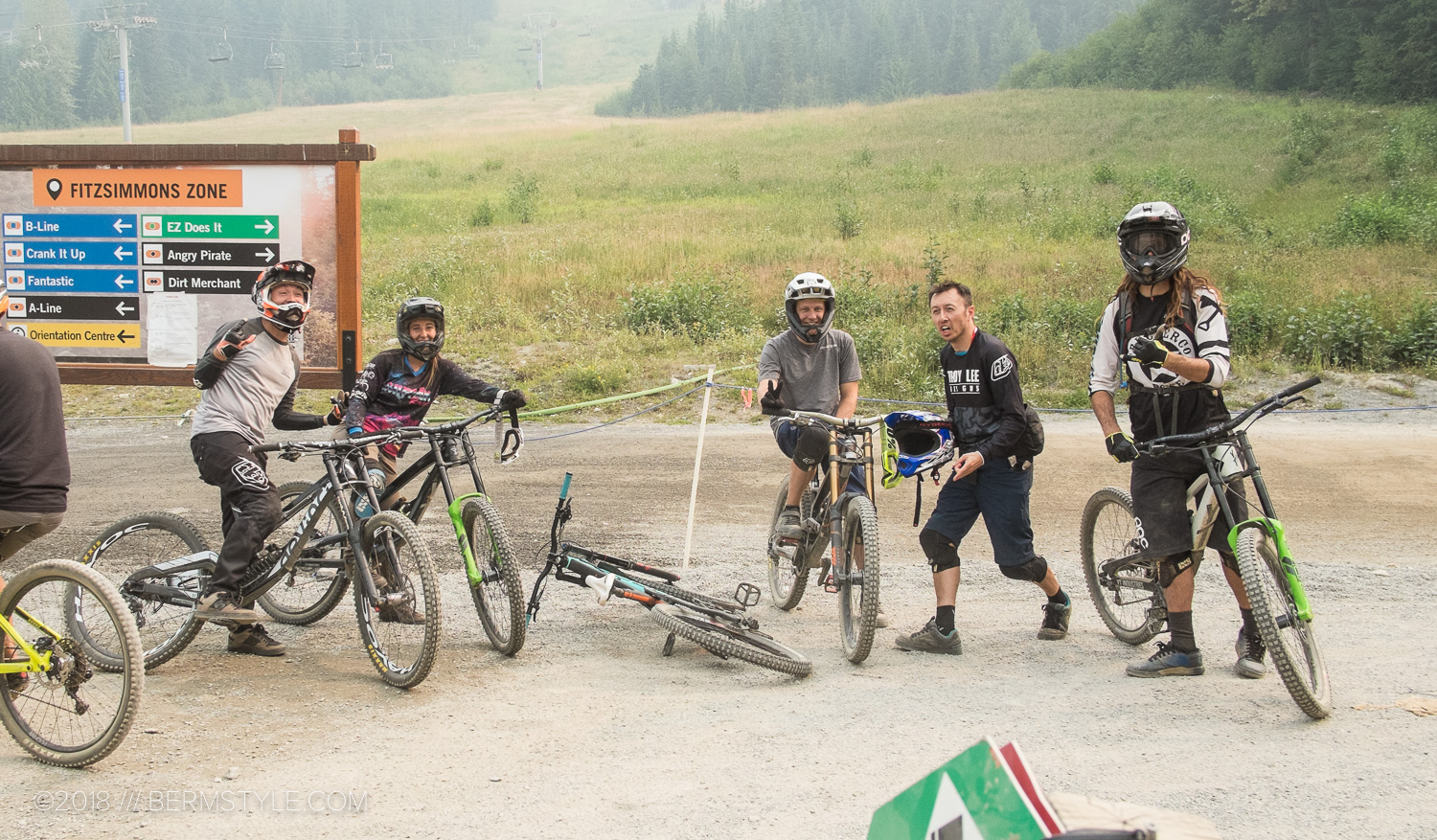 A quick group shot for the memories, before headed down to float some jumps.

Thanks to Ryan and Chelsea for being rad — the new DVO Onyx fork feels amazing btw — and our buddy Chase for the company. A good crew makes all the difference in the world.

Is this the perfect All Mountain / Freeride Trail System? Squamish, BC