Growlers Gulch is a network of single track trails in the Longview, Washington area. Built on private land, these trails were formed by hand one at a time by a strong network of passionate riders. Among them is Jim LeMonds.

If you’ve ridden at Growlers Gulch, you have probably run into LeMonds, who has played a key role in developing the trail system and promoting GG events such as the Tour de Gulch, the Growlers Gulch 5K, and the GG Super D. His website, WriteTek Northwest, doubles as the communications hub for the local riders that I like to refer to as the Growler’s Gulch Crew.

With his 60th birthday approaching this summer, he set a heady goal for himself. To celebrate his 60th birthday, he would ride a total of 60 miles on four trails in the Cascades in one day. These aren’t just mellow trails in the park either. The first trail he proposes to complete that day will be the Ape Canyon trail to the Plains of Abraham, then out to Windy Ridge and back. Recently designated as an Epic Trail by IMBA, he’s planning to do it as his warm up.

Bottom line: this is not something most people can just head out and do.

That is just the first part of the day. The next trail is Blue Lake. Estimated mileage: 12miles.

12 miles may not seem like a lot to some, especially those that crank out long miles on vast stretches of road. However, 12 miles of this type of trail does not equate 12 miles of pavement. It isn’t even close.

The next proposed ride will be to head over to the Lewis river trail, and then he will attempt to complete the Falls Creek Trail.

In addition to the personal accomplishment he hopes to complete, LeMonds is also taking the opportunity to raise money for a number of worthy causes.

If you would like to be involved, check the info at http://writeteknorthwest.com/archives/3422/60-ride.

Jim and I corresponded a few times via email where he gave me the full scoop:

Q: What put this idea in your head?
A: I like challenges. At my age, the chances of doing something like this are diminishing, so I decided this was the time to pull the trigger. Besides, what better way to celebrate my love for mountain biking?

Q: Do you actually think it’s doable?
A: Positively. If I don’t have an I-have-fallen-and-can’t-get-up moment, I plan to finish.

Q: Will this be a solo ride?
A: No. I have a solid team in place that will be with me from start to finish (http://writeteknorthwest.com/archives/3389/meet-the-ride-team). We’re old but experienced. I also have a great support crew that will be there to handle driving and emergency wrenching and carry extra items for us. Support crew members will each ride about half to two-thirds of the total. For me, there’s a lot more joy in doing this with friends than by myself.

Q: What’s the ride route?
A: We will work out the details this spring, but we have a basic plan. First, we’ll hit Ape Canyon with lights at about 3 or 4 a.m. and do an out-and-back there. Second, we’ll drive over to the west side of the mountain and ride from Blue Lake to the Toutle divide and then over to Red Rock Pass and down to the Kalama Horse Camp. Third, Lewis River. Fourth, Falls Creek. If we need extra miles, we’ll probably pick up Siouxon on the way back.

Q: Have you done anything like this before?
A: In 2006, we rode the Boundary Trail from Council Lake at Mount Adams to Coldwater Lake at Mount St. Helens in two days. Four of the guys on this ride were on that one. To the best of my knowledge, we’re the only ones who’ve completed that ride. It’s difficult to describe how brutal it was. I’m guessing that we climbed about 15,000 feet over the 55+ mile route. The trail conditions were ridiculous, with plenty of opportunities for carnage. We’re looking at more miles this time in a single day, but the terrain should be a little more cooperative and there won’t be as much climbing. That said, I expect it to be very, very difficult.

Q: Do you have a special training regimen?
A: I don’t have a trainer or a step-by-step plan. However, I’m already ramping things up and will continue to do so. My goal is to drop another 10 pounds before the ride. I’m already lifting and working on core strength two or three times a week. I will be riding two to three times a week to start and will move that up to three to four times a week as we get closer. I’ll spend time on each of the trails I mentioned and also spend more time at higher elevation to get acclimated. The Growlers Gulch 5,000 is in May so I’ll use that as a stepping stone for training. I don’t have a shot at winning the 5K, but I’ll prepare for it and try to be a little more competitive this year. For me, interval training plays a big role. I’m less concerned about riding X number of miles when I train than I am about putting the hammer down on shorter rides. The Growlers guys are great to train with because they ride hard every weekend.

Q: Are you feeling any pressure?
A: A little. Obviously, anybody can talk. Actually doing it is another thing. When we rode the Boundary Trail ride in ’06, nobody knew about it in advance. This ride has gotten a lot more notice because I’m raising money for Friends of the Castle Rock Library, Girls on the Run of Southwest Washington, and CurePancreaticCancer(PC).org. More people are paying attention, and I don’t want to let them down or embarrass myself.

Q: Will you be using any special equipment?
A: Probably not. Growlers is an all-mountain system, so none of us pull out special bikes when big rides come around; we just use what we normally ride. I rode a Fisher 292 on the Boundary Trail epic in ‘06. That’s what I’ll ride this time. I’ll bring my Niner hardtail as a back-up. As far as I know, no one is making special modifications to their bikes. I expect everyone to be on geared, full-suspension bikes with 3” to 5” of travel. Most will be in the 28- to 32-pound range. You want something durable that isn’t too heavy. I know guys who could do this ride on single-speeds. I’m not one of them. I’ll only resort to the Niner hardtail if my 292 blows apart. And I’ll do that because I know it fits me, not because it’s the best bike for this ride.

Q: What about fuel?
A: I’m experimenting with several products and have a couple of racers and Ironman competitors who are advising me. I have a tendency to cramp, so taking magnesium/potassium and paying attention to fluids and fuel are very important.

Q: Will you give up beer as part of your training regimen?
A: Not a chance. Some things aren’t negotiable. 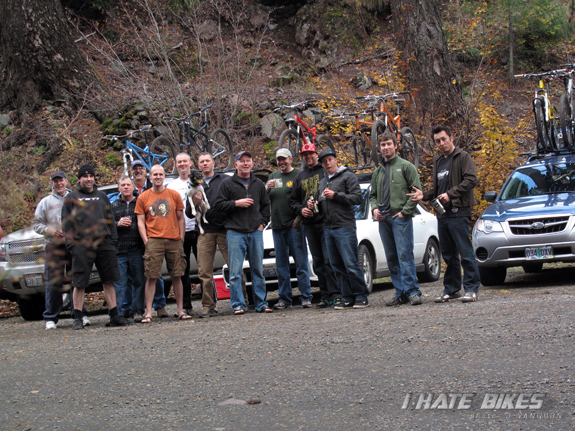 With the Growlers Gulch crew after an epic ride on the SW side of Mount St. Helens last fall. Photo: JVH