A few weeks ago I enjoyed a night out in Oakland to celebrate the impending nuptials of a friend. At the end of the night, we stumbled out onto the street and went our separate ways, while I walked over to the bike rack where my ride was locked up, only to witness the following sight. 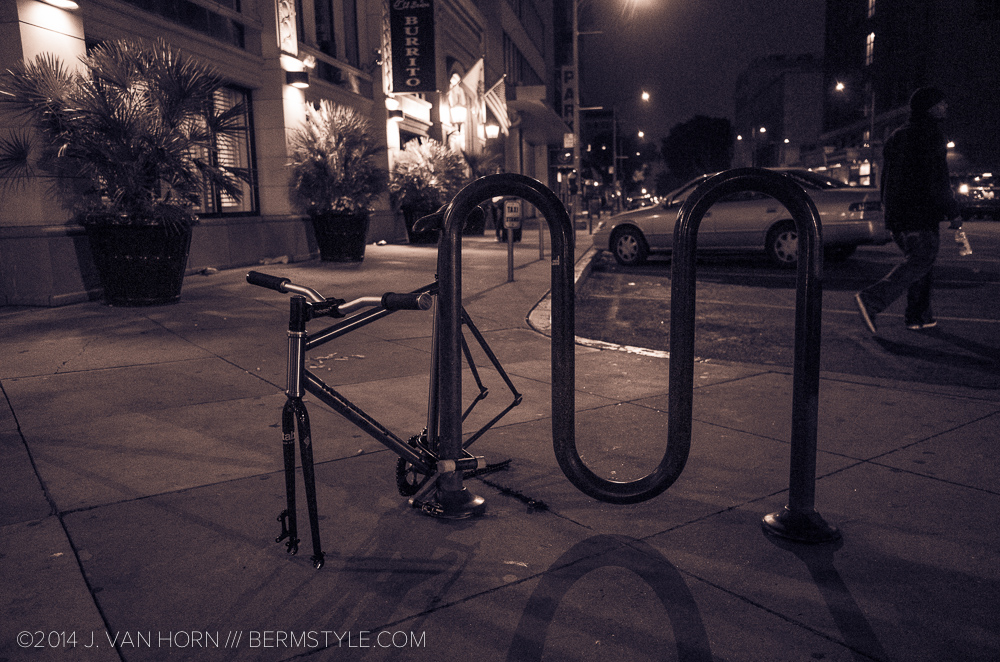 My wheels are gone. Fuck you bike thieves.

Sons of bitches had jacked the wheels off my ride.

And they came prepared to do it— my front wheel skewer was secured by a 5mm bolt, and the rear wheel with 15mm nuts.

On the bright side, I was given the opportunity to walk off a night of drinking. At least, that’s the positive spin on the situation I gave myself. The rear tire was about worn out as well, after a few thousand skid-stops, though I really liked the front tire. And at least I had pulled my lights off the bike. Tired of replacing batteries that cost as much as the lights themselves, I’ve upgraded to blinky lights powered by USB rechargeable batteries that remain in my possession.

Things could be worse. BUT I was obviously pissed off, as anyone would normally be. I was now out $150-$300 of my investment.

I took my camera out of my pocket and took a few shots to document the situation, as is my habit. Not that it would matter; my insurance deductible is so high that at least three fixed gear bikes would have to be missing to come close to my current deductible. After I shot a few images with my compact, I pocketed it, then posted the following image on Instagram, so I could share the news with my social media feed:

I suppose the only thing more frustrating than being on the receiving end of a theft, was the callous responses I received online from a few of my peers.

According to a few individuals on Instagram/ Facebook, I’m to blame for letting my wheels get stolen.

To those individuals:  you kinda suck.

Perhaps what you didn’t know, is that I’m fully aware I could have carried a cable to secure my wheels had I wished to have additional security. Fuck it, I own three full length New York Chains, I suppose I should have carried those too. Thing is, that didn’t keep a favorite Pike suspension fork and front wheel from being stolen off the front of my dirt jump bike in San Francisco a few years ago. And I don’t like carrying a ton of crap with me every where.

I’m all to aware that stolen wheels are part of living in the city, and locking your bike each time you leave it, is an exercise in risk assessment.

I choose the simplicity of a single u-lock as well as the convenience, and chose every part on this bike based on how willing I am to lose it. In fact, the wheels on this bike have lived on a build or two before, and were acquired second hand.

The rear wheel was purchased at a bike shop in Portland that specialized in city bikes and sold used components. The front wheel was a hand me down from a bike shop owner I had worked for years ago. Both were extremely reliable, and had served my needs for transportation for years in a few different cities I had lived in.

I was sad to see them go.

But I was glad to see my bars, stem and fork where still with me. Ironically, Inga had her wheels stolen less than a year ago, less than a mile from the location my bike was parked at. I had warned her as well of the risks in locking her bike in front of her building. And when she was broken up and upset about her wheels, I simply went online and picked out a budget replacement set and clicked, “buy.” They’re not as nice as the stock set she had, but she seems to like the new color and she was back on her bike two days later.

As for my wheels, I’ve moved on. I’ve got a crappy commuter bike that is functional I could put into rotation, but have instead been riding one of my nicer bikes. This one doesn’t get locked up at night, as a friend built the frame for me, and I’m not willing to put it at risk. At some point, I’ll pick up a replacement wheel set, and my fixed gear and I will ride again.

There’s no lesson to be learned here, just the acknowledgement that some of our fellow human beings deserve to be punch in the face repeatedly until all is left is a bloody mess. 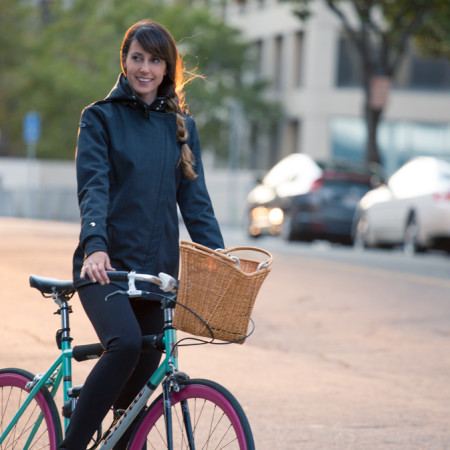 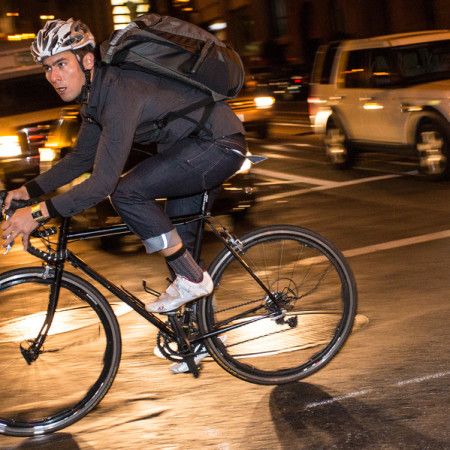 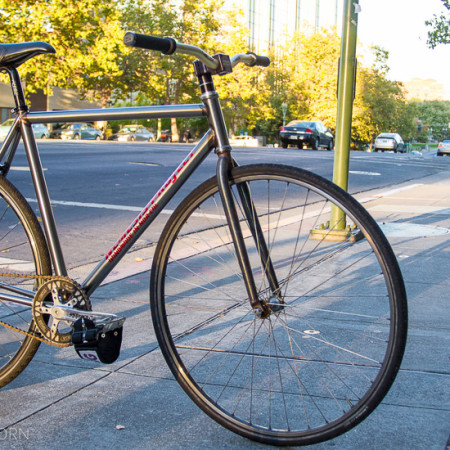