Bikeskills recently put on a very special skills workshop at the Northstar Bike Park in Tahoe. Not just any skills clinic, it featured some of the top riders in the world. Santa Cruz Syndicate riders Steve Peat, Cedric Gracia, and Greg Minnaar were in the house. A certain former world champ of the ladies class, Leigh Donavan was also present for a women’s only class. It isn’t often your average rider gets to receive instruction from the top talent in the game, much less hang out for an day riding with them. (myself included) So when I was invited to sit in on the workshops to see what its like to learn Bikeskills from some of the best in the business, you can bet I was scrambling to find a way to make it down from Portland, Oregon to Northstar at Lake Tahoe. 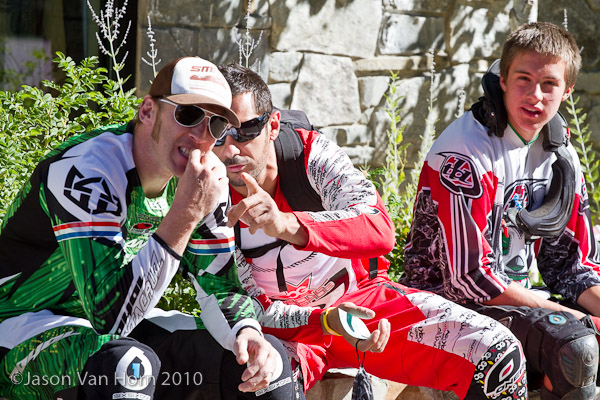 Caught- Cedric points out my stalker camera to Peaty.

When I arrived at Northstar, I met up with the BikeSkills crew to get situated, then being me, pulled out my camera to get some photos. I thought I was being sneaky by using my telephoto lens to snap some candid shots of the Syndicate rock stars, before heading up to the BikeSkills base camp by the lifts. (as you can see from the photo above, I think I got caught)

After running the gondola up to the base came, I had a chance to check out their setups. The pros take their bike setup very seriously. Cedric spent a good 30 minutes tweaking things on his ride, adjusting air pressure in his tires and suspension, and more. 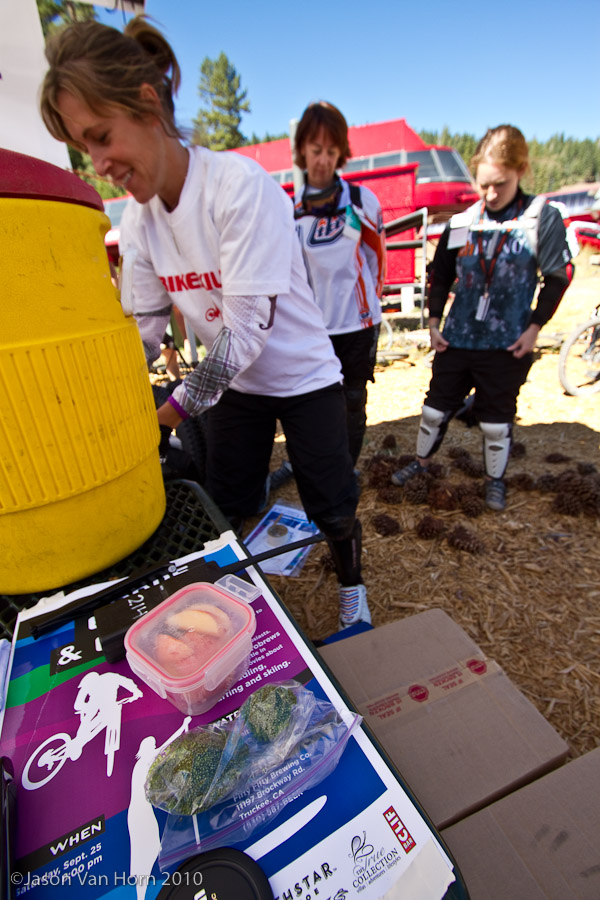 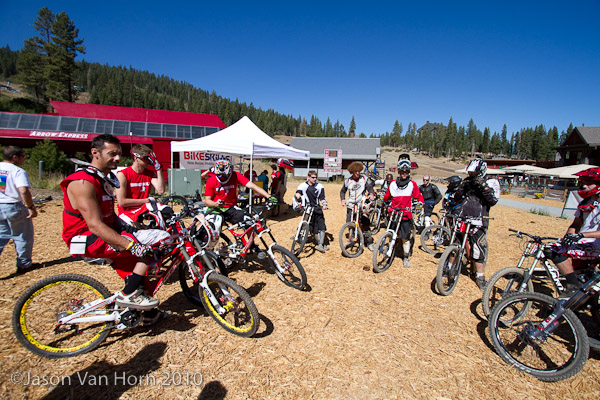 The members of the DH clinic gather around Minnaar, C.G., and Peaty before heading up the lifts.

Once the class got underway, Karl Rogne (a level Cat 1 DH racer himself) of BikeSkills gathered up the troops, and we headed up the lift to get started. 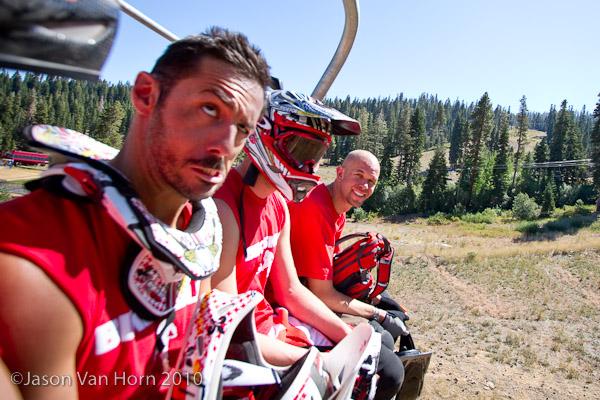 C.G., Minnaar, and Mr. Rogne during the ride up 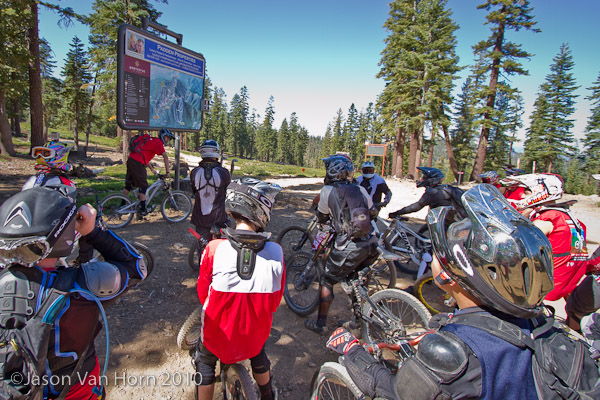 The class began with the basics. While there were a wide variety of skill levels in the riders present, refining and dialing in basic form and technique is something all riders can take a look at to take their riding to the next level.  Carl started with a demonstration of a neutral attack position, while Cedric, Greg, and Steve critiqued, and discussed how being lazy on the bike effects form, and instills bad habits. (This was actually pretty useful information- earlier this year I sat in briefly on a clinic from Lee McCormack. In the five minutes I spend evesdropping and shooting photos, I picked up some useful tips on positioning and form that has done a lot for my riding, the main thing- having an pronounced elbows-out attack position has made going fast easier than ever- which also proves you can always go back to the basics) The riders then set themselves up as the Pros did a walk-through, giving feedback and discussing subtle differences in body position for riders clipped in vs. platform pedals. 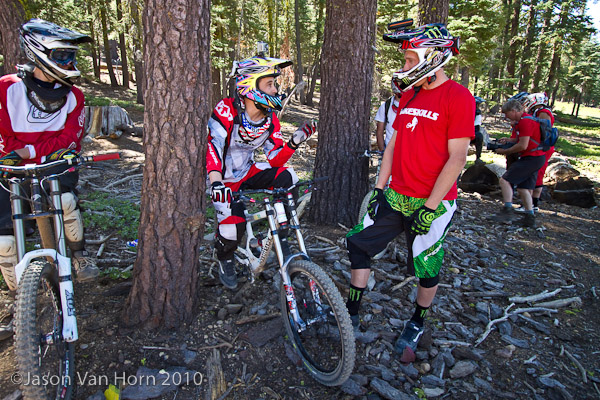 After a bit, the class moved on to apply body positioning to corning. 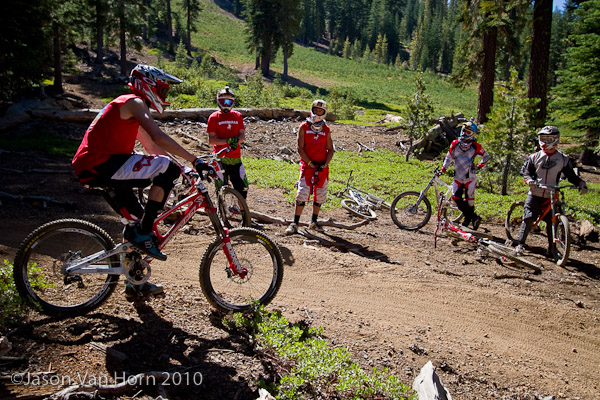 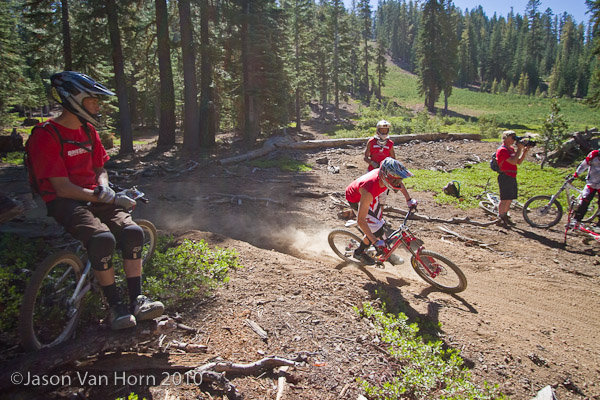 After discussing principles of cornering, the Champs then demonstrated proper form at speed. The class then took turns riding this short section of trail as the pros offered feedback. (Peaty said my form was spot-on- yeah, yeah!)

The loose and dusty trails at Northstar are filled with rocks, and make for an interesting time. Needless to say, goggles are mandatory, and sightlines are short when following other riders down the hill. It definitely makes things interesting, as the best way to ride the Northstar terrain is to attack at speed. Momentum is your friend, and the faster and smoother you flow, the better it feels. Quite a dramatic change from the loamy stuff in the northwest. Even the hardpack clay at Post Canyon rides quite differently. I spent much of the time re-adjusting to the loose stuff. 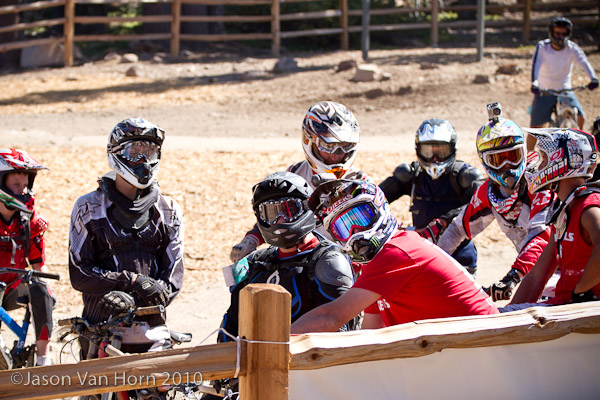 Mr. Peat addresses the riders before we headed down the Livewire jump trail. 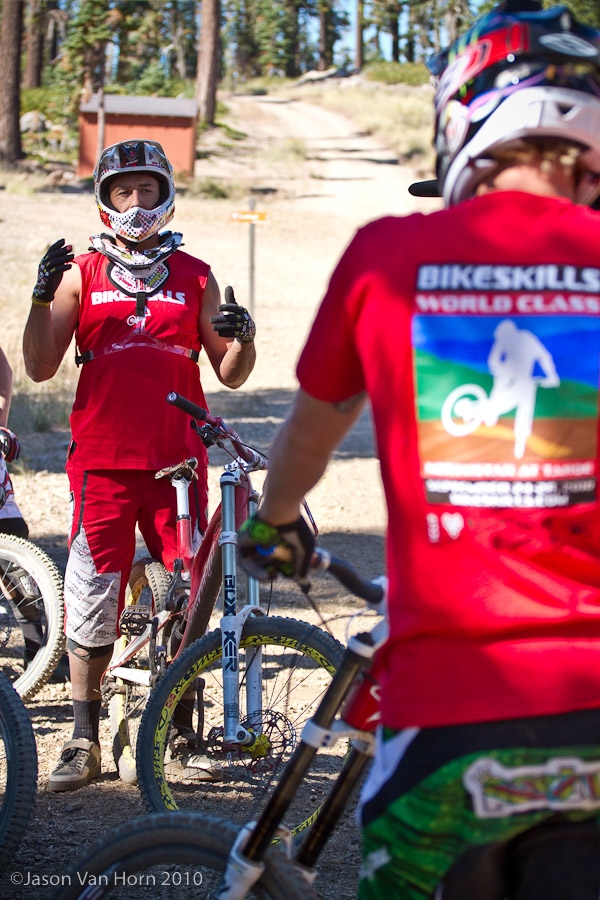 As the day progressed, we moved on to the Livewire trail where riders could focus on refining their form on the groomed (mostly, some of the turns were starting to get a bit blown out) jump trail. Livewire is unique, in that the entire length of the trail (ok, most of it) is lined with sprinklers. Which means it has the best traction, and best trail surface on the hill. For this one, the guys handed the chair to Cedric, one of the best dirt jumpers on the world cup circuit. Riding the trails behind a world class rider like C.G. was a treat. Although he was obviously riding extremely mellow, he was jibbing everything on the trail. Cedric’s riding has always been an inspiration to me personally, so I was having a blast emulating his lines all the way down the hill. Definitely a day for the books. 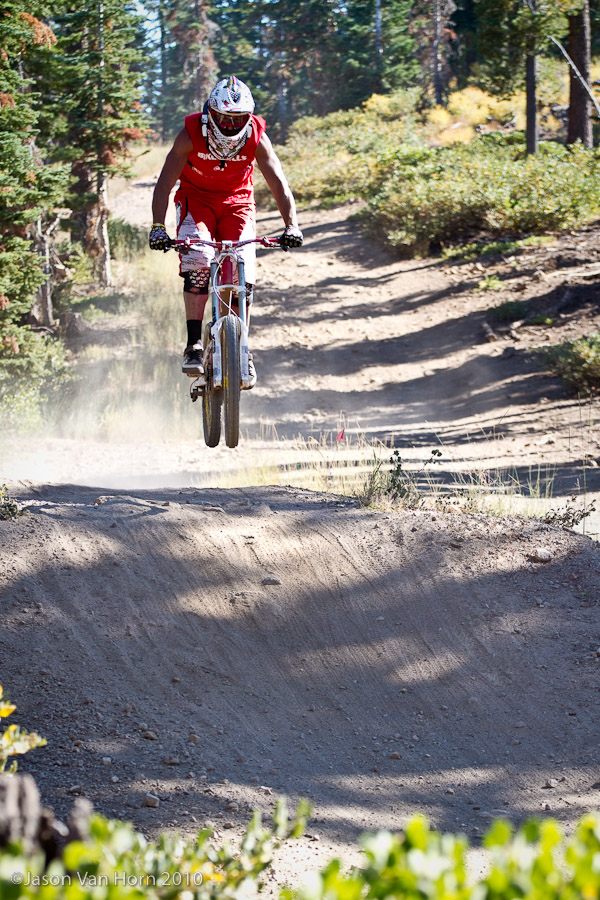 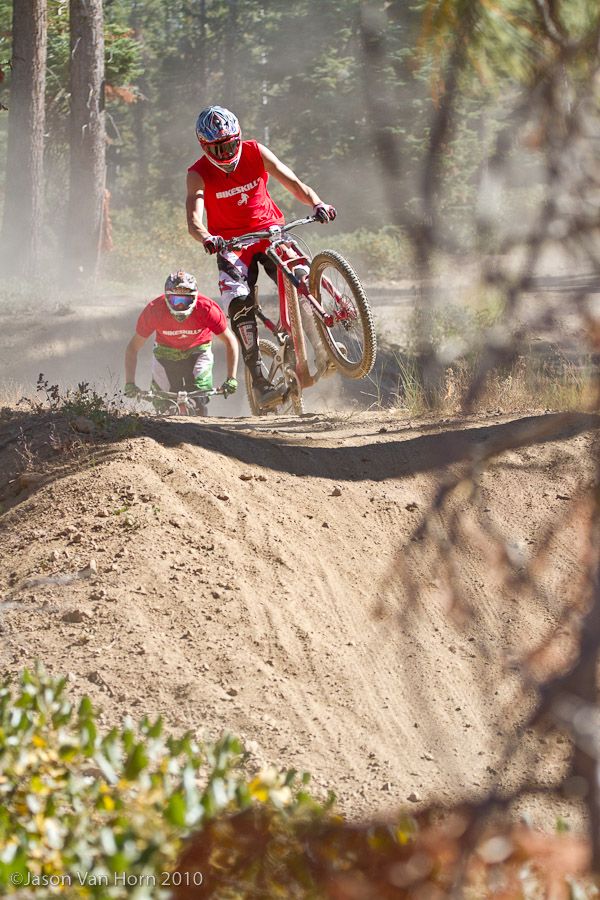 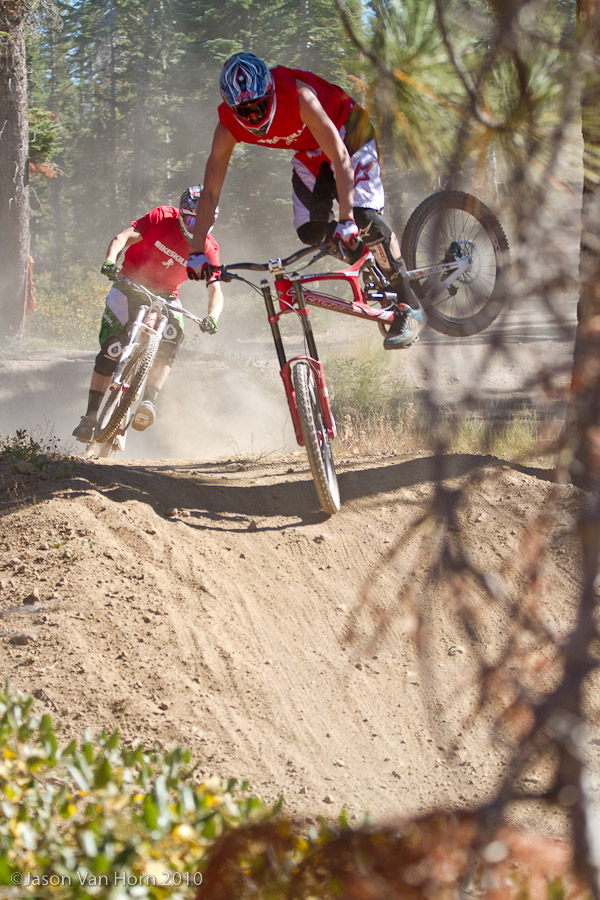