When I was on the hunt for a new urban sled, the Gran Royal Lurker came on my radar while pondering the types of radical maneuvers I would actually attempt to master on a fixed gear. I’m primarily a mountain biker with a bit of a BMX background, but I live in a city and the sad reality is that I ride on pavement everyday while my favorite bikes hang on a hook. While I had built up a fixed gear in the past, it was mostly out of curiosity  and I never took it too the next level, relying on a front brake to stop and never committed to learning the proper way to ride it.

When I decided I was going to get another one, the problem was I wasn’t sure what kind of fixed gear riding I actually planned to do. Did I just want a light and snappy new urban whip for ripping around from point A-to-B? Or was this new ride going to take the place of my dirt jump bike and its slammed saddle and way-too-slack seat tube for actual pedaling around town? Since I enjoy dirt jumping and riding BMX bikes, fixed gear freestyle has been on my radar as well. I wasn’t sure if I’d ever want to put pegs on a bike with big wheels though, much less a bike I couldn’t coast on, (which meant no manuals) so the Lurker looked like a great compromise; not quite a freestyle fixie, but built for serious urban ass-kicking. 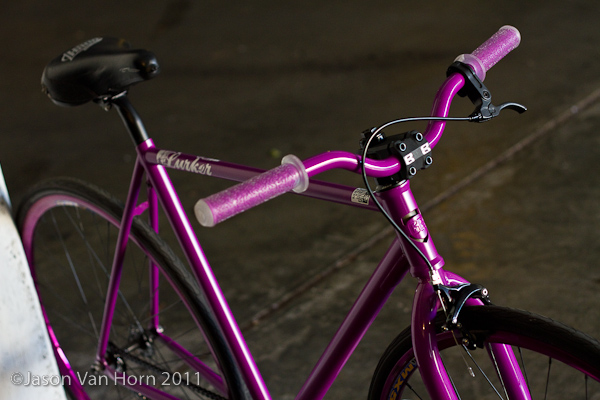 The old school BMX saddle was a brief experiment.

As the fixed gear freestylers have found, 700c wheels don’t really hold up to abuse – especially if you’re putting a lot of side load on the wheels. However, its all relative. For a 700c wheel, the rims are pretty dang solid, and for my purposes they do just fine.

Enter the Lurker. I found the bike when I was surfing a few fixed gear blogs, and it looked like a solid ride at a right on price point. That and I found it for sale, which really what the deciding factor, and the bang for the buck factor increased 100%. For mountain bikers and 20″ riders familiar with the Eastern brand, many of the details of the Lurker will be quite recognizable, as it features the integrated seat tube pinch bolt. Grand Royale is the urban line of the Eastern brand, so you know they have a bit of experience on building a sh*t kicking ride.

There are a few solid features on the Lurker that make it stand out that really appealed to me: 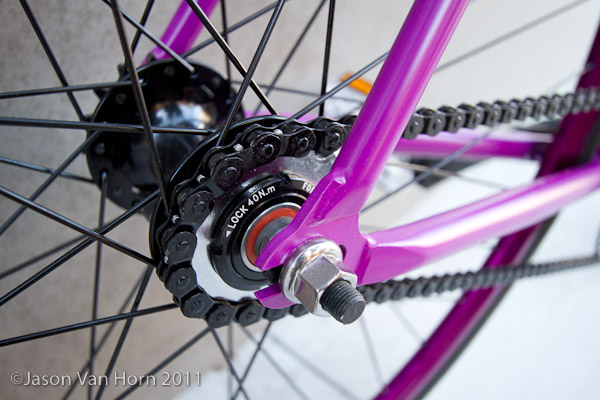 The Lurker comes stock with a fix or freewheel option. Just flip the wheel.

It also included caliper brakes, which I thought was pretty cool, as I happen to live at the top of a hill, and don’t feel the need to risk life and limb before breakfast. I also happen to like riding my bike and drinking coffee, so I moved the front brake lever to the right side. What didn’t make sense was the seat tube bridge- although the bike came with a rear caliper brake, the bridge isn’t compatible with a rear brake. (it’s possible that short work with a drill could easily change this) As this bike straddles the line between being a dedicated fixed freestyle bike and a tough as nails urban utility bike, this didn’t quite make sense. It doesn’t matter to me much, as I planned to ride the bike fixed, (I still have my other grocery bike which now has a freewheel) but it does limit the applications of the bike for others that might not want to commit to being fixed.

The other item that stood out which I wasn’t sure if I liked at first was the diameter of the top tube. For someone that grew up on oversized aluminum tubed bikes, the top tube is diminutive. However, it does make sense for this application. Large diameter tubes can be made still and strong while using thin tubing; for a bike that will likely get locked up with the top tube regularly contacting metal bars, this could result in dings and dents. And if you do go the freestyle route on this bike, dings and dents are part of the game. The smaller tube is probably a bit heavier, but you know that thing is likely to be tough as hell.

During my time with the Lurker I experimented with a few different bar widths, and settled on the combination of a 27″ alloy Easton bar combined with a 50mm stem from Nemesis project. The stock bar was a bit narrow from my taste, and quite heavy.

Overall the bike is a solid choice for someone that wants a bomb proof starter, but I found it overall to be to much of a compromise once I figured out what I wanted. While I love the solid reliable feel, my next choice will be a more traditional track frame that isn’t quite so portly. I love the general aesthetic of the bike, but it is an attention getter, and because of that I never left it locked for very long. 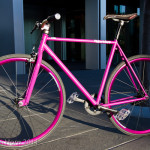 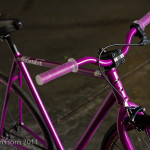 The old school BMX saddle was a brief experiment. 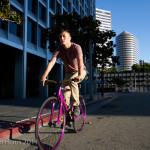 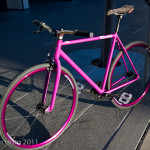 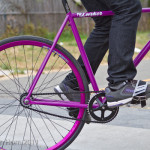 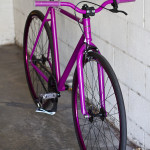 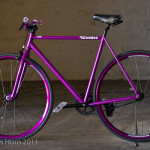