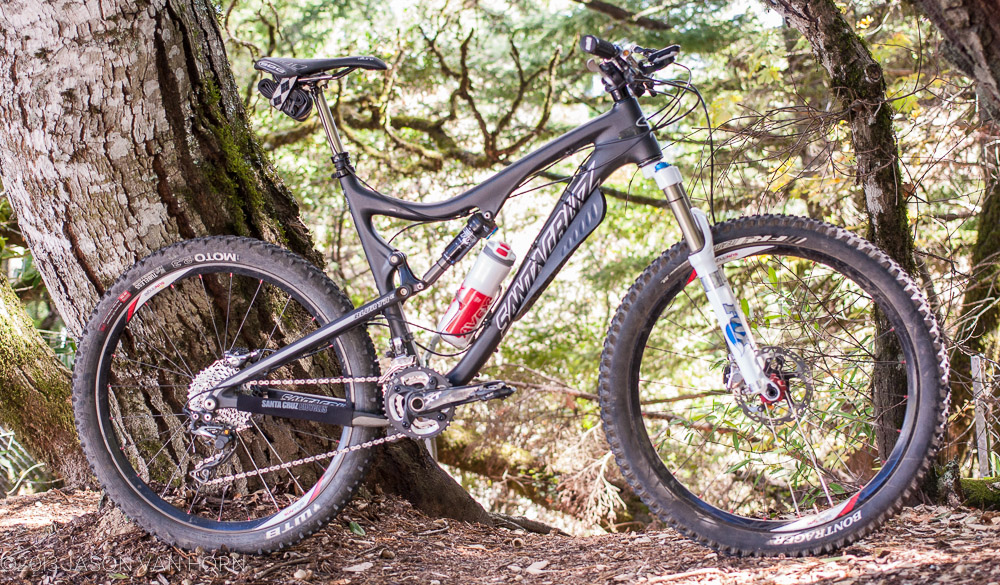 If you’ve read the two previous posts detailing my experiences with the Santa Cruz Blur TRc, you already know the TRc to be one of my favorite trail bikes to date. In fact, the only nagging issue I had with the TRc was due to sizing. It seems to be somewhat inline with what I’ve heard from many other riders as well. If you’re of average height— that is, 5’10” or so— that puts you smack dab in the middle of the medium and large sizes according to the chart published by Santa Cruz. And although I’ve always been a size medium, the reach of a medium TRc is about a centimeter shorter than medium frames from other manufacturers. This results in my having to run a 70mm stem in order to have a cockpit suitable for long distance trail riding, when my preferred spec is a 50mm. Although I had no issues rocking the 70mm, it always bothered me, and the 50mm just made the reach too short for serious trail rides. This bothered me so much that I decided to change things up after almost a year on the bike.

After a season rolling on a size medium Blur TRc from Santa Cruz, I put the frame on Craig’s List and ordered a large replacement. In hindsight, that was a mistake. To the point, the medium was too small. And the large was too large. Although I love the bike, I’ve since moved on.

What follows is a brief summary of what I did to try and make the large work for me.

The purchase of the large frame was a move I began to regret less than a few weeks later when Santa Cruz announced the Solo. Same bike, bigger wheels. But the sizing conundrum I was dealing with was for the most part resolved with the improved frame design. 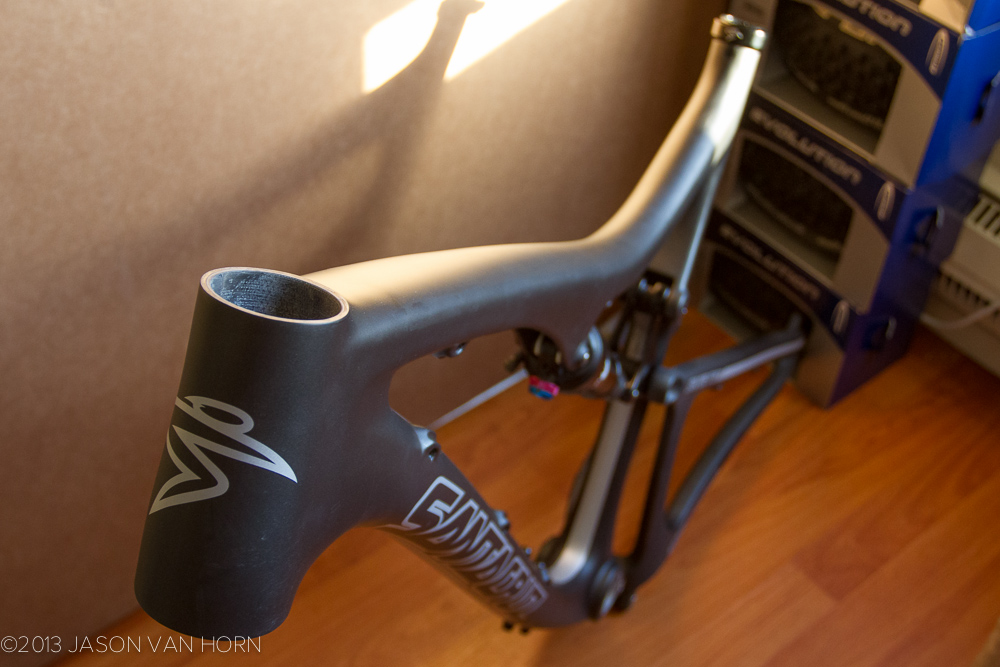 Out of the box. A large Santa Cruz TRc.

However, at the time I was more concerned with an major internal debate: do I stay with the shorter travel platform, or drop it to go with the latest and greatest— the just newly released Bronson, with its 650b wheels and additional travel.

I should have ditched the whole bike. However, looking at my quiver of bikes, the Bronson would have been redundant with a Nomad, and I wasn’t ready to part with it quite yet. Plus part of me was still holding on to a silly commitment to 26″ wheels, although jump trails are few and far between here.

I should have heeded the hype and dove head first into the latest and greatest like many of my riding buddies. But first I had get over 26″ wheels.

I was on the fence for months about ditching the medium, and was super bummed to leave the green color way of the 2012 TRc. I had liked the graphics and color so much I had a matching kit assembled around it.  The black 2013 TRc was solid though, and I can’t find fault with the minimal approach to the graphics, other than it looked like any other Santa Cruz. In fact, all the models pretty much look the same now, other than the wheel size.

The build up of the large looked pretty solid. But as I stated previously, the new frame felt a little too big. 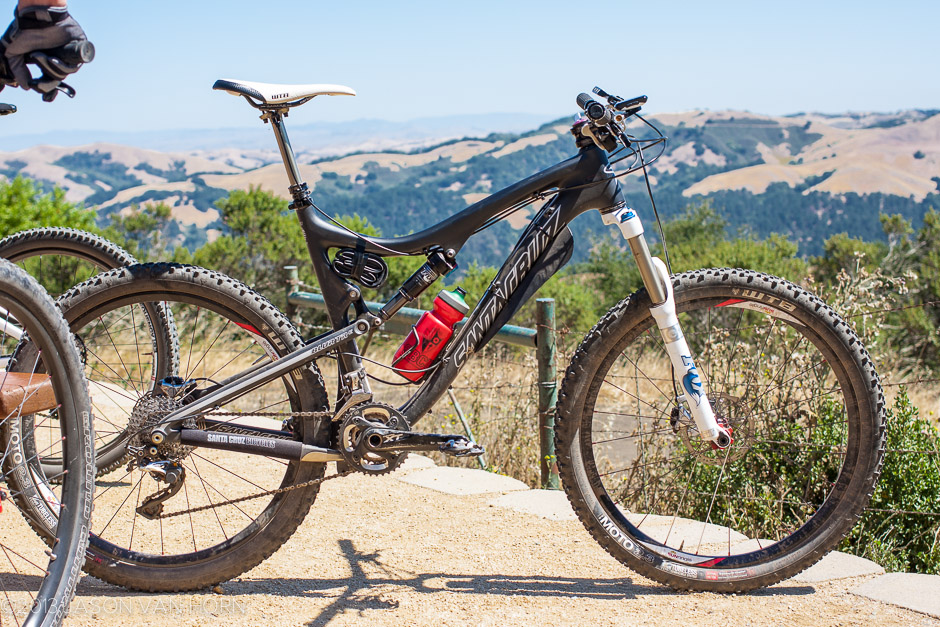 Initial buildup of the Blur TRc in large.

What I really wanted was a frame that split the difference, along the lines to the Medium/large 18.5 Trek offers in their line. If Santa Cruz was a larger bike company, I have no doubt this model would exist in response to consumer demand— I know I wasn’t alone with this.

To be specific, the primary issue with the large frame was the tall seat tube. With a length of 19.5″ center to top, the seat tube on the large is excessive in height. To get the reach I wanted, I sized up and now had issues running a 5″ dropper post and getting my saddle low enough. Since I’m unwilling to compromise with a 4″ post, (although I do own one- it lives on my large Highball) I now had a seat height that was slightly too high.

I needed to get the saddle height down, so I began looking into saddles that had a lower center of seat rail to top measurement. 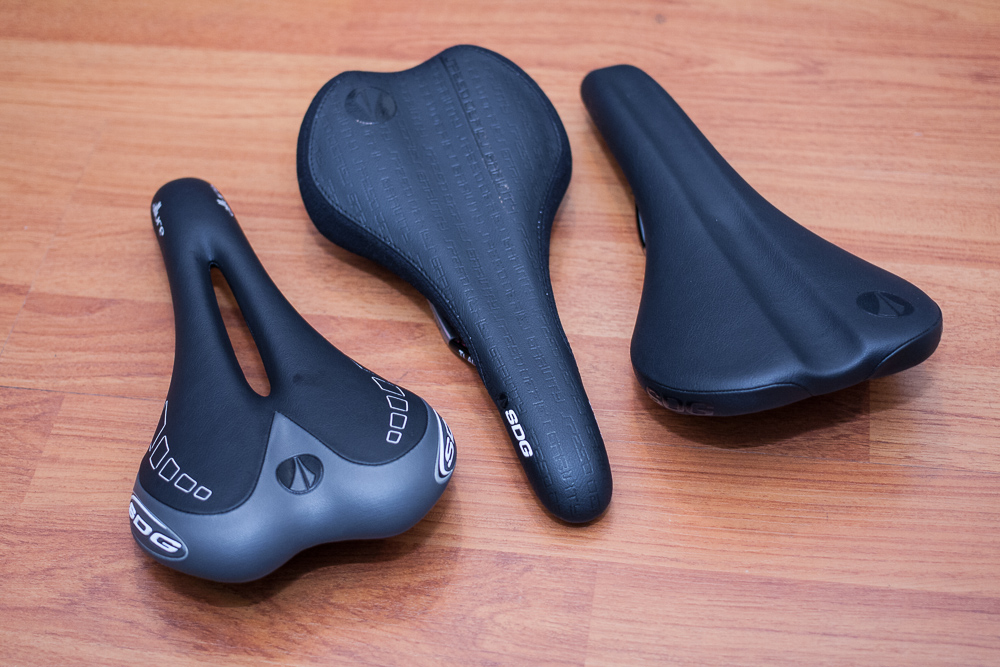 Saddles from SDG: the Allure, Circuit and Falcon

Tyler of SDG Components went the extra mile when he heard of my predicament, and sent out a care package with a trio of saddles for me to try out. Ironically it was the women’s specific model, the Allure that had the lowest overall height.

I also changed out my 50mm Thomson stem to a 40mm stem to shorten the reach that was now slightly long. My first choice was the Megaforce 2 from Syntace. In this, Kenny at Syntace USA was awesome. He didn’t have a 40mm in stock, so he pulled one off of a demo bike for me to use.

<Full reviews of both saddles and stem to follow, but the Syntace stem is lighter and stiffer than the Thomson model. I’ve got a new favorite.> It also helped make the large frame a bit more manageable. 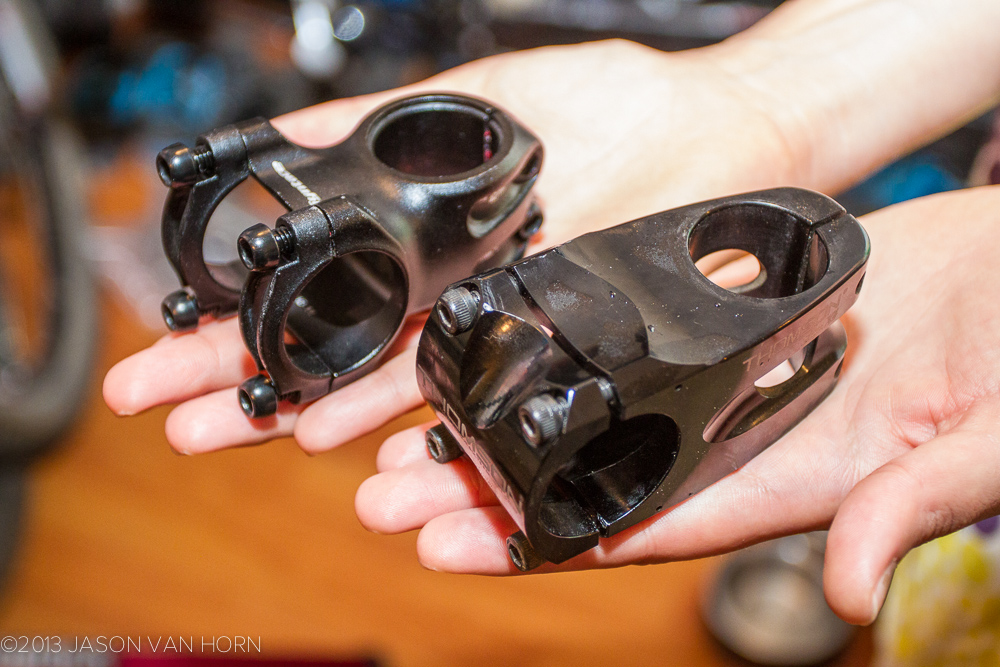 The irony is that less than two weeks after my new large frame arrived, Santa Cruz announced the Solo. Essentially a TRc with 27.5″ wheels, the Solo (later renamed the 5010 due to trademark issues) incorporated a few new design changes that were exactly what I wanted. Mainly though, the large now had an 18.5″ seat tube.

So I was a little bummed, but after swapping out my saddle and adding the shorter stem I finally had resolved the bulk of my fit issues. The last change I made was to move my cleats forward a few millimeters, which resolved the issue with seat height. <I have issues with foot numbness AKA ‘hot foot’ that can be addressed for some by running a more rearward cleat position>

Size issues resolved. On burly descents, I’d still wish I could drop the saddle a bit more, but I have a longer travel rig that I’d use for double black diamond level trails. There aren’t really any trails like that in the Bay Area anyway. 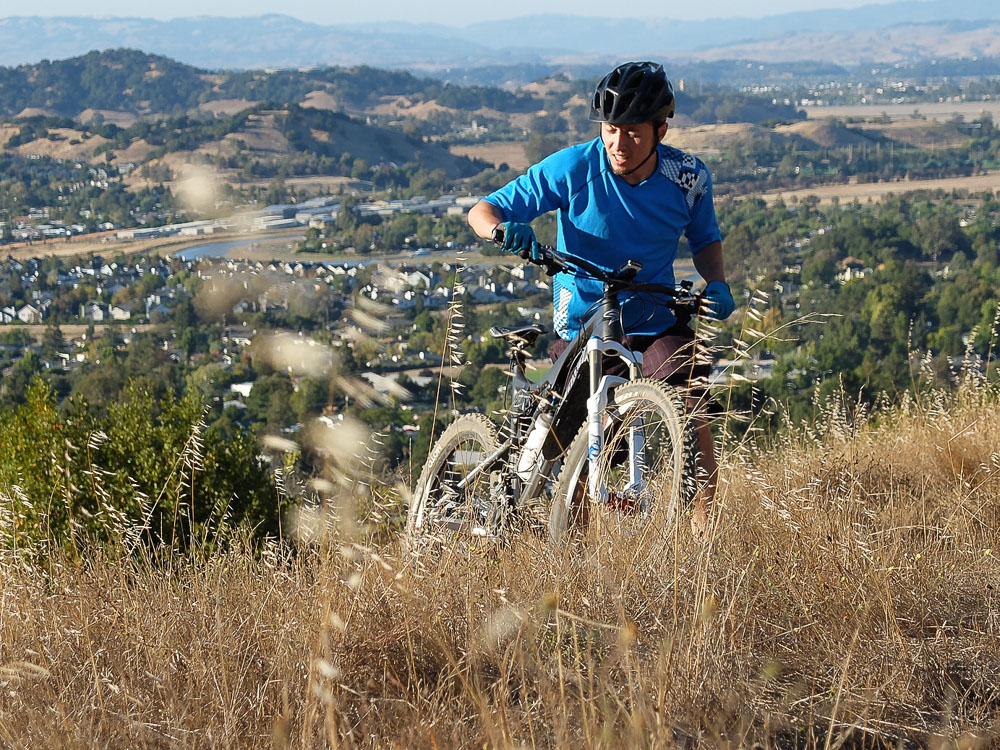 The bike ripped. Unfortunately, the bike wasn’t as fun to whip around, being that much bigger. Swapping out to a large lengthened the wheel base a full inch, and the larger version of the bike was much more stable at speed. I found myself pinning it on descents that much harder. So much so, that I started riding the TRc faster than one should be riding a bike with only 125mm of rear travel, and I got myself in a few hairball situations.

My Fox 32 Float wasn’t liking the additional abuse either. The stanchions had developed a nasty creak in the crowns. When a friend pointed out that one of the stanchion tubes had shifted, it was time to pull the fork and send it in for warranty.

I ended up riding my Highball 29er a lot for the month the bike was down. Most of the time the 29er has sat in its corner, and has received very little saddle time, as my first pick has always been the TRc. Now it was it was a toss up between the Nomad and the Highball, and having been spoiled with the light weight of the TRc I elected to give the Highball a chance to win me over.

On smooth buttery terrain, I found myself actually finding some love for the big wheels. While they aren’t as fun or playful, they did provide a lot of traction in the turns, even with 2.0 Small Block Eight tires. It took a while to learn to make it work for me and I tweaked the cockpit to put the emphasis on fun and handling. But then I started to like it. It’s a different style of riding than I generally prefer, and I mostly stuck to trails that were fun on a hardtail.

When the Float came back and I finally had the TRc put back together, it was too late. I had lost the love and drank the kool aid. Getting back on the TRc, I noticed a big lack of traction in comparison to the 29er Highball. My big wheels with the little knobs hooked up better in turns than my large volume 2.35 tires. And the large TRc just wasn’t as fun as the medium.

That was the moment that clinched it for me. A painful one at that, that left shockwaves reverberating through my wallet, that I’m still feeling.

I ordered a Santa Cruz Bronson. More travel, bigger wheels. A little better going down, not as good going up. But better suited overall to the kind of riding I do around here, and how aggressively I like to ride the trails. 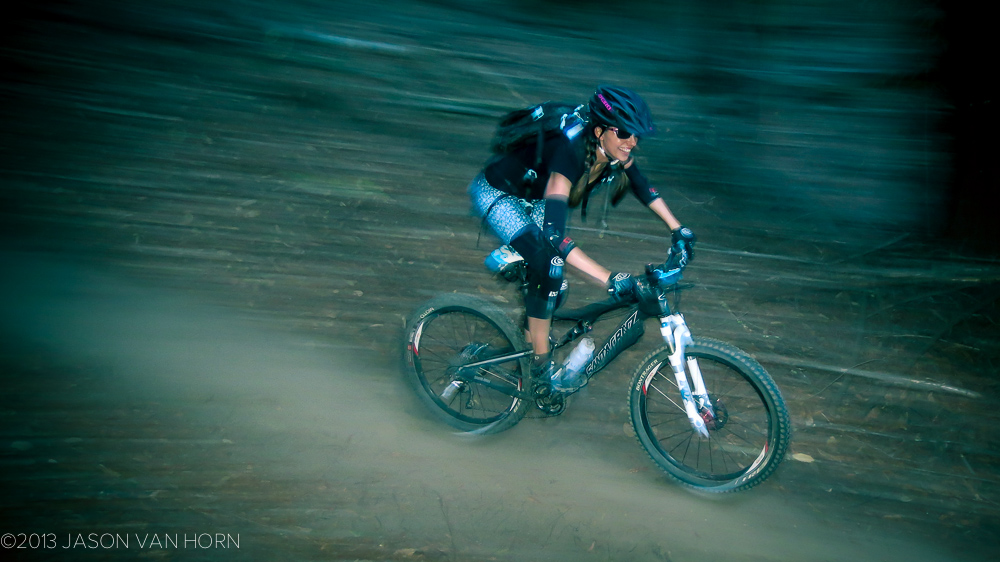 Inga at Demo riding the TRc.

I’m not crazy about 29″ wheels. While they’re pretty sweet for aggressive XC, I’m not into their monster truck handling emphasis over fun. I have no doubt that in many situations, they’re the fastest. And I’d love to have a Tallboy to play on for a while to see what it does to my personal records. If I had that kind of disposable income, I would have one.

My girlfriend Inga is taking over on the TRc for the next season. We’ll see how she likes it for that long haul. In some ways it’s a bit big for her; I think she’d be happier on a medium, but with the 40mm stem it fits her like an XC bike, and handles like a trail bike. Compared to her Blur LTc, it climbs like a rocket, and she’s taking advantage of it to rack up QOM’s at our local park.

But if I ever find a killer deal on a medium TRc frame, I just might pick one up… 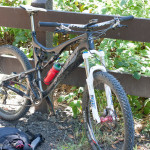 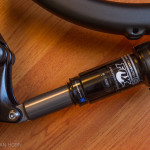 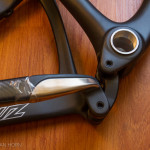 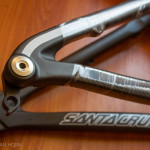 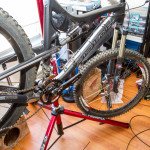 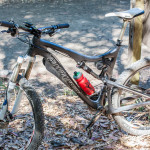