Having your own backyard pump track is a lot of fun. We didn’t get to ride ours as much as we would have liked this summer due to the distant location, but the sessions we did have were a blast. I built an new outer loop extension to the track that really opened up a lot of options for new lines, and while the track has  a ways to go before I’ll be satisfied with the riding experience, what we have going works well and has a number of lines that offer plenty of options for creativity. 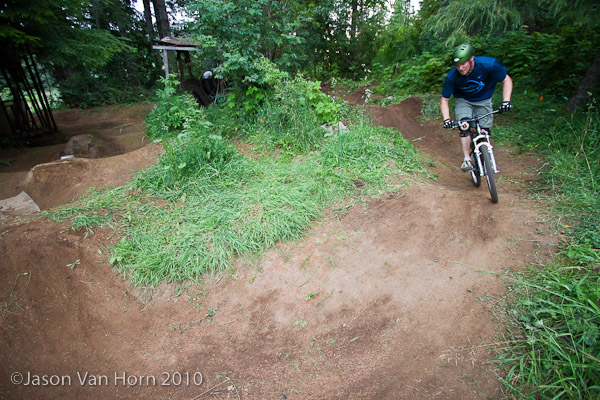 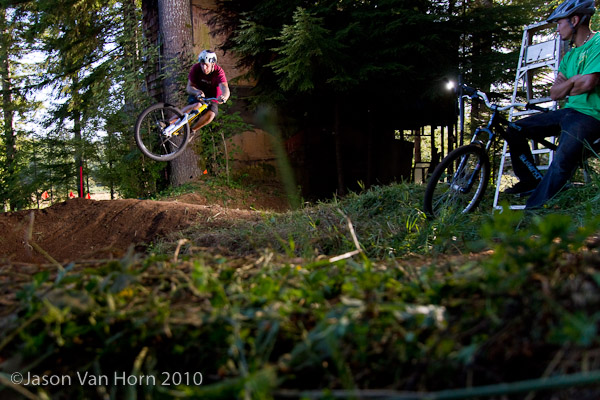 Alex Hansen airs out of the 180º berm into the step up/berm line.

The initial pump track layout was a lot of fun due to the skatepark type line options the dirt bowls offered. However, while it was cool to pump around on, a pump track experience without lots of turns isn’t going to prep your riding skills for a course like the Sea Otter DH.

Compared to the initial layout, the extension makes a huge difference in the riding experience. The new extension is a few feet higher, which adds a new dimension of fun as well. To make it around the new loop, you need to work the rollers. The bonus is that at speed, the step up rollers can be easily jumped. 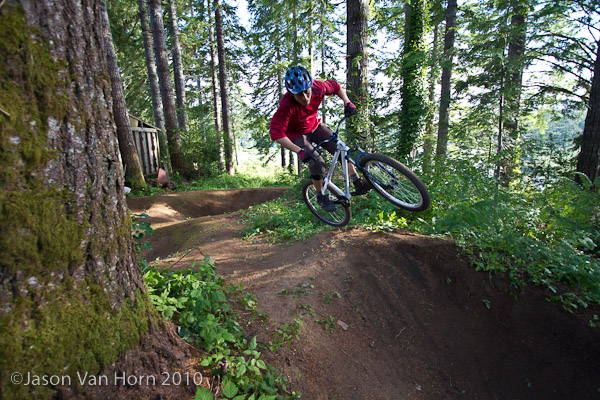 To get the speed to make it through this section, a bit of a hop is helpful. 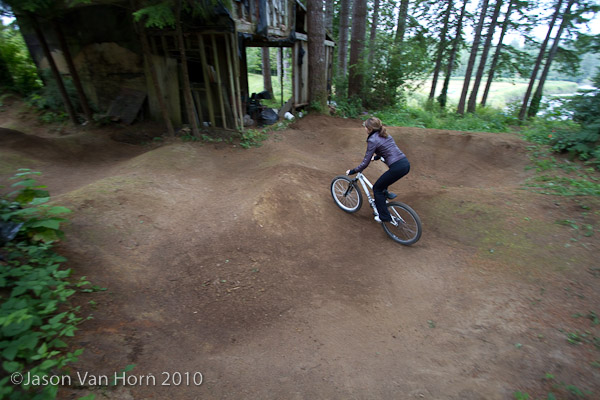 Inga takes a lap around the pump track before heading into town for drinks.

In the initial layout the second bowl’s radius never really worked. The new line options make all the difference. With all the speed you can generate from the new outer loop, we had to shave some height off some of our rollers. With the increased speed, the spacing of the rollers could be adjusted as well, but we elected to leave them as they are, and built a lip to air the first set coming down the new outer berm. 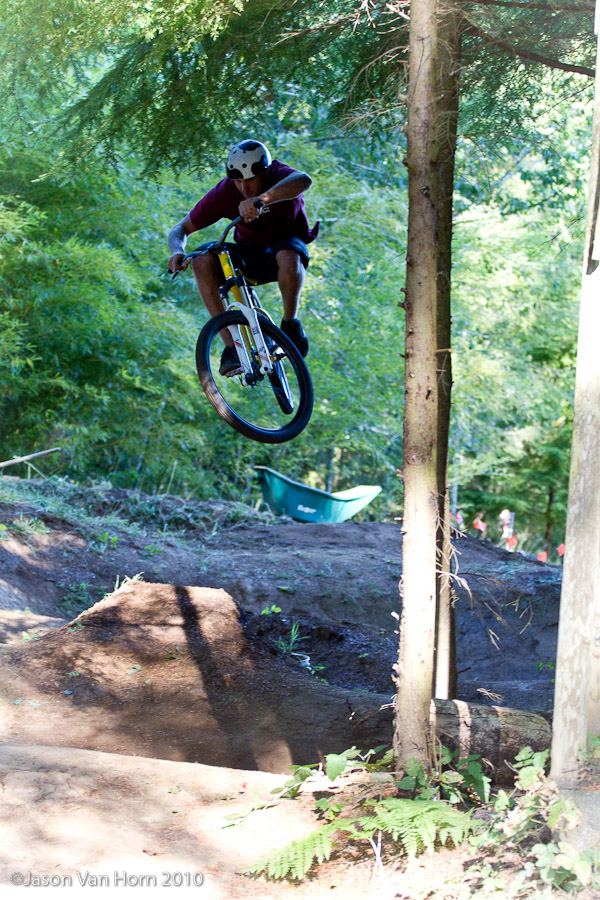 Alex guinea-pigged the double first. Adding an expert line to the pump track added some challenge- although it is a small jump, the run up and line into it makes it tricky.

That is the best part about having friends over- discovering new lines. We’ve been doing figure eights over the bowl to bowl line and airing it a bit, but after I shaved the length of the spine between the bowls, it became a gap line. 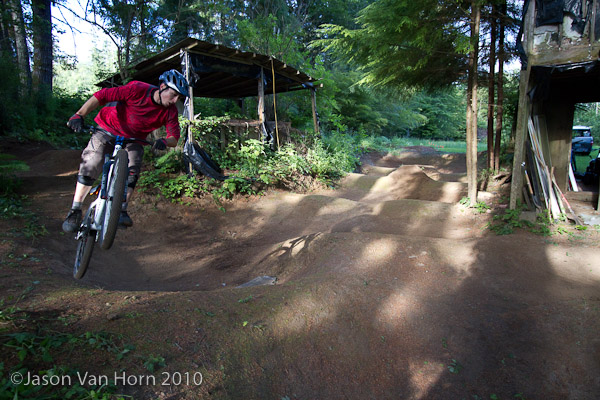 Bowl to bowl transfer option #1. As a hip. 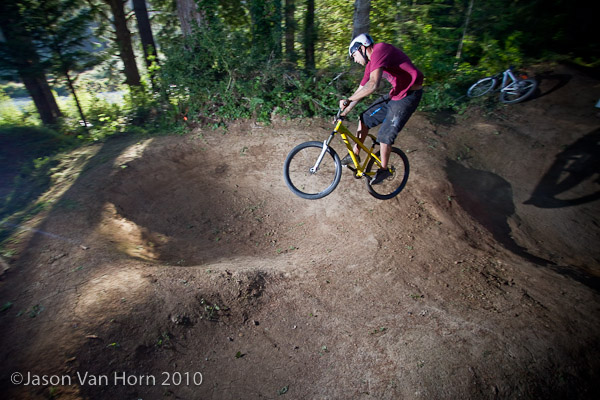 Airing the bowl to bowl has alway been fun. The tight radius makes for a technical challenge- you need to drop the shoulder and commit to your line upon landing, or plan to shoot off into the bushes. This happens frequently on the track- so much I ended up building a berm to catch riders. (inspired by our friend Eddy) Our friend Alex pioneered the bowl to bowl transfer off the spine. Carving off one bowl, you air to diving hard right into the other bowl, pulling some serious g’s in the process. 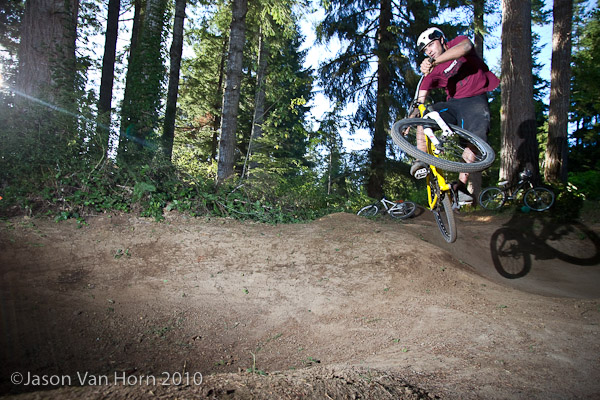 Another perspective on the bowl to bowl gap transfer line.

Although the rollers mean casing everything has low consequences, it isn’t an easy line to nail at speed. It also doesn’t mean you won’t crash. 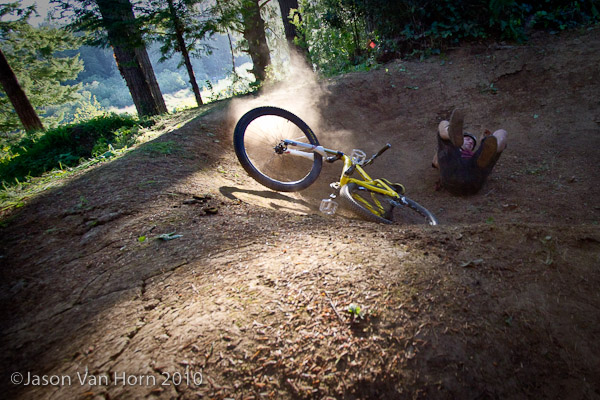 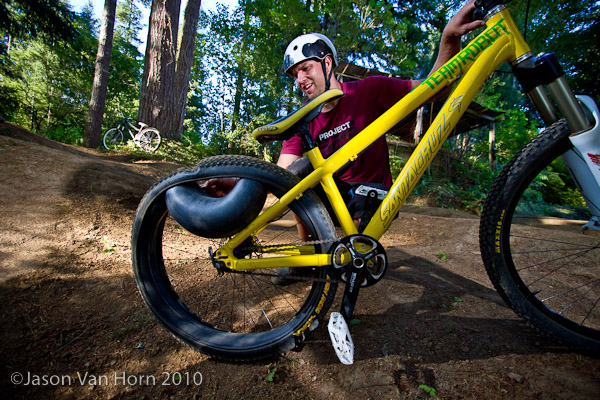 The force from the corner ripped Al’s tire right off his rim.

Al was ripping the bowl line faster than anyone to date, and his tire/rim combo couldn’t handle the forces from all that carving- the bead from his tire actually ripped off his rim. Amazingly, he would just deflate his tube, reinstall the bead, and carry on. This was the second time this happened that day.

Future upgrades to the track

While the initial plan for the backyard pump track was much more ambitious, at this point, it has been scaled down to focus on dialing the pump track, and squeezing as much radness as possible into the current layout. I was planning to construct a few wall rides, but for the time being, future upgrades will be limited to adding a s-turn/ slalom section to the top. The straight roller line will be kept as well. This should allow turn to turn hip transfer lines. Ideally the spacing will work so that advanced riders can hit it like a “jump track” line, while retaining the all around fun factor for riders less advanced. I’m also hoping to squeeze a few doubles in against the property line that can be transfered in and out of from the pump track. 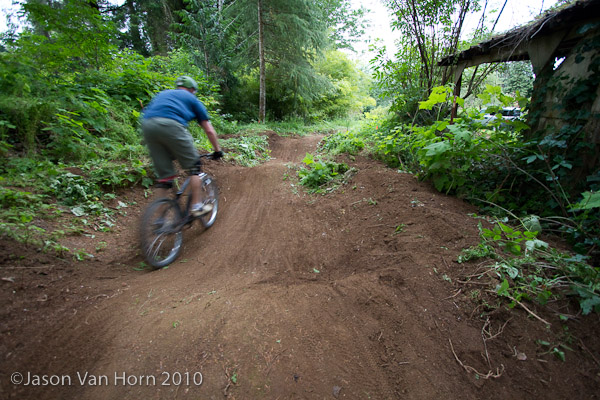 The upper straight on the top section- a work in progress. 2 to 3 days of solo digging was all it took to get this line working.