Pump tracks, backyards, bbq and beers always equal an awesome time. Sadly, it has been a while since I’ve ridden a cool pump track. While they are really popular in the northwest, I haven’t really ridden that many since coming back to the Bay Area. I’m guessing this is likely attributed to a few things: one, no one I know in the city has a backyard. (whereas I know plenty of people in the northwest that do) Two: since no one has backyards, they aren’t hanging out, drinking beers and riding bikes at their friend’s backyards and planning about their own future backyard. When you have to drop 800k for a fixer-upper in the city, it starts to add up— no backyards, no back yard fun. (aw. insert sad face here) And since the joy of the backyard pump track tends to spread virally, that pretty much explains that. If you’re a die-hard trails (in the BMX context here) rider heading into the woods to dig jumps in your secret spot, you aren’t going to f*ck around with a bunch of rollers and little berms suitable for all ages- that just is asking for your dirt paradise to get plowed, and there is a rule of secrecy that is even more necessary in an area with a massive population density.

This all leads back to where we started. The only way to get the fun backyard bike party to happen here in the bay area, short of buying land a “hella long” commute away is going to be to get them built in public spots. (which is why we’re tapped into the local bike groups in the east bay and SF, and offering what scarce spare time we currently have to push towards getting sweet bike parks built) As we’ve found, we’re not the only ones that think this way. 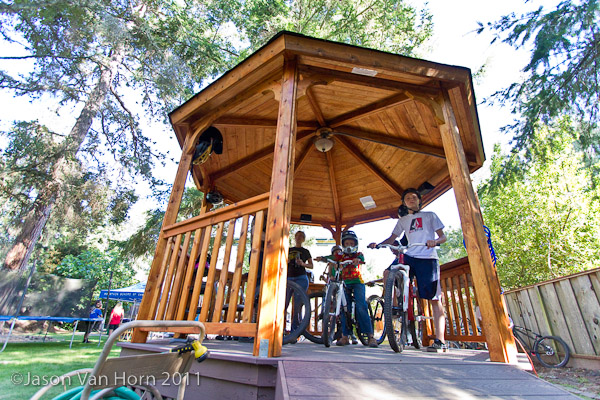 Every backyard pump track should have a starting gazebo, complete with helmet and gear storage, and water…

Recently I was lucky enough to be in Santa Cruz on the right day, and even luckier to be invited to ride this sweet new backyard pump track for its inaugural bbq. The owner of this particular backyard did his homework and went all out. Not only was the pump track planned out in far in advance, but he hired Jim Tharp, local Aptos shredder, pro rider and digger of dirt jumps to put it all together. Drainage, often an afterthought in digging, (I’m equally guilty of this one in my personal backyard experiment, and I know better) was a primary concern, as he understandably didn’t want the backyard to turn into a mud pit in the winter. (It makes it a lot easier to pitch something like this to the significant other as well.) 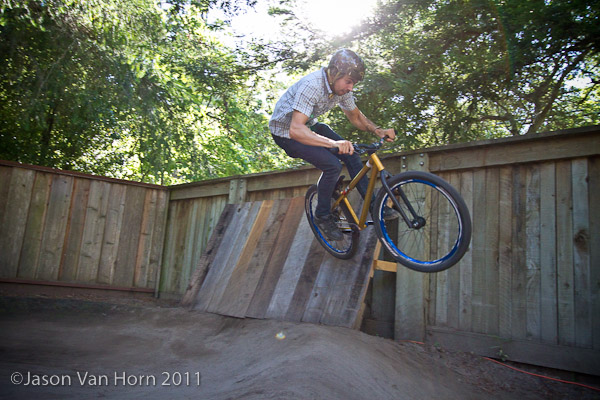 This comes straight from the source:

Re: Drainage: I was very clear at the beginning of the process that drainage is important to me. I spent a lot of money to put in this track and I don’t want a bog at the end of my property. One goal was to be able to ride the track soon after a heavy rain and we accomplished that goal. This is the part of the project that I had a lot of input and Jimi designed the track around some of my drainage plans. Some of this was trial and error, the positions of berms and rollers were adjusted slightly. At the initial walk through I sketched out a rough drainage plan and identified the water outlet and where to put the main culvert. We put a 50′ run of 4″ PVC drain pipe on a 3 degree slope along the back fence starting from the second trough. This tied into a 6″ PVC storm drain that runs along the side of our property and the two culverts are connected with a one way check valve ($90!!!!) so that storm runoff doesn’t back up into the pump track. Jimi built the track so there is a net slope towards the two drain inlets at the back of the fence. We have a couple of culverts to connect one of the inside berms and drainage pool from the large berm to the rest of the drainage channels. I personally think this drainage design is brilliant. This drainage system works amazingly well and has been tested with a few huge storm events. There are only minor puddles which can be swept out towards the drainage channels and you can ride soon afterwards. 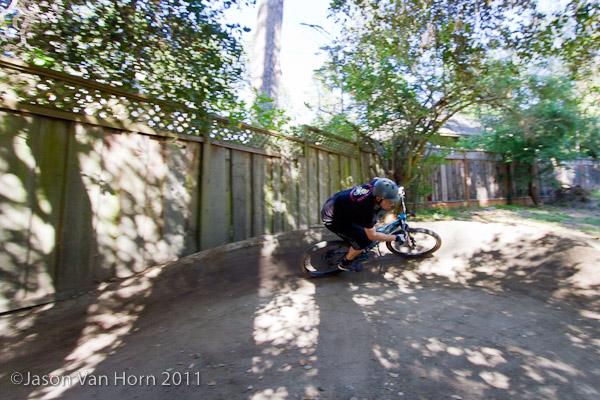 This berm gets a bit tricky at the midpoint, but if you master it, you are rewarded with enough exit speed to transfer to the inside line.

Having built a pump track from scratch, knowing the thinking that went into keeping the track ridable during the wet months is just as impressive as the actual riding experience. Of course, I’ve also become a bit of a geek when it comes to shaping dirt. Here’s a bit more on what went into the construction of this sweet backyard:

This particular track required about 10 yards of fill dirt (mostly clay) and we also brought in 5 yard of top soil. If we could do it over again, we wouldn’t have got the top soil. Expensive and too much organic material. We wanted it to cover the clay berms – which was gray/green in color – but it didn’t really stick to the clay. A lot of it has washed away and left the clay behind. The poly pave helped out a bit. The fill dirt is great but a little heavy and hard to work with when wet. I wish we could have used more of it on the track. I may get a couple yards for patching and maintenance later in the season. We used PolyPave as the hardener at the last stage and I think it works quite well. Before the PolyPave, the track would crumble upon heavy use. Yesterday was definitely the busiest that the track has seen yet it held up surprisingly well. 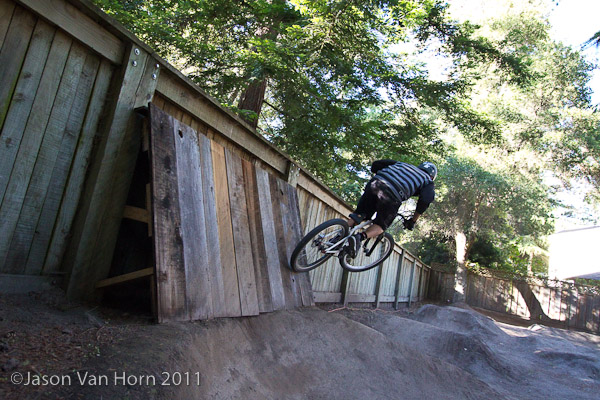 The wall ride line was super fun- the trick was to get on early and exit into the transition in order to keep momentum.

It is definitely one of the most well thought out backyard pump tracks I’ve ridden to date. We sessioned a masterfully landscaped backyard in San Diego last year, but the design of it didn’t leave much room for evolution. Being able to change up the lines and rework parts of the track is part of the fun of having a sweet backyard. If this was my yard, there are a few things I would want to tweak, but not until I had mastered every single line and transfer possible.

In the end remember, it’s all just dirt. 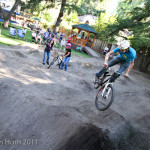 Thanks to everyone that helped in the creation of this article.

Notes: the owner has asked that his privacy be respected, so please refrain from asking the location or identity in the comments.
Additional photo assistance by Michal Gregus. We shot video too. Stay tuned, it may be edited and posted someday.