This weekend we got out and rode our bikes. This typically is the formula for any good weekend in my book, as I, make that we— pretty much revolve life around the desire to be on a bicycle. We also got our first bit of rain in a long time, something the trails sorely needed. So all things considered, it was a pretty good one.

Saturday started off at productive; Inga headed out on her road bike to work on her base, while I headed to Joaquin Miller Park to help with the Bicycle Trails Council work party  on the Cinderella Trail. There was a solid turnout, which resulted a in good amount of work being completed.

The primary focus of the day was finish work— primarily adding back slope, although the recent rains were taken advantage of, with a lot of tamping being done. One of the big complaints with the reroute was that the old line was closed off before the new section was even finished. The new route has a number of grade reversals which are essentially uphill sections on a trail known for going down. With the lack of back slope, carrying speed into many of the uphill sections meant being mindful of front tire placement. The outer edge of the trail hadn’t been compacted, and more than a few riders left their mark in the form of a divot in soft soil. 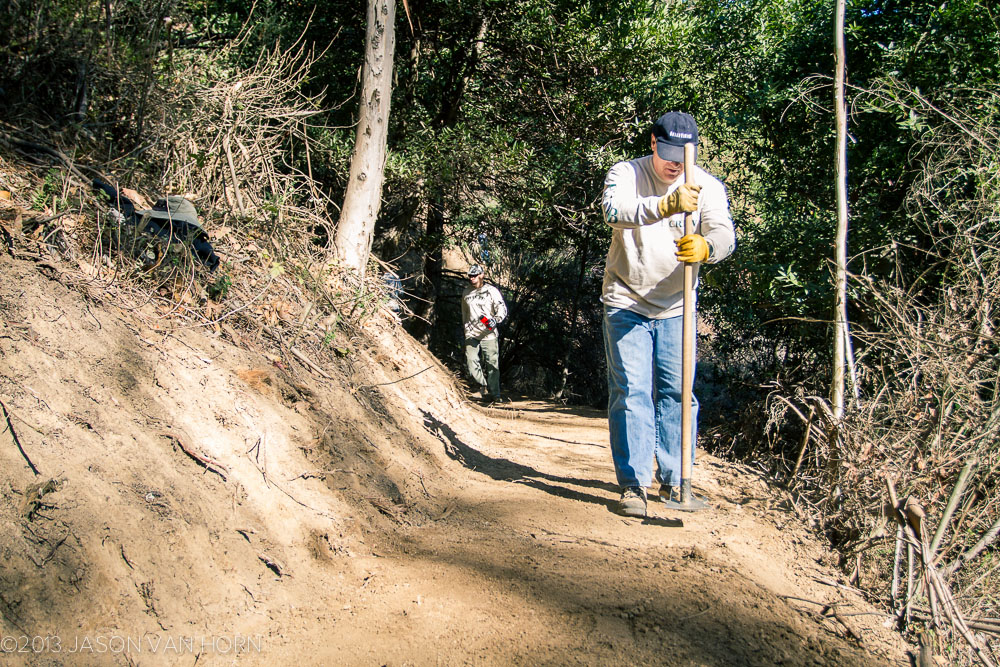 Finish work on the trail

Saturday’s work made for big improvements. Although the tread looks a bit like a highway at the moment and could benefit from rolling grade dips and additional grade reversals, post trail work runs following the build session revealed lap times to be much faster— a lot faster. Assuming my GPS is correct, (though it rarely is) I was at least 20 seconds faster down the trail. Finally having a proper amount of back slope resulted in being able to lean the bike over and carry speed and momentum through uphill sections, and for the first time I found myself really enjoying a run.

In fact, it reminded me quite a bit of a run down the DH course at Sea Otter. The length and duration is similar; take away all the sweet jumps and you’re left with a fast downhill with lots of turns, a rocky section or two and an uphill sprint. (and some ridiculously tight switch back turns at the end which have yet to be addressed)

That’s the trail now. And it ain’t shabby. 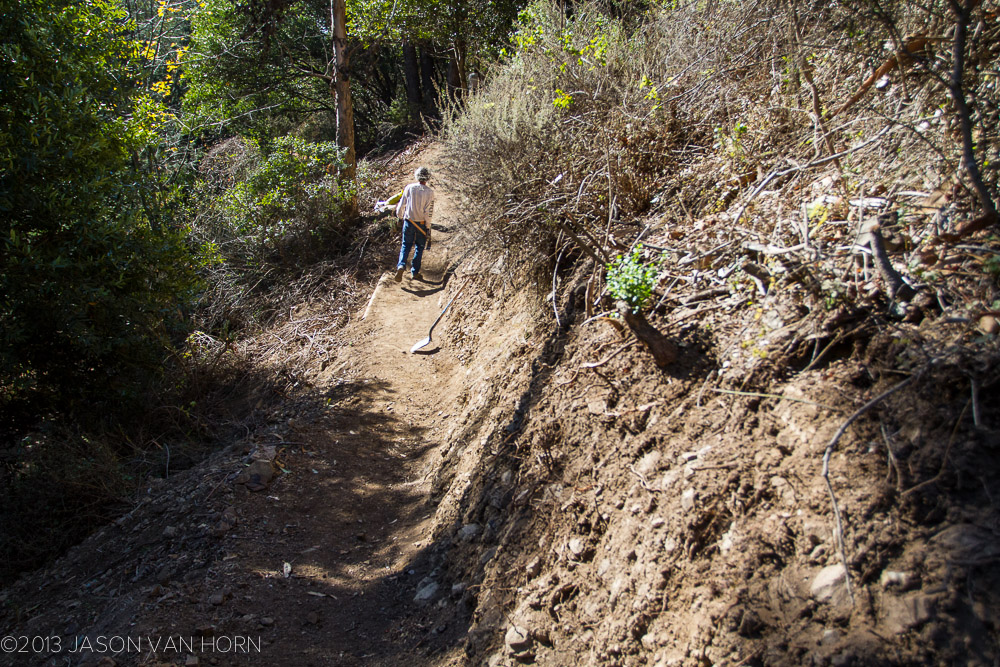 You can haul ass up this initial uphill line now, and a good sight line means you have plenty of time to slow down if needed.

For some reason there is a significant amount of resistance towards insloped turns at Joaquin Miller, a subject I hope to discuss at future opportunities. I can’t remember the last time I drove my car on a highway designed to make cars slide off, so the logic here escapes me. And flat turns just encourage drifting with riders, which could blow out the outer edge of the tread quickly.

Post trail work, I limited myself to a single cold beer, (a benefit of trail work with the BTC) and rode until the leg pump was too much before retiring to the couch. On a side note, the trail day made the paper.

Sunday we packed up and headed down to ride a private pump track near Half Moon Bay. Inga invited a few girlfriends for a what was for many, their first time riding a pump track. 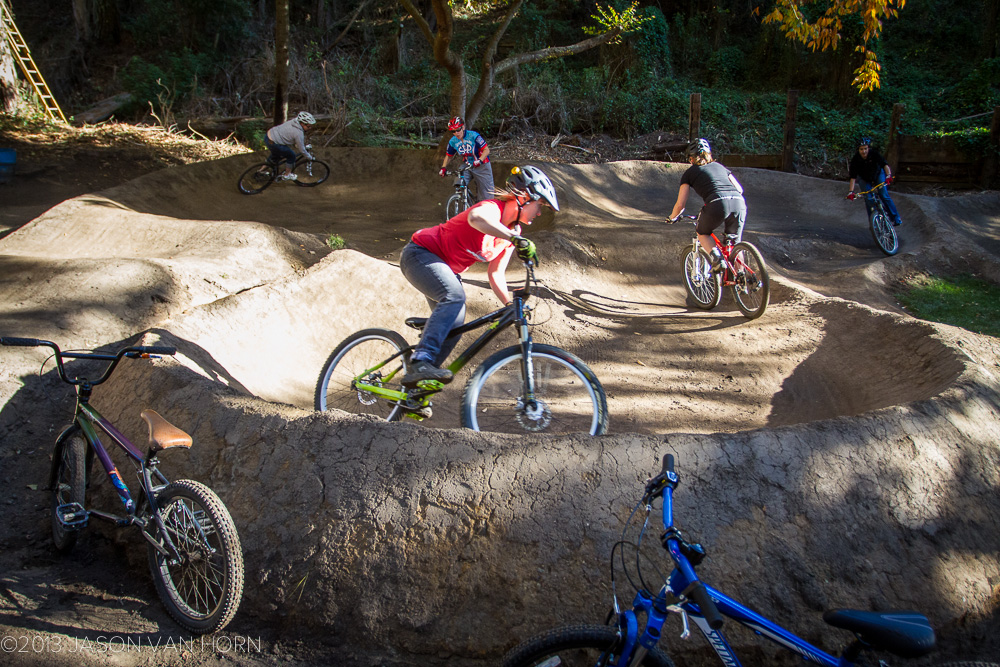 The ladies take over the track.

Of course the topic quickly became the question of where and how can they get a similar riding and learning experience without driving an hour plus?

A public pump track in the East Bay is long over due. Other than the Pleasanton Bike Park, there isn’t a legit skills progression area in the EB. Even with several proposed sites supposedly in development, this is pretty weak. I’ve lost track of how many public tracks the Santa Cruz area has now. Is it two, or three? We have the oldest bike club on the west coast. Time to get cracking, people!

Sadly, this means I should probably get cracking, since not that many others in the community are stepping up to advocate for public radness we can all participate in. The old guard is focusing on the kids, with the hope that some of them will step up to take their places. Seeing as how I am just about out of bandwidth or motivation to make this happen, I might just stick to riding my bikes in the woods on the weekend. On the upside, here’s a status report on the McLaren Bike Park, a project near and dear to us that is only a BART ride a way, and one that has taken up much of my limited free time.

In the meantime, we’re keeping our eyes and ears open for possible sites and opportunities to put one and one together closer to home. Or moving the Santa Cruz. 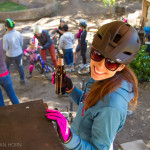 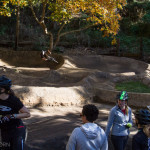 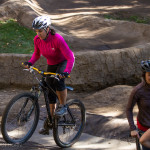 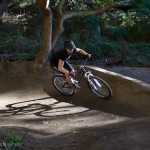 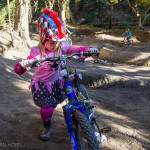 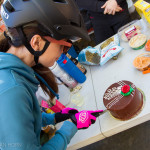 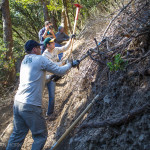 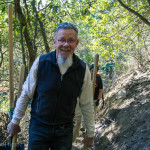 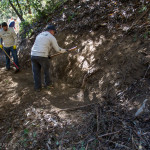 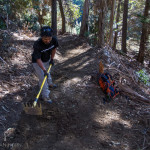 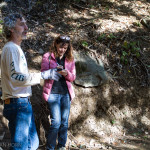 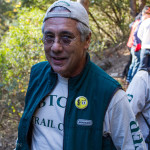 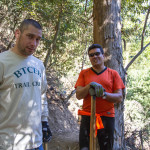