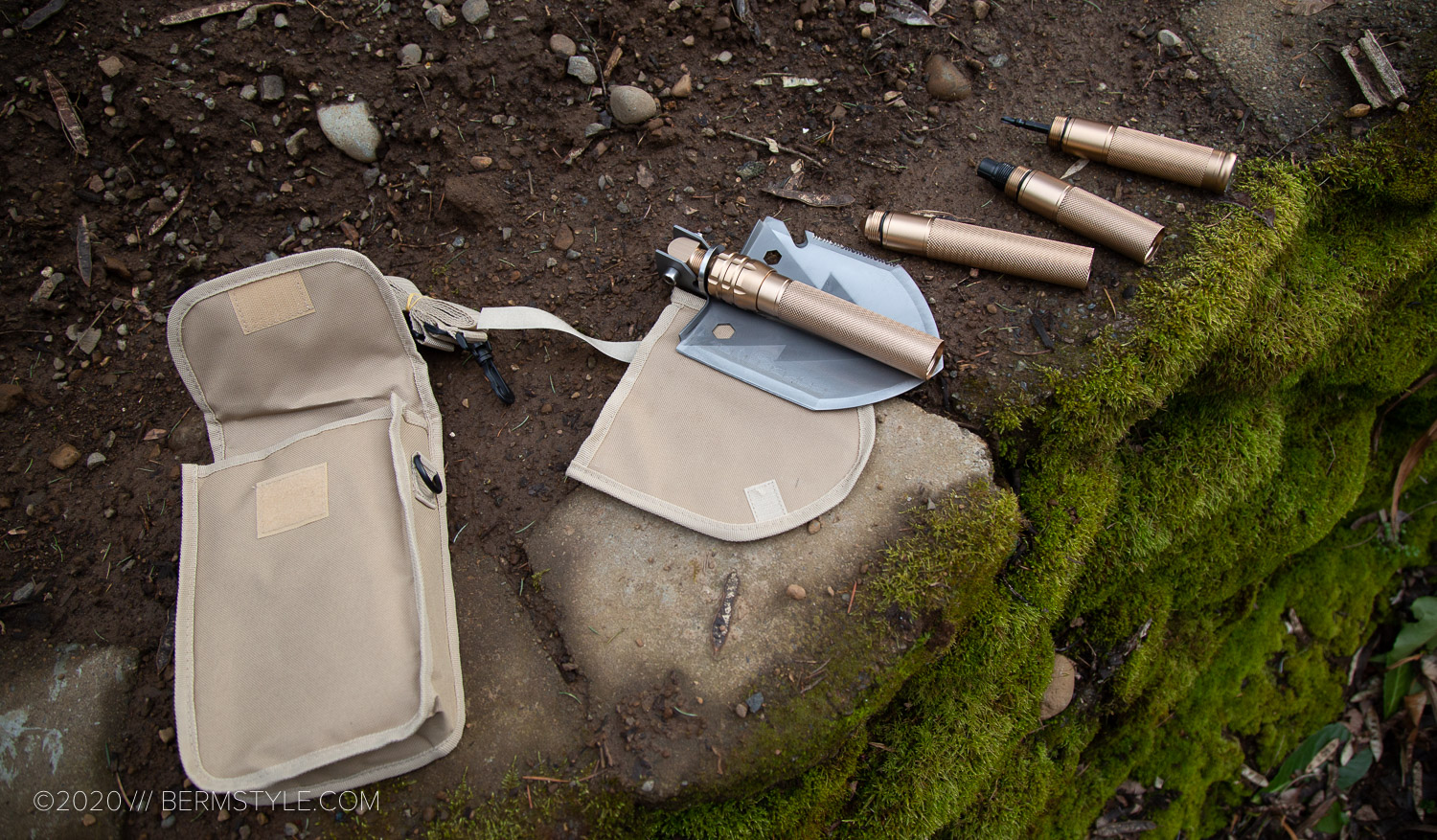 When researching modular, easy to carry folding shovels, I came across the Bacoeng 17 in 1 Folding Shovel on Amazon.com. It’s one of many modular, easy to pack survival tools available online that fit into what’s often referred to as tactical survival shovels. Their small size is designed to fit into a bug-out bag, suitable for prepping.

As such, these types of tools are packed with features, including saw edges, a sharpened edge that can be utilized as a hatchet and/ weapon in a pinch, fire-starters, and more. I was most interested in the multi-purpose shovelhead that can be rotated, transforming the modular shovel into a hoe. Survival shovels are available in a wide range of price points, but it was the inexpensive price of $30 for the BacoEng model that caught my attention. Most of these mini modular survival shovels look too small and have handles too short to be really useful but, the 29″ length seemed long enough to be useable on paper. Adding one to my cart and clicking buy, I figured I’d see if it was up to the tasks I had planned for it – portable trail maintenance. 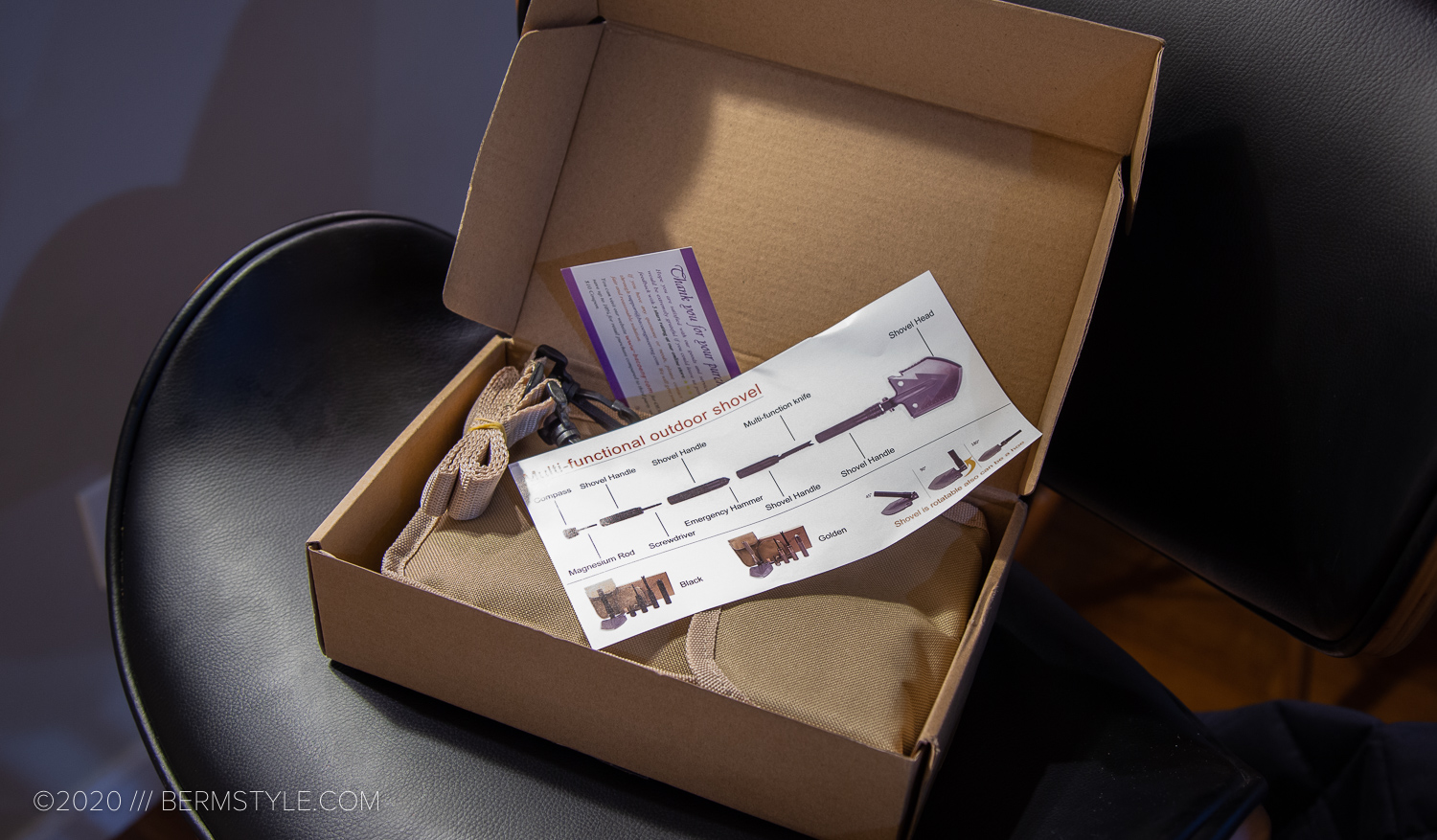 Unboxing the 17 in One Shovel.

My go-to trail building tool is a Rogue Hoe. It’s a burly tool that can move a lot of earth and for me, sets the standard when it comes to building trail. I was curious as to whether or not a modular tool half the price could come anywhere close to being as useful.

The package the Bacoeng Survival Shovel comes in is surprisingly small. The tool arrived packed into a bag and with a protective cover for the shovelhead, making it easy to carry. The overall package is small enough to fit almost any hydration pack for carrying. 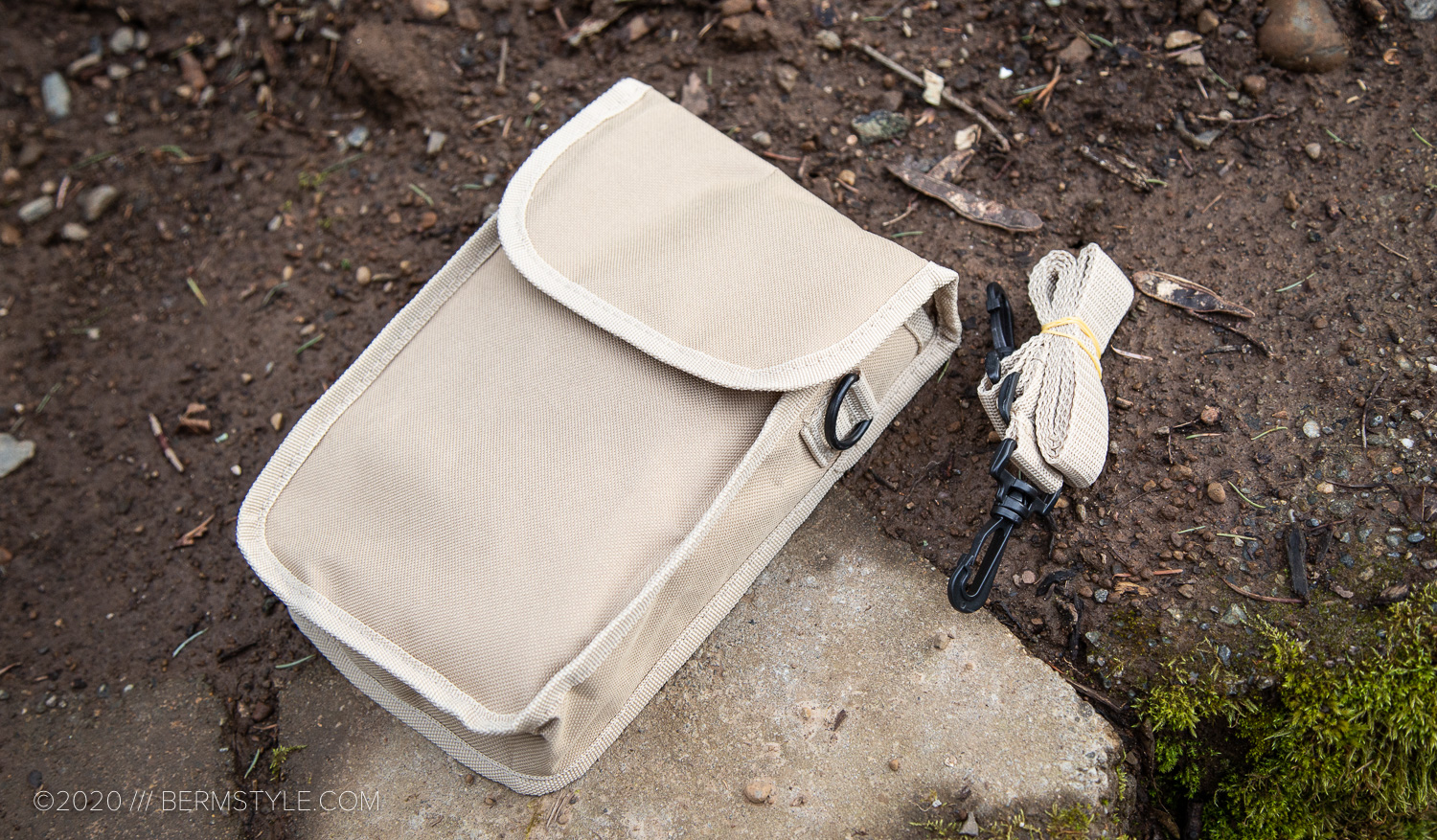 The small form factor makes the Survival Shovel easy to fit into a bugout pack.

Portability clearly was the priority in the design of the product, otherwise, it would have been scaled up at least 15-25%. It’s somewhat obvious immediately that usability played second fiddle to the compact size and form factor. 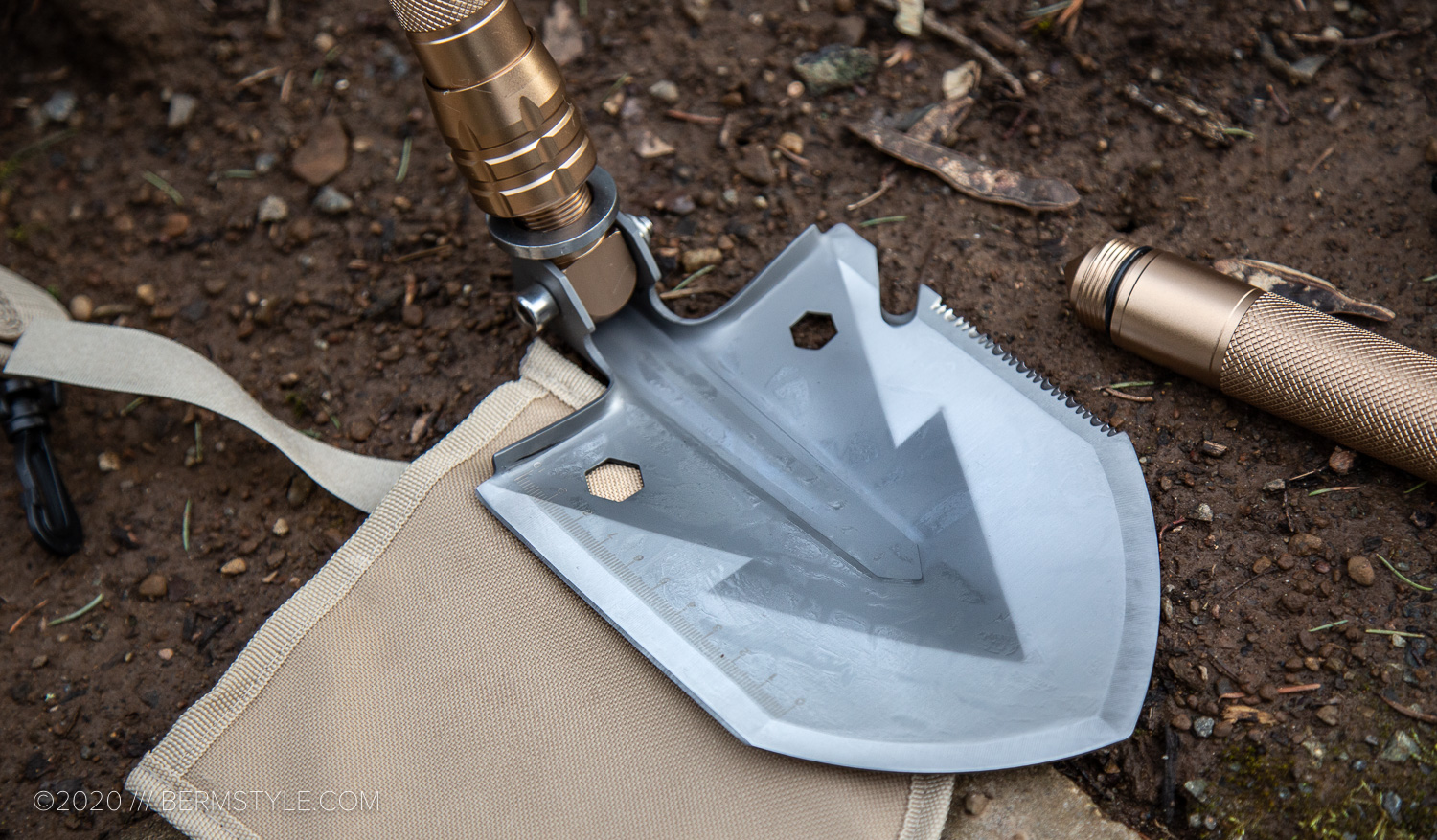 The saw edge is almost too short to be useful but would be better than nothing in a pinch.

That said, a lot of our local trails in the winter feature soft soils, and a small tool capable of handling small tasks like fixing drainage could be of value to riders. This time of year I will often carry a set of clippers and a small folding saw on our close to home secret trails to keep them passable. Even if the survival shovel wasn’t the tool for serious trail work, it could still be of use. 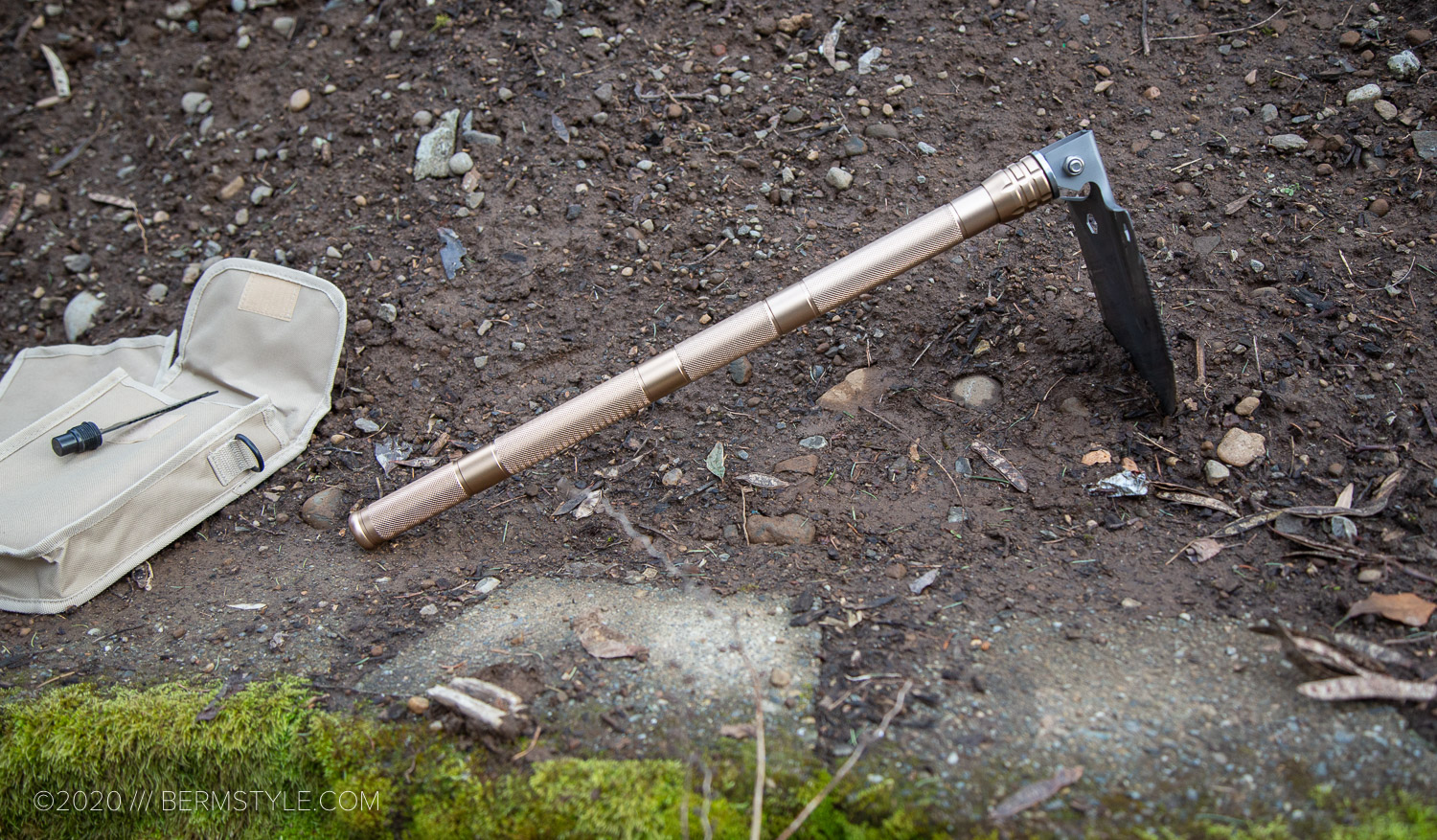 Set as a hoe, the portable shovel could easily clear a campsite.

The folding head feature is well implemented. The locking ring felt secure upon tightening it down, and in use, the shovel’s edge easily dug in. As a shovel, it reminds me of those mini-shovels we took camping in the Boy Scouts. Useful for digging out a fire pit, hammering tent stakes and digging a latrine. 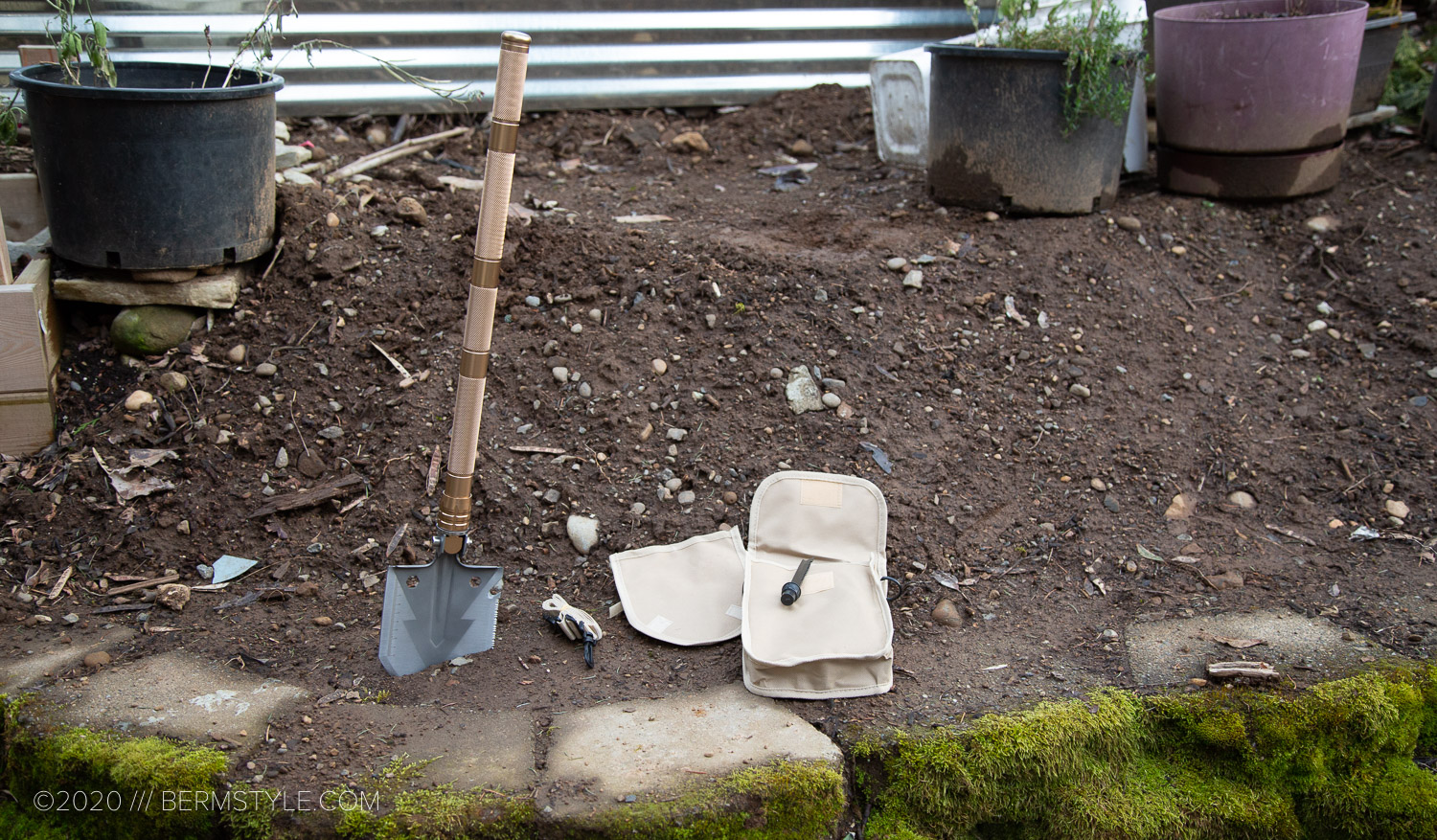 As a portable tool, the folding shovel could be quite useful.

It is easily capable of small jobs, and if I was stuck in the snow, it could be useful in digging my vehicle out.

That handle is really short though. It feels like using a hatchet in terms of its length. If you were looking to do a quick drainage fix on a winter mountain bike ride, it could have some use. 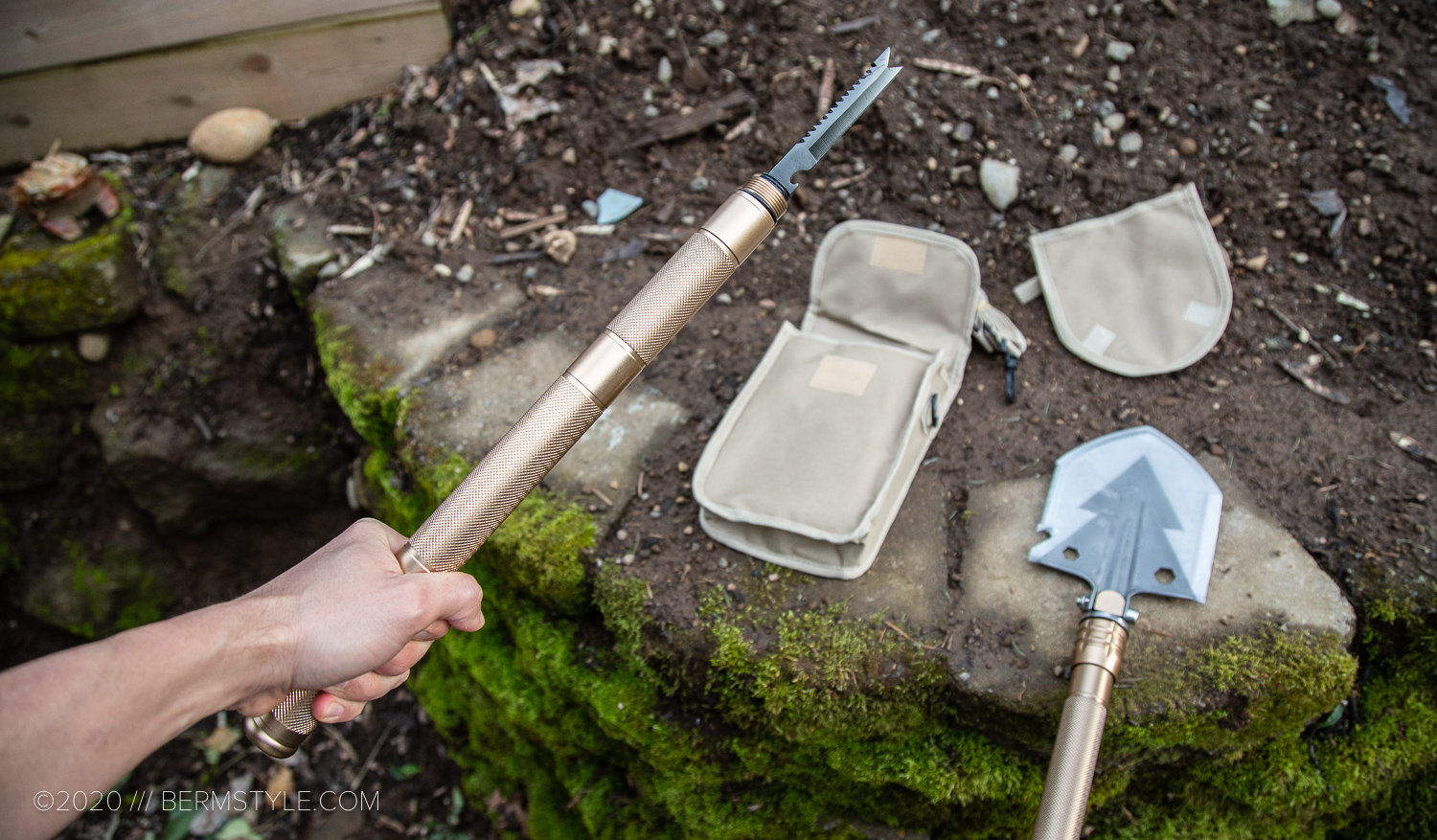 There are a number of other “survival-style” tools integrated into the shovel. Most of them all scaled down too small to be useful in regular use, but if you didn’t have anything else you’d be thankful to have it..

I ended up emailing the manufacturer and suggested making a version of this took that simply scaled up the sizing 20-30%. It could be significantly bigger and still fit into a backpack. That tool would be legitimately useful.

Of course, they’d have to make a few thousand to be profitable. Leo at Baco Engineering let me know they believed the demand for this shovel to be very small. The only way to get one would be to order thousands.

I had one more idea for making the tool useful though: what about ordering additional extensions for the tool? The cost of having the modular pieces was also cost-prohibitive, as they’d be coming from the factory, which is likely in Taiwan or China. Shipping alone would be $15, or half the price of the tool. So I ordered a second tool to test this theory. 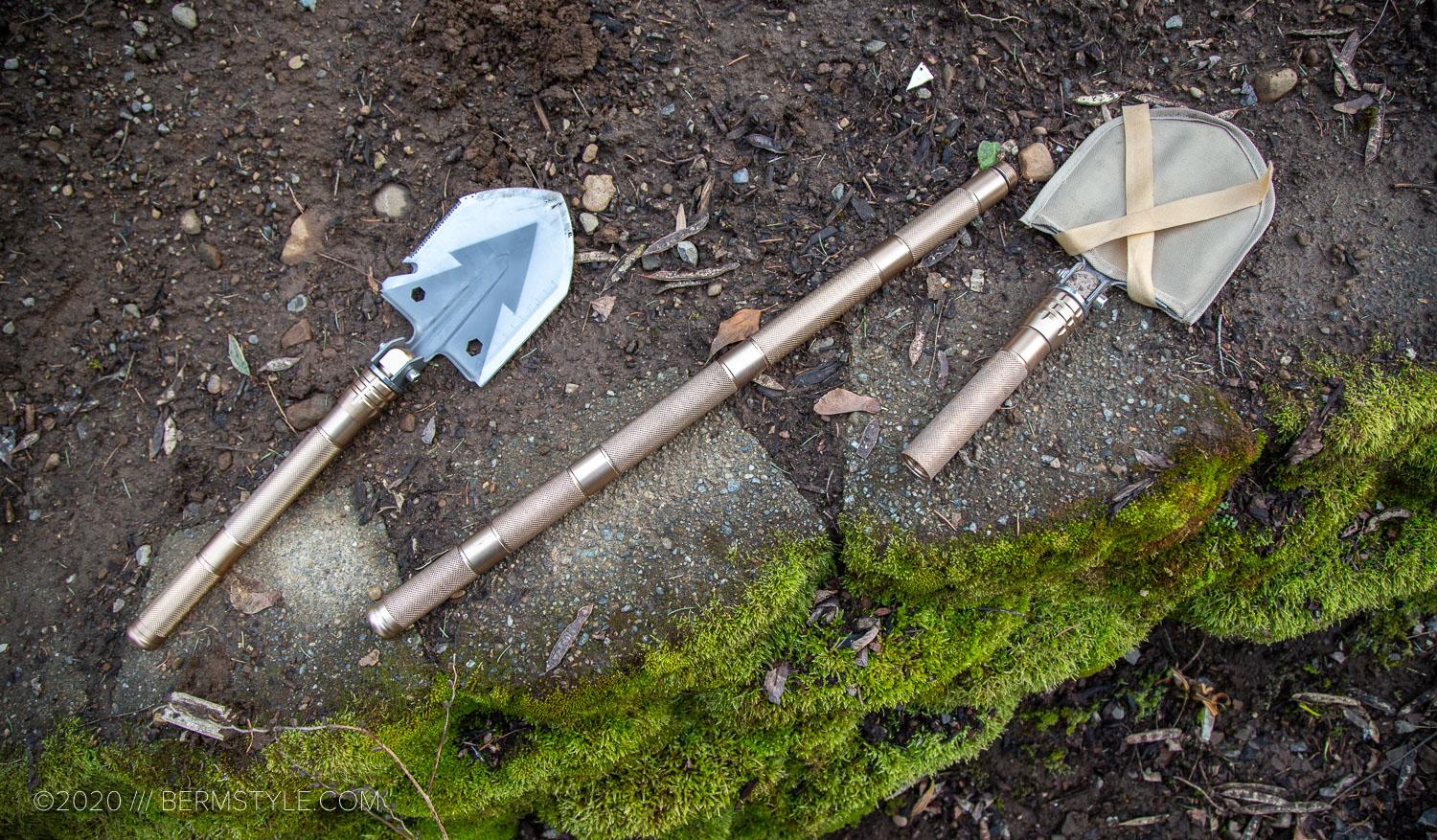 … and now I have two of these things.

Into the rabbit hole I go.

Now I’m invested.. the second tool arrived and it was time to see if a budget modular trail building tool could do the job required of it.

Threading the additional sections in, I now had a $60 modular, portable trail building tool. I separated it into two halves and stashed the newly enhanced tool in a hydration pack, while the smaller, barely useable left-over pieces got stashed in my vehicle. If I ever needed it, it would be better than nothing right? (provided I could find it, that package is quite small.) 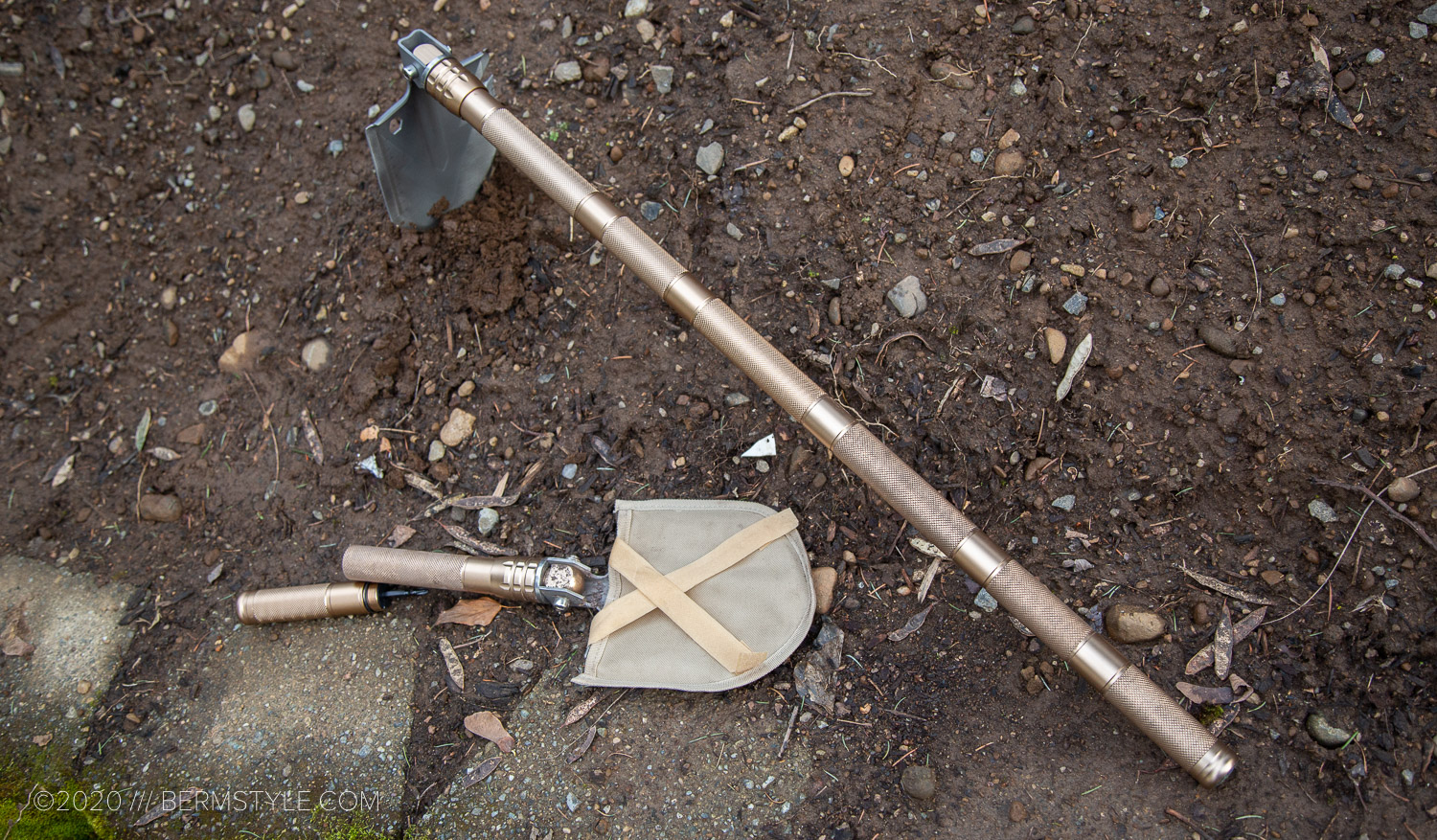 Utilizing segments from a second shovel the tool is a lot easier to use for trail work applications.

Headed to the local trail to do a bit of maintance, my thoughts were.. at least its portable.

It’s a somewhat useable shovel. But even though I now had some actual leverage, there’s still barely enough room to put weight on the small shovel head. But for scooping, it can do the job. It would more than surfice for emergency and camping situations though, and as that is its prmary function, that’s logical.

As a hoe, it actually chops into the dirt well, as the edge is decently sharp. I have a feeling the edge wouldn’t hold up in rocky terrain though. If I was taking this tool into a prepper situation I’d want a few files and sharpeners.

Having used it a few times, I’ve since migrated back to carrying tools like a Pulaski or Rogue Hoe for trail work. Investing in a sheath for the blades went a long way towards carrying a trail tool, and I’m able to pedal a few miles in easily enough. 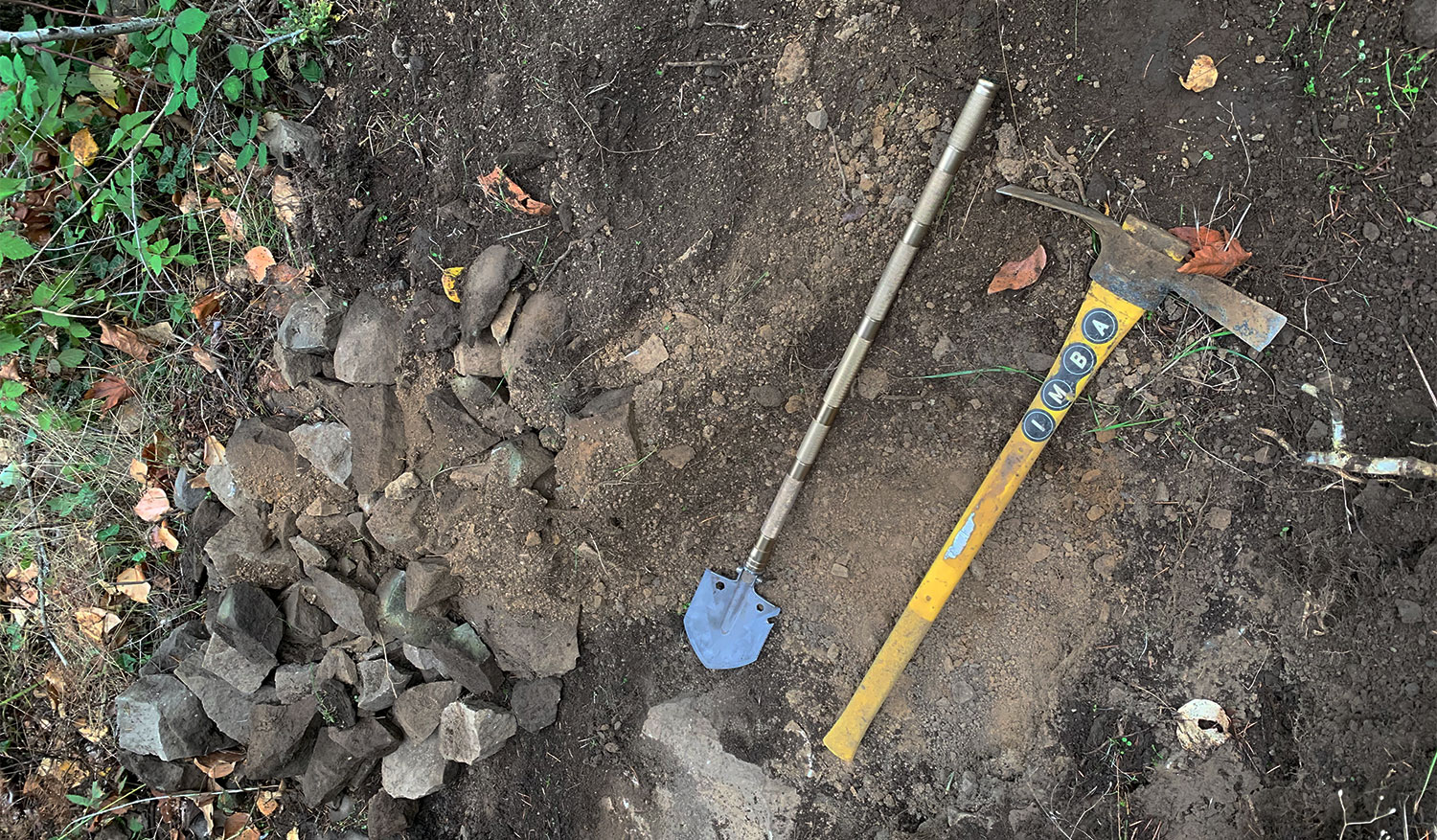 For comparison, here’s the lengthened survival shovel next to a light mattock.

Although I’ve found the hacked survival shovel less preferable than a dedicated fireline tool, the portable tool does have use, and I’ve added it to my bug out kit. That said, for minor — say, less than an hour or two – trail repairs, it is useful, considering it can be easily carried in a hydration pack without compromising the riding experience.

When it comes to easily portable, modular trail building tools, the Trail Boss Packable trail tool has risen to the top as the best-regarded tool available for trail builders. The downside is that sticker price – $235 is a lot to swallow for someone looking for a bit of convenience in carrying tools to the worksite. In comparison, $60 really isn’t a bad option.

The BacoEng 17 in 1 folding shovel sells for $30 on Amazon.com.
(purchases made using this link will go towards supporting this website.)