Southern California doesn’t often come up when discussion turns to riding destinations, but with a year long riding season, the sandy lands down south begin to have major appeal when the northwest soil turns to mud. After spending over a month in So-Cal house sitting, hanging out in the area and getting some riding time in, I began to start getting a feel for the riding scene down there- especially after RC of Mountain Bike Action fame passed me some numbers for riding contacts.

When first I landed in the outskirts Inland Empire, (the area outside of Los Angeles) I stopped by a local bike shop to get the scoop on the local riding scene. In car culture where a vehicle is a requirement, we weren’t seeing a lot of cyclists out and about. They turned me on to a website created by local riders that listed a number of riding spots, as well as group rides. One spot in particular, Sycamore Rocks, looked pretty sweet, and from the trail descriptions, had some rocky descents that looked to be right up my alley. However, when I first headed out to explore the area solo, all I found were random trails and dirt roads heading off in every direction. 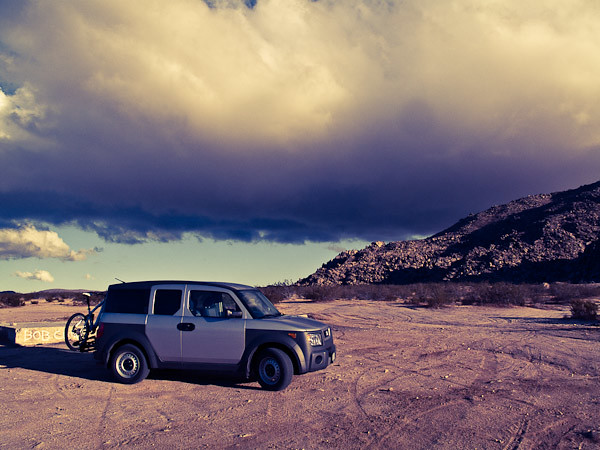 Parking at the slab

And then while riding some trails in the valley, a crash on the DH bike left me with a dislocated shoulder forcing me off the bike for a few weeks. When my shoulder felt stable enough to get back on the saddle for some XC riding, I joined Eddy and his group of riders on their after work rides in the high plains desert on the out skirts of the area known as the Inner Empire. For our first ride we revisited Sycamore Rocks, and they guys showed me the goods. It turns out I missed the good stuff by only 50 feet or so. 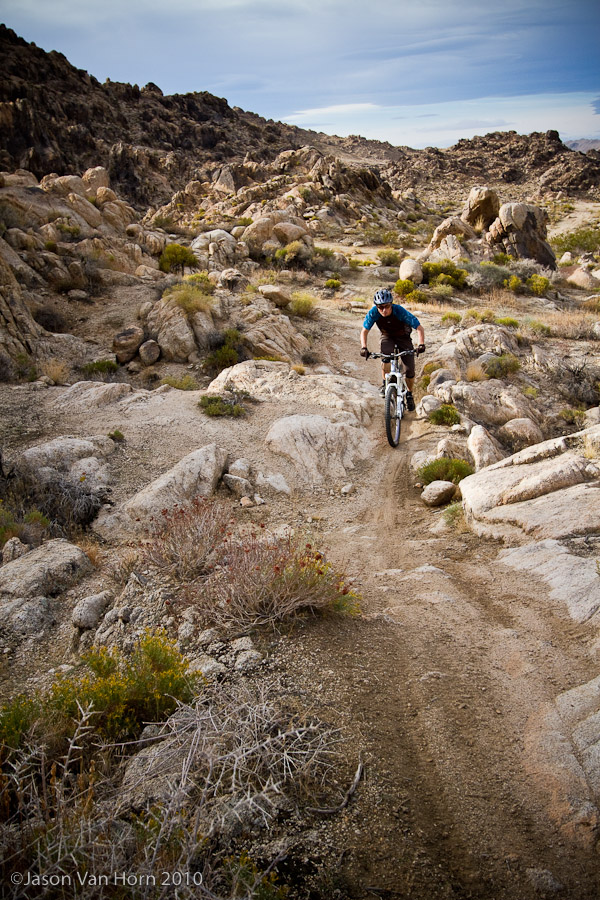 The ride starts off in an area that has quite a few users. A lot of the trails are double track, as motorized users have a big impact on the area. From the main parking area, routes splinter off in every direction. The area is barely managed by local land agencies, and local trail builders have the freedom to build whatever they want. However, trail building in the desert is a lot different from trail building in the northwest. Once a route is ridden a few times, a trail appears. The desert takes years to rehab itself and return to an untouched state. Because of this, the trails built by local riders in this area wind and twist around rocky points of interest in order to lesson the appeal to motos. (once motorized users start riding a track it quickly transforms from a narrow single track into a road) However, once away from the area used by the motorized users, the good stuff appears. 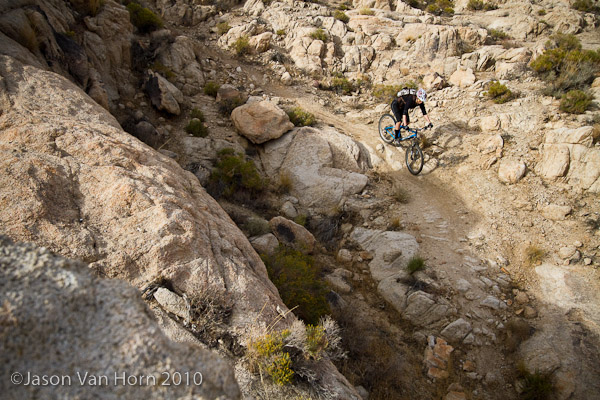 Inga rolls through a choice section of trail

The only drawback to the riding here? The good stuff goes by way too fast. Our favorite section of trail, called “God’s Country” by the locals, was beyond sweet. If this section of trail extended another 10 miles it would be a seriously epic trail for the books. Also, everything is completely off the map. If you head out to ride this trail, I recommend riding with a local. Even after I had been out to the area 2 or 3 times, I had trouble finding some of the sections I rode with the group. Our favorite section of trail

Thanks and shout out to the local riders, Eddie and company for the good times and the guided tours. 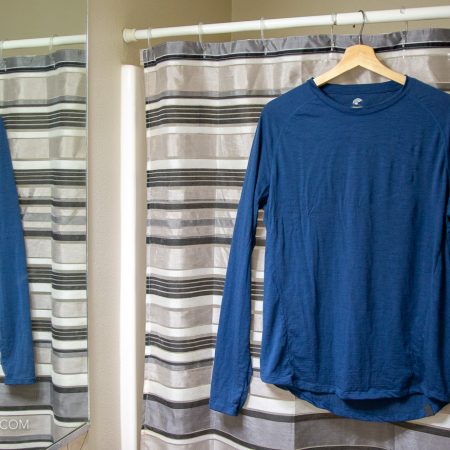