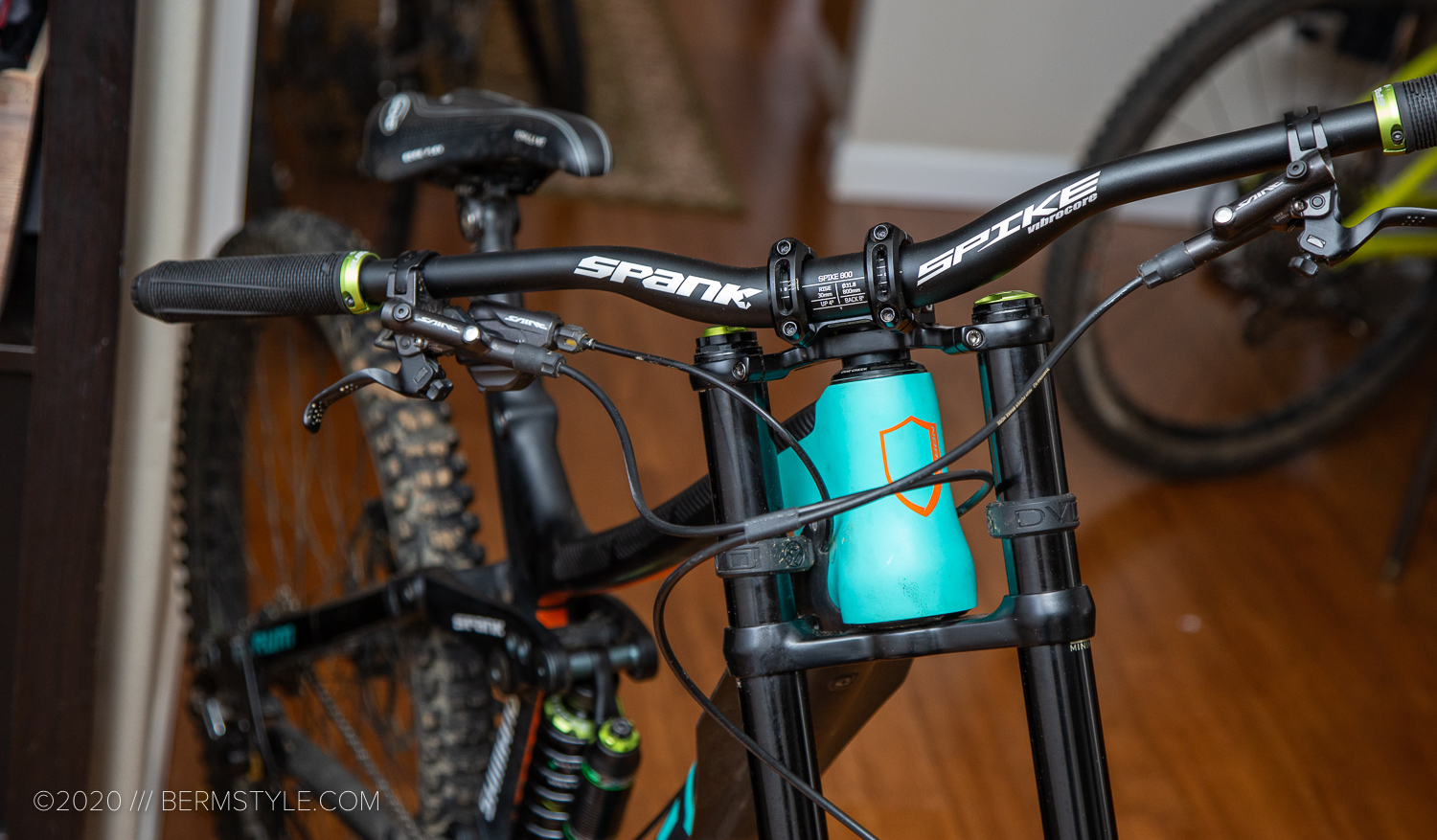 My downhill bike is one of my favorite bikes to ride. While I don’t ride it as often as my other bikes, it has received considerably more attention than most of them this year, getting a complete rebuild this winter. One of the highlights of the build is a new cockpit featuring a limited edition components from Spank Industries. 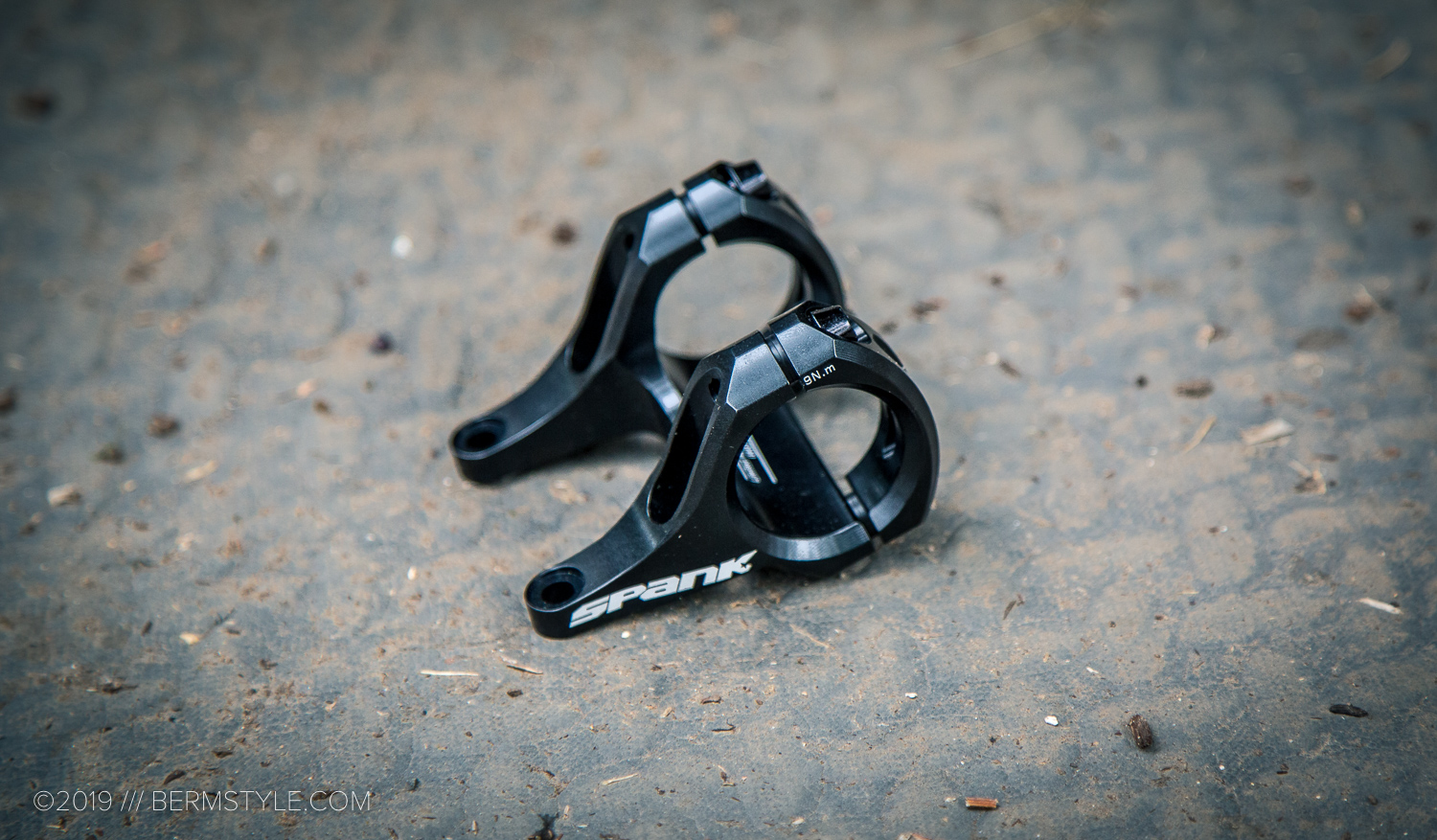 The Spank Limited World Cup Edition Direct Mount Stem was made in a limited production run of only 100 pieces. Designed to Amaury Pierron’s specifications for the 2018 UCI DH World Cup Series, the limited edition stem is 100% Full CNC, 7 series alloy. Included spacers allow for a seamless height adjustment that looks super clean installed on the bike.

Knowing I’d lose these spacers almost immediately (I swear my garage is filled with mini-black holes that swallow up parts, only to be rediscovered periodically) I installed them with the stem off the bat. I like a taller cockpit anyway, as it helps to facilitate lifting up the front of the bike. 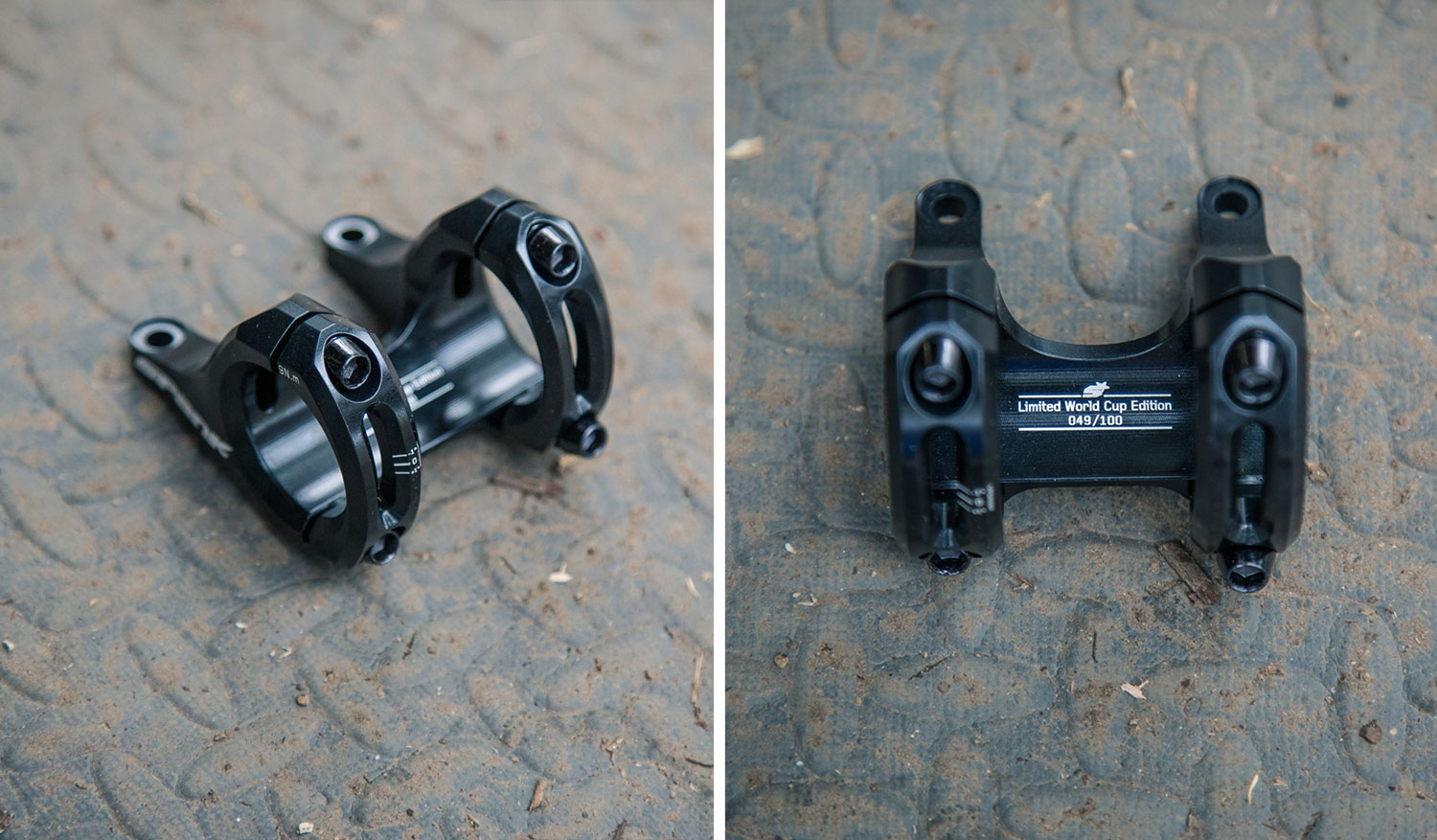 Features AKA the 411 (via Spank Industries) 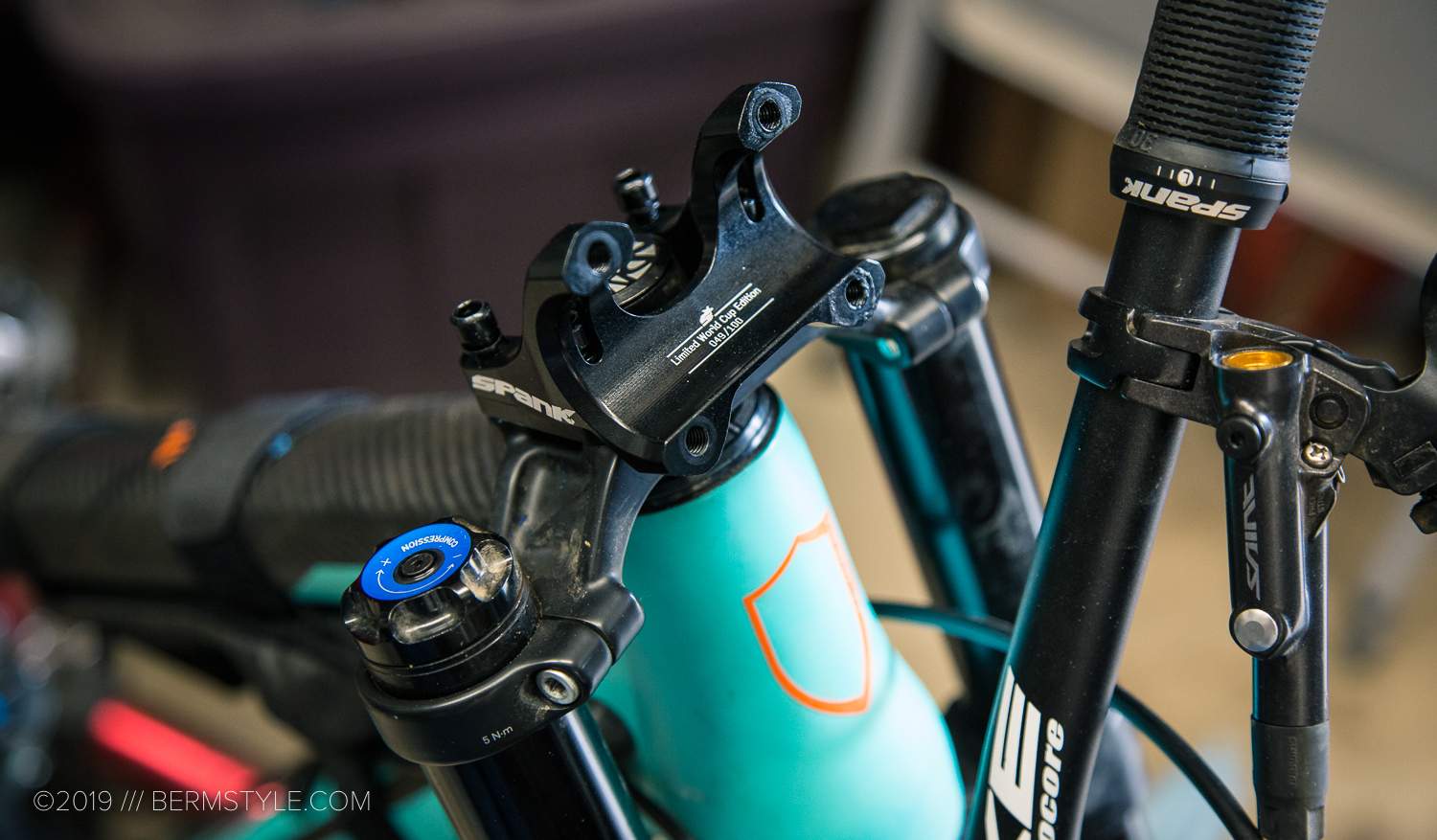 When it comes to my gear, I’m overly fond of samples, prototypes, and limited edition pieces. So much so that we have several handbuilt bikes hanging in our garage — there’s something special about riding a piece of gear you can’t just buy at the local bike shop. So I was even more stoked to pair the limited edition stem with an actual piece of unobtainium – a limited edition Spank Spike 800 Vibrocore handlebar. 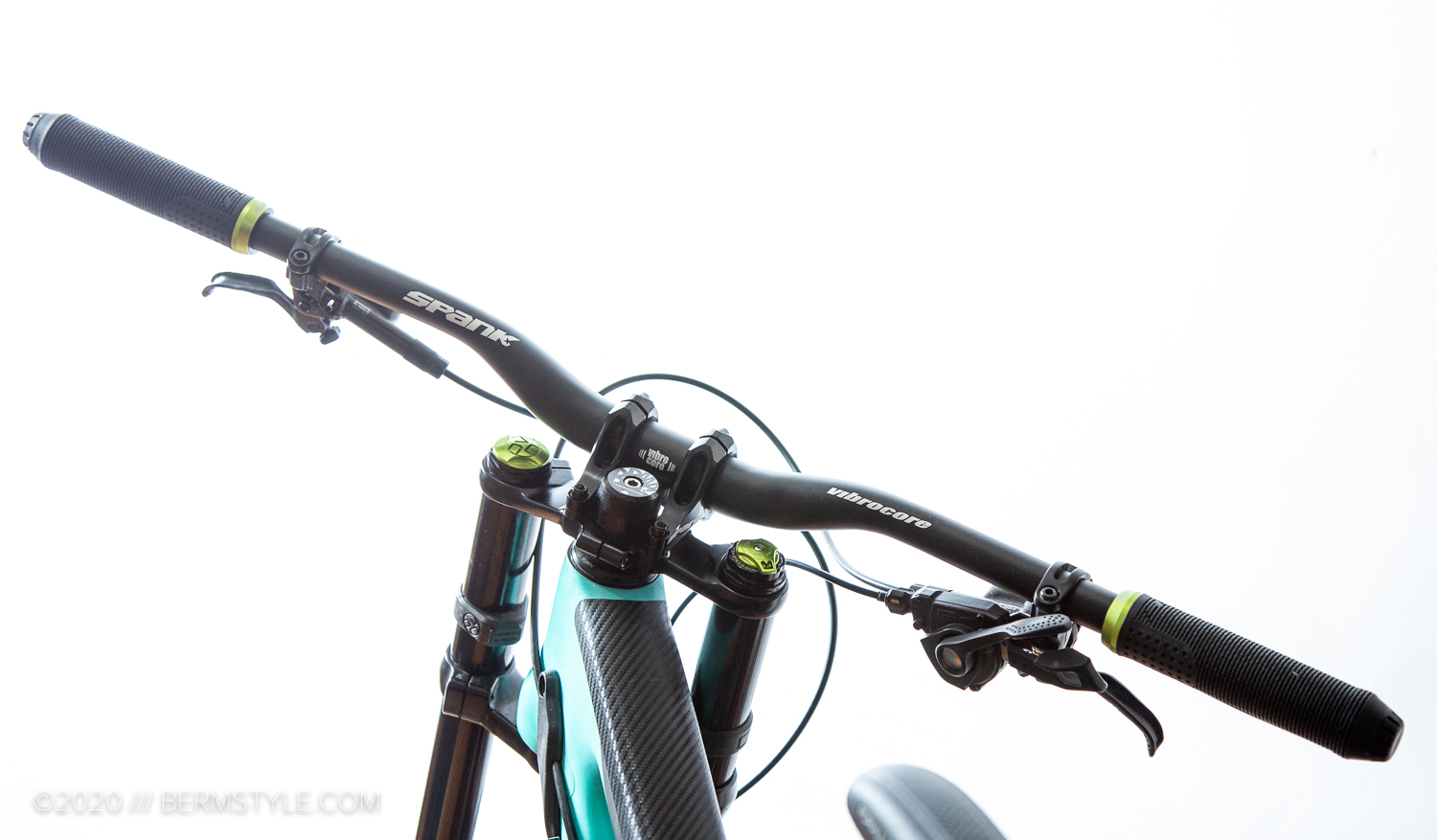 The differences in this iteration of the Spike 800 bar are primarily aesthetic. For the most part, it’s the same as the existing 30mm rise bar, but the branding and how it is applied is slightly different, with an etched silver finish instead of the white. Part of a batch of handlebars intented for distribution to team riders, it features branding placed on the rider side of the bar in order to be viewable by a GoPro or POV camera. I’m a bit fan of the finish and it looks super nice, but I’ll admit my favorite bit is knowing there are only a handful of the bars out there.

How’d I get it? Disclaimer, at my day job I’m part of the marketing team working for Spank Industries and IXS Sports. You won’t see product reviews (from me personally, though I’m happy to share my experiences) on the gear as that could present some ethical qualms, but having learned everything I have about the two brands, the products, as well as Spank’s approach to low waste manufacturing, I can say its impressive what the small team has accomplished, and the products are all top rate.

Learn more at Spank-Ind.com or Shop for Spank products at our Retail Partner JensonUSA

Maybe Carbon Parts Aren’t All Good? (Sorry to be a buzzkill)

Spank Industries holds a strong position against the use of carbon fiber in the products, and having learned behind the scenes information regarding all the waste produced in the manufacturing of carbon fiber products has really changed my perspective on the bike industry.

There’s a term I became aware of recently that is particularly disturbing: “ocean fill”. Often waste — carbon and plastic — from manufacturing in China is dumped into neighboring rivers, which go directly into the ocean, and into the food chain.

In the last few years I’ve read up and became aware of the sheer amount of pre-consumer waste that occurs behind the scenes. While the apparel industry is the worst offender, it is disturbing how much in general is thrown away. Most consumers don’t give it a second thought but if you are willing to go down the rabbit hole and educate yourself on the subject, it might give you a new perspective on the next time you buy anything disposable.

On the other hand, alloy bars and rims can easily be recycled. It’s food for thought. 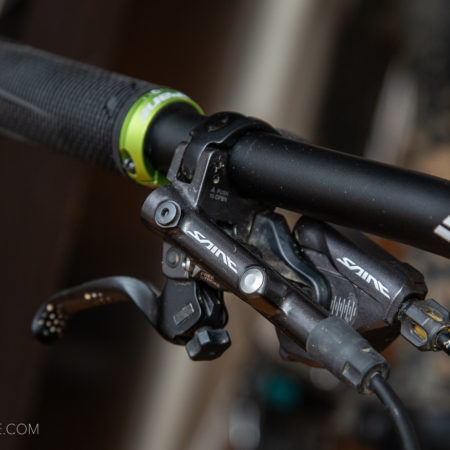