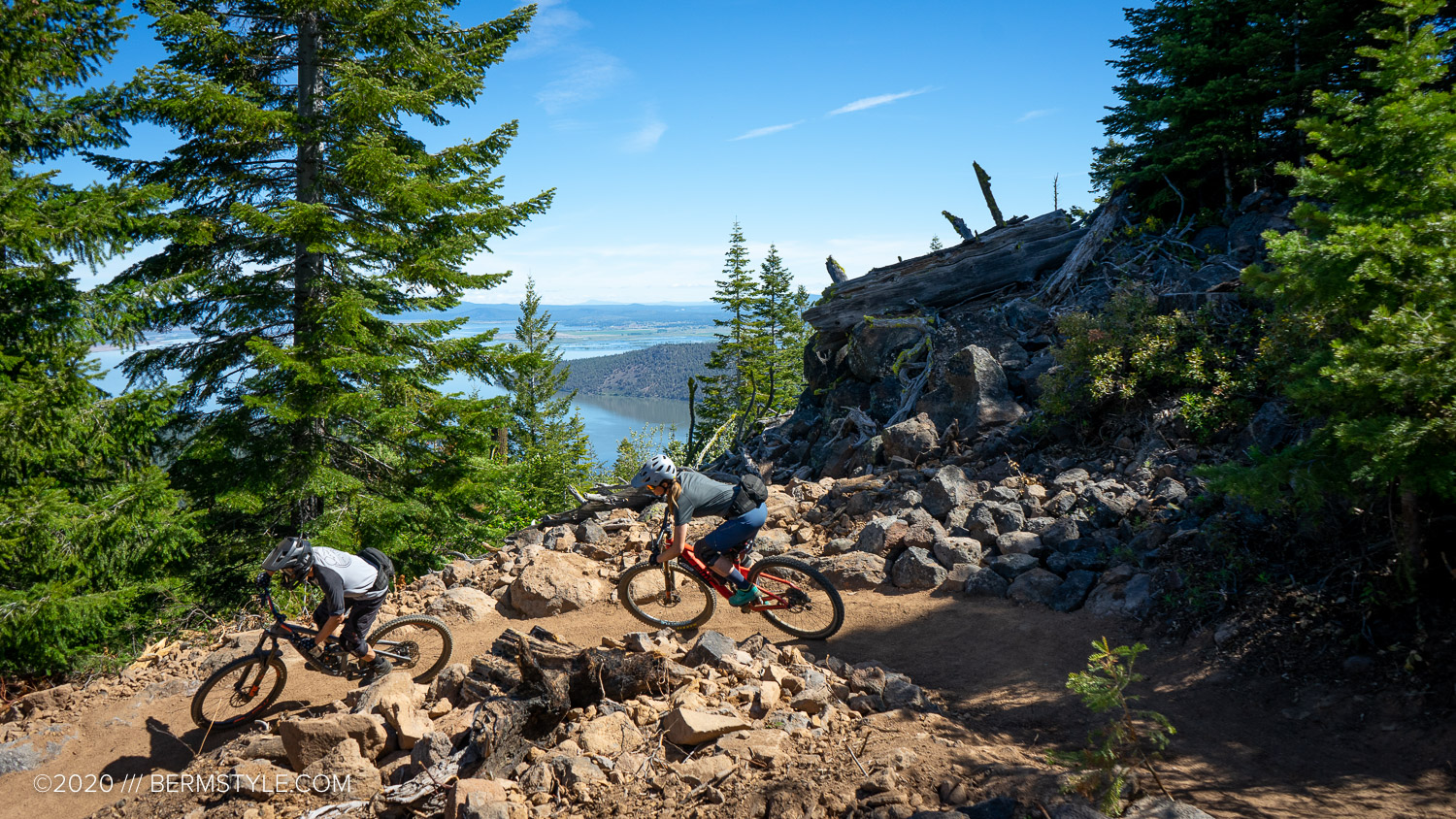 It’s hard to believe that the trail system at Spence Mountain has only been around for a couple of years. When we first visited the Spence Mountain trails (just outside of Klamath Falls, Oregon) in 2017, there were maybe 15 miles of trail to ride. We were impressed with the quality of the mountain biking experience, the terrain, and lakeside views, but 15 miles of trail doesn’t exactly make for a mountain biking destination.

It’s definitely not the case now; in just a few short years, the amount of available trail has more than doubled.

Since our initial visit, we’ve been keeping tabs on the emerging trail network. Recognizing the economic benefit of mountain bike trail tourism, Klamath County and local bike advocates have been continuing to advocate for expanding the network of trails, and it’s been exciting to watch the progress each year on the Dirt Mechanics Instagram feed, as they’ve returned each spring to expand the trail offerings, adding new trails and even more diverse riding experiences for mountain bikers of all skill and fitness levels. 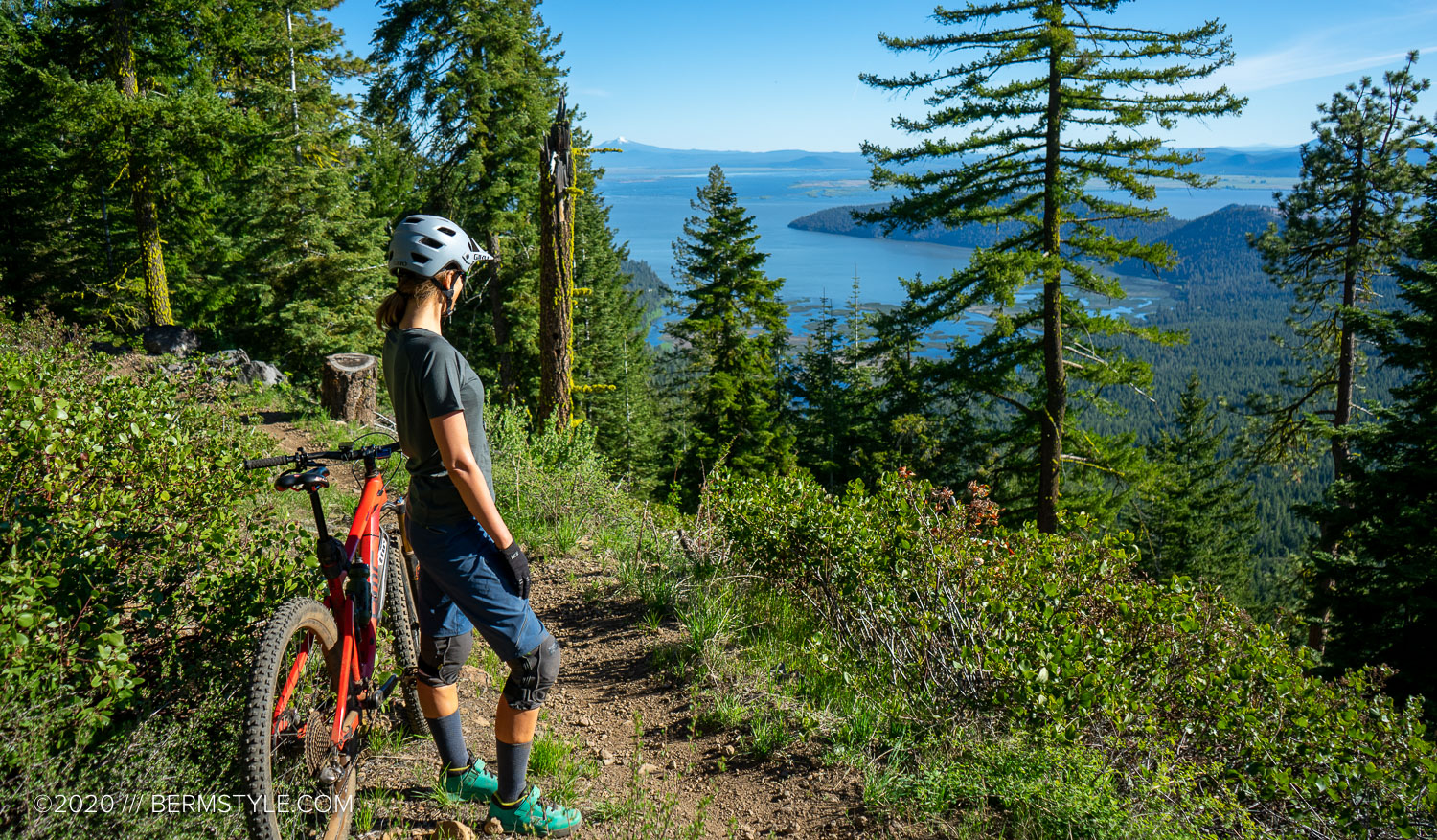 With quarantine restrictions lifting throughout the state, we were ready to get out of town and back to riding bikes. Ever cautious, we planned ahead and loaded our van with a week’s worth of provisions. Other than fuel stops, we avoided going out in public. 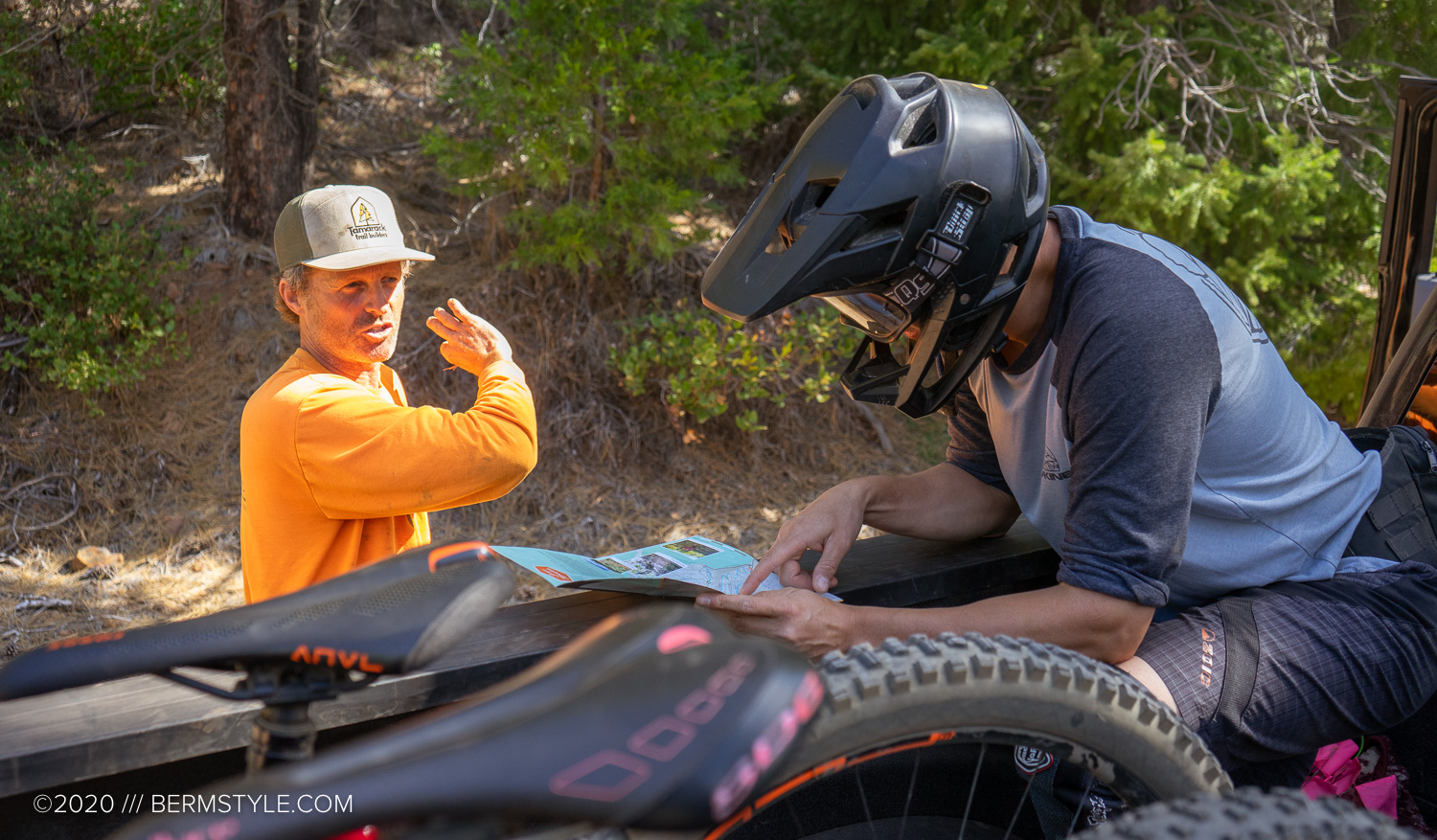 Getting the 411 on new trail construction

After seeing a recent update on the trail, we decided a return visit was long overdue, and knowing there were significantly more trails than before, I reached out to Kiwi Paul, AKA Paul Lissette at Dirt Mechanics, to get the 411 on the best way to maximize happy good fun times on the trails. 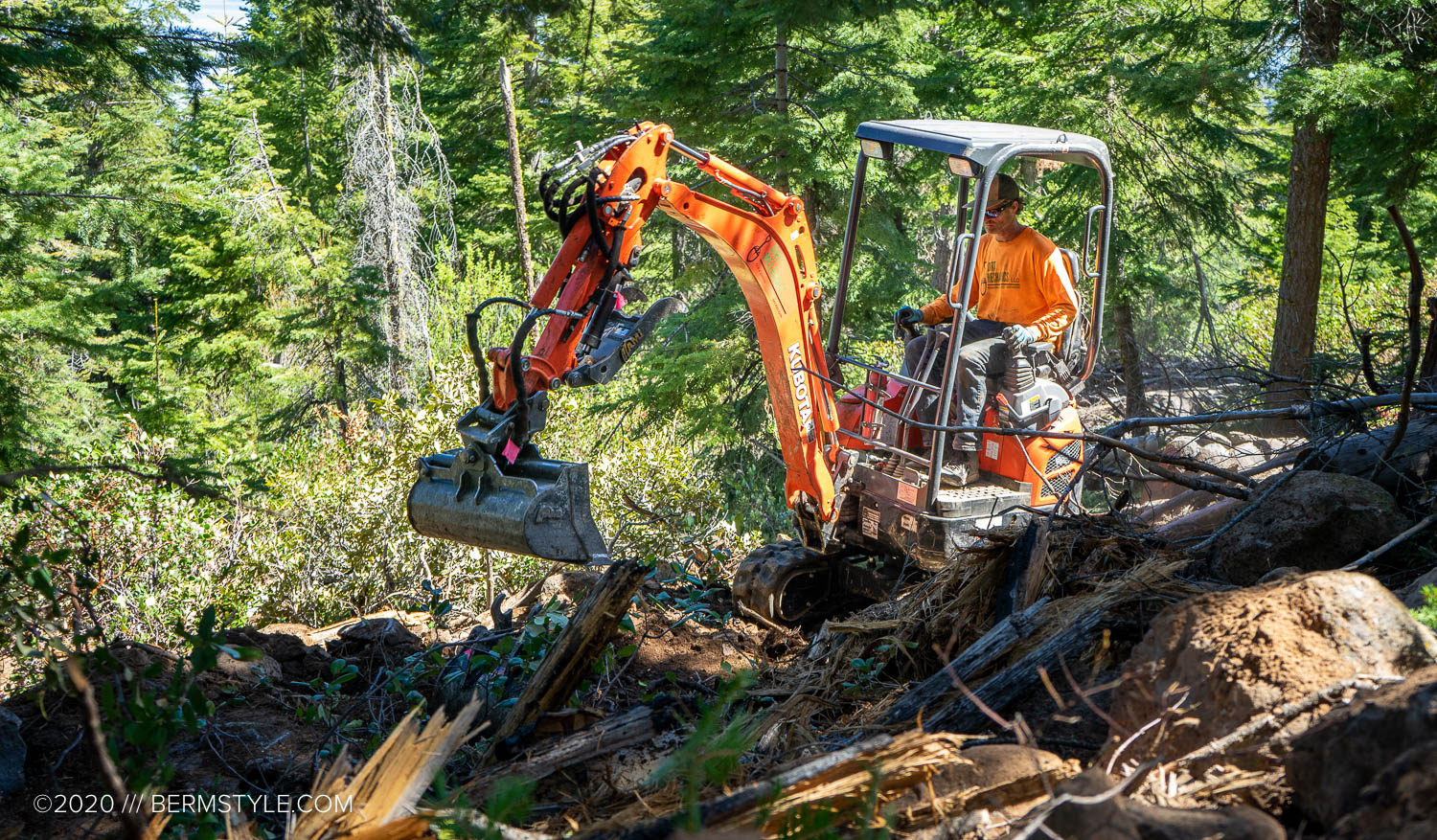 Paul was more than accommodating and furthermore was an amazing host. Not only did he give us a ride up to the worksite, (which saved us from having to kick off our ride with a five-mile climb at the start; we still had a big day of pedaling, completing almost 25 miles by the end of the day) but we received a look at some of the bits of trail in progress, and we got to hear more about the challenges involved in building trail in the dry rocky terrain.

The Master Plan for the project initially called for 53 miles of professionally constructed mountain bike trails; according to Paul, due to the success of the trail system it’s already been expanded. And they’re on the way, there are already more than 40 miles of trail to ride. The trail crew has simply have been crushing it – we received word that the projects in progress during our recent visit have been completed, bringing the total of the network to 42 miles. 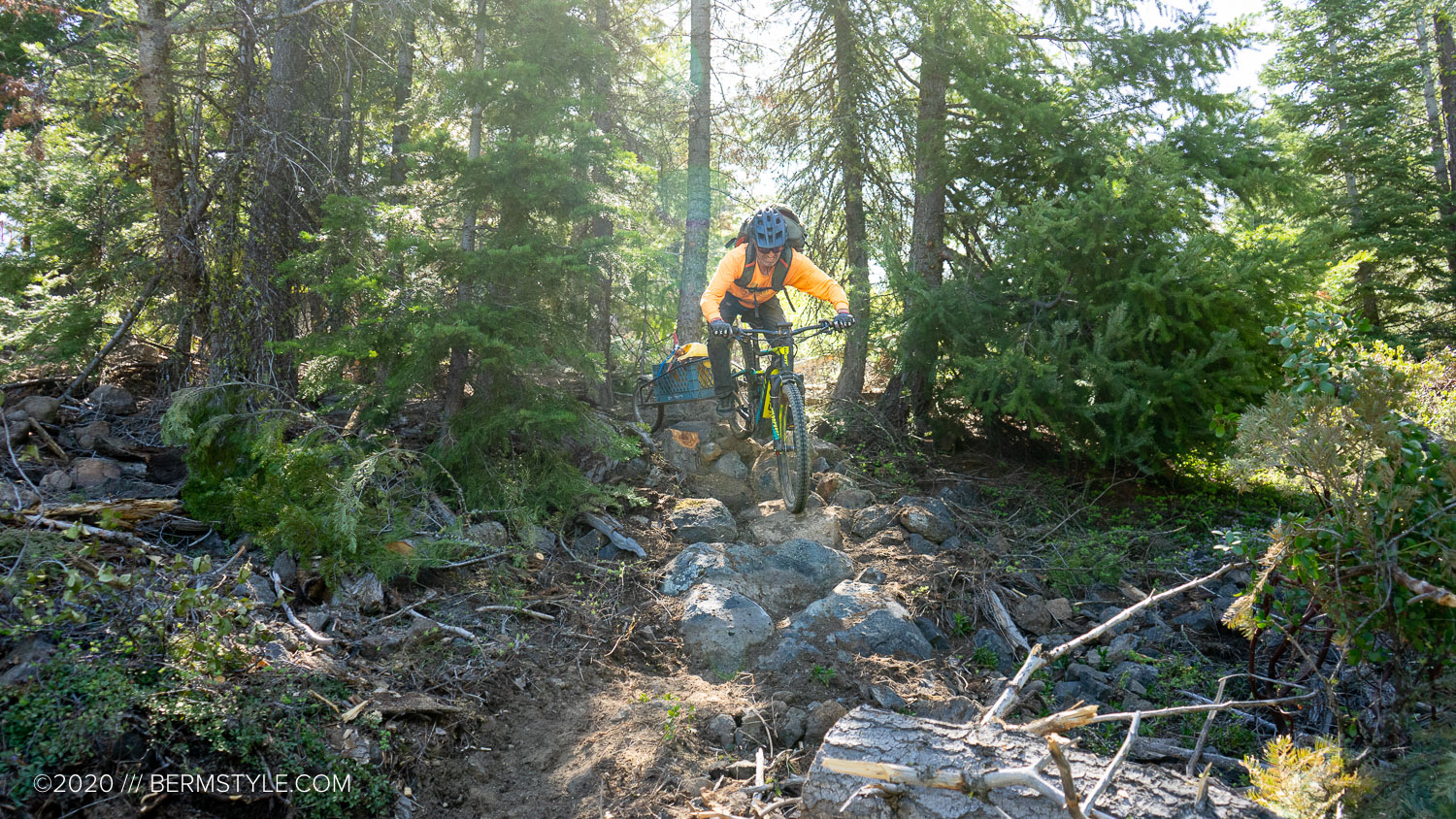 The best trail builders are usually skilled riders. Paul demonstrated this, riding his ebike through a rather nasty rock garden while towing a full trailer. <awesome>

On our first visit, we parked at the Spence Mountain Trail Head. This time around, we staged at the Shoalwater Bay Trail Head. As we had a camp spot on this side, it made the most sense. It’s now our preferred starting point for creating loops as it’s great to be able to end on the North Ridge Trail. We’ll likely start from our campsite on future visits. 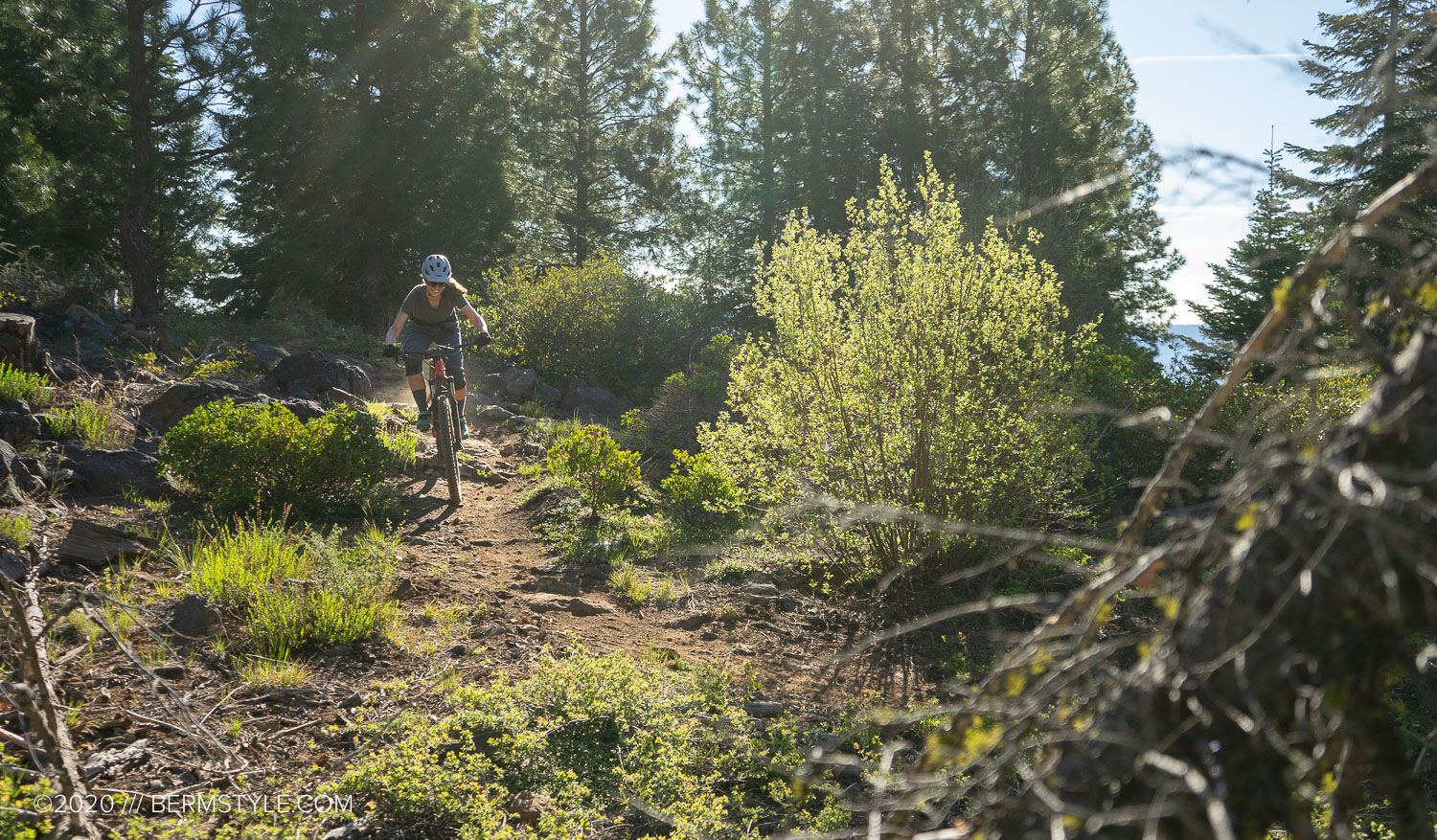 As Paul gave us a lift up to Spence Peak, (for those asking, shuttling doesn’t quite work here; not only are you in for a pedal no matter what, and the trails aren’t currently designed for shuttling as there’s no easy pick up) we got to skip the first bit of climbing and based on Paul’s recommendations began with a descent down the Hooligan Trail. 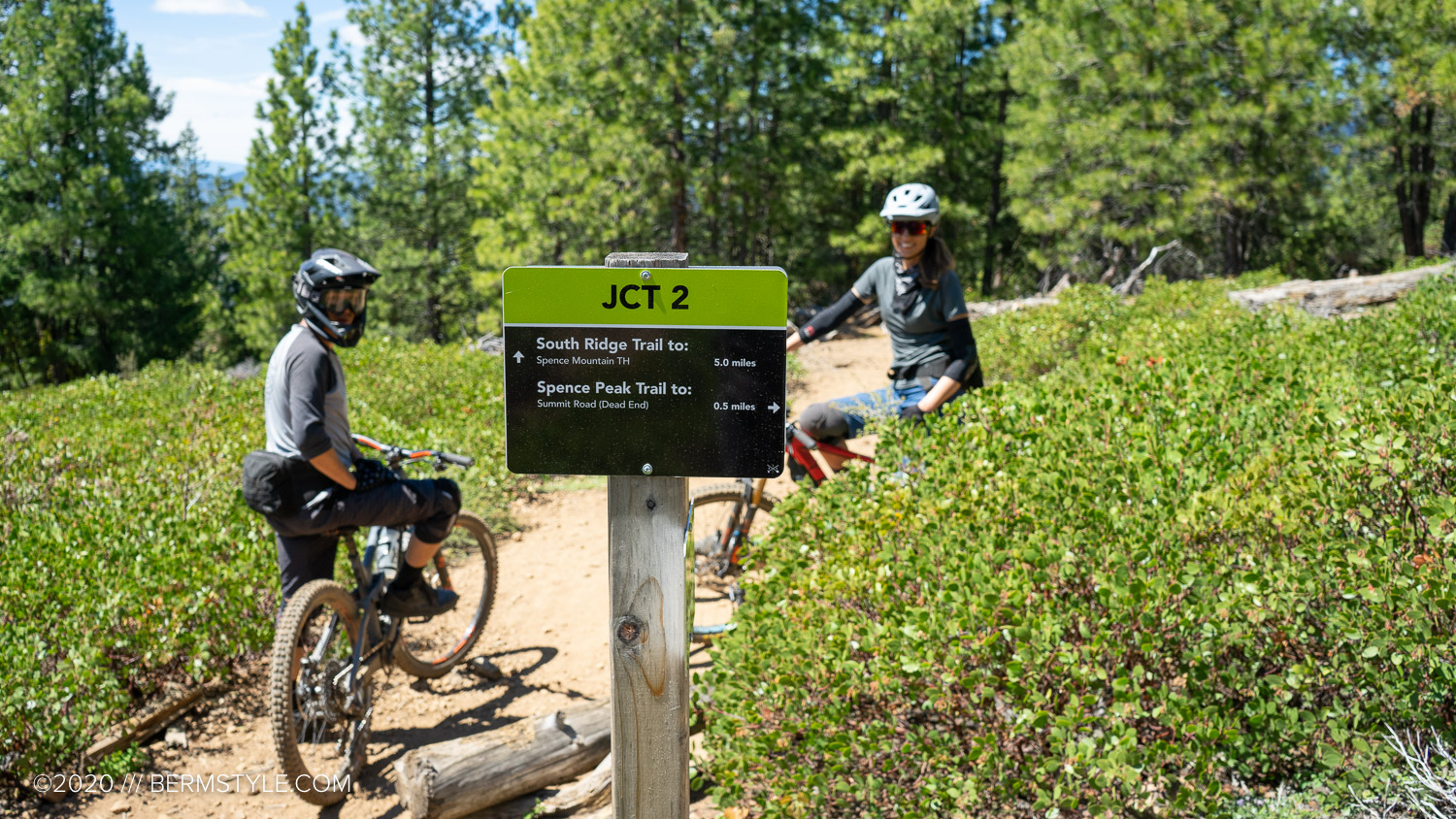 We had previously climbed up South Ridge; this time, we elected to cut over from Hooligan and pedaled back up a connecting road to Junction 3 so that we could experience the whole of South Ridge as a 5-mile descent. 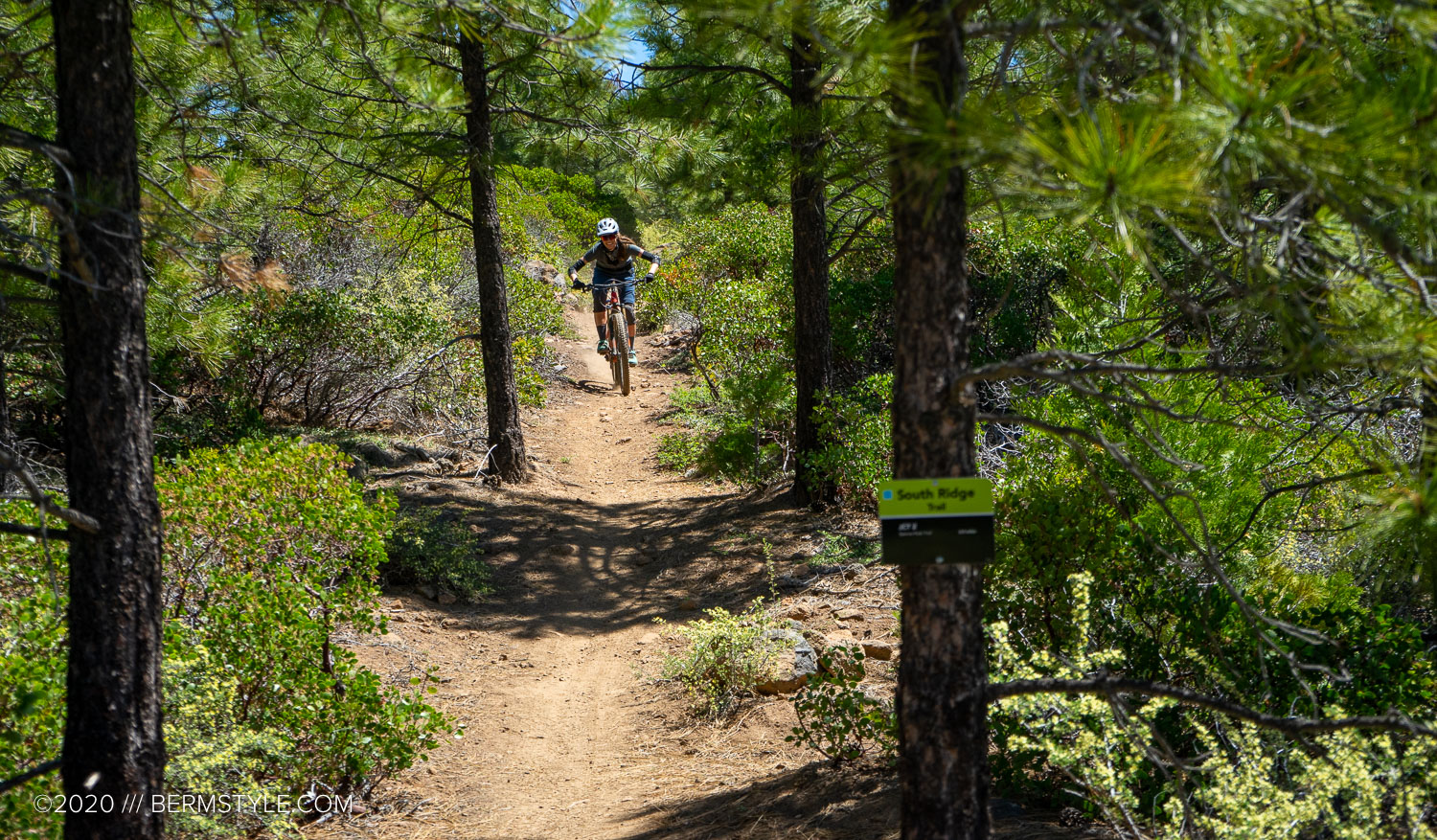 At Junction 1, AKA the Spence Mountain Trail Head, we headed over to ride the new black diamond trail that skirts the lake, the aptly named “Queen of the Lake”.

According to Paul, “Old school mountain bike legend Paul Thomasberg has been a major player in the Spence Project, trail layout and design, some trail building (majority by DM) and definitely the lead on Queen of the Lake trail and the culprit for a lot of the rad rock work on that trail working with the DM crew.” 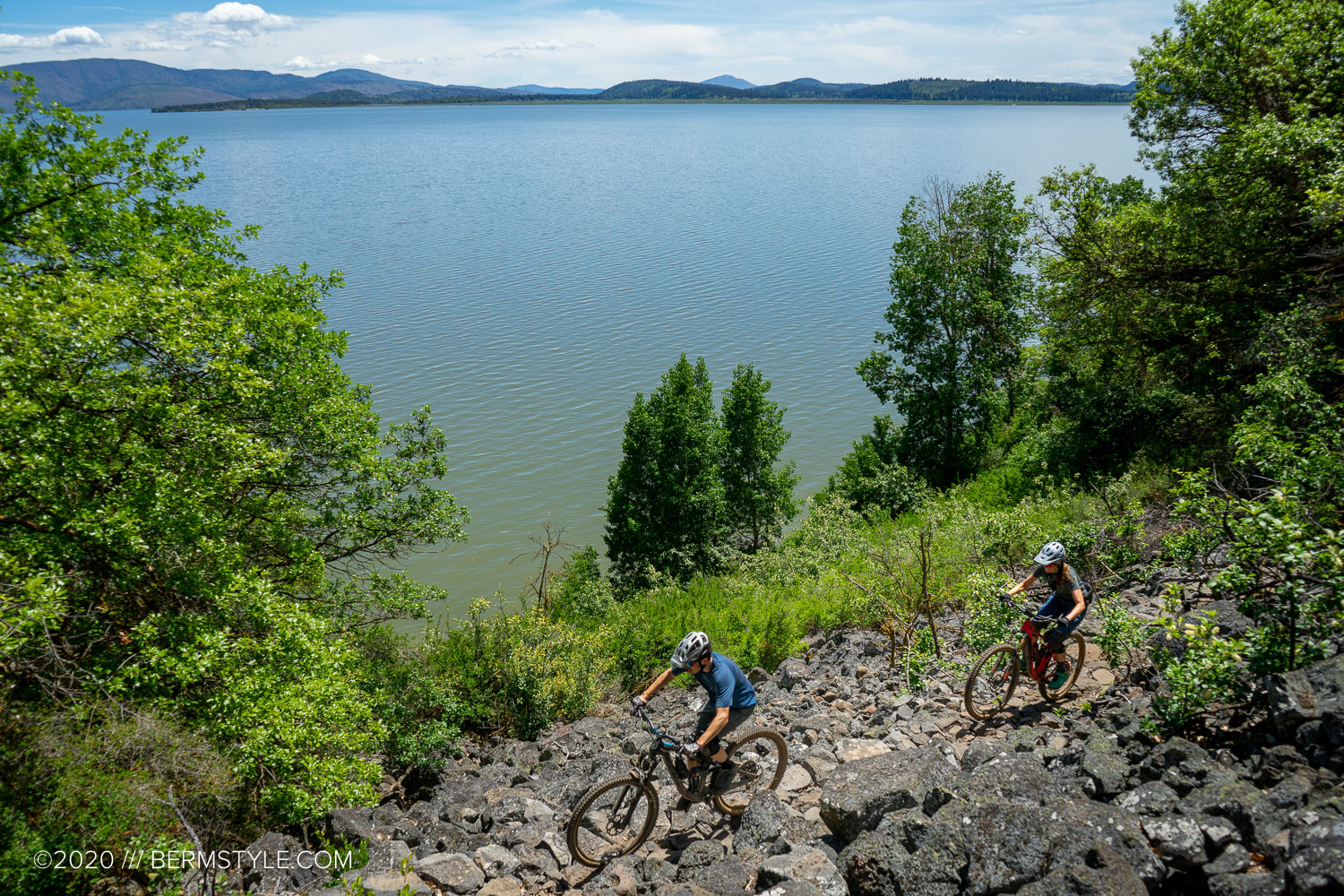 Queen of the Lake Trail

It’s obvious a huge amount of effort went into creating this trail — it was impressive to look at all the rock work here — not only was this trail hand-built, but each rock was placed manually. 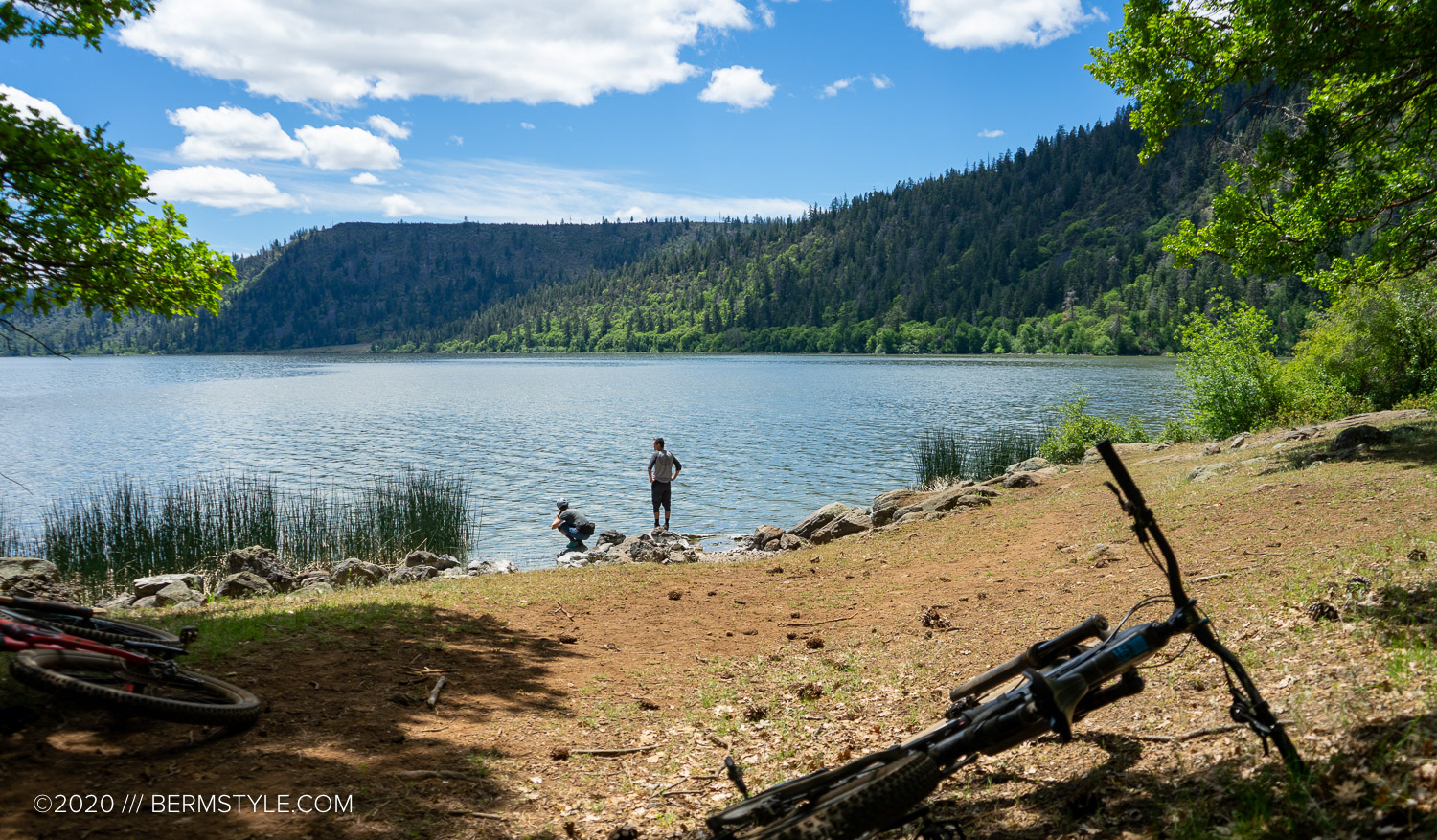 There’s a nice spot to hang out by the lake at Junction 10, so we did exactly that. At this point, we still needed to pedal back up the mountain in order to do the North Ridge descent, but as we were all low on water at this point, we elected to go around the mountain and take Modoc (a new green route) back to the vehicle for a rest break and to resupply. 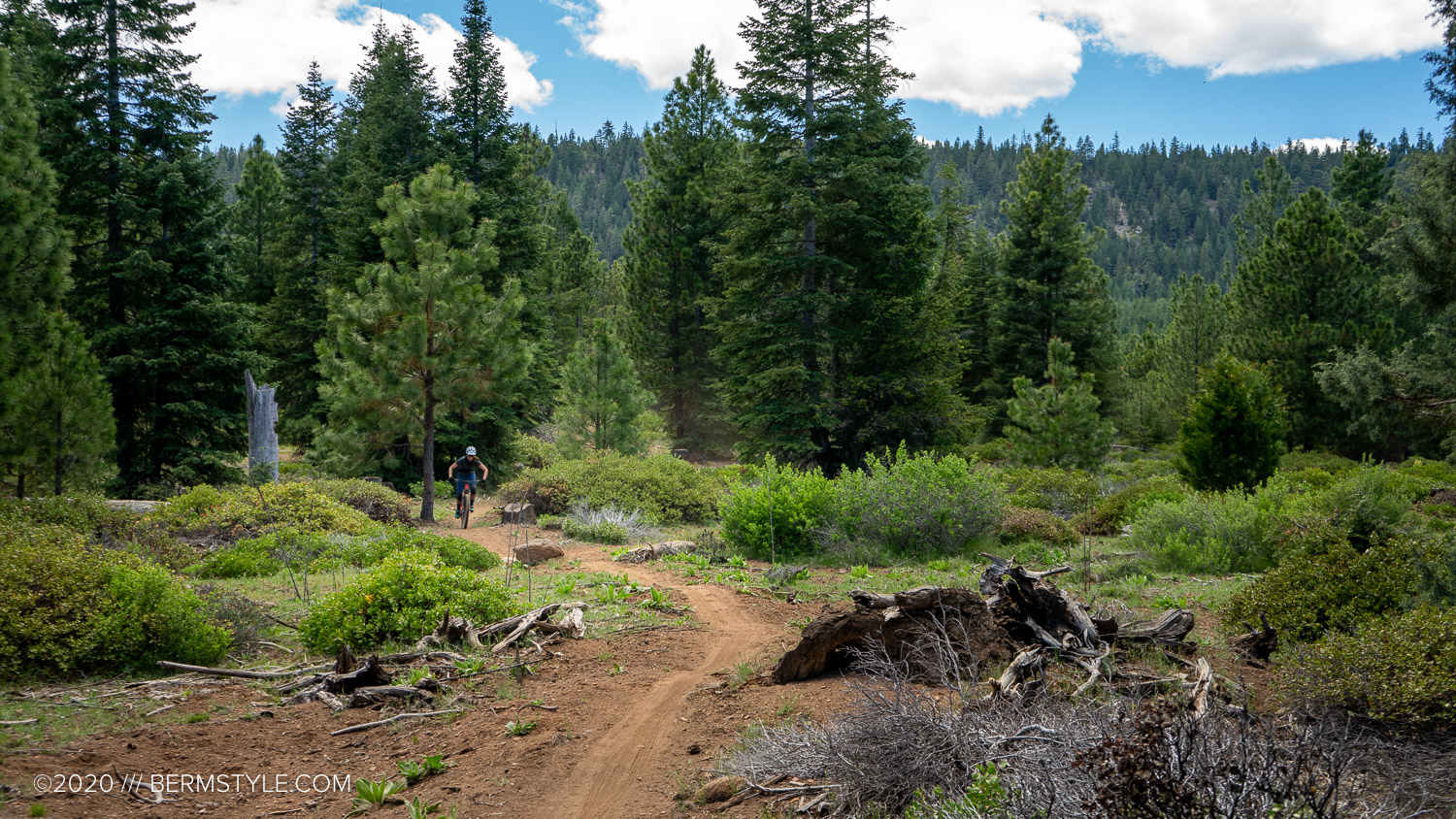 Returning on the Modoc Trail.

After a break, my brother Izaak and I did a lap on North Ridge. With big burly rock gardens, jump lines, rock-filled chutes, and drops, Northridge contains everything a technical trail rider could desire, packed into one heart-pounding thrill ride. 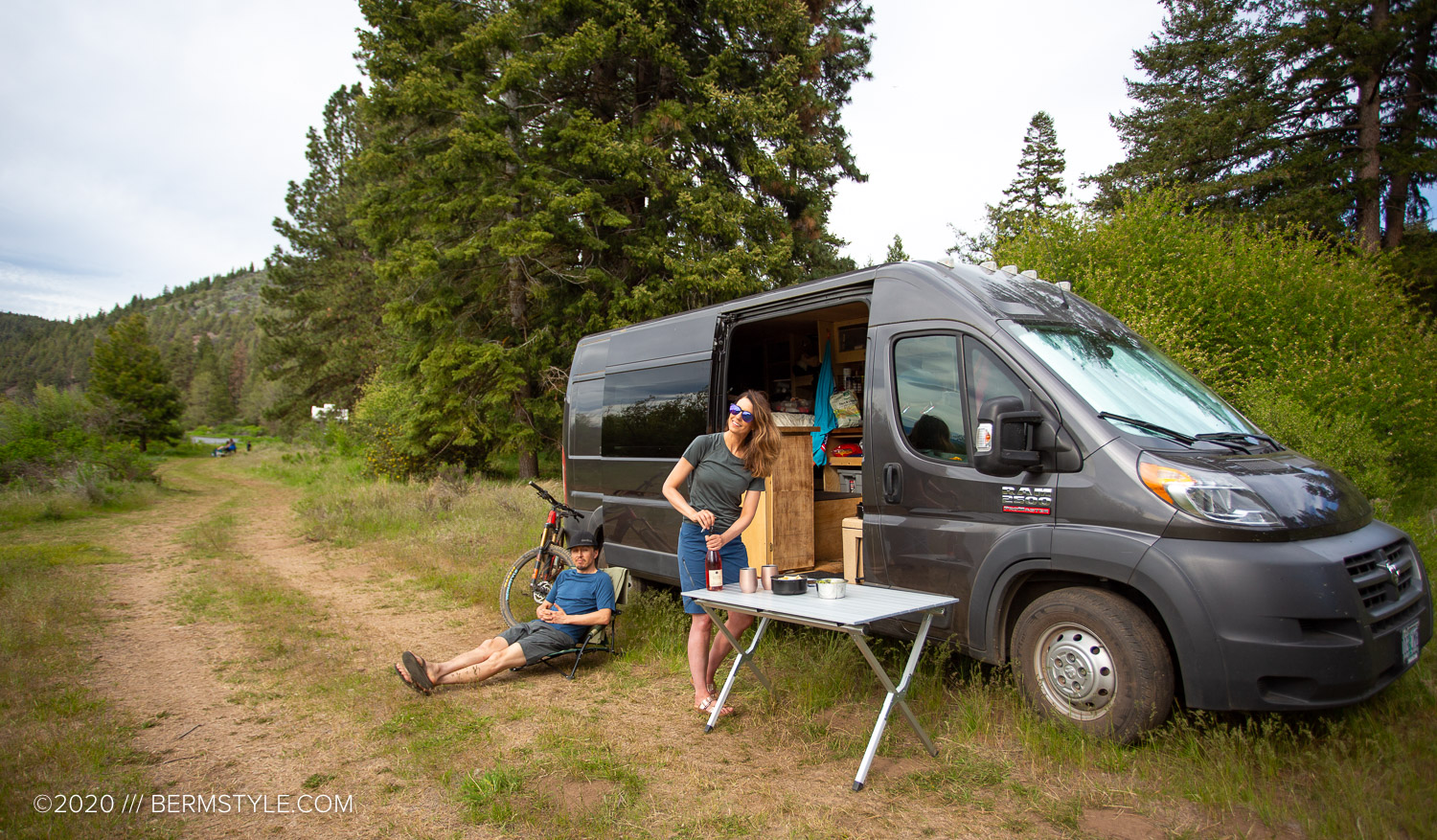 Post-ride, we headed back to camp to eat, drink, and relax for the rest of the afternoon.

After a pleasant evening of camping and hanging out, we woke up early as Paul offered another a lift up on his way to his work site again.

Waking up was totally worth it as we beat the heat this time around. Though we did a shorter ride with the intention of shooting photos, we ended up being out for a good chunk of the day, before wrapping up and heading home. 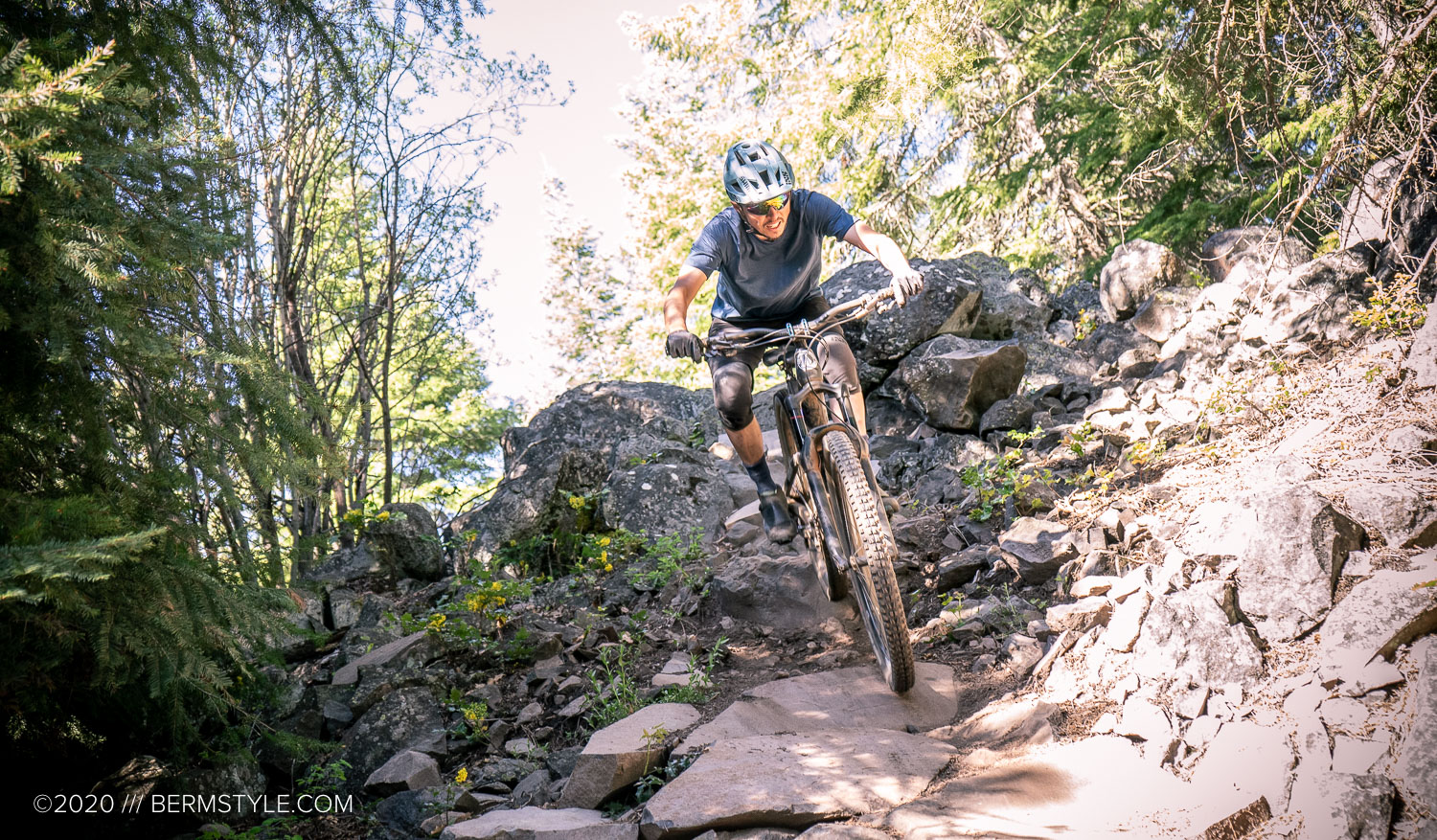 Dropping into the rocky chute line on Northridge

After riding the first half of Hooligan, we cut back over and climbed back up to ride North Ridge again.

We’ve said this before, but North Ridge is a really great trail. So often we feel we’re riding trails where we’re over biked. However, 5-6″ of suspension travel is just right for attacking the gnar and rock gardens here. I recently took off my heavier 2.5″ treads to return to lighter 2.35″ tires, and I was torn about this decision.

Of course, tires are always a compromise – light is great for 3 hours + of pedaling, but that additional volume sure is nice in the burly rock garden that North Ridge Trail ends on. 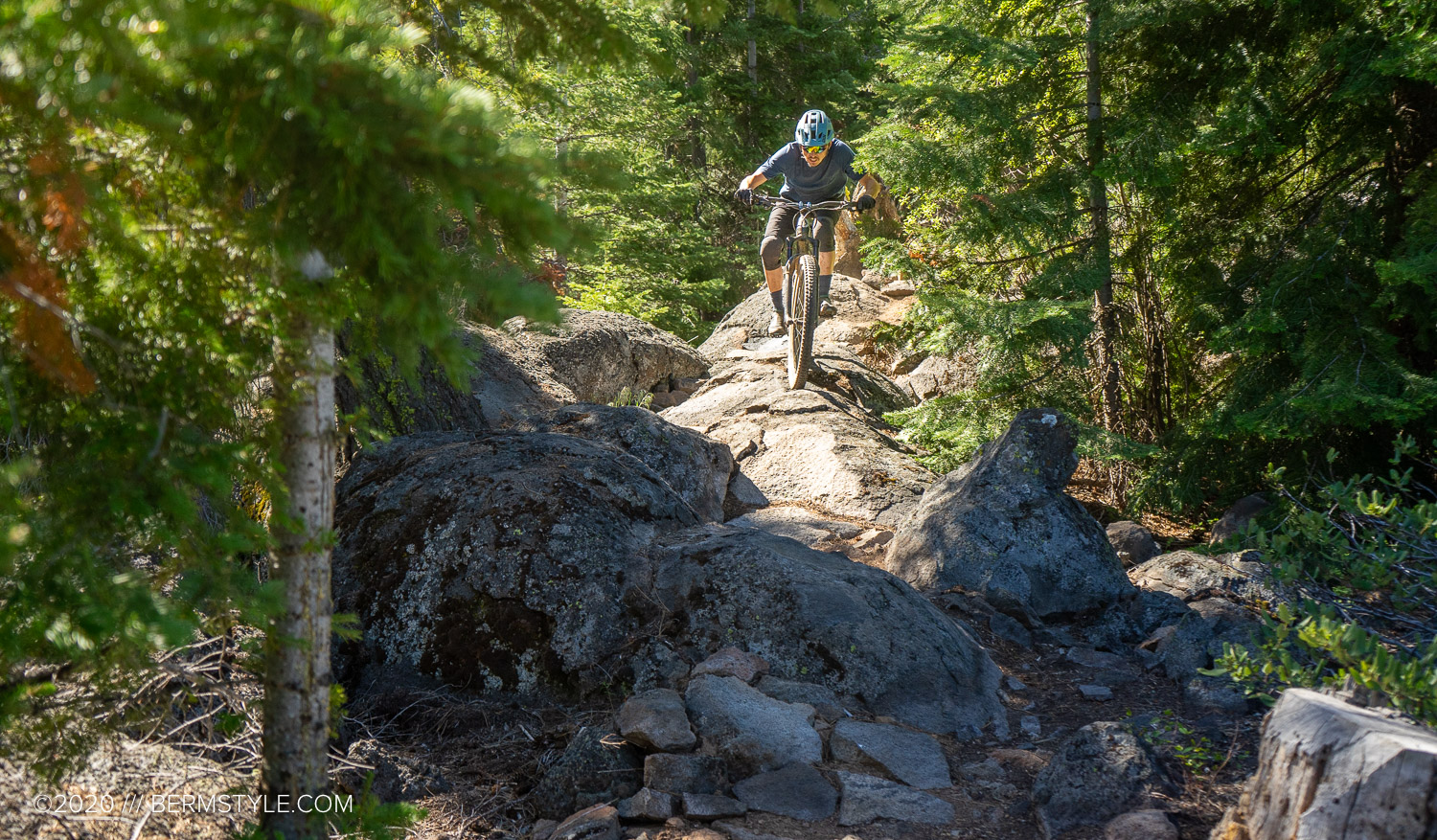 Overall, we continue to be impressed with the implementation of the stacked loop trail system found at Spence Mountain. There’s something for everyone here, and everything is well signed, making it easy to get around.

Next time, we’re bringing our stand up paddleboards and spending the afternoon floating.

Learn more about the Spence Mountain Project at www.klamathtrails.org

Love the trails here? Consider contributing to the trail system with an inexpensive membership ($20) to the Klamath Trails Alliance

We’re fans of the trail building and design work of Kiwi Paul and Dirt Mechanics.