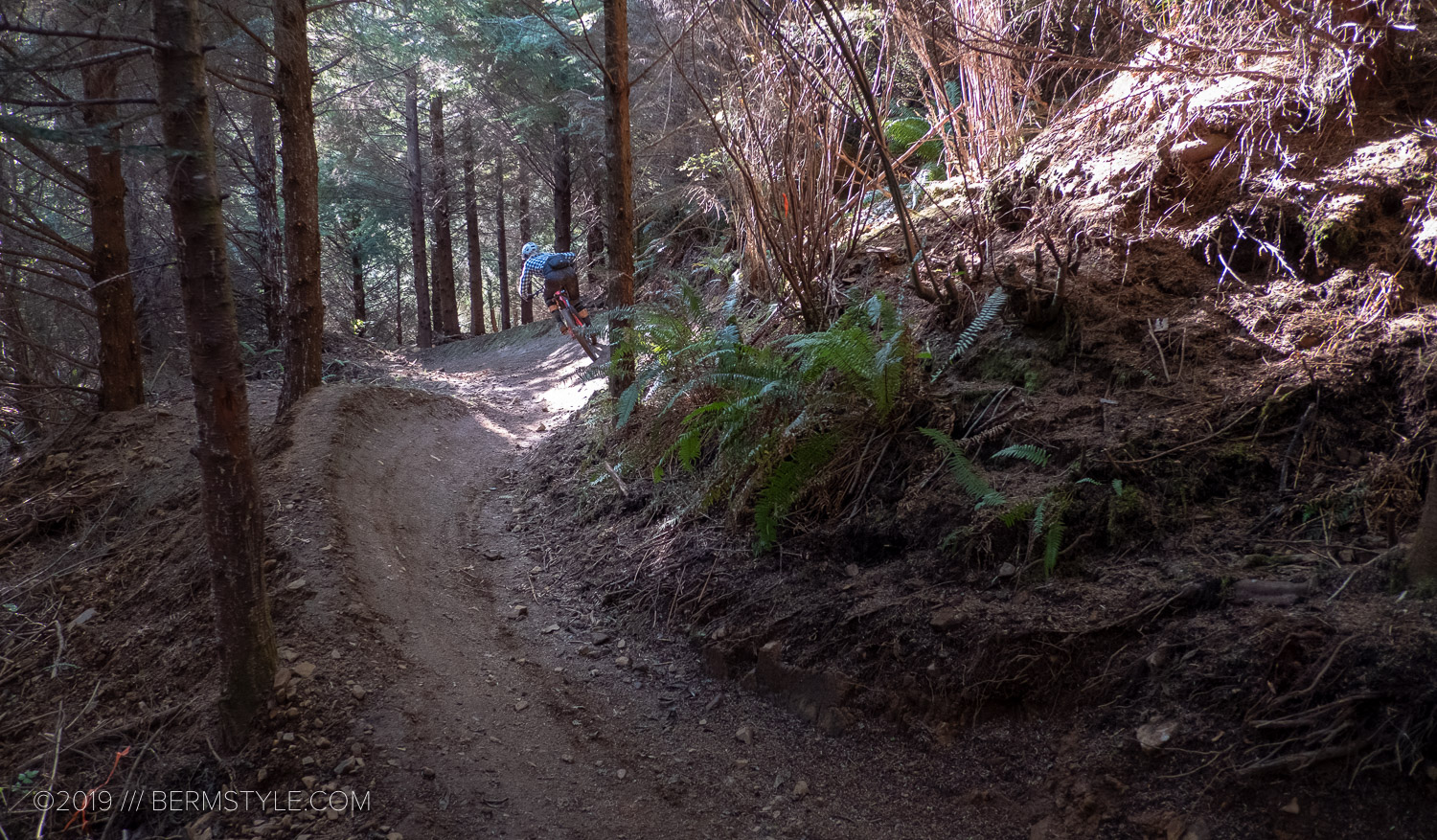 As a mountain biker that grew up on the Oregon coast, I’ve been watching the progression of the new trails near Seaside, Oregon closely. The last time we visited the Klootchy Creek Trails a trail work day was in process and we got an advance preview of their flow trail Mo’ Flow. Over the holiday weekend, we had an opportunity to revisit the berm-filled wonderland and finally got to session the new flow trail.

The first time riding the not quite opened trail we received first-class treatment, riding with local trail builders and architects of flow. Though I found myself nailing the lines the first time through, my main thought was how fun it would be if I was on a bike with 27.5″ wheels instead of 29″. 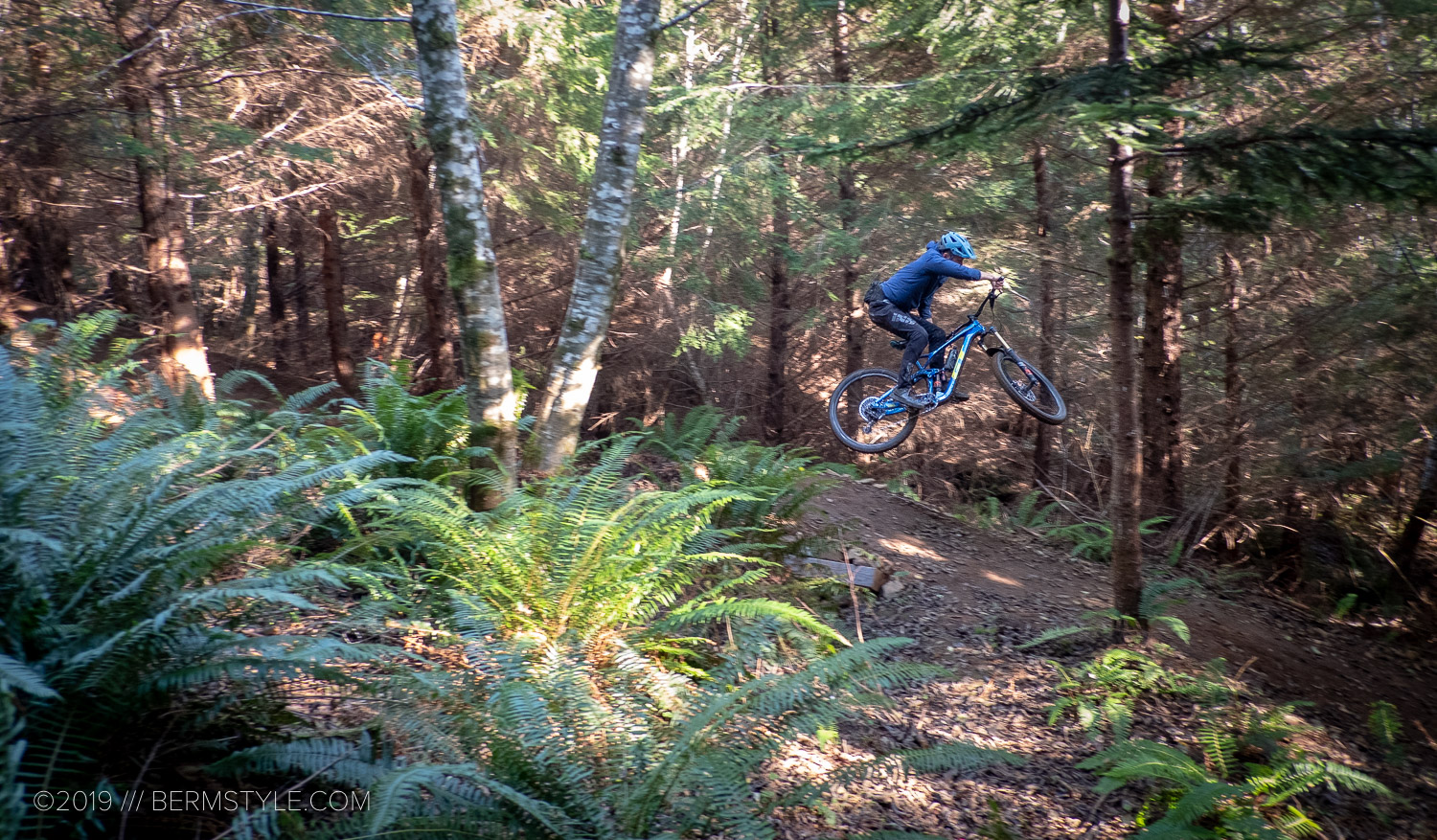 This time around I was aboard the GT Force carbon. 27.5″ wheels, 150mm of rear travel with a 160mm Fox 36 fork is a great equation for jibby fun times. On loan from GT bikes for a review, the Force was a great option for backwoods jump-filled fun.

A few wet spots on the climb through the clear cut where frost had melted.

After our go-to riding haunts are buried under a layer of snow, we occasionally turn our eyes to the coast, as the lower elevation and warmer sea air often mean better riding conditions. Since the Knappa DH Trails were closed, the coast has lacked mountain bike trails, so we were curious to see how the new ones handled the wet season. Initially we were a bit bummed to see some wet spots and were a bit worried about a freeze-thaw situation, but as our wheels didn’t create ruts during the climb through the clear cut, it doesn’t seem to be an issue. (it’s also possible to by-pass the clear cut and climb the logging road to access many of the trails) 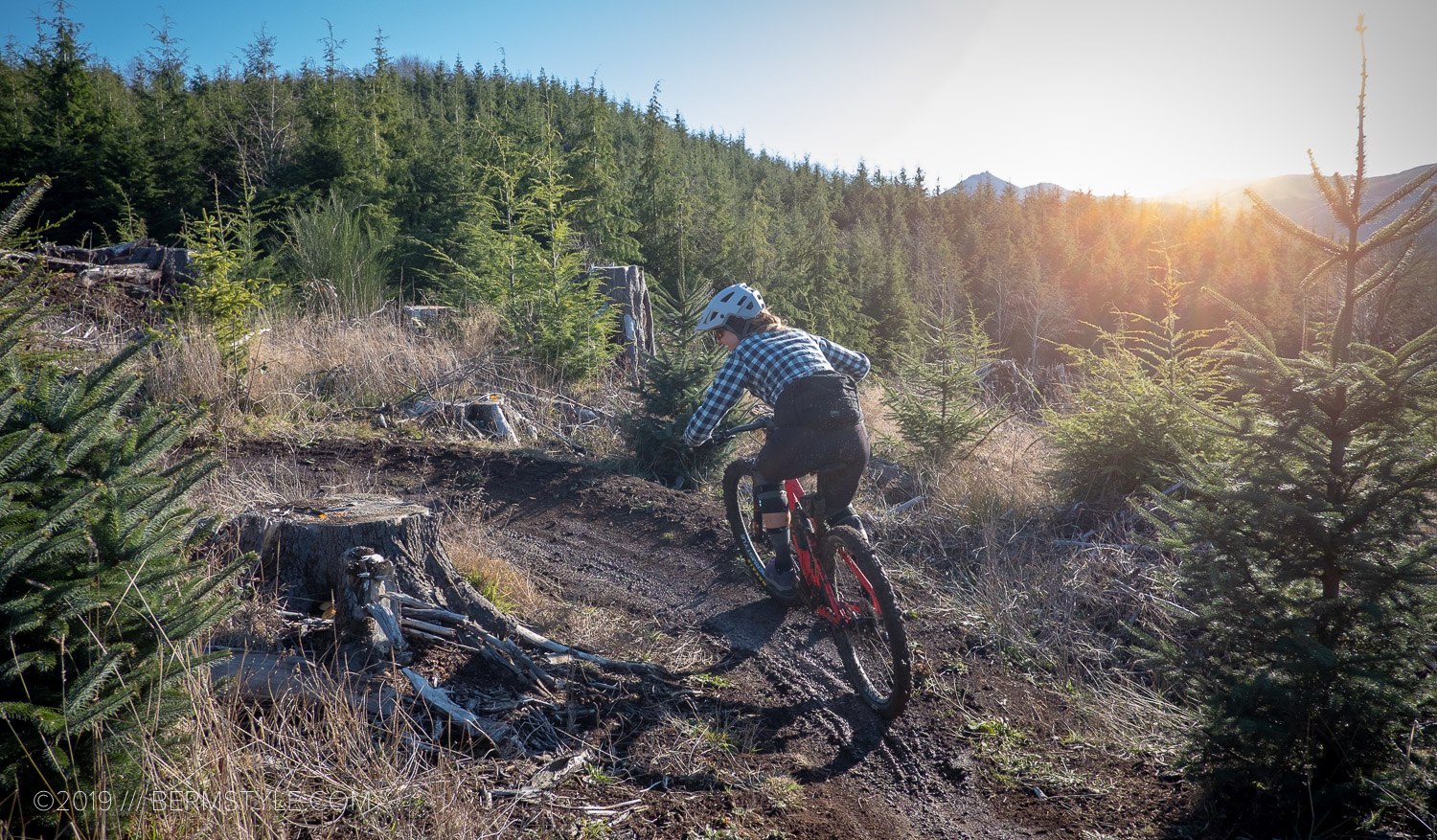 The berm is dry at least

Once we reached the section of trail in the trees, conditions improved, and we were back to traditional coastal loamy riding. Conditions in the woods were great, though it can be dark as the tree cover is quite dense. Some of the berms were a bit slick , though not bad at all. 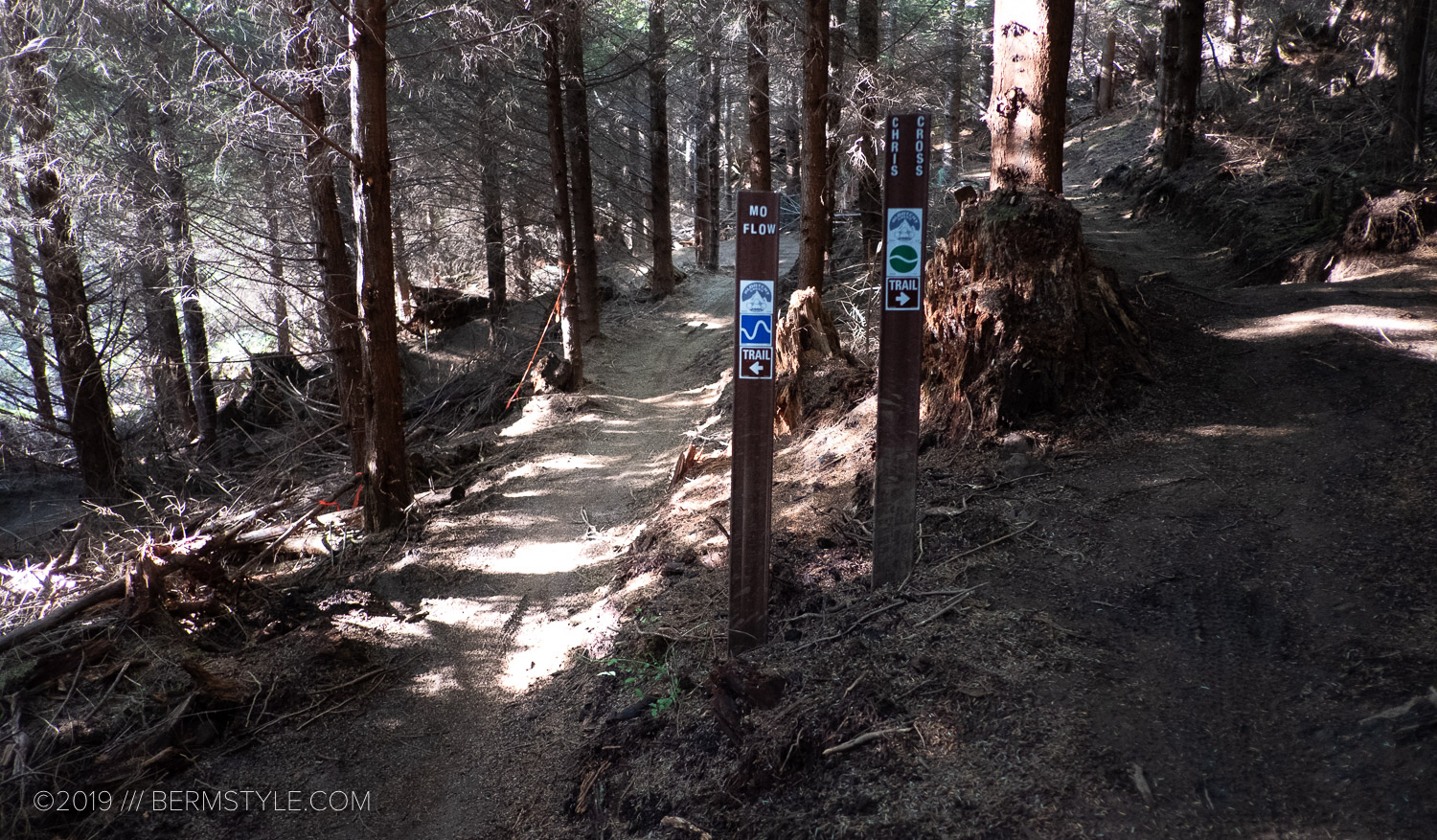 The start of Mo Flow.

Once I removed my sunglasses, visibility improved and it was all fun times from here as we sessioned a few sections of trail. 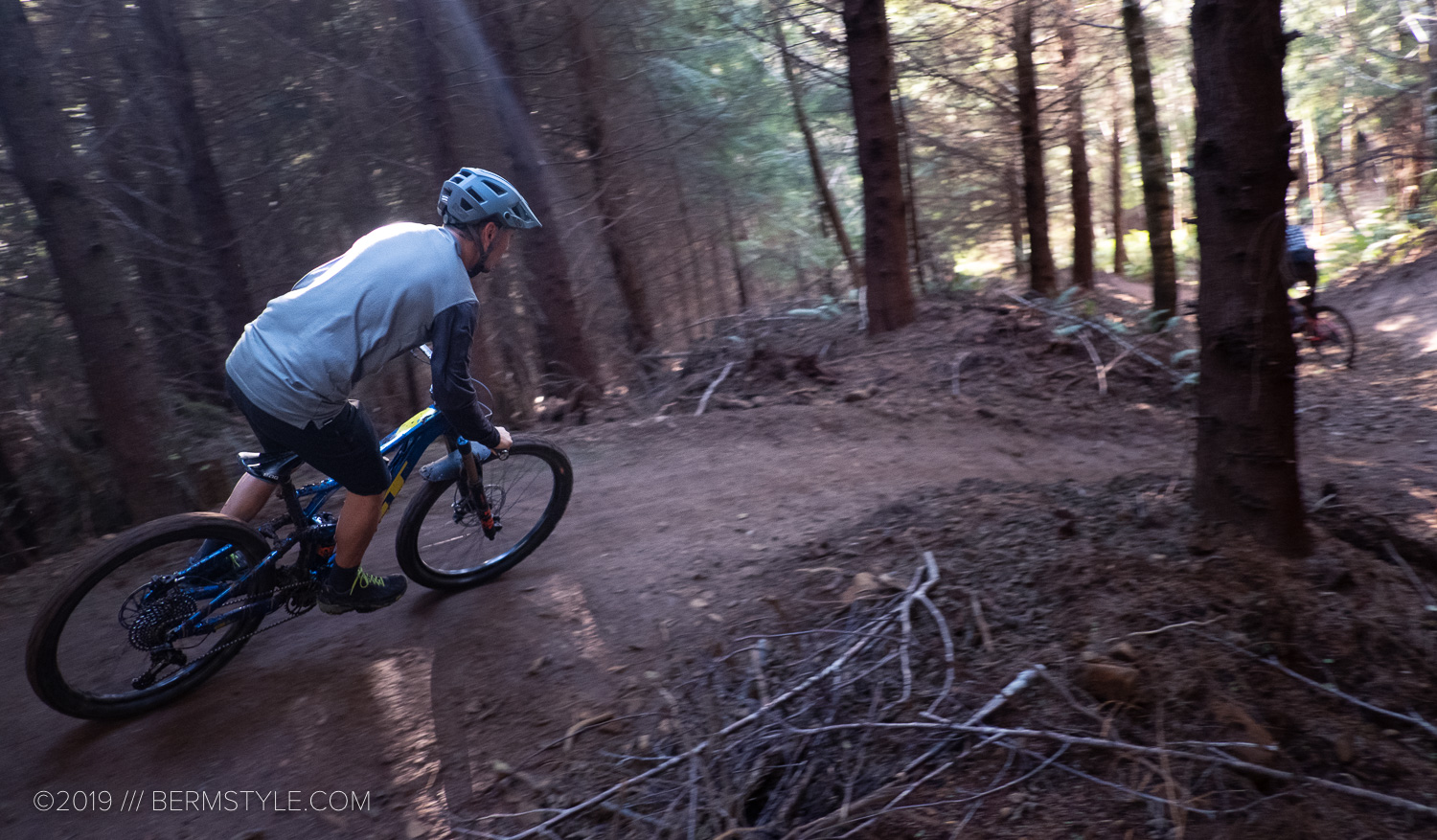 Mo Flow is a roller coaster of twisty turns punctuated with rollers and a few table top jumps that goes by far too quickly. The team did an amazing job and it is clear there is some trail building talent residing on the Oregon coast.

Though the mileage isn’t quite there yet, the North Coast Trail Alliance is well on their way to creating a coastal mountain bike trails destination.

About the Klootchy Creek Trails

The Astoria/Seaside area is surrounded by amazing terrain that holds the potential to be a mountain bike destination, but until recently, there has been a serious lack of mountain bike trails. Although much of the PNW economy is fueled by tourism, they have yet to see the value of mountain bike trails tourism. The mountain bikers of the North Coast Trail Alliance have been working to change that, but facing resistance on public lands, have partnered with Greenwood Resources, the company managing access for the Lewis & Clark Timberlands to create a bike-optimized singletrack and recreation.

The entire trail system is constructed by unpaid volunteers, making their accomplishments especially notable, and like the Black Rock Trails, word is starting to get out. If you’d like to assist on the volunteer trail build days, visit NCTrailAlliance.com for more info.

As the Klootchy Creek Trails are on private land, a no fee recreational access permits are required. You can get a permit here.