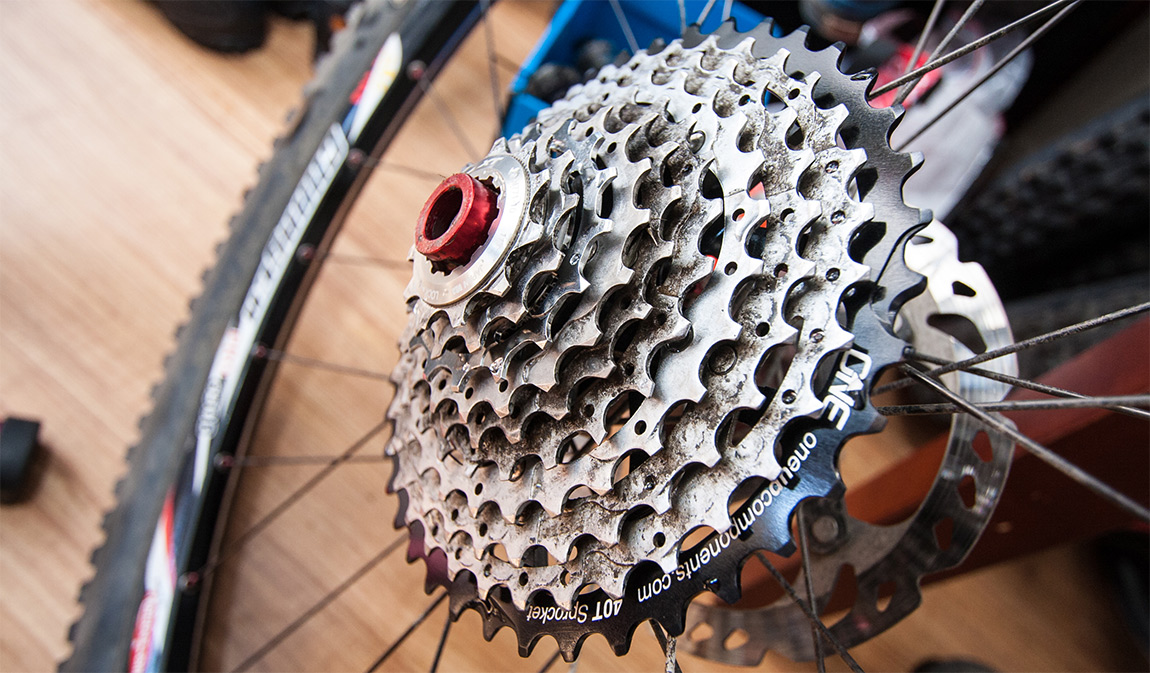 After 8 months with the OneUp Component 40 tooth sprocket, it’s still going strong. The rest of my drive train, not so much. Wear and tear has taken its toll and its time to replace worn out parts. On the bright side, it’s going to cost a lot less than it would if I was running 1×11. (insert hashtag here: #firstworldproblems)

Though one-by drive trains aren’t for every one, for those of us preferring less gears it’s an investment that is easy to justify. Dropping the front derailleur and running a one-by drive train results in a lighter overall weight for your bike with less to maintain. Not only does it free up handlebar space, (one less cable!) your left hand is freed up to focus on operating the lever of a dropper post. There’s also that small bit about not losing your chain — the reason most of us did it to begin with.

Before SRAM’s wide range 1×11 drive train came along, you had to chose: spin out quickly on descents, or struggle on climbs. The new wide range option changed the equation with an expanded range of gearing that was enough for most. It came with a heavy financial penalty though. A tax that needs to be paid regularly, especially for those riding hard and frequently. Replacement rear cassettes for the system alone run in the range of $400.

Fortunately for those of us that aren’t interested in 11 speed or emptying out our wallets, OneUp Components developed a solution for those of us running 10 speed. As a fan of Shimano components, it was just what I was looking for. Dropping a front chainring for one does accelerate wear and tear on the rest of the system, but no more than running the 1×11 alternative.

The installation was easy enough, though setup and dialing the shifting can be a bit tricky. We covered the conversion as well as a run down of the comparative costs of the OneUp option in a post about 8 months ago. I initially began with the massive 42 tooth sprocket in ano green. 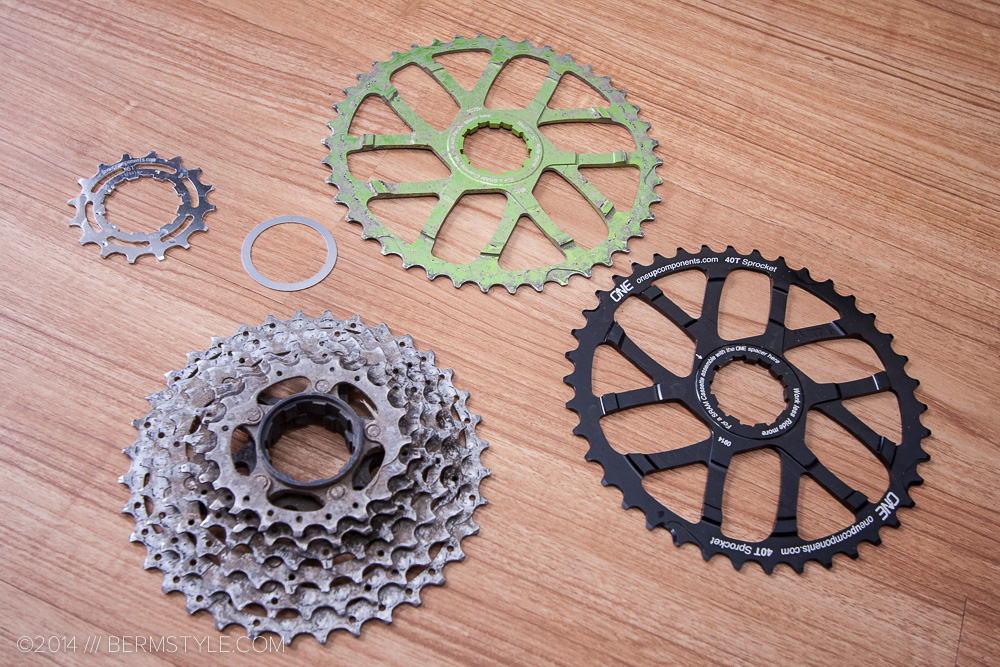 Swapping out the OneUp 42t for their 40t resulted in an improvement in shifting performance. Also pictured: the 16t cog.

On the trail the huge bump to a 42t in the rear was amazing. Especially for rides that involved big, long climbs. The downside was a significant drop in shifting performance.

Shifting in and out of the 42tooth cog was smooth, provided you keep your drivetrain maintained. Shifting to a lower gear is quick and after acclimating to the gearing, (and hardening the f-up a bit) I’ve cranked through a few days of elevation gain with no issues. For general trail riding it’s been awesome.

The downshifting wasn’t so great. While many general trail riders might not have minded the decrease in shifting performance, on flow trails or sections where I was quickly shifting and pedaling to pick up speed for dirt jumps or technical sections, the delay in shifts was less than ideal.

There was also the jump. To make room for the large sprocket you have to remove the 17tooth cog. It wasn’t a big deal initially, but I did find that jump between the 15 tooth and the 19 tooth was substantial. It’s most notable when you’re hammering the pedals aggressively. The answer: a 16t cog that splits the difference between the lost 15 and 17t cog, which OneUp began bundling with the 40 and 42T sprockets. 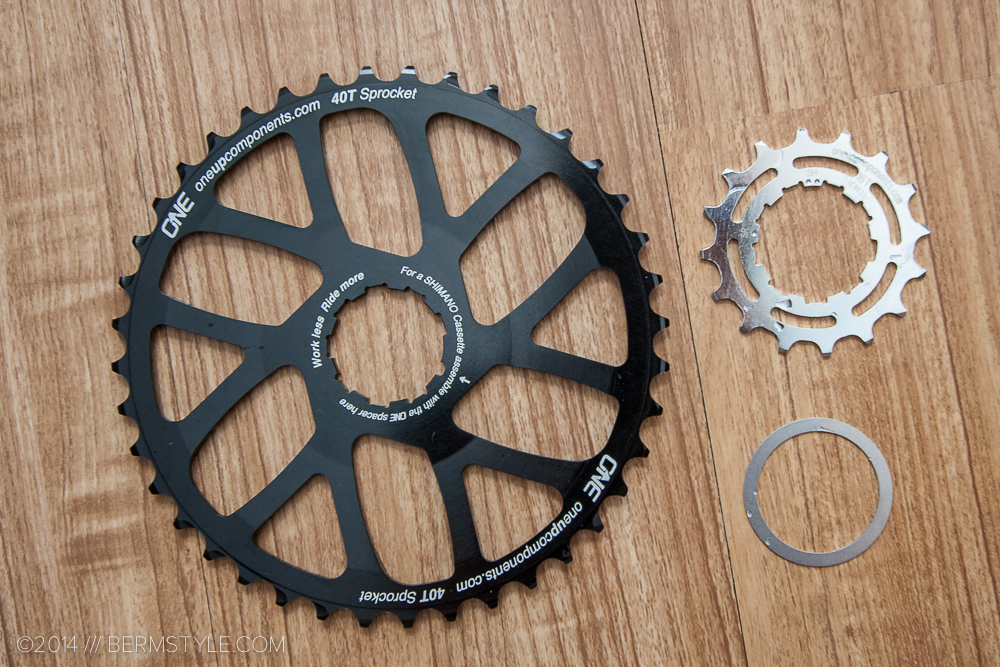 My upgrade gets upgraded: OneUp 40t and 16t cog prior to installation.

That helped with the downshifts a bit. Aggressive riding is when the downshifting performance is most notable.  To make the derailleur function with the huge cog, the set up requires moving the B-tension screw all the way in. It’s not an big deal on slower paced climbs or general trail riding, but when you’re hammering and pretending to be Enduro™, these small changes of performance are noticeable.

Your derailleur basically downshifts like the b-tension screw is completely out of wack. Unfortunately, in order to make the XT derailleur play along with the oversize sprocket, the screw needs to go completely in.

Eventually the slow shifting bothered me so much I ordered a 40t replacement, as well as OneUp’s after market 16t cog. 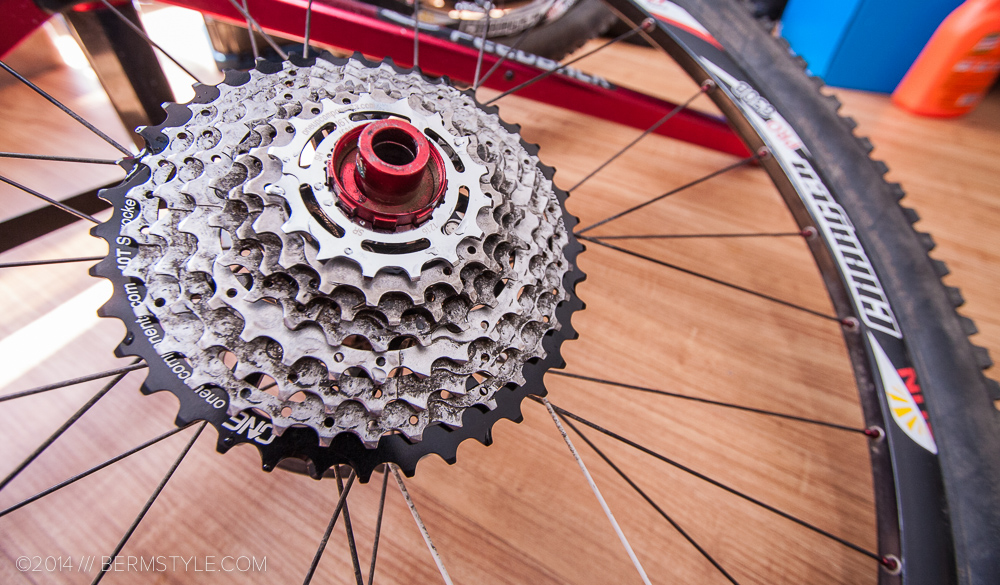 The 16t cog addressed the jump when shifting— something that didn’t bother me initially, but eventually started to wear on me. With the new cog the jump felt less noticeable, and I eventually stopped noticing it was an aftermarket cog at all; which means it works perfectly. OneUp includes the 16t sprocket with the big gear now, adding even more value to the cost equation.

I was happy with improved and faster downshifts I was able to achieve with the 40t. The loss the two teeth from the 42t wasn’t that bad either. It was still a welcome change from the previous high of the 36t. When I swapped from a Santa Cruz Bronson to a Nomad, the wide range drive train came with me. Although downshifts aren’t as quick or responsive as the stock setup, it’s a price I’m mostly willing to pay for being having the climbing gear, and overall, I’ve been pretty happy with the improved setup.

All was great until I had about 1000 miles on the system. Unfortunately stuff wears out and stops working like it used to. In my case, I got less life out of my cassette than I’d hoped to due to my stop and go riding style. The OneUp 40t sprocket still works great and has plenty of life in it. My XT cassette, not so much; it’s time for a replacement. 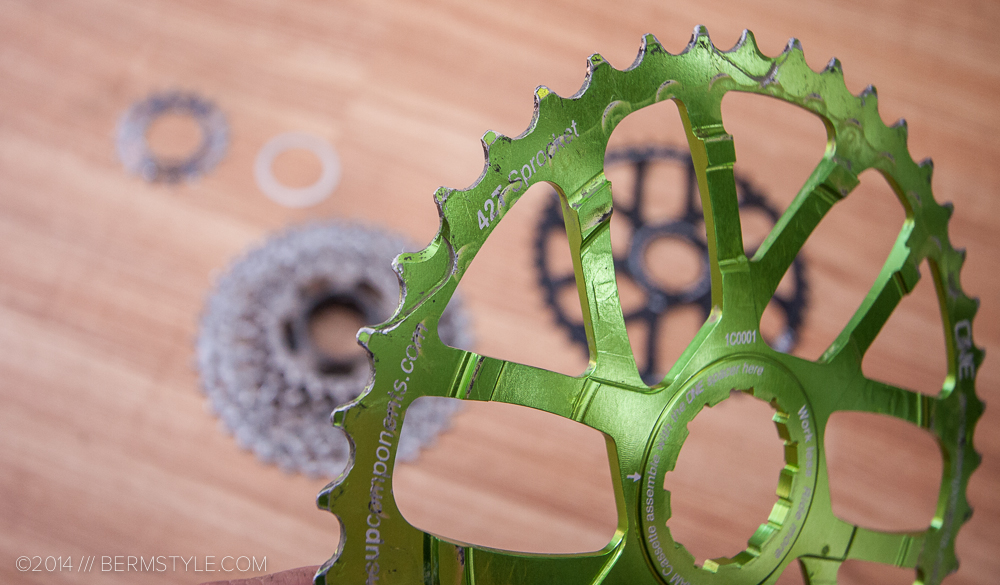 Not related to the OneUp parts but drivetrain related: I also had a few issues with my derailleur during this time; I experienced a few broken derailleur cables, which was a little frustrating. I eventually modified the clamp plate by filing it to reduce cable failures. (Peter Verdone documented this fix which you can view here) 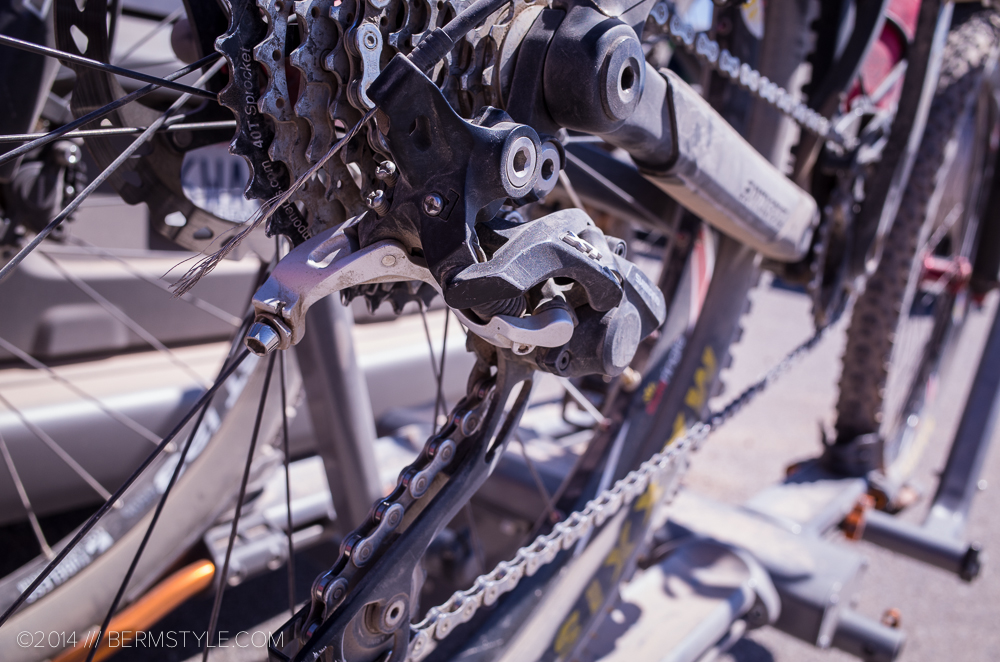 The modification to the clamping plate has so far been successful. I haven’t broken a cable since the modification was performed. Hopefully this is something Shimano adds as a running change to the product. Fortunately it is an easy and simple fix with a file; one we recommend performing. 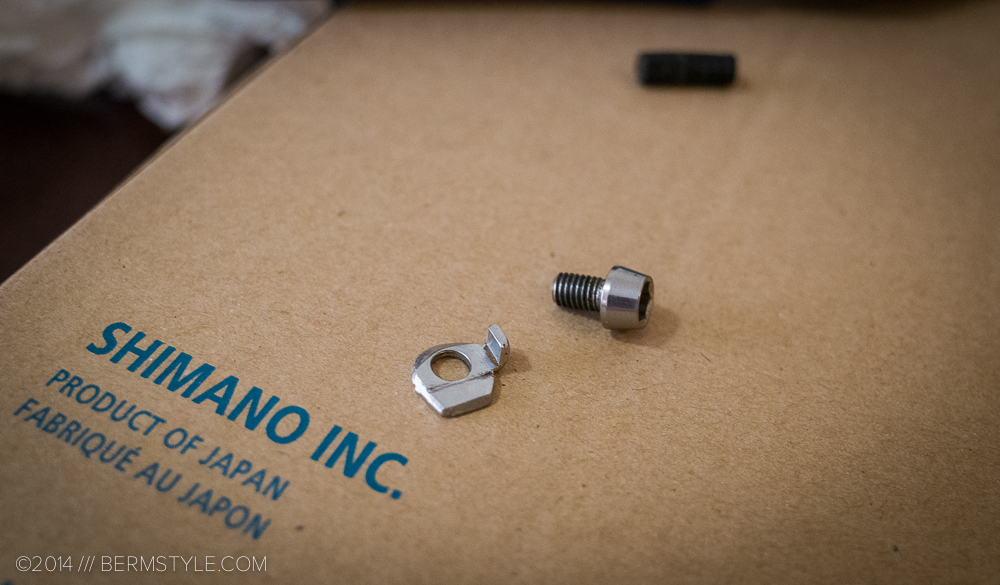 Clamping plate from a Shimano XT rear derailleur after the modification with a file.

The system works best when combined with a narrow wide chain ring up front. I’ve been running a model from E.thirteen.

The narrow wide chainring I sourced from E.13 has worked flawlessly. It’s a great product and while it makes for a boring review on a product, and that is all I can ask. I’ve paired it with their chain guide as well and it deserves a post of its own. 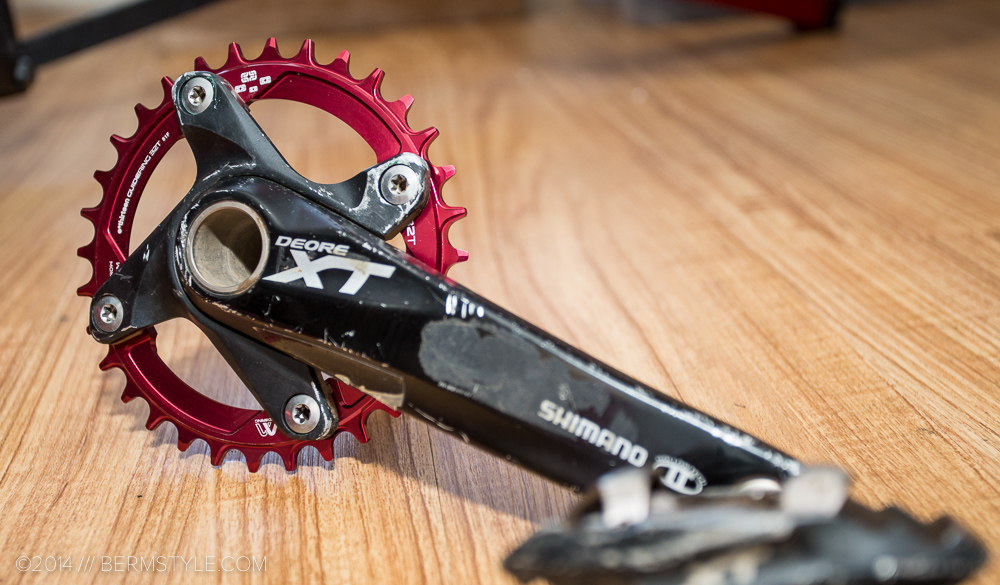 Since migrating to the Nomad, I’ve been doing a black with red accents color motif. The red E.13 ring looks totally sweet. Unfortunately, my preference for wide DH style shoes tends to scuff up the black XT cranks. I wish they had the polished surface found on SLX and XTR.

But I digress; back to the wear and tear issue. Normally I can get more than 1,000 miles on a cassette before needing to replace it, but it appears stomping up and down mountains and my habit of sprinting from a stop accelerated chain wear, stretching it out. Which in turn, caused additional wear and tear on the cassette. Next time I’ll plan to swap it out at about 500 miles or so to see if I can’t make the cassette last longer. The large diameter of the OneUp sprocket offers more tooth engagement, so although the rest of the cassette resembles the fin of a shark, the wear and tear is much less pronounced. I may order a spare to have on hand at some point, but it’s still going strong.

I’m also planning to order up OneUp’s new and just released RADr cage, which looks to be the solution to all the issues I’ve had with the B-screw adjustment. If it performs as expected, I might even put the 42 tooth back on. I just wish it came in red.

OneUp mades a great line of products that improves the riding experience of the stock Shimano drivetrain. If you elect to change your 2x Shimano drive train into a 1x, buying into the complete system is recommended. And it still costs way less than the alternative.

Since Shimano appears to be focusing product development on marketing on electronic shifting, it looks like I’ll be sticking with OneUp for a while.