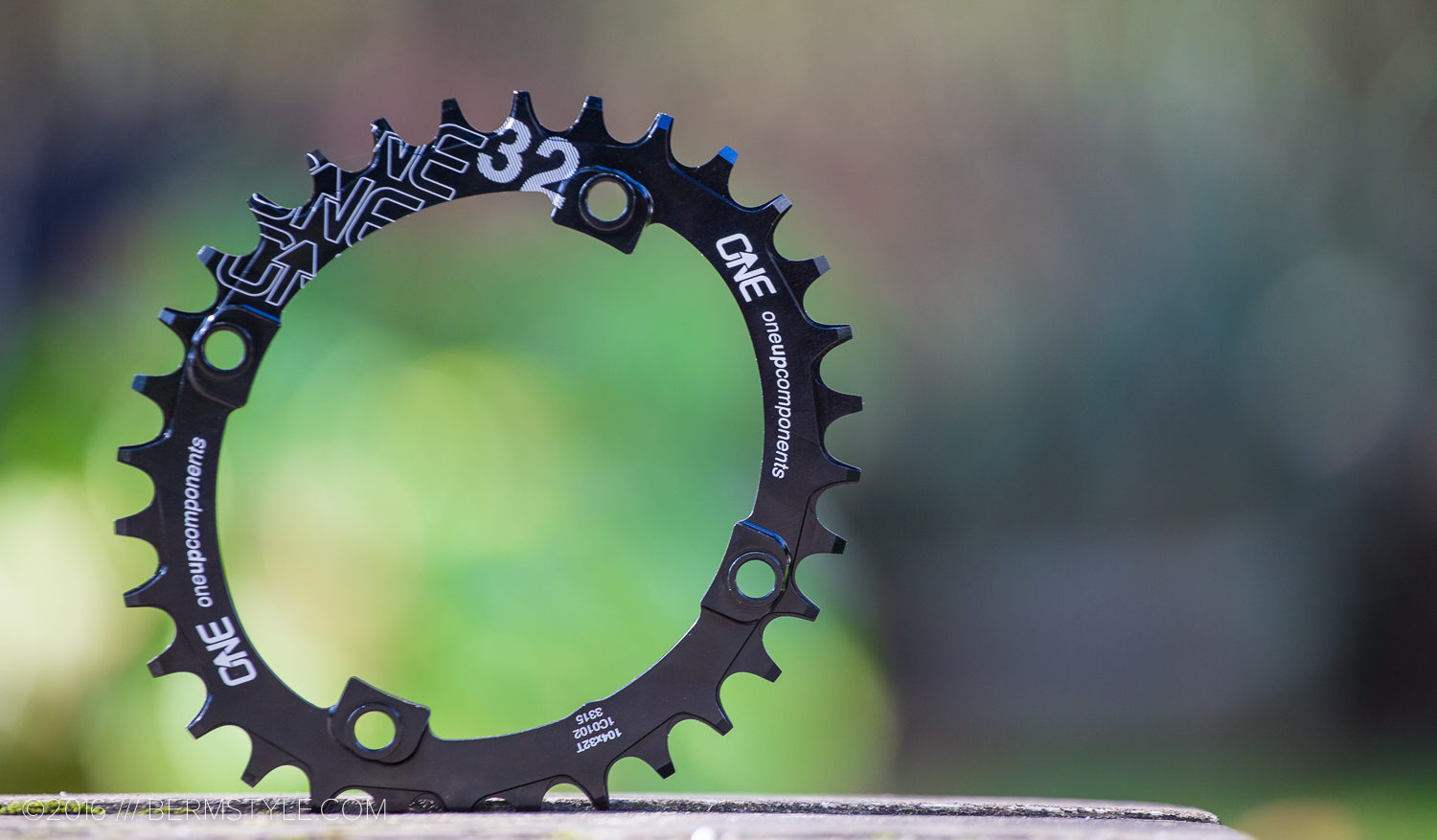 A close look at the 104 BCD Traction Chainring from OneUp Components.

The concept of the non-round chainring and promises of increased power and efficiency has surfaced repeatedly over the years only to disappear — this time they may be here to stay. Though initially perceiving them as a gimmick, since bolting one on, my tune has changed. I’ve been riding with the Oval Traction Chainring from OneUp Components for months now, and it has proved to be a solid performer.

Over the last year we’ve become fans of the products from OneUp Components, and that extends to how they’ve marketed their oval chainrings. They don’t make outstanding claims about performance, tout how it’s better than everything else or attempt to persuade us to throw away our old round rings. In fact, their primary selling point is that the product provides an increase in climbing performance because you get better traction – hence the name. 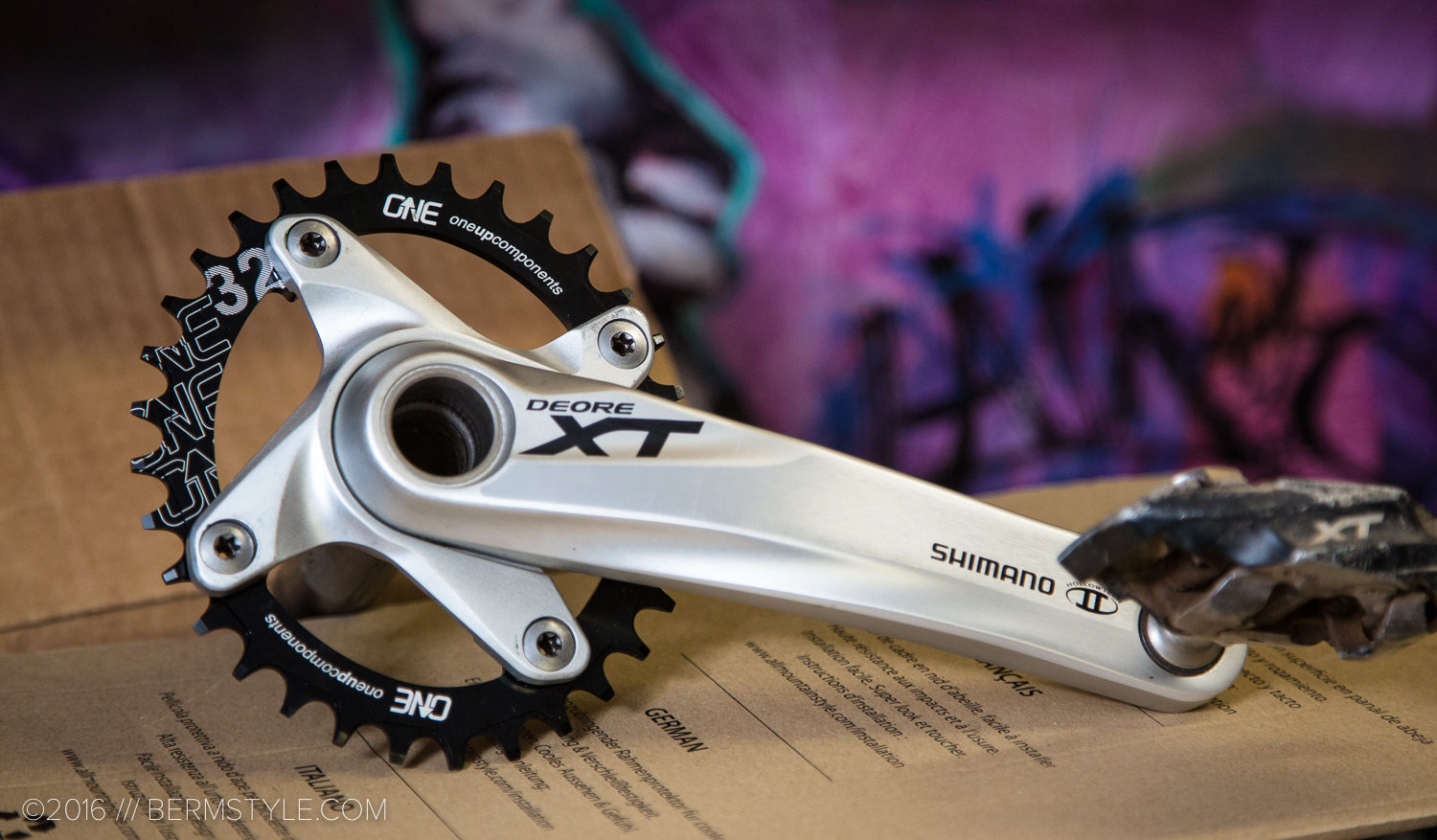 The Traction Ring mounted to a Shimano XT crank.

The idea behind oval rings is they minimize the dead zone in your pedal stroke so that you pedal more efficiently and deliver more power. That concept carries through here as well; the oval 32T ends up delivering power in line with running a 30T-34T tooth round ring. Seeing as how I’m always wishing I had a 34T on descents and a 30T on the climbs, it sounds about perfect.

Like other rings designed for 1x drive trains, the Traction Ring has a narrow-wide tooth profile to aid in chain retention. It also is threaded, which eliminates the need for bolt hardware and simplifies installation. 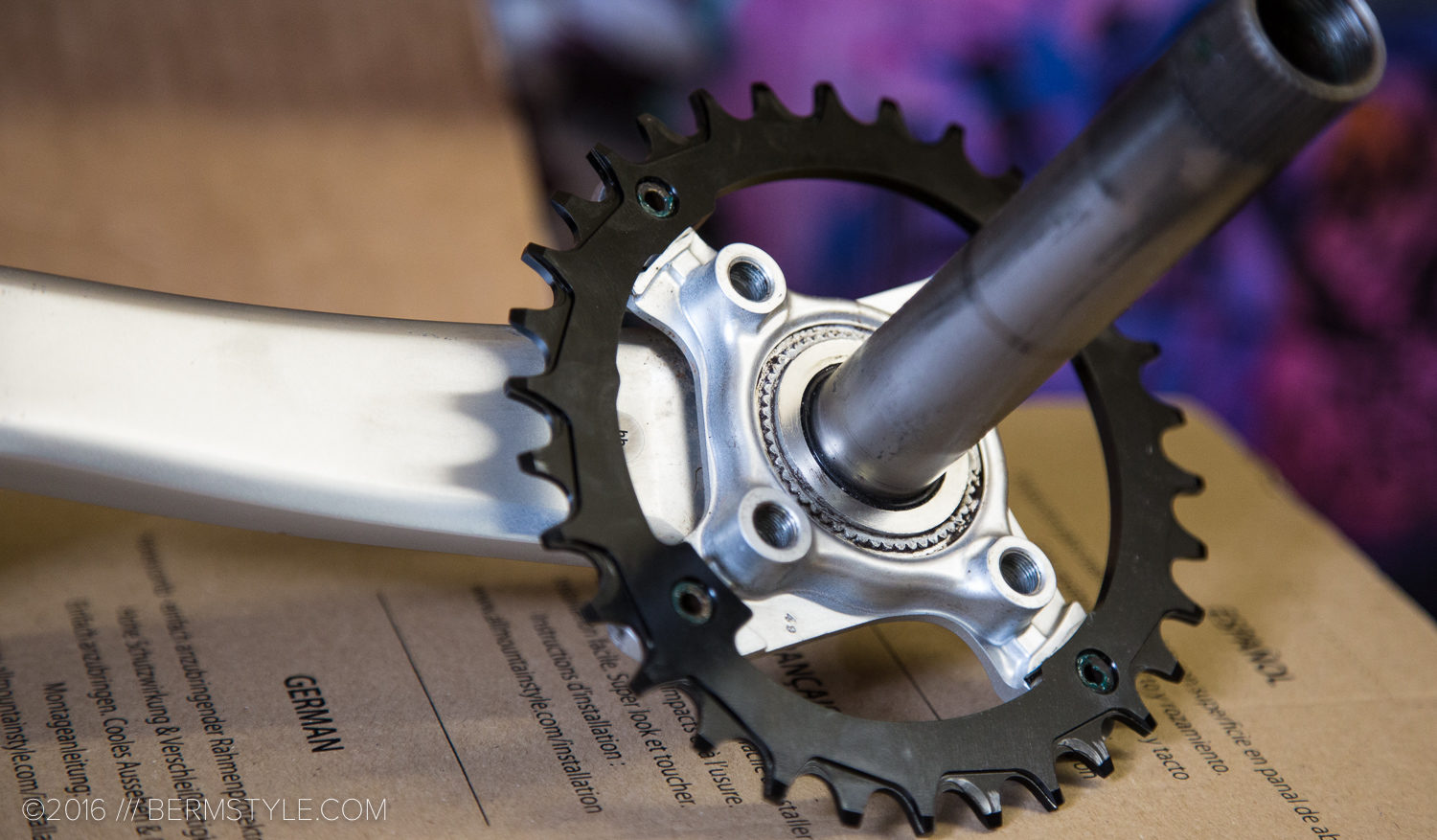 Installing the 104 BCD Traction Ring was as easy as it gets. The 32T ring (tested) has integrated shims and bolt threads, and you simply align the small bump with the crank arm. I initially ran it on my Santa Cruz Nomad, which already had an E*thirteen chain guide mounted on it, and I didn’t have to change settings on the guide at all. 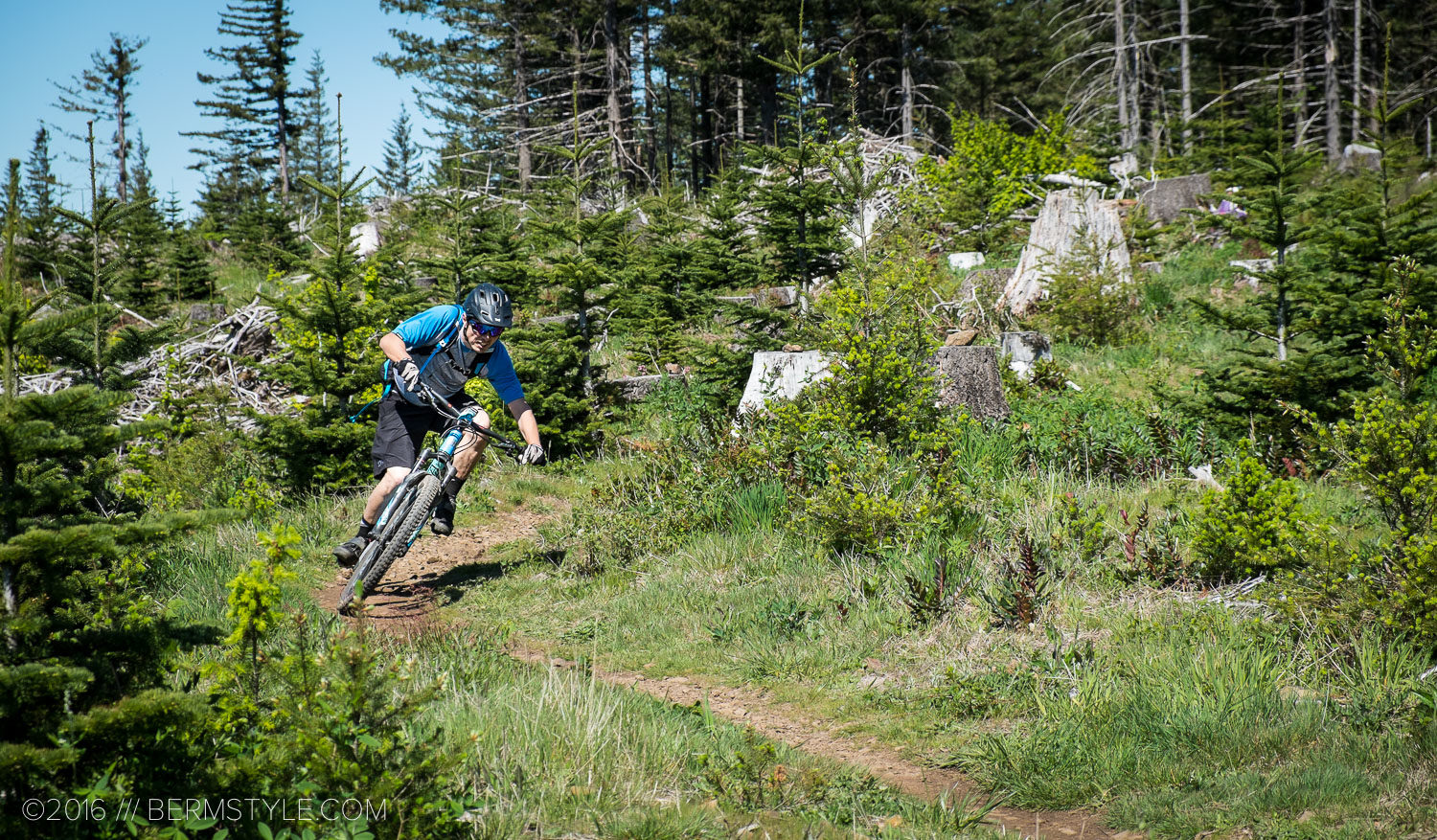 I haven’t experienced a dropped chain with the Traction Ring to date.

First impressions of the traction ring after getting off a typical round ring? Well, initially it felt a bit different to pedal. However, the feeling disappears quickly on a long climb. The best gear is the gear that doesn’t interfere with the ride, (while enhancing it) and the Traction Ring passes the test with flying colors. It also did feel like I had a gear lower than a 32T, performing as claimed.

The recent addition of a Santa Cruz 5010 to the quiver made a perfect opportunity to test the retention qualities of the Traction Chainring, as I was looking to save weight on the bike anywhere I could. The question: how would it perform without the use of a chain guide for trail riding? 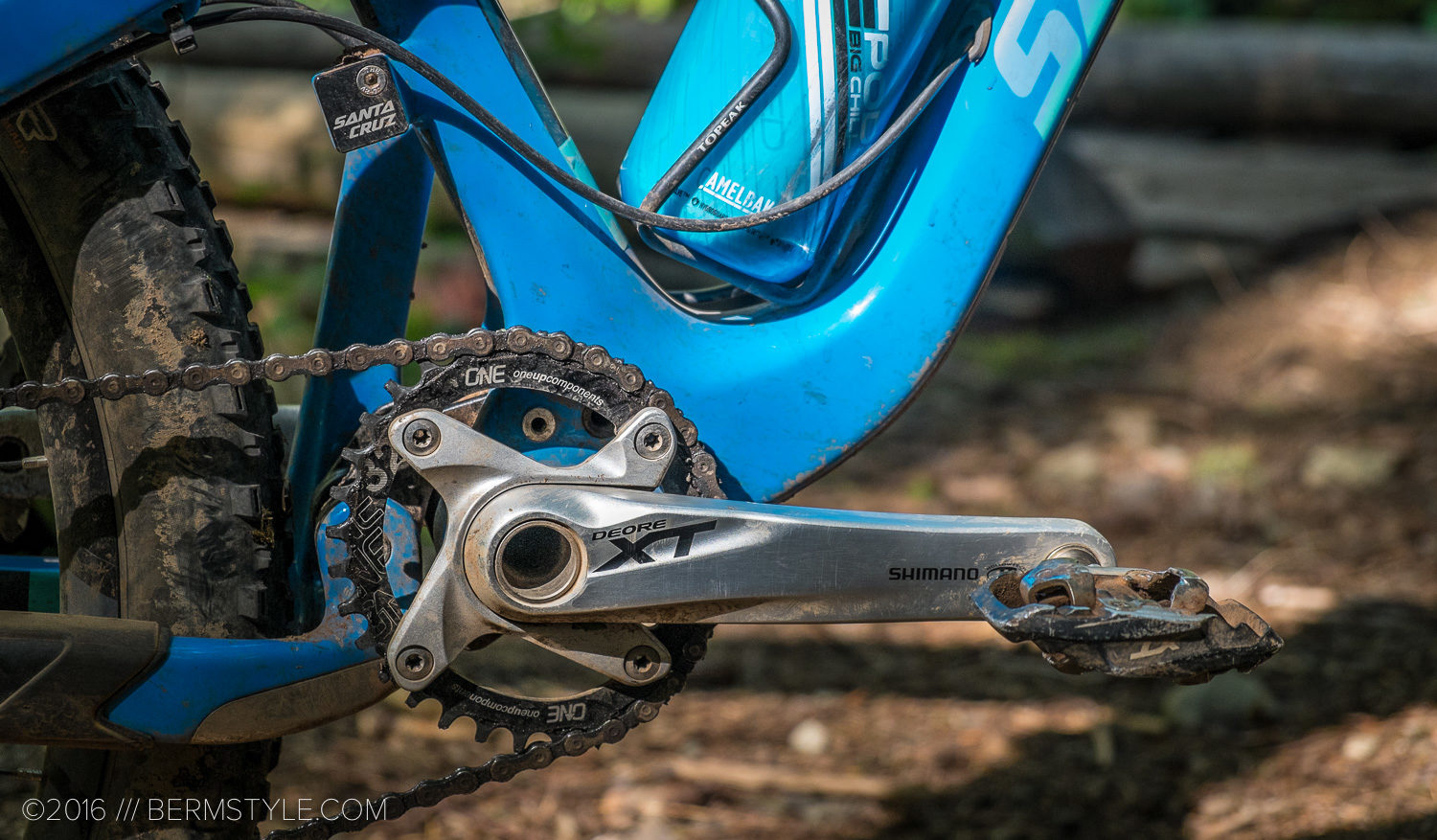 I really need to give my drive train a bit more love.

Like other narrow/wide rings we’ve used, the narrow/wide tooth profile helps keep the chain on, and minimized chain drop. In fact, since migrating the chain ring to the 5010, I have yet to drop a chain. The combination of the Traction Ring and the stock SRAM GX derailleur and chain has been a solid pairing. For the record, I’m not driving this bike as hard as my Nomad, but I’m not taking it easy either.

Due to injuries I’ve sustained in the past from losing chains at the worst time possible, I’ve always run a guide on my bike. I have yet to feel the need for one, though as the teeth wear down, I may add a light weight minimal guide like the Low Direct Mount model offered by OneUp for some insurance. 20 grams is worth the peace of mind.

I did experience some grinding noises during muddy conditions this winter, but since the weather and trail conditions improved it’s run quietly. I haven’t exactly been doing a great job keeping my chain clean, so that was likely attributed to my lazy bike mechanic. (me) 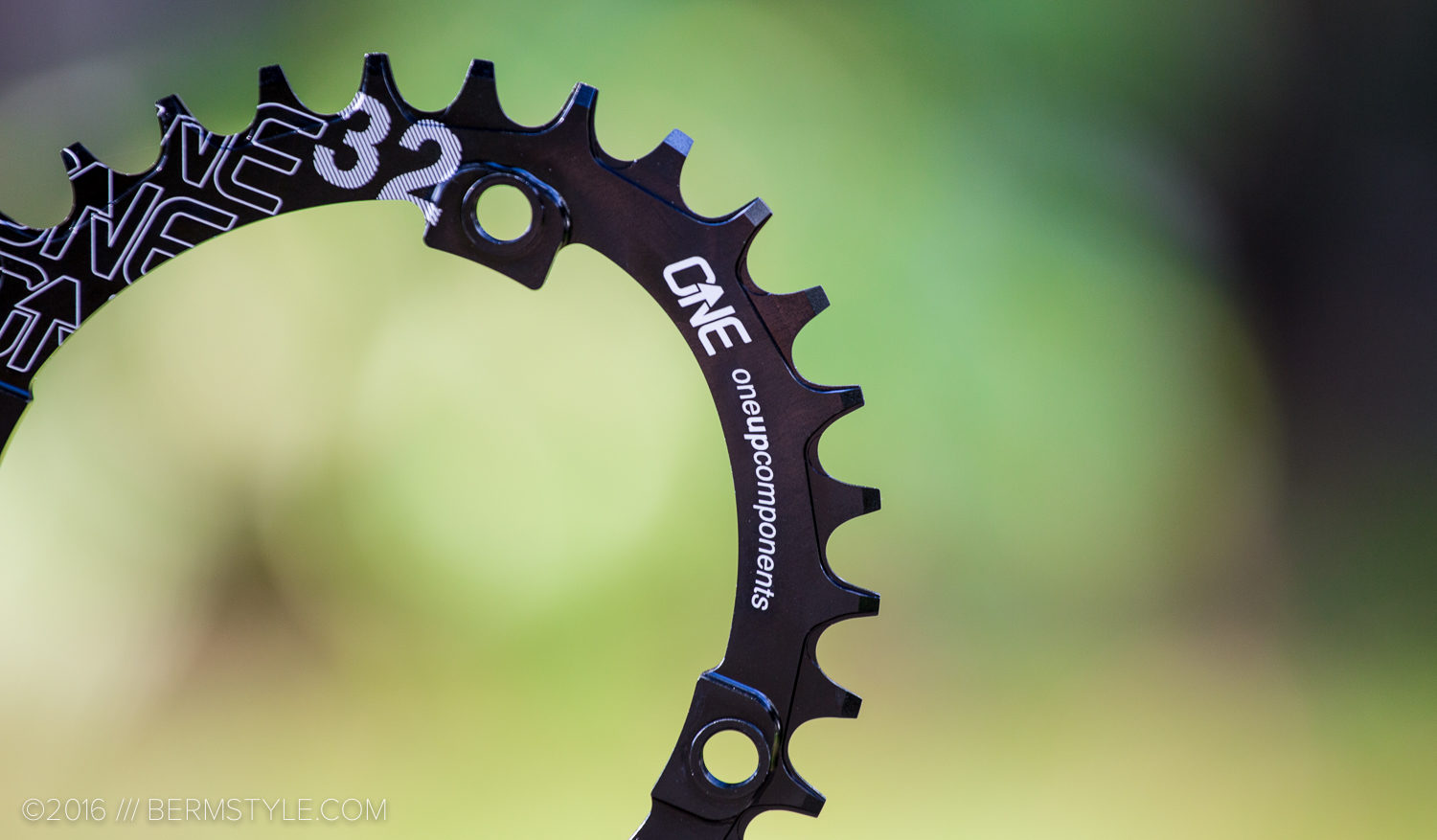 Overall, the Traction Ring works as promised — it’s a chainring, and it helps smooth out your pedal stroke. I should note that it didn’t play well with my chain guides that had bottom rollers (like the new MRP SXg) but I didn’t make an effort to find a fix or a way around it, and instead migrated it to a different bike as mentioned previously. Most of us don’t run full blown chain guides on trail bikes, so it isn’t much of an issue.

In the last few weeks the ring has found a spot on my XC hardtail; as usual, I’ve forgotten it was on there, and the chain retention qualities still continue to impress. I even raced it last weekend without an issue.

Full disclaimer: OneUp provided the Traction Ring for the sake of this review. That said,  at $58.00 USD, the OneUp Components Traction Chainring lives up to the promises and simply works. If you’re on the fence on trying one out, you won’t regret it. I like enough that I’m looking to pick up a 30T version for some big rides.

Check it out at OneUpComponents.com