Count us in as fans of the new apparel line from Giro. With their timeless approach to aesthetics and contemporary use of classic materials, this isn’t your grandpa’s old cycling gear. These days manufacturers like Giro are taking advantage of hybrid fabrics that utilize materials like merino wool, polyester and nylon fibers to offer performance characteristics with the best of each. Merino wool is naturaly breathable, helps regulate body temperature, and naturally controls odor. By pairing merino with polyester, they utilize the best aspects of wool and gain wicking qualities to boost drying times, while also increasing durability. (if you have a few wool jerseys with holes in them, you get this already)

We recently were presented a with a care package containing a number of pieces from Giro’s New Road Collection to try out on the road and trail. Since then, I’ve worn the ensemble riding to (not to mention during and from) work, run errands via my road bike, and on post work mountain bike rides in the local hills.

Did they change the uniform of riding for me? (see: Giro marketing) No, but they’re great pieces and for the most part, I’m totally psyched on them.

The bib undershort is the star of the ensemble— in fact, any time it’s clean, it’s my first choice for longer mountain bike rides. In fact, I didn’t even ride it on the road, choosing instead to save it for longer mountain bike rides, as the rear pockets allowed me to carry additional water, food and tools handily.The only issue with this bib is that I only have one of them, and because of that, it’s always in the hamper. If you’ve never ridden with a bib, I recommend you give one a try, and that you choose this one. Details like the front fly access and the rear pockets make it stand out from other bibs, and after rocking a bib with a fly its hard to go back to wearing other ones. The chamois is comfortable, and its made locally— this piece is full of win.  I’m not sure I’ve ever worn brand name Lycra, but the textile manufacturer Eschler is based in Sweden and is closely affiliated with Schoeller, (sorry, I just geeked out all over my shirt there) one of the top names in performance fabrics. So, yeah, it’s good.

The best part of the bib is I can leave my pack at home and utilize the rear pockets for toting my essentials. It also means I’ve been able to pair it with my other jerseys that of late have been under utilized in favor of more traditional road jerseys. In fact, the Bib undershort deserves its own post, and we’ll be posting on it more down the road. 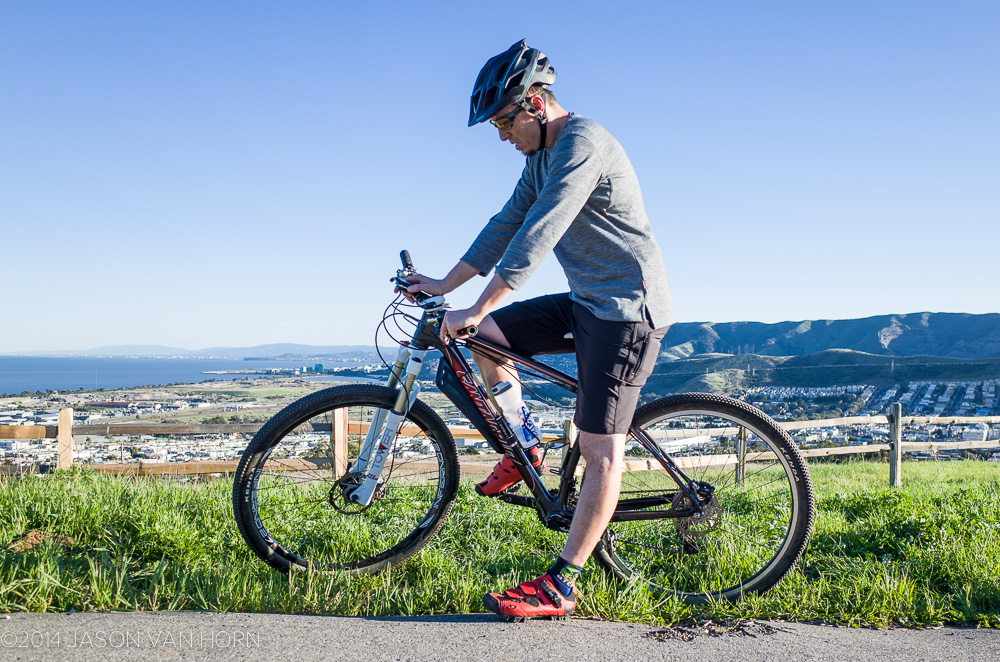 Of all the pieces, the 40M Tech Overshort missed the mark the most for me. This one has me seriously scratching my head. Although I like the fit and feel of the shorts and the four way stretch material quite a bit, the lack of functional pockets make it extremely difficult to committing to wearing it for rides, and well, anywhere for the most part. Although it has a belt and a casual look, it is hard to commit to wearing even to commute. The shorts feature an extremely well placed side zipper pocket, but a lot of additional pockets made it difficult to carry more than a phone or wallet. (there is a small front slot pocket, but it is shallow and I didn’t trust it to hold anything securely)

I took to wearing my keys off a belt loop with a carbiner, but as much as I like the shorts, will probably limit my use of them to the gym or trail running, which is too bad, because they’re great in every other way.

I get that Giro was trying to make them a baggy short that slips over the bib short, but they simply aren’t a very versatile piece, and for a collection that is so functional in every other way, it feels like they dropped the ball here. Looking at the collection, the CA Ride Overshort would have been much preferred for my uses, as it looks similar, but with 2 front and 2 rear pockets. 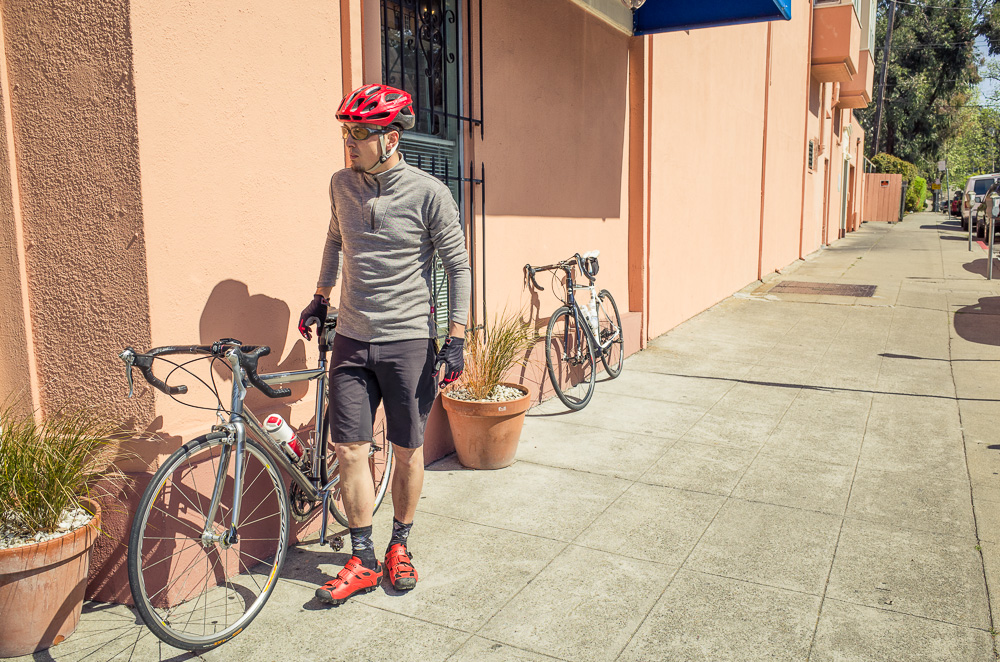 Part of the New Road system, the rear of the top has a zipper pocket that allows you access to items in your bib pockets. If you weren’t aware of the bib and had it separately, it would be a bit strange and not very useful. Like the crew top, it works well as a cycling top as well as a multi-spot top. I’d rock it on a run, hike or snowboarding in a second, and the versatility of the piece is what makes it a good addition to any gear drawer. It has a casual enough look that I wear it to work, and I’m a fan of the fit— it has a slim but not second skin fit that looks trim.

Beside the rear zipper pocket, the other cycling consideration is a drop tail hem. 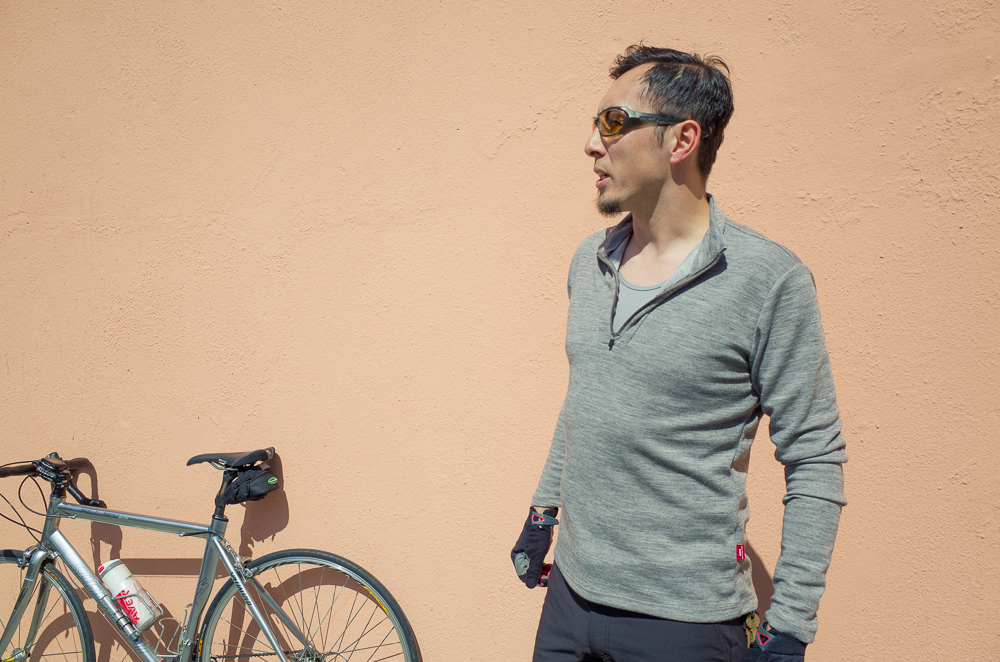 Like the Zip-Up top, the Ride Crew is a basic staple that functions just as well in the gym as on the bike. Best for casual rides and commutes, the crew lacks the rear pockets of a road jersey, and instead is more like the classic sweat shirt you used to own. Except it doesn’t stink and dries quickly— the merino/ polyester blend results in a fabric that wicks sweat handily and dries quickly without retaining odors. Although it could be warm at times, I was surprised that I never really over heated. The fused/ bonded front pocket really excited the fashion designers that saw it, but I could personally take it or leave it, though the pocket could be handy at times. Although you can definitely wear it riding, and it’s marketed as a cycling piece, I’ve been using it as an all around mid-weight casual top that goes in my bag for post trail ride pump track sessions. 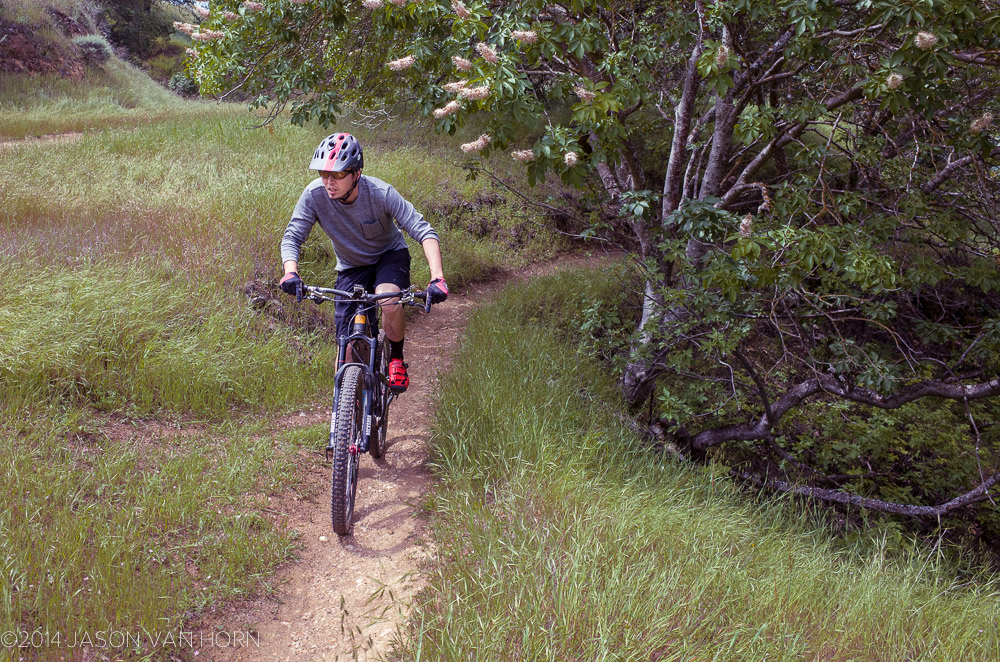 On the trail wearing the Giro 3/4 Top

Like the Zip-Up top, the Ride Crew has a modern fit. That is, it had a trim sihouette that fit well and was comfortable, without look baggy in anyway.

It’s been a great piece for afternoons in San Francisco, and there have been more than a few times I was worried I would get too hot, but it never was that bad. And when temperatures began to cool and the wind started, it also kept me warm enough.

As initially stated, we’re fans of the gear, and aside from the overshorts, the tops and bib shorts go into the gear bag for any and all riding trips. Because the merino tops don’t retain odor, they are great for traveling as you can get away with spot washing them for a few wears before you begin to hear complains about the smell. I wish I could say the same of my other go-to polyester jerseys. While the pieces aren’t cheap, they’re priced inline with similar pieces from Patagonia and other premium offerings. Ironically, I find myself commuting or mountain biking more than anything while wearing the New Road gear. Maybe that’s what they meant by “New Road”?

Since I began writing this post, I also acquired the Peloton cycling cap for use on the road bike, as well as the Wind Vest and CA Ride Jersey to add to my personal stash.