I own a Trek Remedy 08 as you, I found that the only bad point is the rear suspension and I’m thinking on buying the new monarch plus rc3, I like to ride hard and last year I went to the mega avalanche and I had to put more air in the chamber for not bottoming out my suspension constantly, should I buy the normal version without the large volume chamber to get a more solid rear, or the other way, did notice a lack of sensitiveness on the rear wheel?

I hear you Élio. The rear shock as it came on my Remedy kind of sucked. I was having issues with it all the time- when set up with proper sag, the bike would corner and handle great. That is, until I took a really hard hit, and the suspension would bottom out. It turns out this can all be attributed to the high volume air canister these bikes were spec’d with. The stock XV (XV stands for extra volume) offers a larger air capacity which was chosen to give this bike more of a linear rate to the air spring, and for typical riders supposedly works well. Apparently a lot of people have trouble getting full travel out of their shock or something. That has never been an issue for me, in fact, I consistently have the opposite problem. The same XV can issue was something I also experienced with my Intense Tracer VP- the exact same issues. I could set the bike up to corner well, or to handle harder hits. The problem with adding air is that small bump capacity starts to suck.

The current iteration of the popular Fox RP23 rear shock appears to be their highest performer to date. The biggest upgrade over previous models is the addition of the boost valve, which can be adjusted to add damping to the beginning or end of the stroke. I’ve heard mixed feed back on how it works, but theoretically this would be a big upgrade for aggressive trail riders. Especially if like me, you have had issues with bottoming out your rear suspension when set up at the proper sag. Having this option on my 2008 Remedy would have been a nice upgrade, especially since the bike came stock with an XV air can on the shock. I’ve heard great things about the Monarch as well, though I would definitely recommend the standard air can.

While you could certainly try purchasing a different shock, I ended up giving a call to Push Industries and spoke with Darren there. His recommendation was to swap out the High volume XV air can for a standard volume air sleeve. The smaller air can runs $50, which is way cheaper than a new shock, so trying this option was a no-brainer.

Changing out the larger volume can for the standard made a big difference for me. The bike worked quite a bit better for my riding style. It still has the cornering performance, but my bottom out issues were significantly reduced. (There is a reason you won’t see the XV can on Slopestyle or Dual Slalom bikes.)

There is a popular thread on MTBR that addresses this issue as well- it isn’t limited to the Remedy, as I found with my Tracer. Lots of other riders have had this issue as well. Click here to check out the thread. The approach these guys have been taking has been to shim the XV air can, which effectively does the same thing- it reduces the air volume. They both have the same results- a shock rate that ramps up at the end of the stoke, reducing bottom out. There is also another great thread here, that Darren at Push chimes in on, with a cool graph demonstrating air spring curve rates.

There are better options than both of these those. Push offers a tune that can set up your RP23 exactly the way you want it to. Their big air tune offers a conical bumper system that aids in bottom out control. The big hit tune runs $179. I have a feeling they’d tell you to change the air can out as well. You definitely have a few options with your current shock, which is a solid performer, it just needs to be set up the right way for your riding style. You can always give the guys at Push a call too. They have heaps of suspension knowledge, and are super helpful.

Swapping out the air can/ Float Air Sleeve Service

Swapping out the air can and/or installing new seals on the RP23 is pretty easy.

The first thing I did was to remove the lower mounting bolt and depressurize the air can. Make sure to get ALL the air out.

Placing some padding beneath the shock, I unthreaded the air can. Again, make sure all the air is removed. If you are replacing seals to fix a “stuck down” Float or DHX Air, there will be a bit of air trapped in there, and there will be a solid POP when it comes off. I left my shock bolted in for leverage, since I don’t have a vice at home.

At this point I removed the shock completely and slide the air canister off carefully.

At this point I cleaned everything and prepped the new seals by covering them with Float Fluid. Using my dental pick I carefully removed the old seals and replaced them with the new ones.

Then it was just a matter of carefully reassembling everything, using plenty of fluid on the seals. If you are mechanically inclined and do all your own maintenance, it’s too hard to do; in fact, I had to deal with a stuck down shock in Moab once. Fortunately the local shop had a seal kit and I was able to replace the seals in the parking lot. It is a lot easier when you aren’t doing this in a windy parking lot. 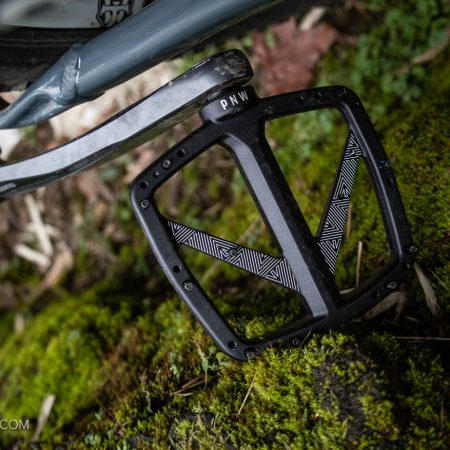