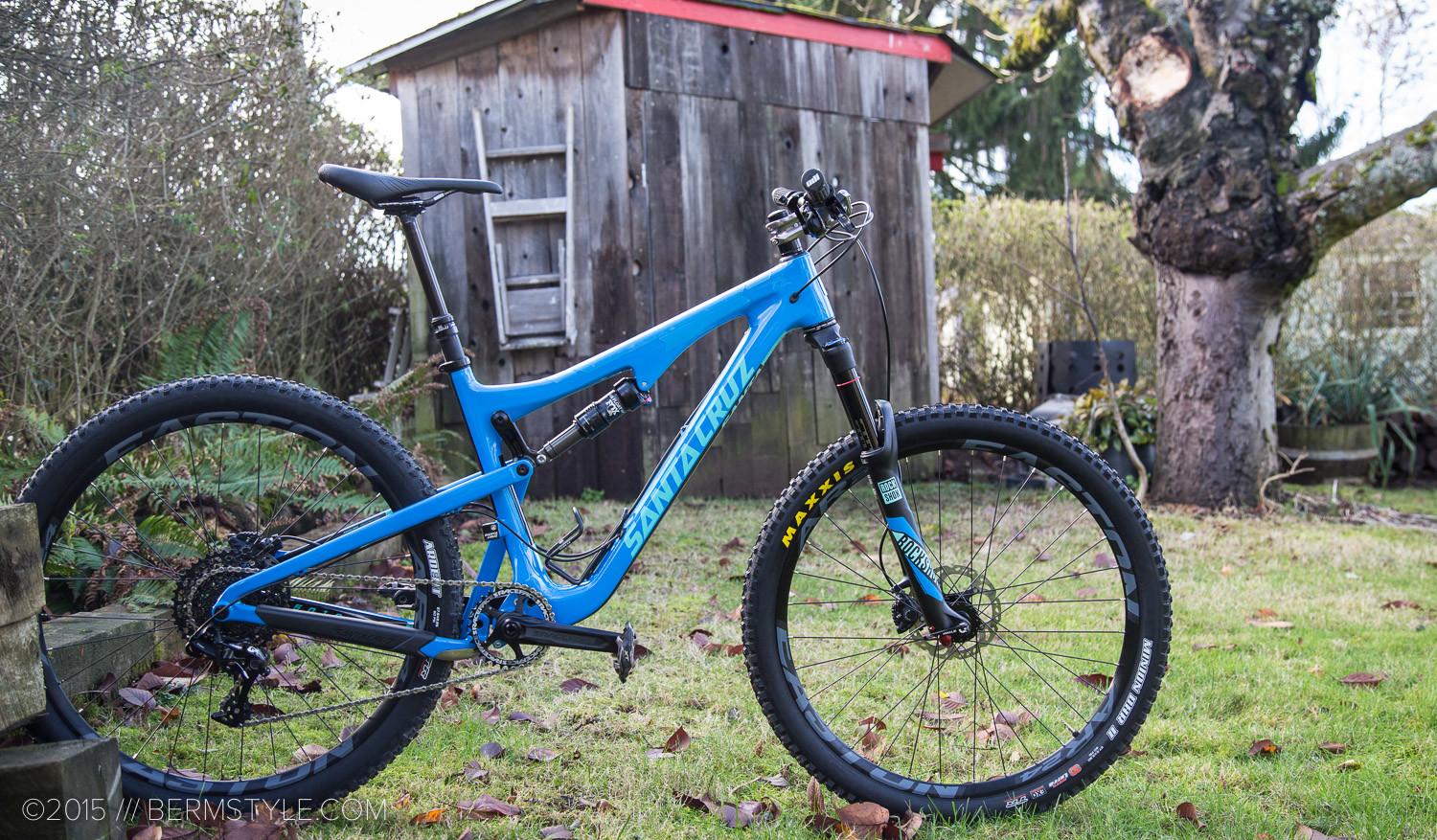 Earlier this year we got to spend some time on the new 2016 Santa Cruz 5010 CC. Equipped with top shelf components and premium carbon wheels, it was a dream bike, but with a sticker price of $10,000.

That’s a hell of lot of money for a mountain bicycle.

Fortunately, you don’t need to spend that much to get your hands on one, though if you’re looking to read reviews on the new 5010, you’ll be hard pressed to find a review of the bike equipped with components most of us actually use.

Our review will be a bit different than those ones. We paid for the Santa Cruz 5010 C with our own money. 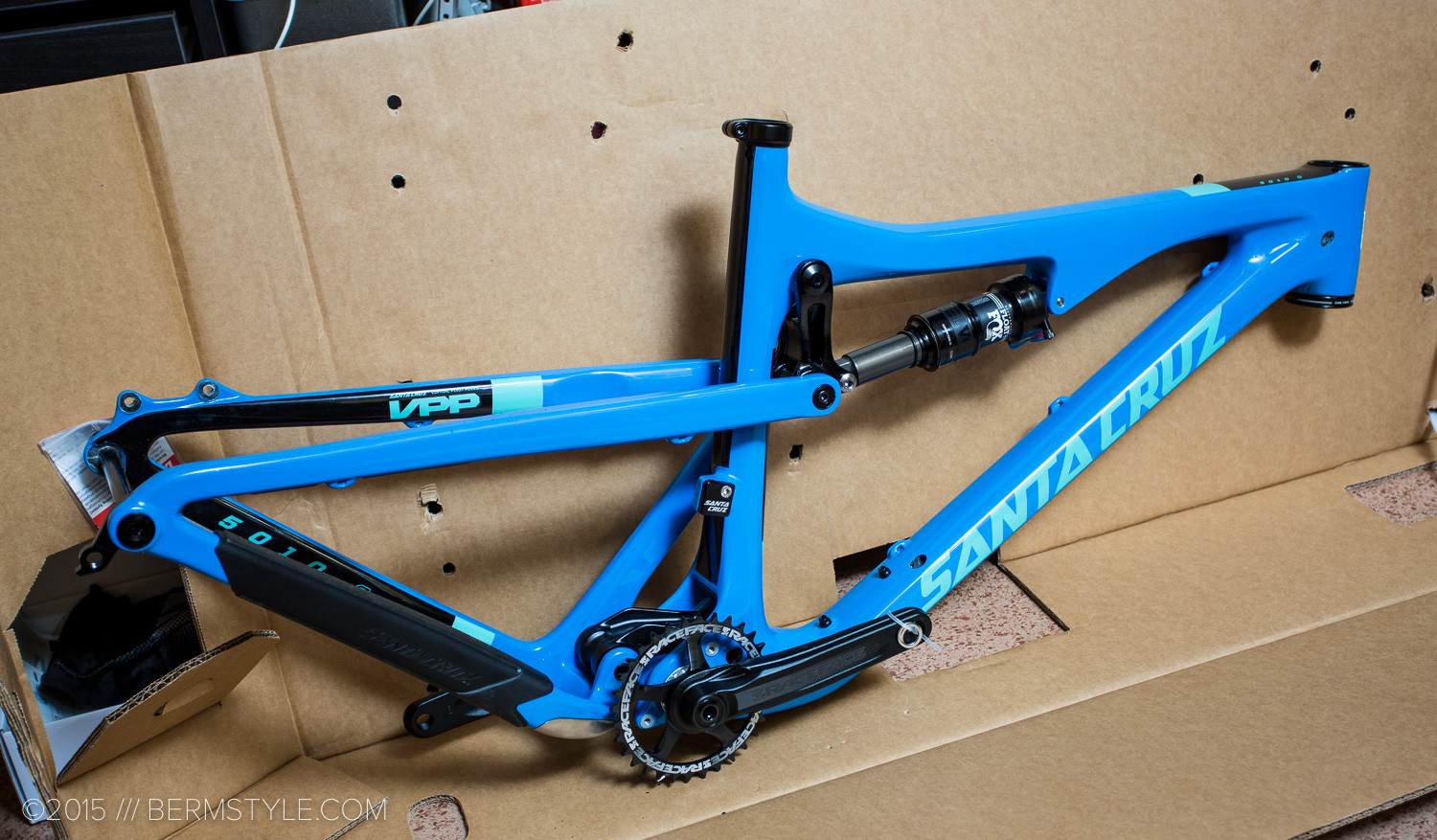 First off, a disclaimer: We’re in the industry and get deals on bikes. They’re still expensive though, and like most riders, at times it can be hard to justify the cost of of these things. Fortunately it’s possible to spend way less and get practically the same performance as the super bikes. The new Santa Cruz 5010 Carbon S is priced at a price point much more inline with what the typical rider can afford. And although the frame’s a little heavier, it’s pretty sweet. 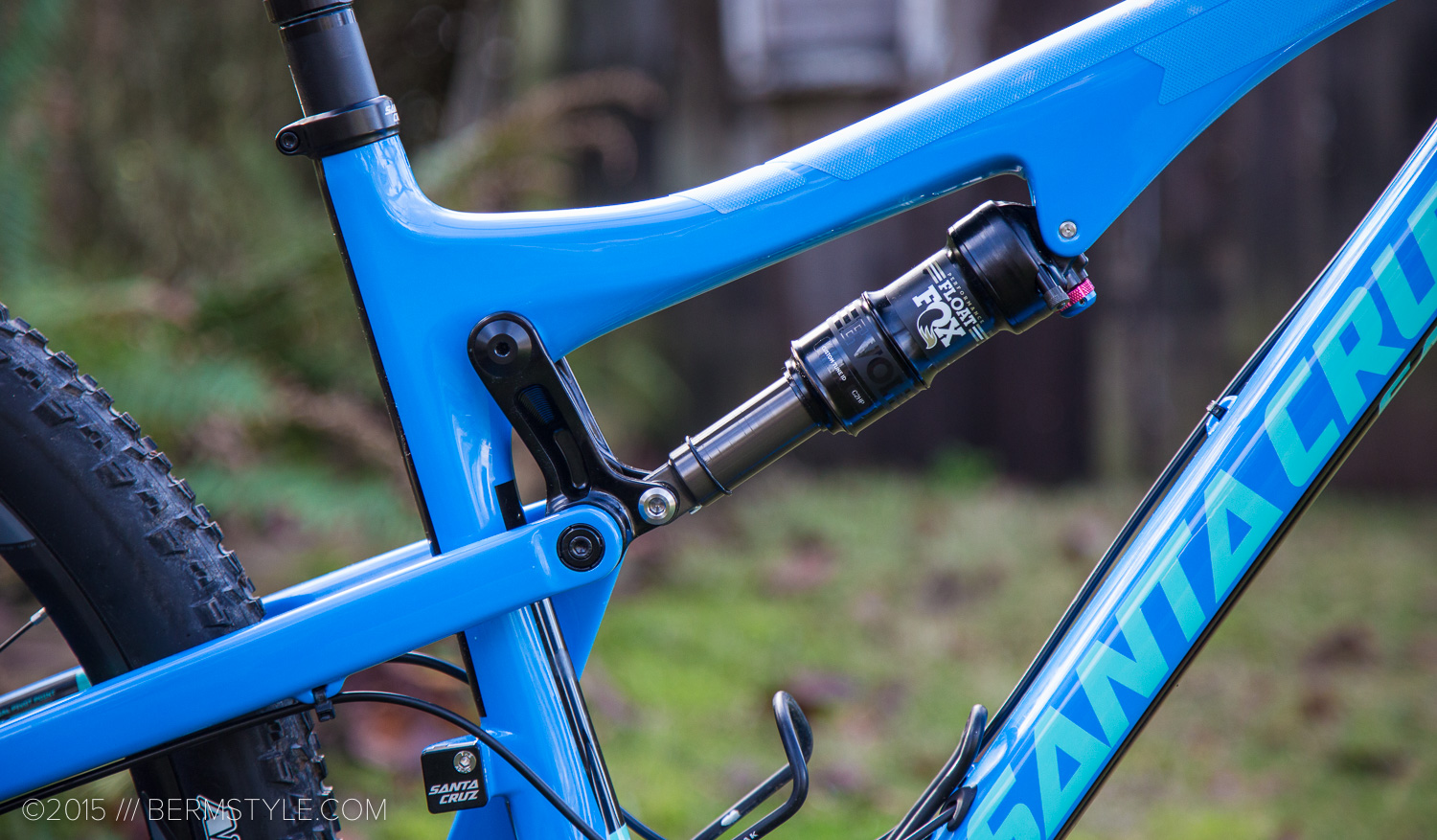 The least expensive iteration of the 5010 C starts at $3,600. It may seem substantial if you’re just starting to shop for a bike, but it’s inline with what a quality mountain bike with a carbon frame costs these days. And when you consider the premium version of the frame alone will run you $3,000, spending another $600 for a complete bike seems like a bargain on comparison.

For many riders the entry level “R” build kit will be enough to get them started. Down the road they might want to upgrade the fork though. And you’ll need a dropper post, so add another $300-$400 for one. 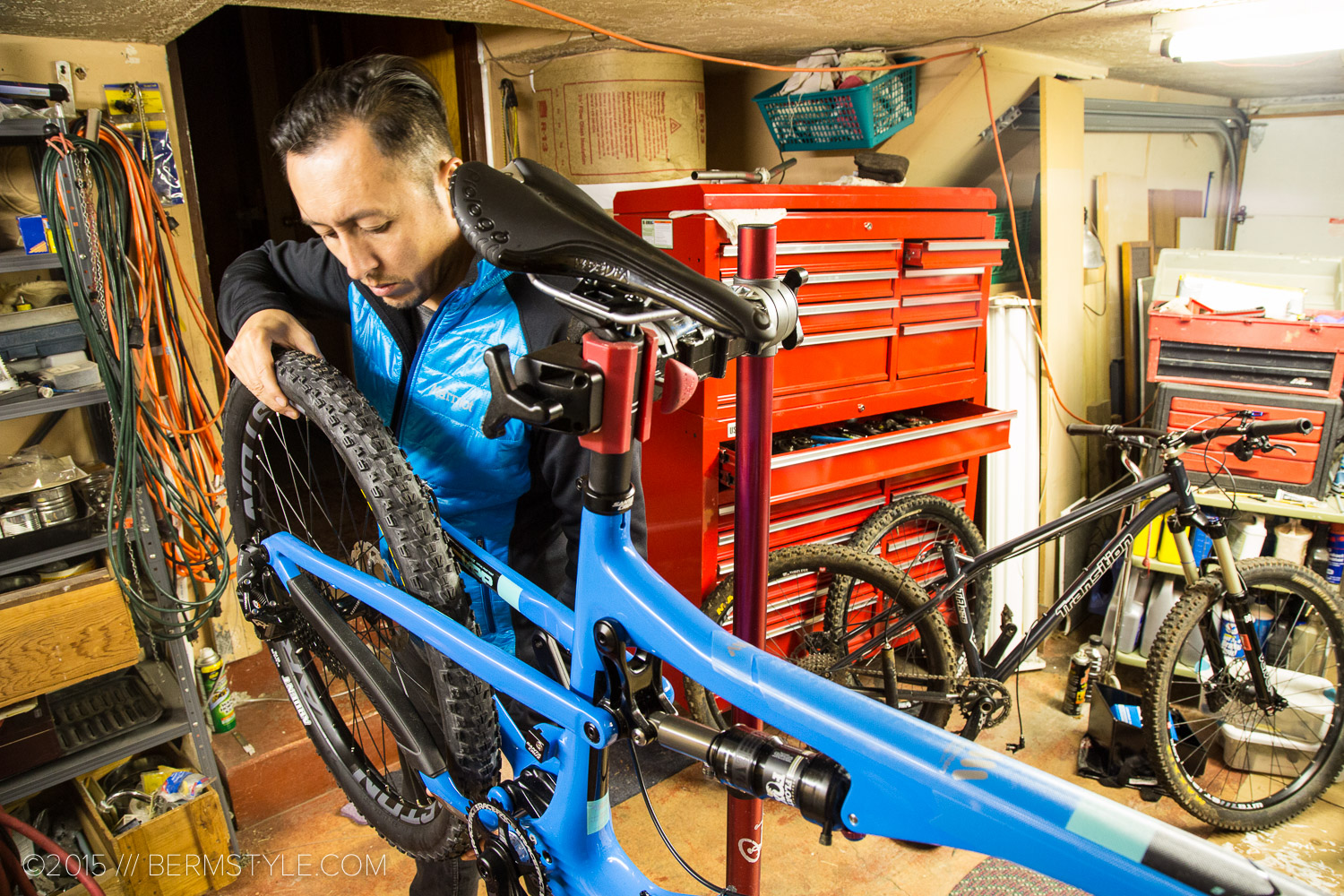 Assembling the 5010. Yes, I already have a jacket in the same color. Wait until you see the matching kit(s).

If you were to start with the “R” model, just upgrading the Pike and Reverb post alone ($600+$350) would make up the bulk of the cost. For a more experienced rider, the “S” build kit makes the most sense, as it comes ready to rock out of the box. For $1,100 more, but you’ll get the acclaimed Rockshox Pike RC fork, (fewer adjustments but same listed weight as the version with the more expensive damper) height adjustable Rockshox Reverb seat post, 1x SRAM GX drivetrain paired with a Raceface Aeffect crank, and an upgrade from Deore to SLX disc brakes. 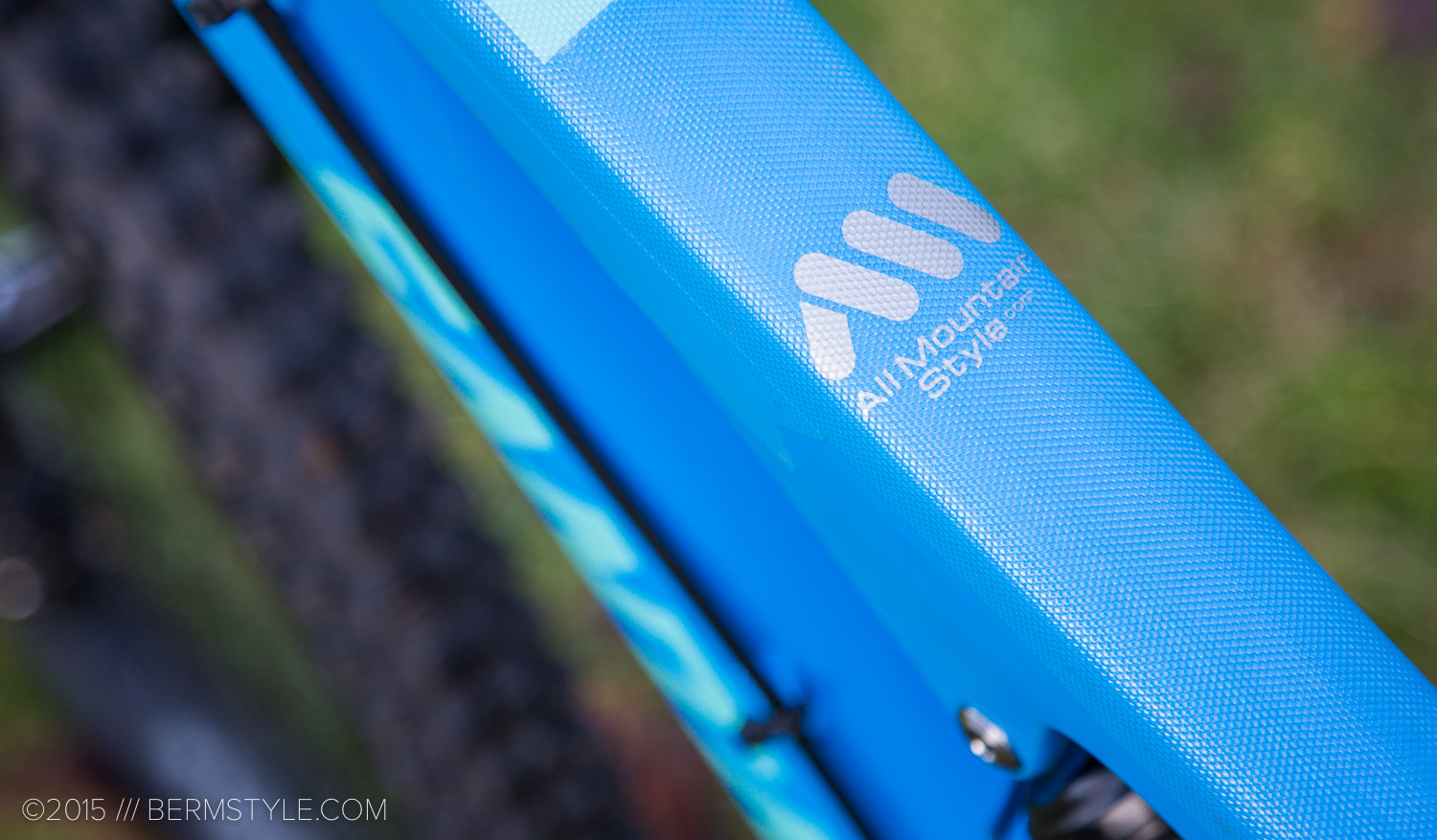 The frame wrap protection from All Mountain Style has a sharp looking honey comb texture and is inexpensive insurance for your carbon frame. A review is in progress…

Assembling the new Santa Cruz was a pleasure, especially after working on other bikes. I can’t remember a time a bike build went as easy or smoothly as this one did. The internal cable routing on new Santa Cruz models continues to improve and amaze; it’s simply the best I’ve ever seen. Installing the rear derailleur cable and housing is a cinch, as the frames have fully guided internal routing and installing the housing simply requires pushing it through the frame. I didn’t even need to grease the housing, as the new grommets are now split, and can be installed after the fact. 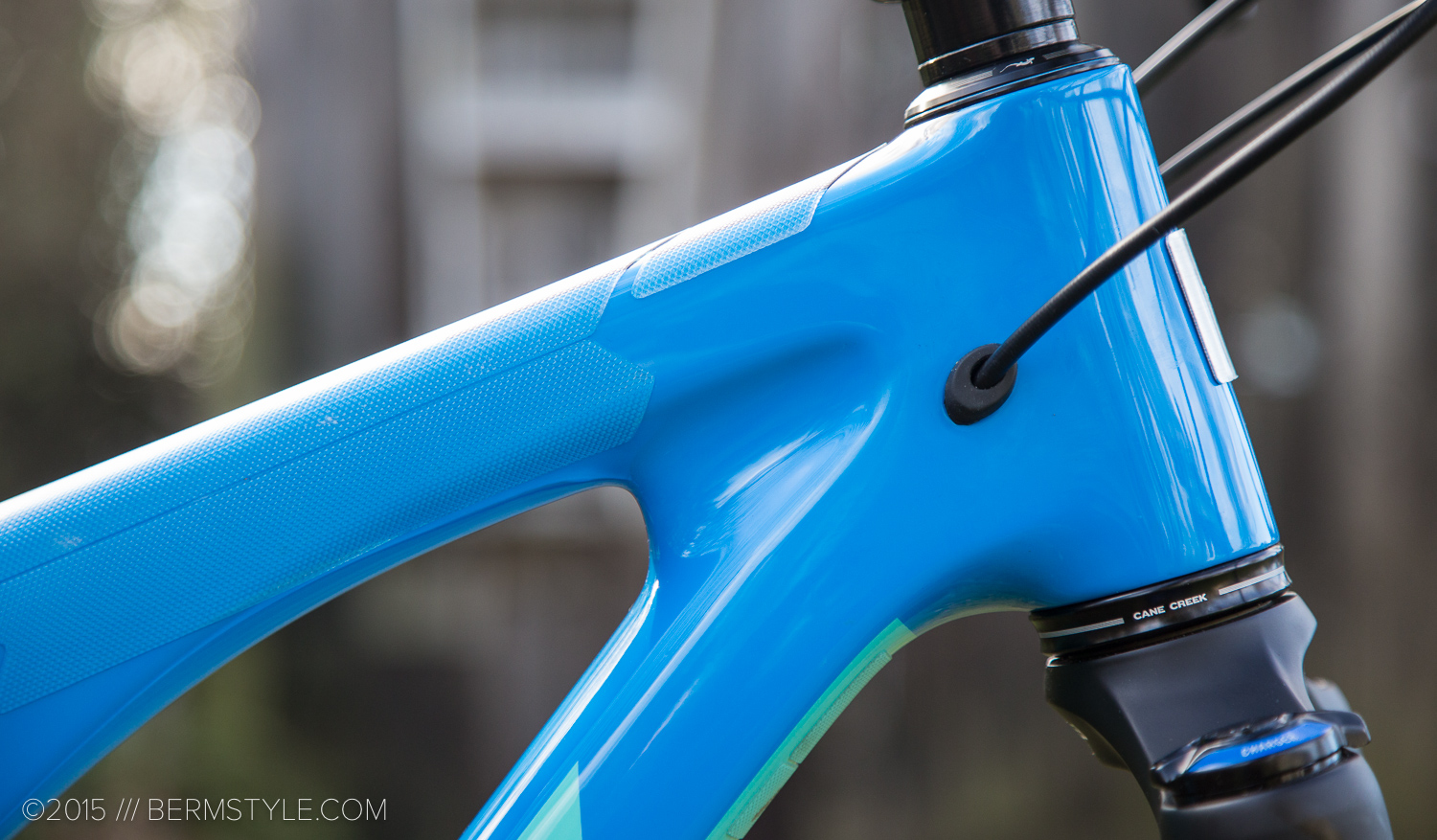 Even the grommets for the internal housing have been improved on the new iteration of Santa Cruz models. So clean.

Like the Nomad, the rear brake line is routed externally and attached to the frame with zip ties. British riders or those that run their brakes moto-style won’t be as pleased, as the guides are optimized for right side brakes, but for the rest of us, it’s perfect. I wasn’t able to fit the caliper or lever through the rear triangle, (even with the rear shock removed) so I ran the housing along the outside of the stay, with a bit of 3m protection added to the frame to protect against scuffs.

One of the first things I’ve been doing with new frames is adding a bit of extra protection. A company called All Mountain Style makes an adhesive frame guard with a cool, honeycomb texture that looks great, while adding scratch and impact protection. (in depth review coming soon; full disclosure — my partner Inga is a brand ambassador for AMS)

We’ve been running the AMS Frame guards on all of our carbon bikes and it’s a great product. 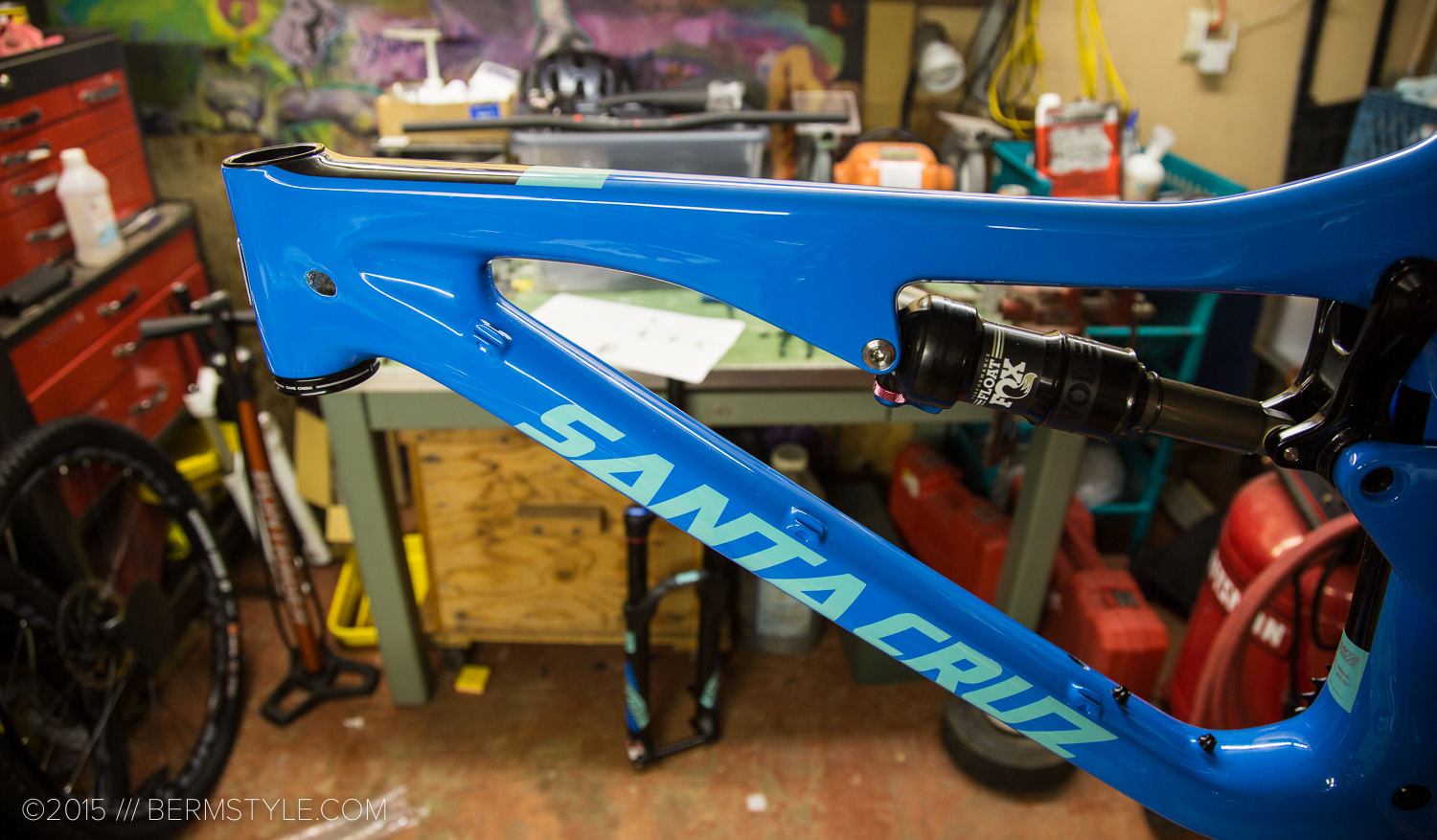 The entrance port for the Reverb Stealth line

Although we’ve had our issues with the Rockshox Reverb, (Slow in cold weather, plus 3 of ours have developed sag after about a season of regular riding which then requires a complicated rebuild) when they work, they’re solid. The post that came with the 5010 is the newest iteration that features a major upgrade, a coupler that makes installing or removing the post significantly easier. Installing previous models meant devising some sort of guide cable to push through first, and then using a threaded connector to feed the actual cable though. With the new version, I just pushed the cable into the frame.

The internal guides on the 5010 v2.0 route the exit port upwards in the seat tube making installation easier than ever, and it was just a matter of attaching the cable to the post, then shortening the line on the lever side. I didn’t even need to bleed the remote lever, though I probably will in the spring, to maximize performance.

The rest of the assembly went together as easily as it gets. Even setting up the tubeless tires. In fact, since I have a compressor I didn’t even use soapy water to set the tires up, I just added a bit of air. 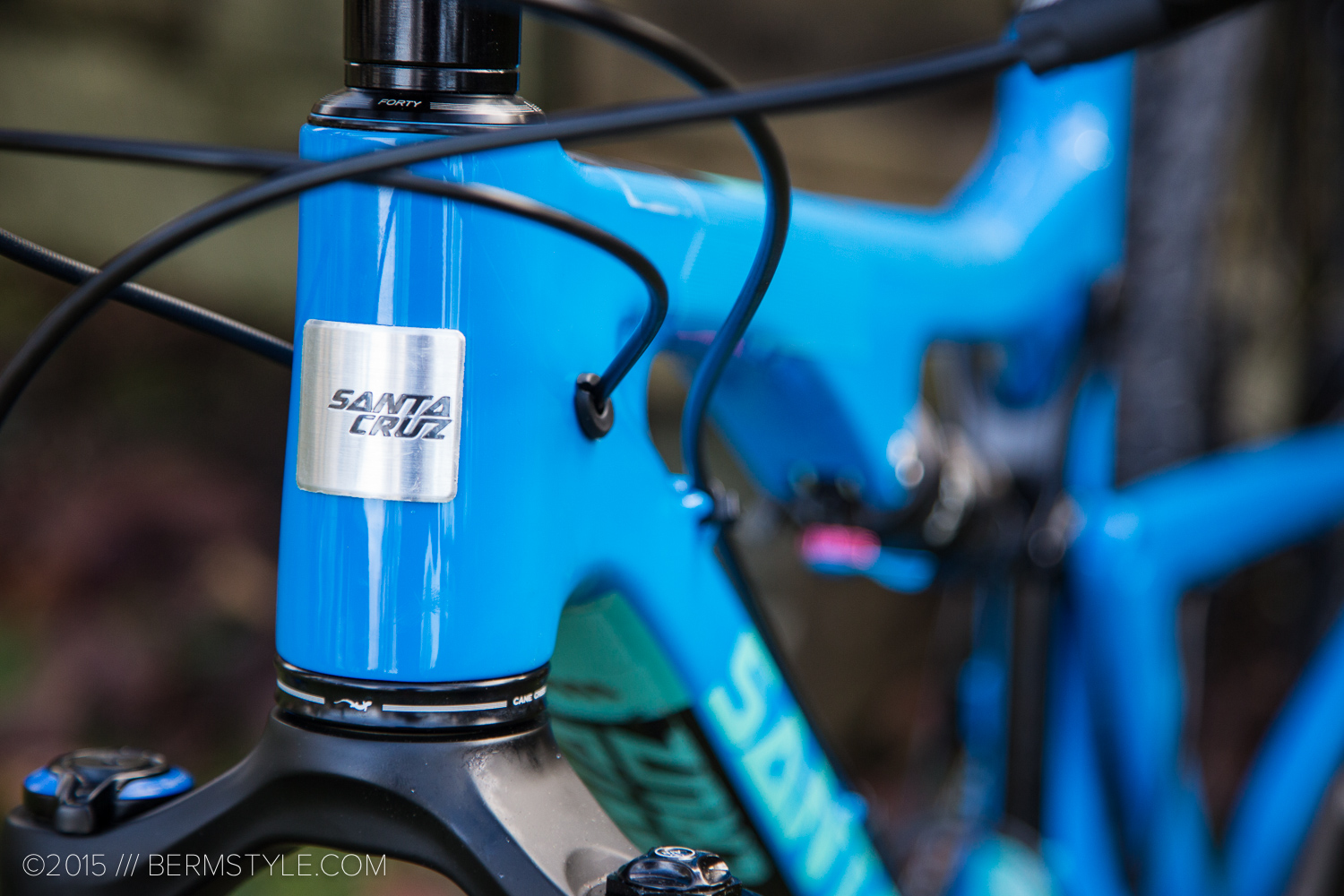 The cable routing is SO dialed on these new models.

First Ride – how does it ride compared to the Nomad?

The first ride on the bike was great. As I previously wrote after my time on the flagship CC version, it feels like a lighter (although it might not actually be lighter in weight) more playful version of the Nomad. I felt at home almost instantly, though I still have much tweaking to do with my suspension. Note that I’ve been rolling on VPP bikes for the last few seasons, and have a strong personal preference towards the suspension characteristics of this type of design.

With the stock 60mm stem/wide bar cockpit, it handles great, and even when getting my drift on over off camber leaf covered turns. With less travel than the Nomad, loading and unloading the suspension quickly offers a poppy feeling that you don’t get with longer travel bikes, making it easier to bunny hop and jib down the trail. With almost the same spec as the Nomad and Bronson though, for the most part it has a similar “feel.” 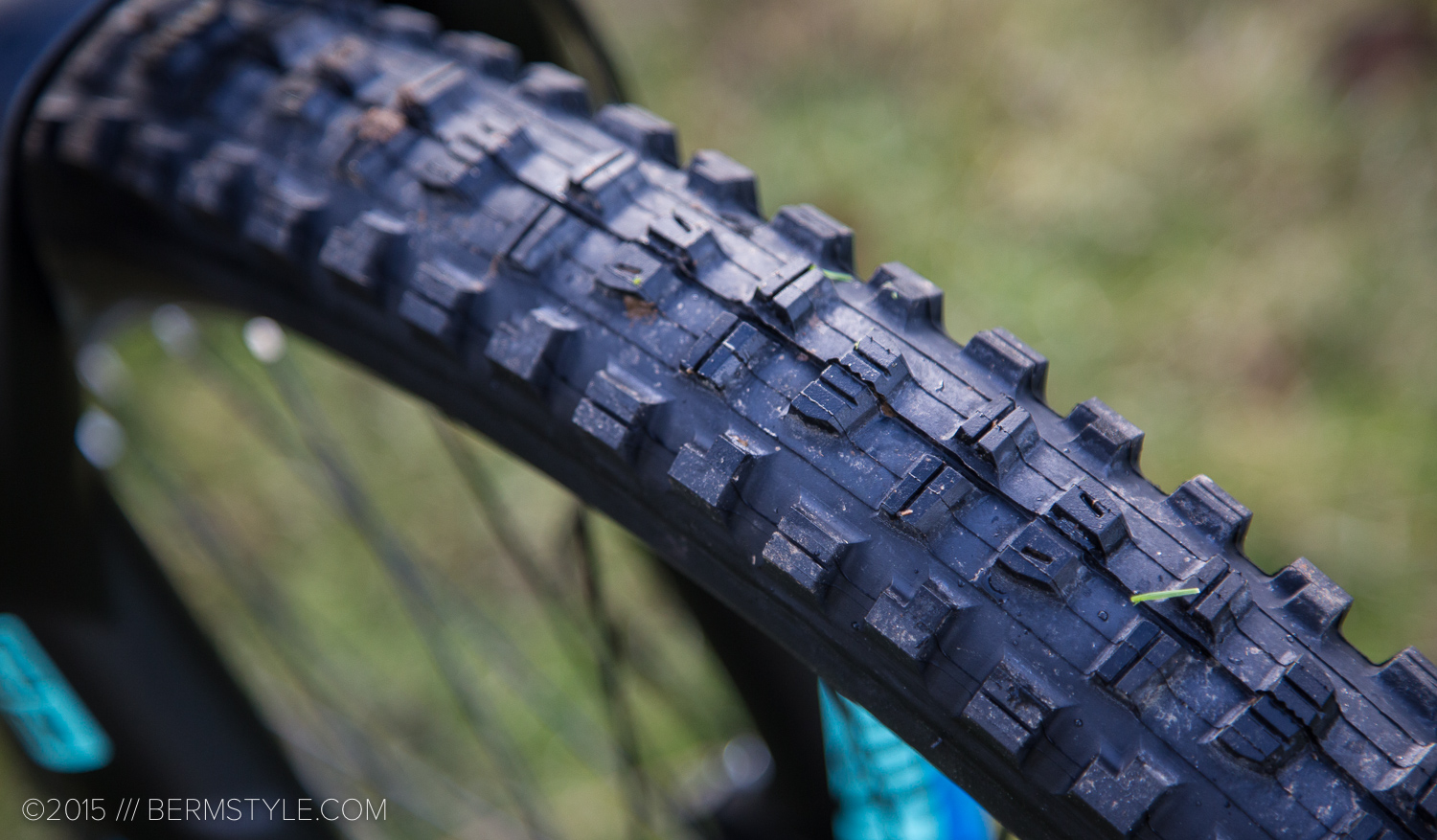 Maxxis treads mean this thing is ready for business. This was the easiest tubeless setup ever; just adding air- though I did have the help of a compressor.

The 5010 feels a lot like being on the Nomad, with less travel. Whereas the Nomad has to be going Nomad speeds to come alive, the 5010 is lively from the get-go.

With longer travel trail bikes becoming the norm, for many, the 130mm of travel on the 5010 probably isn’t the ideal one bike solution if you’re charging drops to flat or want take it to the bike park. Riders looking for 650b quiver killer are probably going to be happiest with a Bronson and it’s 150mm of travel. The 5010 could get overwhelmed trying to keep up with longer travel rigs on burly trails or in the bike park. However, on the trail rides most of us do the majority of the time and on groomed flow trails, the slalom bike heritage of the 5010 makes it shine. It all comes down to where you ride most.

I love the Nomad, but I don’t get excited to head out on long steep climbs with it or 3 hour plus epics. It’s an awesome bike, but I missed having a short travel rig dedicated to long XC adventures where I’m always down to take the path untaken. The 5010 has the heart of the Nomad but is perfect for exploring every trail on all day rides. 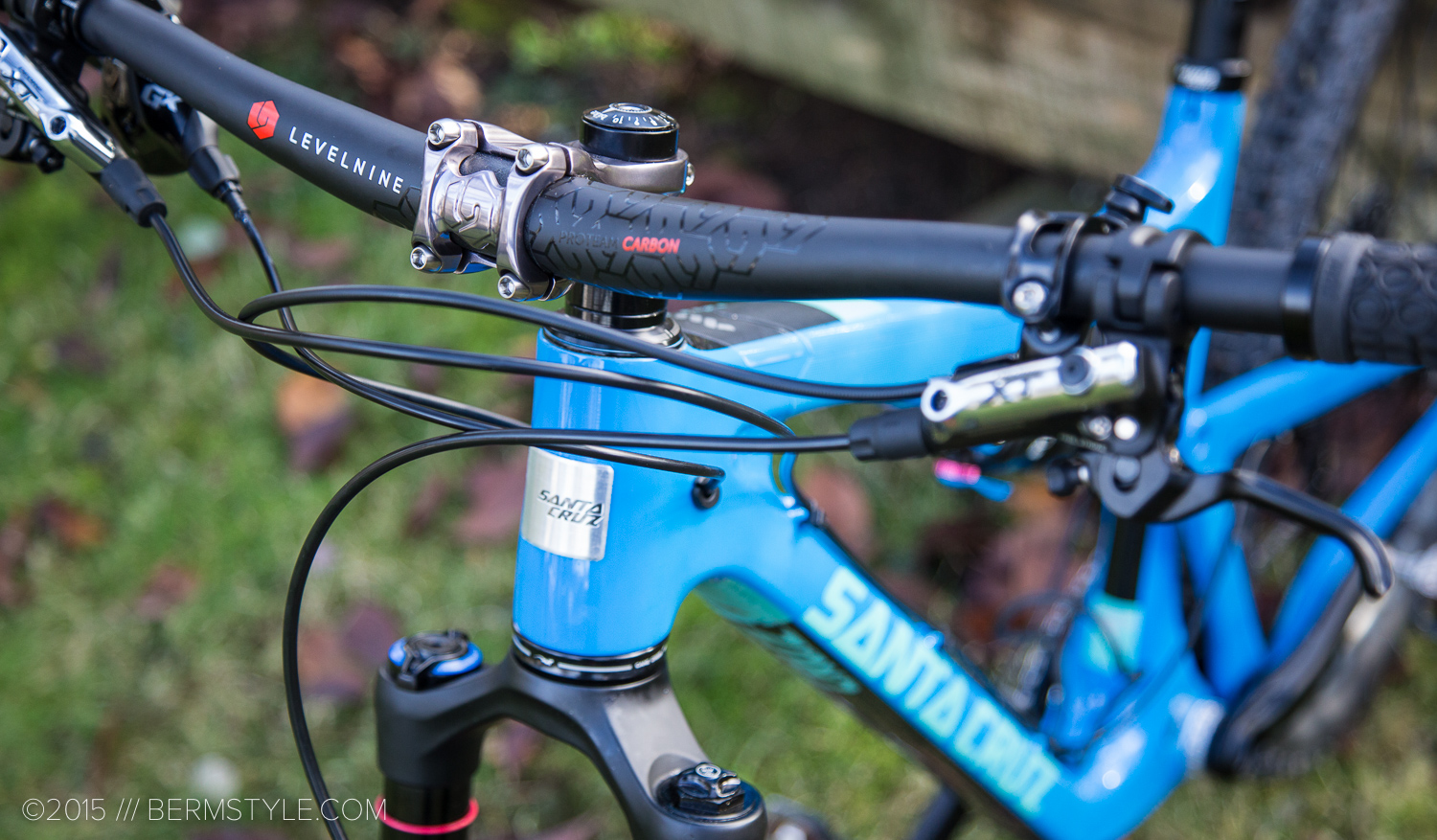 Couldn’t help it: already upgraded the bar and stem to a sweet new cockpit from a new components outfit Level Nine. More on that later: a review is currently in progress.

The 5010 comes equipped with meaty all mountain worthy tires; with lighter wheels and tires it would be even better for hammering groomed trails, and it does feel weird to have essentially the same build kit as my 6″ travel bike. At some point I’ll be experimenting with lighter, faster rolling tires to differentiate the two bikes more. I’m going to be careful going too light though; if it’s at all like the TRc was, it’s going to be easy to out ride the capacity of lighter weight rubber.

That’s part of the appeal of the 5010 though. If you were looking for a full blown XC trail bike, a short travel 29er would make a lot more sense. In fact, I’d even go so far to say that if the term “shred” isn’t already part of your vernacular, you might be better off with a different bike altogether.

The improved geometry is spot on with my personal preferences, and I’m glad I passed on the first iteration of the 5010. 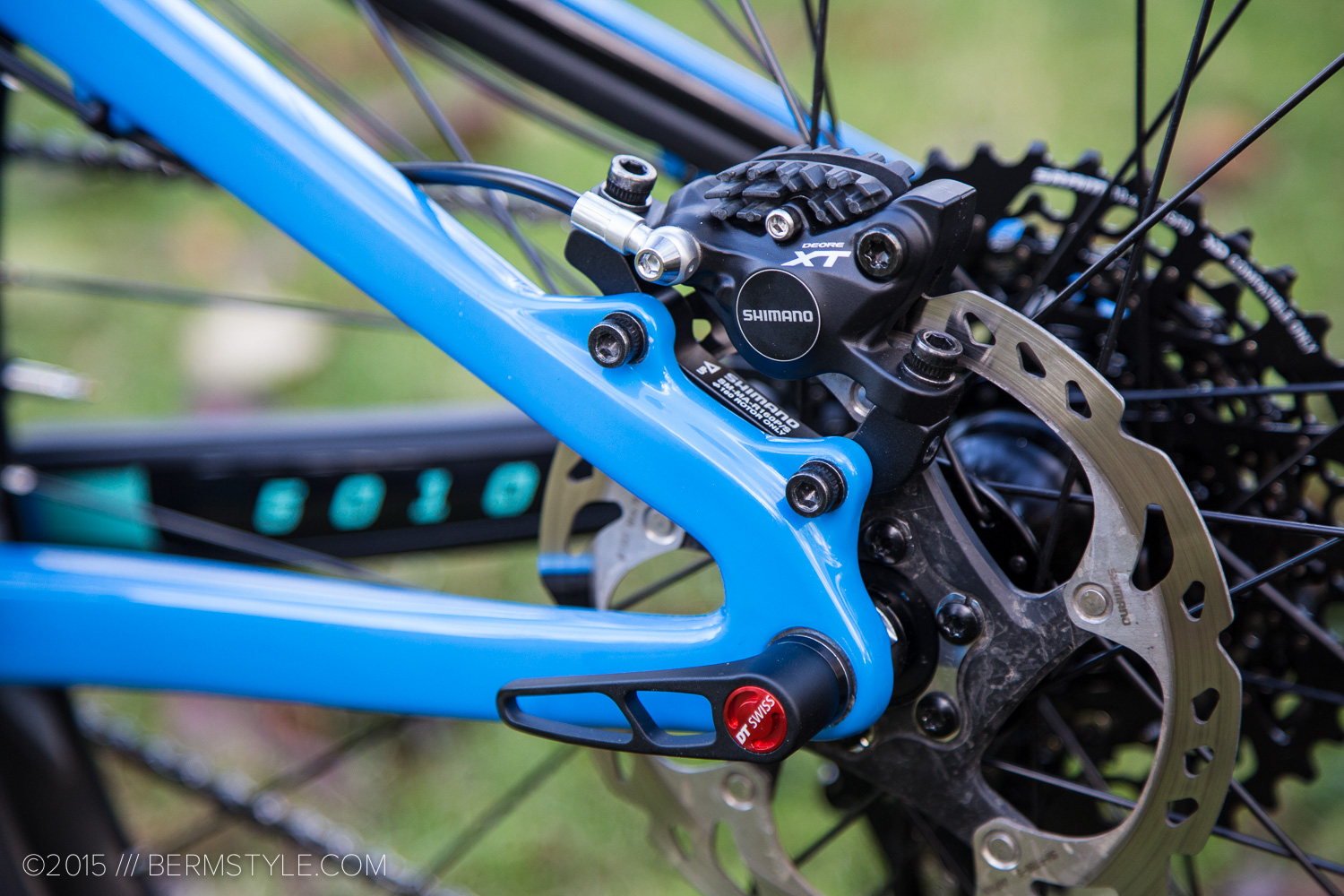 The SLX brakes have the same performance as these XT units. I love these things though and have been saving them for this build for sometime.

How does it climb?

The crazy thing with the 5010 carbon c is that it feels just like the $10k wunderbike I first rode at the Interbike Dirt Demo. (See: First Ride: 2016 Santa Cruz 5010 ) Admittedly, some time has passed since then, but all the things that made me smile on the bike are present in this less expensive iteration.

I do feel the weight of the heavier build though; slapping some light weight carbon wheels would completely change how this bike rides. I’m already thinking about what component swaps will result in the biggest bang for the buck, and shed weight the fastest. And honestly, I’ve already changed out a number of components. Like the typical mountain biker, I’ll be upgrading the bike bit by bit until I have her where I want her, at the corner of Value & Performance. I’ll be doing it a bit faster, as we have a number of products on route for reviews; that is the whole point of being a cycling blogger after all.

In part two, I detailed what we changed out and why. Our goal: match the performance of the super bike as close as possible, while keeping the budget in mind. Our results might surprise you.