It was an early morning when I put the pot of coffee on and hustled outside to load bikes on the car. While my girlfriend Inga got ready, I hastily fried a few eggs and stacked them on bagels smothered with cream cheese and sprouts. Cougar, Washington was at least two hours away, so we had to hustle to get on the road. By the time we reached the Ape Canyon Trail head, we were over an hour late for our meeting time with our friends Chris and Kelli, who were visiting the northwest on a summer road trip.

Being so dramatically late was a lousy way to start the day. Unfortunately our companions had camped out the night before, and were unreachable by cell, so we had no way to contact them to let them know of our tardiness. Pulling up to the Ape Canyon trail head, we found the note left for us, and quickly mounted up and started out on the trail. It looked like they weren’t too far ahead of us. 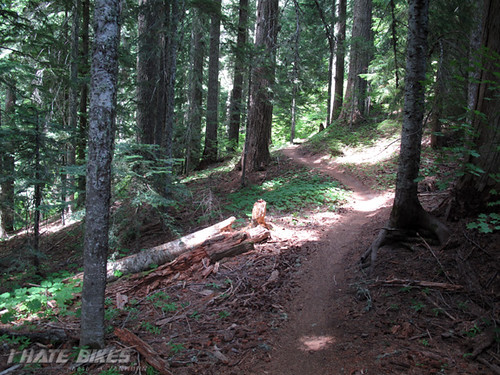 About 5.5 miles in length, the Ape Canyon Trail is a good example of a typical northwest forest single track. A twisty forest path over nice loamy soil with ample amounts of traction, the trail begins with some elevation gain that starts almost immediately. After a few miles of pedaling we settled into our rhythm, and made good time cranking up the trail. By the time Inga and I were finding our groove, we caught up to our riding partners in time for a nice break.

After chatting a bit with our friends, we continued on the journey up. Other than the elevation gain, the trail isn’t that technical, and is considered intermediate or blue square- though I wished I had my Intense Tracer in more of a trail bike configuration. (My current all mountain set up with it’s short stem is a lot of fun coming down, but less than ideal for sustained climbs like this that seem to draw themselves out.) Fortunately, the higher we got, the better the views became, until we reached the tree line and emerged into the blast zone. 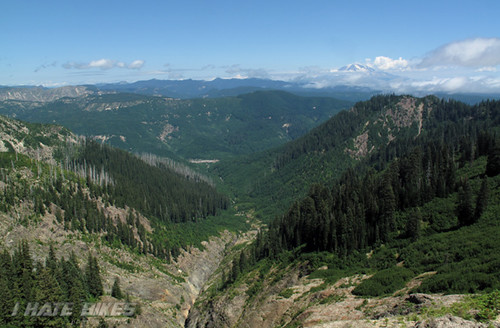 One of many rewarding views at the top of the climb. Photo: JVH

Although it has been 30 years since Mount Saint Helens last erupted, it wasnâ€™t until recent years that the vegetation began to restore itself. The vegetation is slowly starting to return to normal, but area above the tree line still looks like a landscape unlike any other. It has often been compared to a lunar landscape, a comparison I would agree with, and have used myself in the past. This view is really what makes the experience of this ride a must do. Volcanic washes run down the mountain in a radial direction originating at the peak, scars on the environment that create unique obstacles to navigate. 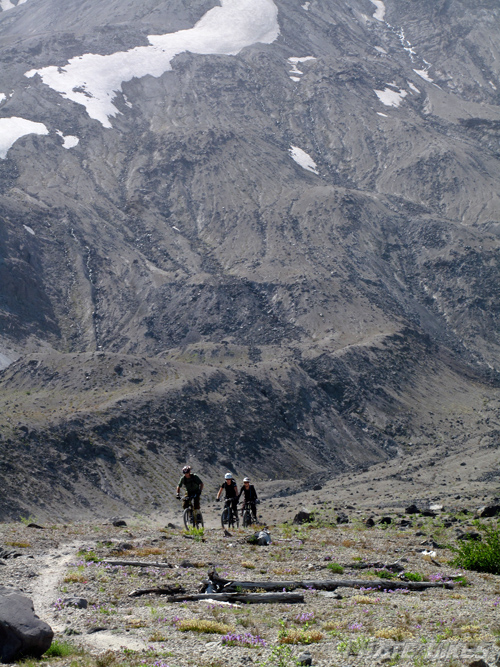 The Plains of Abraham

The trail from here on out changes personality drastically. Unlike the forest single track with its soft pine needle covered tread, the soil is now loose, dry, and dusty.

Making your way across the plains of Abraham, the trail is reminiscent of riding across dry Arizona desert terrain, except the tread is much more loose, and has a gray ashen hue. As we made our way north, along the east slope of St. Helens, we crossed a number of washes that provided a technical challenge with a high consequence of failure. A misplaced tire would result in a uncontrollable slide that would end with an impact on large rocks. Much more difficult than the descent into the washes though, is the climb back out, and we often ended up forced to hike-a-bike short sections. 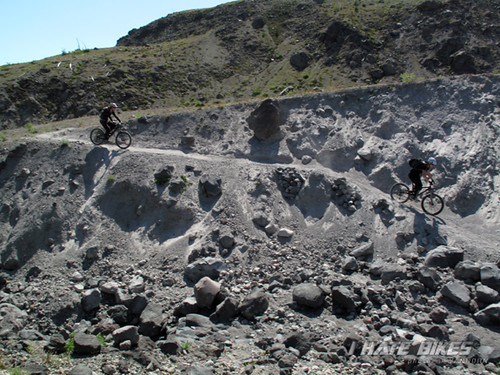 The experience of riding on the plains is accentuated by the large active volcano looming in the background- definitely the best part of the experience. 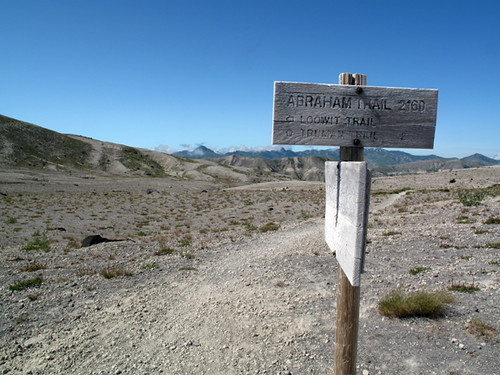 The Plains of Abraham. Photo: JVH

Depending on which route you choose to do, you have a number of options on where to head from here. Once we reached the end of the Abraham Trail, we continued on to the Truman Trail, which is a common route. Many choose to continue on to the Smith Creek Trail in order to do the ride as a huge loop. As this option uses a number of fire roads, we chose to stick to the single track and turned around, doing our ride as an out and back. 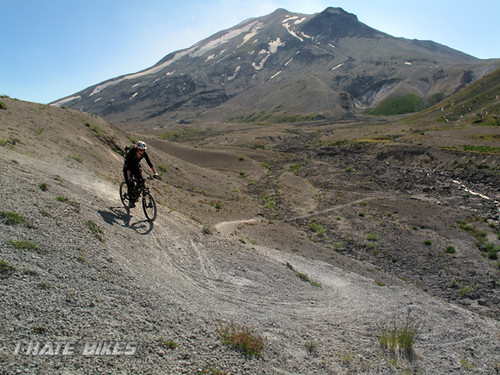 Inga descends into another wash on the Truman Trail, while St. Helens looms in the background. Photo: JVH

The descent down Ape Canyon goes by much too quickly, as the elevation so slowly earned on the way up, flies by in a matter of minutes.

While the trail itself isn’t extraordinary in regards to its flow or design, it is hard to beat the incredible views and the experience of riding in the shadow of a volcano. If you are in the area, definitely try to make this ride. 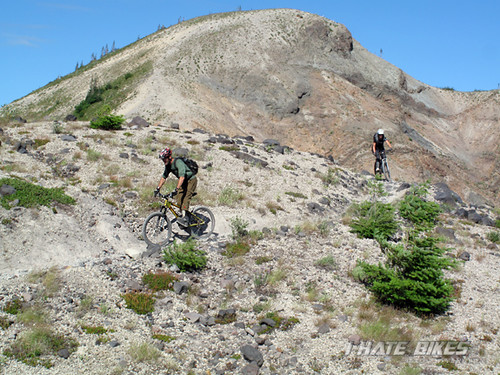 More info on riding in the Gifford Pinchot National Forest