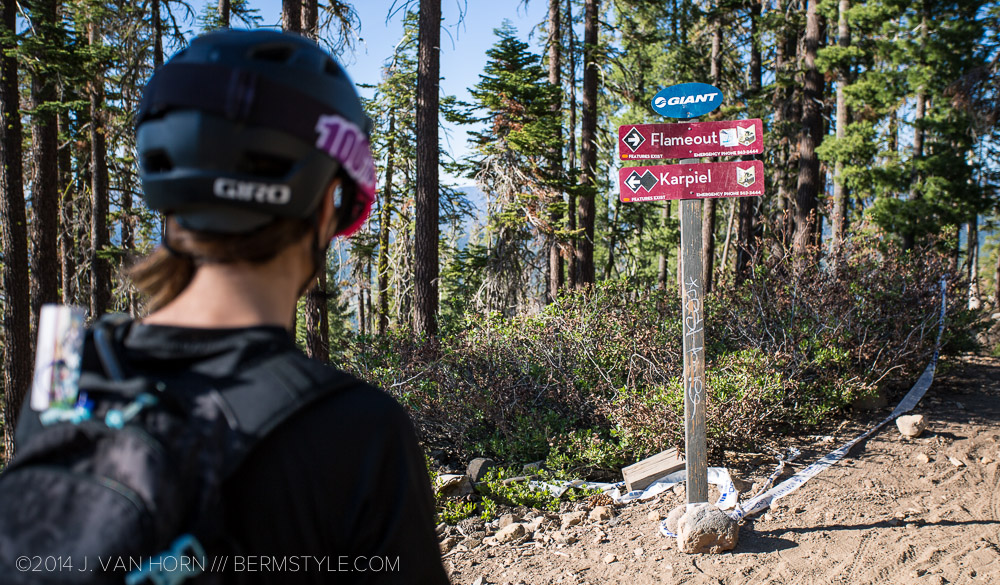 Can you have fun riding a regular mountain bike at a bike park, or more specifically, the Northstar Bike Park? With a reputation for big rocks, loose soil and clouds of dust, Northstar has often been described as Gnarstar, for good reasons.

We’ve always enjoyed our trips to the “local” bike park. As residents of the Bay Area, it’s one of the only legitimate destinations to ride a full blown DH rig within a day’s drive. Although there are a few spots close by, there isn’t much to shuttle, and riding here is where ownership of a dedicated long travel, sh*t eating monster of a bicycle becomes justifiable.

However, reality is a lot different from the ads and videos we see in the mags and online. The typical Bay Area mountain biker doesn’t own a downhill bike, or even have interest in getting one. Many less are looking to test their limits on treacherous double black diamond runs littered with gigantic boulders and drops where the smallest mistake ends in a painful sprawl on boulders. 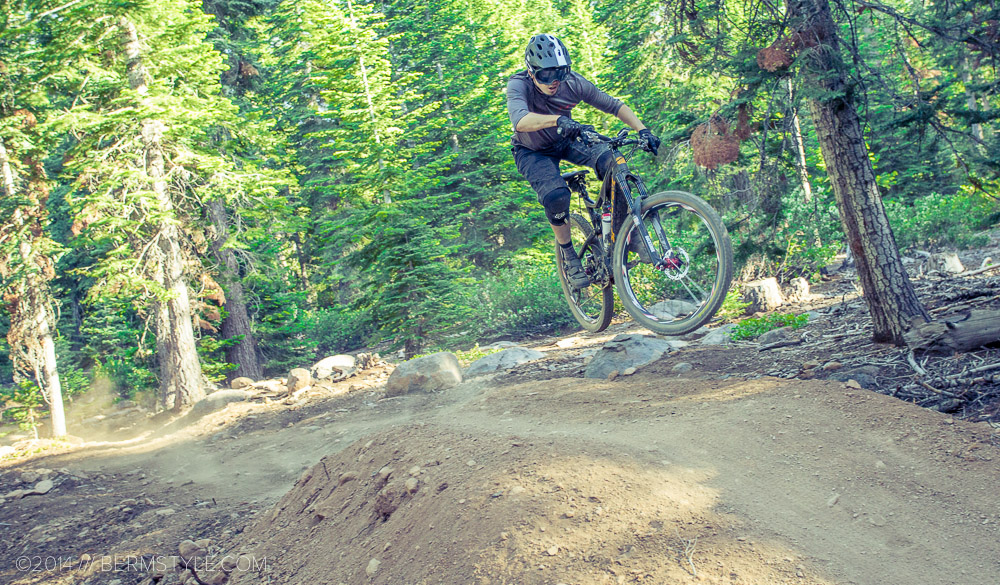 We managed to find stuff that was super fun on our “regular” trail machines.

I think we can all agree though, gravity fed runs are fun. The emerging popularity of flow trails all over is a testament to that. Flow trails are basically bike park runs in the context of a trail ride. What I don’t understand though, is why Northstar doesn’t market to the demographic of, well, almost everyone. Is it because they don’t have the trails, or suitable terrain? (because they do, and could)

We’re often asked by our non-DH trail riding friends what Northstar is like, so this weekend we decided to dedicate our last run of the day to rediscovering what it’s like to ride a regular trail bike at the bike park. 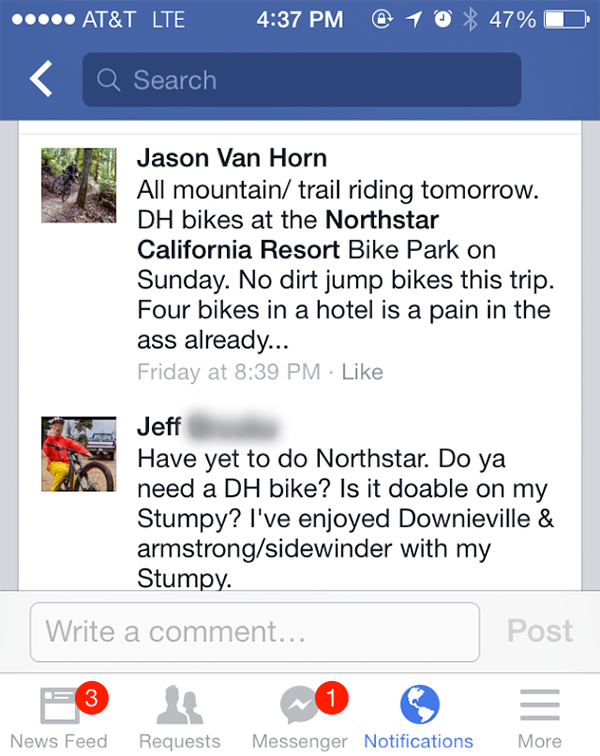 Completely changing up our riding experience, after an afternoon of flowing down the Livewire and Gypsy jump lines, we retreated to the car. After chowing a coffee and a Clif Bar, we hung up the DH machines and 5.10 shoes and exchanged them for our daily go-to rides and SPD pedals.

I’ve always felt that bike parks should work a lot harder at providing an experience more inline with typical mountain bikers, as opposed to just aiming at the hardcore DH crowd. After all, the more people that come to your resort, the more likely your business plan is sustainable.

Based on feedback from friends on Facebook, a lot of our social network just weren’t that interested in our adventures at the bike park. Unlike our recent trip reports on new flow trails, the bike park experience wasn’t something they could relate to. It’s hard to blame them. Since moving back to the Bay, I didn’t have a DH rig for a season or two. And when I built one back up, it was so I’d have a rig for a massive road trip to Whistler. 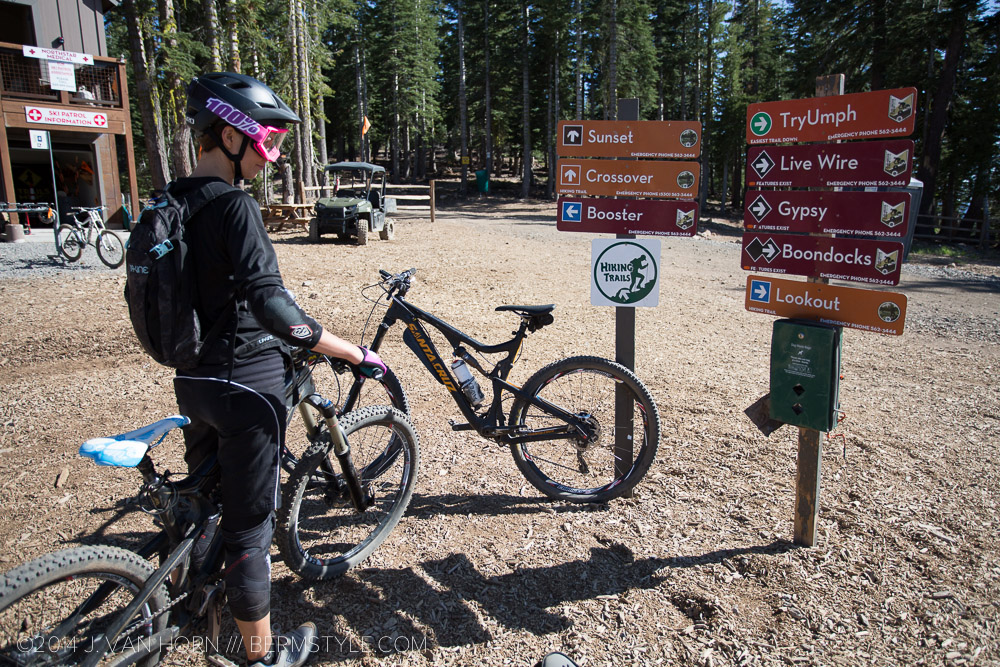 Looking around the lift lines, although they’re heavily populated by long travel steeds, if you look closely, there are more than a few folks riding on all mountain rigs. Before Inga had her hand me down DH rig, she regularly rode the park on a 6″ travel all mountain bike we set up for her. But we never made an effort to seek out “regular mountain biking” at the park.

Regular visitors to the park will recommend you rent a DH bike when coming to visit, us included. If you’re going to ride burly sh*t, it makes sense to leave the high zoot carbon machine at home and spare it the abuse. (and rim dings and scratches) So when we dropped off the black diamond machines, grabbed the camera pack and changed out our gear, we went looking for trails we normally wouldn’t ride on the big bikes.

Several lift operators, when asked for a recommendation of trails to ride on a trail bike, couldn’t relate, as they only ride DH bikes and dirt jumpers. (they only ride park)  They said they usually sent folks down the fire roads. We weren’t interested in riding roads, so we looked up the course for the enduro race held just a week prior to our visit. 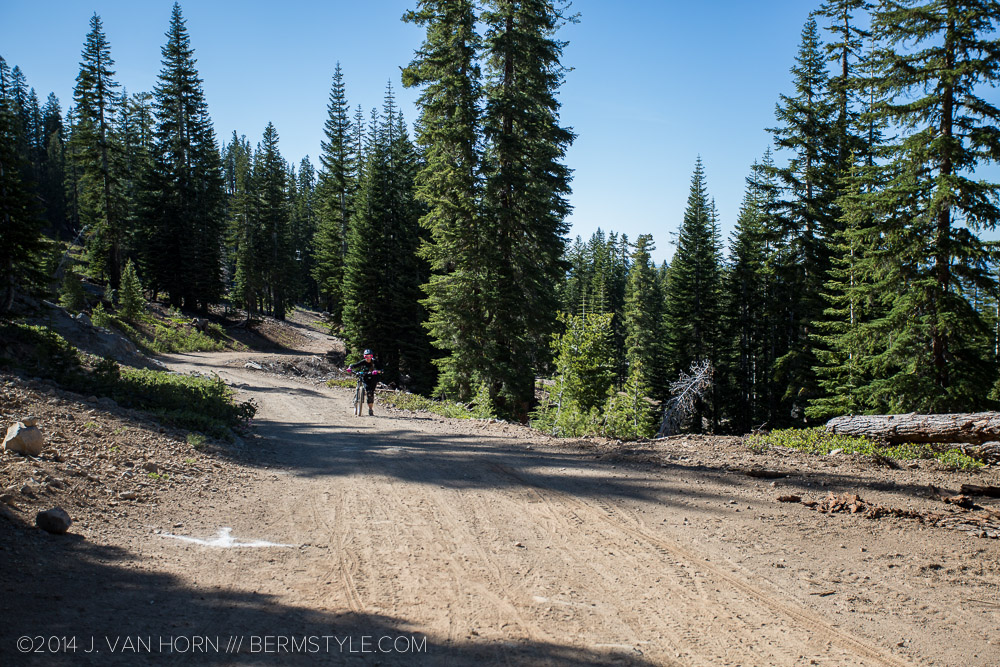 Are we there yet?

The Tahoe Zephyr Express was the only lift open, so we began by heading to the left and began the traverse via Crossover, a green rated fire road. 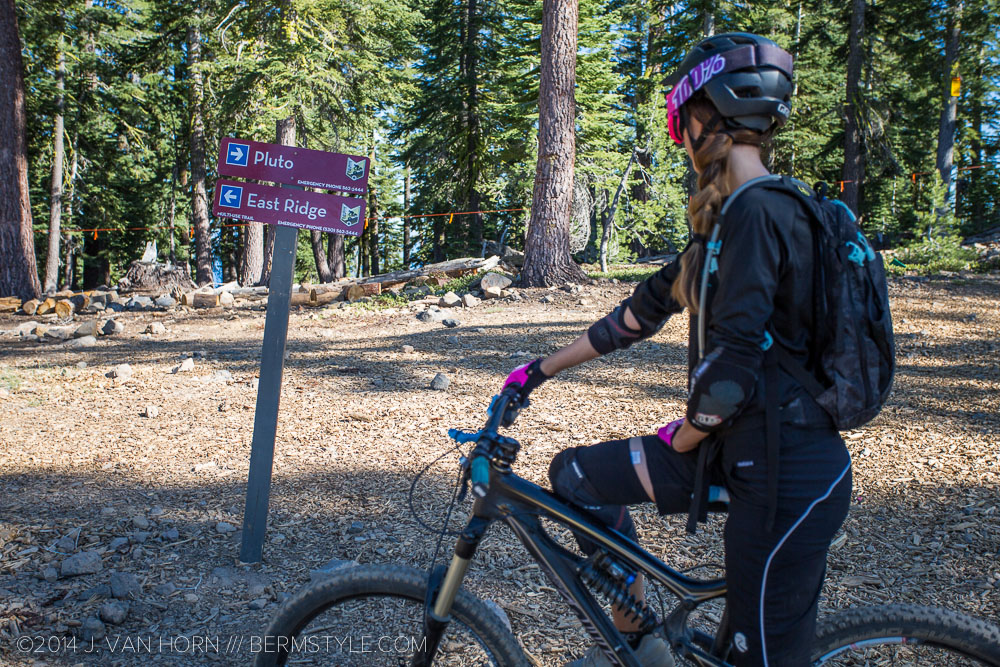 After tiring ourselves out doing run after run on the DH bikes, the fire road climb pretty much sucked. Looking at the terrain, we kept hoping to see a contour single track trail that would let us continue the traverse. Fortunately it was a relatively short climb.

We were pleased when we finally started onto the single track Tahoe Trail. 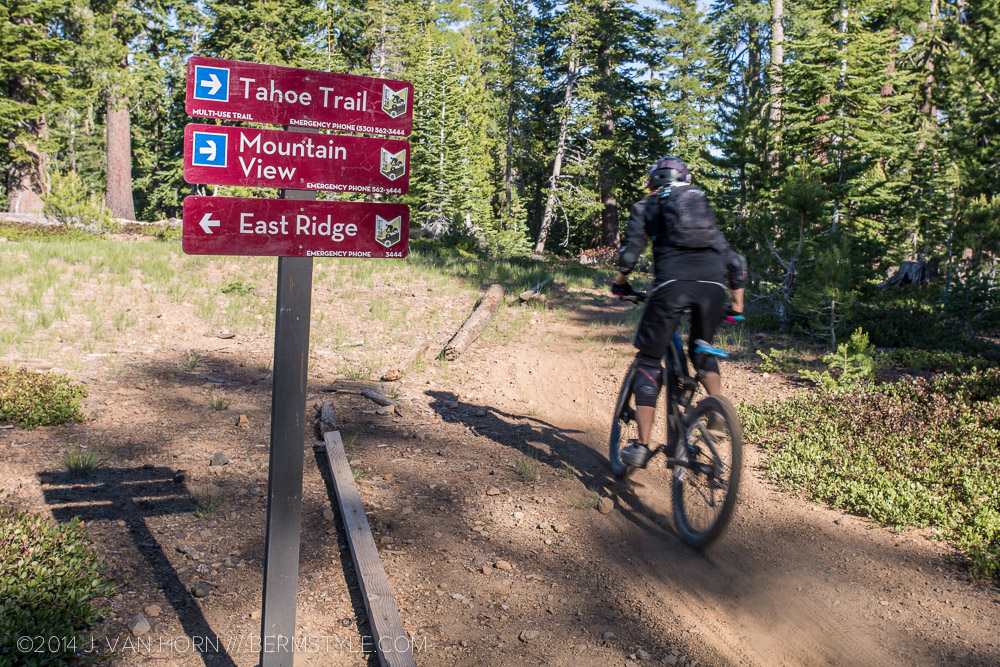 The start of the Tahoe Trail

Once we got the fire road climb out the way, things were looking up. It was fun to be riding some new trails, especially after a day of high speed, hand-numbing runs. Once we got to the trail head of the Tahoe Trail, we forgot we were already worn out from a day of riding, and experienced a second wind. 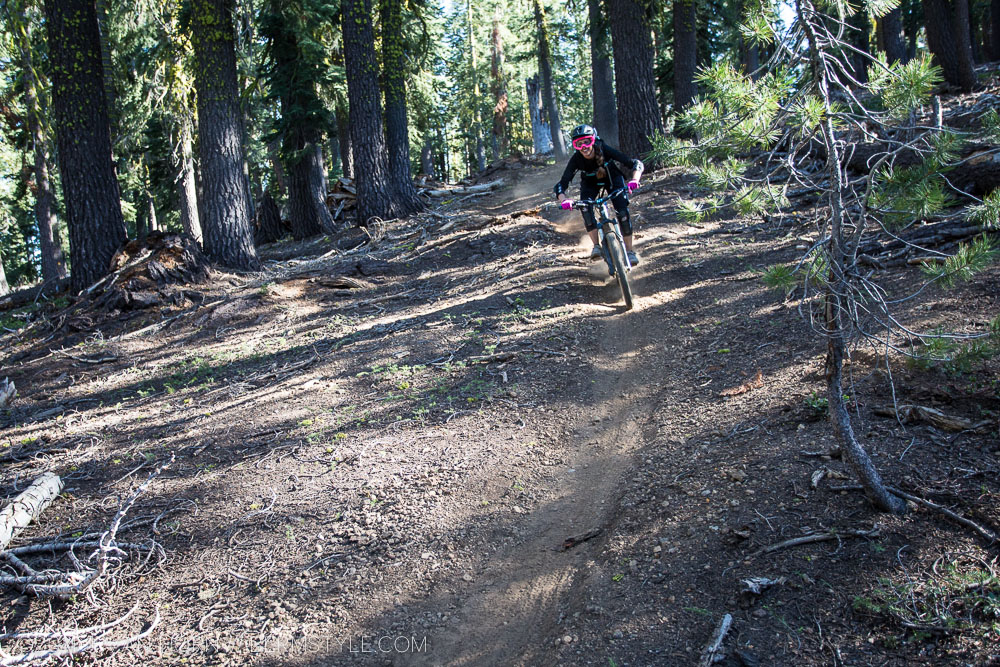 So fun to be riding a trail that isn’t already blown out! 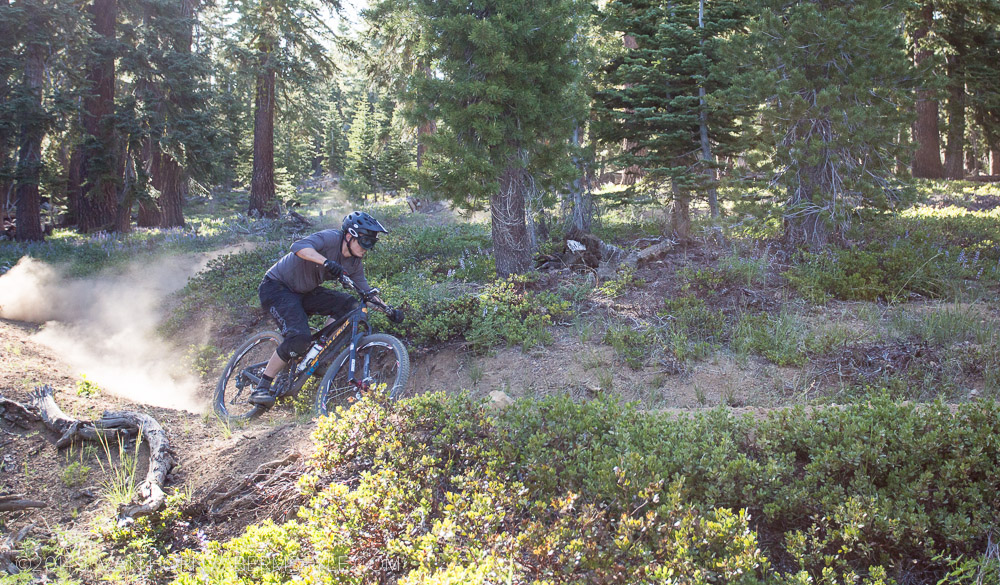 A sweeping turn on the Tahoe Trail.

The Tahoe Trail dumps you off at the top of the Vista Express, which will be opening in the next week or two. Since it isn’t open yet, the trails on this side are still in good shape.

From here we dropped into Sinuous, a black diamond level flow trail. 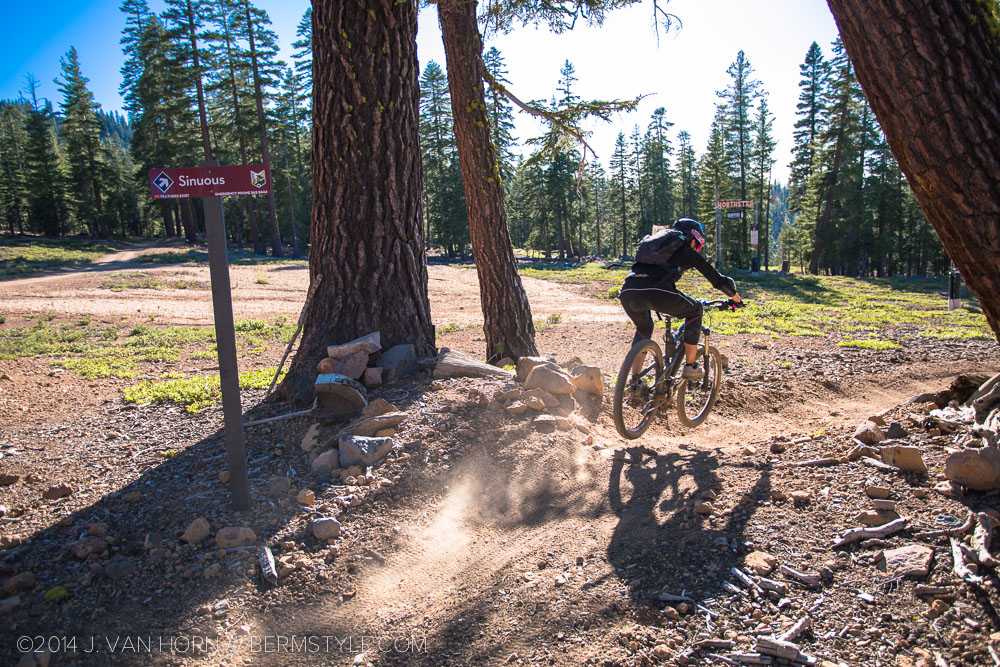 The start of Sinuous.

Sinuous is basically a slalom like flow track littered with turns and a some table top jumps. Although it is definitely a black diamond level trail once the Vista Express opens and the hordes descend en masse, and the turns become loose and sketchy.

The early season is the time to ride it, as the trail conditions were still good for bikes with less travel. 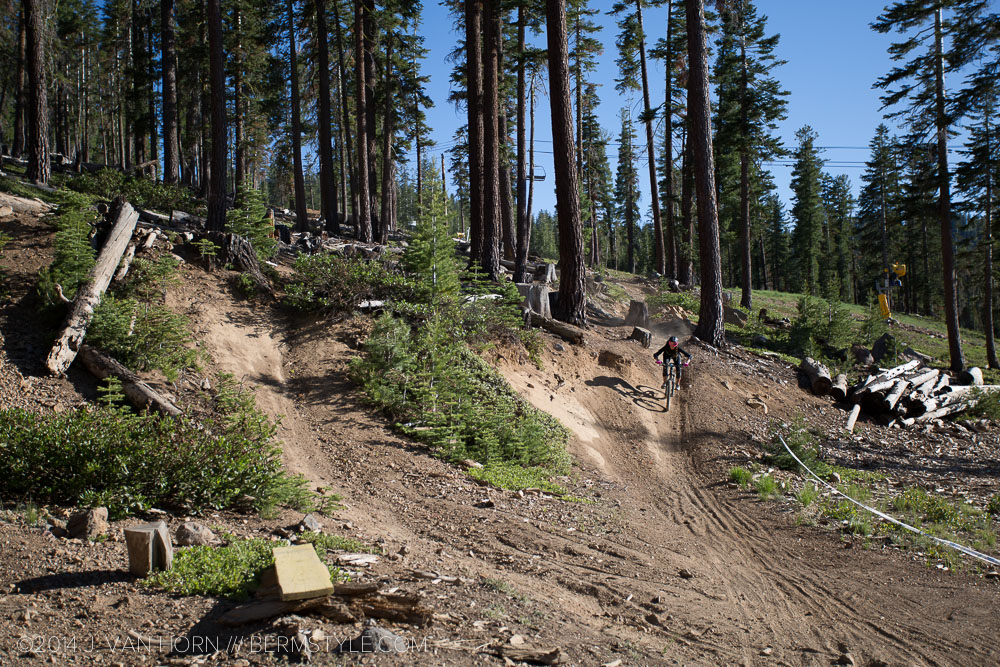 The end of Sinuous

We then started on the Flameout trail, taking care to avoid the double black diamond routes. Trails like Karpiel and Sticks & Stones are expert only, which means full blown DH gear. Flameout on the other hand was still in decent shape, and continued the fun, with jumps and turns before you start encountering some loose, rock filled sections. 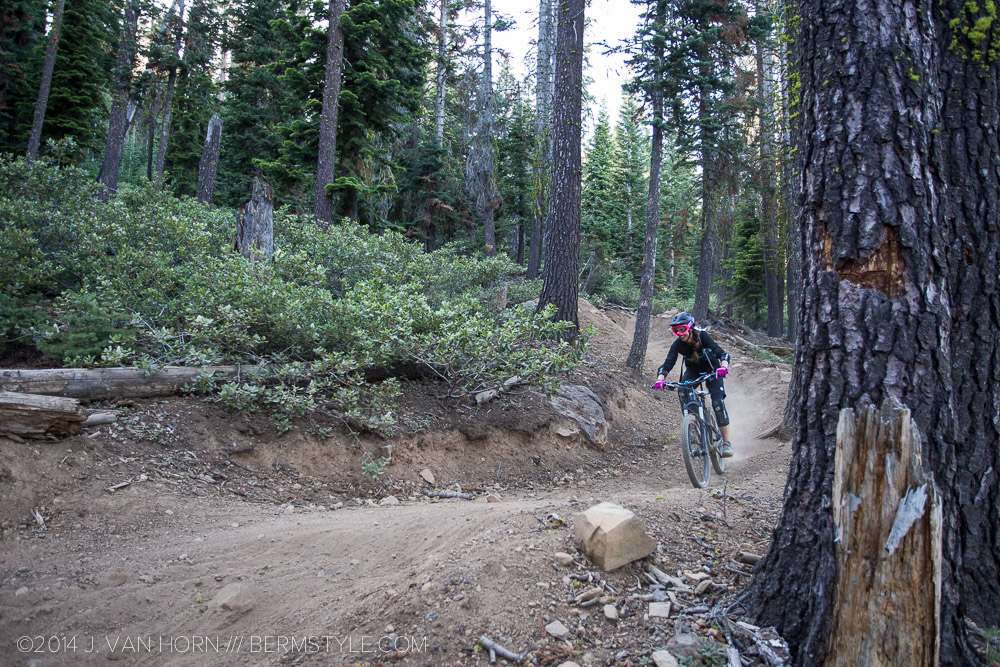 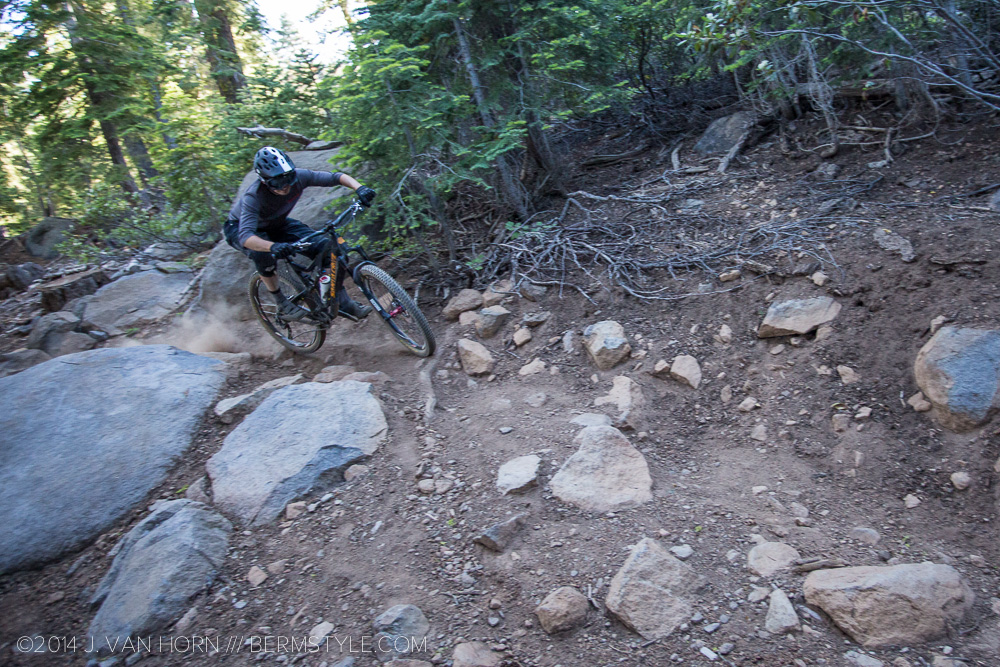 As you descend Flameout it becomes a bit more technical. If you’ve ridden Mr. Toads Wild Ride and enjoyed the rocky challenge, you’d enjoy it, as it’s similar, but includes table top jumps and some fun turns. 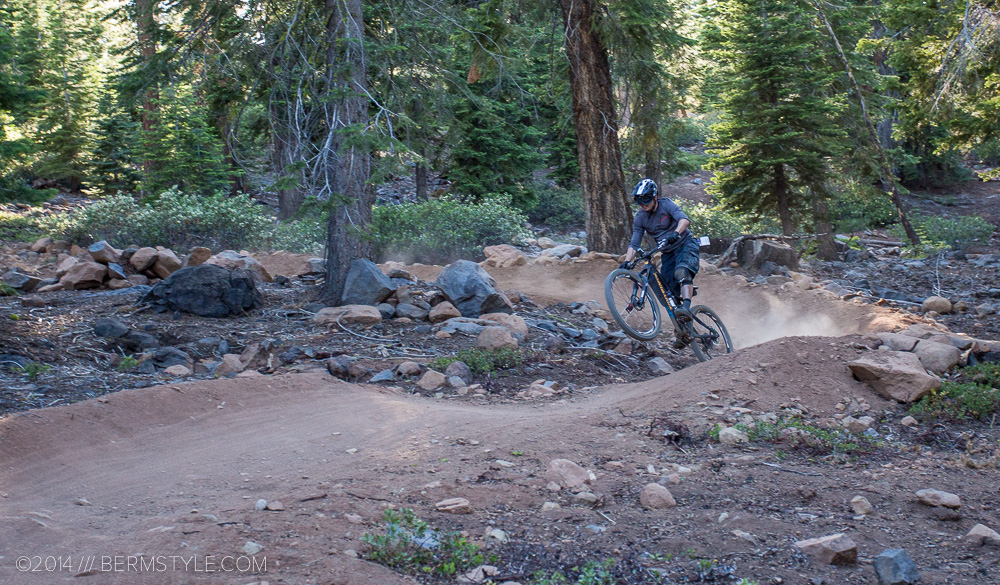 Hella S-turns yo. On Flameout

At the end of Flameout we headed down the intermediate level Deer Path trail. We weren’t even sure where we were at this point, but we definitely enjoyed the route, as we typically come down Mineshaft. In fact, all the trails accessed from the Big Springs Gondola are fun on trail bikes. From the top of the Zephyr Express to the lodge we covered about 7 miles according to my Garmin. And we had a blast doing it. 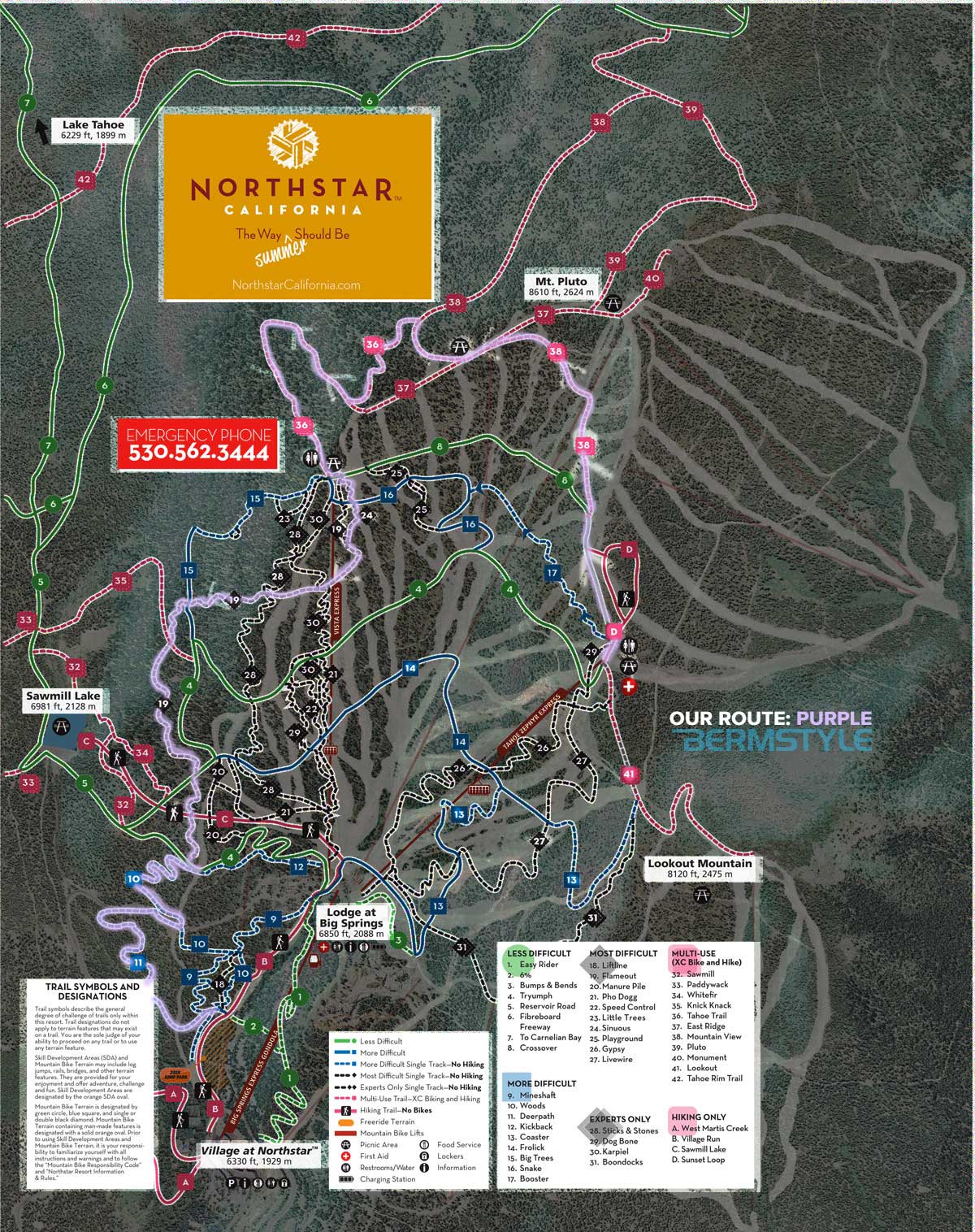 If I was at the bike park more often, I’d want to change up my machine for something much more fun to pedal, as opposed to my over built rig of the moment. Something like the Liteville 601 equipped with a dual crown fork and dropper post would be awesome. However, I’ll probably just dial in the Nomad (which Inga rode for this post)  for this stuff. Our route wasn’t that far off from the recent enduro course. It was a fun ride- I’m tempted to come back to race the July 20th date on it.

If you were to explore the park on your trail rig, avoid the green less difficult runs here, as they’re generally just dirt runs. The blue square intermediate ones are a good place to start, but they generally lack the fun features of the black diamonds. And avoid the double black diamonds, they’re called the most difficult for a reason and the consequences for mistakes are high.

Best times to ride the park

The best time to trail ride at Northstar is before the trails get hit too hard. For the first few weeks of the season, they only open one lift, so those willing to pedal, (that’s you, on your trail bike) get more than half of the trails to themselves as everyone else does repeat runs of Gypsy, Livewire and Boondocks. (guilty)

Knee pads— real ones, are recommended. Although we’re fans of the light weight G-form pads, those are light on protection. You’re going to want some legitimate knee armor here.

A full face helmet isn’t a bad idea. I went with my Bell Super, which has more coverage than a typical XC helmet and is designed to pair extremely well with goggles, and is very camera friendly. (unlike my full face)

Due to the dust, we’d strongly recommend a pair of goggles. It can get dusty fast, and a bit of extra eye protection is strongly encouraged. If you don’t already own a pair, 100% goggles start at $30 in the resort bike shop. They come in Pink too, and that was just too much for Inga to resist.

An all mountain bike with six inches of travel equipped with a short stem and wide bar is recommended as well. Short travel bikes and XC hardtails, not so much unless you like taking your time. You’ll also want to be running your biggest, high volume tires, definitely stick them on.