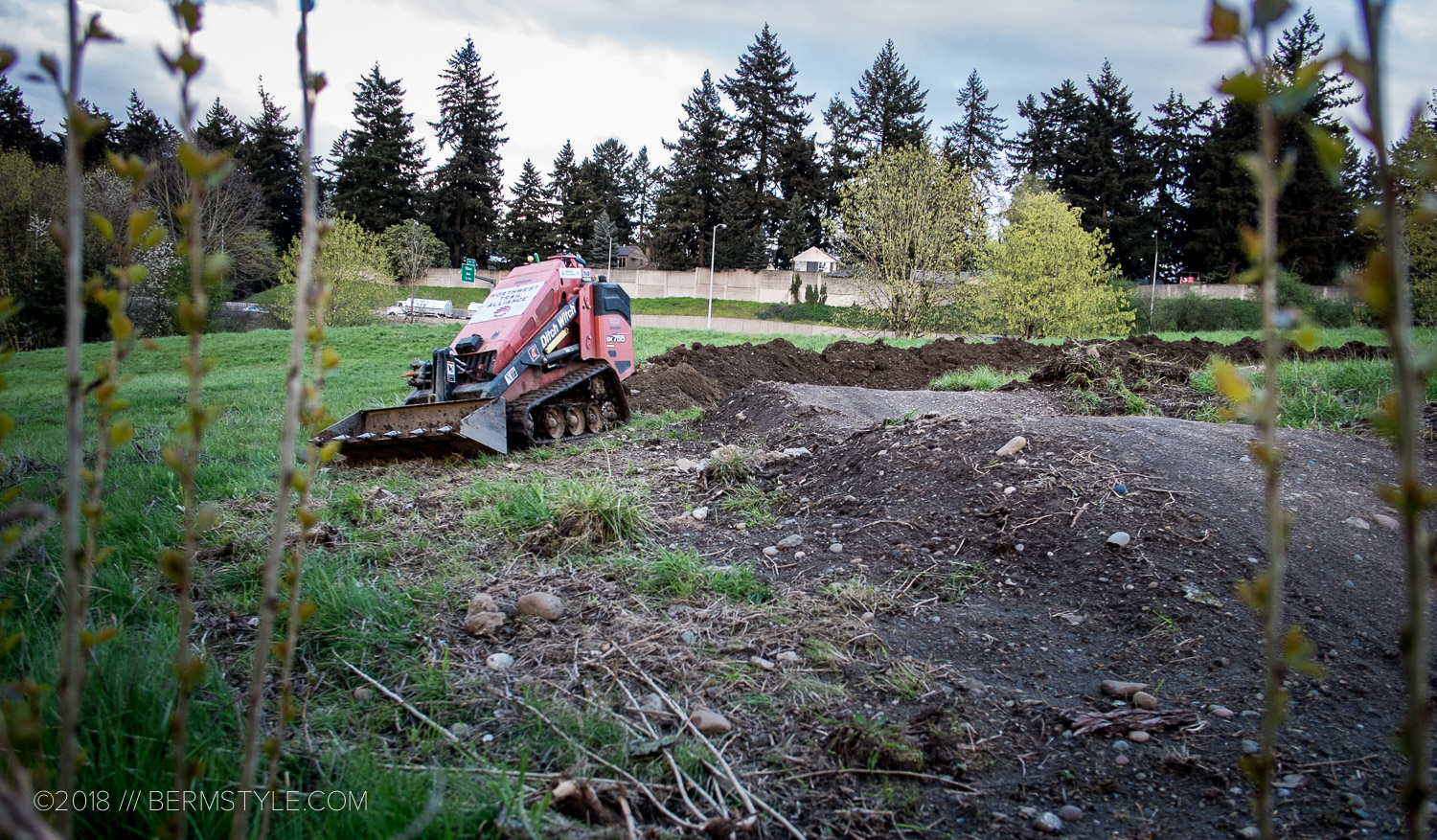 Iterative improvements: once we built up these rollers, we realized the berm wasn’t going to do it as it was. Rebuild time…

The Gateway Green Bike Park and our efforts with the DirtLab Evolution project received a nice shout out in the bike issue of the Willamette Week (a local paper) recently thanks to an op-ed contribution penned by local ripper and pro level rider Spencer Burback. If you’re a regular at the park, you may recognize Spencer as the rider with some of the best lines in the park.

The article was a nice bit of validation of the efforts we’ve put into the Gateway Green trails and riding experience this year. Since receiving the keys to the tool container and a green light to begin implementing improvements on behalf of the Northwest Trail Alliance and Friends of Gateway Green, I’ve organized and logged 13 work sessions to date. Not counting the hours I’ve spent wandering the park on foot placing flags and planning trail projects, I’ve personally logged 54 hours of volunteer trail work in the last four months. 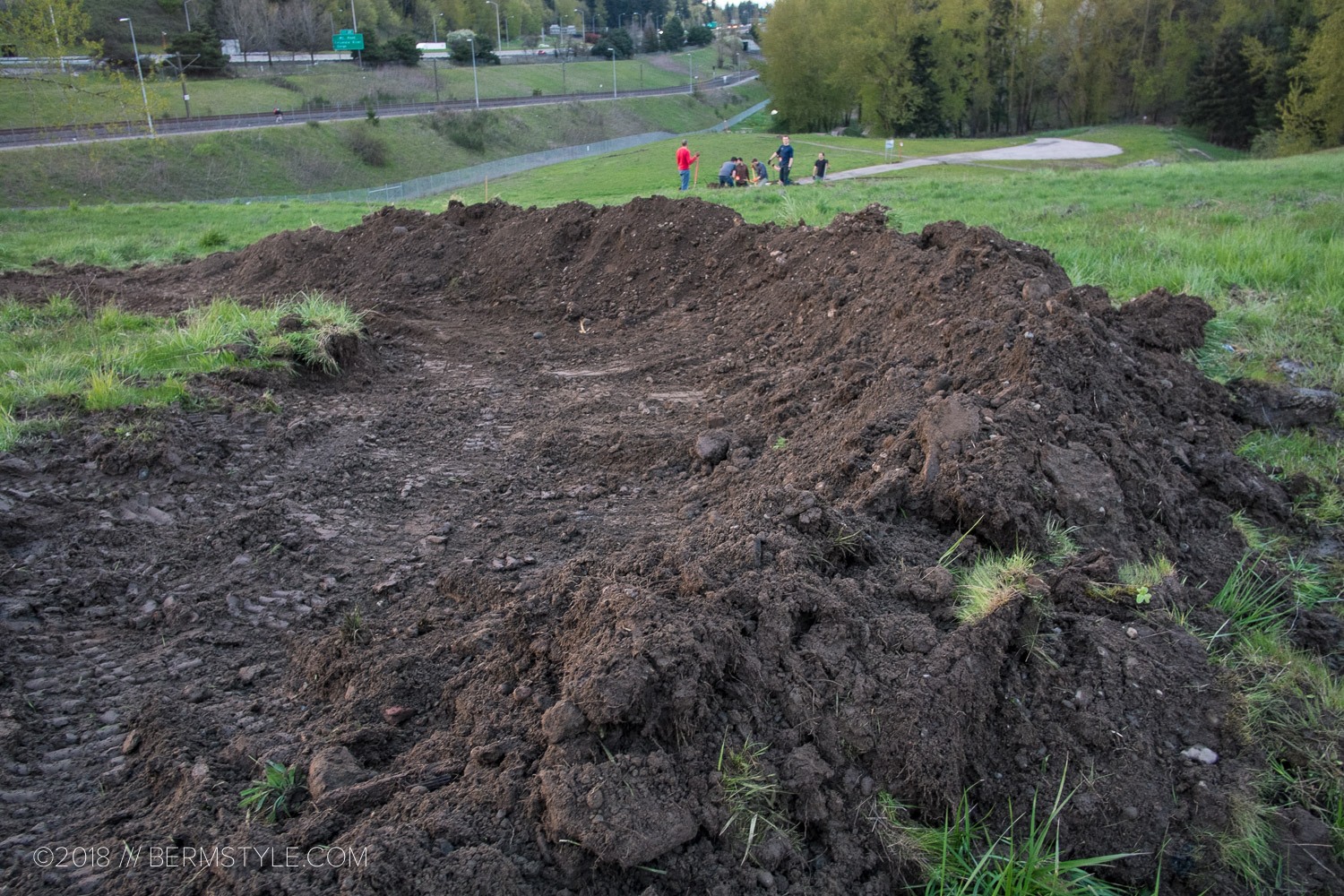 During this time we’ve had anywhere from 2-17 riders come out to aid in making the bike park a place we want to ride our bikes for a total of 369 hours of skilled labor donated to the cause, and growing.

The initial work in January started slow and modestly. The first day I went out and tested the keys to the container. Since I was out, I started with a test dig and began by adding dirt rollers over a log by hand. I managed to create two small rollers on the Cliff Line in the span of five hours. 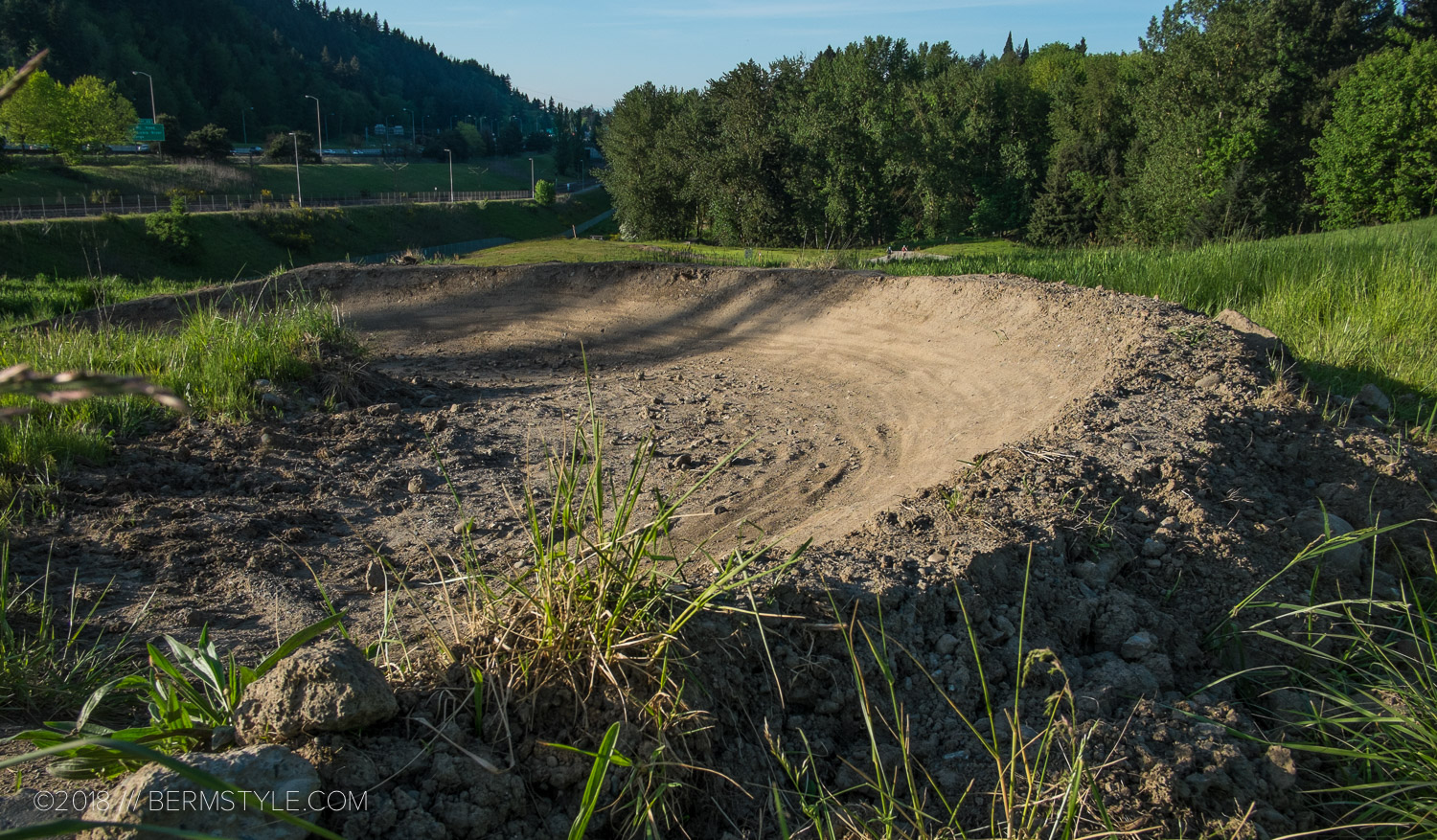 Although I had a vision I was able to pitch and get approved for improving the riding experience, it was time to start recruiting help. On the next Saturday 3 riders joined me and we continued working on the Cliff Line, building 3 more rollers. The work was still going slow, and we also had the challenge of not being able to mine soil from areas around the trail to build rollers due to its location in what parks called the “e-zone.” 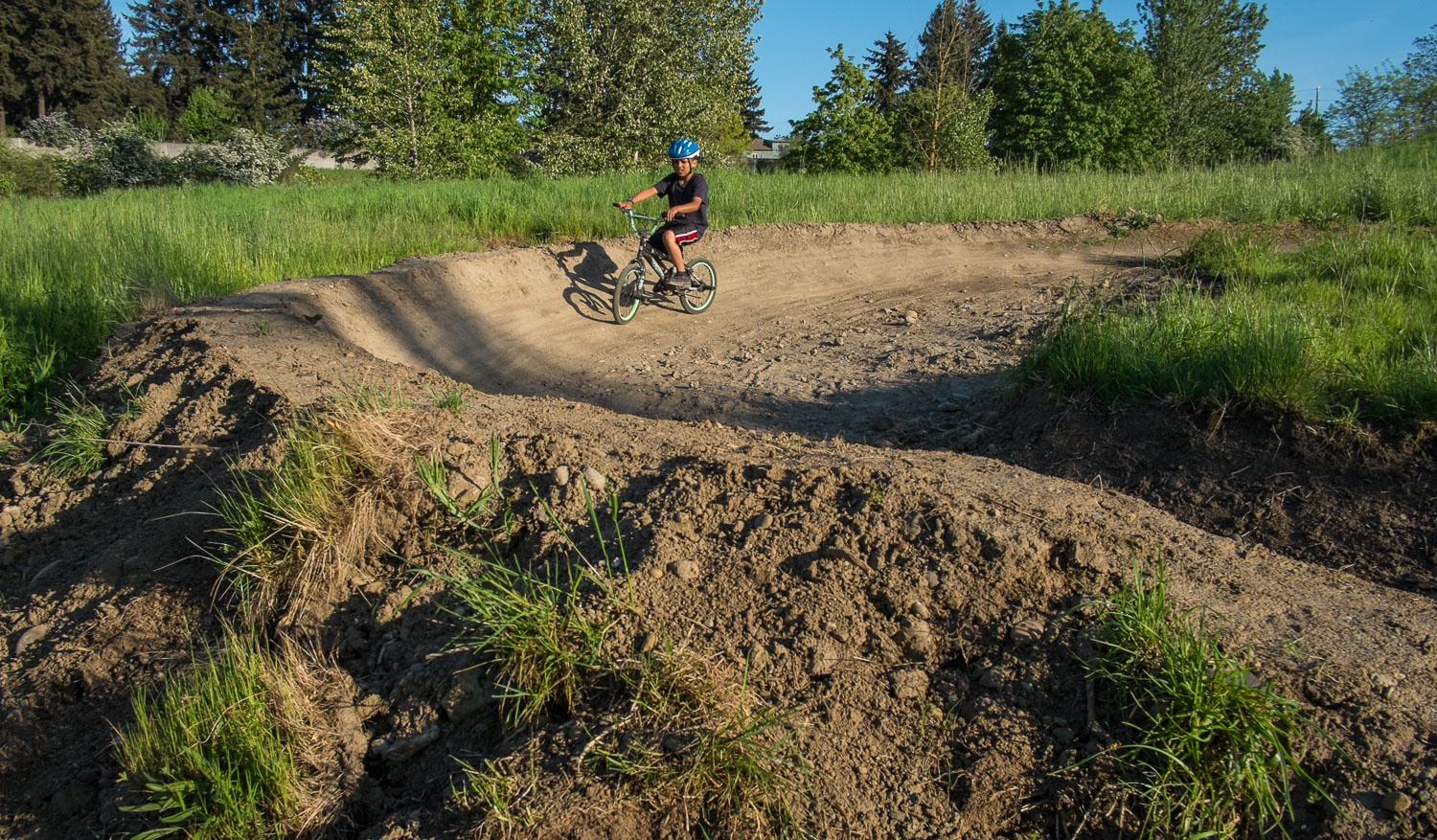 A young local rider on our refreshed berm.

I had to come up with an alternative way to source soil. Fortunately it was simply a matter of lowering the tread in some areas to raise it in others. In the process we’d create drainages in the form of “rolling grade dips”. That meant digging down to source the soil we were going to work with. We then utilized the displaced soil to shape and construct our features. (our initial efforts are documented here) 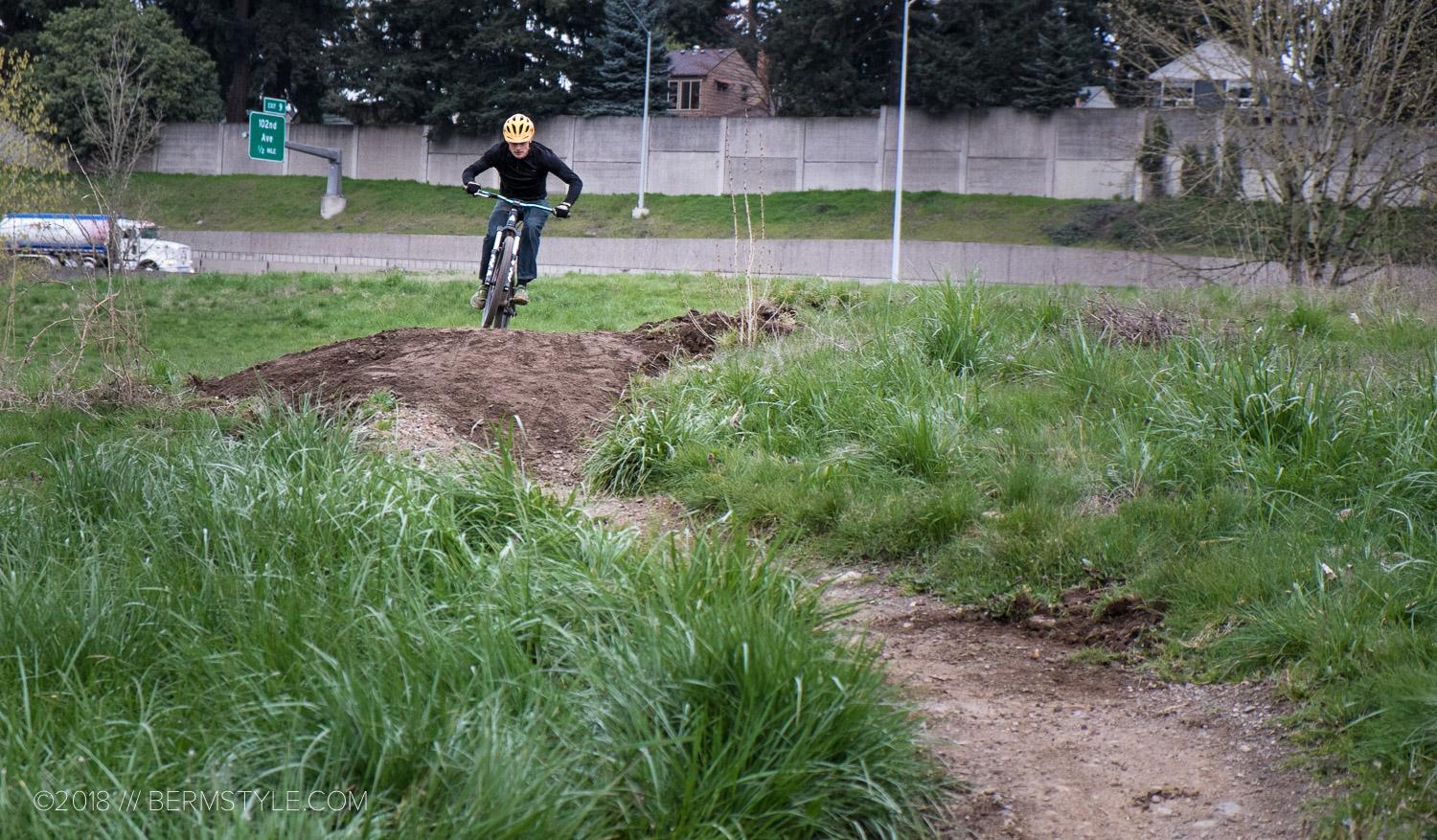 Calvin Collander is one of our regular builders and test riders. Here, he’s checking the flow of new and improved rollers.

Doing all the work work by hand was laborious and painstakingly slow. Thankfully the ditch witch had been repaired at this point, so it was time to see what we could accomplish that we had proper equipment in play. Although getting the machine to the build area in the E-zone was a challenge, it worked extremely well, once I figured out the best strategy for removing and relocating soil.

I had been having nightmares about the trail disintegrating underneath me and cartwheeling down the side of the hill side, but it worked out, and we were able to move significantly more material.

That is, until a worn out track came completely off while I was trying to back out. Talk about an “oh shit” moment. 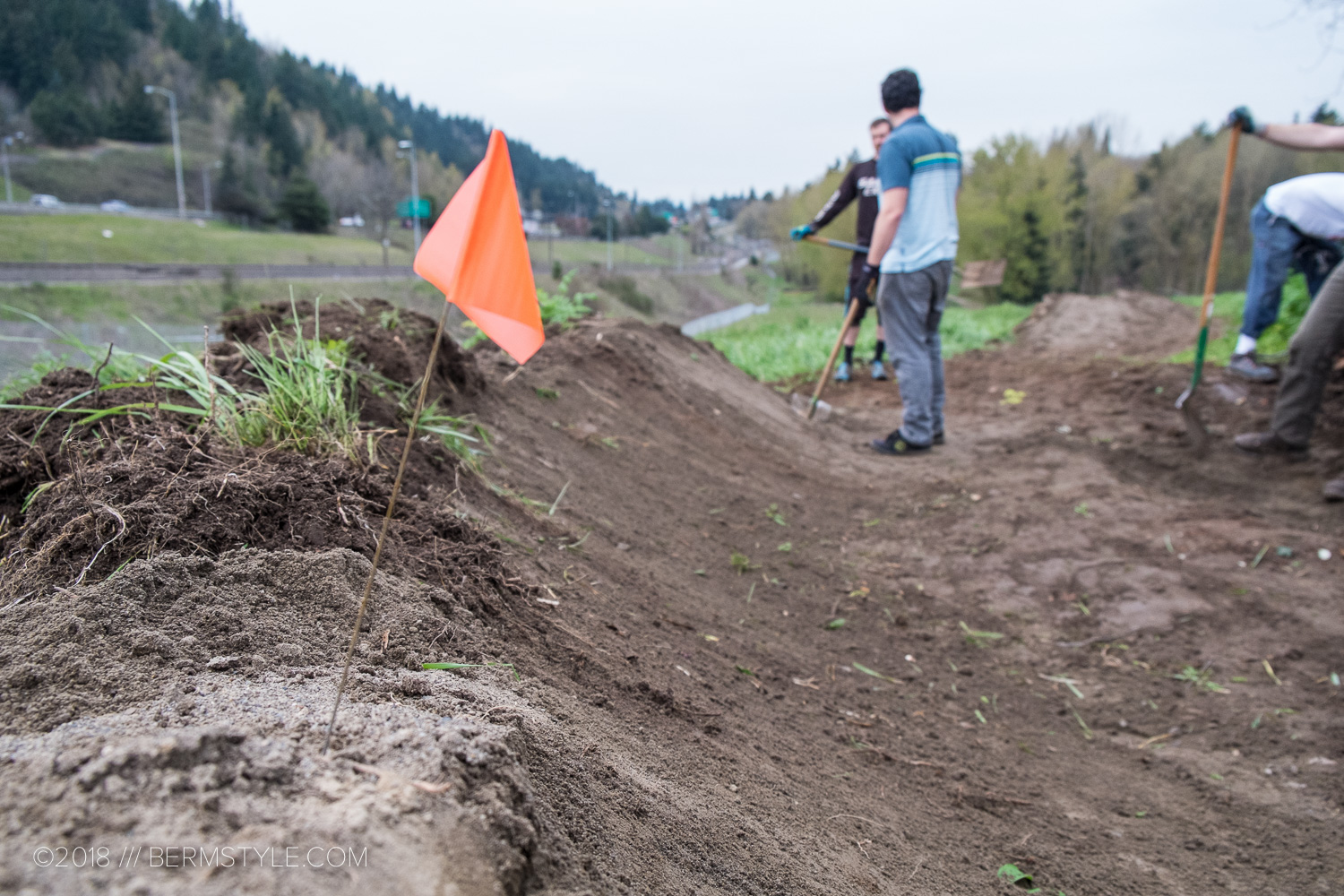 Every week we come back to this berm.. its getting there, but it’ll be built up even more soon.

Fellow LST member (local stewardship team) Chris Rotivik was instrumental in coaxing the track back on with the Adam’s help, and managed to walk the machine back to the container without losing the track again. He then took care of scheduling the repair and replacement of the track.

Although I had areas on the Cliff Line I still wanted to address, I was concerned about fixating on a small section of the park. It’s a small area, and in order to have the biggest impact on the overall riding experience, it would be important to improve the riding experience throughout the entire property.

So on the next week I decided it was time we finally tackle the Toe Line. The small rollers weren’t that fun, and it was a chore to ride them. They served as a connector trail more than anything, but could be so much more fun. 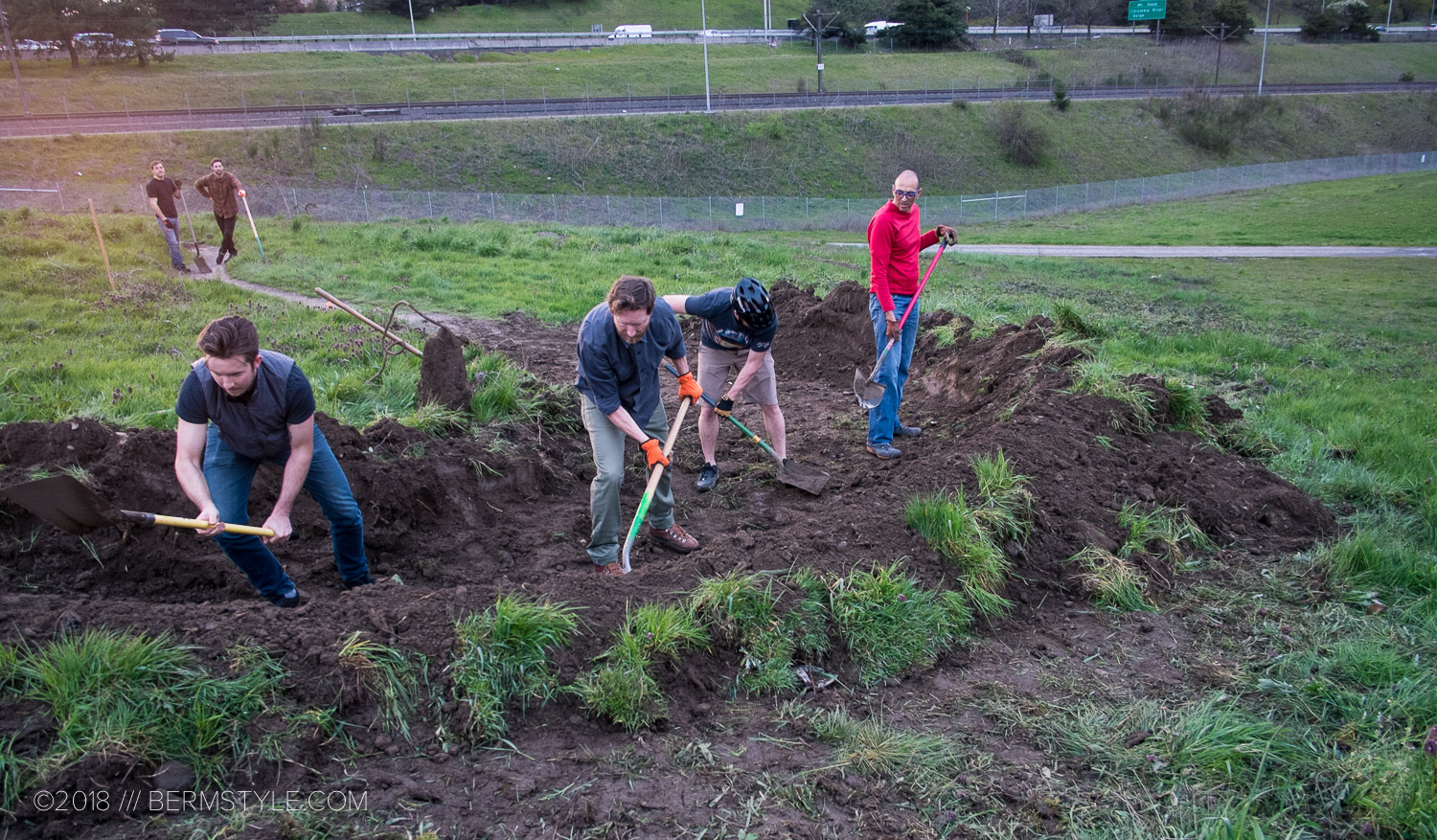 Dialing in the new berm

Unsure of the scope of the Toe Line work, Chris and I came out to make a plan. At this point I’d only logged minimal hours of machine time, but I was getting faster, so I took a crack at the Toe Line. Executing the work myself was way faster than directing an operator, and I figured I’d start by changing the spacing of the rollers and remove a few periodically to make the other ones work better. The idea was to emulate a rhythm section as seen on NBL BMX tracks. The pump track concept was based on BMX, and going back to the root, we wanted to mix up the experience a bit — why not have the entire line link to the jumps at the Skills Park? Most of the riders visiting the park spent the majority of their time in this small area, so extending it would result in placing that experience into a trail context.

If we did it right, many of the rollers would the first double jumps they would attempt. It also had to be kid friendly, but anyone that spends a day riding BMX tracks knows that NBL tracks are designed to be ridden and enjoyed by riders from the age of 3 to 69. 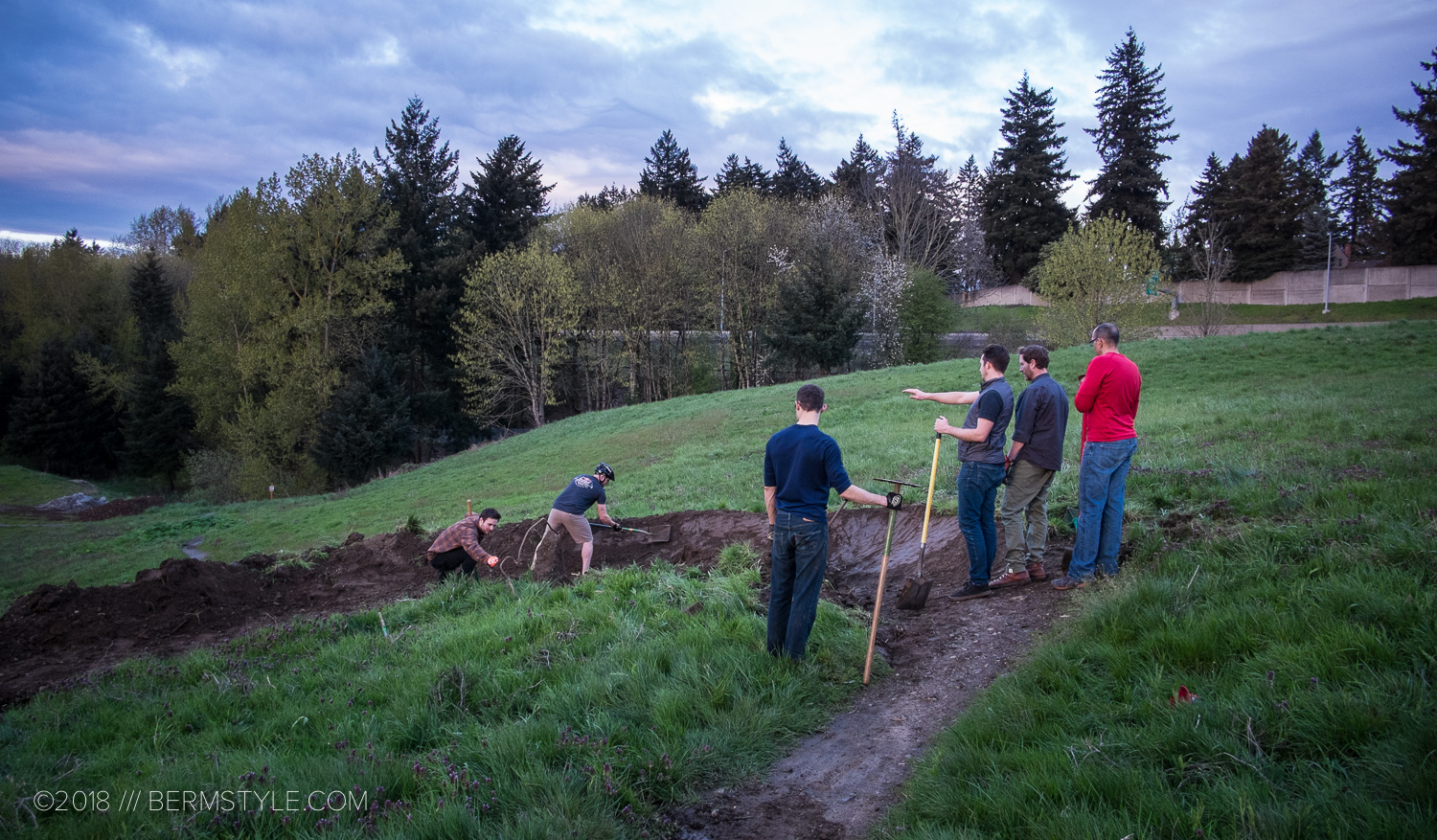 This was a flat turn when we started.

That first day, the two of us put in 5 hours of work. I roughed out the start of the revamped line, respacing a number of rollers. We left the trail unfinished that day, though it was technically ridable. It was time to rally the call for assistance, and for the next two weeks we revamped the entire line.

The result: a kid friendly line that everyone can ride and pump through. Ironically, we initially had negative feed back coming from riders that complain they lack the skill to jump through the entire section. Not having a plate compactor, we were unable to properly pack and tamp the soil, but myself and several of our test riders were able to ride and link (jump) all the rollers with pedaling. Similar to a BMX track, as intended by design. 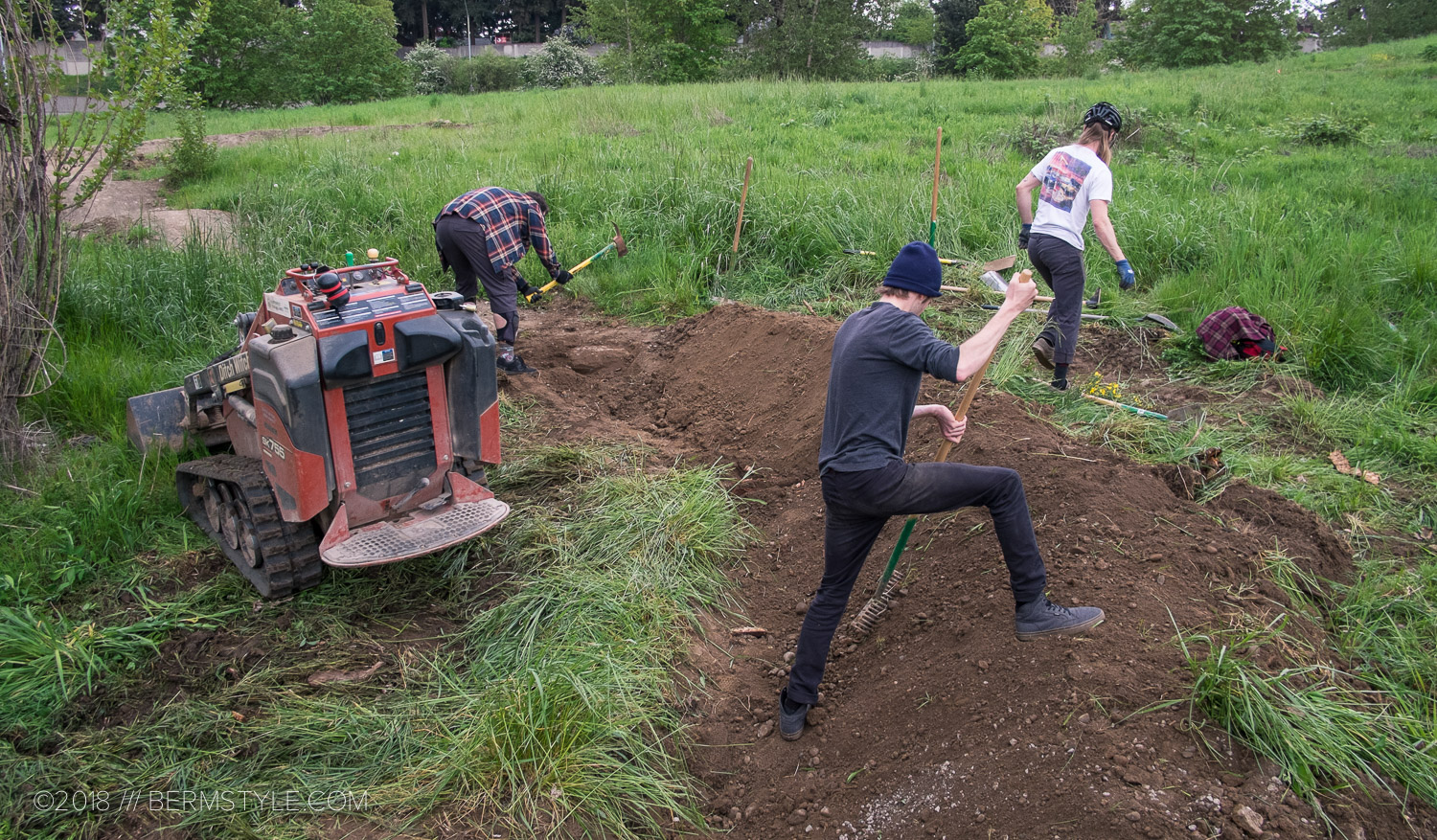 Every time we reworked a section, the section below it would need improvement.

It took some time but the tread surface was breaking in. I’ve been able to ride the entire line and hit everything with three pedal strokes or less on both my dirt jump bike and 6″ travel trail bike with 29″ wheels. I imagine others are cleaning the entire section with no pedaling already. You have to be skilled with pumping and know how to flow jumps in order to ride it cleanly, and the challenge should help make local riders progress significantly. 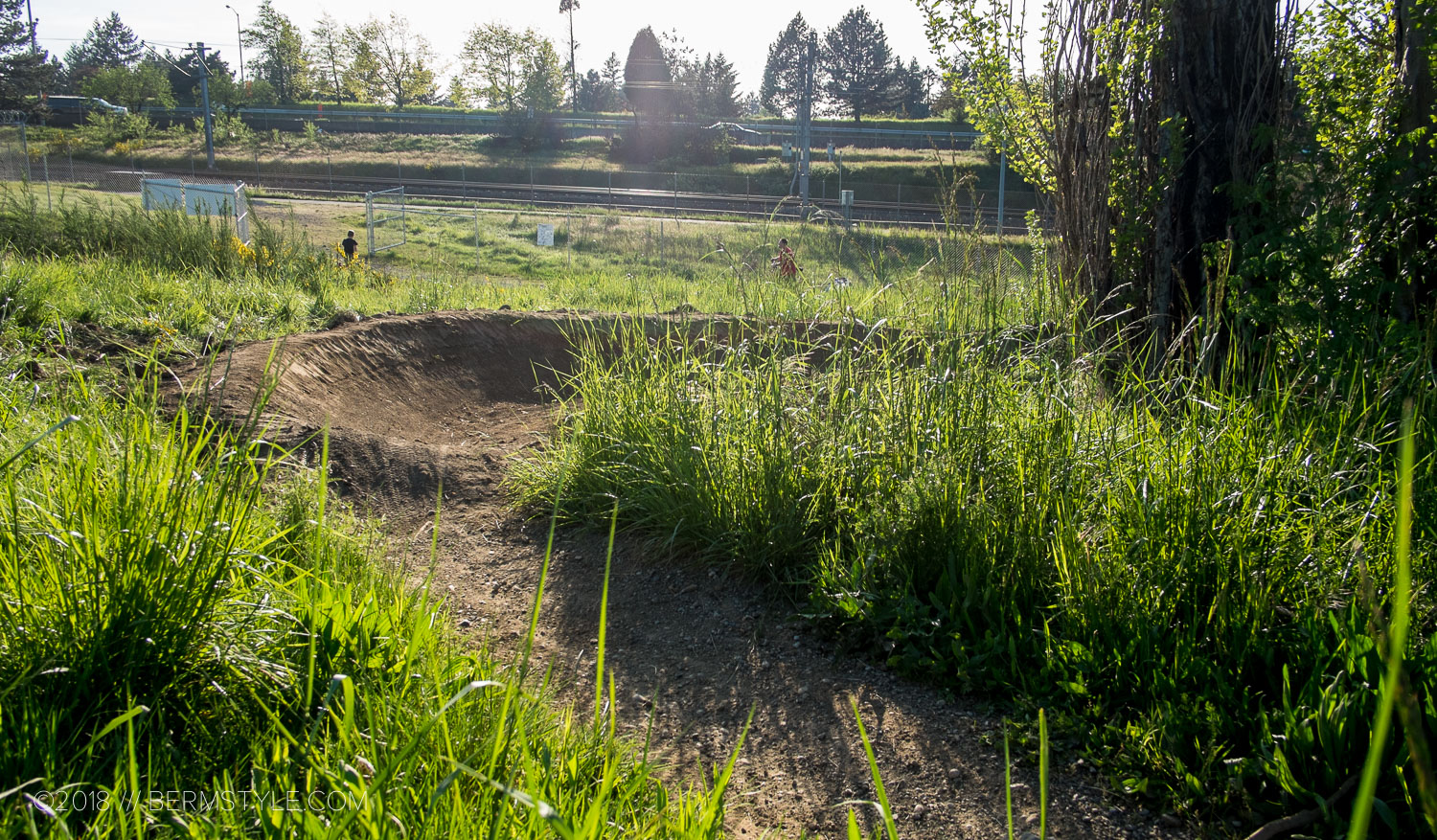 Several of the crew expressed the desire to revisit roller spacing and dial in the flow more, but it was time to think big picture again, and spread our efforts. The goal was to make the entire park more fun, not just a brief section.

It was time to take a look at the north side of the park and the “climbing trail” known as Linda’s Line. (our initial efforts are documented in this post) 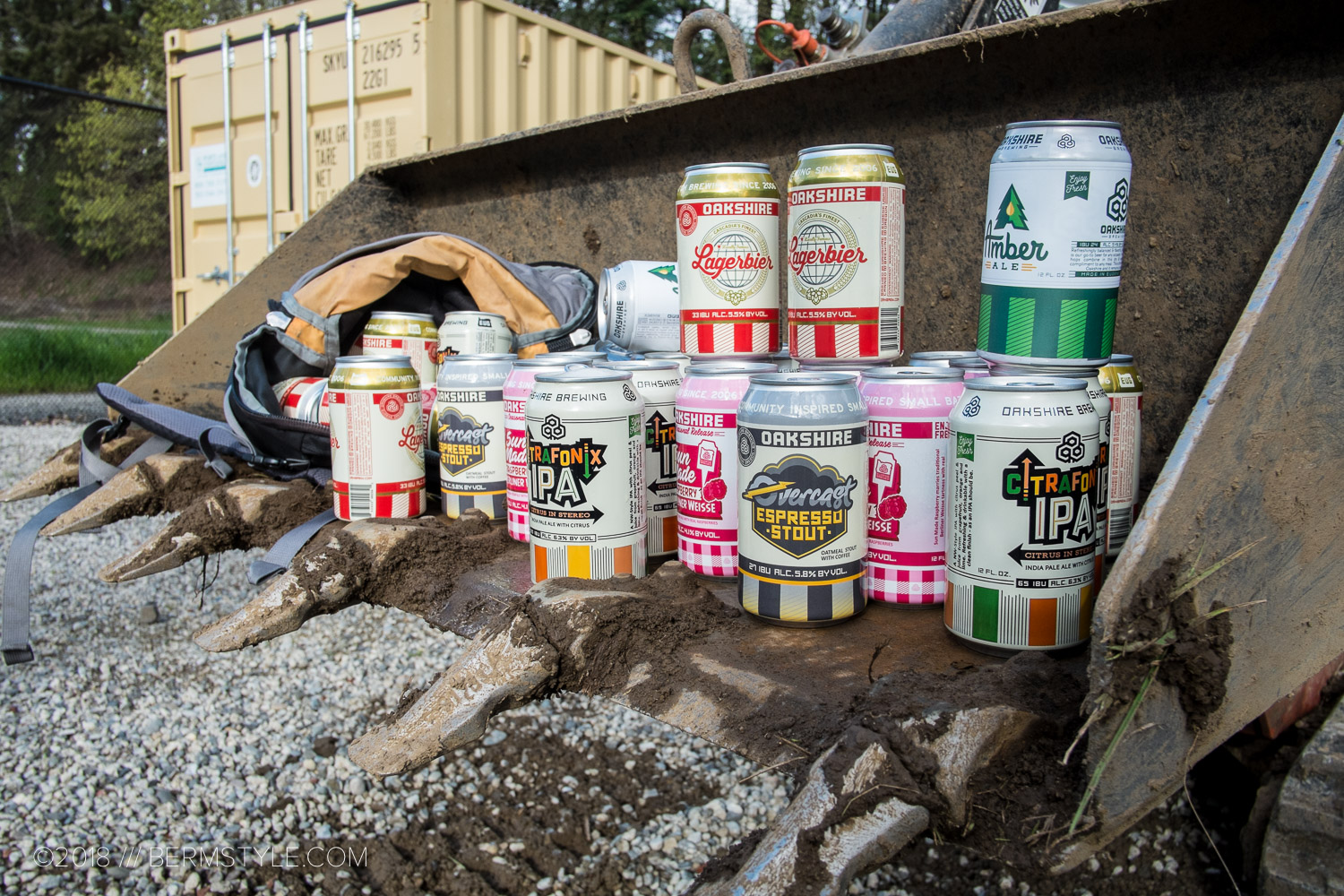 Thanks and shoutout to Ben Morgan and Oakshire Brewing for providing refreshments to the build team.

In one afternoon of work we widened the initial s-turn section, built up the berms and took it from the worst part of the trail to one of the best parts.

After weeks of of logging machine time, I’ve become skilled with its operation and have been able to work quickly and intuitively.

This week I tackled the last flat turn on the hill, mining soil from the inside of the radius, and migrating it to the outside of the trail. (Usually a mini-excavator is used by trail builders for this type of work) I also addressed another berm that was now too small to carry speed effectively and we completely rebuilt it in the span of an evening, finishing in the dark.

We’re now to a place where the trail is starting to really flow – every time we’re out, we’re seeing other riders doing laps on repeat, and enjoying the park. 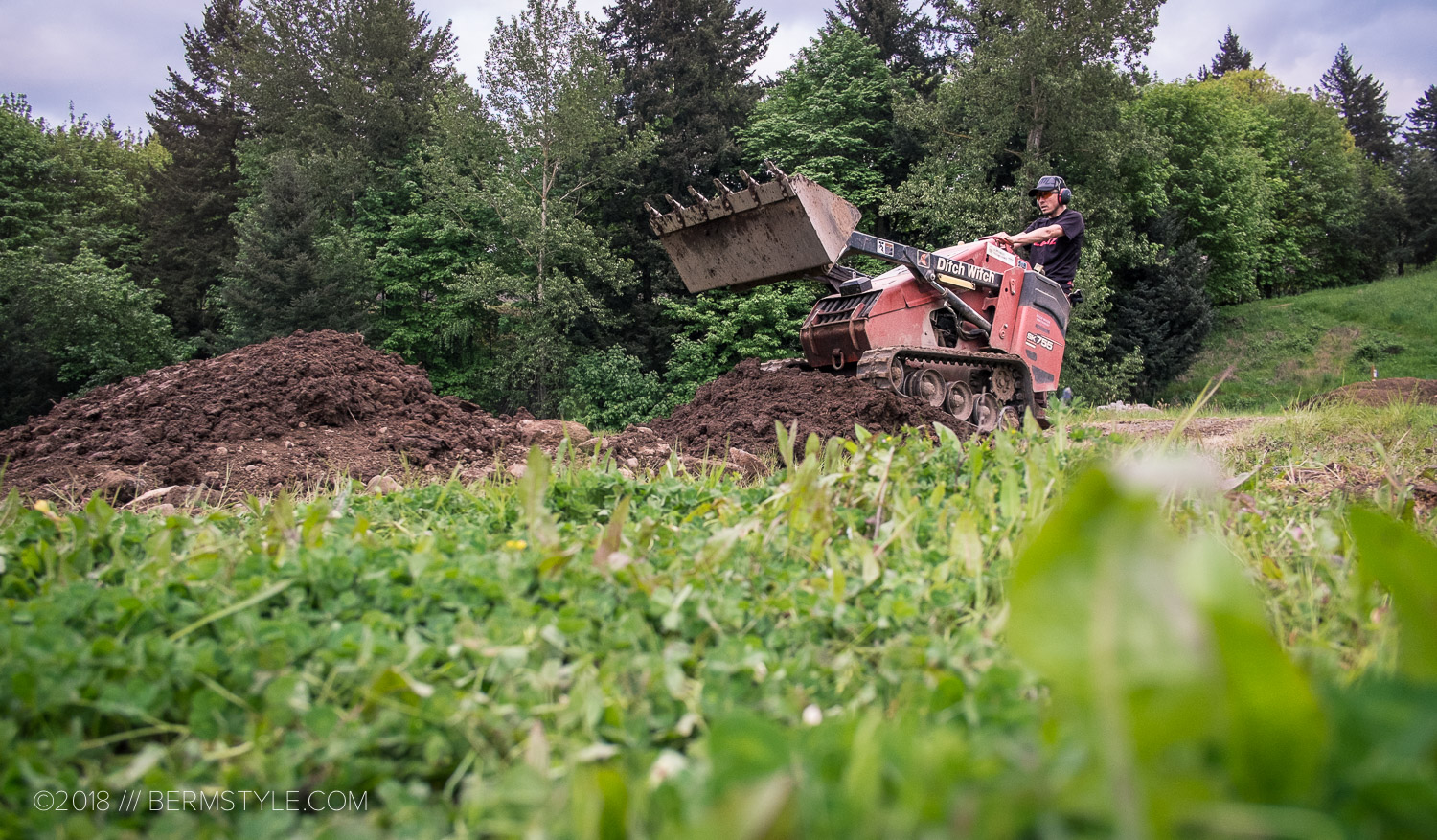 Sourcing and moving soil with the small bucket on the ditch witch took me over 6 plus hours for these features. Next time I’m going to request a budget to rent the appropriate machines for the job.

We’re for the most part done for the season. At this point we all want to actually ride our bikes. We’re all a bit concerned with the final plans for the park, which look to decrease the amount of usable riding area so we’re taking a wait and see attitude and hoping for the best. We’ve never tried to make the experience the most progressive in anyway, we just want an experience that can reflect a bit of our favorite local riding destinations in town. A taste of the riding we wait all week to experience as we seize our weekends. Either way, as long as an opportunity exists to make riding in our backyards better, we’ll be back. 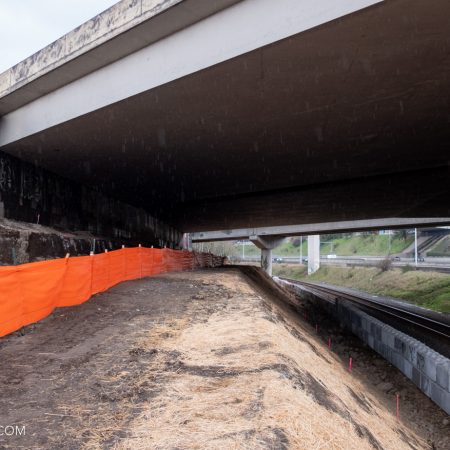