Every few years it seems the two component players in the bike industry try to add another cog to the modern drive train. Personally, I was fine with 8 or 9 speed— thanks for asking. Seriously though, what’s the deal? Is it simply a race to out-do the other? Having an additional indexed click on my shifter doesn’t help me pedal faster. As a self proclaimed “seeker of flow”, I don’t obsess over perfect cadence, and don’t care either. We’re talking about mountain biking here. Not road cycling. Why does my drive train need to be interchangeable with the drive train on a bike that offers a completely different riding experience? I want LESS options in gearing. But that doesn’t mean I don’t embrace the newest tech. I want fast, precise shifts and reliability, and love that stuff works better every year. I covet XTR bling for my bike as much or more than the next guy. So why can’t the energy that is going into “innovating” go into refining internal hub gears to a level useful for off road use? Or make a 1×9 drive train with the full gear range and shift tech of the much hyped 1×11? 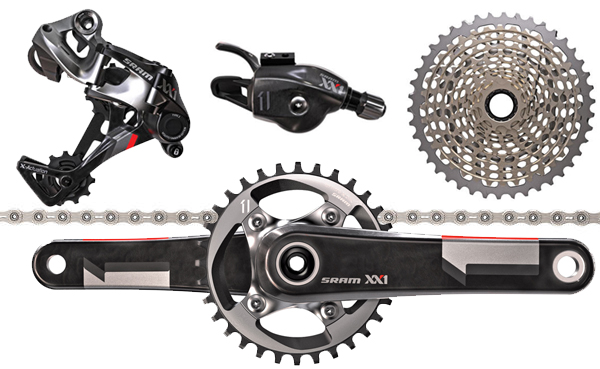 As great as the XX1 SRAM drivetrain sounds, I’ll probably take a pass for now.

I don’t want to constantly be wrenching on my bike to keep it working at its best, and now we’re in the wet season, my drive train gets covered in muck and grime on every ride.  Having a narrower chain and tighter spaced cogs means it works that much worse when it’s dirty. Not to mention that every additional bit of “advancement”  to the drive train means I need to keep my derailleur hanger aligned that much more precisely. I’ve even gone so far as to purchase a Park DAG-2 to add to my personal tool box. (and I already carry a spare derailleur hanger with me everywhere)

The industry continues to push more gears into the contemporary bicycle drive train. For the last few seasons it has been all about 10 speed. Now 11 speed is starting to be pushed on to us. And to put it bluntly, it is starting to piss me off. Every time the chain gets narrower, it becomes that much less reliable, and tolerances that much worse.

I ride mountain bikes. In the dirt. In the mud. Through rock fields. Shit happens. Stuff gets bent. Sticks jump into my spokes at random times, sometimes with disastrous results. Occasionally I’ll crash/have a get off/ lay the bike down. That’s what we do, and when you ride aggressively without abandon, stuff can break. And there’s nothing worse than being on a trip with broken gear, miles from the trail head dealing with a mechanical and jury-rigging some sort of fix so you can ride it out. On top of that, your next day of riding becomes trips to bike shops to find whatever piece is needed to make your bike whole again so you can finished enjoying your trip. These days I don’t travel without at least one spare derailleur hanger, just so I can ride with piece of mind.

I don’t want to think about whether my gear will hold up. I just want to ride my bike. So I made one of my trail bikes a single speed. (My dirt jump bike only has one gear too) Forget creaky parts, pivots that needed servicing, meticulous attention to the drive train — just ride. It’s a philosophy that works, and the single speed movement is always growing.

I’ve been riding single speeds for years but for regular trail riding these days I’m pretty much “over it.” It’s not that I don’t love single speeds — I love everything about the lack of complexity that comes with running just a single gear. The absence of mechanical issues and maintenance means the bike is always ready to go; when the trails are wet and I’m rolling solo, it’s my first pick– on a winter hardtail. Single speed riding makes one a stronger rider. However, it also means a lot of spinning to get where you want to be. When setting up your gearing, you’ll inevitably choose between being able to climb in the hills, or being able to move on the flats. It can be frustrating at times.

A few options are good. I really could get by with just three gears. One for going up. One for flat terrain. And one for going down.

I spent a few seasons riding my all mountain bike with a 1×9 drivetrain with pretty good results. It’s a great compromise between going single speed while keeping the feel and versatility of a geared drive train. Dropping the front derailleur means half as many moving parts, and my MRP Mini G2 Chainguide is a winner- it still does exactly as promised with two seasons of riding on it, with no fuss.

Eventually I “upgraded” to a 10 speed drive train and tried a 1×10 set up that gave me a low of a 32×36. That extra gear made a huge difference during long sustained climbs. Ok, that was kind of nice. Except the shifting on the 2012 ten speed X9 drivetrain has never felt as solid as the nine speed X9 stuff.

These days I’ve succumbed and am running a 2×10 Shimano drive train on my 5″ travel trail bike and I can’t argue with it- it’s been working out pretty well. In this instance, the Shimano stuff kills it in comparison with the SRAM stuff. (although I did twist the narrower chain early on at 400 miles. A Shimano tech at a race swapped it out to a new one for me gratis- thanks) I love being able to climb hills again, and the XTR clutch rear derailleur is actually pretty amazing; my chain almost always stays on. I do check my shifting regularly though, and keep my derailleur hanger alignment spot on, other wise shifting goes to hell. But what if there were other options available?

How about them options 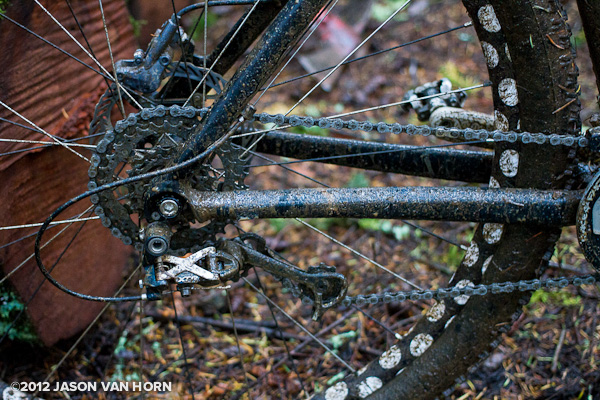 Clearly I’m not the only one that feels this way. I ran into another former single speeder just last weekend. Justin Bruss, a mechanic at WrenchScience.com cobbled together a make-shift five speed drive train using a single speed cassete hub. He admitted his spacing doesn’t quite work out, so he set up a friction shifter to move the chain around.

Peter Verdone is another local former single speed rider that that put together a 1×6 drivetrain with 9 speed spacing. He took things to a whole new level with his backup/ winter bike setup which he has fully detailed on his Wiki page that can be found here. (Justin, take note!) 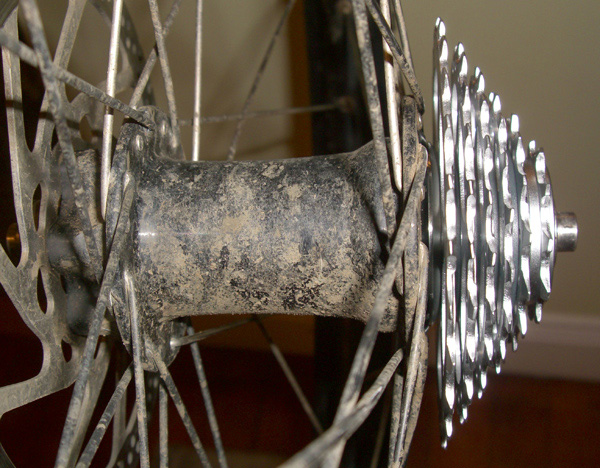 Peter’s level of documented bike geekiness is amazing. His minimal drivetrain takes into account both spacing and has a centered chain line. And other than a number of empty clicks on his shifter, I’m guessing his setup shifts pretty well.

For a personal setup though, I don’t think I’d take it to that level. Although I admire the level of detail he’s considered, I’d still be dealing with a derailleur and all the issues with the chain bouncing around. Fortunately, a 9 speed 12-36 cassette option is now available, which means the 36 tooth low I enjoyed with a 1×10 is now possible with a more reliable 1×9 drive train. YES! The drawback is that the SLX level HG61 Cassette is a bit heavy. However, taking a page from Peter’s book, it should be easy enough to pull the 36 tooth off and put together an XT level cassette with a 12-36 range.

ONE BY IS AWESOME

Although I’m opposed to cramming even more cogs into the existing space, the new 1×11 drivetrain has some interesting design innovations. (read up on the new tooth profiles) I’ve always been a fan of dropping the front derailleur all together. My first purpose built “downhill bike” was a 6″/160mm travel bike with a 1×8 drive train and I rode that thing everywhere. Ironically, I still have a bike with a similar setup. (my Nomad) The geometry is much more dialed on my current bike, but now we call it an all mountain bike, although these days “Enduro Bike” is the term we’re using. It’s still running a SRAM X9 1×9 drive train with a 34t low; I’ve already got my eyes on the HG61 though with the 36… 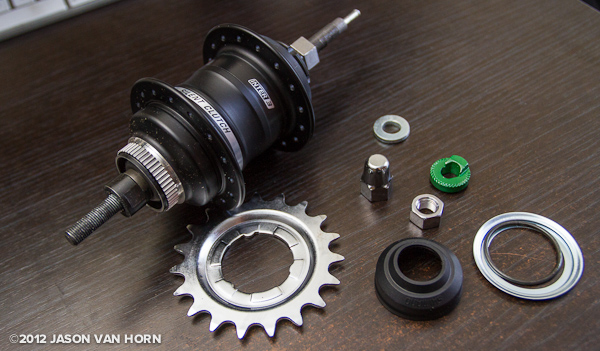 Why not just three speeds?

My trail bike with its XT/XTR 2×10 drive train is working well for me, so I don’t see why I’d want to mess with it. But my single speed/ mucky weather bike is a completely different story. I’ve been looking into my options and just bought a three speed Shimano Nexus internally geared hub. This thing is heavy enough to do bicep curls with, and the tensile steel axle doesn’t promise much in the way of durability, but the promise of a single speed drive train with an uphill, level, and downhill gear? Sounds just about great for my lunch time single track ride in the city. I’ve got some projects ahead of me.

Ok, so part of the fun is messing around with gear. However, the bottom line and the question I pose is this: why can’t the industry come up with a better way that works better? More simple, less options, and high performance. Or is everyone that rides a bike a closet roadie when it comes to needing 20 or 30+ gear options? I can’t be the only one that thinks this way.