I logged countless hours toiling in various bike shops during my stint in the industry. Whether it was behind the counter, walking the floor, or hiding out and wrenching in the back, I loved talking about and being around bikes all day. For a card carrying bike geek, the best shops are like candy stores filled with new shiny objects just waiting to drain the wallet and get dirty. The worst part of working in bike shops is not being able to afford the stuff you  sell.

For some reason though, these days I don’t spend as much time in bike shops; I’m not sure why, but many of them just don’t seem as inviting as they used to. But then there’s Huckleberry Bicycles in SF, a shop that breaks the mold.

As a rider that identifies himself as a trail/dirt rider first, it’s almost a surprise that one of our favorite shops in the Bay Area happens to focus on the pavement riding demographic. Still, while I live for the times I get to shred trail, the reality is that I live and work in an urban environment, and the bikes I ride on a daily basis are better suited for pavement than dirt. In my day to day life I still often dress for the ride; the difference is that my go to “kit” happens to be bike friendly jeans and a fashion-friendly merino t-shirt. It also doesn’t hurt that the owners of the shop are friends of ours.

My last full time bike gig was managing the online presence for a local bike shop chain, where I was coworkers alongside  Zack and Jonas, now two of the owners of Huckleberry Bicycles. They both managed local locations of said chain, and under their leadership, both stores thrived. 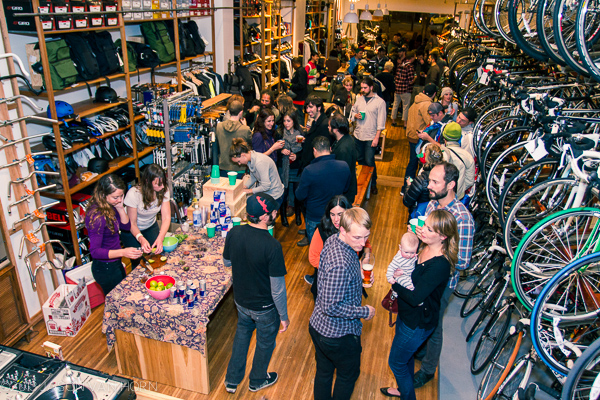 The crowd during the SF Bike Expo after party

They’ve managed to take that experience and expand upon it with a store that is a great retail experience with regular events open to the riding community and some great energy. Being based in the urban heart of San Francisco, they’ve limited their bike selection to bikes suited for pavement and a few cross style machines. That said, they have the most diverse collection of bike friendly soft goods around, (including a sizable collection of women’s products) and it is amazing to see all the diverse riding gear they have curated, considering there is a minimal amount of spandex on the shelves.

We’re consistently referring friends looking for a urban city bike there, as they have the best selection in town. Although they’re still only in their first year or so in business, things are going so well they’re expanding into the space next door.

Check them out: Huckleberry Bicycles 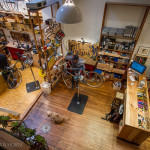 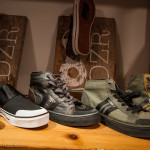 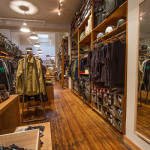 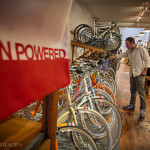 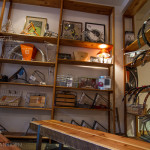 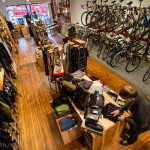 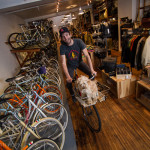 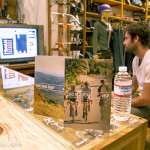 Kevin, the service manager drops some blocks on the shop Nintendo during the Giro New Road Launch Party. 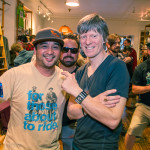