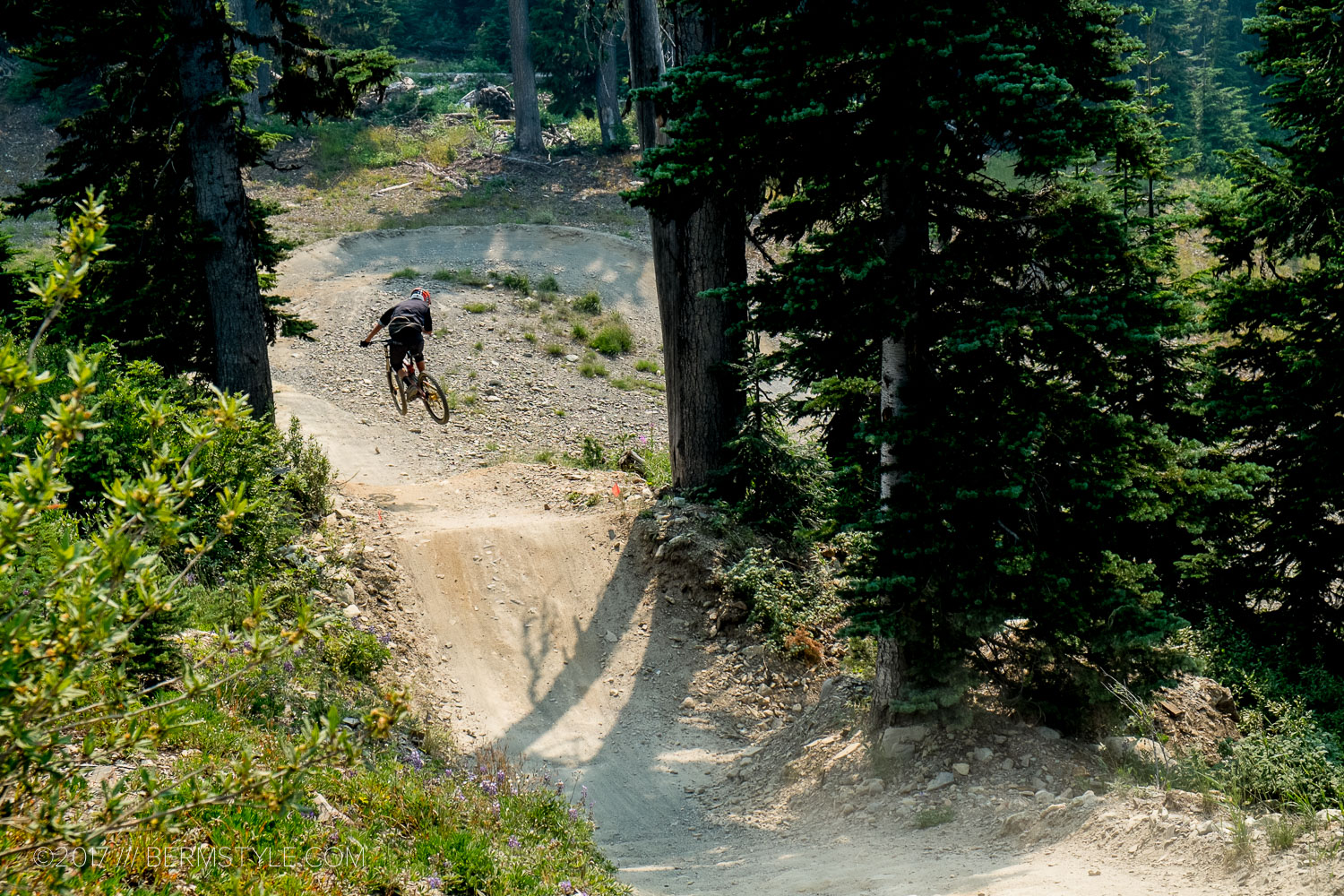 This weekend we made our return to the MTB mecca of the north. I had planned to make it up at least once last year, but somehow the trip never happened for some reason; not having a dedicated park bike could have been part of it. Though I’ve ridden Whistler on a 6″ travel enduro rig and had a good time, the high speeds and stutter bumps on the jump lines can be a bit jarring. Especially when your memories of A-line include close calls over jumping to flat on some particularly large hits. 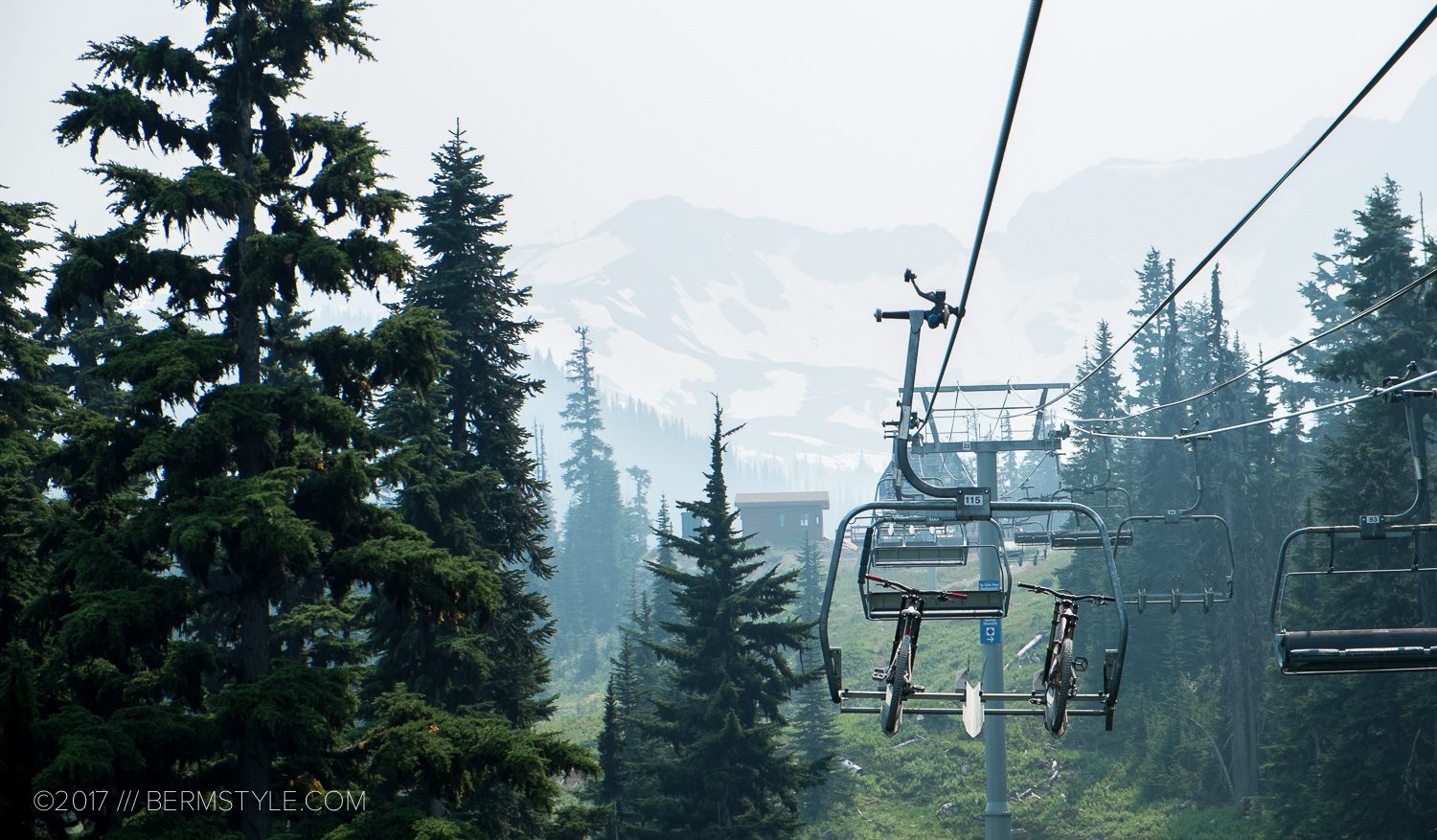 Smoke from fires made riding the chairlift a bit surreal.

This year though, a new DH bike has joined the quiver as a birthday present to myself. And when my brother had a block of time off, Inga pushed us to get an impromptu weekend on the calendar. Although smoke from a series of forest fires and air quality warnings were a concern, we departed as planned after getting off work Friday.

I detest driving through Seattle traffic, so we timed our drive through late in the evening, stopping near Bellingham for the night before continuing the drive Saturday morning. The bike park offers an afternoon pass option from 3-8 called Extended Play and we arrived with plenty of time to gear up, taking our first chair at 3pm on the nose. 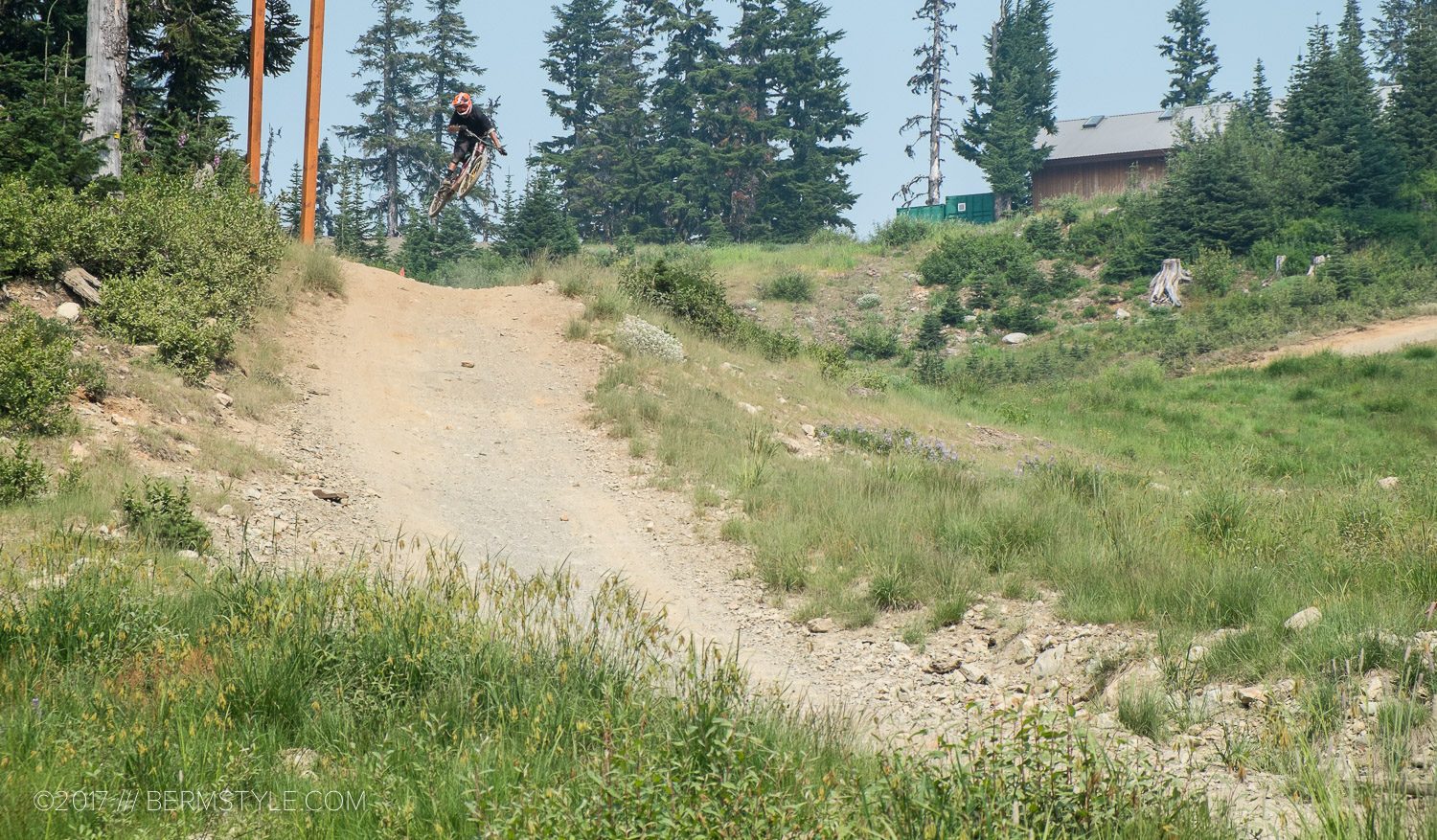 Our first run?  Crank it Up, the classic warm up. Crank it Up is as fun as remembered, with the step ups, downs and banked wallrides. The downside is the crowds of stacked up novice riders creeping down the track. 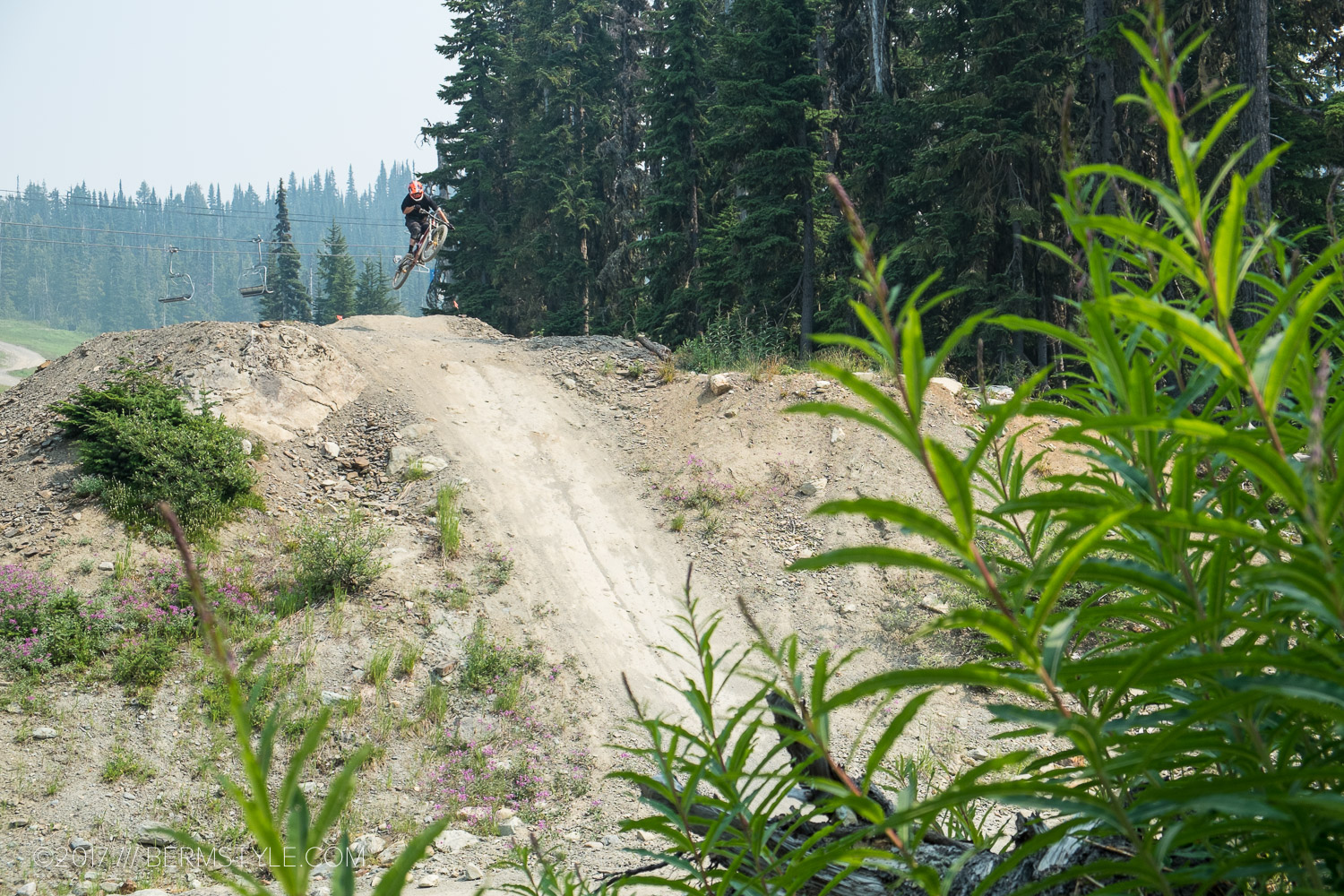 The step down on Freight Train

Following it up with Blue level technical trails that were far less busy, we headed higher up the mountain for a rip down Blue Velvet. Although the upper mountain was less crowded, the stutter bumps on Blue Velvet were intense, and that was the only time we elected to run it. 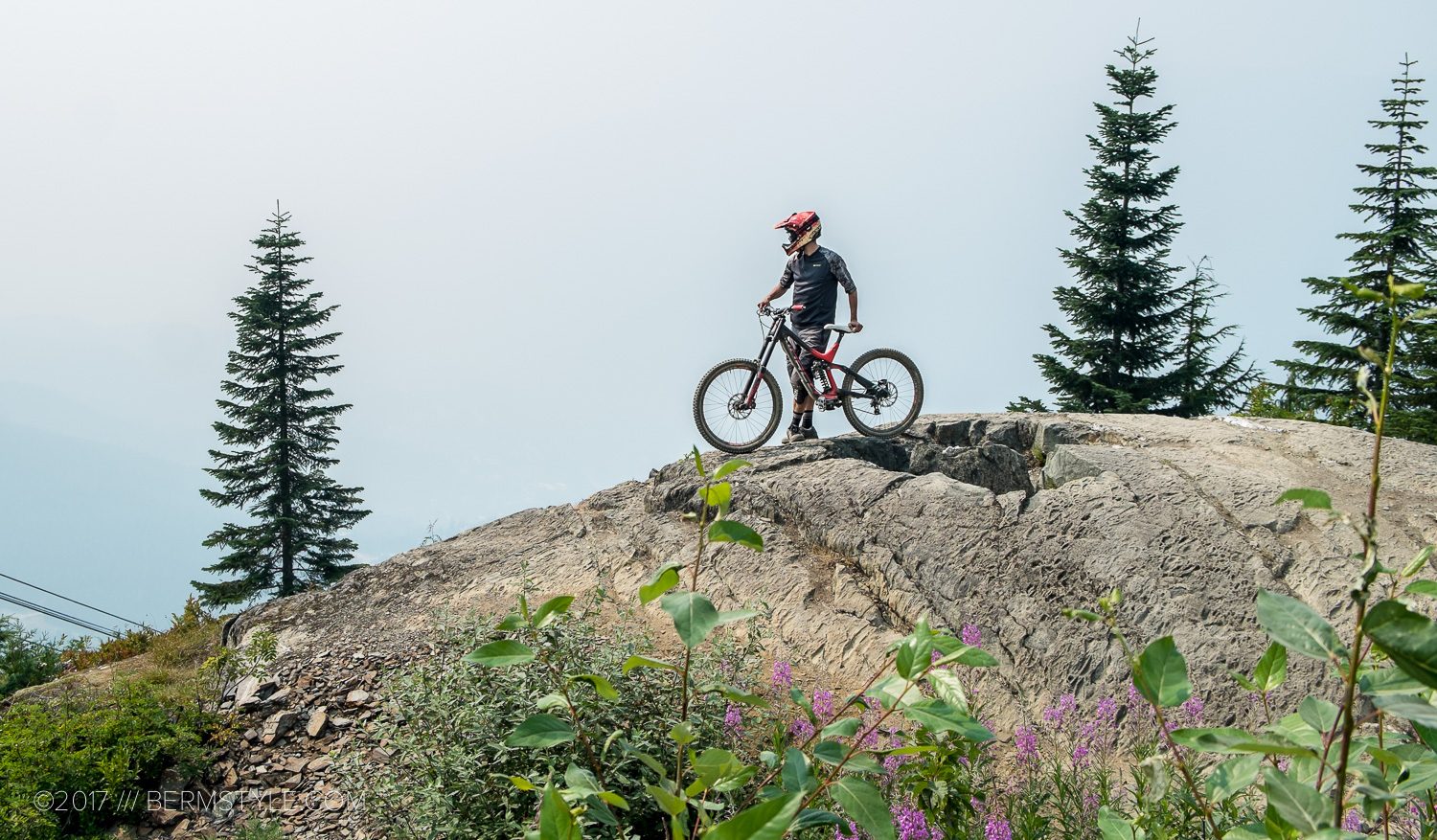 What happened to the view? Sunday’s visibility improved… a little. Fortunately the smoke didn’t bother us much.

On the other hand, the tracks containing double black diamond jump lines were super chill in comparison. Although it’s been a while since I’ve opened it up on a big travel ride to point it at monster size jumps, it came back after a few runs down. It was fun to work out the speed and take turns leading, but eventually we just jumped on the tail of someone that had the lines dialed. By the end of the weekend we were sending ourselves skyward with glee. 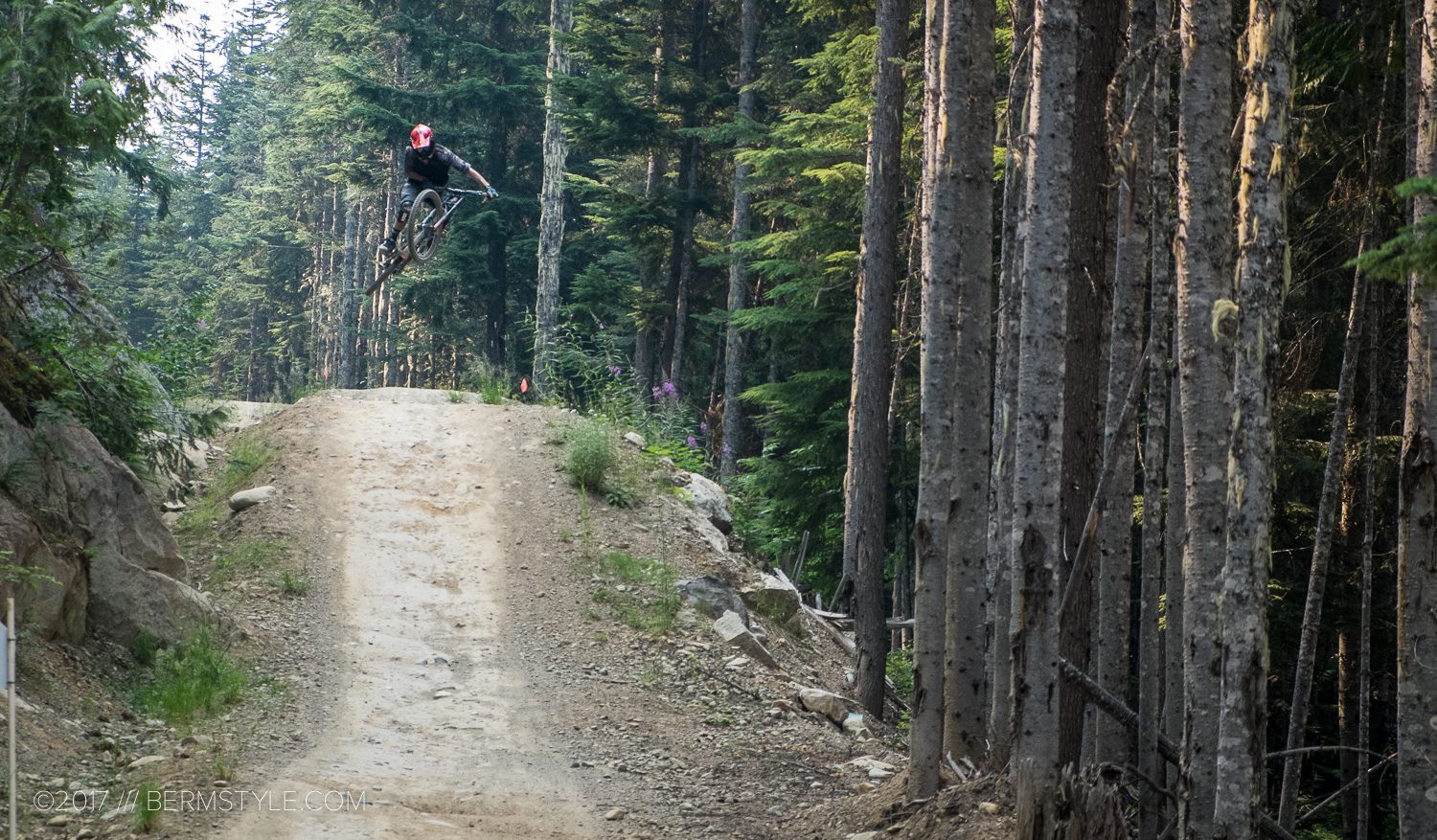 The last set before dropping into Dirt Merchant.

We made sure to get lots of runs down the technical single track lines too, rolling down Schleyer, Clown Shoes and other classics. Riding super burly tech trail is just as fun as pinning it at the booters. 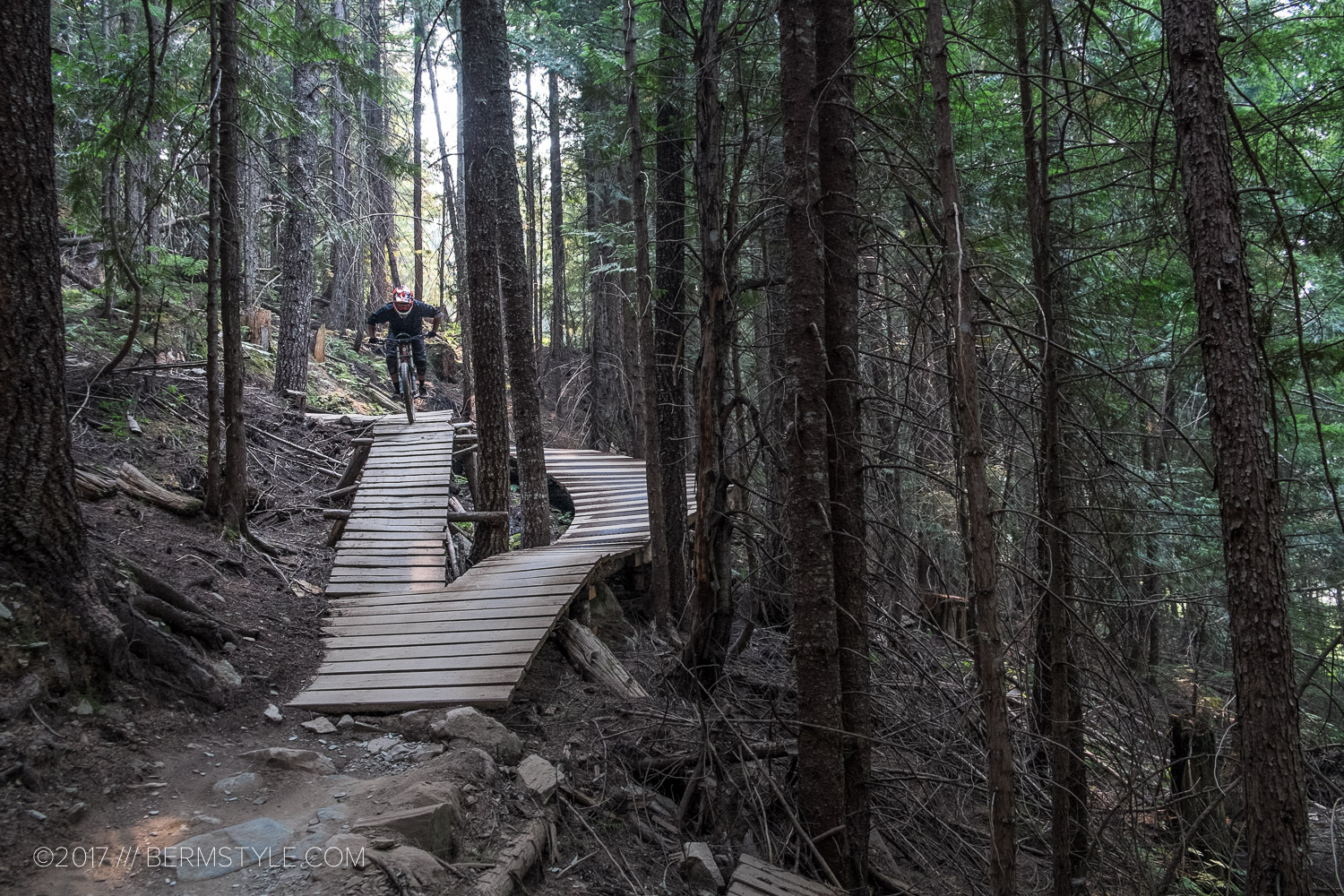 Following our session at the park, we’d load up our packs with snacks and beers to make the trek over to Lost Lake. After a short swim to the dock at Lost Lake, we’d take advantage of the post swim push button shower, which makes dirt bag living in the resort town a lot easier. 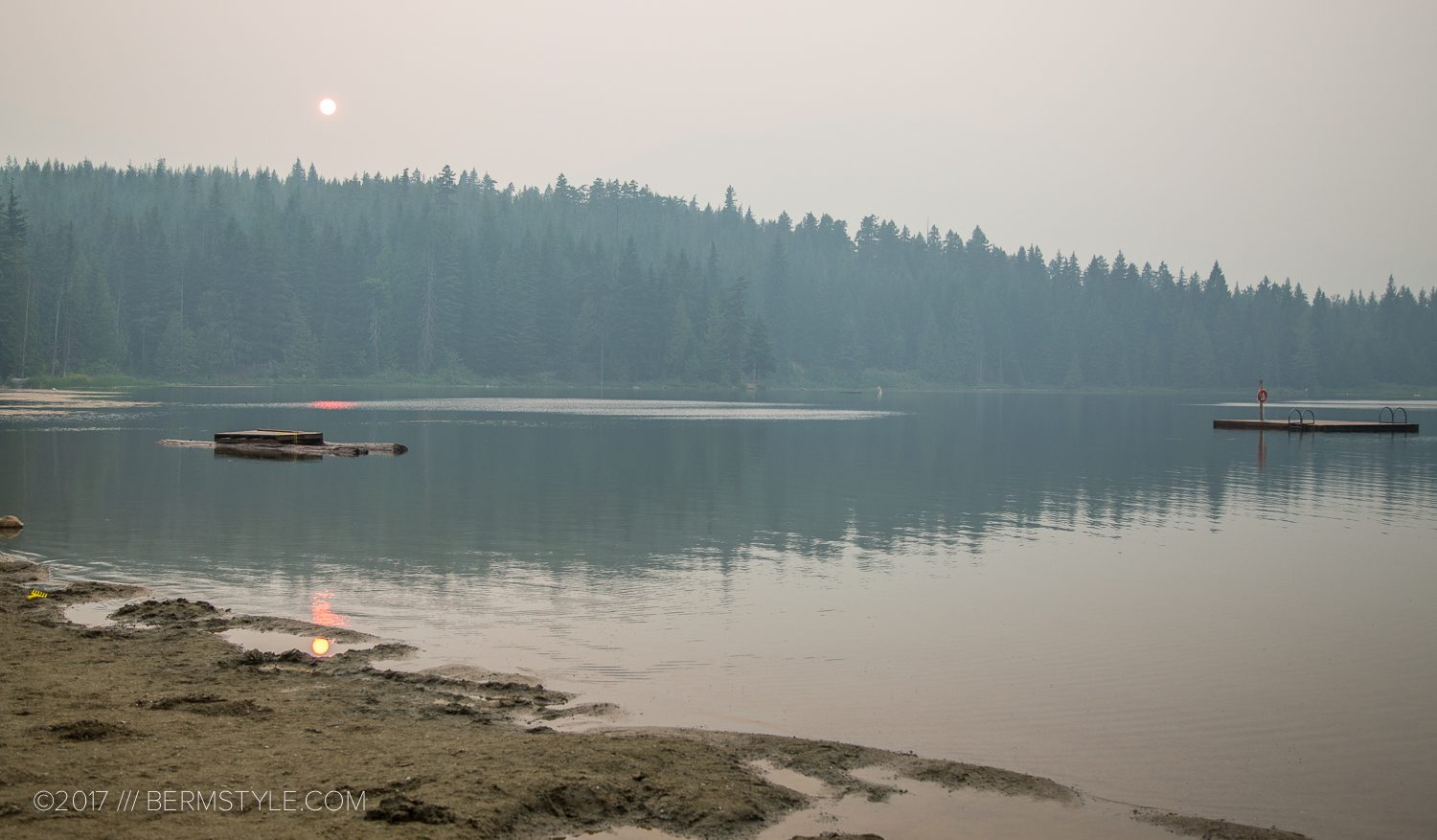 Before we hit the road on Sunday, we headed back to the lake for another cool down swim.

The weekend was a solid way to break in a new DH ride. That said, by the end of Sunday’s all day riding session my hands were seriously unhappy. I’m planning a few component changes that include swapping to new bars and grips to see if they will aid with vibration damping. A lighter Boxxer spring may also be in the cards. 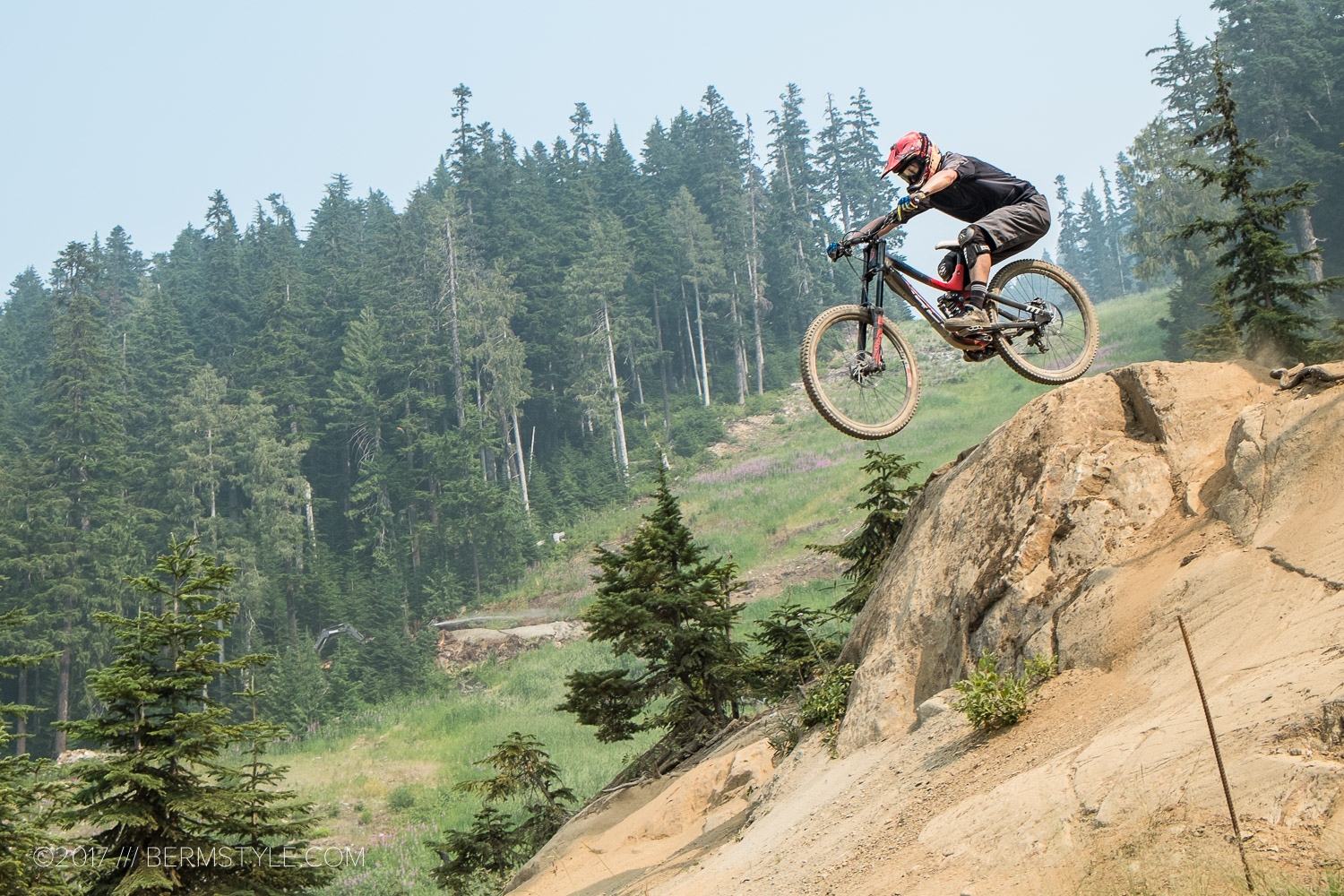 The only thing I’d change for the weekend would be to download the latest bike park trail map. We made a big effort to ride as many different trails as we could, but some routes can be tricky to find if you can’t remember where to access them. We wanted to check out the new Creekside zone and totally rode by the trail head repeatedly. 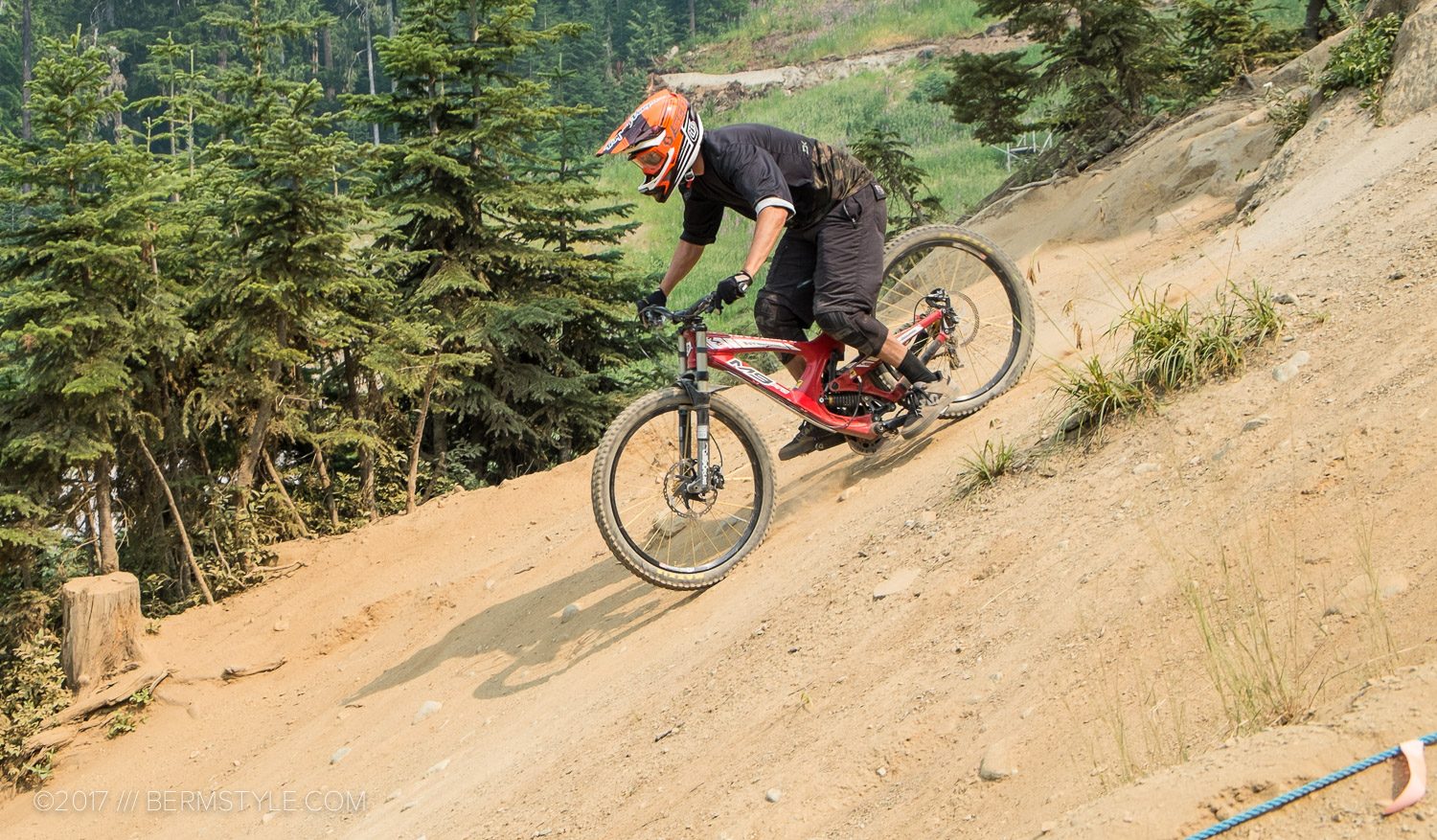 Packing up Sunday, we beat past the boarder around 11 pm, for a super fast crossing back into the States. Traveling at night is the way to go; they didn’t even get out of the booth. All things done, we got in tons of amazing riding and made it through the weekend without a single mechanical. Winning!

2010 Whistler Edit from the Eugene Crew

Whistler Bike Park set to open on May 15