SDG’s newly released Tellis adjustable dropper post lever improves on the cable camp design of the previous iteration. In addition, it adds adjustability and compatibility for both Shimano iSpec as well as SRAM’s matchmaker systems. The ergonomics of the thumb paddle have also been improved, with improved ergonomics, and additional texturing for ease of actuation. However, it’s the improved cable clamp design that does away with the grub screw that we appreciate the most, resolving the Achilles heel on what has been otherwise a best-in-class product.

We’ve been running the SDG Tellis Dropper posts for a few seasons now, and in that time they have been reliable, day in and day out. Except for the lever, which has been the weak point; the way the grub screw in the original lever pinches braided cables has caused me a few problems. I’ve experienced cable failure twice now while riding. Fortunately, both times I’ve been within a few miles of my vehicle, where I’ve either had to replace the cable or cut the housing shorter in order to use the shortened existing cable. (after cutting off the frayed end)

Though this cable failure would have required a trip to the bike shop for many, after numerous cable failures on my derailleurs, I never travel without a spare cable, cutter, and the tools required for a cable swap. Each time, I have been able quickly to repair the issue and get back on the trail, sometimes in just a matter of minutes. (this would not have been the cause with a hydraulic line)

Though infrequent, these snapped cable incidents were frustrating, and I’m glad for the new cable clamp design of the lever.

As a rider that runs Shimano on all his bikes, I admit I had difficulty finding a position I liked when trying to pair the Tellis lever with i-Spec EV. I even gave up for sometime. It can be a bit of a challenge figuring how to mount and position the levers and shifters using the i-Spec system, especially if you misplace documentation isn’t easily found; it can take some time and figuring to sort it all out.

I’ve always liked the band clamp mounting option as it was the easiest to configure. I’ll confess though, the clamp integration looks so clean and so much better on the bars. I never managed to source the band clamp, but recently, while building up a down country rig, I decided to try again, this time pairing it with Shimano M8020 4-piston brakes and i-Spec II.

Although the M8020 have been some of my favorite brakes to date, they’ve been in semi-retirement in favor of the newer XT M8100 models. While I love the feel and power of the latest models, I have missed the clamp of the M8020. I also had a lot better luck (admittedly I was in a better mental place at this point to spend some time digging through my parts boxes for the right pieces required for the proper setup. Finding a bolt assembly for a front shifter was key — a piece that’s not so common these days with 1x drivetrains the current norm. That front shifter mounting bit did the trick though, and I managed to dial in my ideal location, and the updated lever has proved to be a great upgrade. I love the texturing and design changes to the lever and it has a great feel with great traction and maintains that feather-light actuation the Tellis is renowned for.

When it comes to dropper posts, the factors that concern us most are longevity, ease of maintenance and ease of use, as well as reliability and cost of ownership. The SDG Tellis Dropper Post nails all of these and does it all at a great price point. When you consider many dropper posts cost more than half of the Tellis just for routine service, the value of the Tellis just continues to raise. The best part is that it’s been available in a 170mm length version for a while, and it’s been my post of choice.

We’ve been running the 150mm iteration of the Tellis post for the last years and it’s proved to be the most reliable post I’ve ever used. Other than the two cable failures at the lever as described above, it’s performed flawlessly and it has the lightest action at the lever of any post we’ve tried to date. It also works when the weather turns to crap in the cold and wet — you know, those times you need it work the most.

Here’s the thing with dropper posts though. Like any component on your bike with moving parts, they will eventually require service. If I can get two seasons from a post before this point, I consider it a win. I’m currently going on three years now and all three models I’ve had in rotation are going strong!

It’s the eventual cost of servicing a dropper post that gets you. Last time I checked it was over $125 to service a Rockshox Reverb or Fox Transfer post. Unless you live in an urban area with a top-level service center, you’re also looking into the cost of shipping your seat post to the manufacturer for a rebuild, so prepare to tack on at least another $25. Plus you’ll be a bike down while your part is off for servicing. Not so great if you’re on a riding trip — and we know firsthand how annoying it is to have a post malfunction after you’ve driven 20+ hours to ride epic trails.

If you’re mechanically inclined with a lot of patience, you could order the tools and parts and do it yourself. That’ll cost you too. Not just the cash, but some posts are rather complex and have a very steep learning curve for the repair, even for someone like myself that has serviced bicycle suspension as a shop tech. (sadly, I have at least three posts sitting under the workbench in my garage that have been out of order for over 3 years now… one of these days…)

When the SDG Tellis post eventually needs repair or service — it should be mentioned the post includes two years of worry-free insurance against this with its 2-year warranty — all you need to do is swap out the cartridge kit, a repair an experienced do-it-yourself home mechanic (or local bike shop)should be able to easily manage.

All this is to say that we’re big fans of the Tellis post. Years later, it retains – by a large margin – the title of most reliable / best performing dropper post of all the models we’ve run to date. That says a lot, as we’ve spent time, ran, and or own posts in an extensive list that includes several generations of Reverb posts, the Fox DOSS and Transfer, 9point8, KS models, Trans-X, Shimano, Giant, Specialized, X-fusion, Gravity Dropper, Raceface, BMC, and PNW. 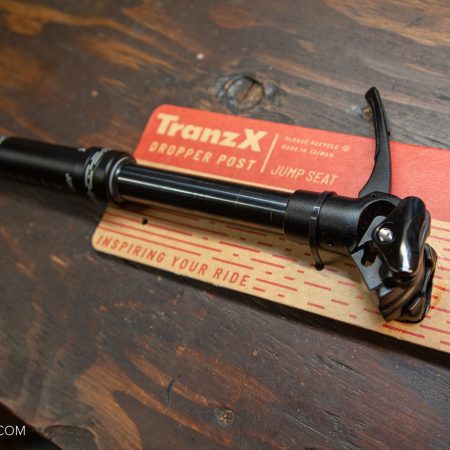