SRAM’s XX1 has propelled the 1x drivetrain into the mainstream for trail riders with its wide range of gears and simplicity. Removing the front derailleur and shifter not only makes space on your bars, but can drop almost a pound of weight off your bike. The best part of dropping the front derailleur though, is never having to think about what gear you’re in. You simply shift.

As riders with leanings towards the DH /gravity side of the spectrum, we’re no strangers to one-by drivetrains.  The security and simplicity enjoyed by ditching the front derailleur can be a pleasure to ride, provided your rides don’t feature steep sustained grades. I ran a 1×9 drivetrain on my main trail bike for years, and enjoyed the security of a chainguide with minimal maintenance. As a former single speeder, it was a compromise that split the difference, reducing maintenance while keeping the luxury of gears. However, having a low gear for climbs AND a high enough gear to attack descents wasn’t an option until recently.

Although it’s received numerous accolades, the extravagant cost of XX1 has kept it out of reach for the majority of us that are unable to justify a $400 price tag for a cassette that only has the life span of 1000 miles or so— and that’s just part of the ongoing cost to maintain it.

Fortunately, a few of the smaller outfits have stepped up to create a cost effective option that can be retrofitted to your current 10 speed setup. 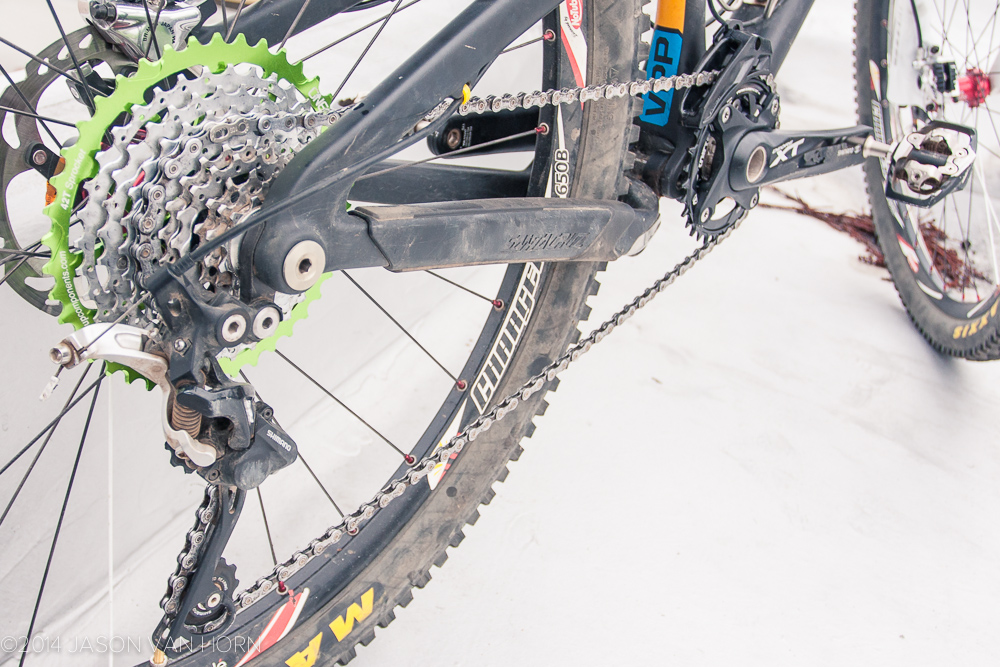 Since upgrading my trail bike to Shimano XT 2×10 featuring the clutch rear derailleur, I’ve been very happy with its performance, and it was awesome having a climbing gear again. I may have have gotten a bit soft, as I no longer had to muscle up hills, but I no longer dreaded heading out for rides with long sustained climbs on days I felt like crap.

Although my preference in components strongly favors Shimano over SRAM and I hate the idea of using an even narrower chain, I was a bit envious of friends running XX1. However, I’m a Shimano fan— the stuff works. For months I was hoping Shimano would release a rear cassette that simulated the wide gearing of SRAM’s 1×11 setup in a 1×10 configuration. Even an 11-38 would have been awesome. However, when talking to Shimano’s marketing guys, it didn’t sound like it was going to happen. The reasons included less than optimal gear ratios, etc. Although no one would admit to it, the rumor mill said they had their own 1×11 drive train in development.

Fortunately, a few options in the aftermarket have presented themselves. I’ve been looking into options and when OneUp Components released their 42 tooth cog for 1×10 drive trains, I knew it was the solution I had been seeking. I reached out and Neil at OneUp sent one out for me to try. It would be a few days though, as they’ve been so popular they’ve been sold out.

As I had some time, I first looked into a solution for chain retention. E*thirteen Components is based in Petaluma, and Chris and the guys are awesome dudes that make a good product— the choice to run one of the Guiderings was a no-brainer. I’ve run their rings in the past, and the one on my dirt jump bike, although several years old, is still running strong. The new Guiderrings  are 8, 9 and 10 speed compatible, feature a narrow/ wide tooth profile, and are designed for single front ring use. I’m running a 170mm length Shimano XT crankset, so I needed the 104mm BCD ring. I selected a 32 and 34 tooth to have a few options down the road. 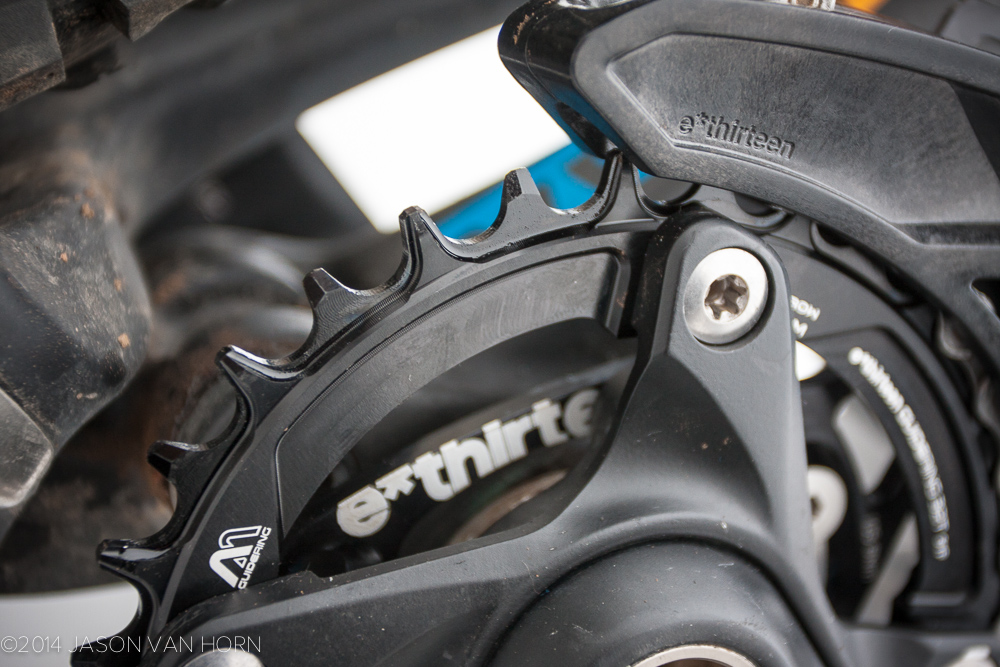 The narrow/ wide tooth profile is one of the main features of  XX1, that combined with a clutch derailleur, aid with chain retention, even without a chain guide. I decided to go with a chain guide anyway- I’ve had injuries that were a result of unwanted chain derailment at the worst possible moments, and a guide is cheap insurance with a minimal weight penalty. For chain retention I went with the XCX+, also from E*thirteen. It’s listed at 56-60g with a chain ring range of 28-36t. It’s essentially the upper slider from their LG1 system. I’m skipping the bash guard/ bash ring for weight savings, and for most local trail riding should be fine.

Now I had the front of my drivetrain sorted, it was time to look into expanding the gear range of my cassette. 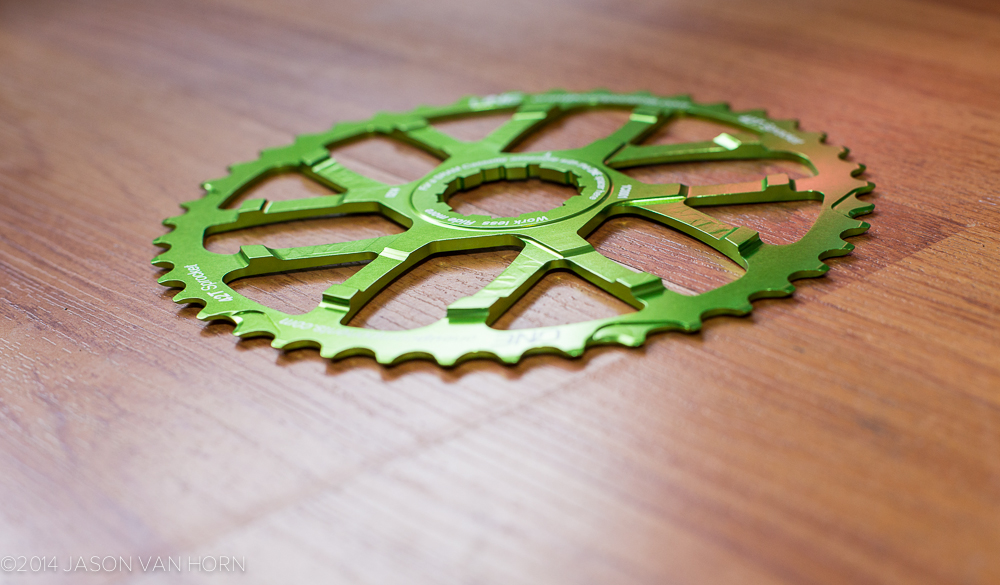 At $100, the cassette hop-up solution offers almost all the benefits of 1×11 systems at a fraction of the cost.

Let’s do the math:

The best part is that you can run this set up with Shimano SLX for the maximum in cost savings. We’ve been running an SLX drive train on one of the bikes in the quiver, and it’s the best value in components today, hands down.

Here’s the run down on the list of parts needed for the conversion as I set it up:

A long cage rear derailleur isn’t a bad idea, although I’ve heard reports that a medium cage works. I’m rocking the Shimano XT RD-M786 in a long cage version since that’s what I have, but the SLX version would totally work too. 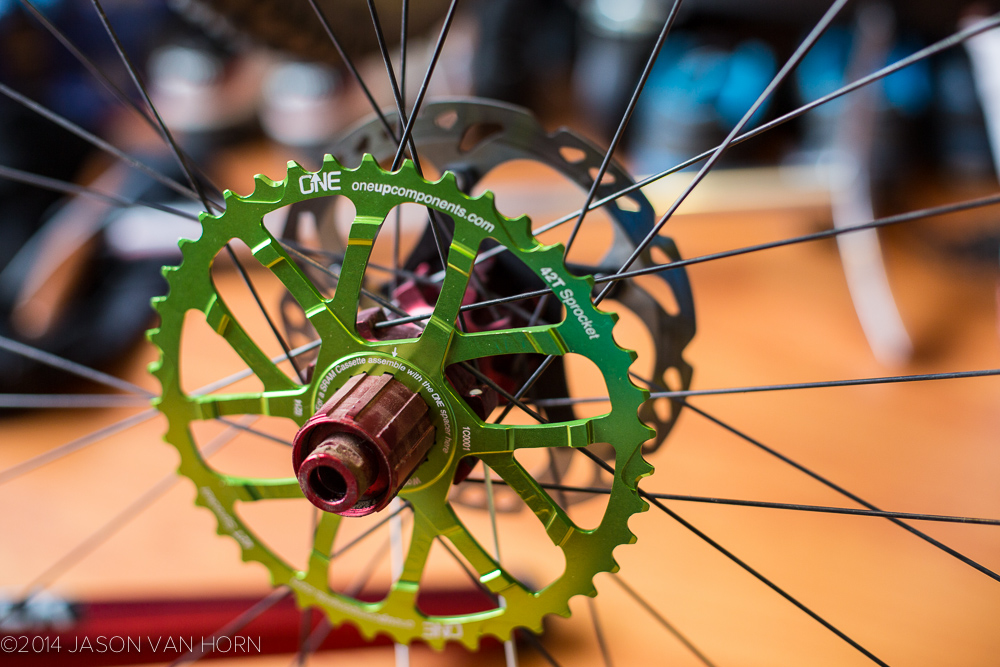 Installing the OneUp 42t is simple as changing a cassette.

The Conversion — Installing the OneUp 42T

Installing the 42 tooth OneUp cog is easy and only took a minute. OneUp offers a simple graphic that makes it a no-brainer. For the Shimano XT 11-36 cassette, I removed the 17T and a spacer, which is replaced by the OneUp cog, with a spacer behind it. 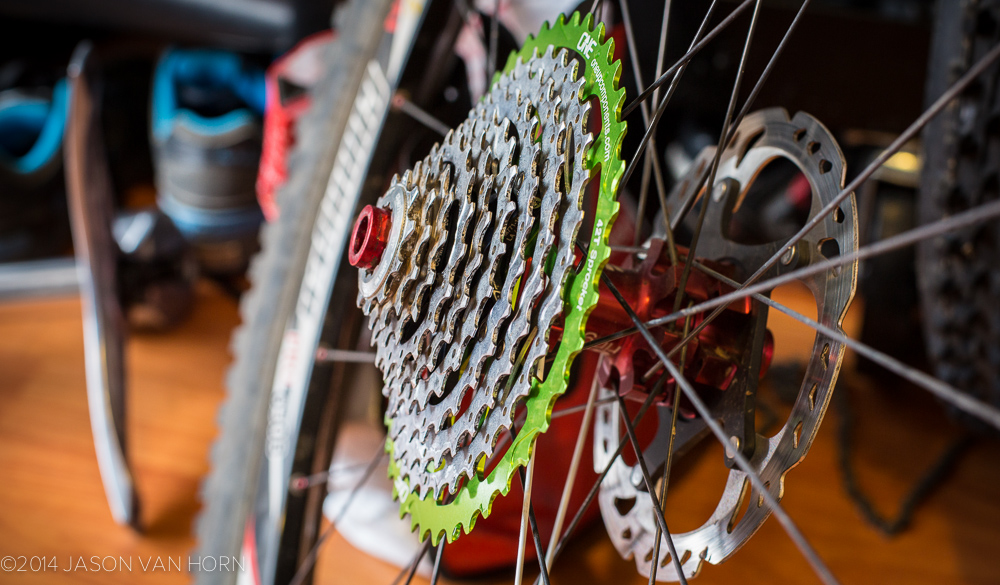 I spent a good deal more time determining how I was going to set up my single front ring, as chainline was a concern.

I’m running a Shimano XT long cage rear derailleur with Shimano XT cranks on a Santa Cruz Bronson.  Getting the XCX guide centered on the E*thirteen Guidering took considerably longer than setting up the cassette.

The E*thirteen Guidering can be flipped for a 49mm or 50mm chainline. Since the Guidering replaces the 38tooth ring on the outside mounting point, I set it as narrow as I could. I also left the bottom bracket as it was, with the single spacer setup. Because running a 1x ring set up puts more stress on chainring bolts, replacing the stock alloy bolts with steel ones is recommended. As the Guidering is wide, the aftermarket steel single speed bolts I purchased weren’t long enough, so I dug through my tool box until I found some steel bolts of appropriate length.

Getting the XCX guide centered over the chainring was where the challenge came in. I begin with a single spacer and did the installation, and it was a trial and error scenario.  I ended up having to remove and reinstall it several times until getting it centered. (I ended up running two of the wide spacers.) 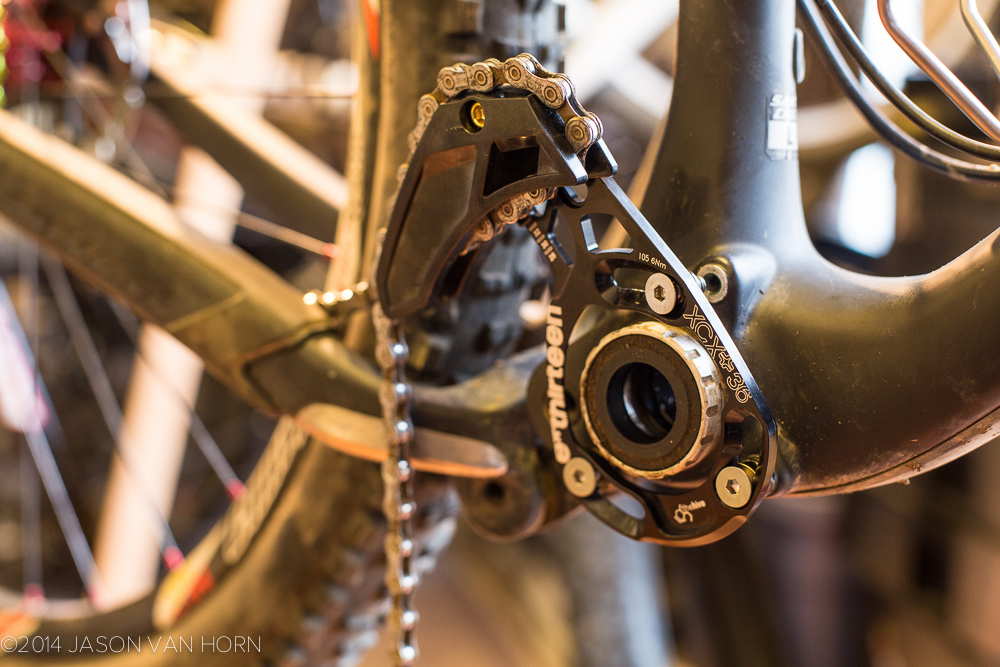 Getting the XCX guide centered was a bit of a pain. Budget a bit more time for this part.

The final step was ensuring I had enough chain. Fortunately I recently invested in some KMC Masterlinks and Masterlink pliers. This investment paid for itself right then. I didn’t haven’t to remove any links— I was already running one more than I needed. (oops)

The final step was to unbolt my rear shock to verify that chain length was adequate when the wheel was at its position completely bottomed out.

Setting up the rear derailleur was just a matter of screwing in the b-tension screw until it was completely bottomed out. OneUp recommends removing the plastic washer that is attached to the screw if it isn’t quite long enough. With the b-tension screw all the way in, down shifts are much less clean and responsive, so I’m running a bit less cable tension. After making sure it shifted cleanly in the stand, it was time to get out and ride. 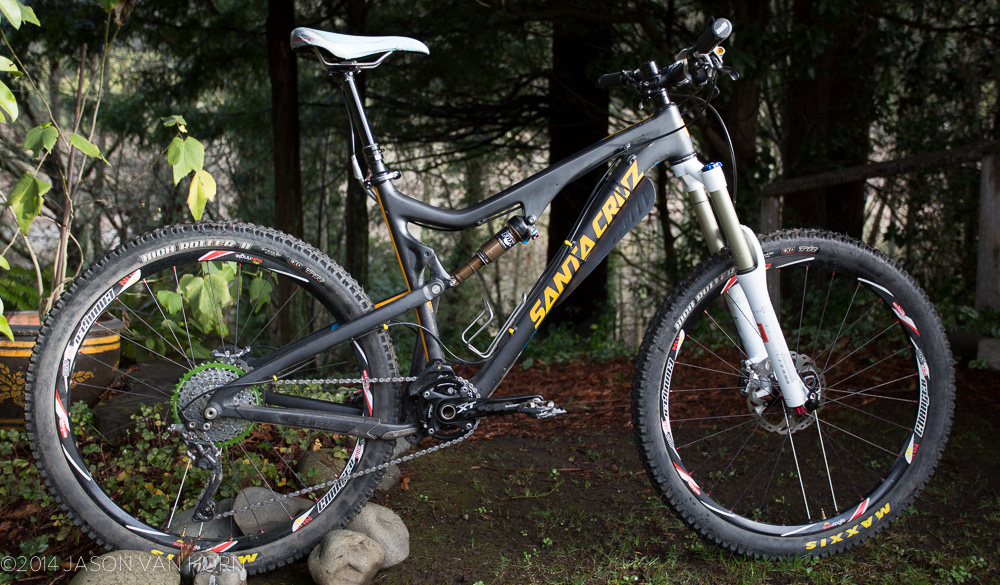 On the trail, the biggest change I noticed was the additional effort of shifting against the clutch. I hadn’t realized how much I’ve been utilizing the front derailleur, and now that I was limited to the rear shifter, I noticed my thumb was getting a bit sore. (It doesn’t help that I sprained it months ago) In fact, I ended up flipping the clutch lever to off more often, and especially for rolling smooth trails. Since I elected to run a chain guide, I didn’t experience any issues with the chain coming off.

Since going ten speed, I’ve been finding myself clicking shifts two at a time. I didn’t experience any issues here, or shifting in and out of the 42, other than an occasional slight delay under power. So far, my only gripe is the slower shifts to higher gears when wanting to pin it down hill. It isn’t the fault of the cog but a result of the b-tension screw extended all the way. The derailleur  wasn’t designed for this range, and the reality is it isn’t functioning at its best.

The OneUp Components cog works quite well, and I didn’t have any problems with it on steep sustained climbs. 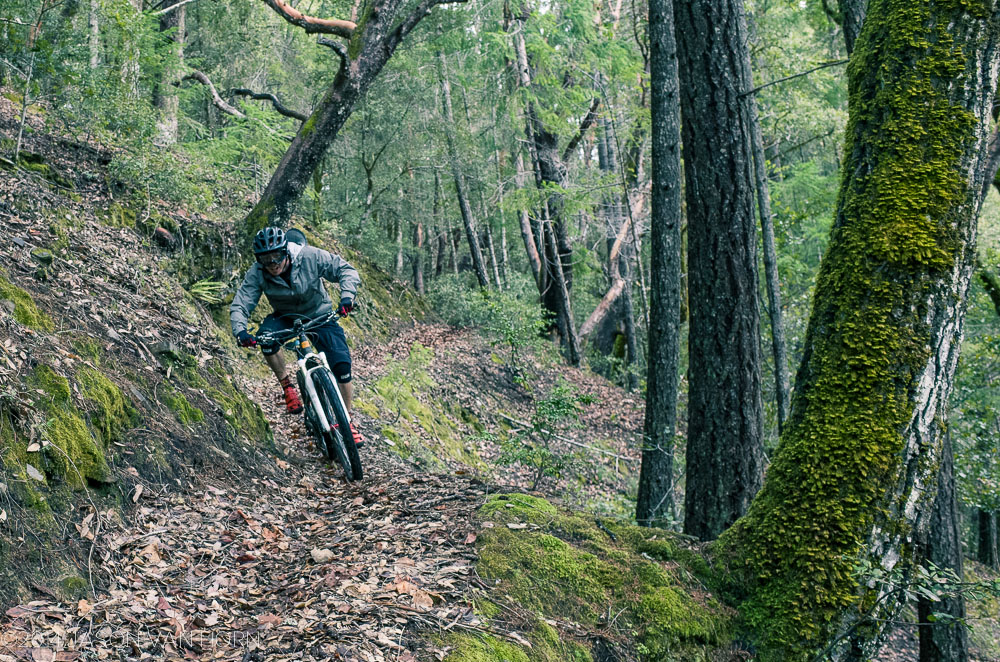 My bike’s so enduro now. At Tish Tang, somewhere in Northern California, about an hour east of Arcata.

After battling a cold and our recent bout with rain, I’m feeling crappy with almost two weeks off the bike, so my first day of climbing with the new setup felt a bit rough. My initial ride was at the Paradise Royale Trails in the King Range, and it was a day with a significant amount of elevation. It wasn’t the best day to start off with a new 1x drive train. However, our next day of riding consisted of shuttling downhill trails, and the setup worked awesome. Although the bike was caked with grime, I had no issues with shifting, just good times.

I’ll be updating this post for the next few weeks with additional ride impressions.