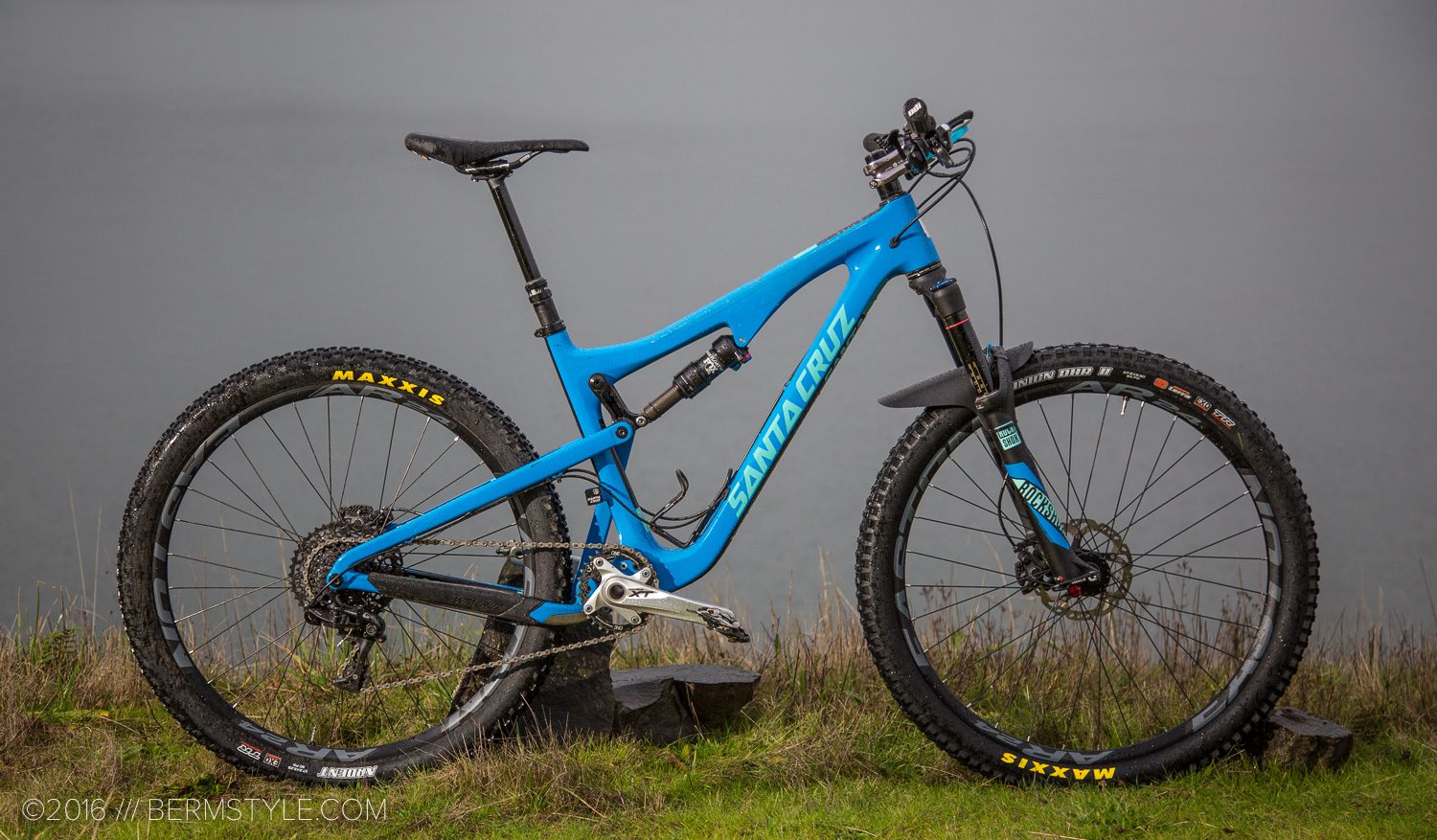 According to surveys, the average rider will spend anywhere from $3,000 to $4,000 on their next trail bike. That’ll net you a bike with name brand suspension with basic adjustability and solid components. At this price point you’ll choose between an alloy or carbon fiber frame. Choosing alloy will pay off with a higher quality parts spec; choosing carbon means sacrificing the level of spec for the more expensive chassis. If you’re looking to end up with premium suspension with the ability to fine tune settings on the fly and upper end components, you’ll need to drop twice almost twice as much — closer to the $5,500-$6,000 range.

Yes, for that much you almost can buy a new motorcycle. That argument is a silly one though, as you’d be getting an entry level bike. Brand name suspension and brakes will set you back much more in the moto world. No matter how you cut it, high performance, top level gear will cost you. There’s no two ways around it.

It’s common to see riders complain about inflated pricing, but the reality is that a $3k mountain bike works pretty damn well. The more you can spend, the lighter it’ll get, and with the minimal heft comes added performance. One term you’ll quickly become familiar with though it “the point of diminishing returns”.

If you have riding buddies rolling out on top dollar rigs, there’s bound to be some bike envy. Upgrading a $3k bike is never cost effective in the long run, so how much should you spend initially to avoid buyer’s remorse down the road? 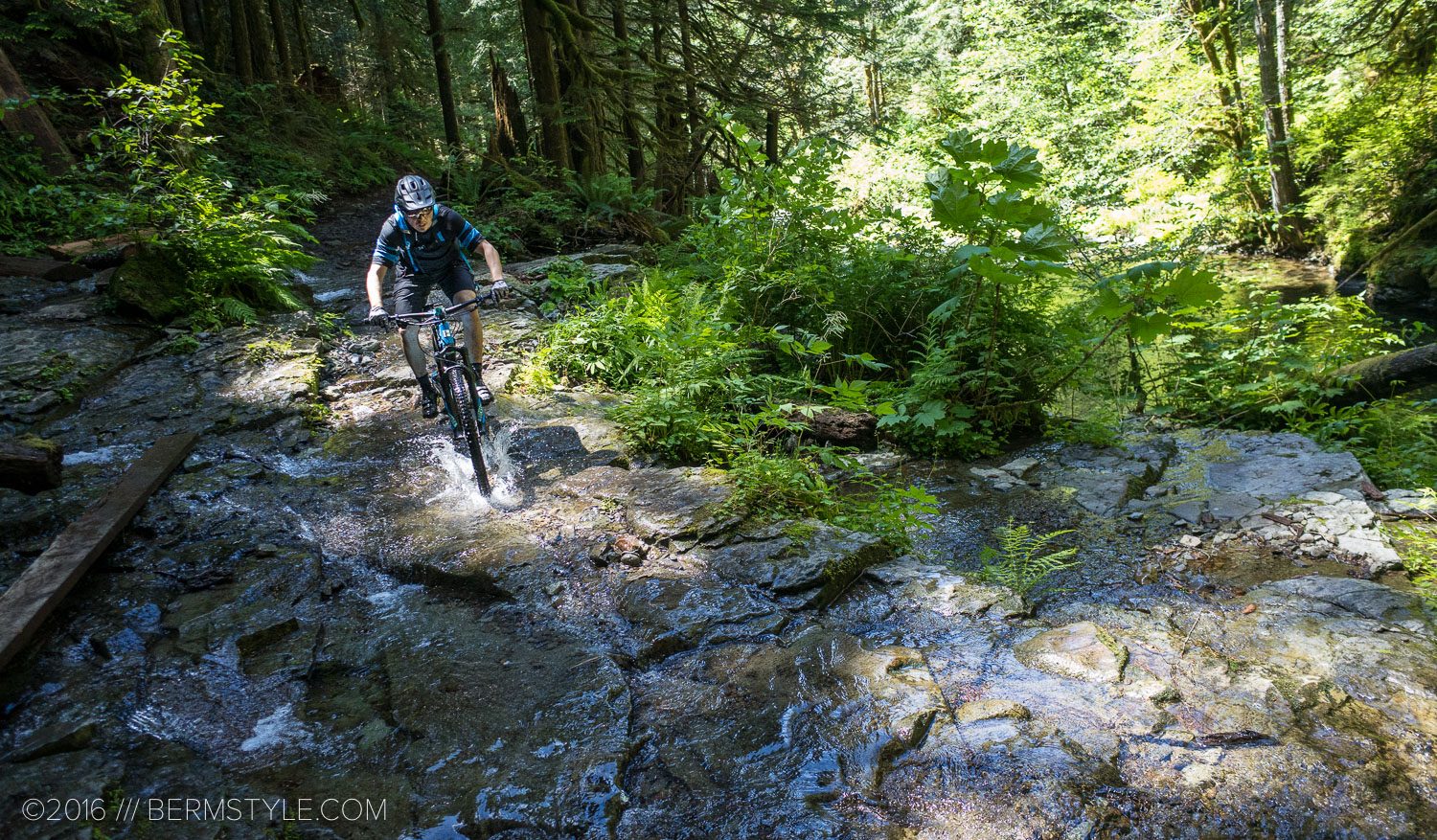 The 5010 Carbon S build costs way less than the 5010 CC model, but weigh several pounds more. Once you’re geared up on the trail though, its all relative.

That was the question I was facing when it came to purchasing a carbon fiber Santa Cruz 5010 — a 5″ travel full suspension trail bike. When I was ready to pull the trigger, I was faced with a few options:

I chose to purchase the lower cost Carbon S model as described in the post, “2016 Santa Cruz 5010 2.0 Carbon S – the Everyman Build“. My plan: upgrade the bike in bits and pieces to see if I could match the performance of the top shelf rig at a fraction of the price. There was one catch though, which I didn’t become fully aware of until later. The price oriented “C” carbon frame, which matching the durability of the top shelf “CC” frame, (seeing as how it uses more material, it potentially could be stronger) is far heavier than previously suspected. Frame weights aren’t specifically mentioned in manufacturer’s materials, but it is alluded to that the frames are about 1/2 lb heavier. The reality is that real world weights put that closer to a full pound. 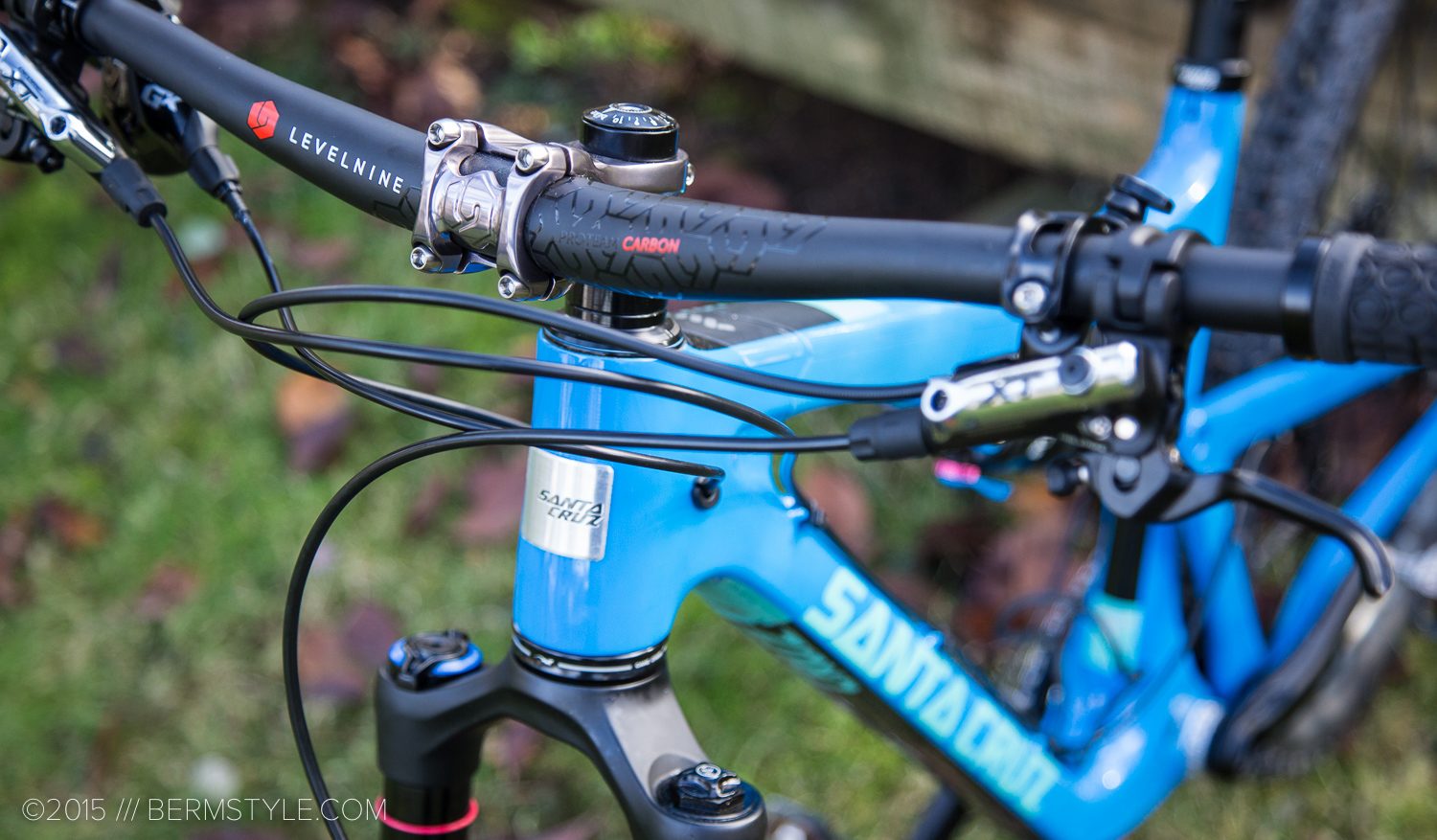 Unless you crash a lot or are hard on gear, carbon bars are an easy way to reduce the heft of your ride.

In hindsight, part of me wishes I had gone my usual frame only route, and built up the bike a piece at a time. Buying a complete is generally the fastest way to get on the trail, and to be honest, I wasn’t sure if the lighter CC frame was worth the premium pricing. My other hesitation? Resale value. It’s difficult to get your money back from your investment when it comes to top end gear, especially in the weaker resale market here in the northwest. (in comparison to the Bay Area second hand market)

Knowing the real weight difference is closer to a full pound changes the value equation; investing in top level parts for the less expensive frame doesn’t make sense if you’re trying to match the CC model over time. Shoppers looking for top level performance in terms of weight, you’re better off just going for it at the register at the start. If you’re planning to ride a frame for several years and upgrade it over the long haul, it can be worth it to spend more initially.

However, I made the call, and so the diet began. So what parts do you upgrade in order to maximize performance? 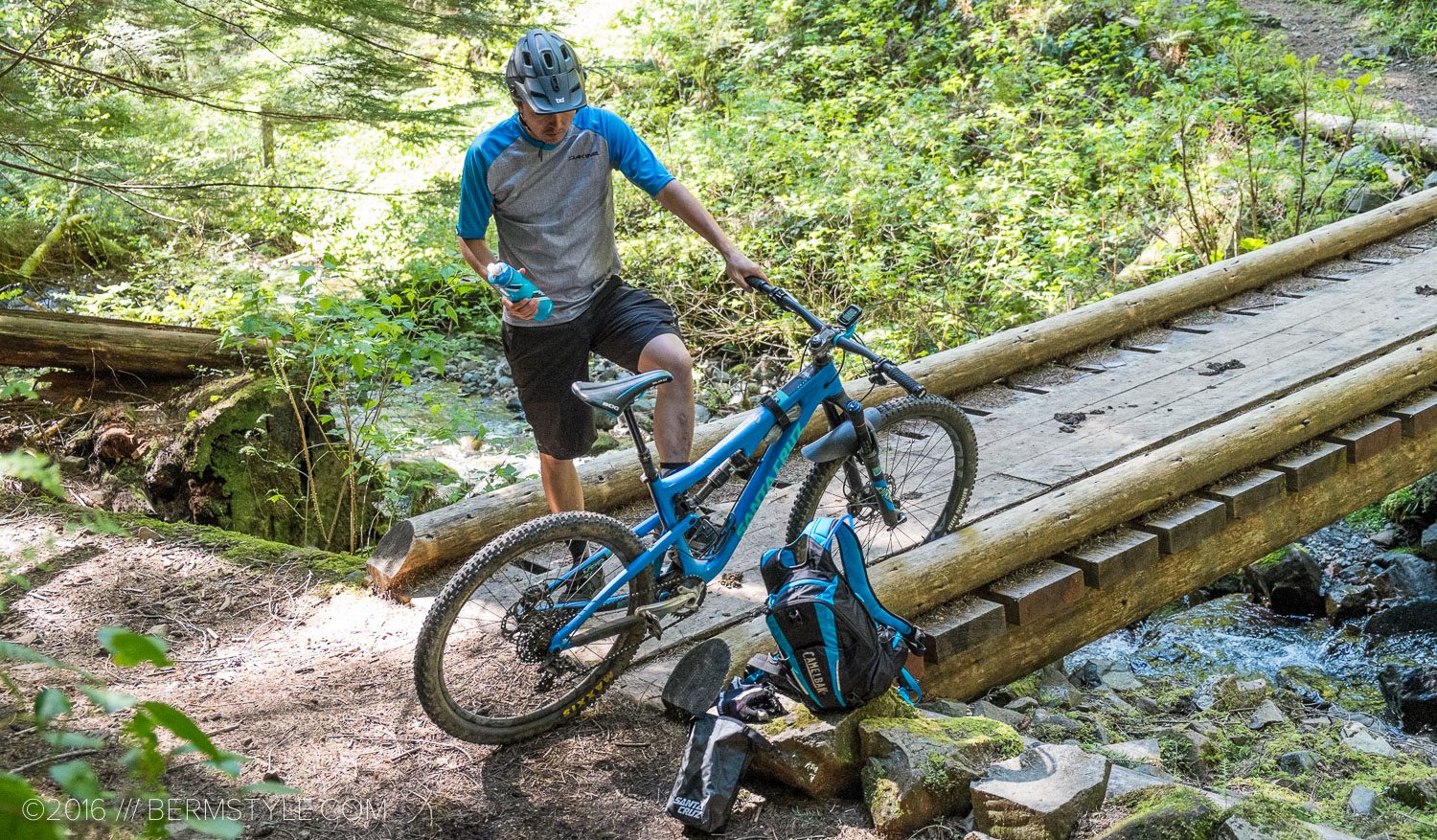 Contemplation at Hidden Falls, on the Tarbel Trail in Washington.

I began with the contact points, swapping out the stock saddle, stem and bars. If you are unsure of your fit, I’d avoid going top dollar on stems or saddles. Saddles are a personal choice and we generally recommend trying a number of different models until you find one you really gel with. Once you have a favorite though, swapping it out for the same model with titanium or carbon rails can save a good amount of weight. For the most part, the same goes for handlebars. (Unless you’re a frequent crasher) I swapped out the bars for carbon models, as well as the stem, for a lighter weight alloy model from a company called Level Nine. They never really took off here in the states, but I had some early production models to test out, and are similar to products from Syntace.

The 2016 5010 Carbon S is a very well spec’d bike; everything out of the box works extremely well, and you get a solid package for your money. However, aside from the Rockshox Reverb post, every component on the bike is a lower cost version of what you’ll find on the top level model, including the brakes. The question you’ll want to ask yourself: why upgrade it? By the time you replace the rear Fox shock, upgrade the Pike damper, change out the component group and wheels, you’ll still have a heavier frame. 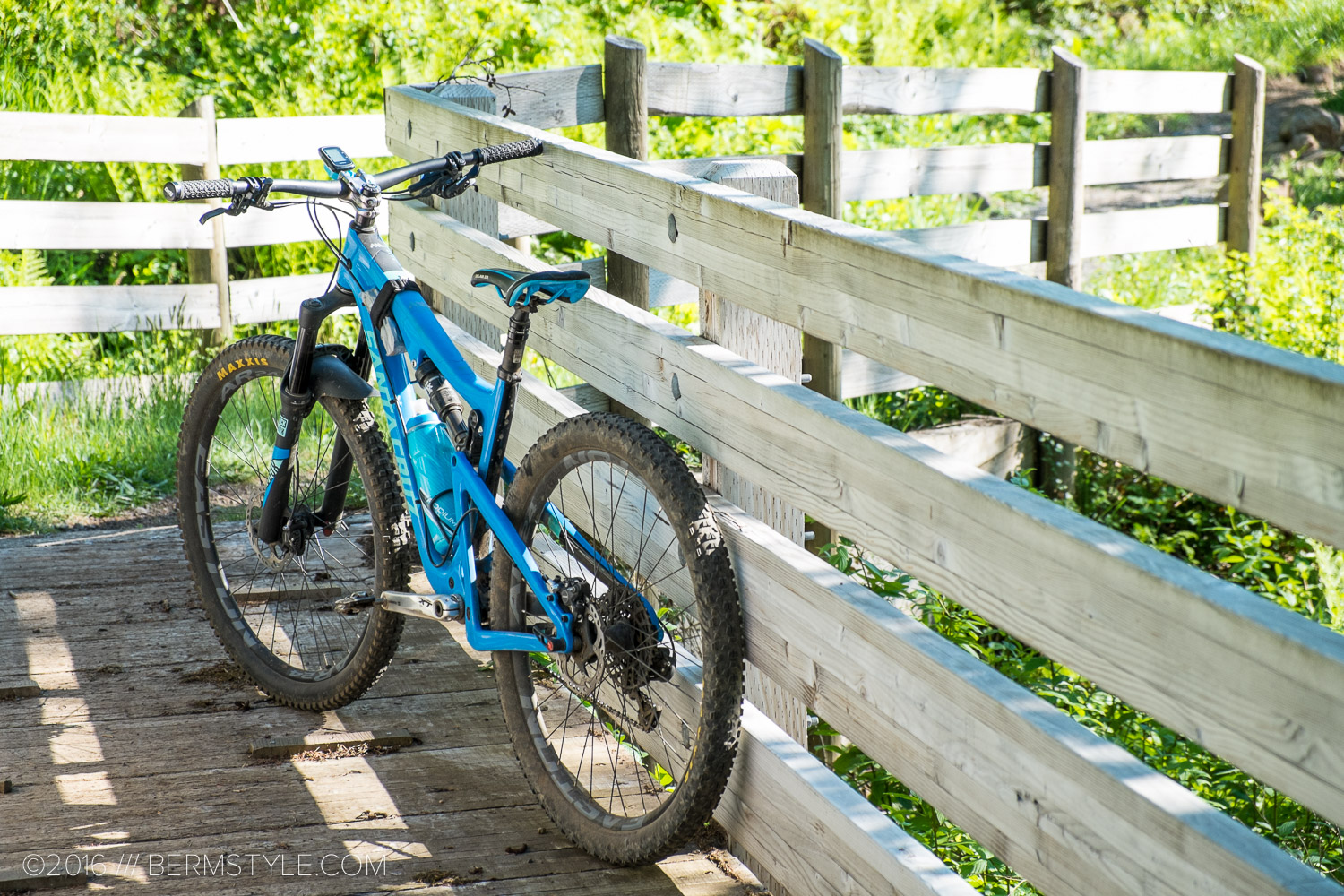 For me, it came down to personal preferences. I’m a fan of the stock Shimano SLX hydraulic brakes, as they’re possibly the best brake for the dollar you can buy. I have a strong preference for the lever feel of Shimano’s stoppers, and ended up swapping out the SLX models in favor of XT. Not that the XT models are much lighter or perform that much better, but because they’re favorites. They’re also discontinued, which means you can find them heavily discounted. I also added a OneUp components Traction Oval Ring as detailed here. I wouldn’t consider it a huge upgrade, but we like them. If you’re shopping for a new ring, we recommend giving it a try.

I followed similar logic when it came to cranks, swapping out the stock Raceface Aeffect crankset (785g without bottom bracket) for lighter weight XT M785 cranks that weigh in around 810 grams with bottom bracket. The silver model holds up the best, as black cranks get scuffed up quickly. This didn’t save a ton of weight though; it was simply because I had them on hand. To maximize weight loss you’ll want to look into lighter options.

Though I’m fond of both the Pike fork and Reverb post (when its working properly) I haven’t been the biggest fan of SRAM components, preferring Shimano. The stock GX drivetrain worked very well though, and if I was to replace any element of it, I’d swap out the shift lever, as I miss being able to downshift several gears at a time, a feature only found in higher end shift units. The bulk of the weight with the budget SRAM drivetrain is the cassette. It’s also a wear and tear item, so the trick here is balancing how much you’re willing to spend on something that will only last about a season of riding. 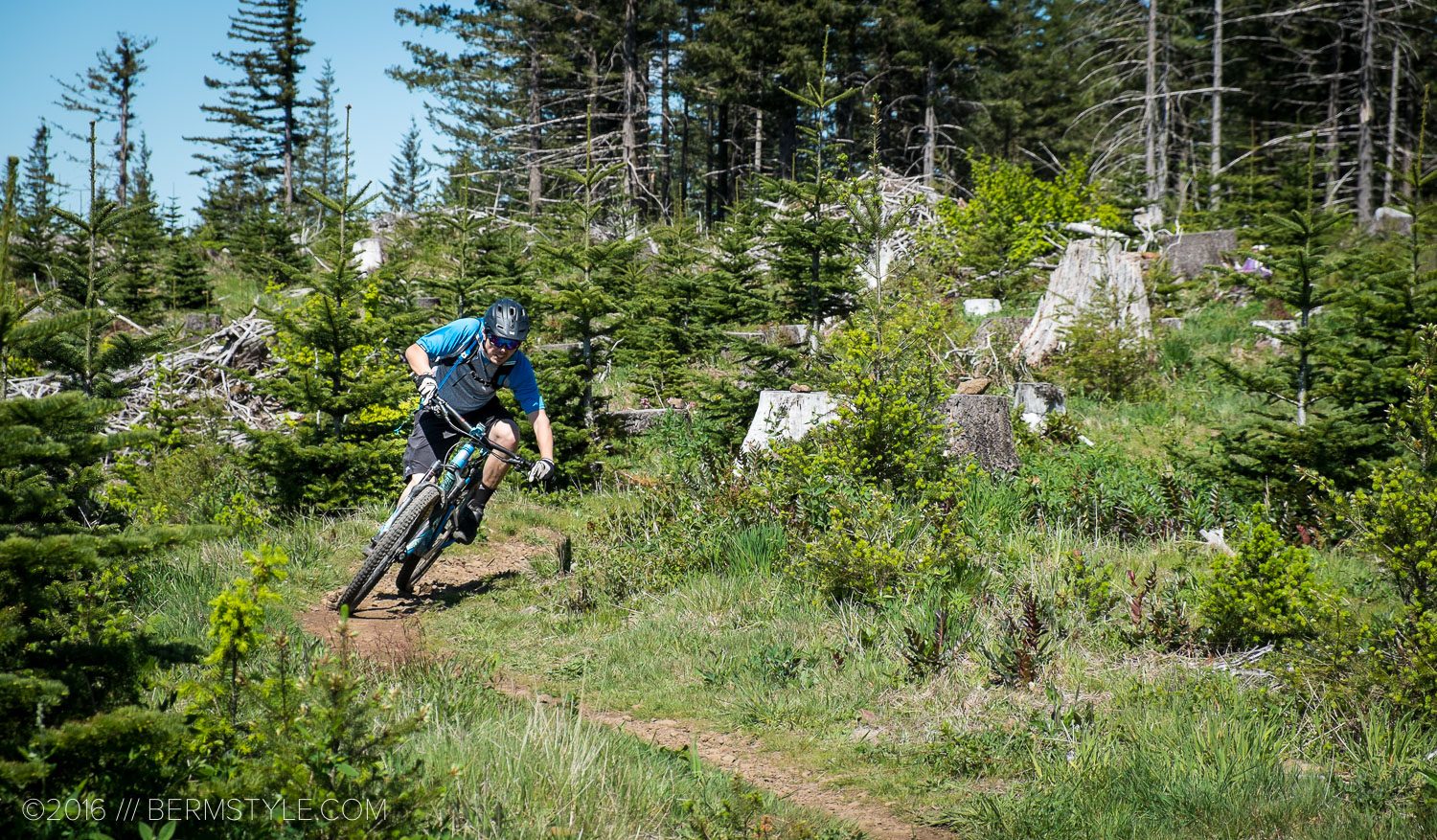 Other than cockpit, my plan was to invest the bulk of my upgrade dollars in the wheels. My bike was one of the initial boost equipped bikes though, which paired a non-boost front wheel with the boost rear wheel. This limited my options for upgrading investing in a mismatched wheelset, or swapping out the Pike fork for a boost model in order to have the best options – with top dollar wheels running in the $2k range, its a significant investment.

In the end, I decided that other than a few minor swaps, the 5010 was going to be as good as it got. The wheels and tires are solid, and suited my preferred riding style. Sometimes you’re better off just riding what you have and replacing things as you go, and saving for your next ride, a few seasons away.